Today we've got a special treat from a friend! I know her as Mrs Gayla because she was my Mom's friend growing up.
It's a Collin Street Bakery Fruitcake! 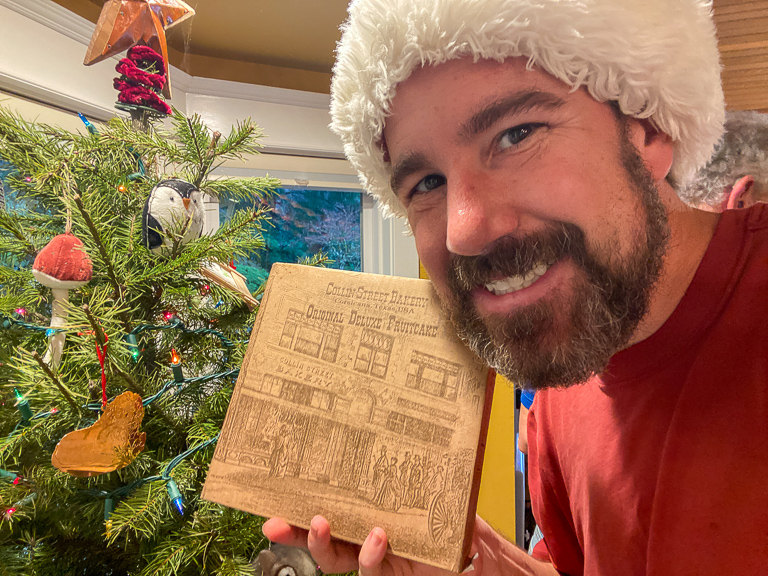 Collin Street Bakery started back in 1896, and they're famous for being the first mail order fruitcake company in the world! 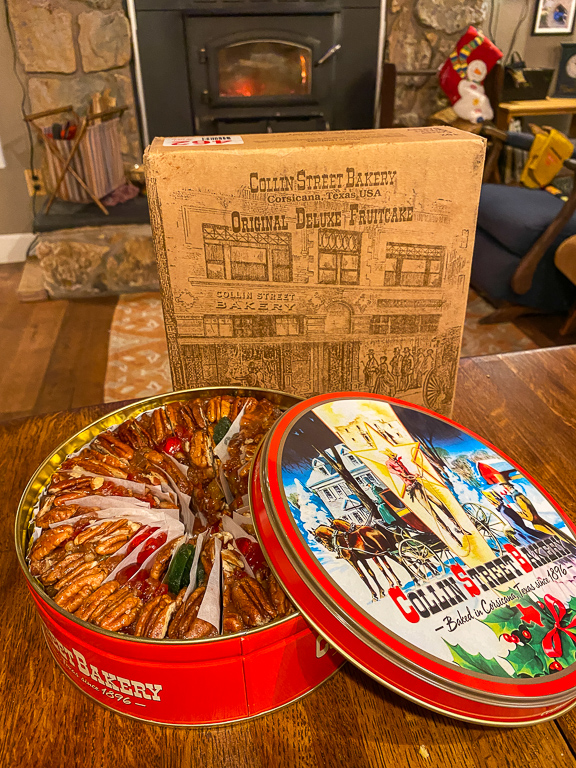 Recently we tried the new Mountain Dew flavor FruitQuake soda, which is fruitcake flavored Mountain Dew. When we tried it, we bought a cheap fruitcake from Walmart to eat with it. My brother bought one from Target and neither of us loved the fruitcakes we bought. Megan said it was like soggy raisin medicine. At best we thought it was okay.
Hearing this, Mrs Gayla reached out and asked if we have had a Collin Street Fruitcake. We never have, but I was hesitant to buy one. That's when she offered to buy us one and have it shipped! 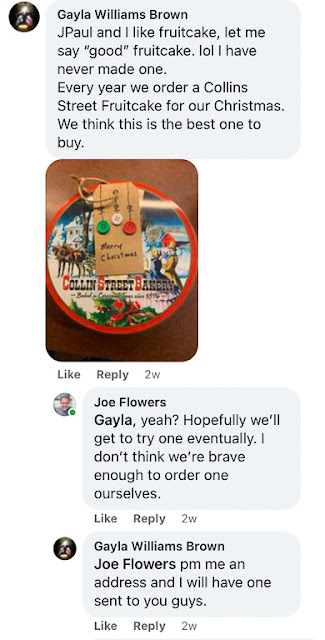 Aww, that's so nice of you! Thank you Mrs. Gayla!
So, knowing we'd be heading to Washington to be with my whole family, I asked her to ship it there, where we can try it with 17 different people! Perfect! 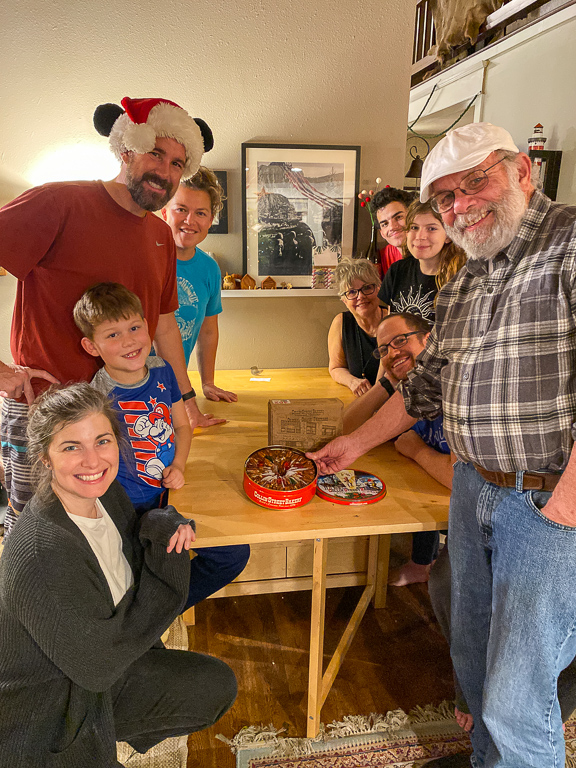 Each year, Collin Street Bakery sells 1.5 million fruitcakes, and fruitcake accounts for 98% of their overall business! 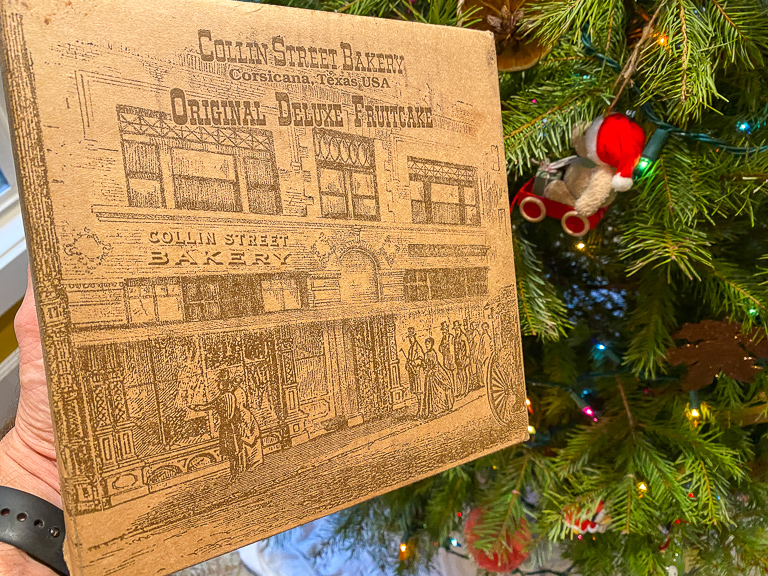 Inside the box, a tin container housed a hefty DeLuxe Fruitcake that was nearly 3 pounds! 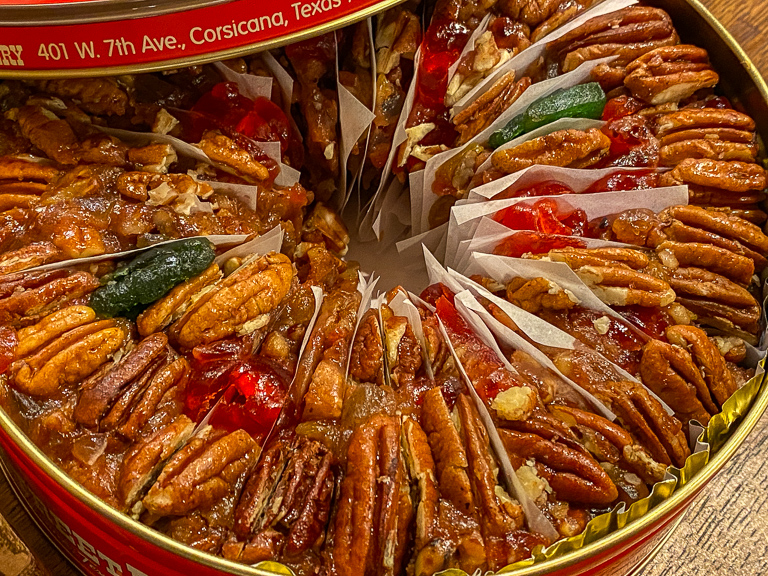 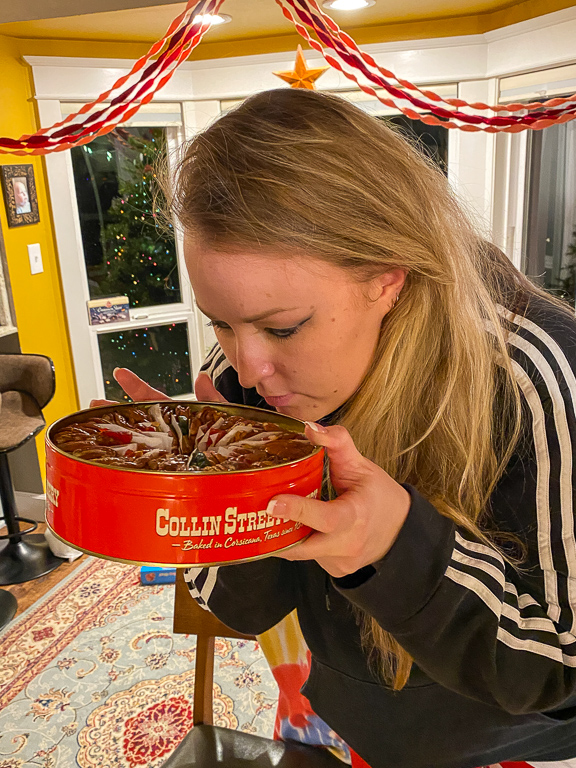 I don't know if it's standard or not, but I was thrilled to see that the fruitcake was pre-sliced!
And look at all those toppings! The first ingredient is Pecans and the second ingredient is Cherries! Amongst all the other ingredients you need for a cake, there's also Pineapple, Raisins, Honey, Papaya, and Orange Peel.
Theresa - I like the pre-slicedness. (is that a word?)
Tom - Yeah, that's good for a crowd. For mine though, I just need to put a fork in it. (Tom really likes fruitcake) 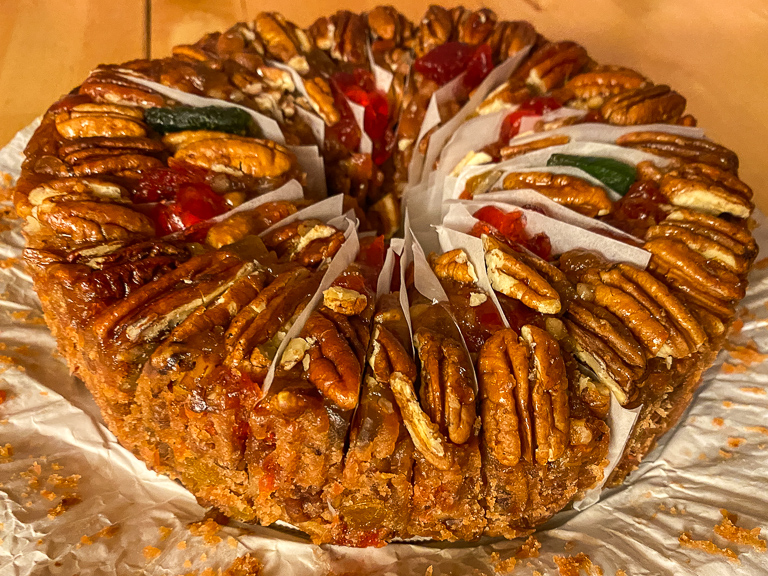 With this many people, everyone is sure to have an opinion, and fruitcake doesn't have the best reputation. Let's so how it goes. 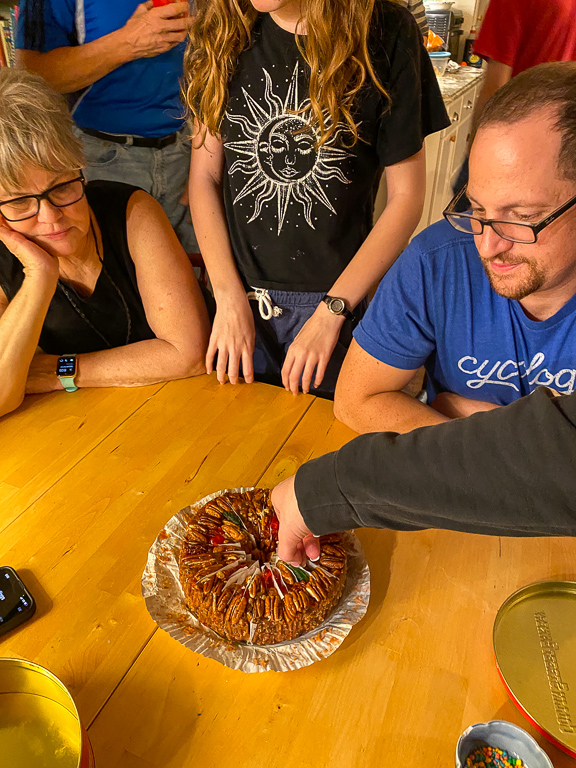 Theresa - This is mostly nuts!
Actually according to the website, it's 27% Pecans! 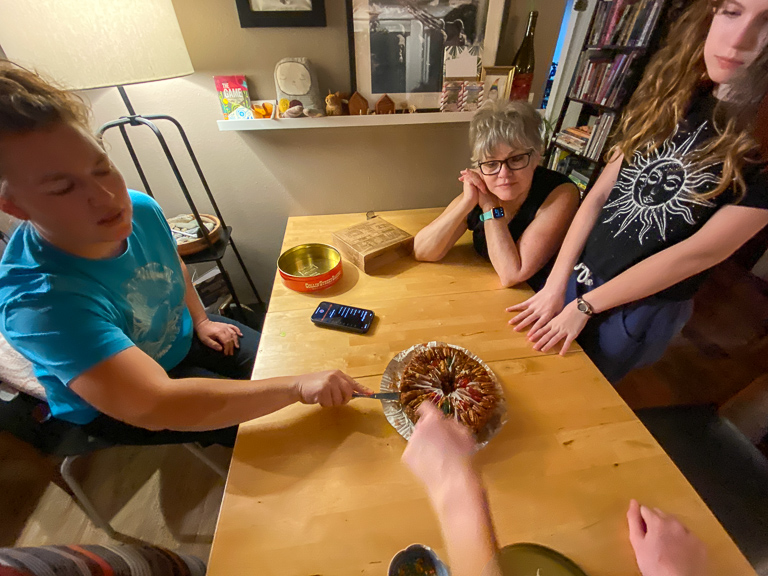 Grab a slice!
Patrick thought the fruitcake they got from Target was okay, but this one was much better.
I liked it a lot more too. It's really like a Pecan Nut Cake.
Patrick - It's a similar texture, but it's a much better flavor.
Megan - I don't hate the texture of it. 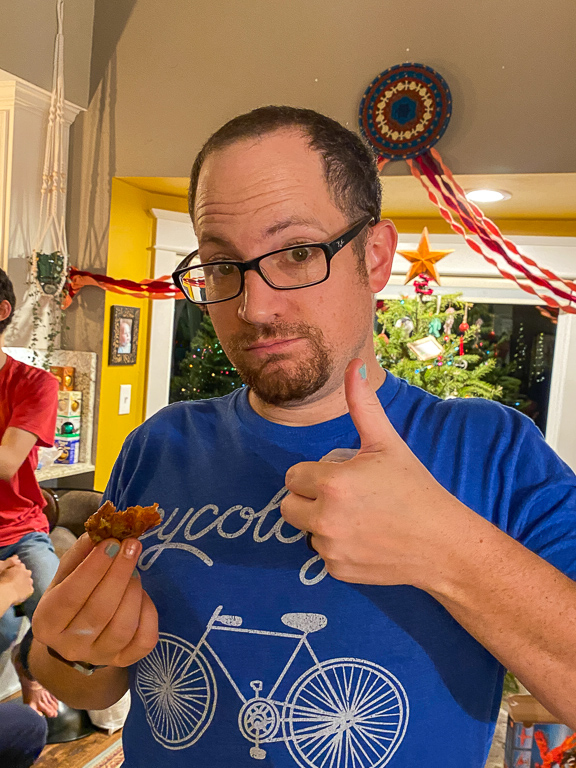 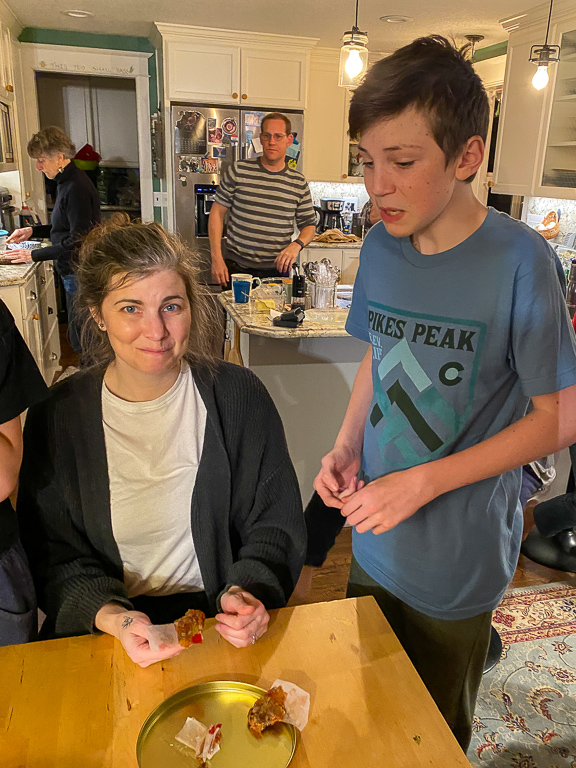 I think it's safe to say that Isaac isn't a fan of fruitcake.
Patrick - These fruitcakes last forever. The front of the tin says this one is over 120 years old!
Actually it says "Baked in Corsicana, Texas since 1896." SINCE 1896, Patrick. 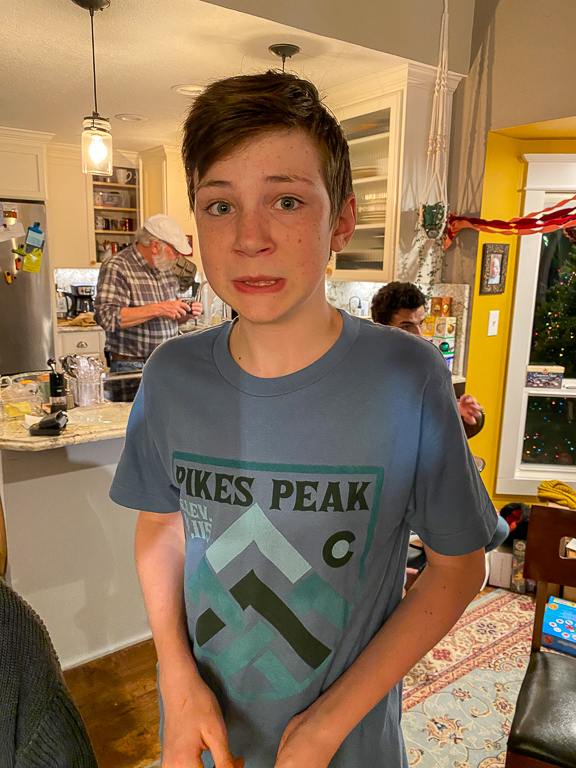 Tom (Jess's Dad) likes all sorts of fruitcakes!
Theresa - Tom is making lots of happy noises.
Tom - I love fruitcake. That's good! That's good stuff.
Jon - I'm trying to catalog this based on all my life experiences. I can't categorize this. I don't know what it compares to in my life that I've ever tasted.
Megan - It's like a mix between fudge and cake, but it tastes like nuts.
Theresa - Fudgy nut cake?
Jon - Soggy oatmeal? Soggy oatmeal with nuts on top. 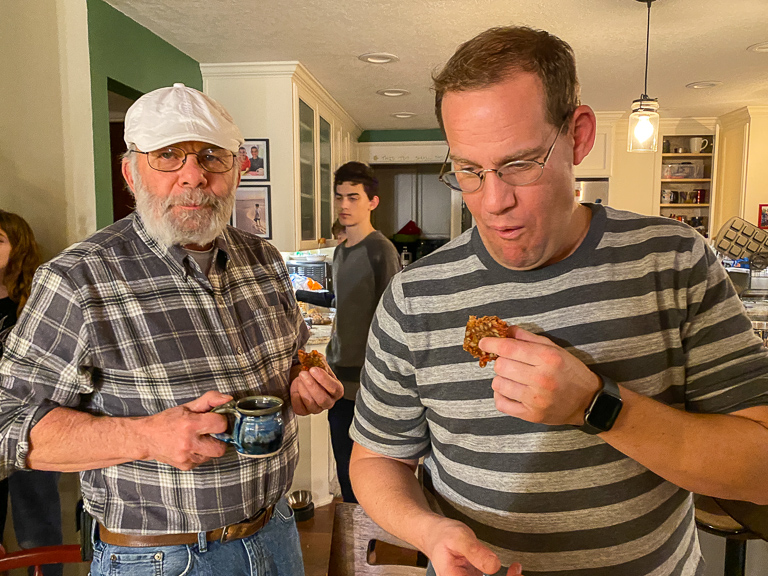 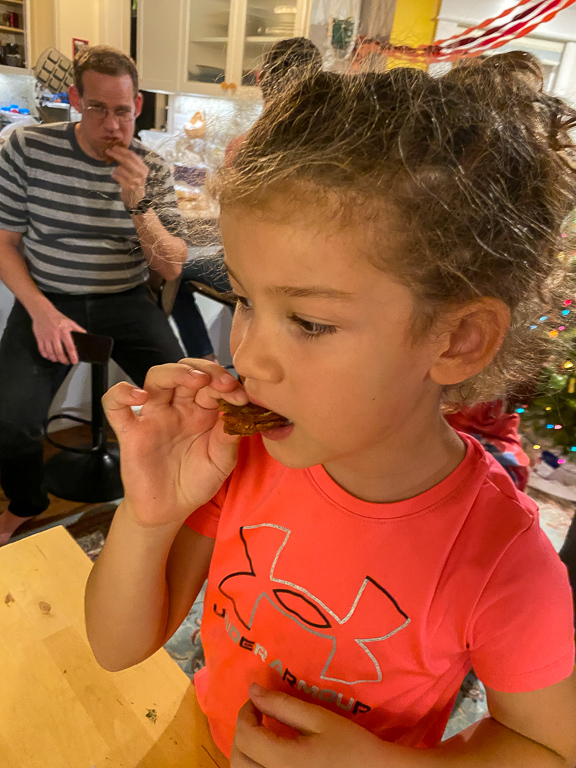 One things these cakes are not is low calorie. This cake has 30 servings, with this 1.5 oz slice equaling a serving. This small slice of cake has 200 calories! The entire cake has 6000 calories in it!
Jon - These are way better than those old school power bars. 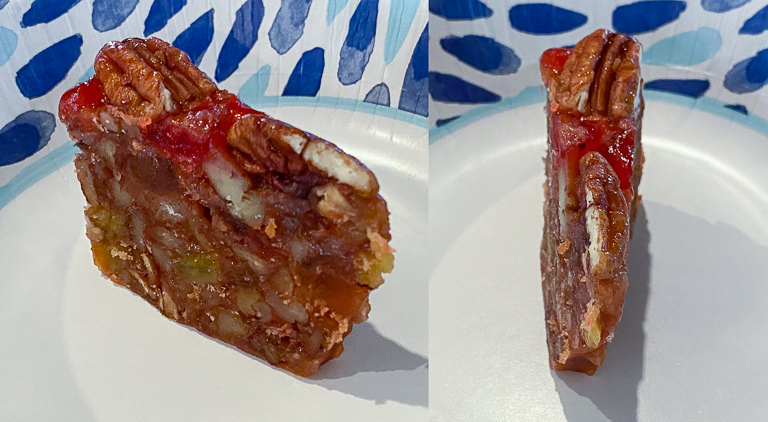 And unknown to me, Dad has brought with him a North Carolina Ice Box Christmas Cake.  He made it in Colorado, brought it onto the plane with him, and has had it in the freezer here for us to taste.
I asked him to write up his thoughts and memories about it.
Mickey - I remember my Grandmother and Mother making these at Christmas time. They always fussed about how difficult is was to mix everything together.  I think they're traditionally made when pecans are ready each fall. As a kid (and still) I always looked forward to this seasonal treat - and often ate (and eat) more pieces than I should have… Aunt Helen used to put red AND green cherries in her ice box cake. People either loved it - or thought she went completely off the deep end messing up the simple, old fashioned recipe. I prefer RED cherries only.  My Mom would make them at Christmas time most years and send one to us. Aunt Helen asked me a few years after Mom died if I had made an ice box cake or if I’d had one since Mom died. I told her I didn’t have the recipe - and had NOT had one. She made me an Ice box cake for Christmas (red cherries only), and shared the recipe.
I ALWAYS associate Christmas and the taste of ice box cake - no matter what time of year I’m lucky enough to get a piece. 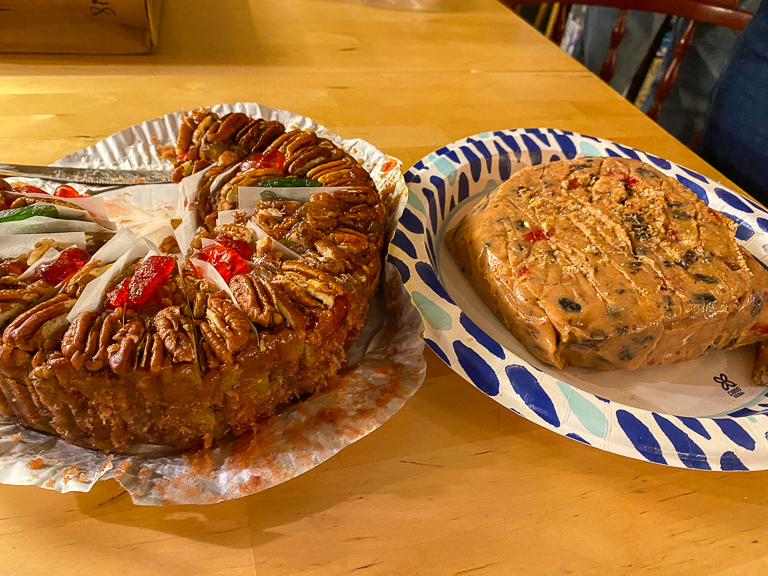 If you'd like to make this recipe yourself, here's the steps.
North Carolina Ice Box Christmas Cake (no bake)
Ingredients
One box graham crackersOne 16 oz bag marshmallows One 12 oz box raisins 16 oz raw pecansTwo cups sweetened condensed milkOne small jar maraschino cherries (red)
Instructions
Place marshmallows and condensed milk in double boiler; heat until marshmallows are completely melted.  Remove from heat.  Dice the cherries and add to marshmallow & milk mixture. Add raisins and pecans and mix thoroughly.  IF DESIRED, add leftover cherry juice to the mixture (totally optional - some swear by it; others would NEVER add the cherry juice). Crush graham crackers and add to the mixture. Mix THOROUGHLY (this step is hard - getting every graham cracker crumb coated). Mold into desired shape and cover with wax paper or parchment paper. Place in refrigerator at least 2 hours to set. Remove from fridge and slice pieces as you want them - return to fridge for storage.
I thought it had a bit of a cookie dough texture to it.
It was very sweet, and quite a bit different than the Collin Street Fruitcake. Some people liked it even better than the Collin Street Cake. 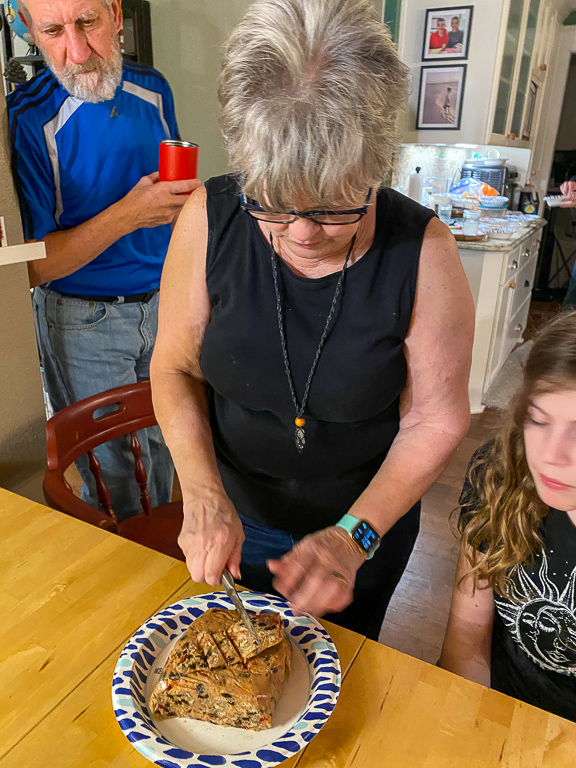 Well, I'm still snacking on a piece of the fruitcake as I write this one up. It's sweet and tasty!
When we finished our taste test, we all gave a big shout-out Thank You! to Mrs Gayla for sending it to us to try. Thank you!
And thank you Dad for making us your Mom's and Grandma's traditional recipe for their Ice Box Cake.
We might not all like the fruitcake, but it's fun to try and all eat together. 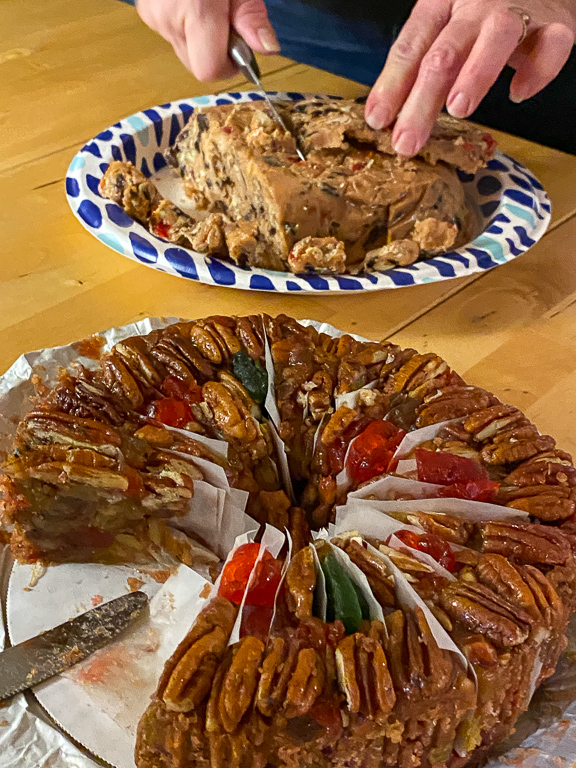