Let's continue the rest of our day here at Arches National Park. As you drive through the park, you see something that looks almost unbelievable. This massive boulder is balanced atop a much smaller column. 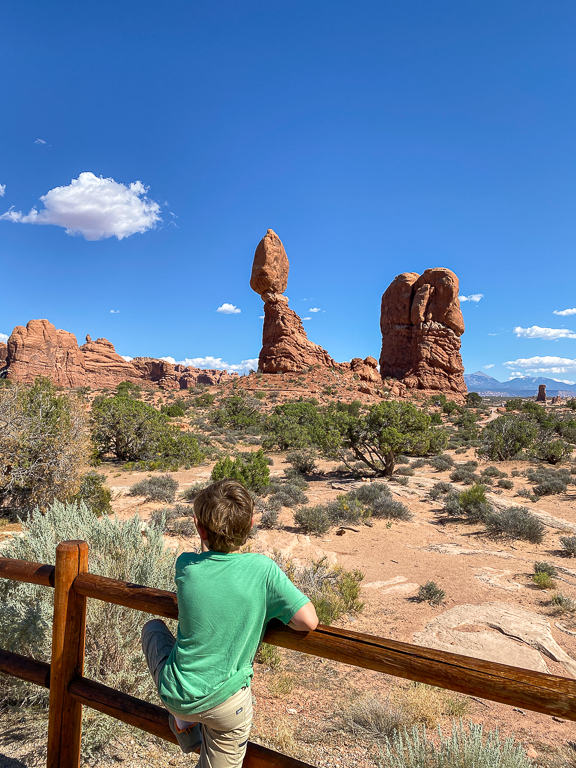 Erosion has eaten away at the rock underneath, leaving this giant stone seemingly floating in the air. 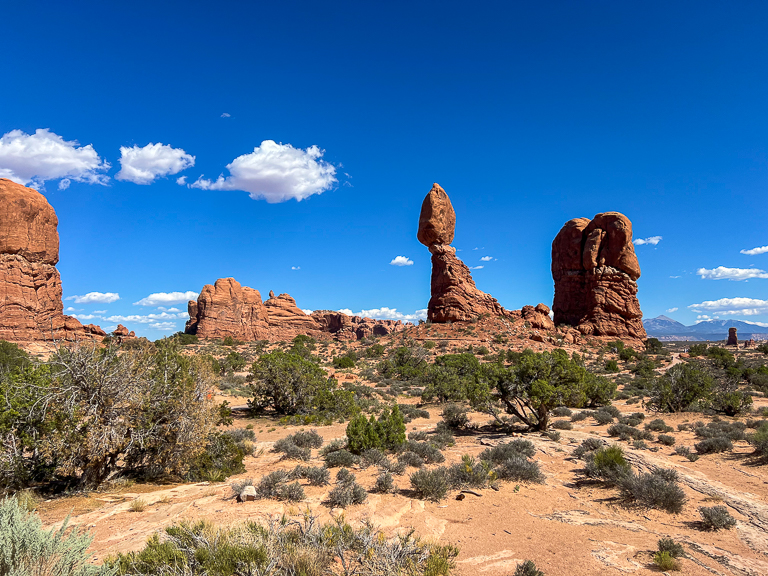 Ian commented that it looks a little like the Avatar world Pandora from Disney's Animal Kingdom (and the movie). 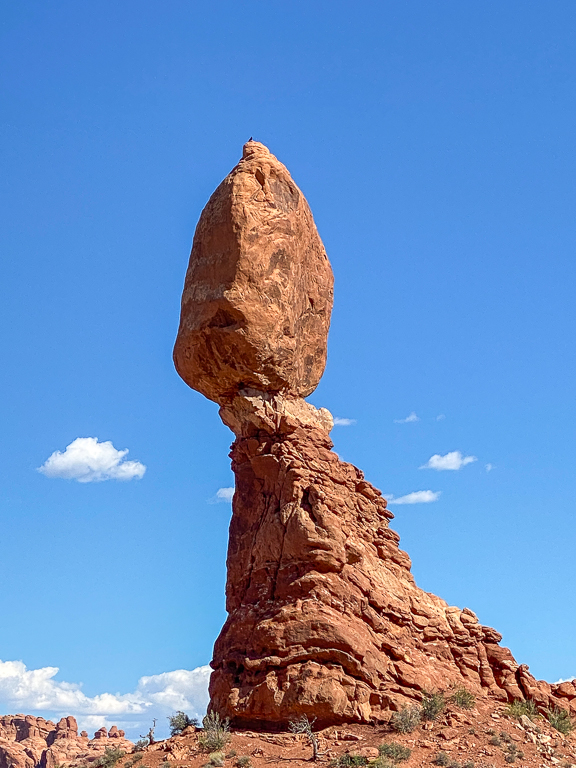 There's plenty more that we could explore, but it's already been a long and hot day. We've got a few more days here, so we don't need to cram everything in all at once. We headed back to the visitor's center to turn in the Junior Ranger books. These sculptures are cute, but let me tell you, they are blazing hot. 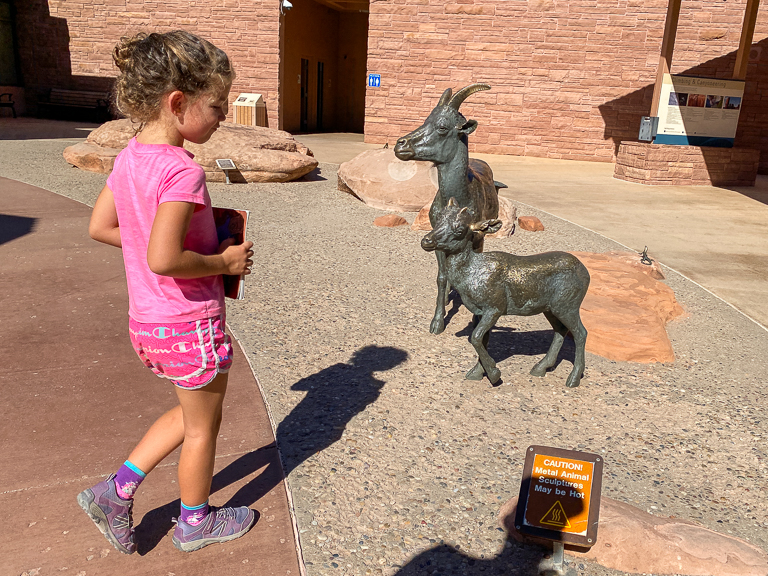 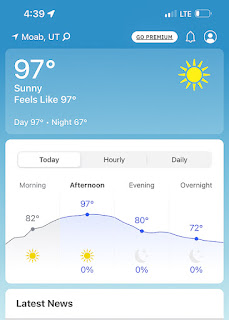 Inside, the kids got their books checked out. 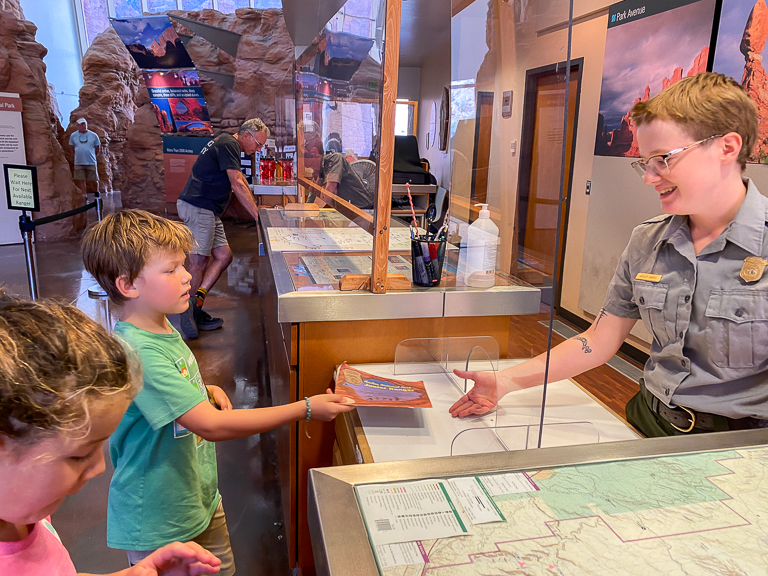 And say their Junior Ranger pledge. 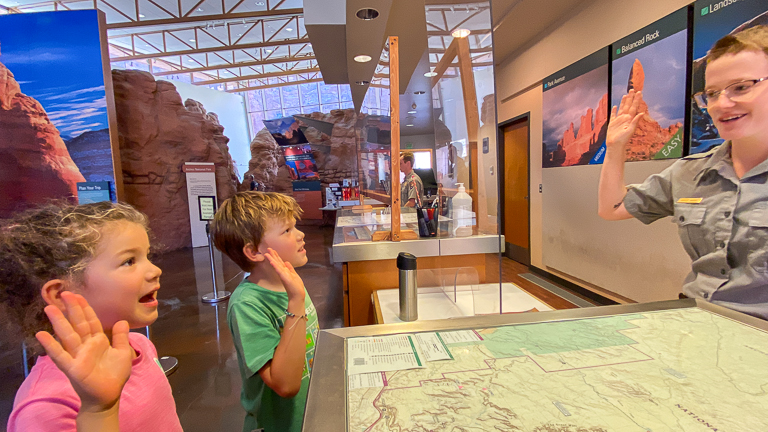 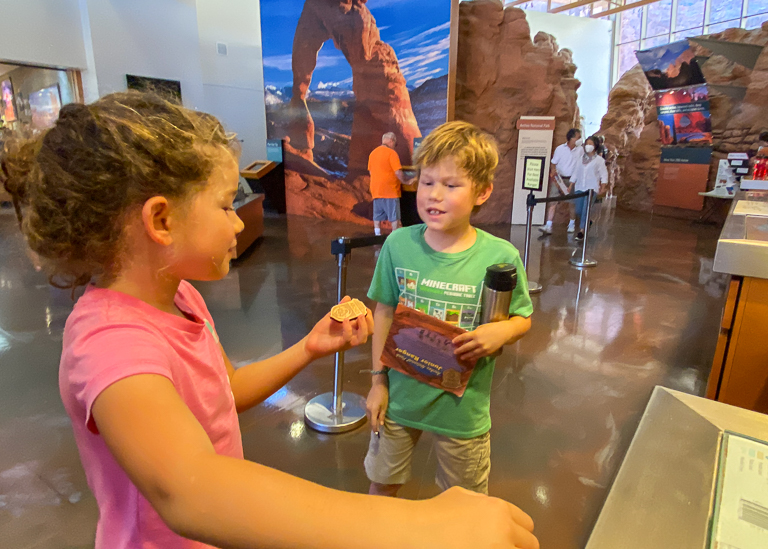 You know, not all the badges are 100% perfect. Ian seems to get his fair share of blemished ones, and he's started to want the ones with more character. It's different than all the others.
I like that it has a picture of Delicate Arch on the shield. We'll be going there later in the trip. 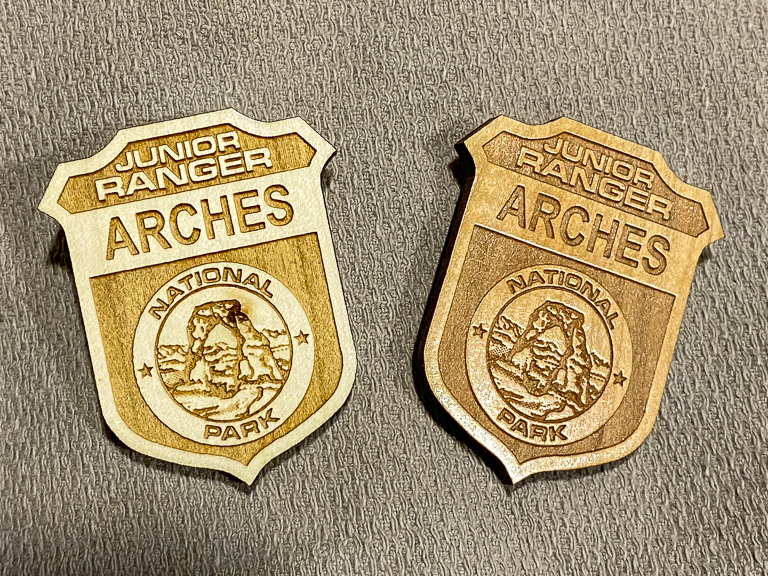 Inside the visitor's center is a museum. They did a great job on the rockwork inside. 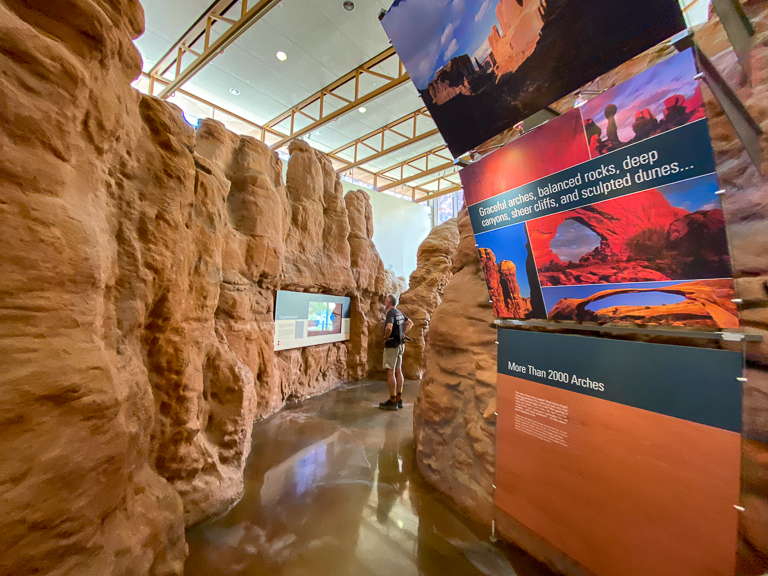 Ooh, a grasshopper mouse exhibit. Alli thinks they're so cute. 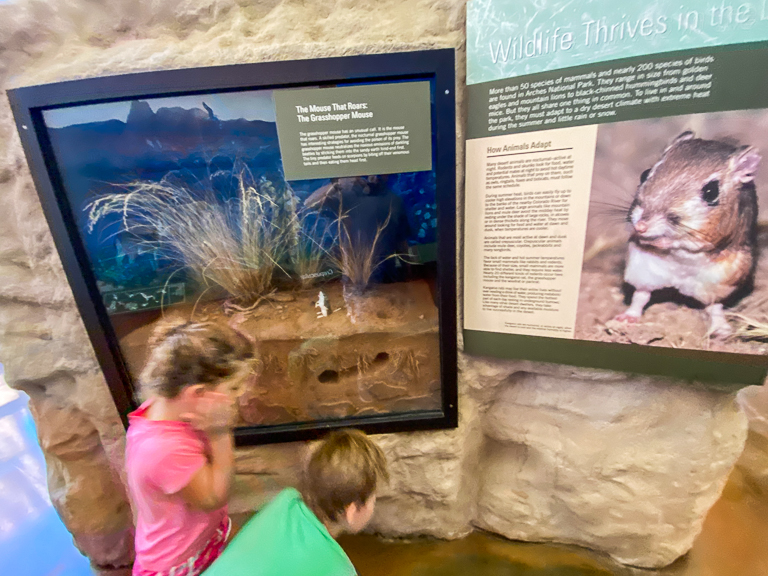 A bunny too? The kids are always like to see the different stuff animals available at the gift shop. 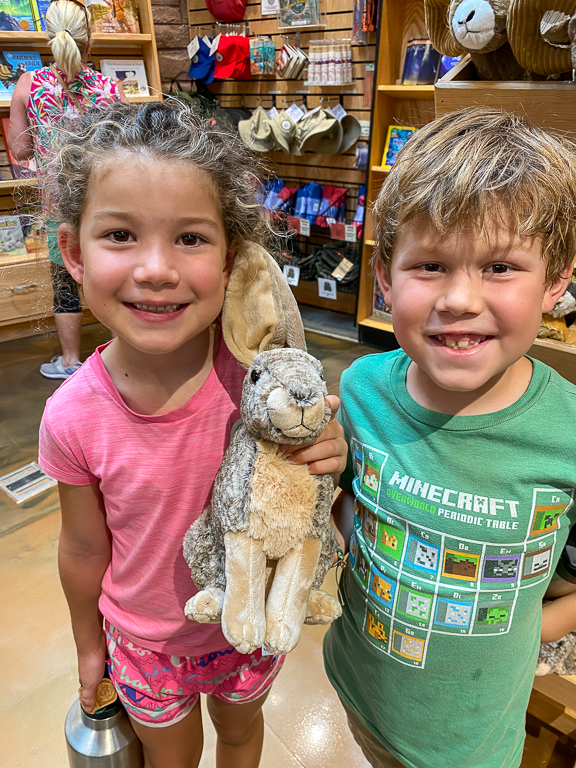 While we were inside, there were multiple announcements that a Ranger activity would be taking place outside shortly. The kids were excited to go see it. I was happy that it was in the shade!
Ranger Corbin is leading a group here and we're learning a little bit about the Native Americans who once lived here. He showed us petroglyphs that were made in the rocks nearby. 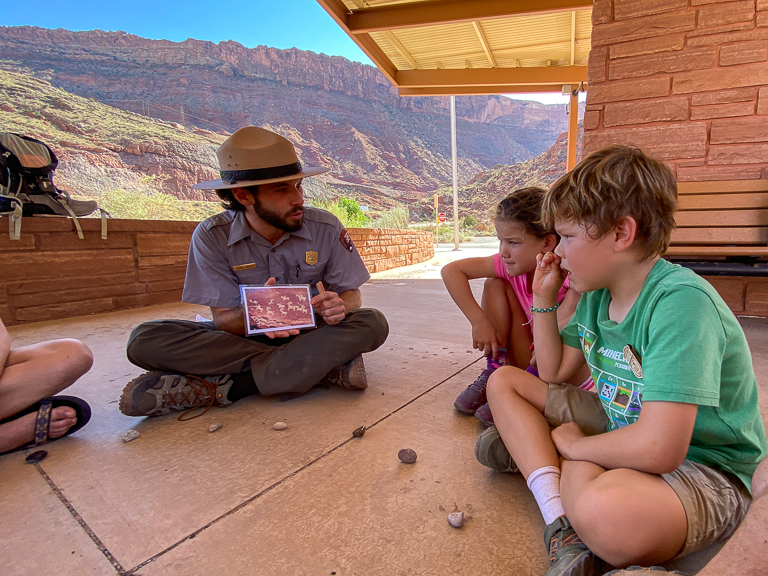 And then he invited us to play Navajo games. Our first game is something you can play with just the things you can find outside and gather. It starts with 3 sticks, one side is colored and the other is not. A circle is set up with rocks and markers are used for each player.
Each person tosses the sticks and you move a space for each colored stick facing up, so 1, 2, or 3 places. If however you get 0 colors facing up, that's special and you get to move 5 times and take an extra turn! 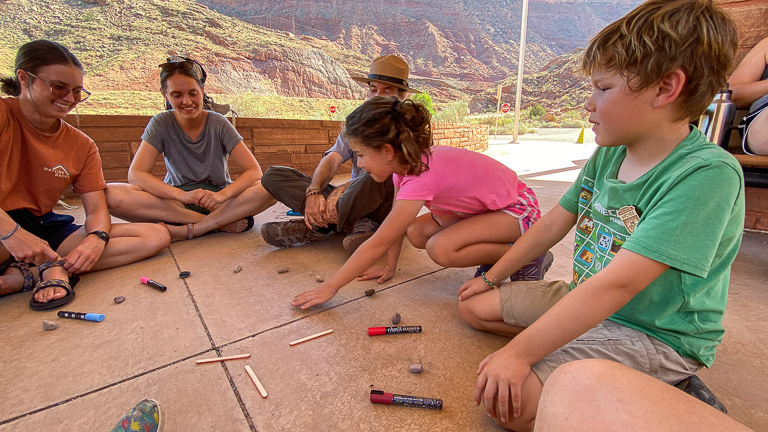 The rules printed out. 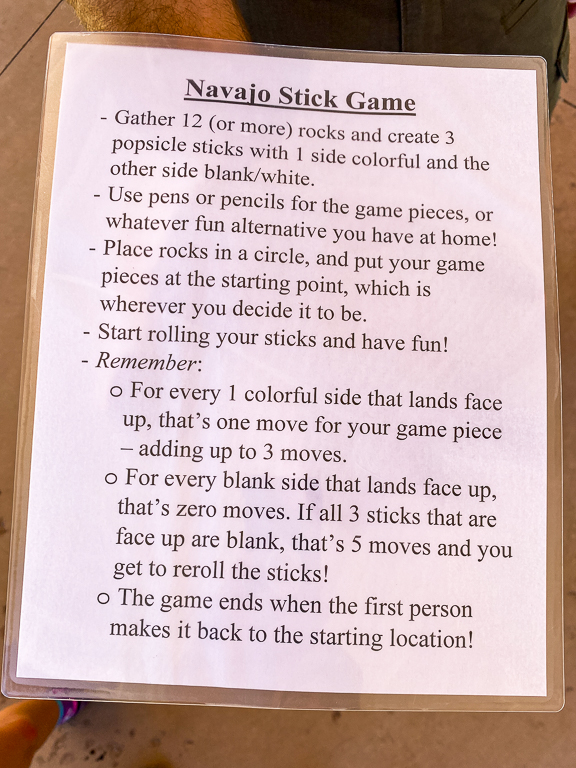 We went around the circle, taking turns tossing sticks. Alli and Ian usually have good luck with these sorts of games, but today fortune favored me! After a couple rounds, I got 0 colors and moved 5 spaces, then on my extra turn I got 0 colors and moved 5 spaces again! I had a commanding lead over anyone else on the board. So much that whether on purpose, or by accident, Ranger Corbin skipped me on a turn! I was so far ahead, I just let it go. Well as luck would have it, Alli caught a streak and would catch up quickly! It came down to the last rolls, and Alli just snuck in before me.
One other game Corbin wanted to show us was a racing/juggling game.
Corbin - Does anyone here know how to juggle?
<me thinking> - "my time has come!"
I grabbed 4, yes 4 balls, and proceeded to juggle them. Learning how to juggle 4 balls during Covid is paying off.
Well, for those that don't know how to juggle, we'll just play a game where you toss the ball to yourself and run as fast as you can from one line to another and then back. 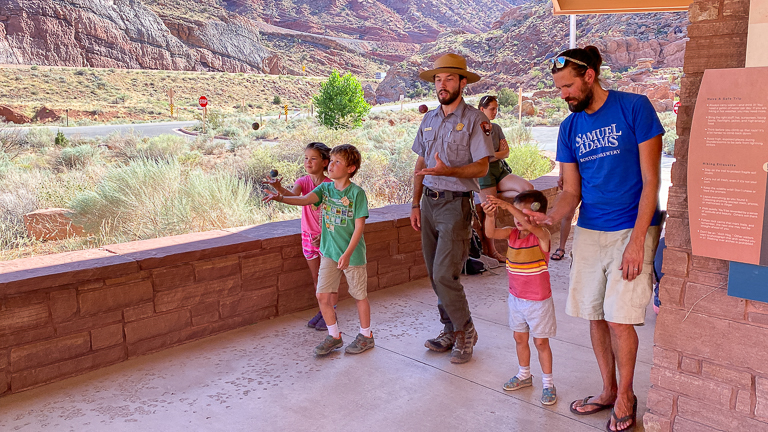 Thanks Ranger Corbin! That was fun!
But look at those bright red faces. It's been a hot day in the sun. These kids were looking forward to something cold. 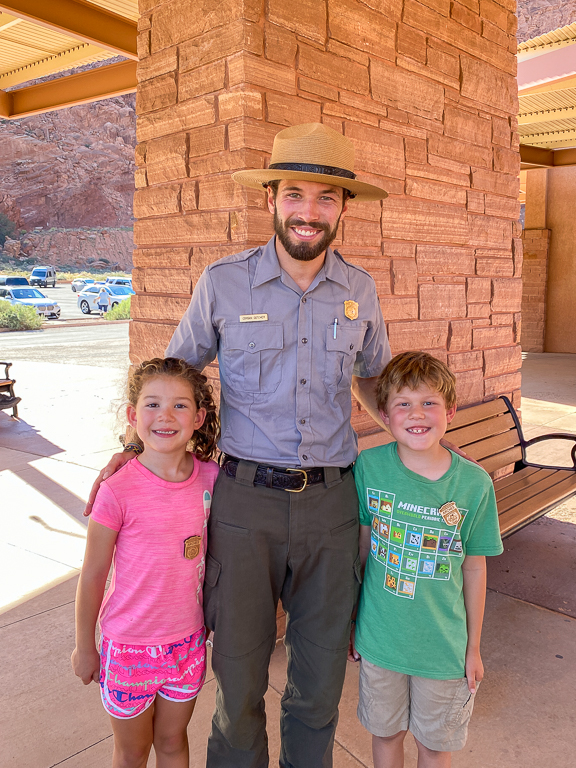 Ice cream! We stopped by the grocery store on the way home. With these kinds of temperatures the freezer in the RV is having a hard time keeping up. Best not to waste any ice cream. 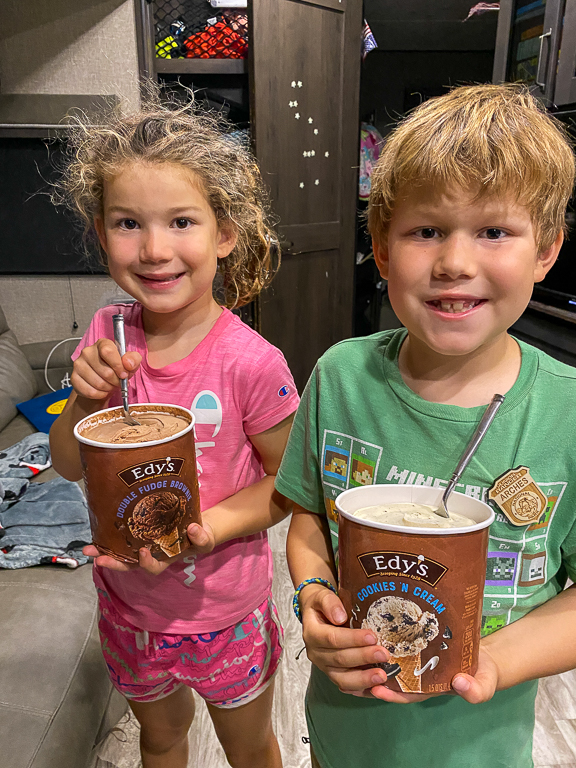 Better just eat it all now... 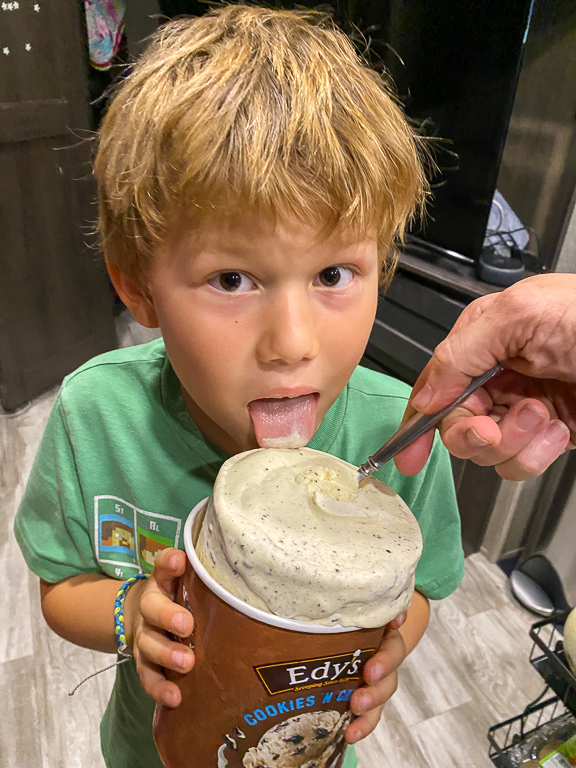 The night skies here are sure to be beautiful, so after dinner, everyone hopped back into the car and headed back into the park. We decided to stop at The Windows to see what we could see, and the view did not disappoint. The Milky Way was just becoming visible. 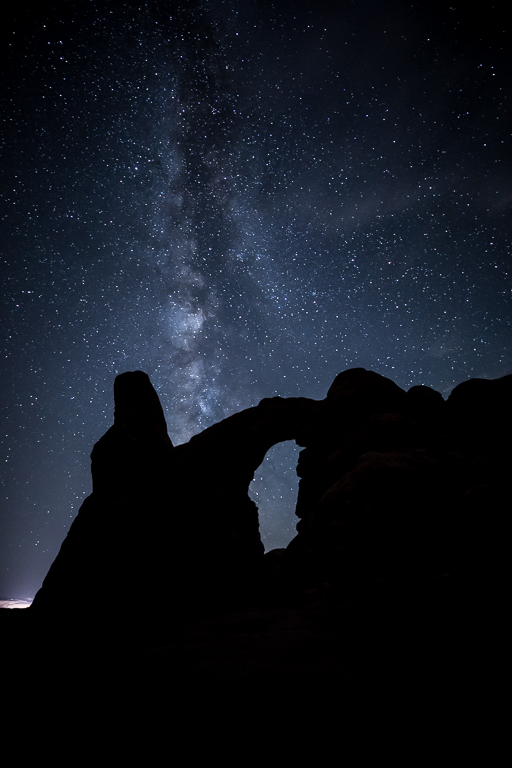 Getting a picture of T and the kids. 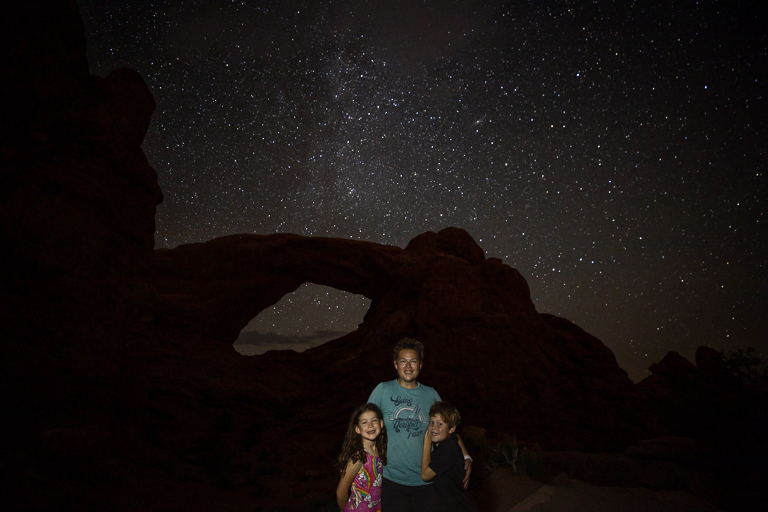 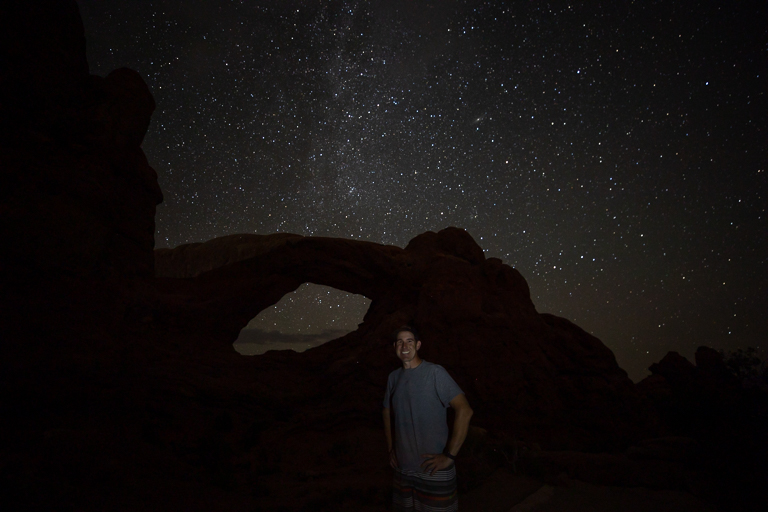 Before too long though, a cloud layer started to roll in that was reflecting the light of the city of Moab. The radar showed it was continuing for a while, so that is going to end our night.
Arches has gotten off to a great start! I'm looking forward to seeing even more tomorrow! 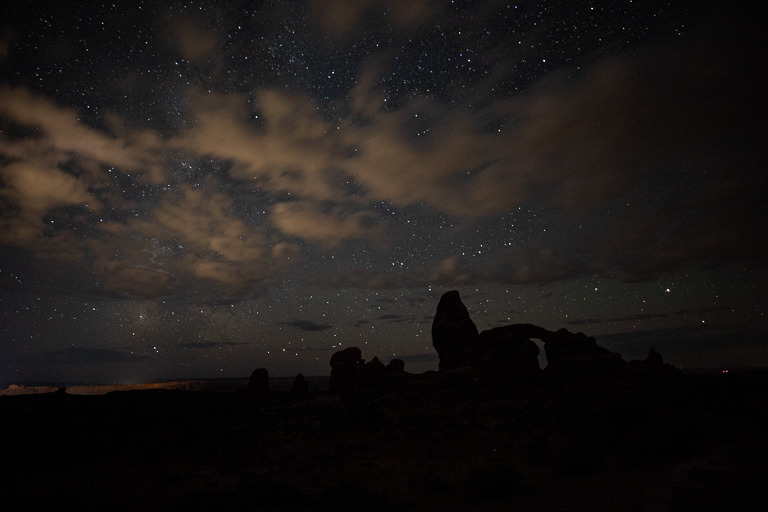