November 18th is recognized as the birthday of both Minnie and Mickey Mouse! Today they're 91 years old! The kids were excited when I told them so they've been doing all sorts of things to celebrate today. 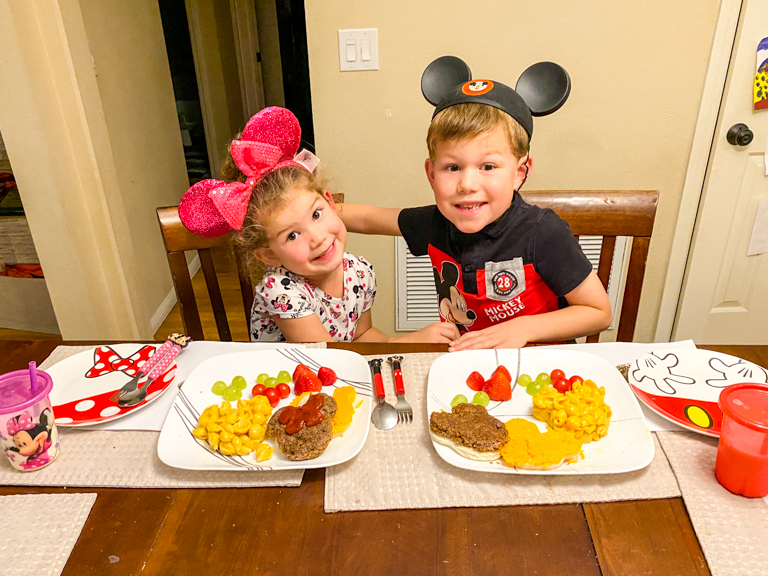 When I got home from work, Alli greeted me at the door in this outfit that she picked out herself. That's very well coordinated Alli. A beautiful pink Minnie dress, pink Minnie shoes, and Minnie ears on top. She showed me that underneath her dress she was wearing Minnie shorts too.
I told her I wanted to get a picture of her and she said "Minnie Pose!" and moved into this position. 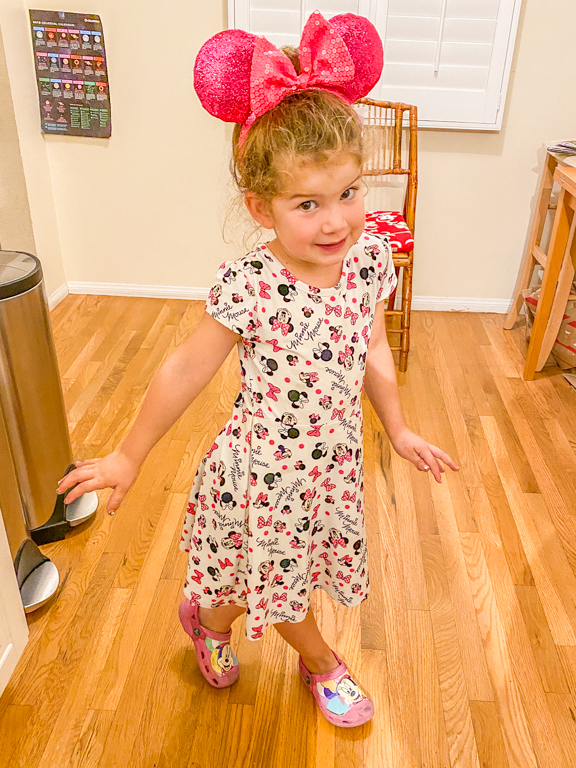 For dinner we're making hamburgers. The kids always get to help out. They're getting good at cracking eggs and not getting any shell in it. They split the duty, one doing wet ingredients, the other doing dry ingredients. And they both get their hand messy mixing up the meat. 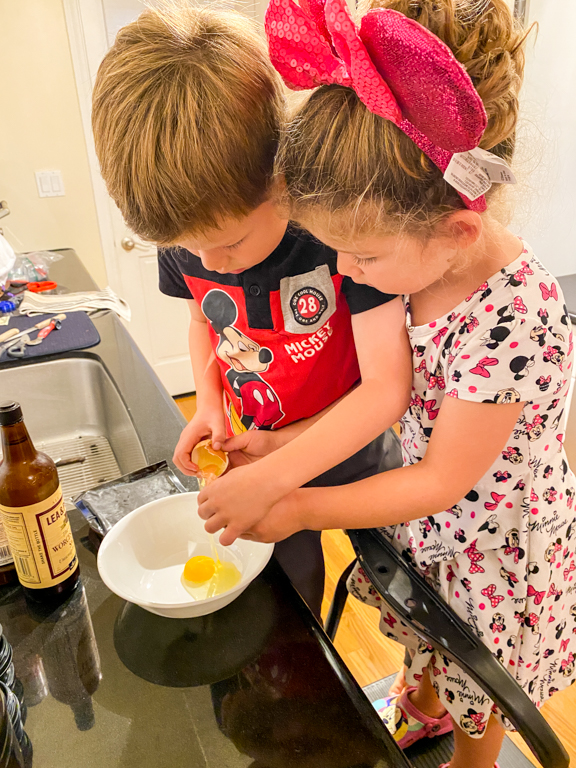 Everything is Mickey shaped on our plates tonight. From the grapes, tomatoes, and strawberries, to the macaroni and cheese. And finally our hamburgers happened to be Mickey shaped too, along with the bread and cheese too. 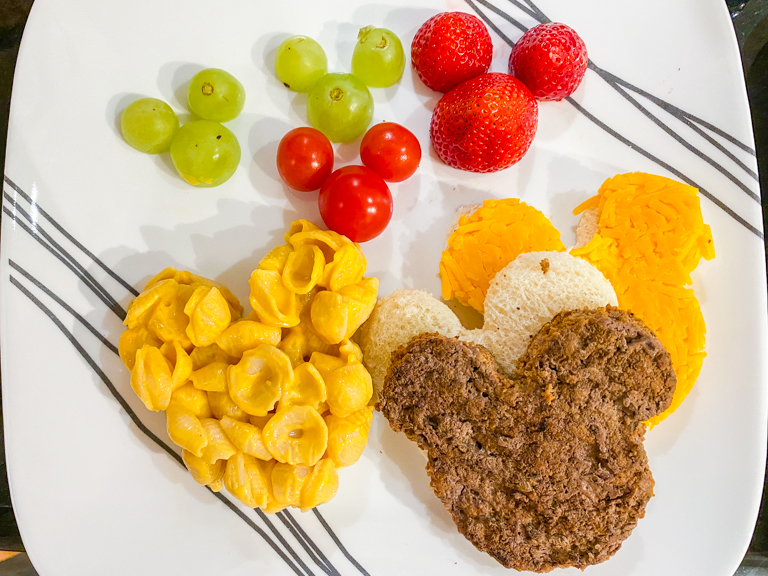 Oh you want Minnie Mouse? No problem at all. Just add a little ketchup and now we have a Minnie bow. 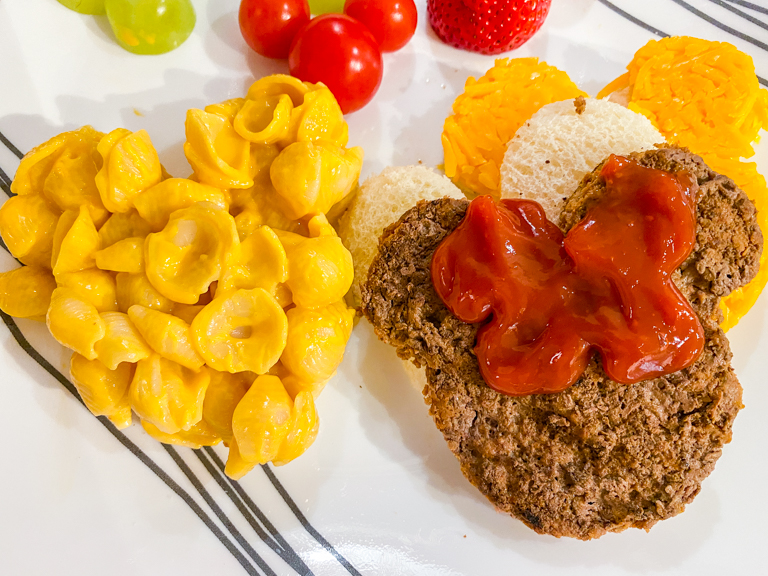 As I said before, the kids have been busy. In their Maker Space they have made everyone their own initials for where we sit. Then below it they drew placemats. Mickey for the boys and Minnie for the girls. 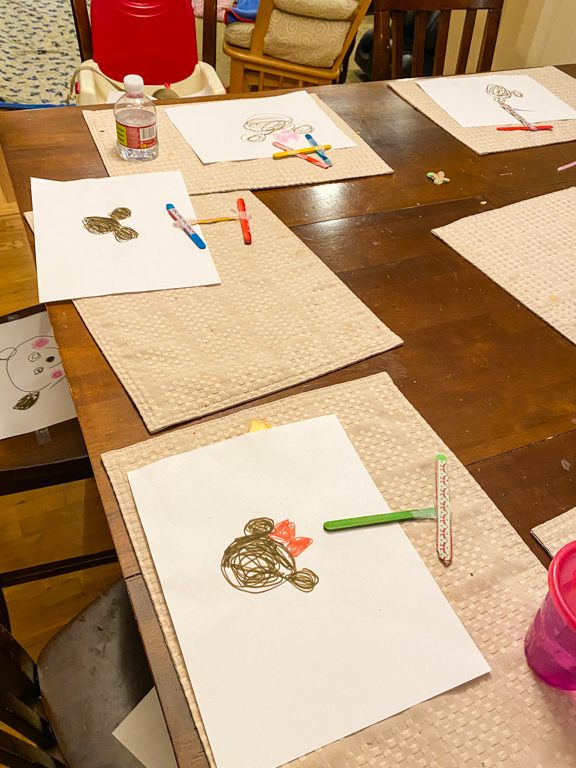 For us to sit on, they drew, I don't know, cushions maybe? Here's Alli's version of Mickey Mouse. 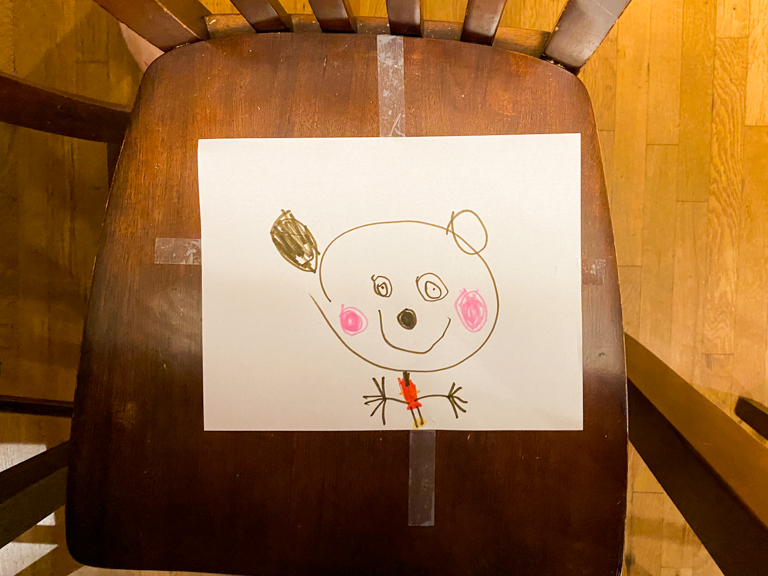 And a combination piece by Ian and Alli of Mickey Mouse. I like the frame they made from their Christmas tape. 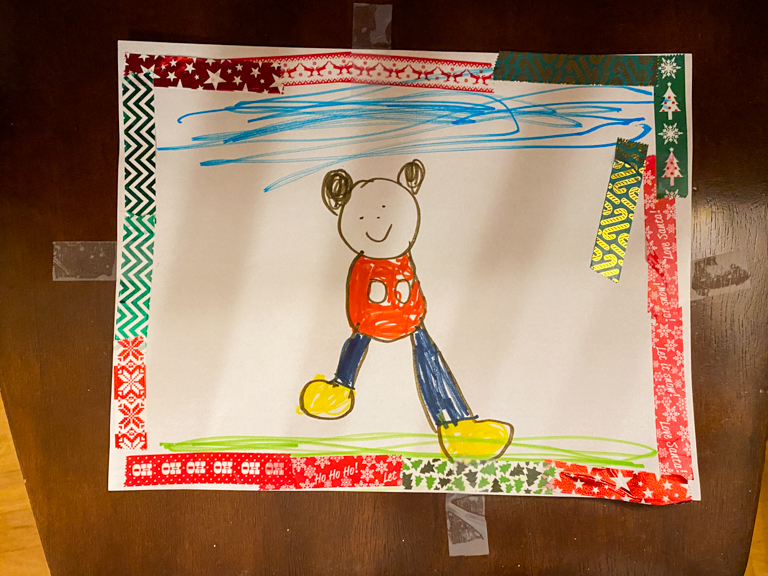 They were going to use their Minnie and Mickey plates that they got from France, but it was a little too much food. They used them for lunch though.
Minnie and Mickey utensils and cups were used too.

Everything tastes better when it's Mickey shaped. 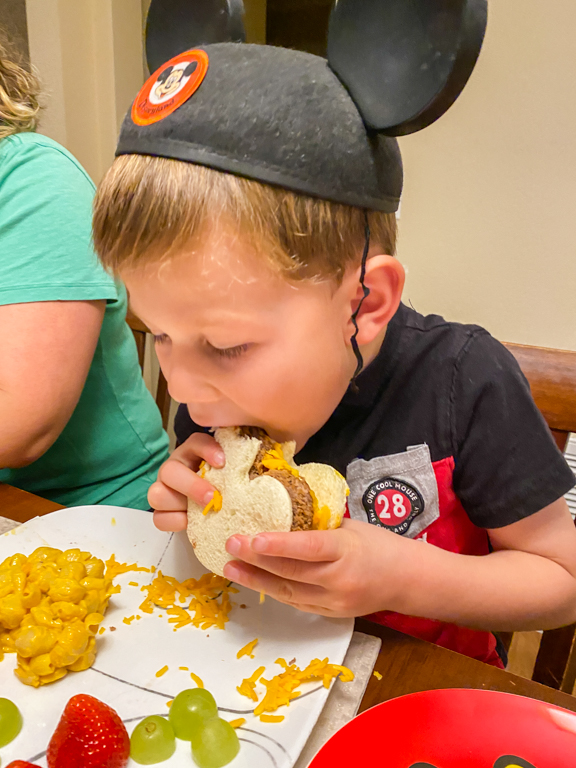 During dinner I told the kids we'd watch some Mickey and Minnie cartoons, including their very first appearances. Unprompted they went to their rooms and pulled out their blankets and quilts. 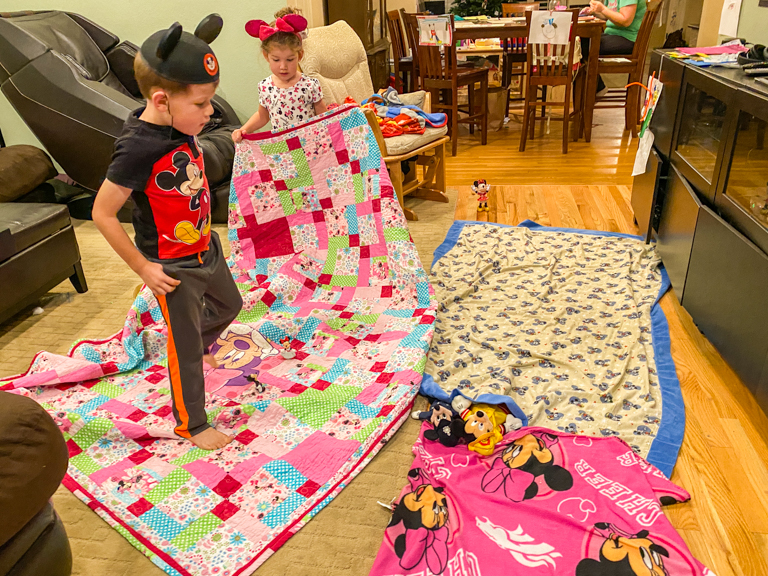 Then found a few of their Mickey plushes. 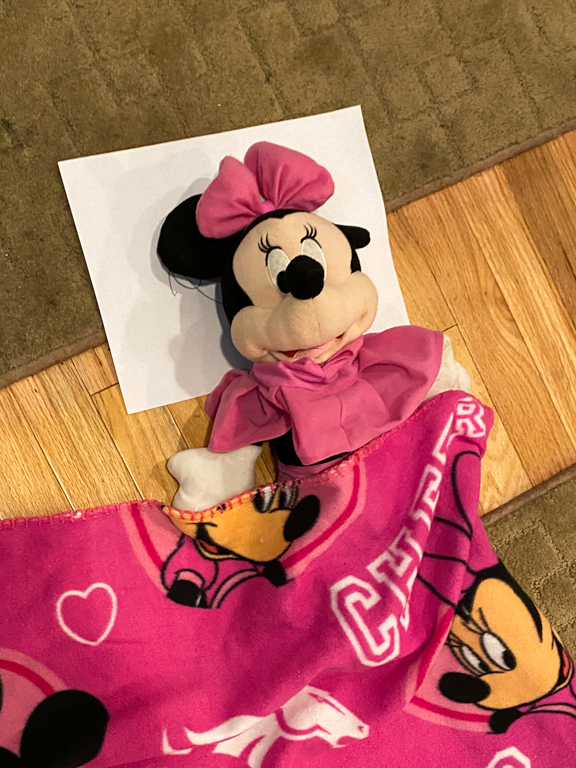 And brought them all out to watch cartoons too. 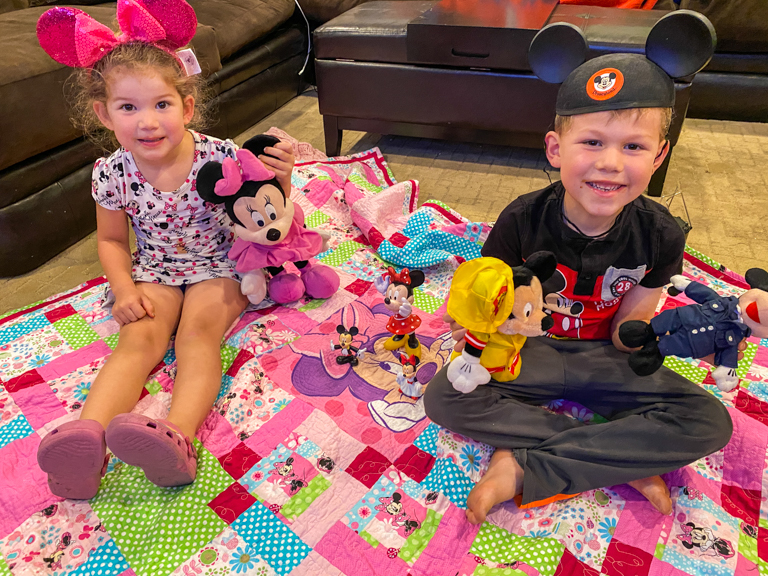 Steamboat Willie is recognized as the first Mickey cartoon, and the date it premiered in New York, November 18th 1928, is considered the birthday of both Mickey Mouse and Minnie Mouse.
And even though that's the first official cartoon, Mickey and Minnie made their debut in front of test audiences on May 15th 1928 in the short Plane Crazy. It didn't do so well and was not released to wider distribution until March 17th 1929.
Either way, we're starting with his first appearance. The kids are at the perfect age for all the slapstick humor. 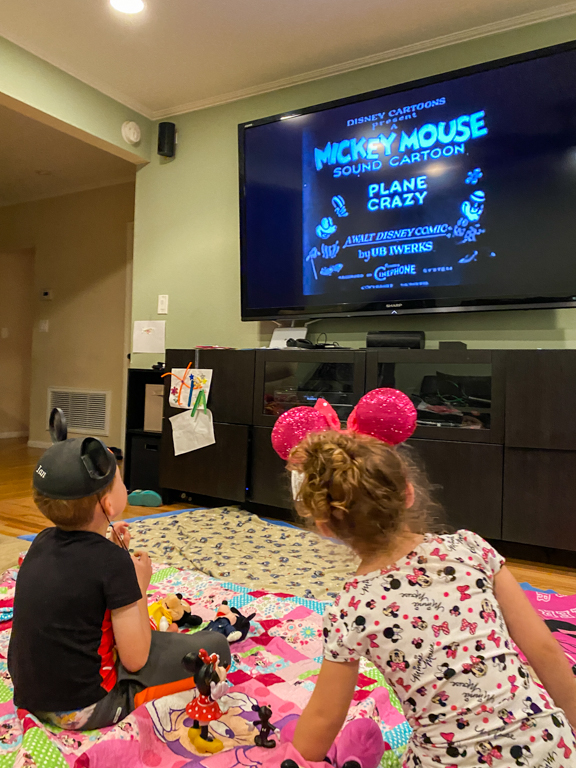 And Steamboat Willie was right after that. My little whistler Ian was whistling right along with Mickey while he was driving that steamboat.
Ian - What's Pete chewing on? (it was chewing tobacco)
Me - Um, it's gum and he's spitting out the gum juice. 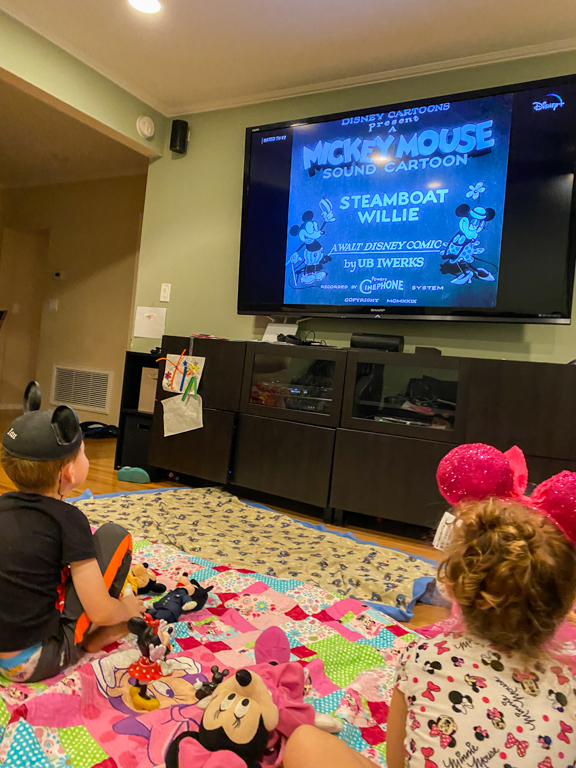 After bath time and songs (different versions of Happy Birthday including the Disney Happy Birthday version from the 1983 Splashdance album).
They each wanted pictures of themselves in bed with their quilts from Gram. Mickey for Ian. 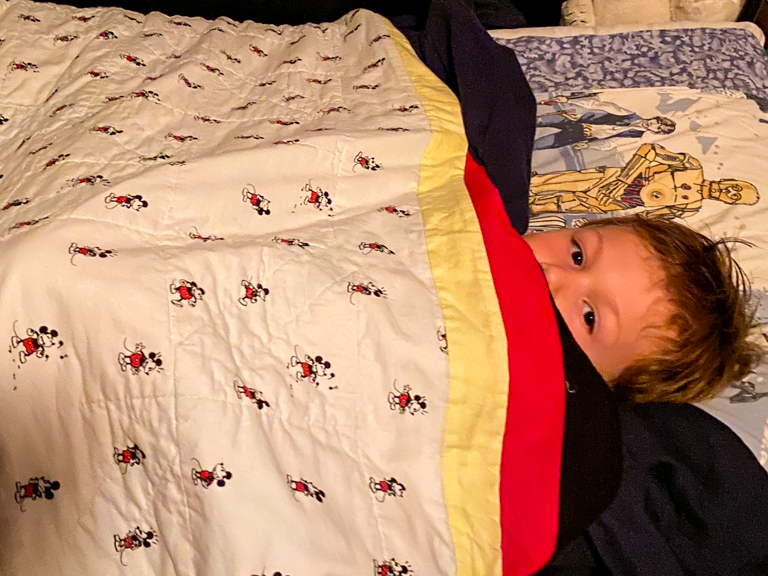 And Minnie for Alli. 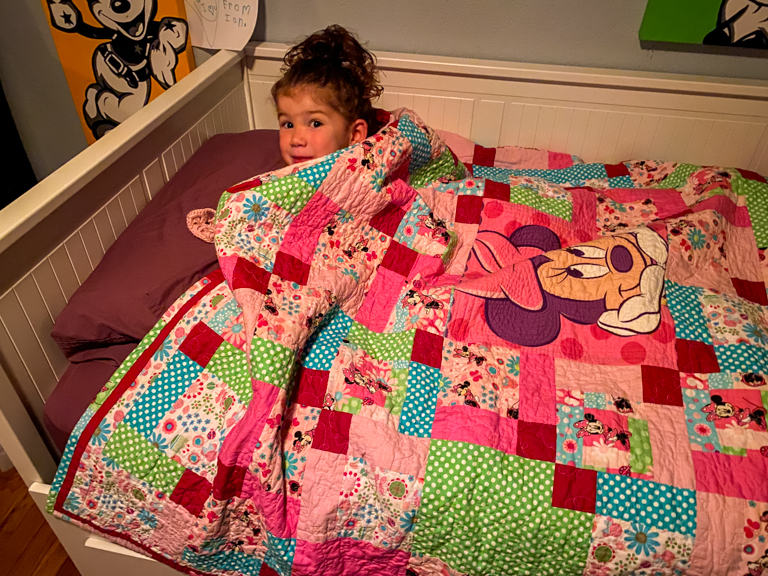 Happy Birthday Minnie and Mickey!
Posted by Joe at 6:00 PM