Indian Pudding? When I first read that November 13th was National Indian Pudding Day I initially dismissed it. While I'm a fan of curries, I was pretty sure the kids wouldn't be, so I wasn't going to pursue it. But I read further and learned that it's not this India, but instead is meant to reference the American Indian and the corn the English colonists received from them. 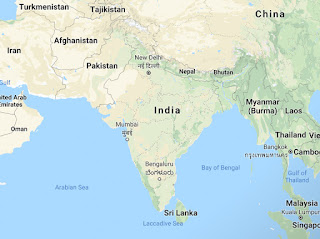 Having just used the corn meal the day before for the pizza crusts, I knew we had all the ingredients to make this sweet treat. The kids were excited to help out once again in the kitchen. 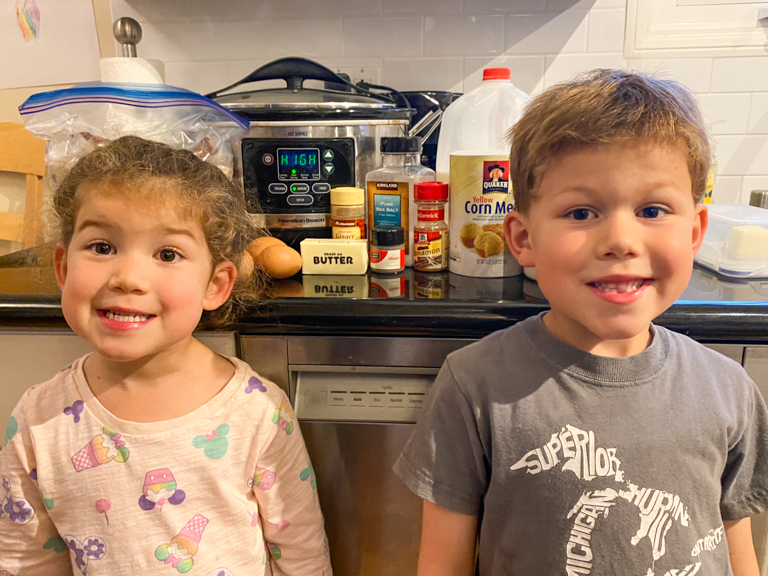 Our recipe was based on this one, requiring cornmeal, milk, salt, eggs, brown sugar, butter, maple syrup, cinnamon, allspice, and ginger. It was said that most American cookbooks before the 1900s included a recipe for Indian Pudding. But because of the long cooking times and the availability of more commercially available puddings, it fell out of favor in the 20th century kitchen. 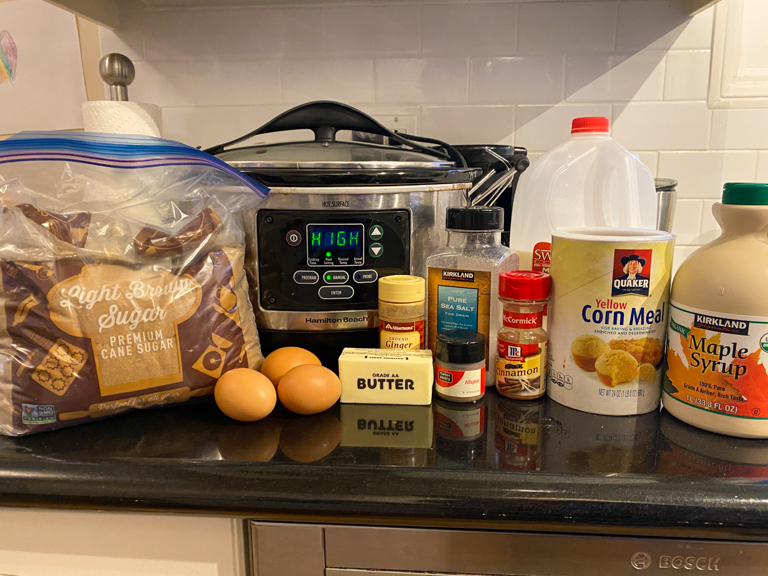 It starts with 3 cups of milk. 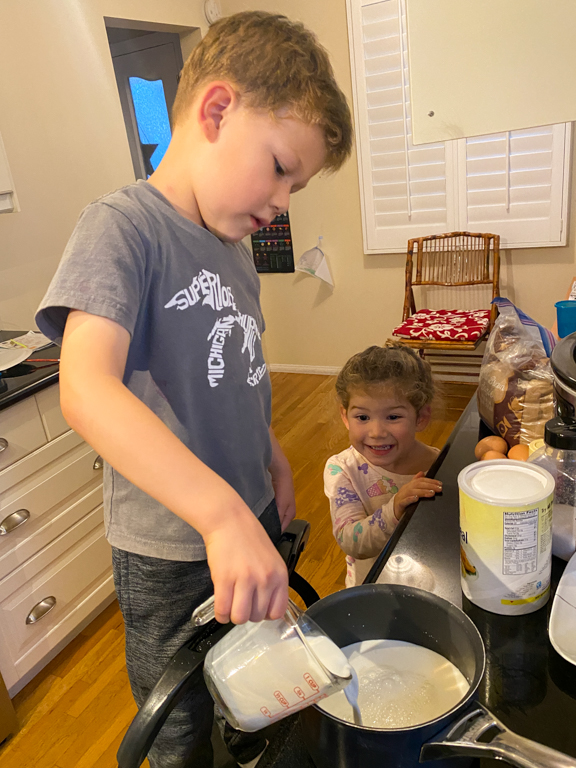 To that you add just 1/2 a cup of cornmeal and a dash of salt. I was initially concerned that that wasn't very much cornmeal compared to all that milk. 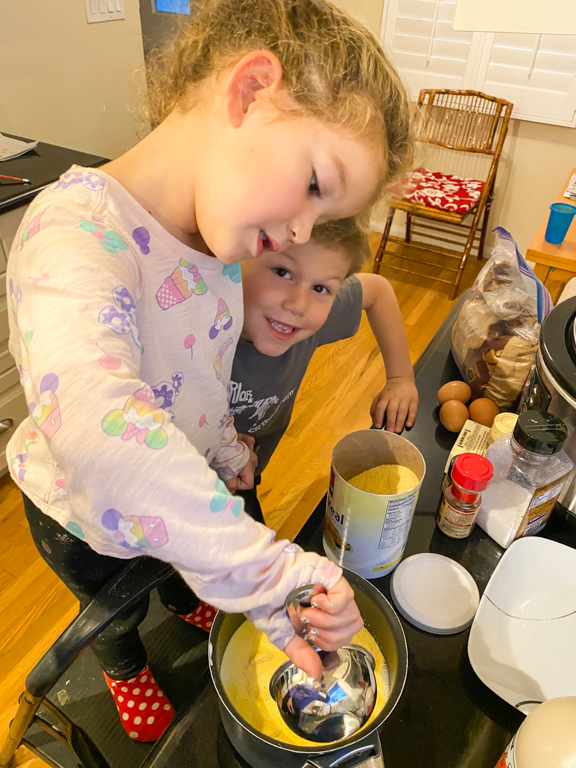 But after 5 minutes boiling on the stove, it thickened up quite well. 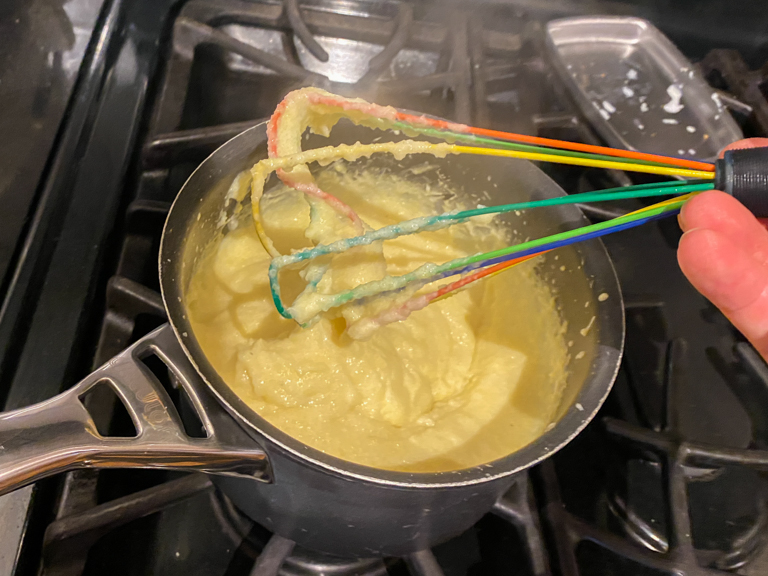 While that was boiling, the kids measured out the remaining ingredients and added them to a larger bowl. 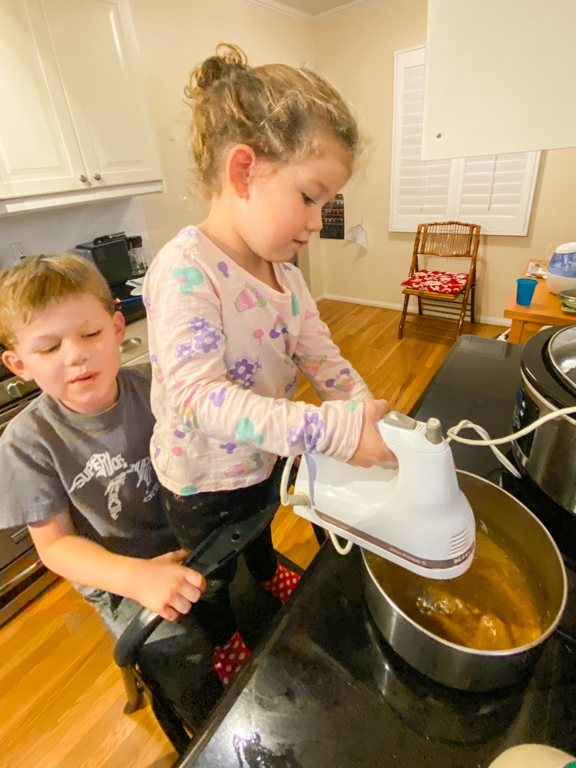 I slowly added the hot cornmeal mixture to the rest of the ingredients while Ian mixed everything together. 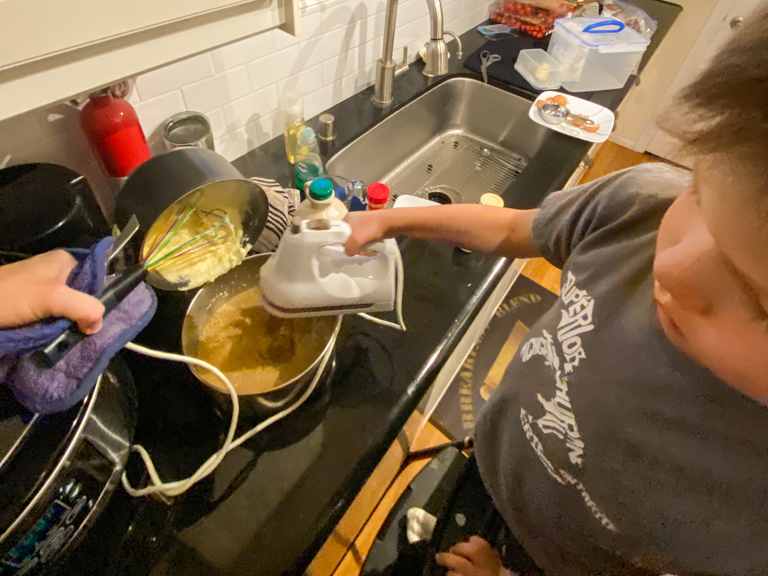 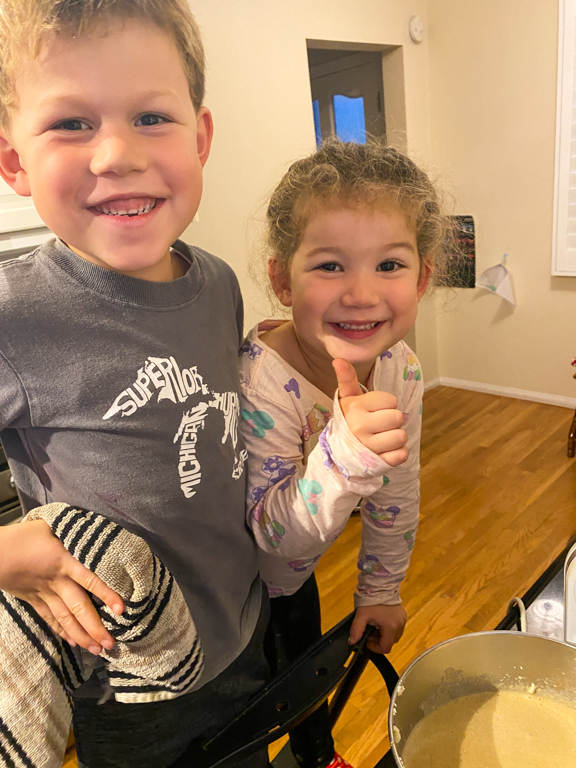 Of course what kid doesn't want to lick the whisk. In this case he's just licking cornmeal and milk mixture that was boiling on the stove. Not the final mixture with the raw eggs. What does it taste like Ian?
Ian - It tastes like grits.
You've got a good taster on you because that's exactly what grits are. Ground cornmeal with water and/or milk. 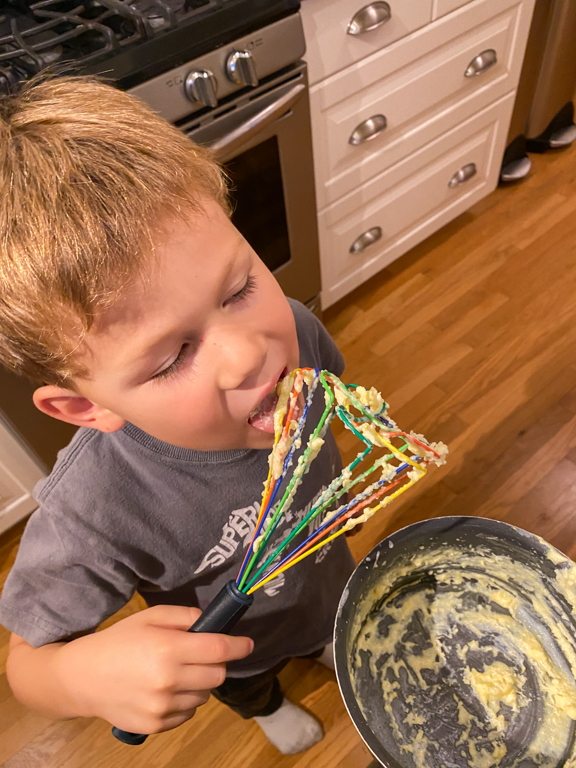 I scraped the rest into a bowl for the kids to finish. They do love grits. 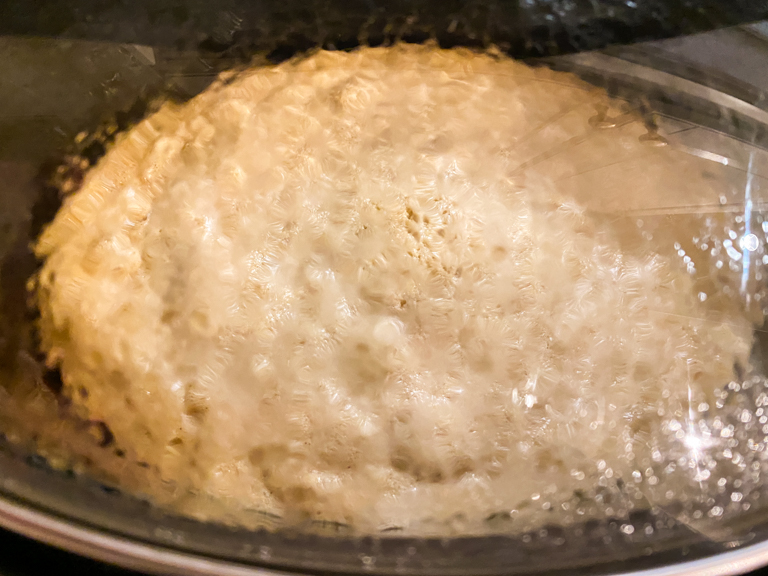 The original recipe calls for a low and slow bake time of 6 to 8 hours. Nobody has time for that. An alternative was to cook on high for 2-3 hours. That's a little better. 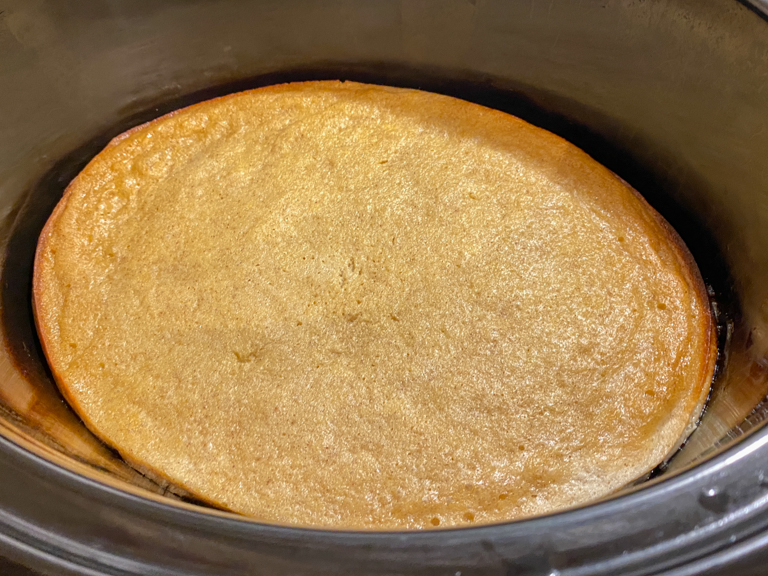 But it was still bedtime before the Indian Pudding was finally ready. While it was cooking it was filling the house with a delicious smell. 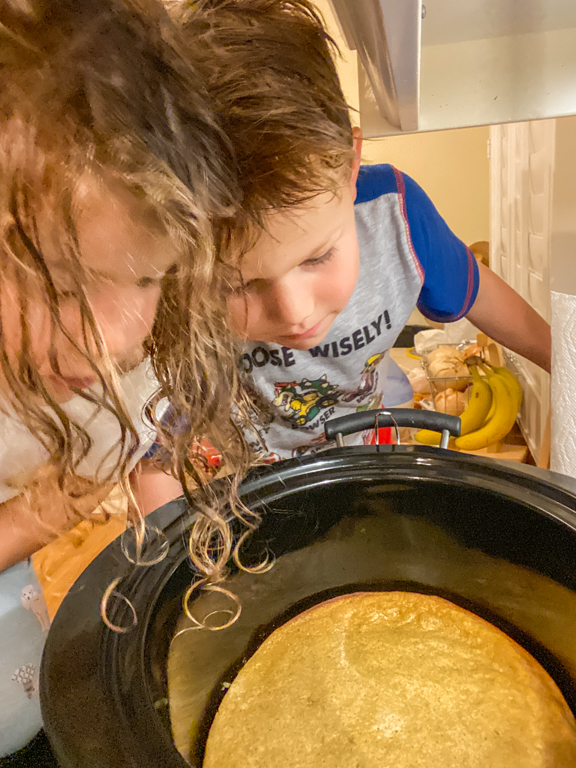 The texture is... interesting. One of the other things I read about why this dessert hasn't done so well is also that visually it doesn't look all that appealing. 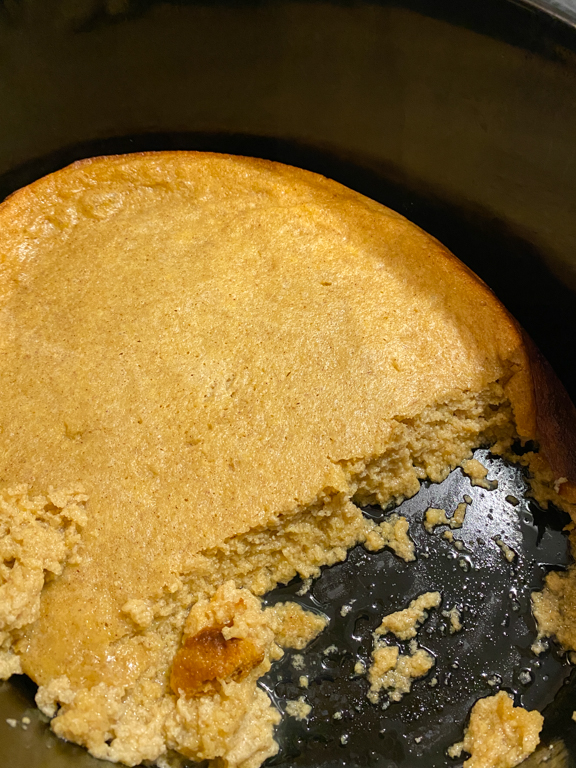 And now it's time to taste it. 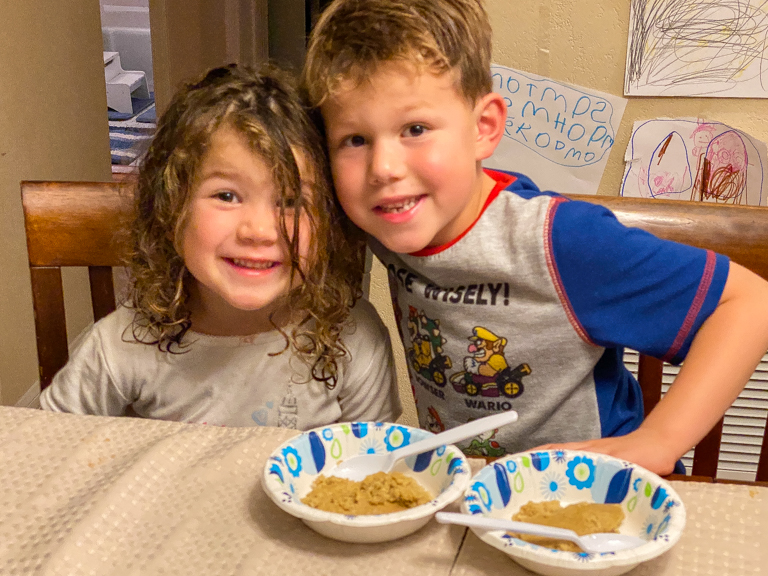 Hahahaha. Well I don't think Ian likes it. According to him it tastes "weird". He didn't elaborate on if he meant texture or flavor. 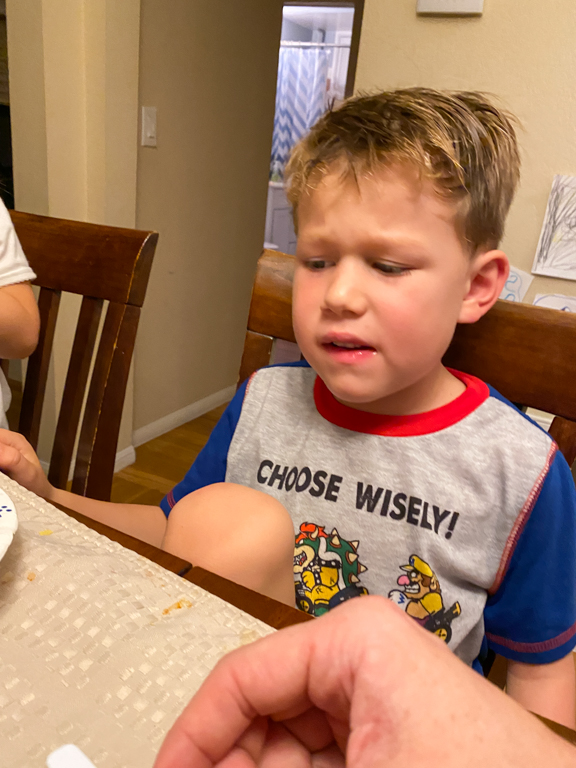 Alli thought it was good though. 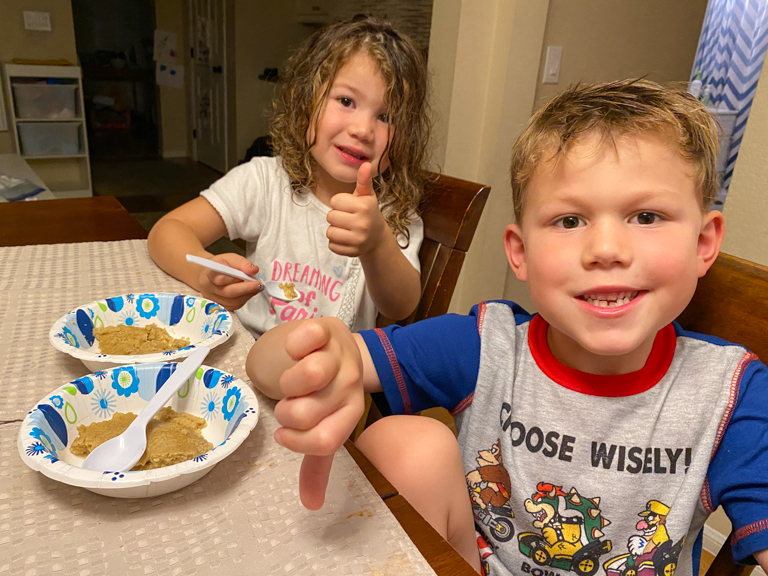 Theresa and I liked it as well. It's got a good flavor, despite the interesting texture. 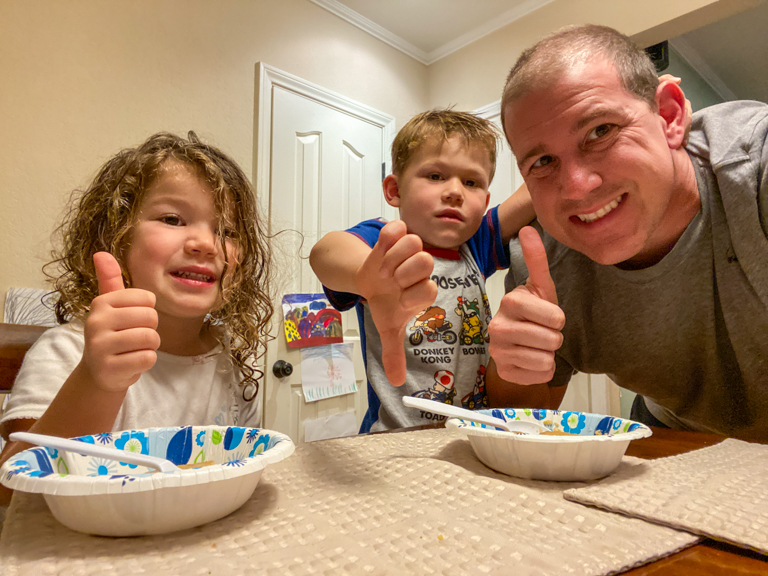