On a recent visit to the grocery store, the kids and I found these interesting new cereals on the shelf. They're called Fillows and they come in two different flavors. A Hershey's Cookies 'N' Creme and a Pillsbury Cinnamon Roll flavor. Their claim to fame is that they're A Crème Filled Cereal. And apparently they are applying the Oreo method of stating that it is Creme instead of Cream. 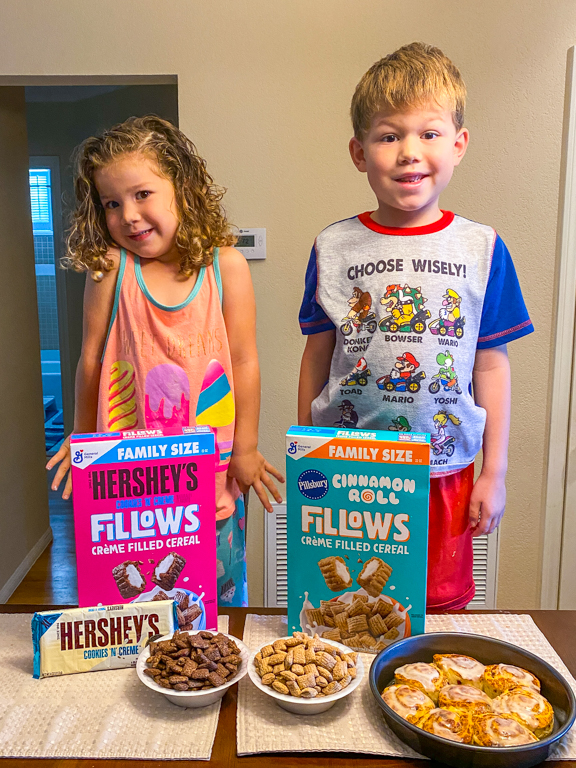 And as usual when we're tasting these, I try to get what it's representing too. In this case a Hershey Cookies 'N' Creme bar and a tube of Pillsbury Cinnamon Rolls. 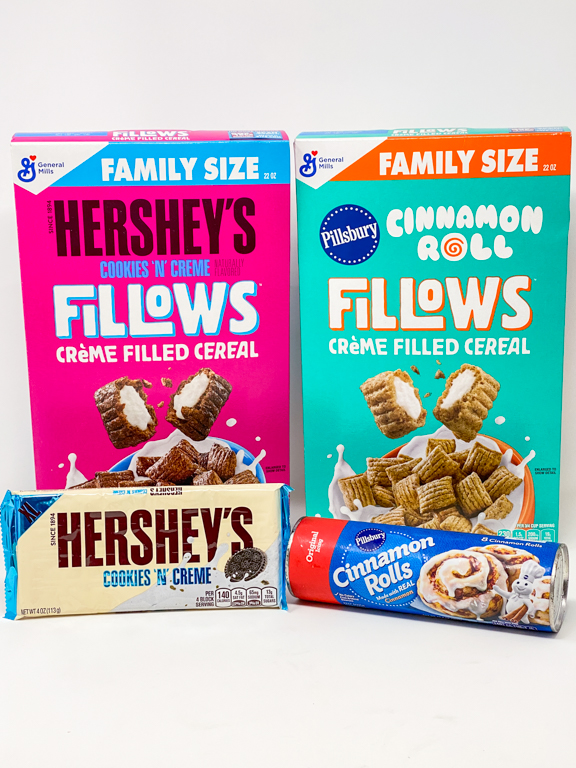 Each of the cereals have interesting mascots. 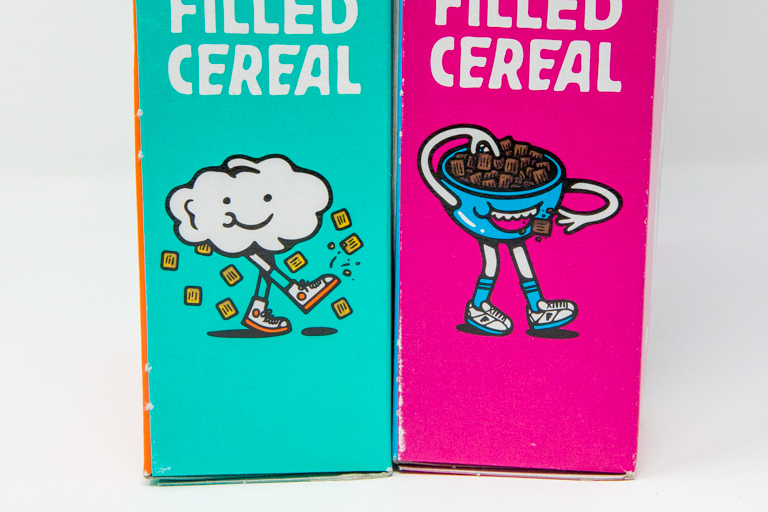 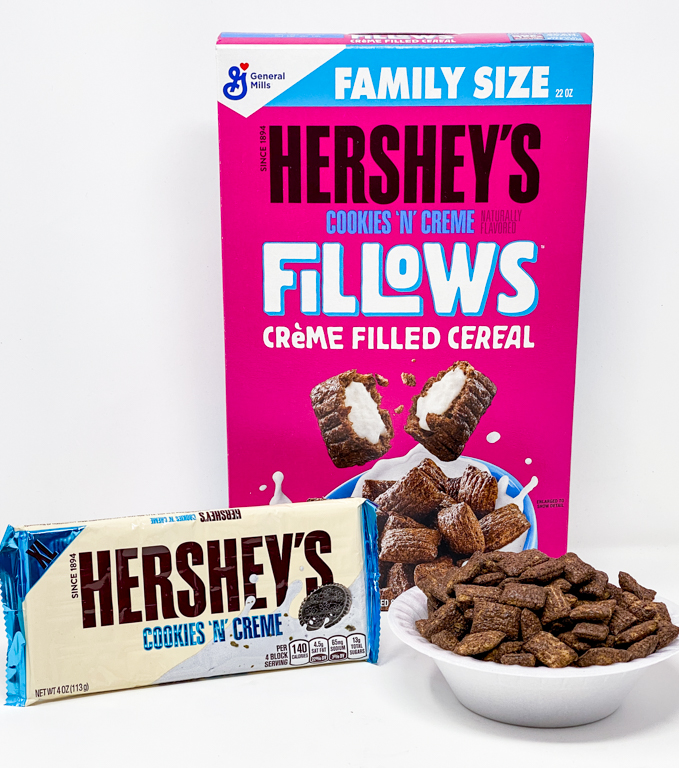 The cereal itself has a definite Hershey's chocolate smell. I'm assuming the name is a merger of the two words Filled + Pillows = Fillows 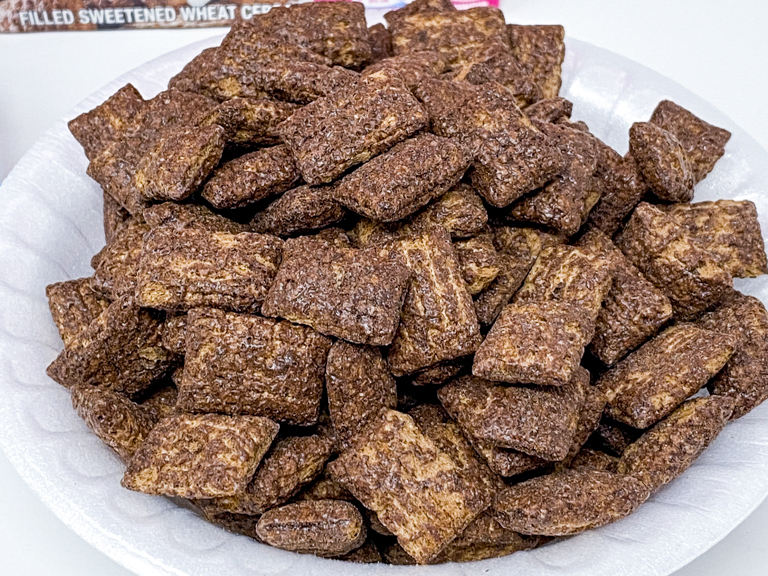 One oddity I noticed when I opened the box was this metalized bag. Usually cereal is in a clear plastic bag. This reminded me more of a pop tarts wrapper. 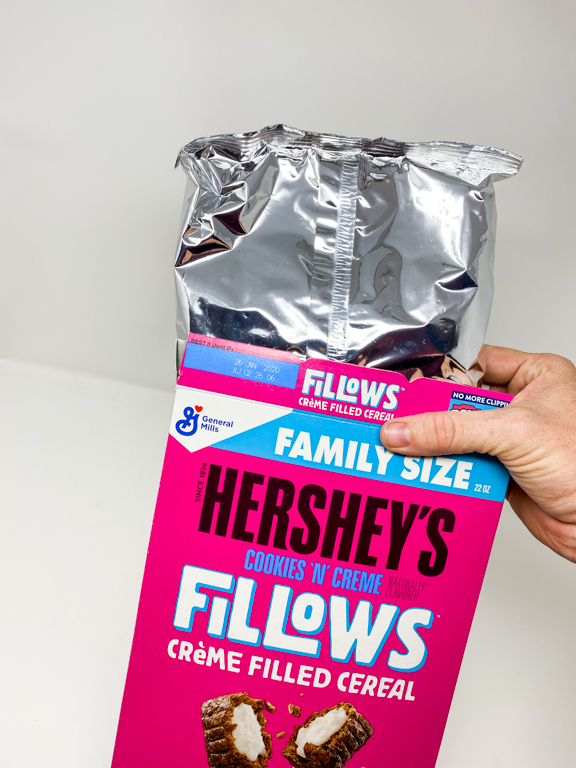 Next are the Pillsbury Cinnamon Roll Fillows. 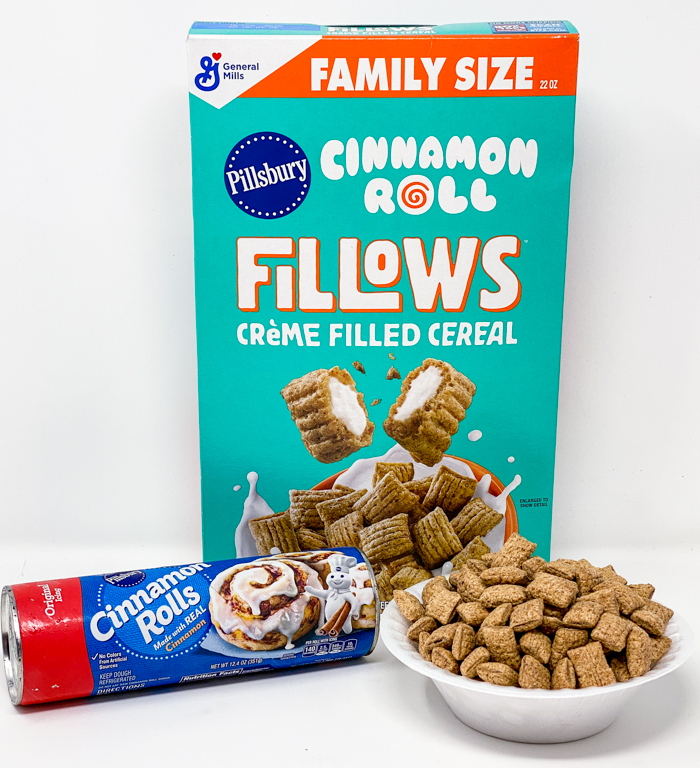 A closer look at the cereal.
Now those cinnamon rolls aren't doing anyone any good inside that tube. Alli, want to help me in the kitchen? Oh yes. 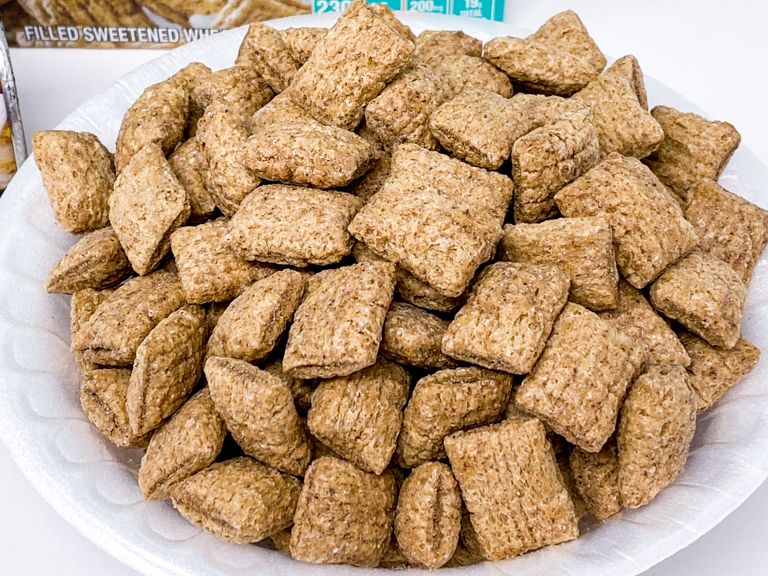 Time to get our bake on! Apparently this is the first time I've let her "pop" a tube of pressurized dough. 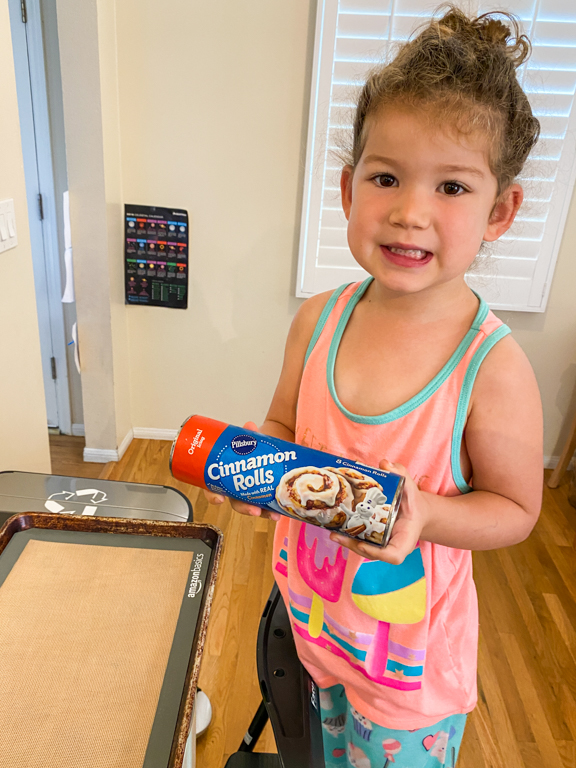 We greased up a round cake pan and she put all 8 of the rolls in. 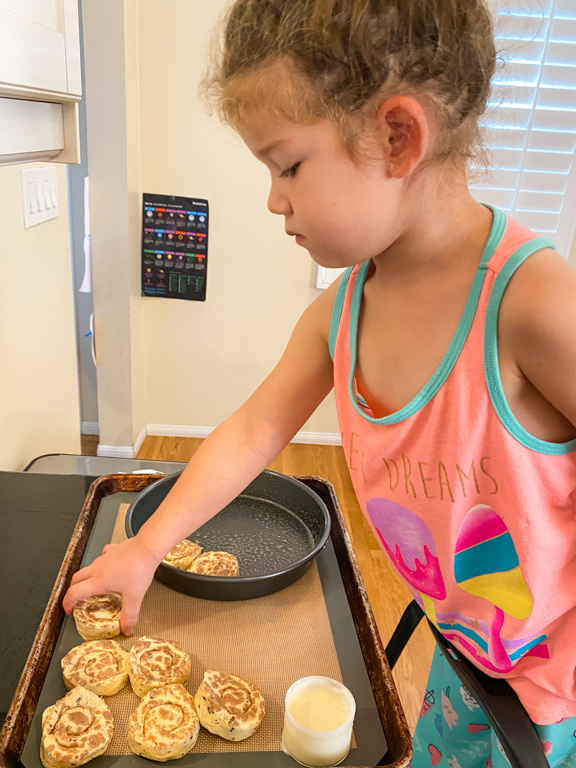 And 15 minutes later, they came out of the piping hot.
Careful not to touch the pan, Alli put the delicious icing onto the top. 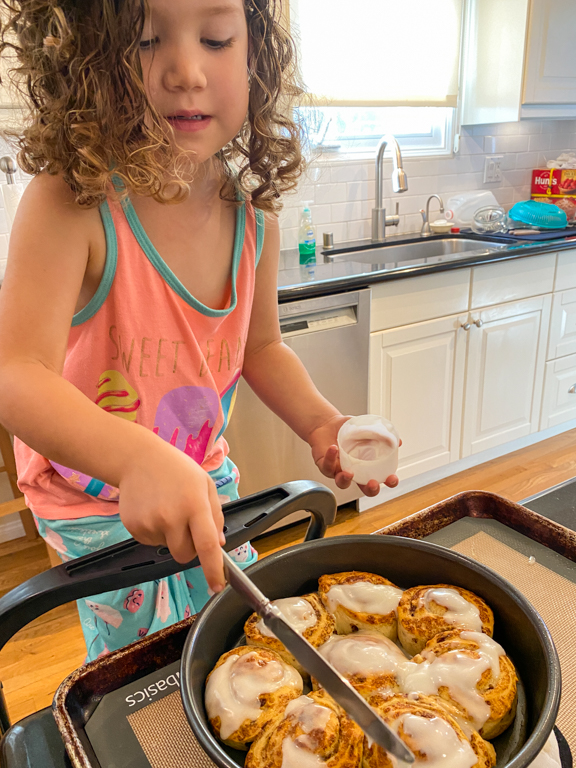 And now we're ready to dig in. 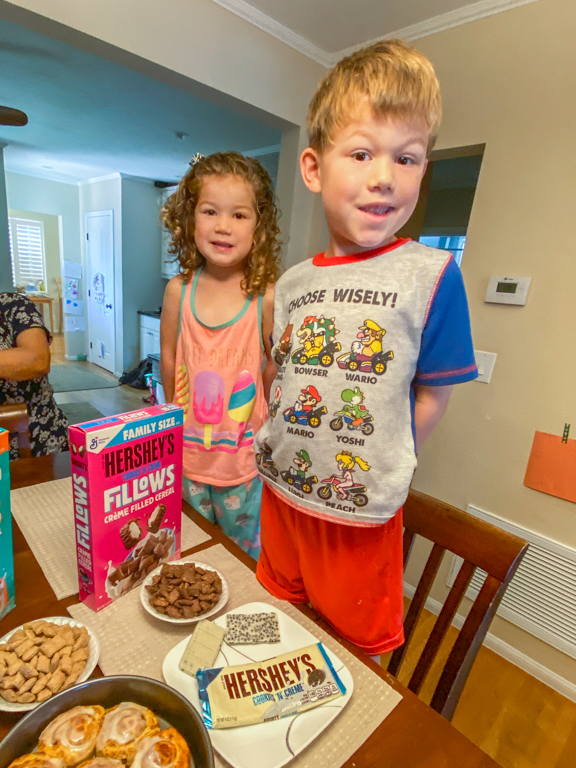 Alli, as my special helper, you get to pick which one we try first.
Alli - Of course the chocolate. 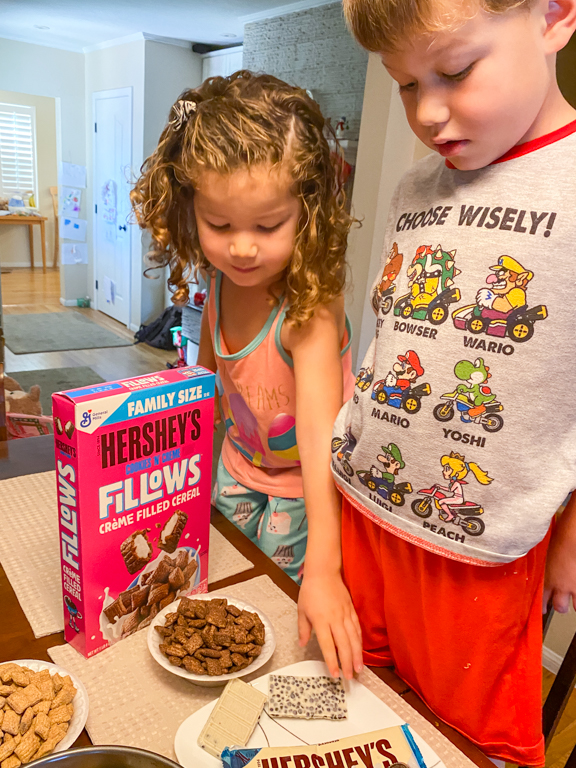 Giving her brother the first piece. 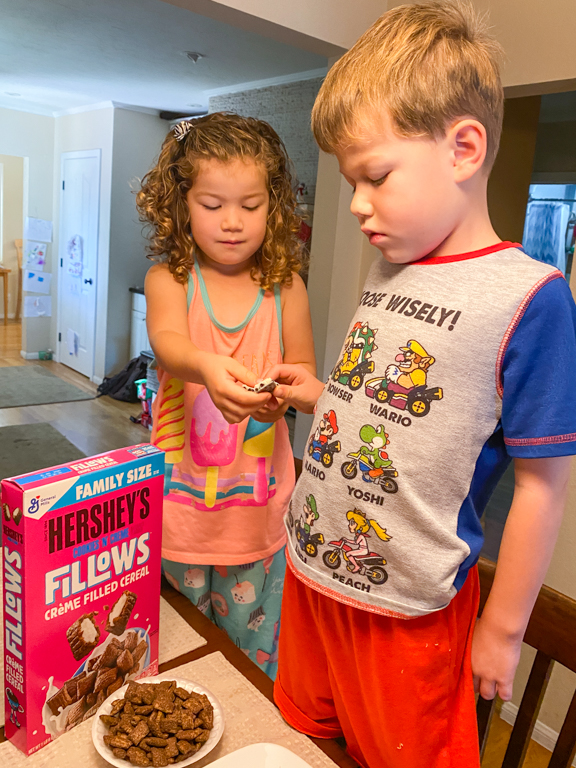 The cereal was nice and chocolatey. And inside was a nice surprise. It's actually creamy! Not a dried paste, not a gummy goo like that Pop Tart Cereal.
I get why they tried to theme it like Cookies 'N' Creme because it's the only Hershey item I can think of that has cream in it. But it's really more like a Hershey's Chocolate Bar with cream in it. I could totally see this being relabeled as an Oreo cereal. 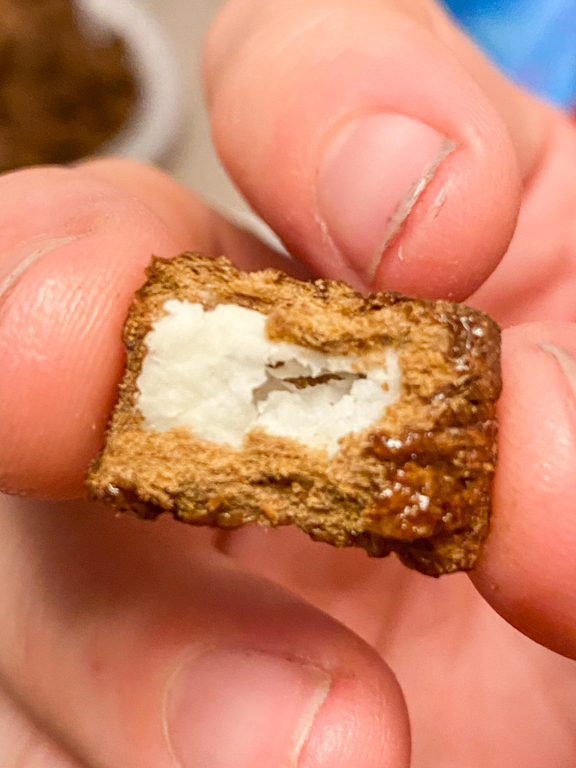 Time for those Pillsbury Cinnamon Rolls. They are lick your lips tasty. Fresh bread is always a win. 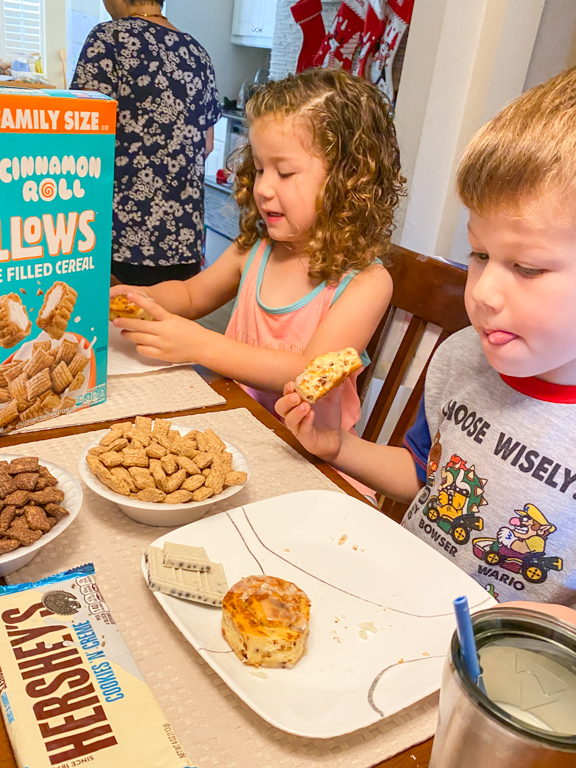 Once again, they did a great job with the filling. Nice and creamy.
The cereal though for the cinnamon roll could have been improved. The adults who tried it all agreed that there was a distinct lack of cinnamon. It was there, but it was way too subtle. I want a cinnamon cereal to hit me with flavor. 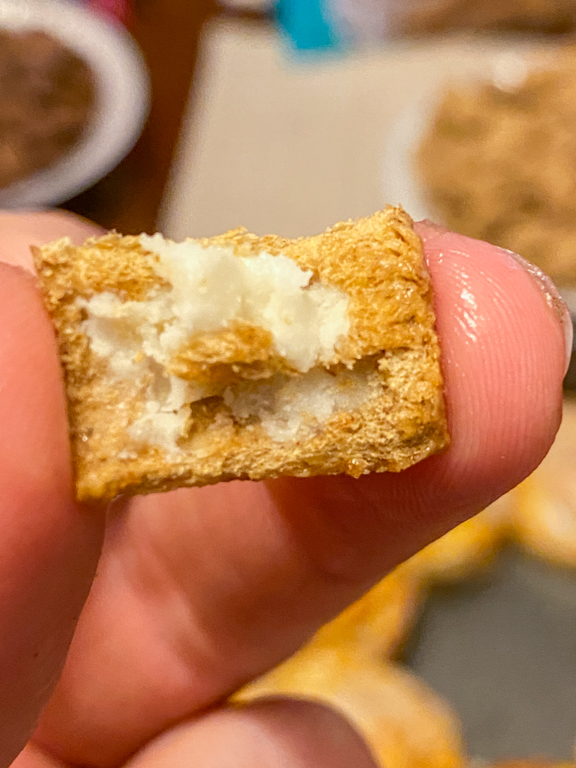 So between the two of them, the chocolate cereal with the cream filling was the best.
Posted by Joe at 12:30 PM