For today's cereal, we're taking a look at what might happen if you were on the go and still wanted cereal. There's a whole line of cereal bars that are quick and easy. We're going to start with Frosted Lucky Charms - They're Magically Delicious! 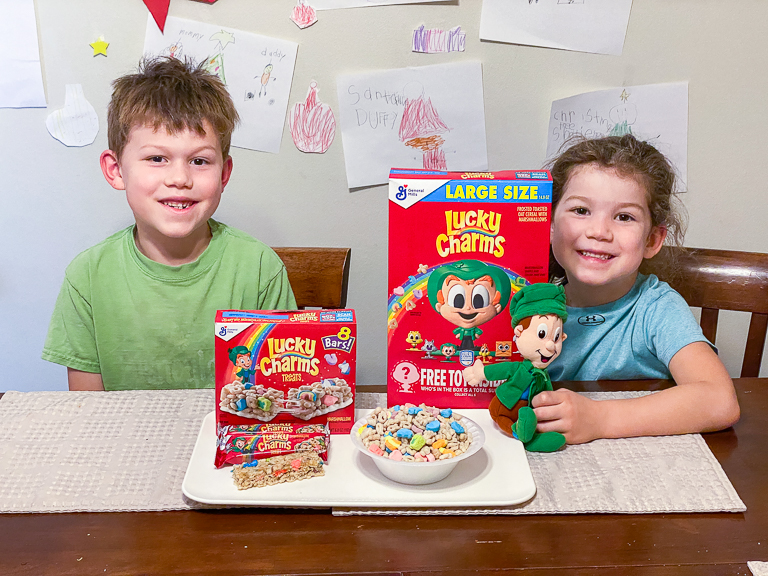 And we're certainly not going anywhere any time soon, so we're going to compare them to the classic Lucky Charms cereal. 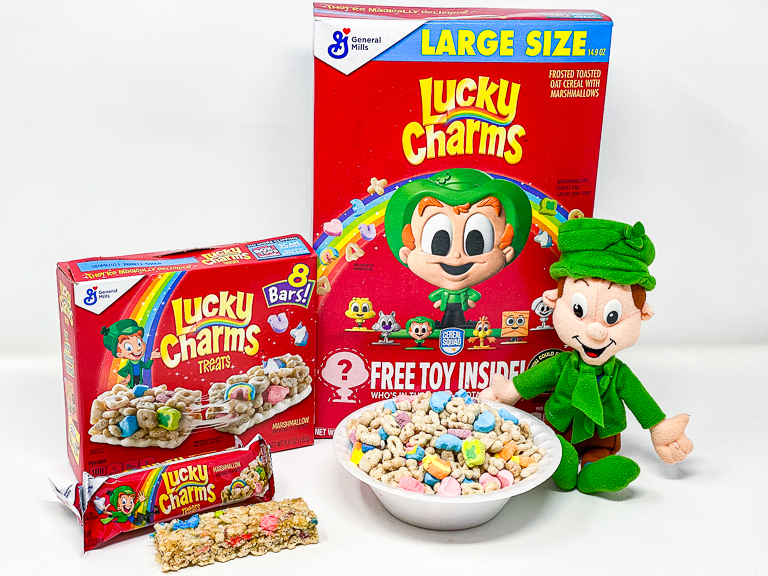 The back of the boxes. I'm happy to see that even the Lucky Charms Treats have something for the kids to do. On the regular box, Meet the Cereal Squad! Series 1 of the Cereal Squad has six toys to collect. There's Lucky the Leprechaun, Cinnamoji, Chip the Wolf, Sonny the Cuckoo Bird, Buzz the Honey Bee, and Trix the Rabbit. It's a random toy inside each one so you never know which member of the squad you might get. The kids were hoping for a mini Lucky to go along with their Lucky plush.
And when Ian saw that there is a chance there might be a gold one inside, he was excited. His favorite color is gold. 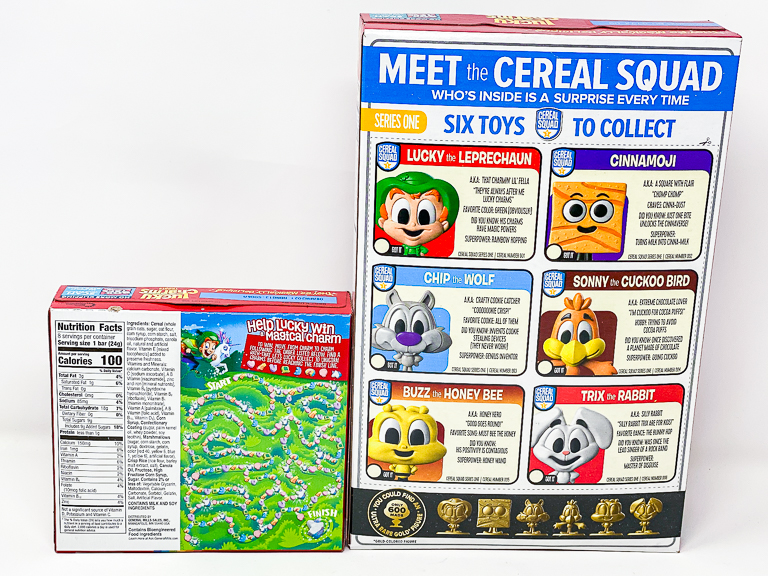 The sides of the boxes have nearly mirrored graphics. Lucky's eyes are looking in different directions. 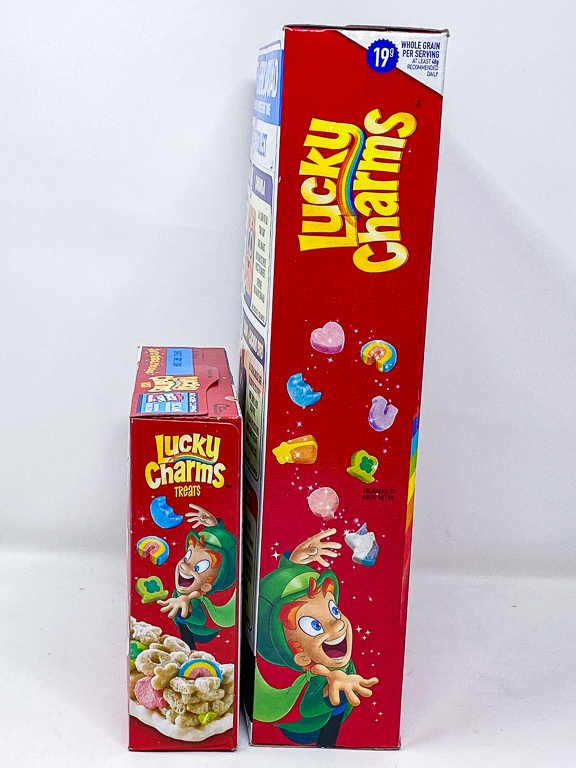 The Lucky Charms Treat... don't quite look like the packaging. The box shows big whole pieces of cereal, lightly packed, and a gooey marshmallow. The actual treat looks like it's been compressed under a masher of some sort. These marshmallows haven't fared nearly as well as the ones on the box either. 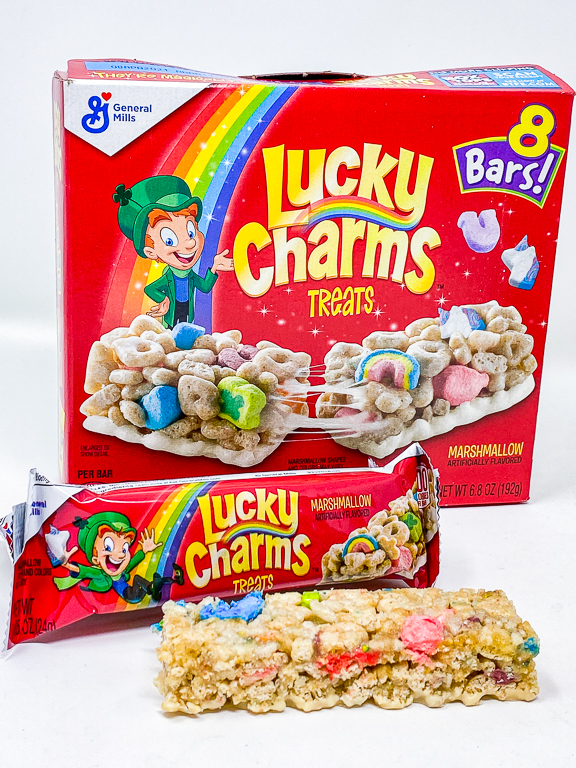 That white creme/sugar layer on the bottom is an off-white color too compared to the box. Never-the-less, we press on. 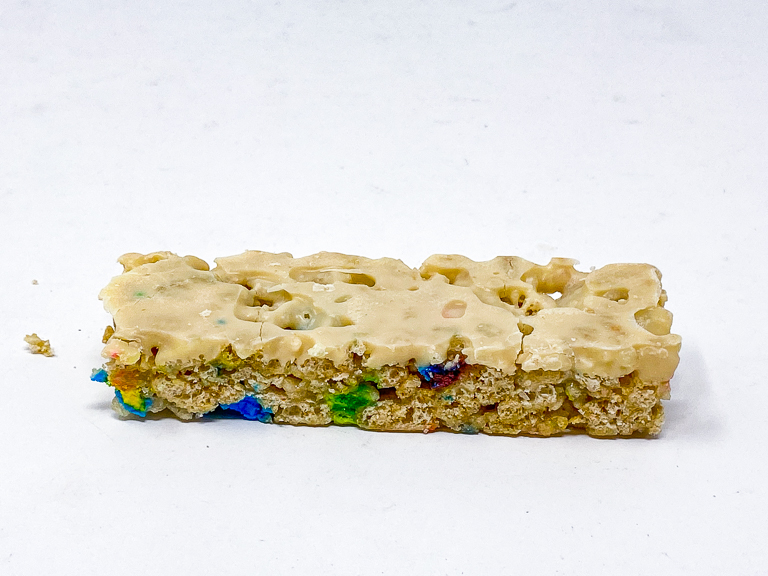 The kids go right to the puzzles on the back. 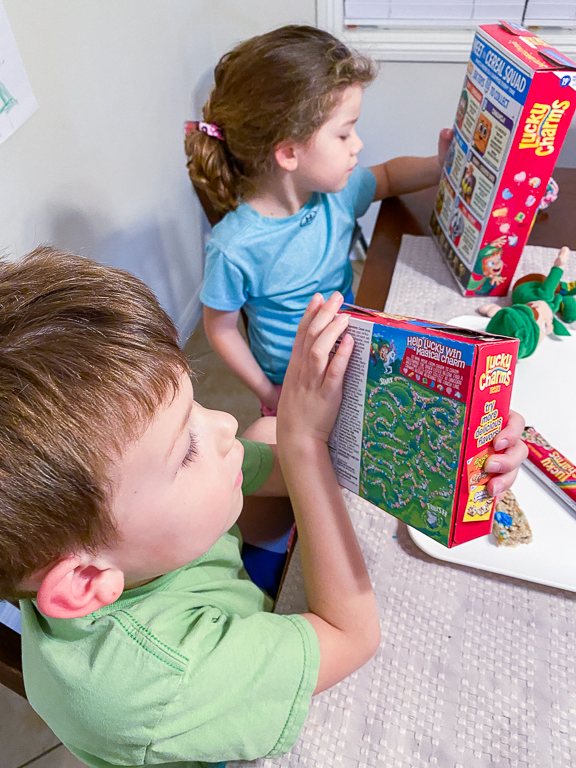 I shook out 3 bowls of cereal. This one seems to have an excess of Rainbows and Pink Hearts. Alli, this bowl was obviously meant for you. 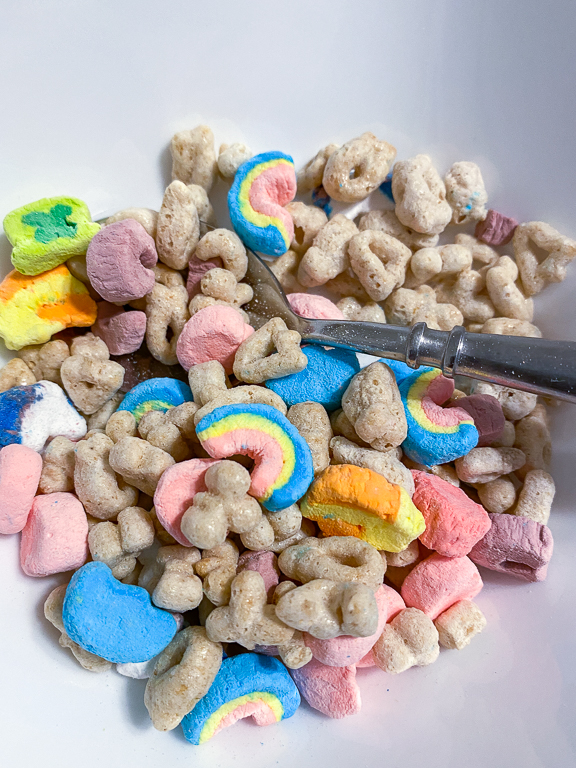 Ian, I see Blue Moons and Shooting Stars. For my boy who loves space, this has to belong to you. 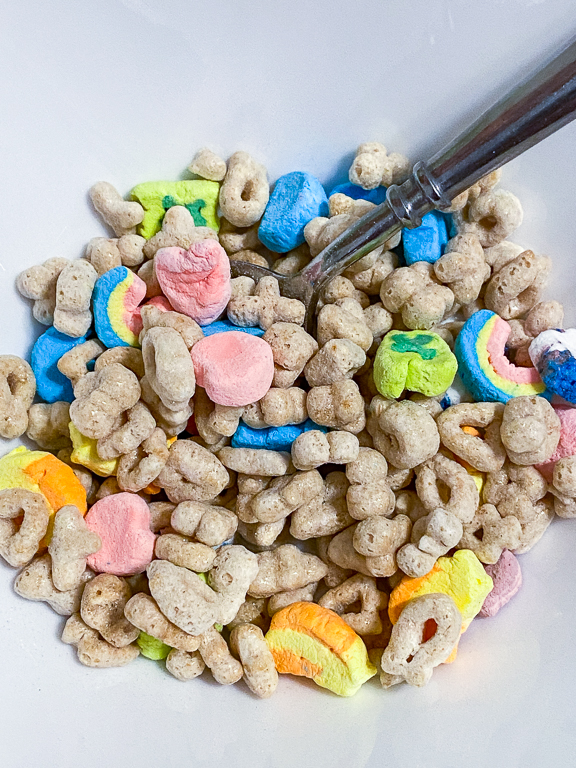 We started with the cereal. Ian is electing to go dry, while Alli and I prefer ours with a little milk. Hmm, I actually like these Lucky Charms better than I remembered. I had thought the cereal bits were just filler, while you really wanted to get to those sweet marshmallows. But the cereal is sugar coated too, making it a sweet treat all by itself. I wonder what I'm remembering? Maybe Alphabits? Were those frosted? 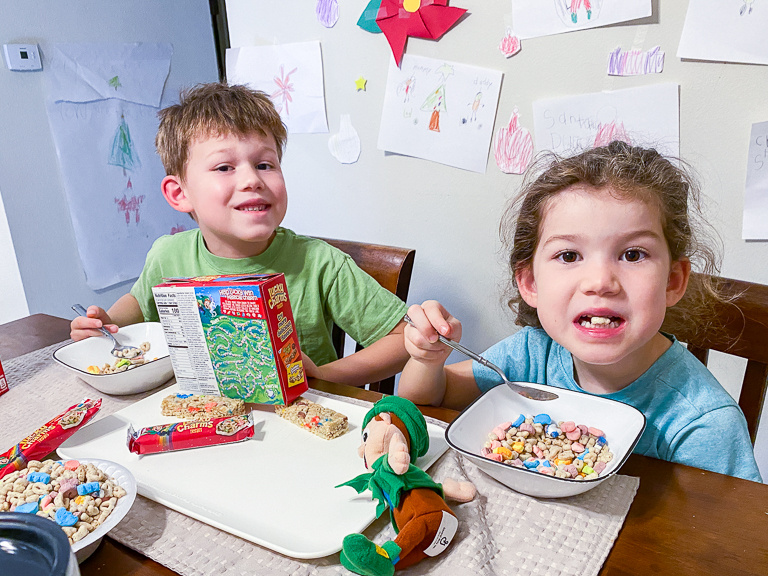 Next we move on to the Lucky Charms Treat bars. 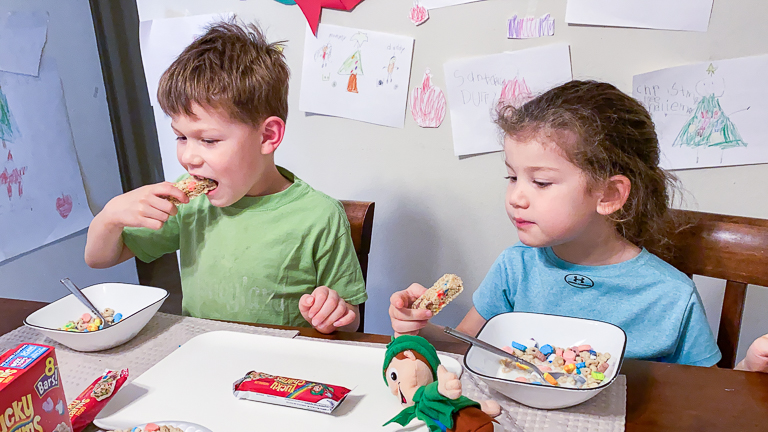 The faces this boy makes. This time though, he didn't dislike it. It's just not the flavor he was expecting. He couldn't taste the marshmallow, thinking instead it was more like the chewy chocolate chip granola bars he sometimes gets. Alli and I thought they did taste like marshmallow though. And they are very sweet. 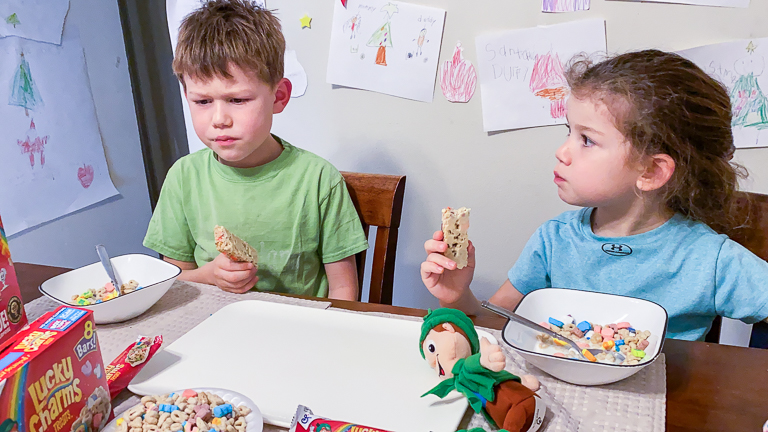 Reading up on the Cereal Squad and hoping for Lucky. 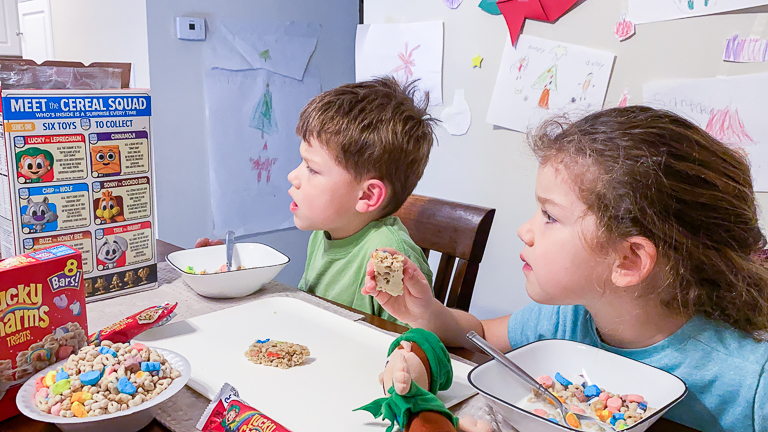 Alright kids, you can go ahead and get the toy out. I've been seeing fewer and fewer toys inside cereal boxes latest. This is our first toy in a while. And I remember burying my arm in the bag of cereal trying to find the toy. This toy wasn't even in the cereal bag. It was a separate bag underneath the cereal bag. 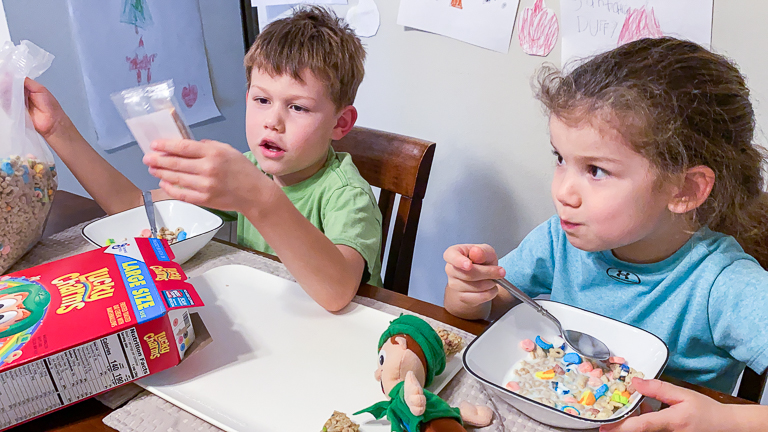 And it looks like we've got Cinnamoji. Oh well. I can use him in some upcoming taste tests. 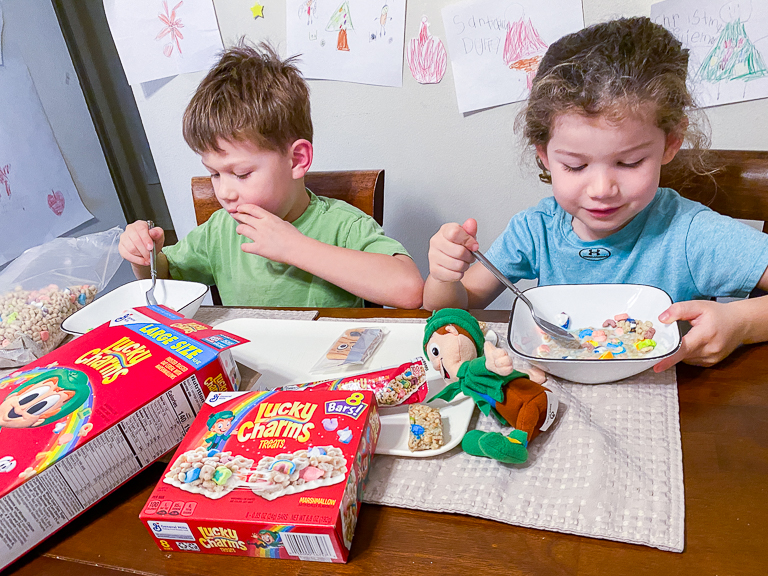 The kids liked both the cereal and the treat bars, but if they had to pick, both of them would choose the cereal. 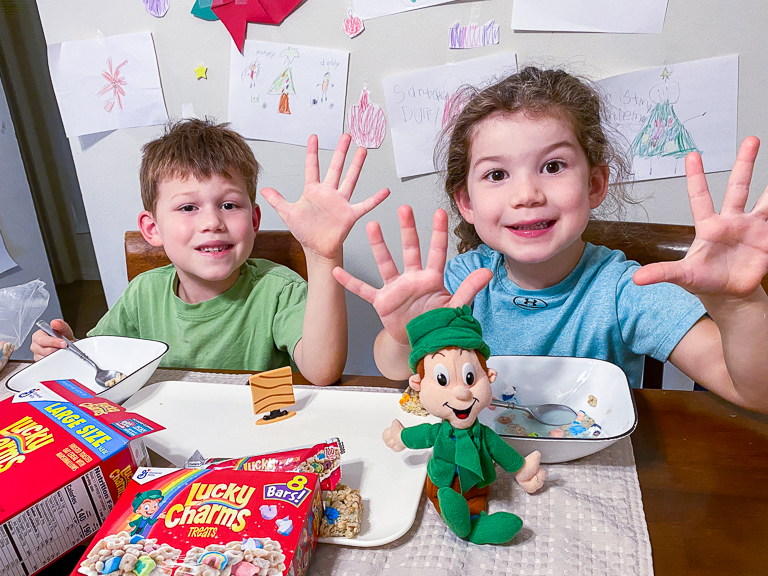 Ah, and this is why he wanted his cereal dry. He likes to save the best for last, so he ate all the cereal bits first, and now he can just eat spoonfuls of freeze-dried marshmallows. Yum! I need to find those bags of "Only Marshmallows" that I've seen before. And they weren't just for himself either. Since Grandpa wasn't here, he picked out one of each type and saved them for him to enjoy later. 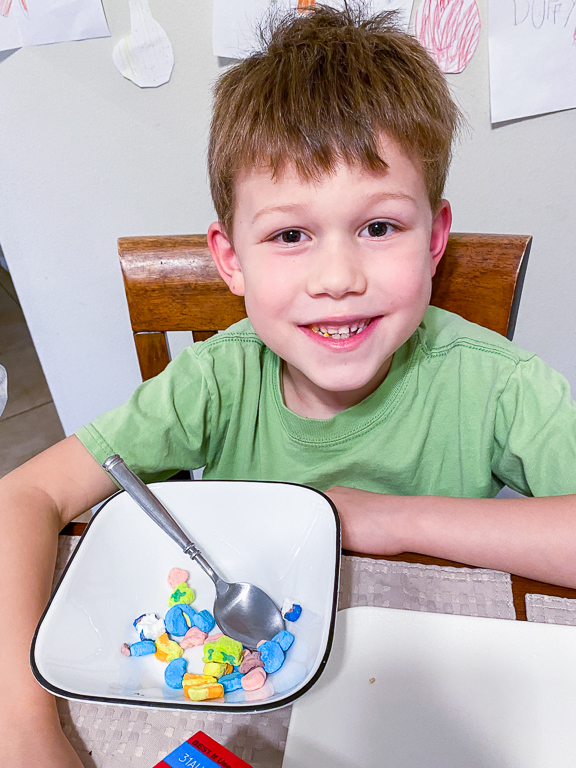 We'll keep our eyes open for even more cereal treat bars!
Posted by Joe at 2:00 PM