Last week I had fun making Holiday Pizzas for the family. There was a giant Frosty the Snowman along with a Christmas Wreath. The only real problem I had with it was that the yeast-dough I used for the crust made everything puffy and distorted a few of the shapes. I know just how to fix that problem, and it'll make a lot of people happy too.

The request I get more than any other for pizzas is to re-make our thin crust pizza we had back in October. Tonight we're going to make pizzas shaped like different Christmas items! 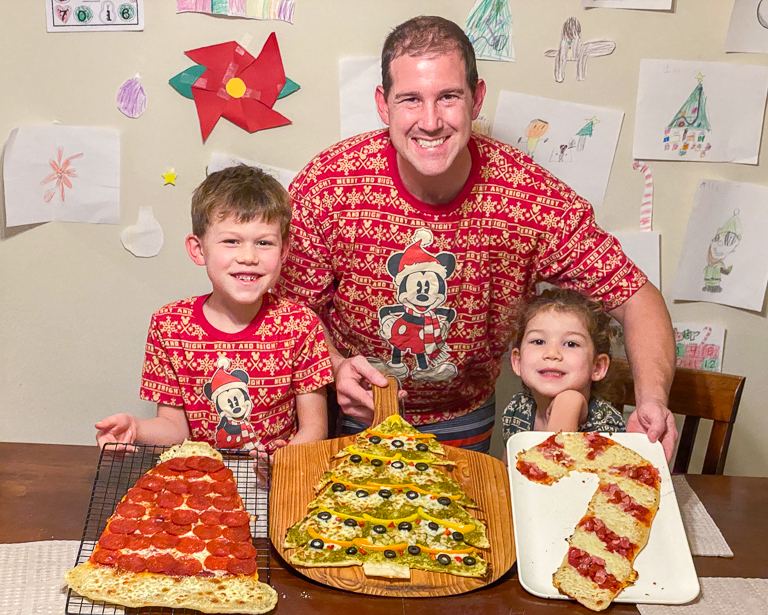 A good thing about this Thin Crust dough from tworedbowls.com is that once you roll it flat, it doesn't change shape. I used my pizza cutter to shape everything after I rolled it flat. 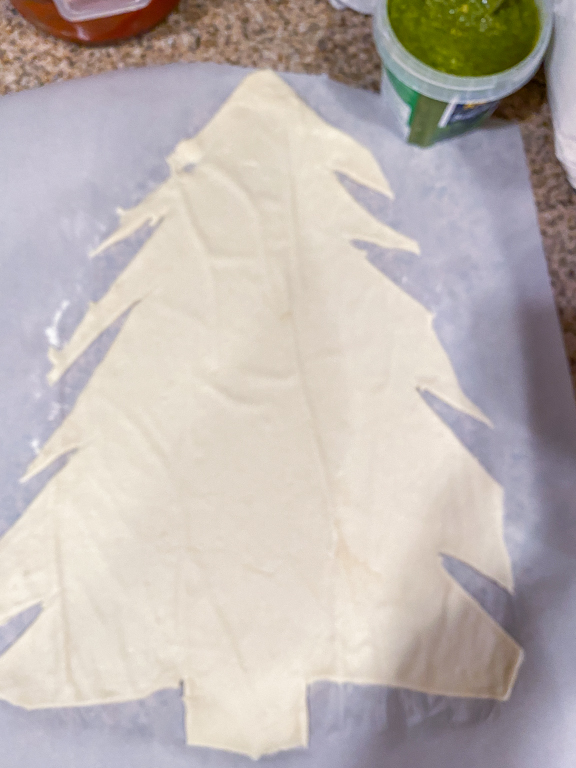 New tonight it a brand new flavor. I was trying to figure out a way to make a green pizza without putting leaves on it, and remembered that I used to love pesto sauce when I was growing up. It's been a long time since I've had pesto, and checking with Richard and Chi, they've never had it. This'll be something tasty and new, plus it'll give a great green look to my Christmas Tree. 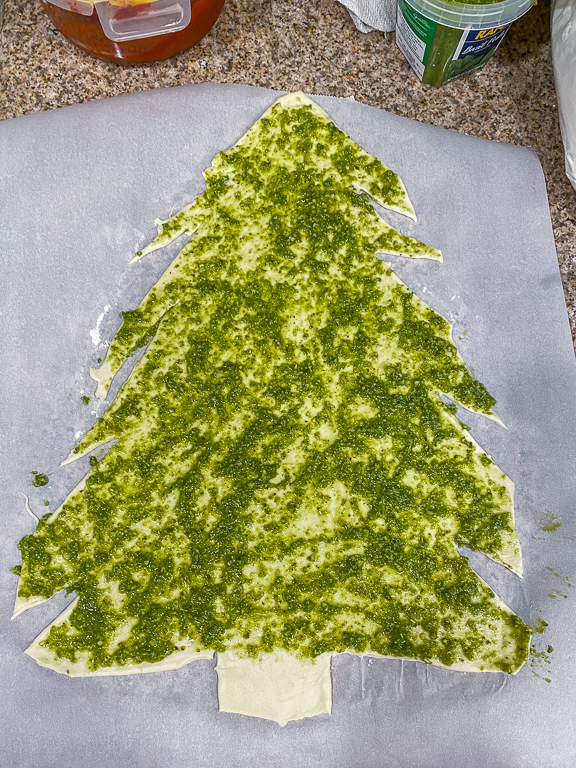 After sprinkling it with a light snow flocking of cheese, I asked Theresa if she could trim the tree. 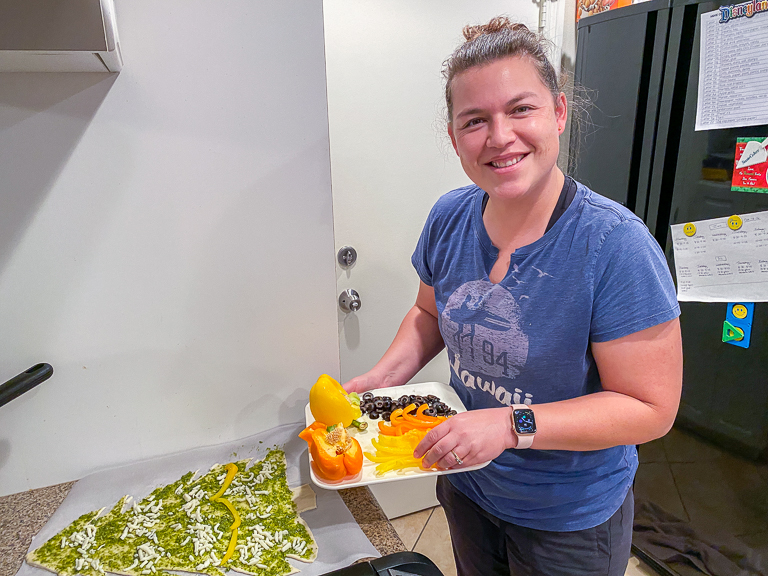 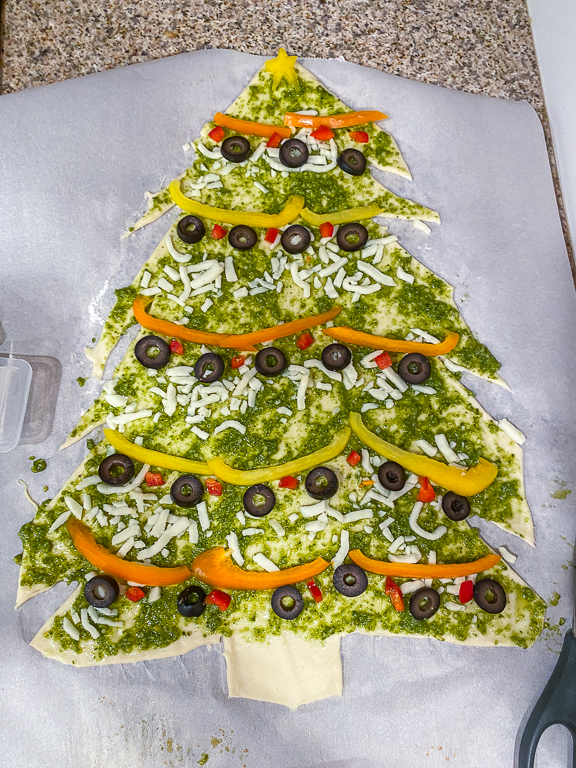 This next one I rolled out and trimmed into this shape. 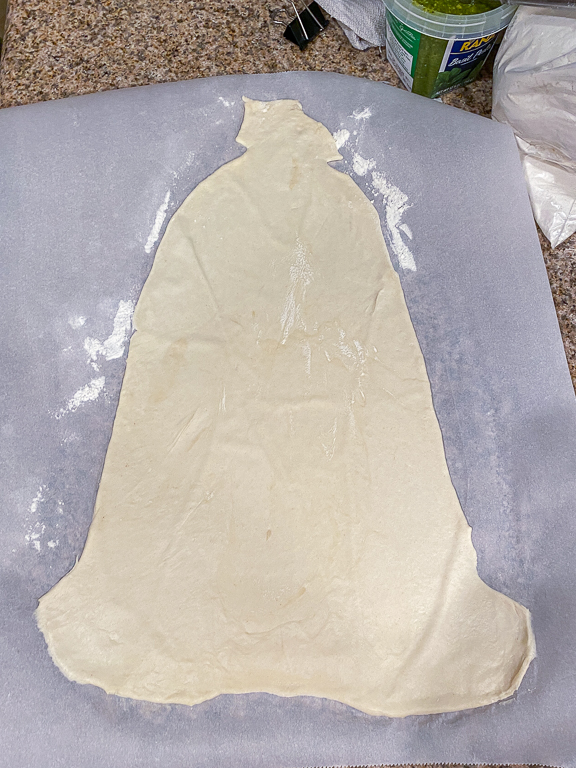 You get the idea where this one is going now, right? I used a homemade Alfredo sauce for the white bobble and lower white band. Homemade pizza sauce for the red stocking part. 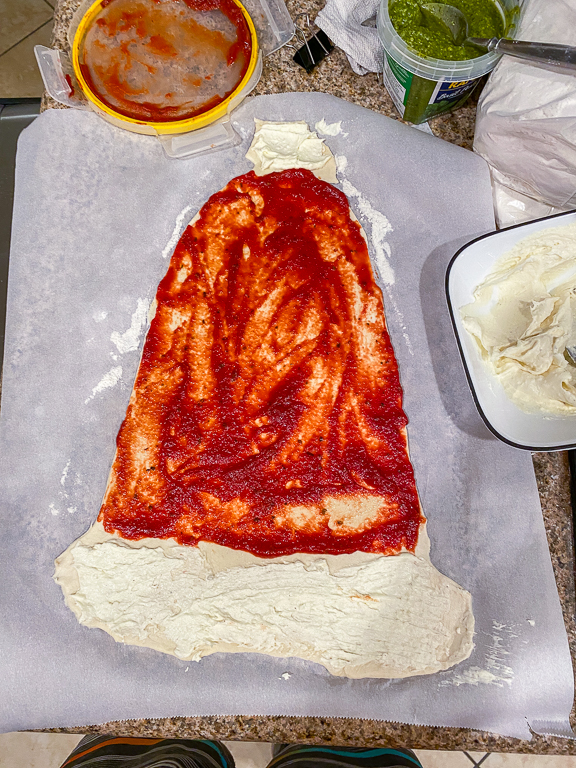 A little cheese all over and then enough pepperoni to cover the entire stocking portion of the hat and this one is good to go. 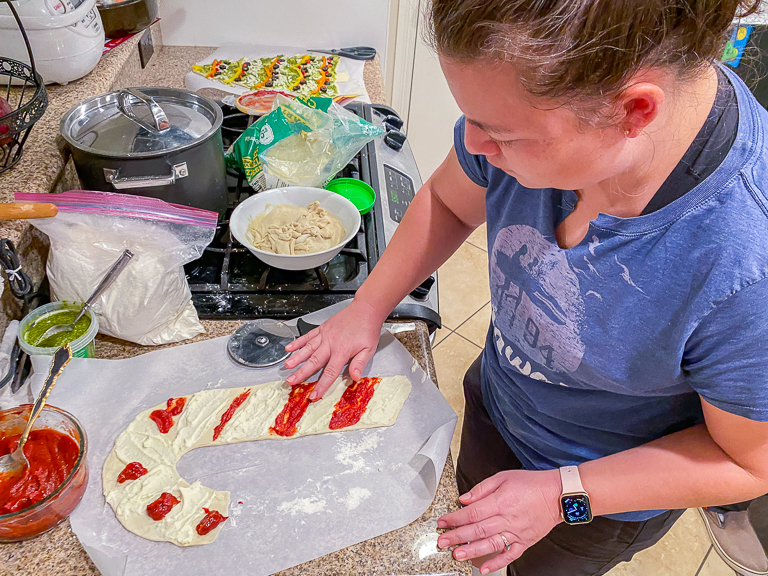 The white parts got a little mozzarella, while the red parts got some diced ham and pepperoni. 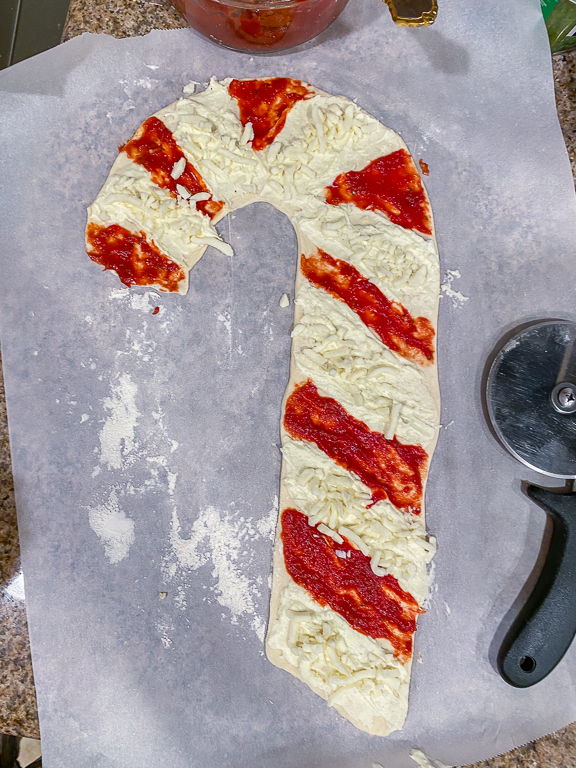 The kids were pretty excited to see the Christmas shapes, but even more excited to hear that it was thin crust pizza. 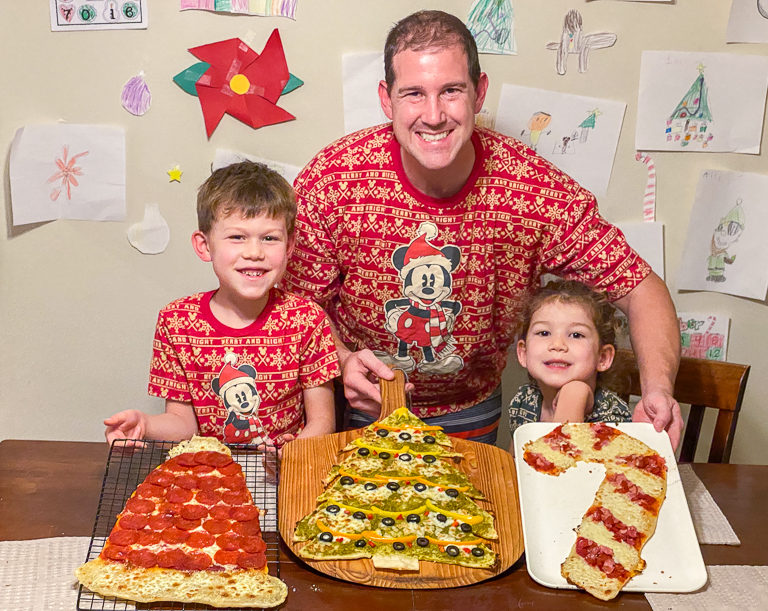 The tree turned out even better than I could have hoped. 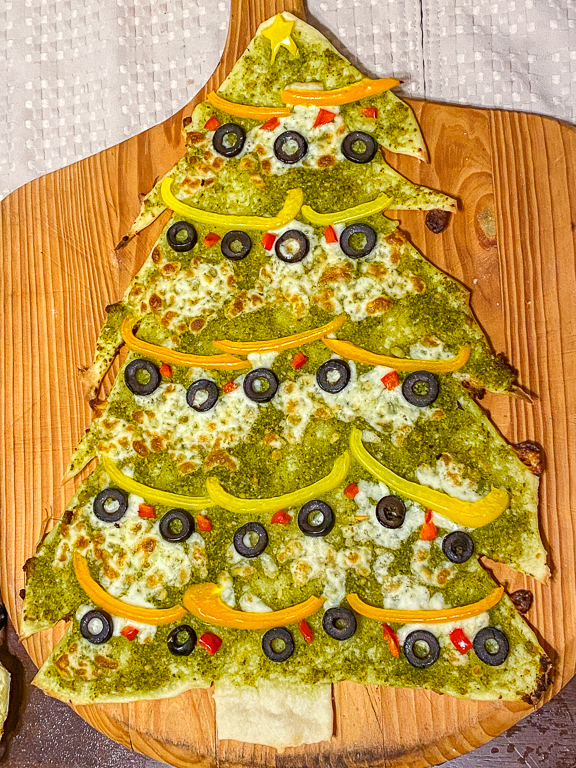 There's even a yellow bell pepper star on the top. 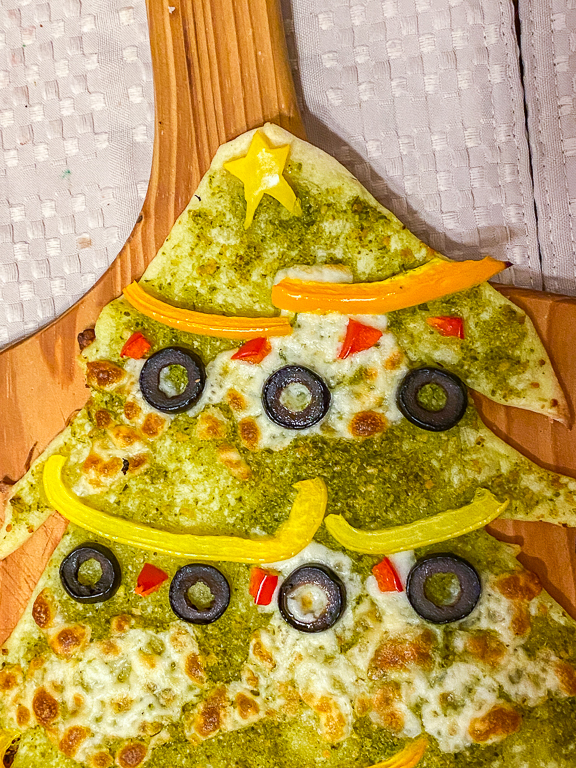 The shape of this Santa hat probably could have been better, but the idea is there. 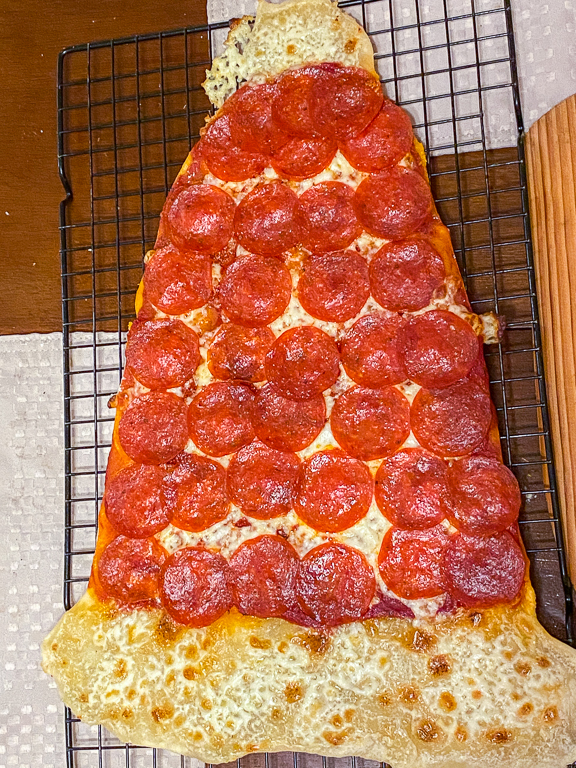 This candy cane pizza is pretty adorable. I really happy with how this one turned out too. 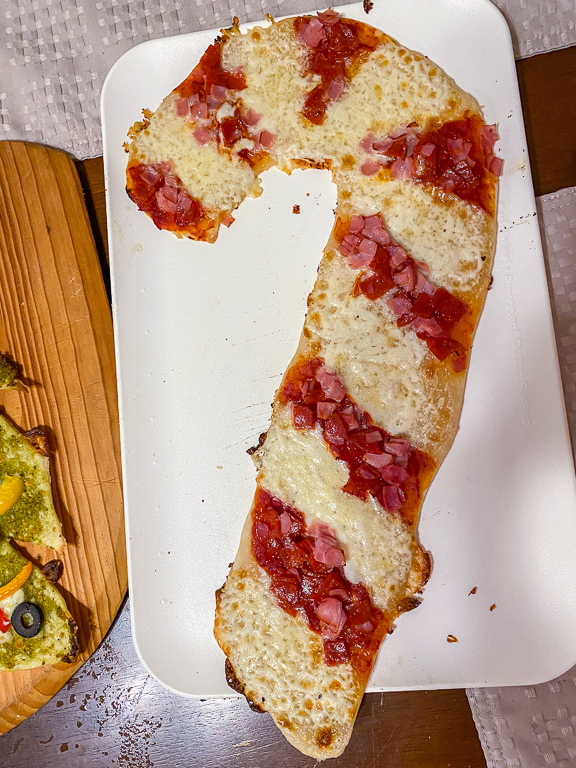 Not making the main picture because it didn't really look on par with the rest, was this little "present" pizza. White sauce on top with a bow made of pineapple chunks. On the bottom is a red box with a yellow bell pepper ribbon. 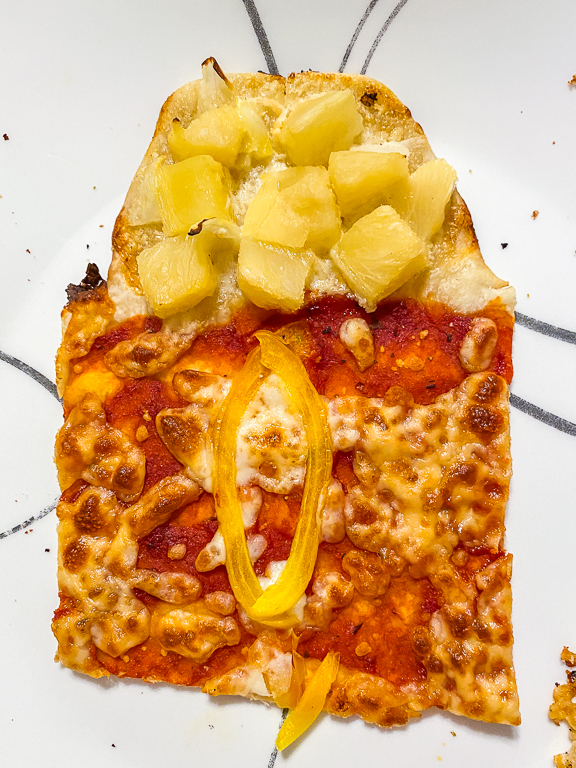 And just cause I felt like experimenting, with the bits of dough I had left over from the trimming, I rolled them flat, used my gingerbread cookie cutter and baked them plain. They turned out like little crackers. 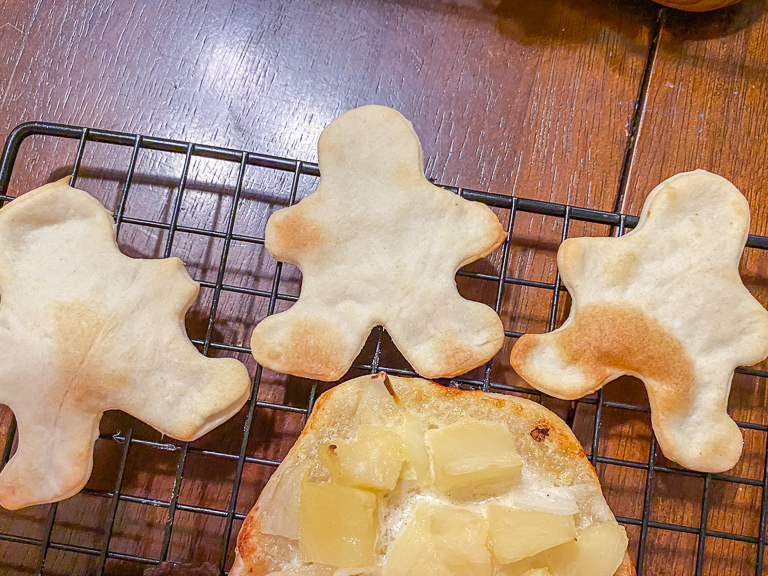 I know what this boy likes. His favorite pizza is plain pepperoni, so I cut him off the top of Santa's hat, including the bobble. If you remember from the last time we had thin crust Ian ate a half pizza by himself. Tonight he did it again, having slice after slice of his favorite style pizza. 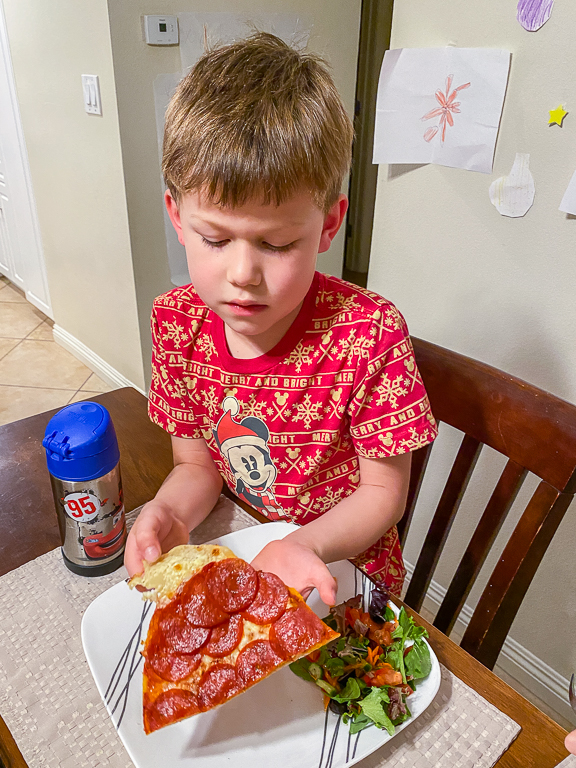 Alli is my adventurous little eater. She wanted to try the Pesto pizza, so I sliced off the top of the tree including the star and gave it to her. She tried all 4 different kinds of pizza plus had a salad on the side. 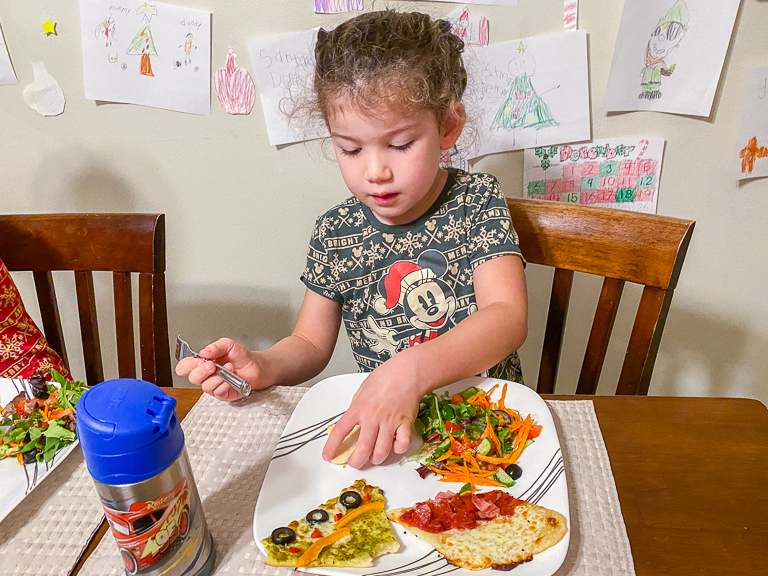 Theresa was happy with her Candy Cane pizza. 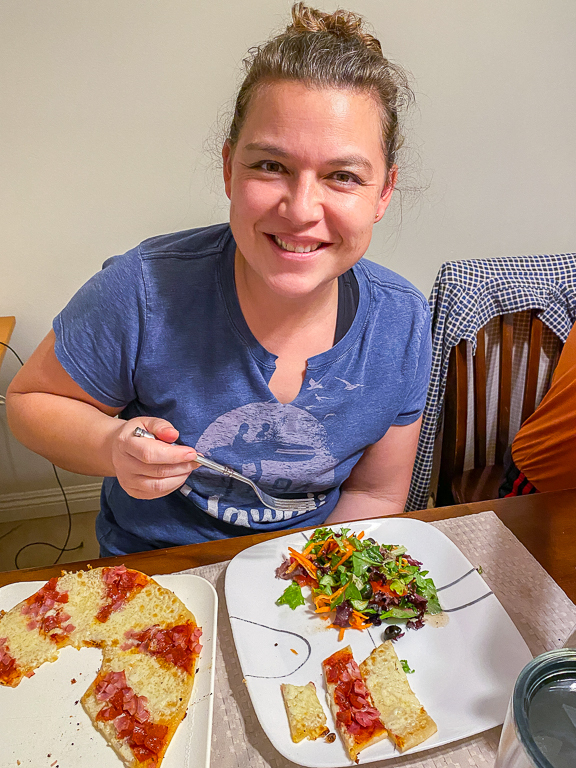 Favoring the ones without red sauce, she's cut strips out of the different candy cane stripes. I'd said that Richard and Chi hadn't had pesto pizza before, but they thought it was delicious. Chi loves the basil flavor and said it is now one of her favorites. Richard said I might be tired of hearing it, but he'll say it again, he thinks I make some really good pizzas! 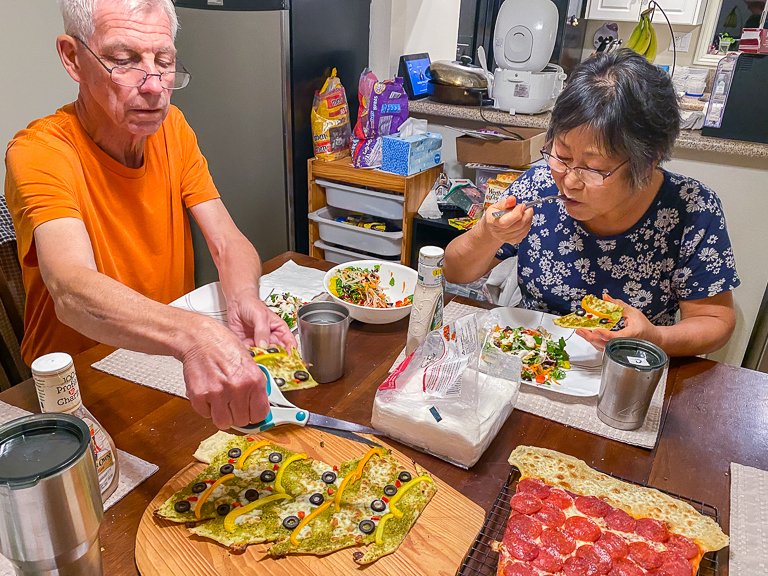 My plate includes a little bit of everything, including the green stuff. Pesto is still really tasty! 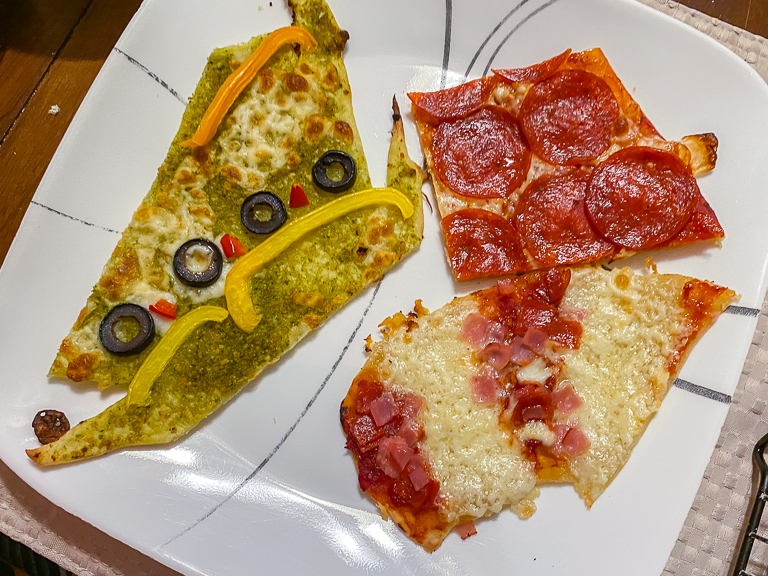 And my little gingerbread shaped friends were really tasty dipped in a little alfredo sauce. Christmas Pizzas were a big success! 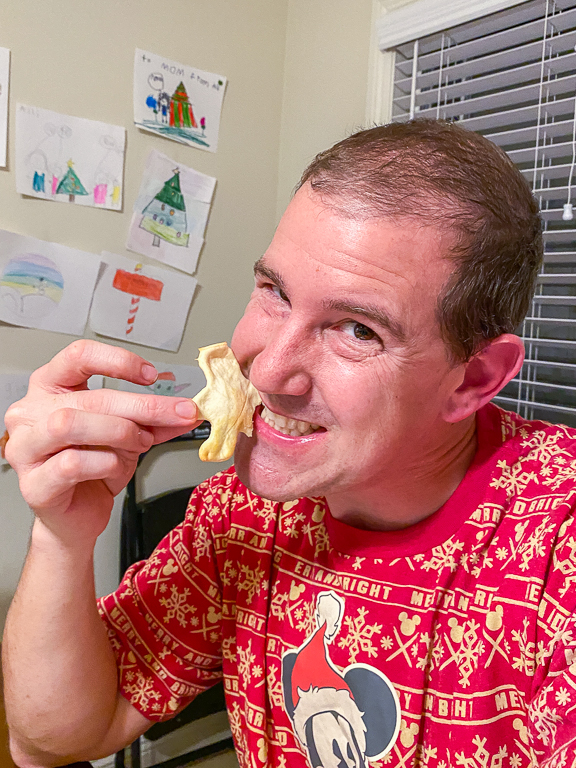