Merry Christmas! One thing I really enjoy about the holidays is looking at all the festive Christmas lights. I love getting out and seeing the lights in our neighborhood. The surrounding neighborhoods like Sleepy Hollow are fantastic too. This year, things are getting changed up a little bit though. With social distancing, there's not an easy opportunity to walk around Sleepy Hollow. There's lots of traffic and I'd heard from neighbors that cars get backed up for miles. We've got another plan though. Read on. 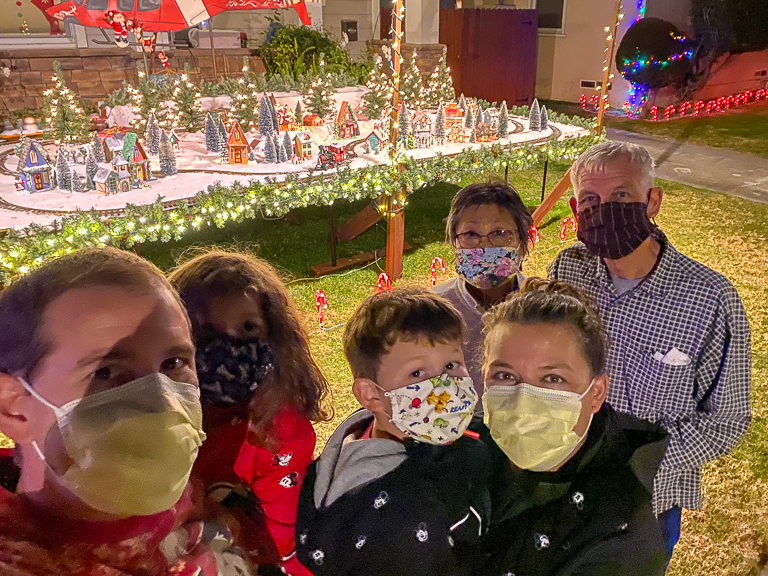 On weekends, we regularly ride our bikes through the back streets of the quiet neighborhoods. On some of those rides we come across houses that look like they're pretty well set up for Christmas. Seeing them in the day though just isn't the same. 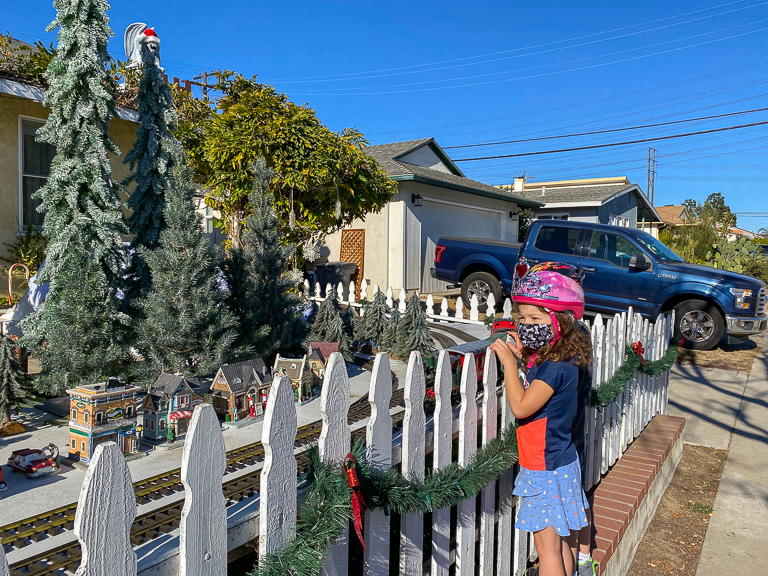 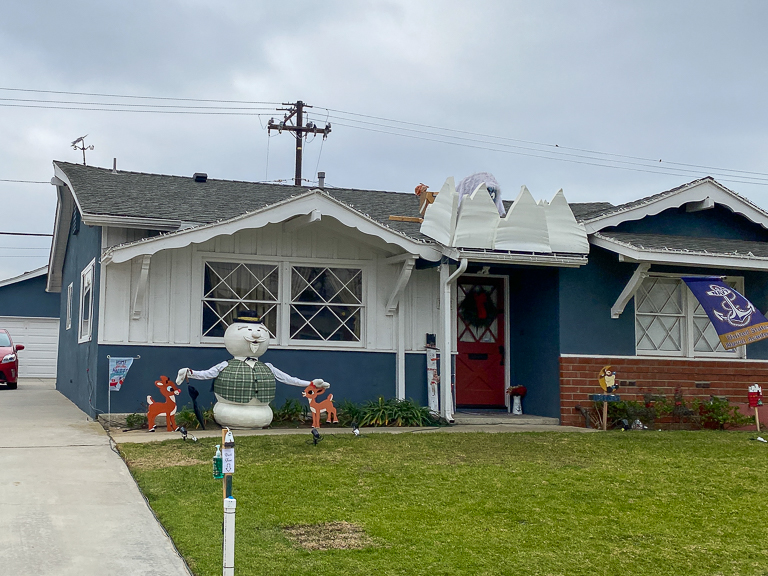 Our normal nighttime routine has us going for a walk after dinner. We've explored so many different streets throughout our neighborhood looking for new light displays. Alli is quick to remind us as soon as we step out the door to turn on the Christmas music as we walk.
I love that the kids hold hands as they walk together. It's great that they've got each other while we're going through this whole quarantine, and even better that they get along.
Because we're doing so many walks at night, we've had to be more cautious with all the cars seeing us. We can see them easily, but it's not always clear they see us when we're in a crosswalk. And so we're going to open up one Christmas present just a little early. 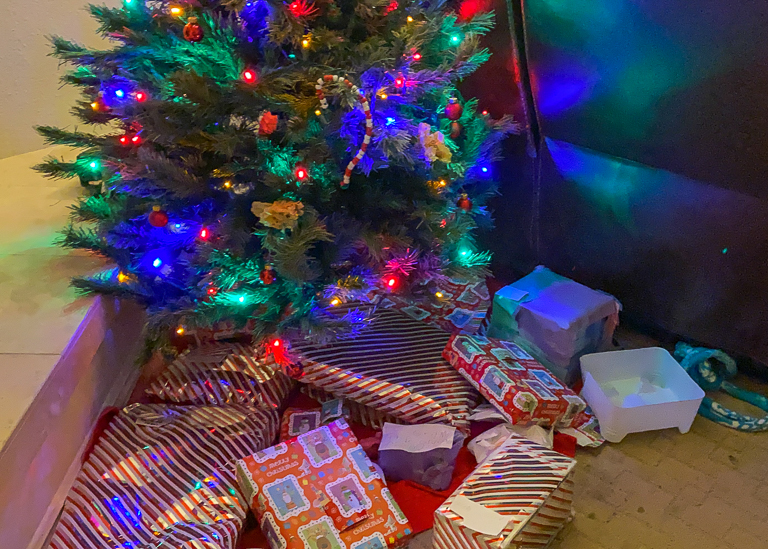 They don't know what it is, but it'll be clear shortly. 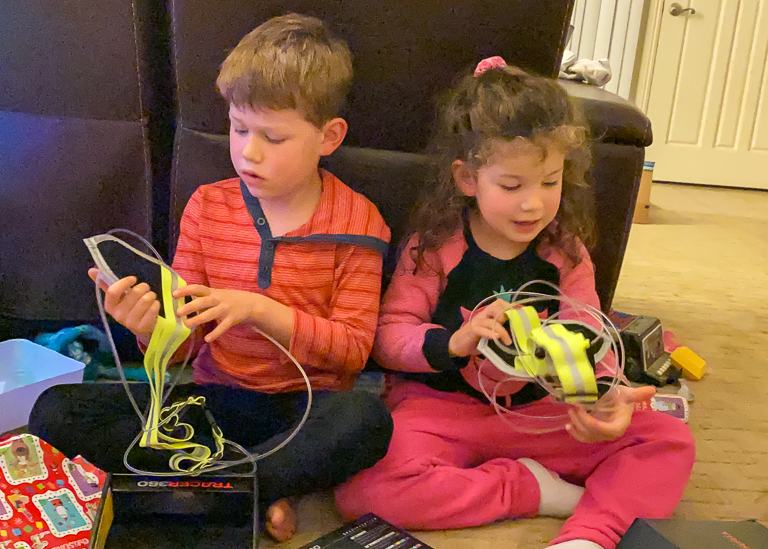 Light vests! Now we can easily be seen! Plus the colors are selectable so we can be walking Christmas colors in red and green. 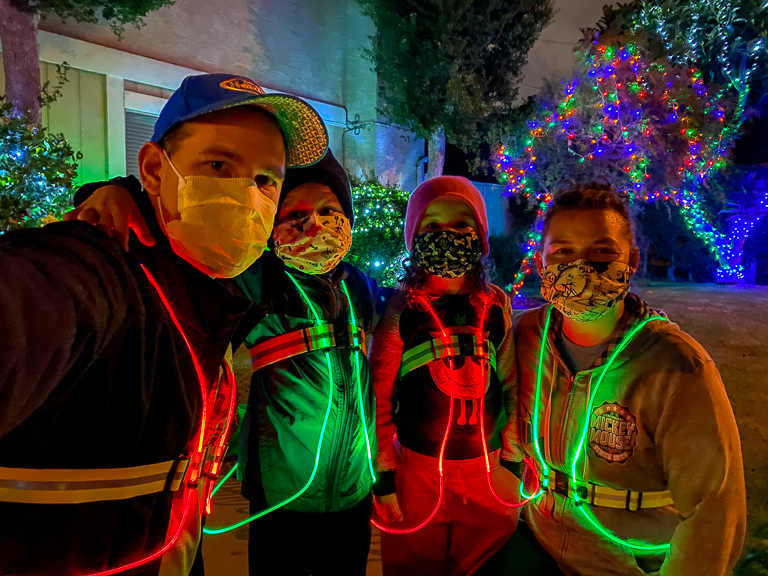 We've walked our neighborhoods multiple times, but now we can get out and expand our range. We can easily cover a few miles each night on our bicycles, stopping at the houses we want to. Honestly, going on bikes is my new favorite way to look at Christmas lights. With our vests, headlights and taillights on the bikes, we're easily visible to cars. 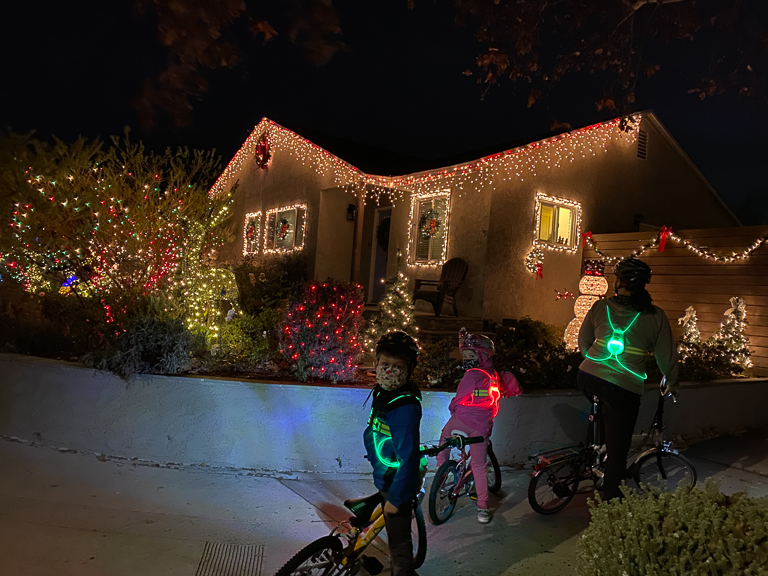 A video of some of the highlights.
We spent multiple nights going out exploring the neighborhoods finding all our favorite houses. 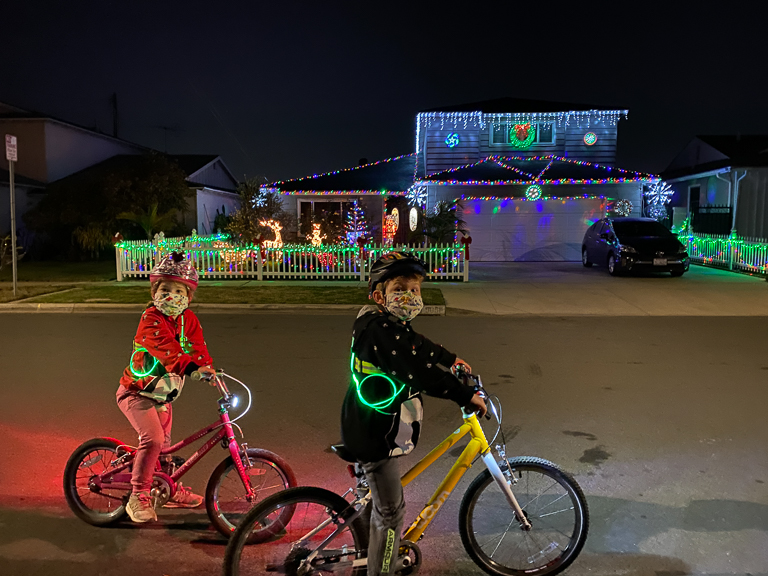 Watching a house that has a train and village set up in their front yard. 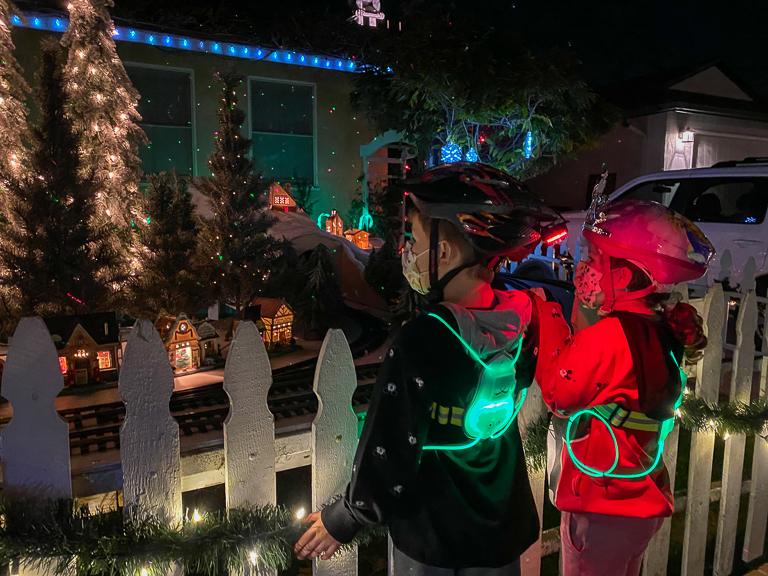 That village take a bit of power for all the lights. 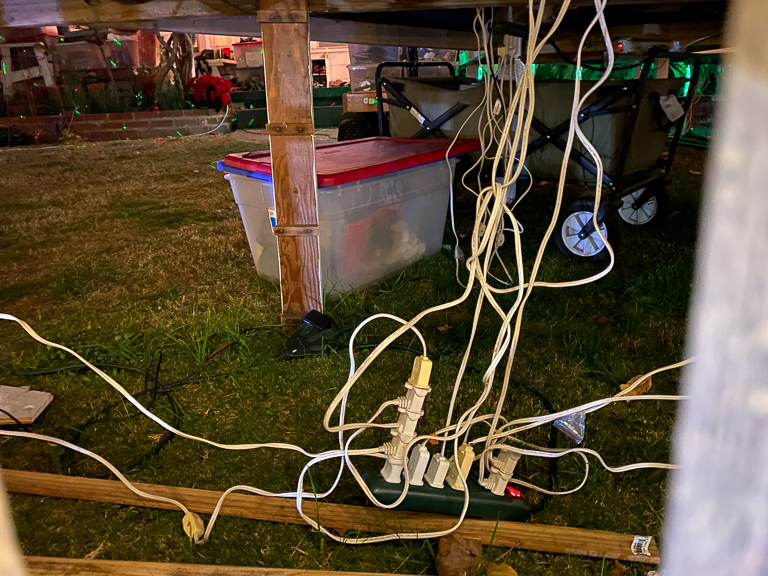 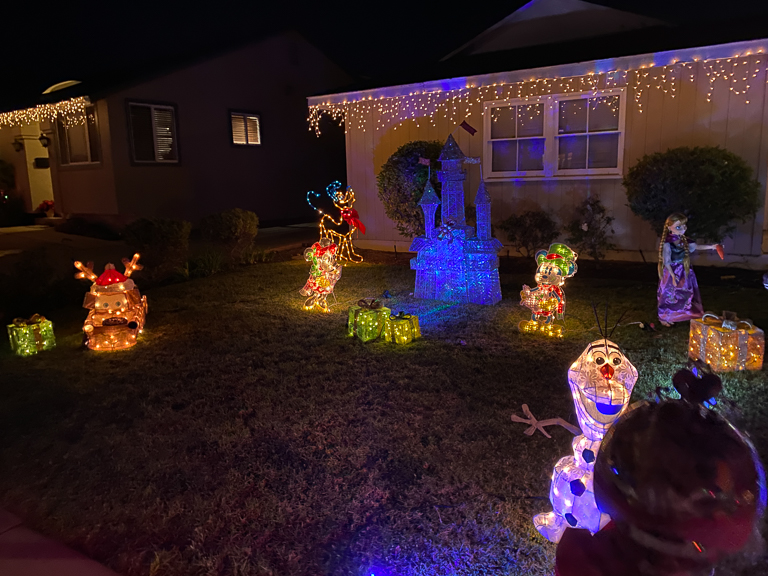 With princesses, Cinderella's coach, and even a "hidden Mickey" on the porch. 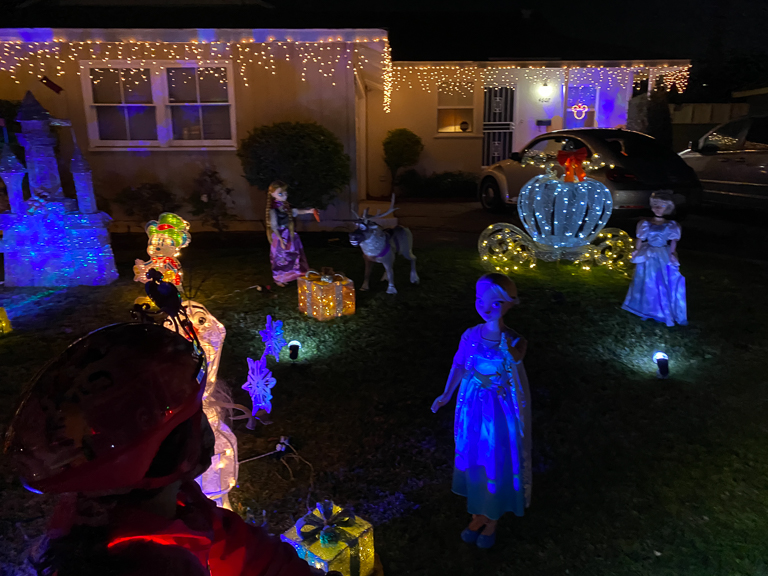 This house had a functional Ferris Wheel, Merry-Go-Round, and even a Sky-Bucket ride. 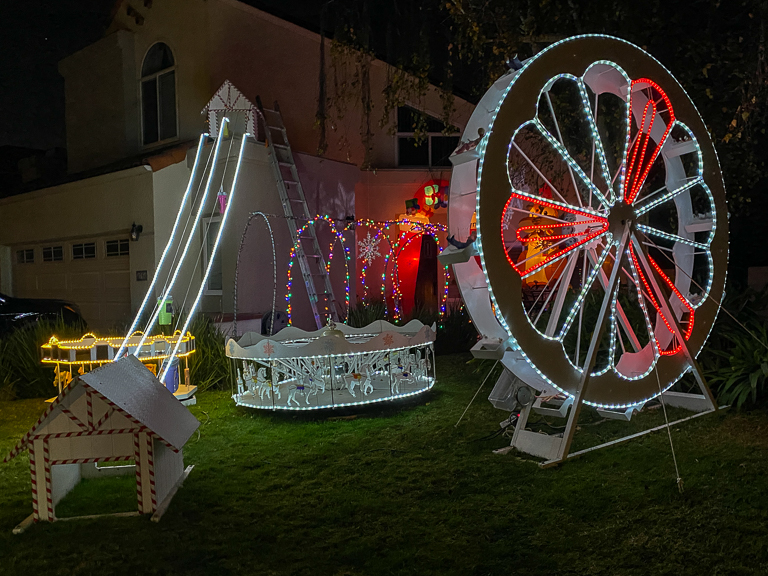 Alli said we just had to stop at this house and take a picture of this Woody for Grandpa. He loves the movie Toy Story and the kids want to show him everything related to Toy Story that they ever find. 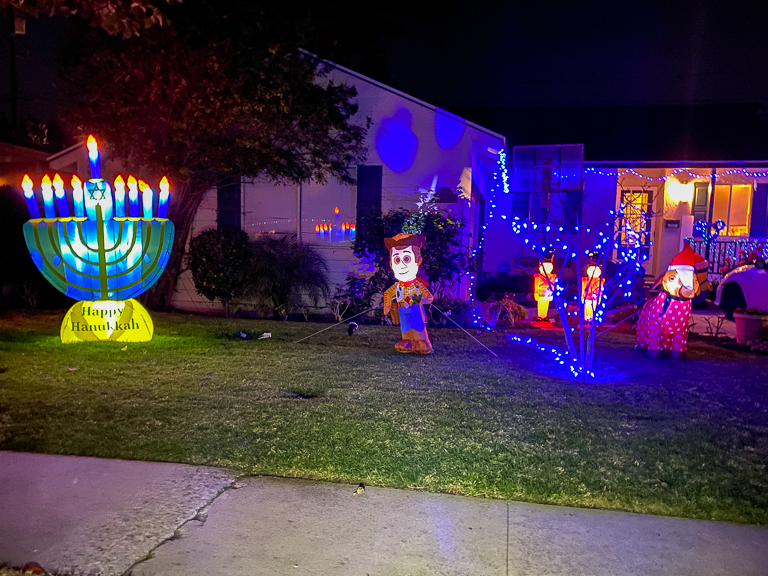 This tree wins for being the best decorated Christmas Tree we've see this season. It's a big pine tree and there's lots of lights circling the entire thing, a row of candy canes on the bottom near the tree-house, and lights around the trunk. Early in the season there was a bright star on top, though it went out and hasn't come back.
I happened to catch the owner outside and asked how he got all those lights up there. He said "Four beers, then climbing up into the tree to string them up." It looks amazing. 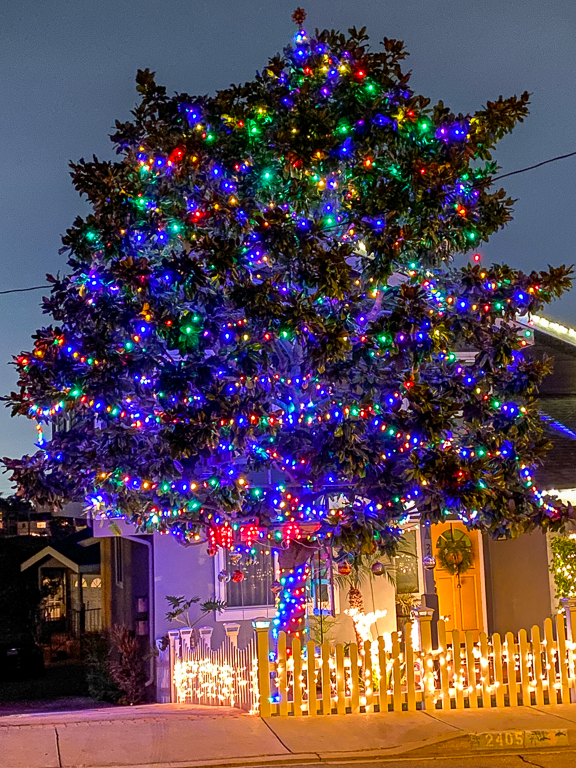 No matter the route we'd take on our bikes, the kids always want to go by this house. There's not a lot going on in the way of decorations, but they have a countdown timer on the porch telling us how close it is until Christmas. 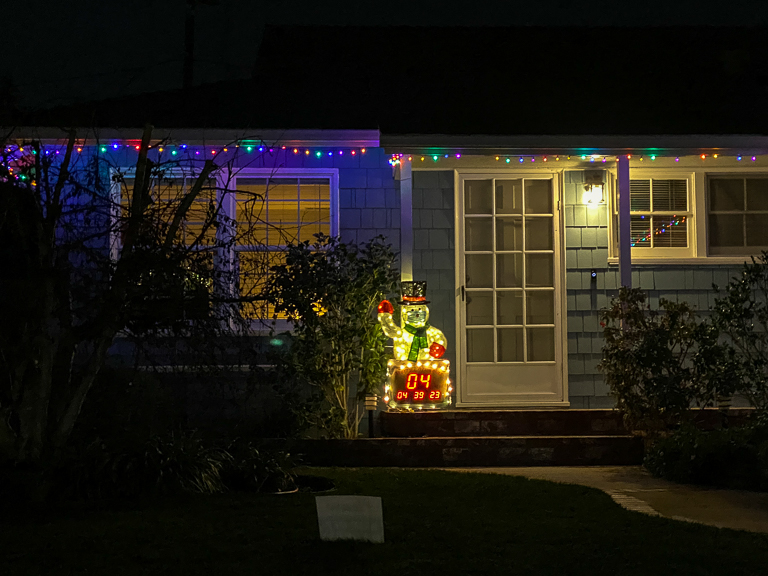 This house has the biggest display we've been seen in all our nights out this year. It would also become a regular stop. 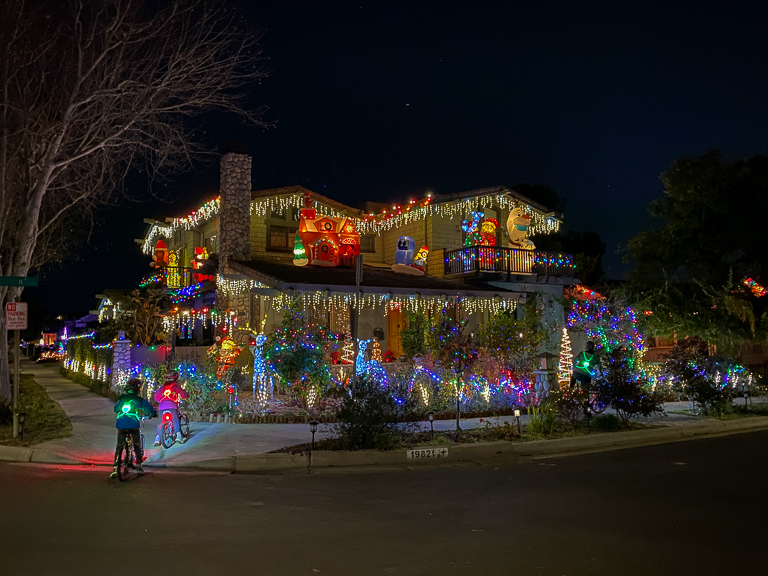 It's a penguin Christmas party. 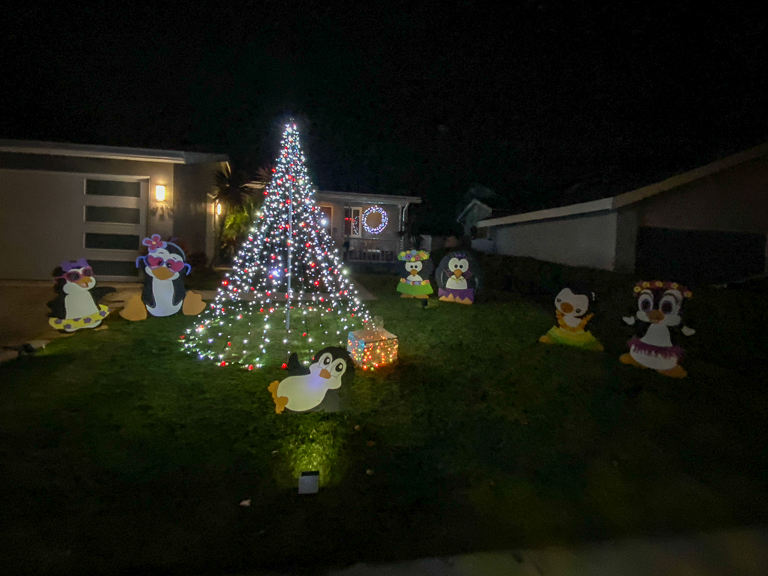 After going out all those nights, we have an idea of where the great houses are. A few days before Christmas, everyone loaded into the car and we went out for a night of Christmas light looking. Grandpa just loves trains, so we had to take him to see all the train displays we've found. 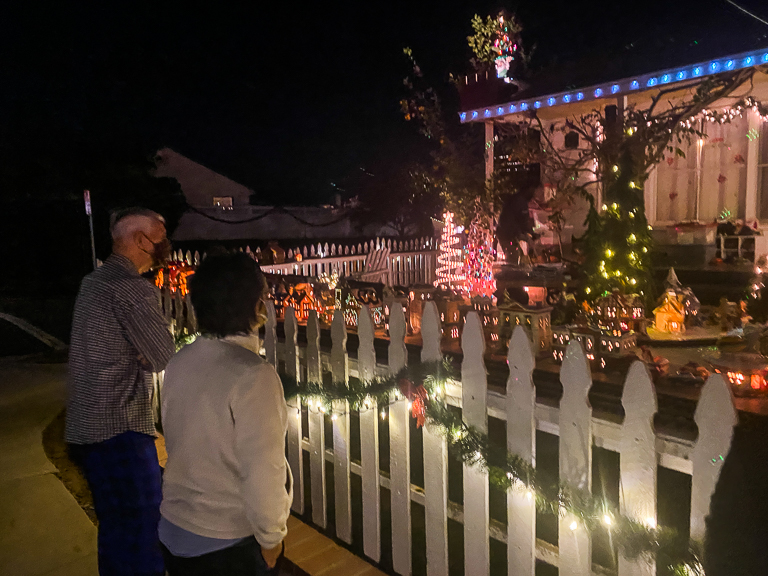 There's two tracks going on here, plus a bunch of light up houses. 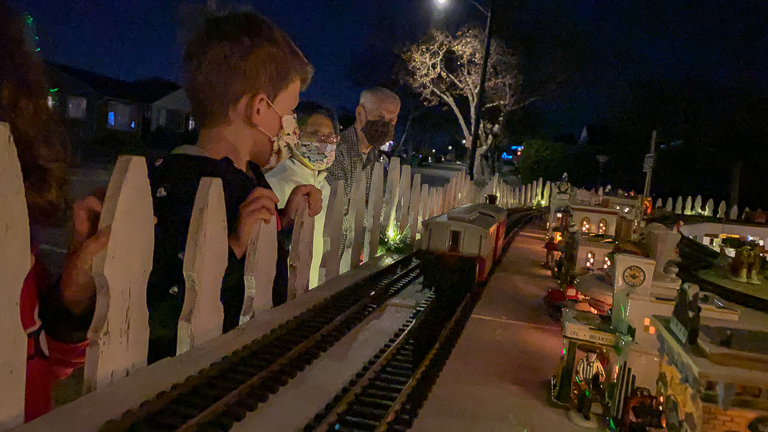 This next house has four different trains going around the tracks. 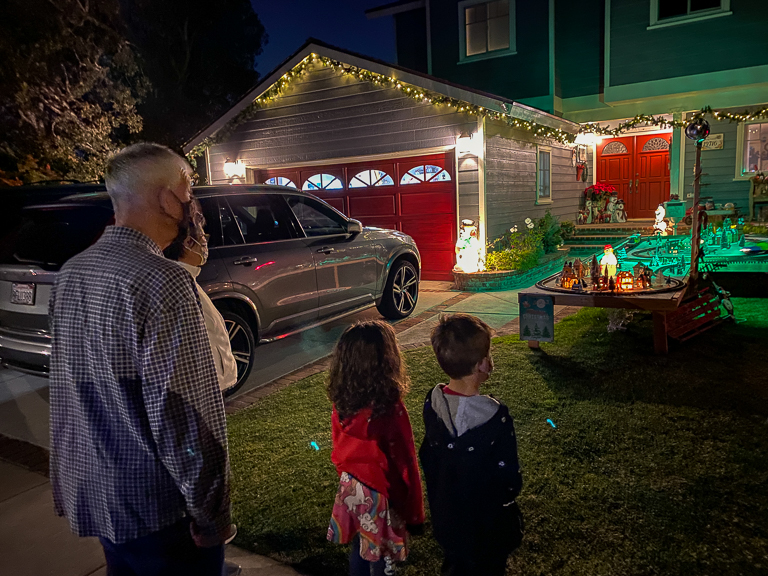 And this final house with the train has a very clean setup with a village, snow on the ground, tunnels, and more. 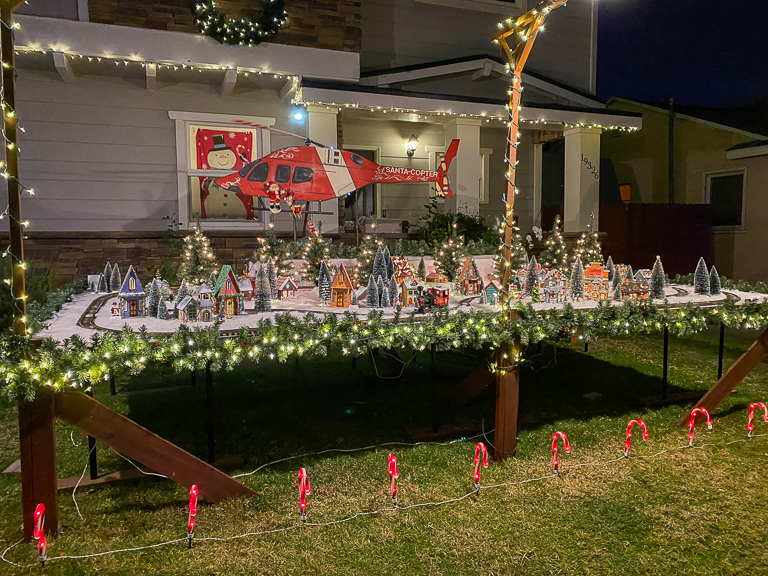 Now that it's nighttime, we all headed to the Rudolph the Red-Nosed Reindeer house and pushed the button we've been holding off pushing until we could all come here together. 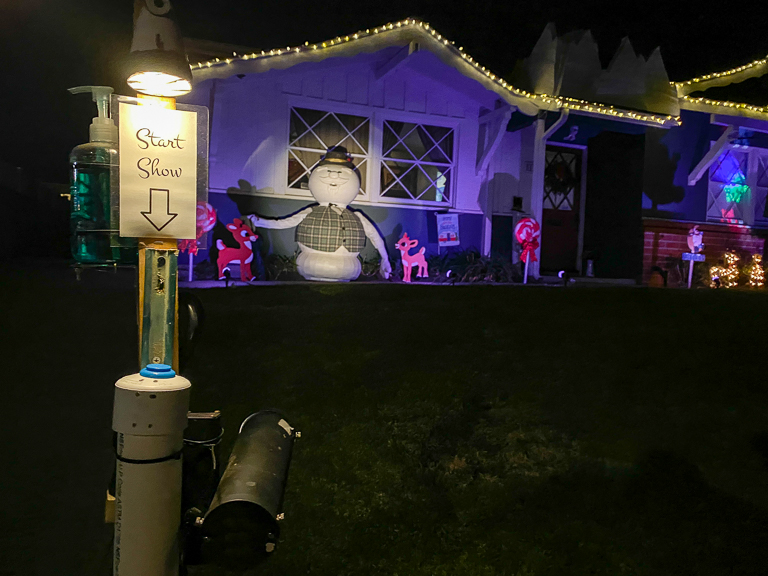 Ian said "Grandpa, would you like to do the honors?"
After pressing the button, Sam the Snowman sings the song "Silver and Gold" from the movie. Sam's mouth moves along with the music, and up on the roofline a very large Bumble raises his head up to see what's going on.
After the first round, Ian was wondering if it did anything different. 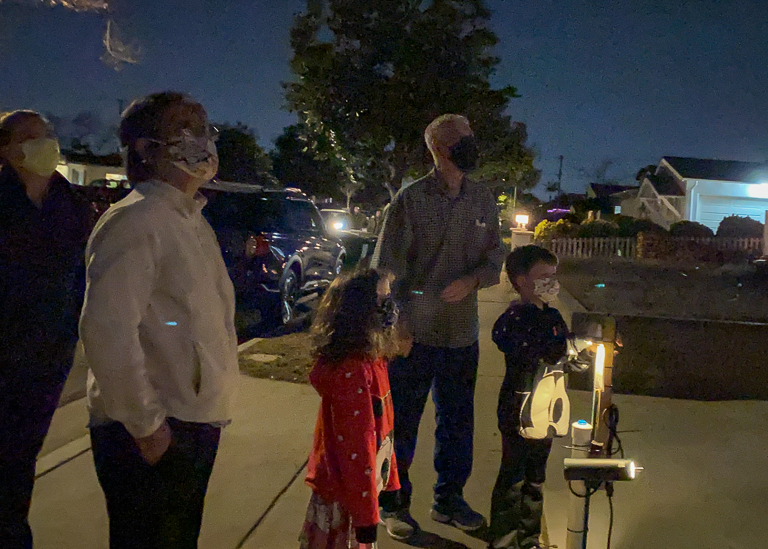 It doesn't, but it gave everyone a better chance to see everything again. Fun display! 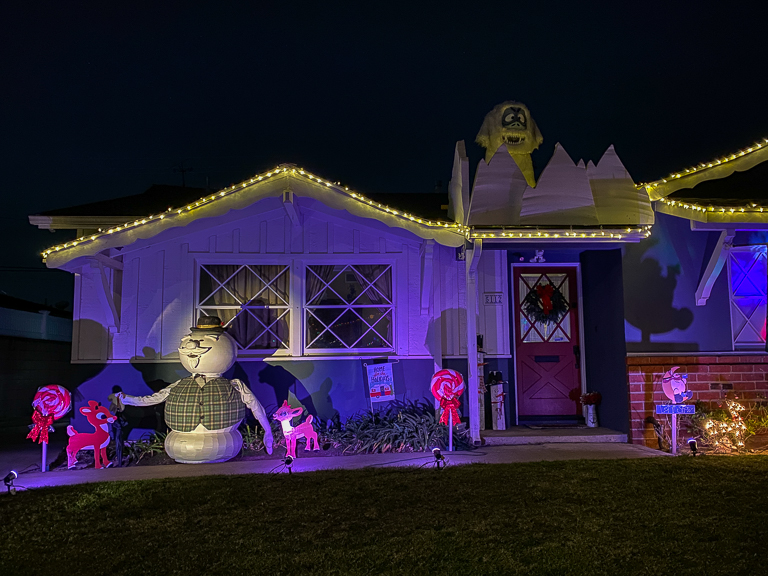 One "perk" of living in Redondo Beach is the Redondo Beach Police Officer's Association, and how every year Santa's sleigh visits every street in Redondo. In normal years, it would stop, the kids would get to chat with Santa, take a photo, and get a Peppermint Tootsie Pop when they leave. 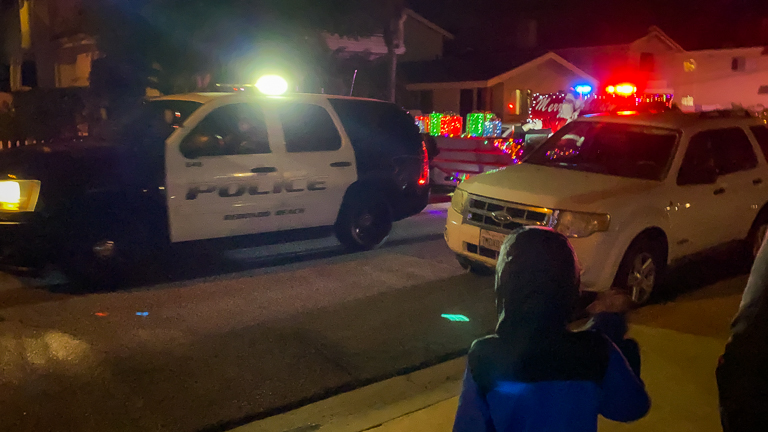 This year though, it's a quick drive-by and wave. I'm happy they kept this going despite the pandemic. 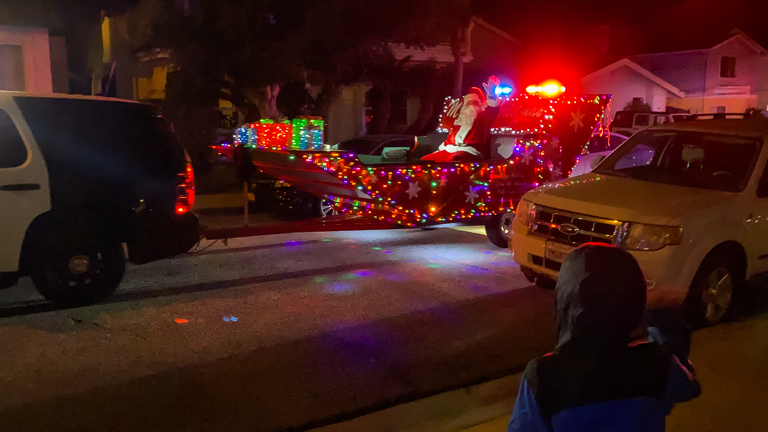 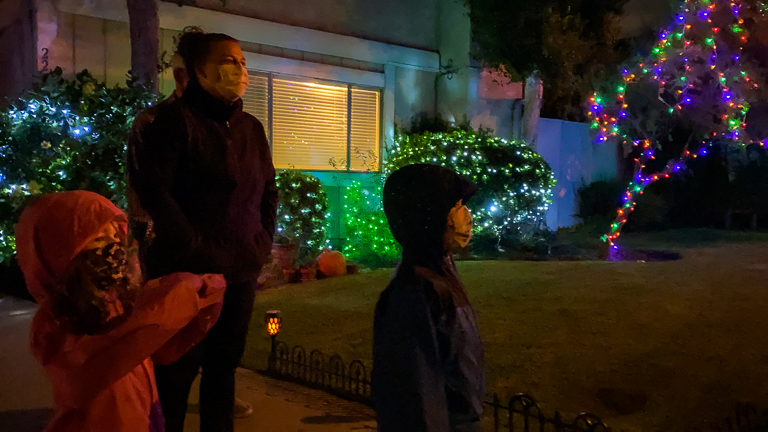 As it would happen, on one of our nightly walks after dinner, we heard the sirens and knew that Santa would be coming through this section of the neighborhood tonight. The kids got really excited for the chance to see Santa a second time. But by looking at the map, I can tell that Santa will be going up the next street in just a few minutes. By going perpendicular to his route, we were able to see Santa 5 different times, waving and shouting Merry Christmas each time.
One of the officers said that we get the award for the night. Our vests certainly make us stand out.
Fair warning, the video has lots of loud sirens.

It's been a lot of fun going out and seeing Christmas lights this season!