Alli loves helping out in the kitchen. Say you need help and she comes running. Hey Alli, do you want to learn how to make wontons today?

She ran off upstairs and came back with her apron that she got for Christmas. 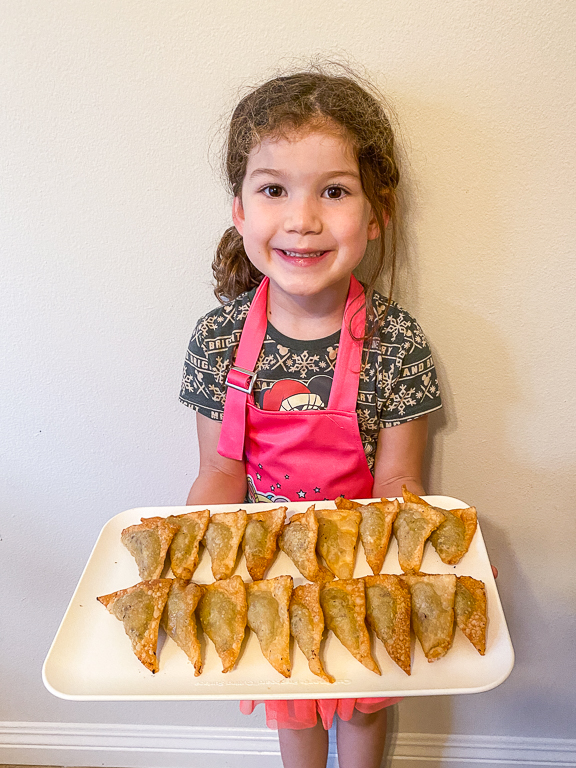 There's a whole bunch of different recipes you could use for Korean Dumplings. Theresa loosely follows koreanbapsang.com with some modifications. First you've got to peel the carrots. 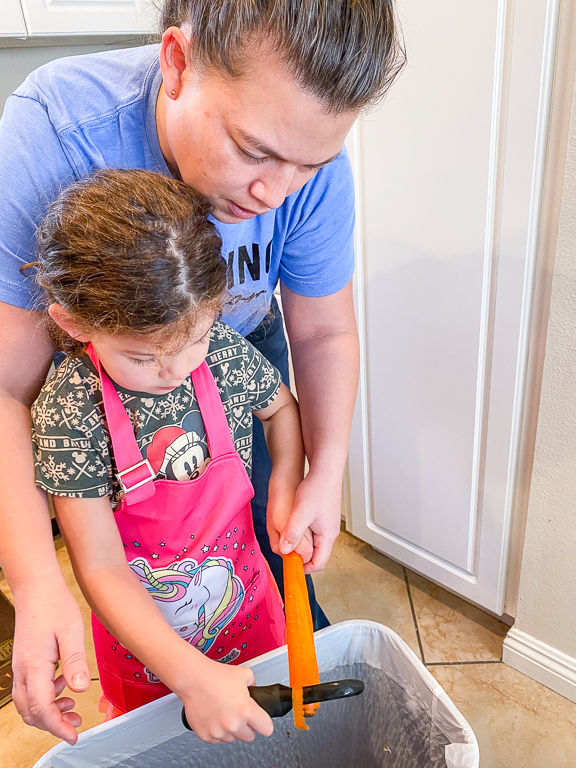 And then you take the outer layer off the onions. 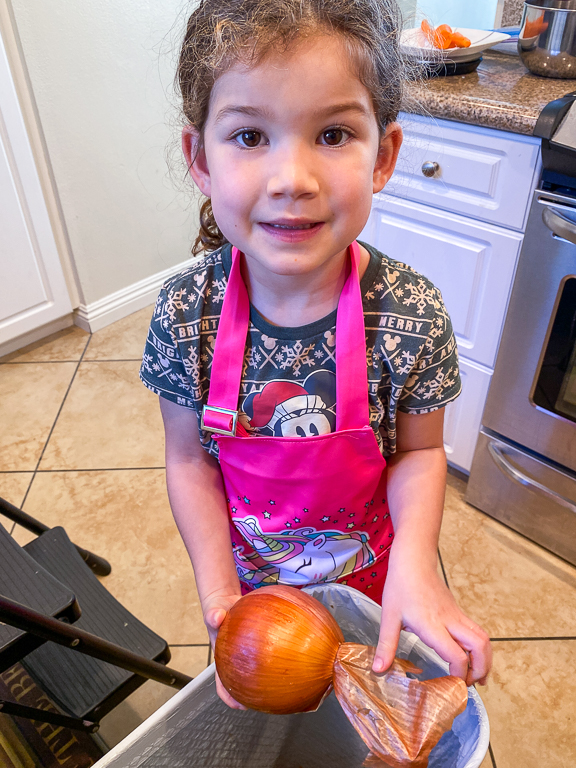 Together Alli and I ran a bunch of cabbage through the food processor. 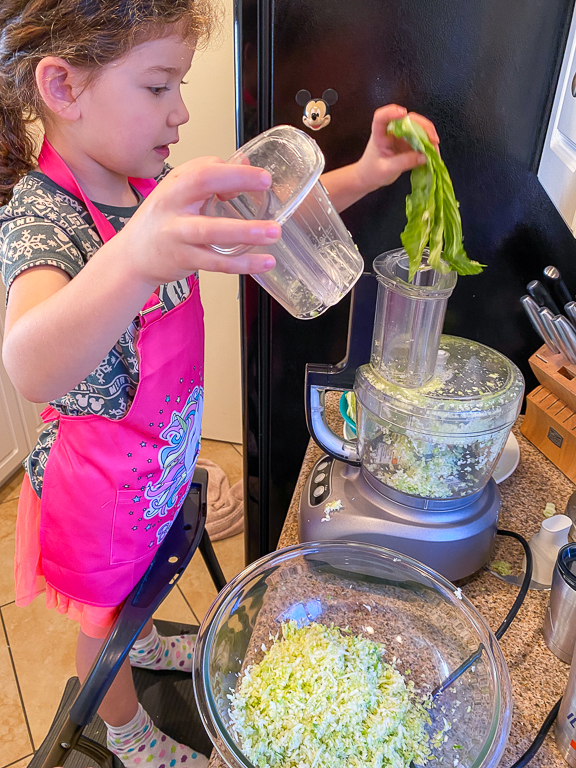 And those peeled carrots too. You're left with a big pile of grated veggies. Add some salt to that and then squeeze a bunch of the released water out of them and you're good to move on. 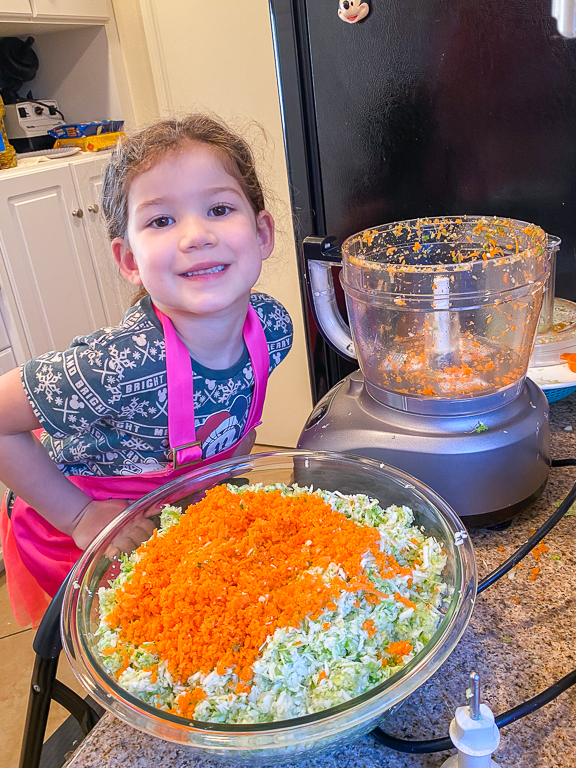 Those onions went through the food processor and all of our eyes are stinging. 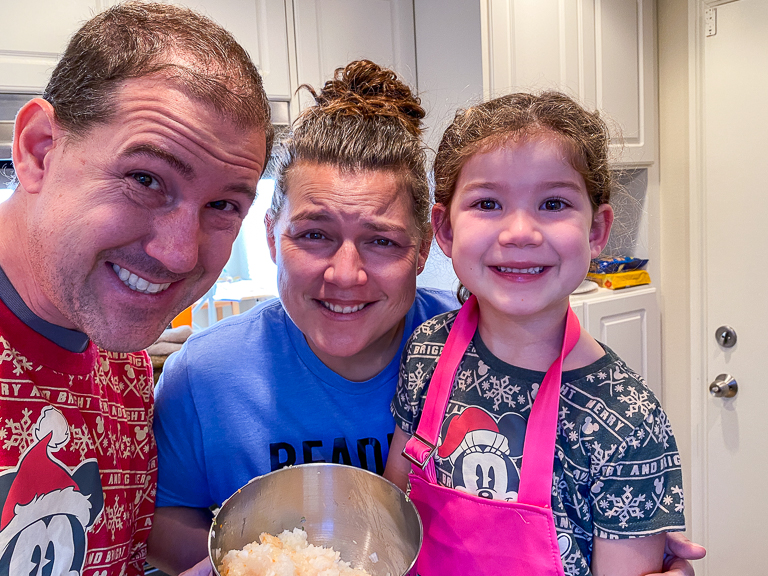 Those onions get mixed into the drained cabbage and carrots. Good thing Grammy has such a large metal bowl for mixing. 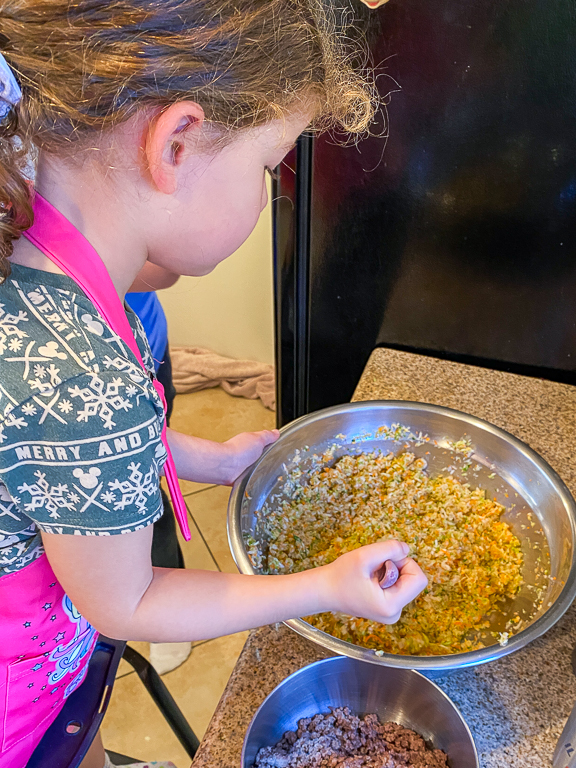 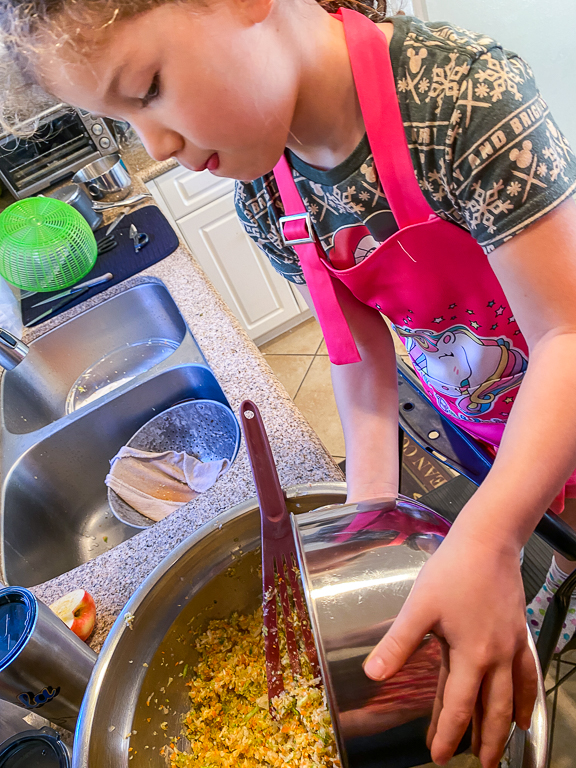 Into the giant bowl of veggies goes the ground beef. 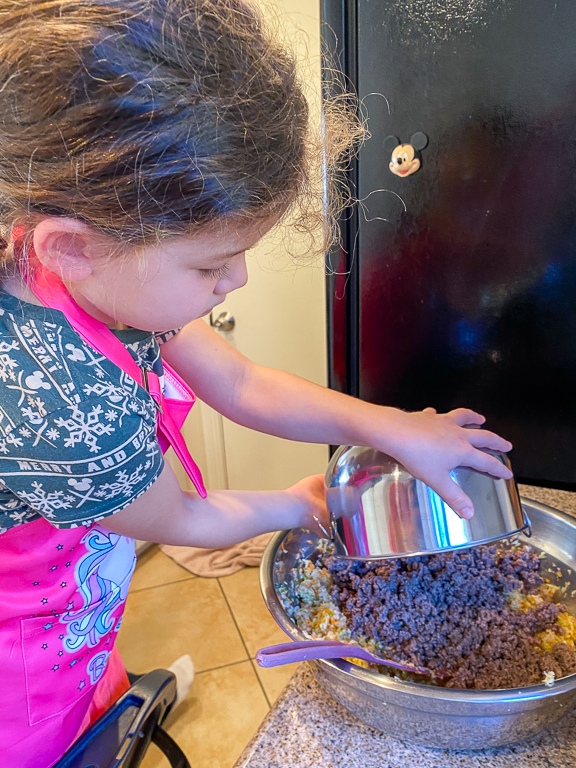 I was completely hands-off as she measured out the soy sauce and sesame oil into the bowl. She did perfectly, not overfilling it or making it spill! 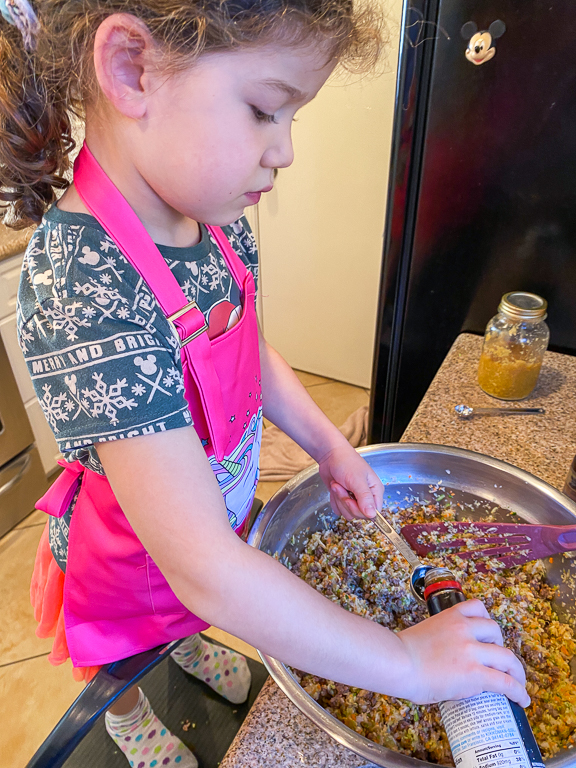 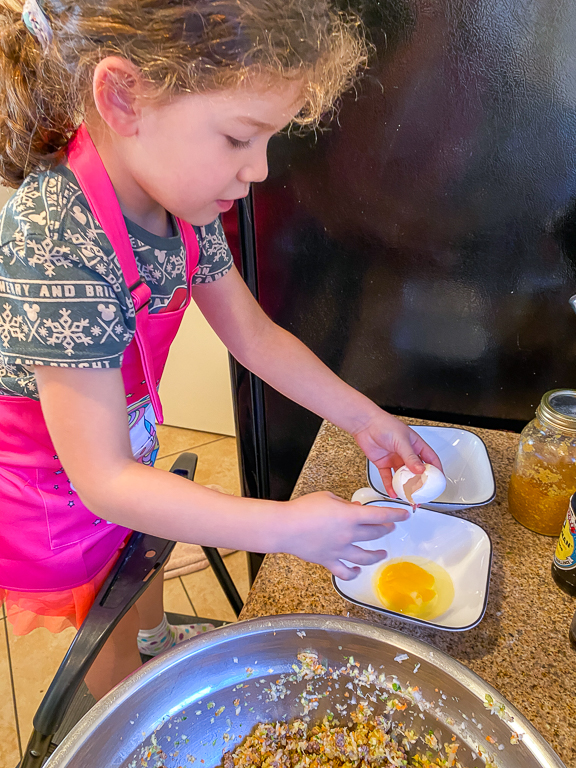 Into the bowl it goes. 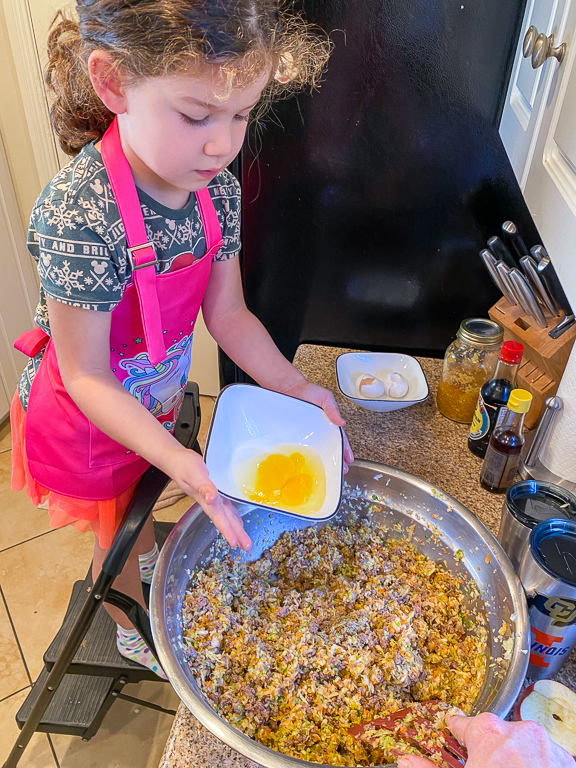 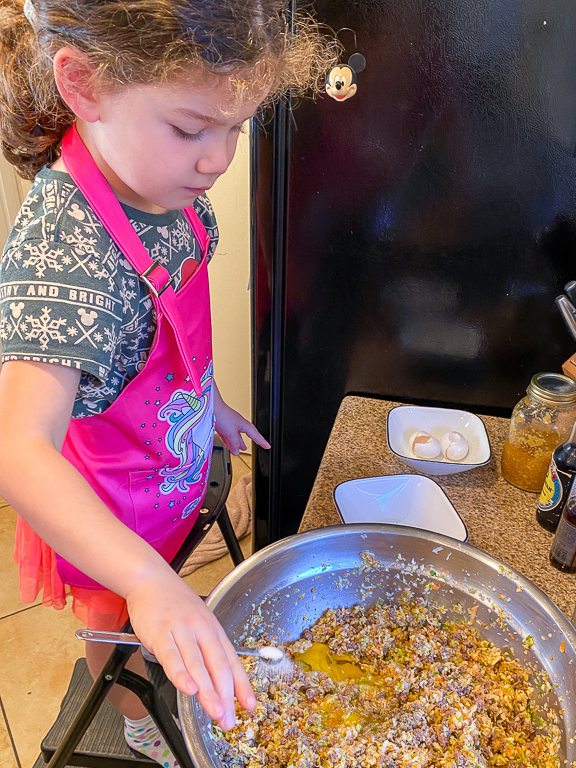 Once that was done, it was time to take her place at the table and learn the art of wonton folding from some masters. They've done this countless times and now it's time to teach the next generation. First you dip two sides of the wrapper into a bowl with egg-whites in it. 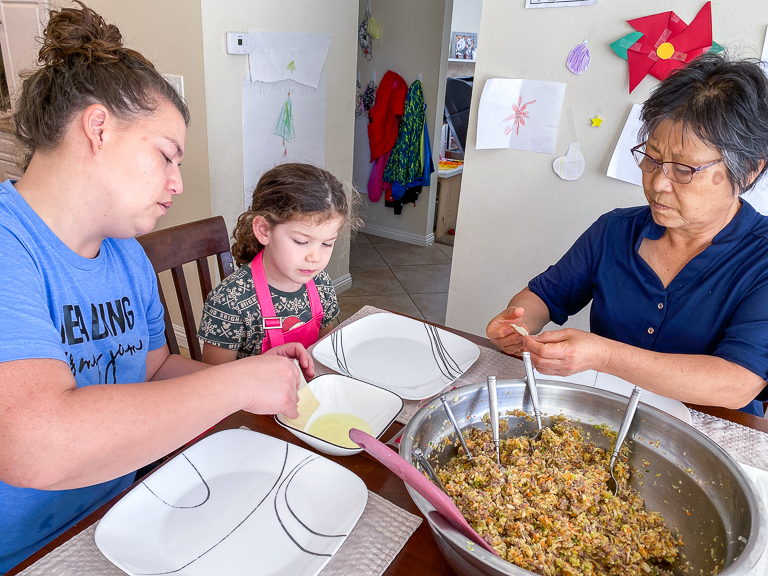 Then in goes a spoonful of filling. 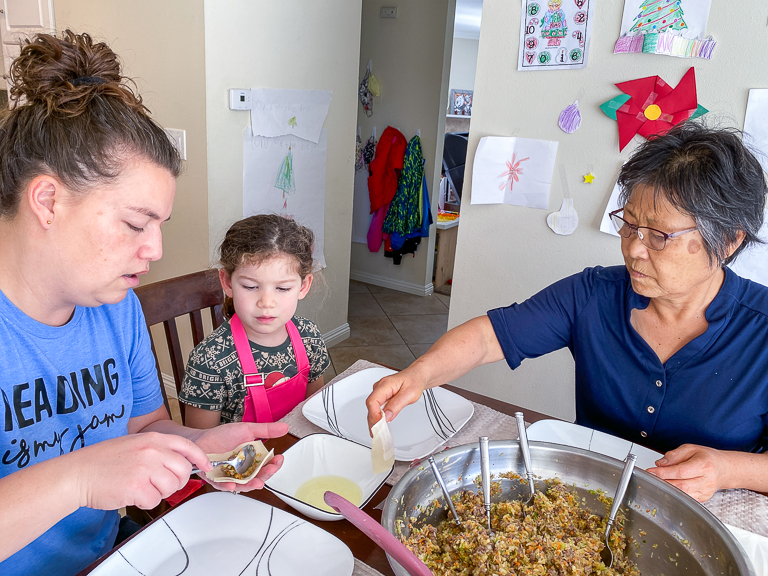 She's watching very intently on how to seal it up. 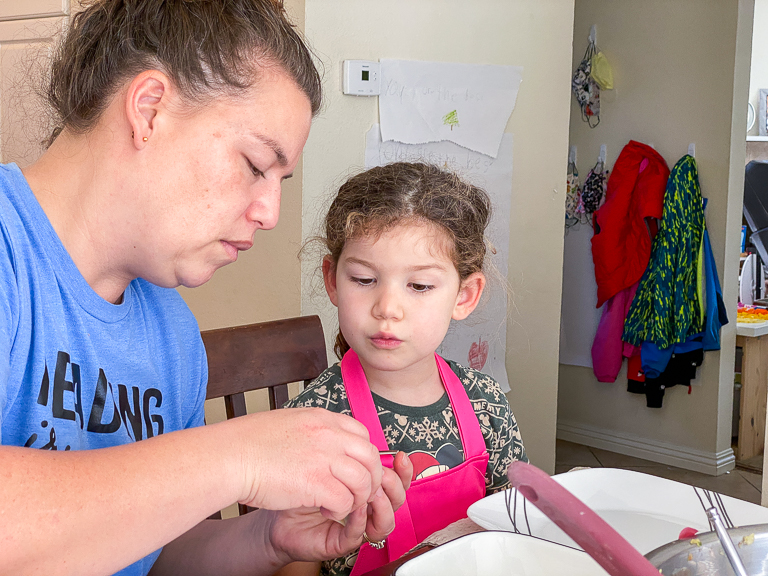 Learning some tips from Grammy. There's one side of the wrapper that is a little more powdery. That's the side to put the egg-wash on. 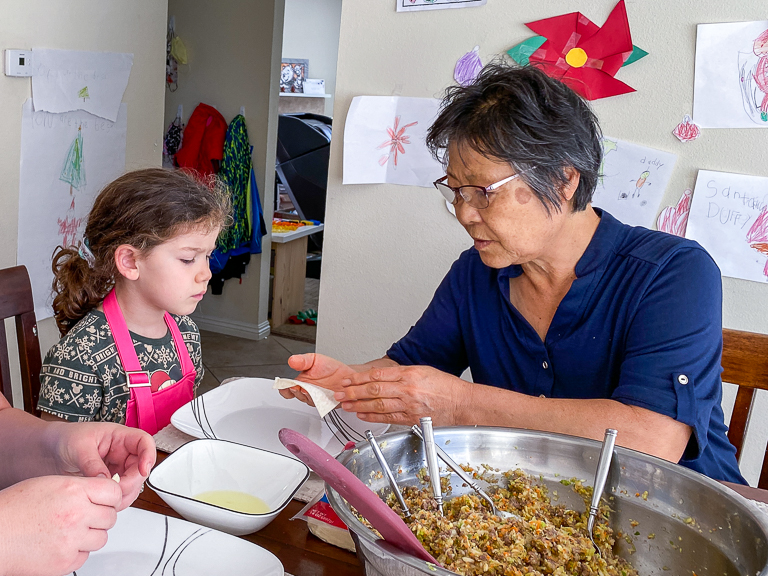 First she dips the wrapper in the egg. 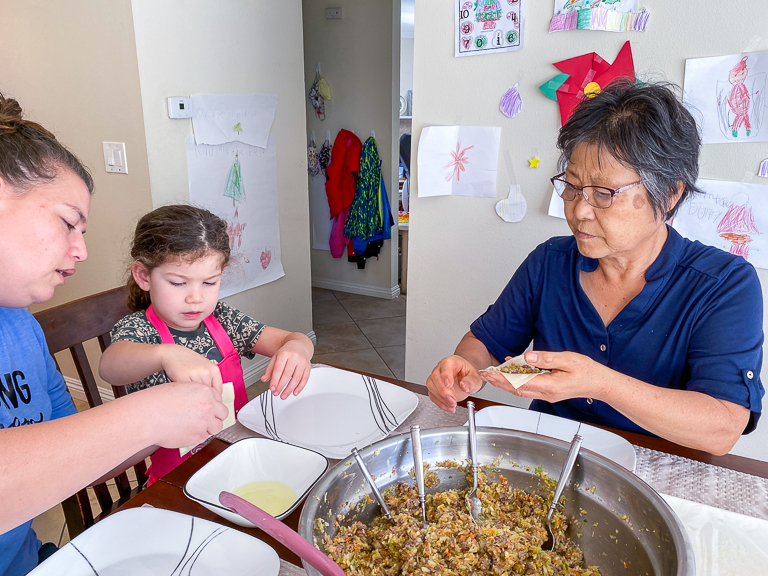 Fills it with our wonton mixture. 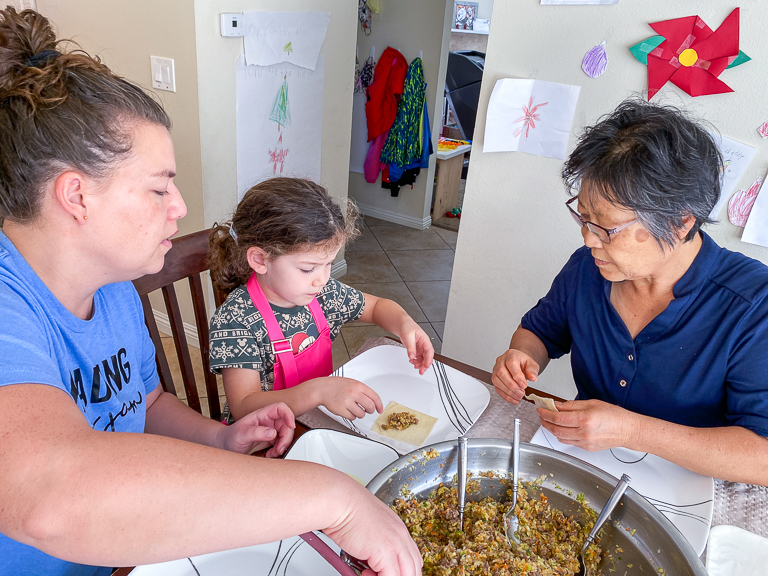 And then starts to pinch things together. Starting at the top, working down the sides, making sure to get the air bubbles out. 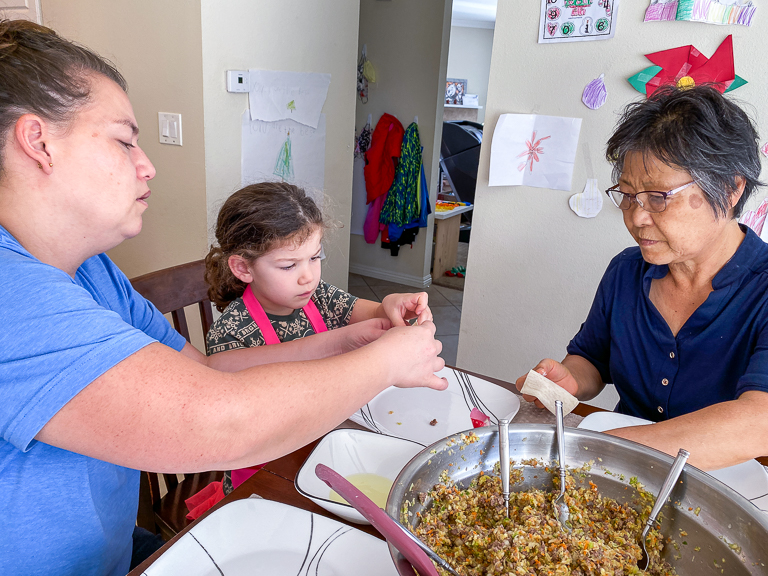 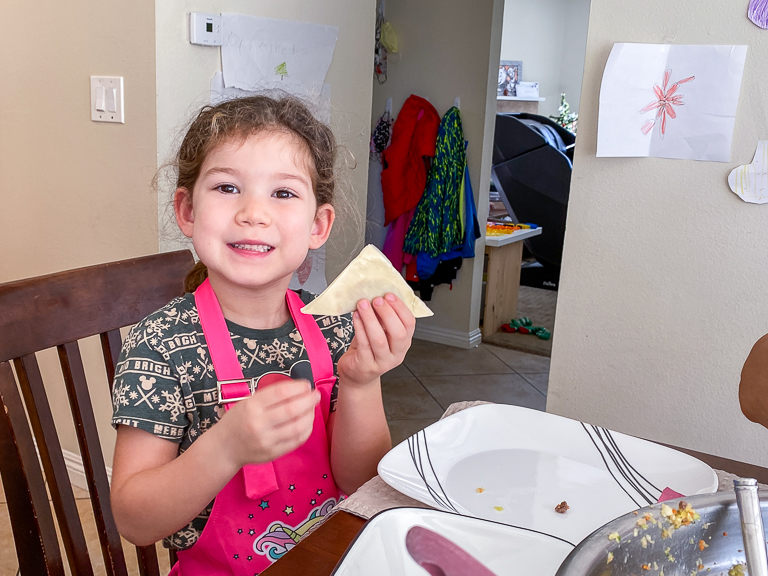 Three generations making wontons. Alli you've got some good teachers. You'll be a pro in no time. 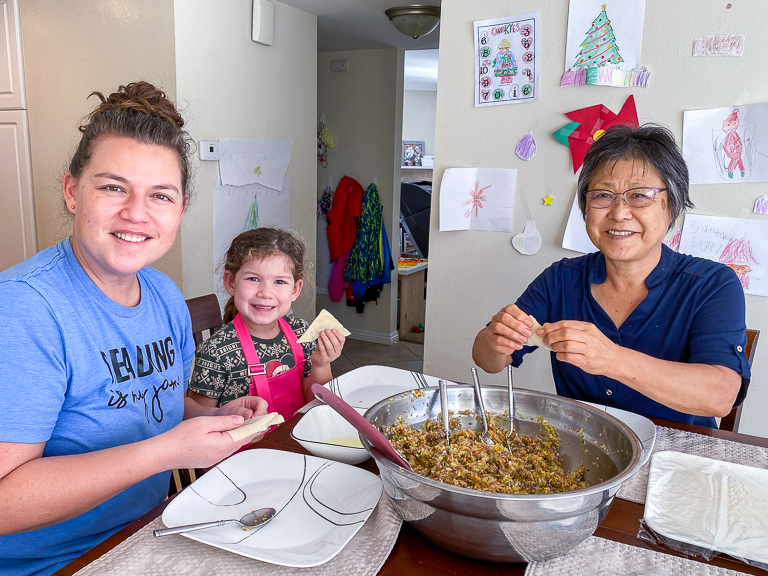 Ian would make his way over eventually too, learning the process and cranking out a few wontons all by himself too. 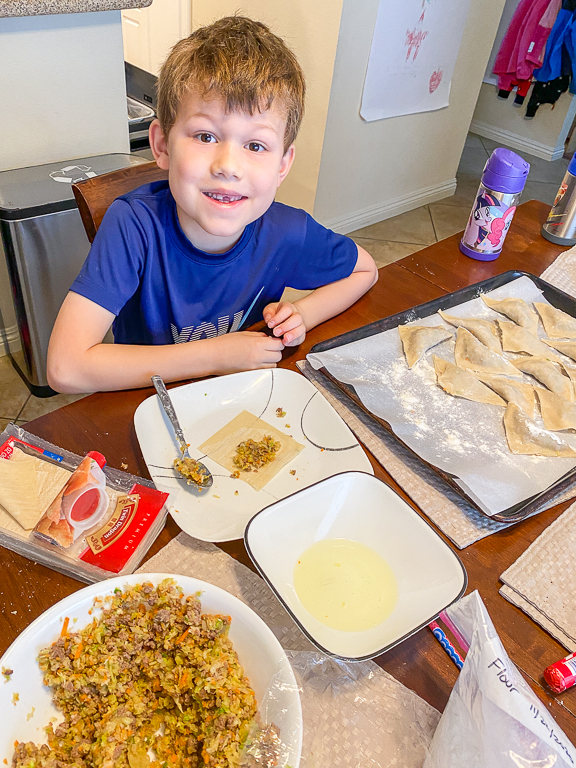 While Alli has been involved in every single process including stovetop cooking up to this point, there's one part that she's not quite ready for. Actually Theresa doesn't like to do it either. Anything that is deep-fried goes to me. That's alright. I can deal with those little pops and burns that come from deep-frying things.
When they were done, we had a whole bunch of perfect wontons! Alli those look fantastic! 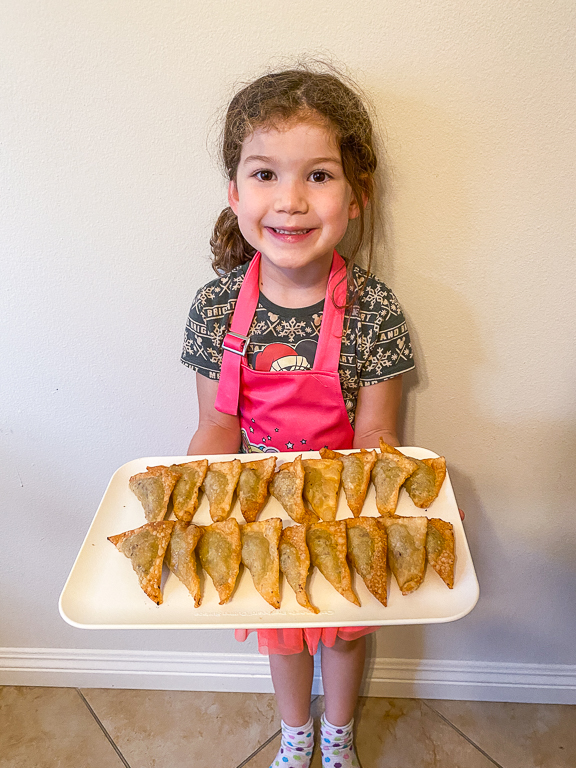 Theresa said "I'm good for dinner! I don't know what anyone else is planning on eating!" 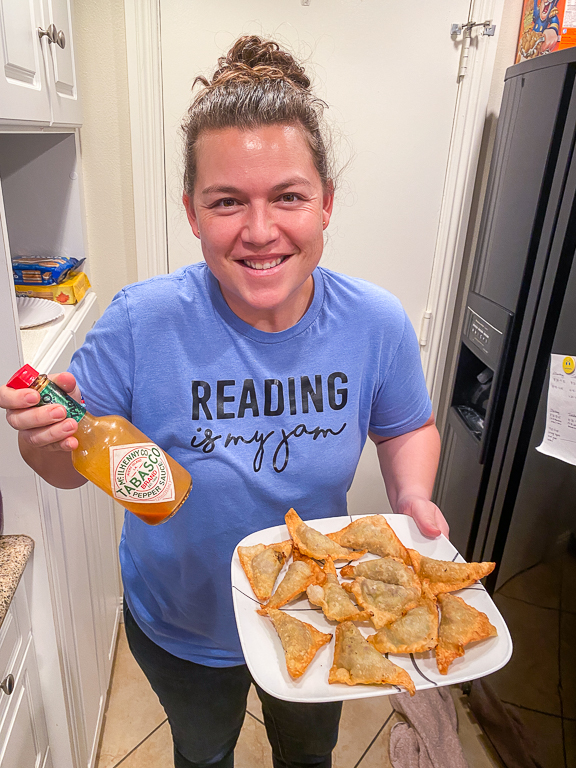 Along with our Wontons, I made a batch of Sweet and Sour Chicken from scratch too. 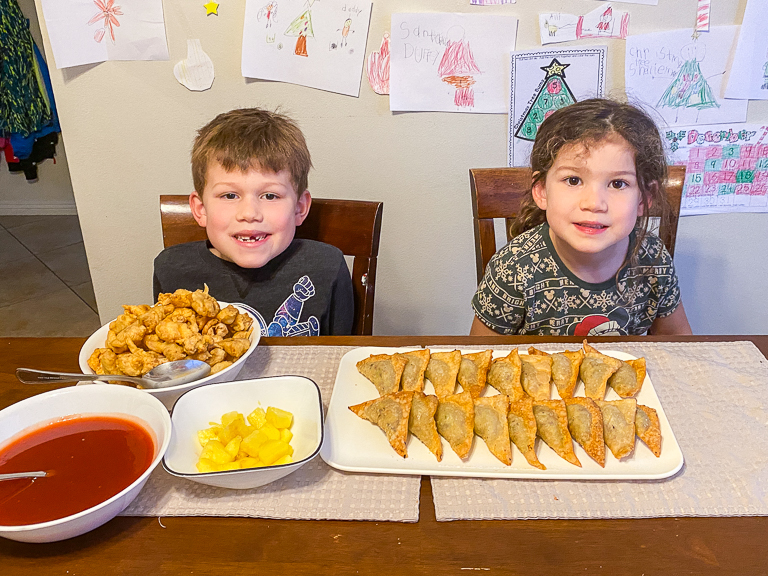 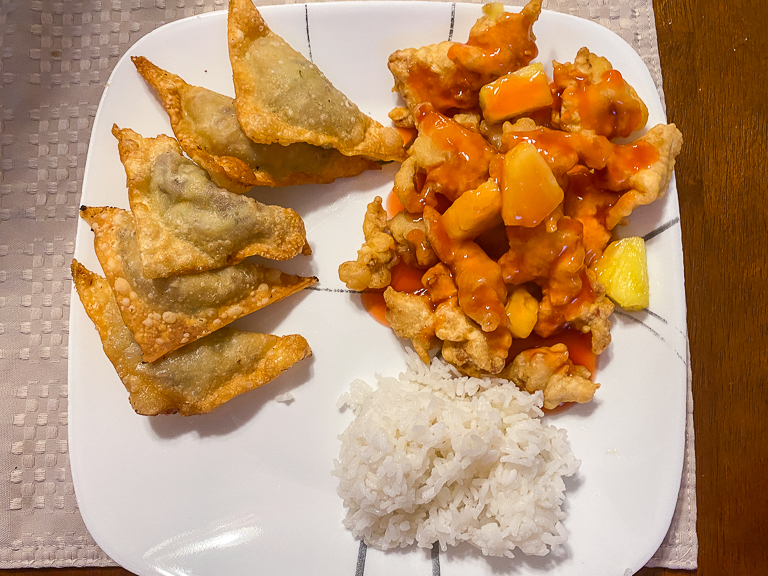 The kids loved the wontons. Along with the rest of his meal, Ian ate 6 wontons, and Alli ate 5! Save some for the rest of us! Big thumbs up for the homemade wontons. Good job Alli! I'm proud of you! 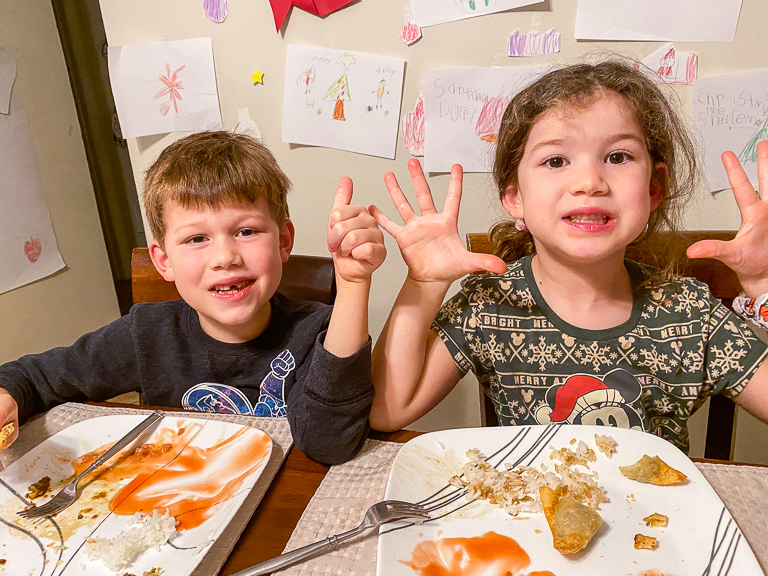