And even though this year I've already made my first Gingerbread House, Salted Caramels, and Surprise Sugar Cookies, I'm not counting any of those for my official yearly treat. I was having a hard time deciding what I should make this year when Theresa suggested that I try making a Yule Log cake. I've seen them at Disneyland, looking pretty fantastic, and decided that would be the perfect challenge to make this year! 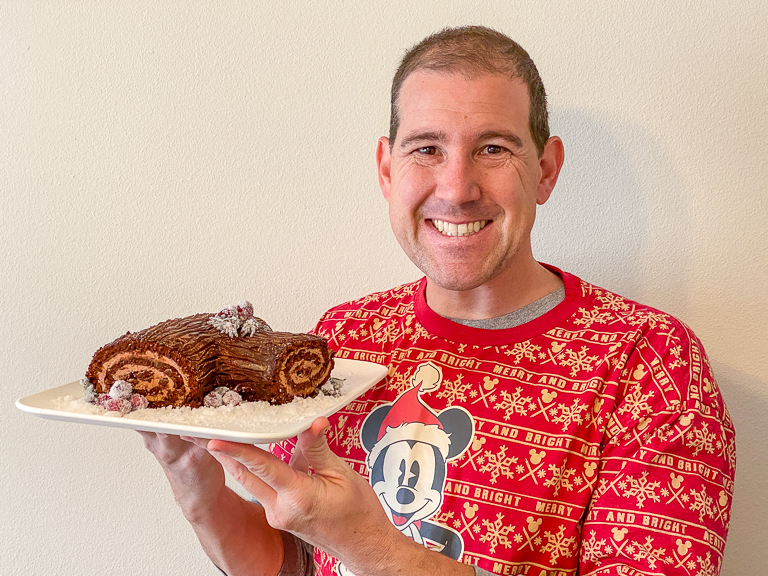 I'll mostly be following the Allrecipes.com recipe for a Chocolate Yule Log. The sponge cake consists of lots of eggs and sugar and only 2 tablespoons of flour. I'm trying to remember if I've ever made a sponge cake before, and I don't think I have. I think the most similar thing I made is the Ice Cream Sandwich cookie over the summer. 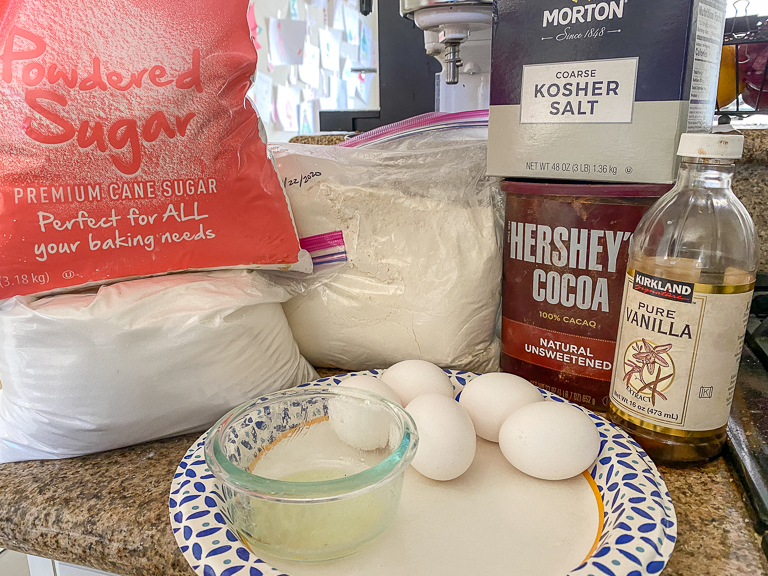 It's going to be a fairly delicate cake, so I made sure to line the pan with parchment and butter it heavily so it doesn't stick. 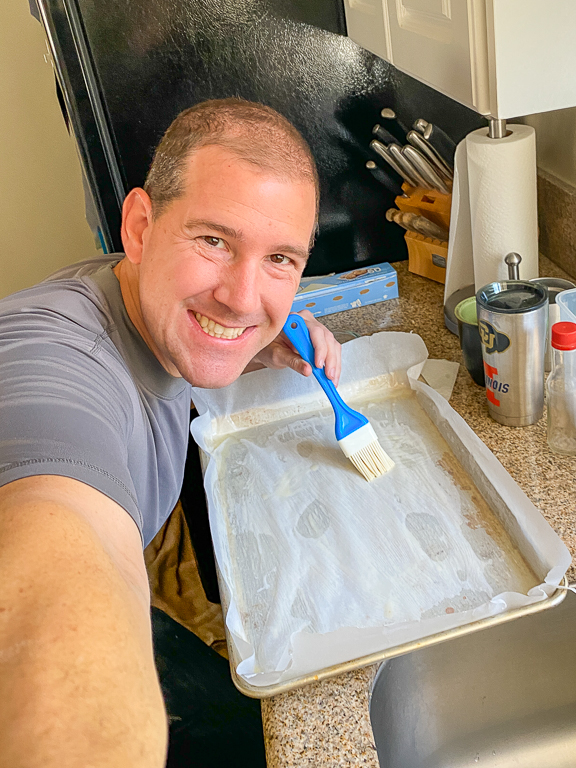 The batter is fairly runny, and also airy from whipping up all the eggs and sugar. I spread it across the entire sheet pan and baked it for 10 minutes at 400F. 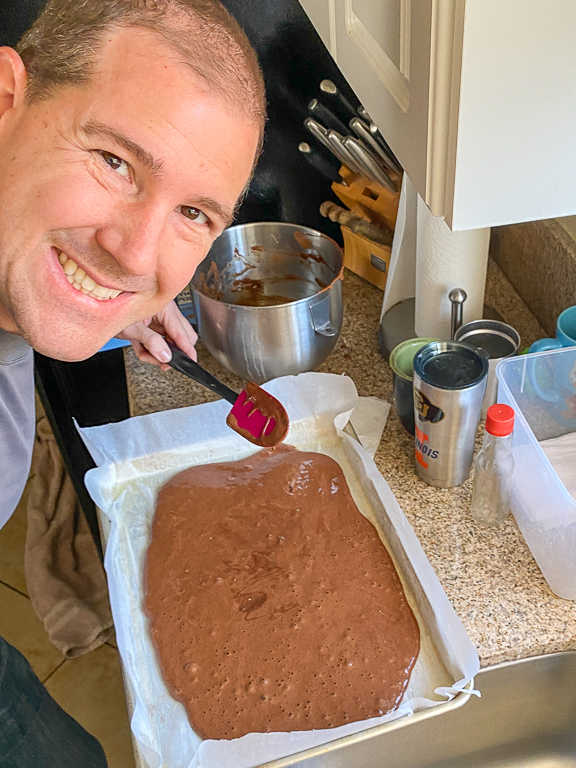 This cake is going to be very sticky when it comes out of the oven, so I've prepped a kitchen towel with a bunch of powdered sugar. 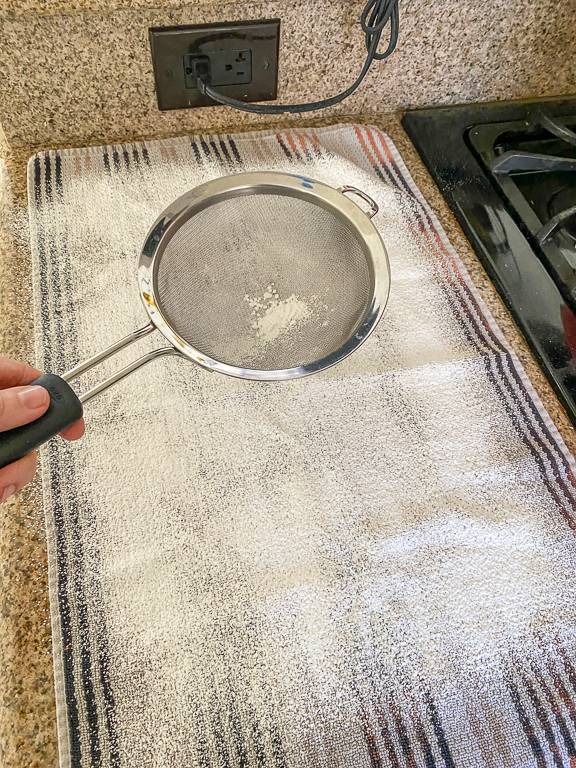 The cake is out of the oven! It's smelling wonderful. I powdered the top of the cake too. Really making sure it's not going to stick. 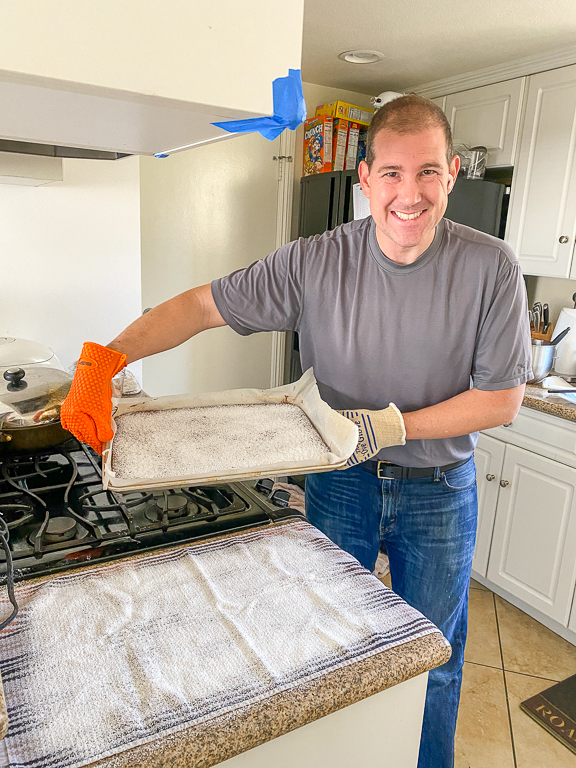 Dumping it onto the counter, there might have been a cloud of powdered sugar that went flying, but at least it didn't stick!
The cake is still very warm and it's important to make sure it gets rolled up now. If you wait until it's cooled, the cake will crack and break, not roll. I rolled it up and set it aside to cool. 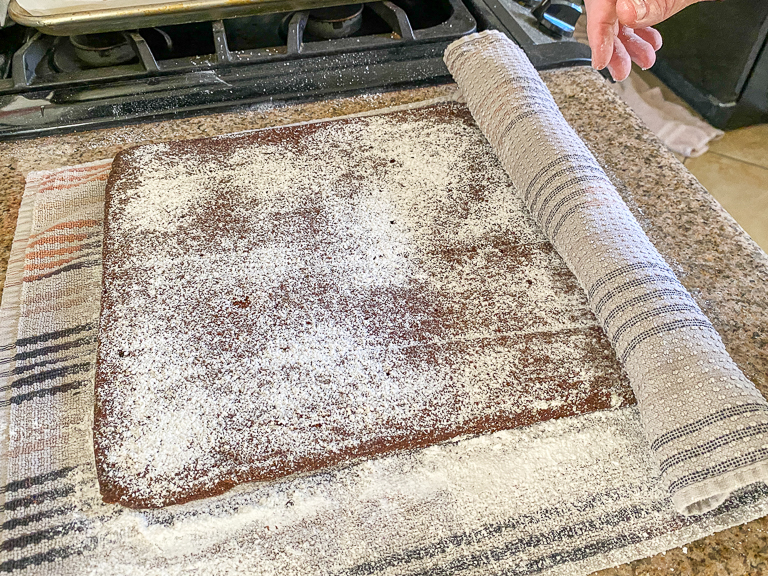 Time to make the filling. It's mostly the recipe from allrecipes.com except I don't have coffee-flavored liqueur so I'm substituting freshly brewed espresso. I don't have mascarpone cheese, so I'm using cream cheese instead. 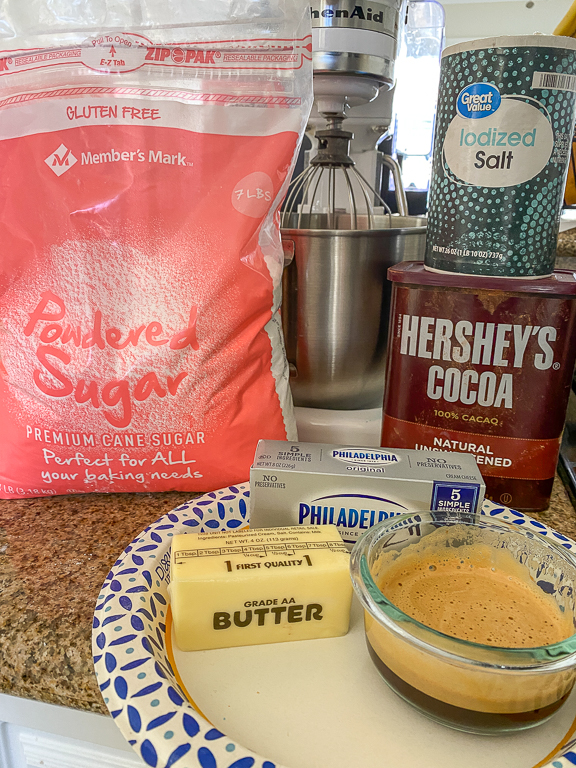 Whip it all together and it's a light and fluffy whipped filling. 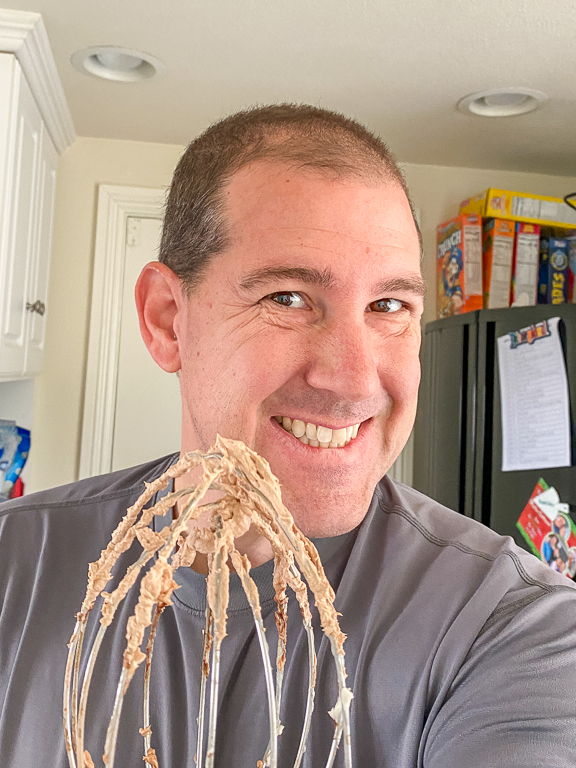 The filling goes into the unrolled cake. 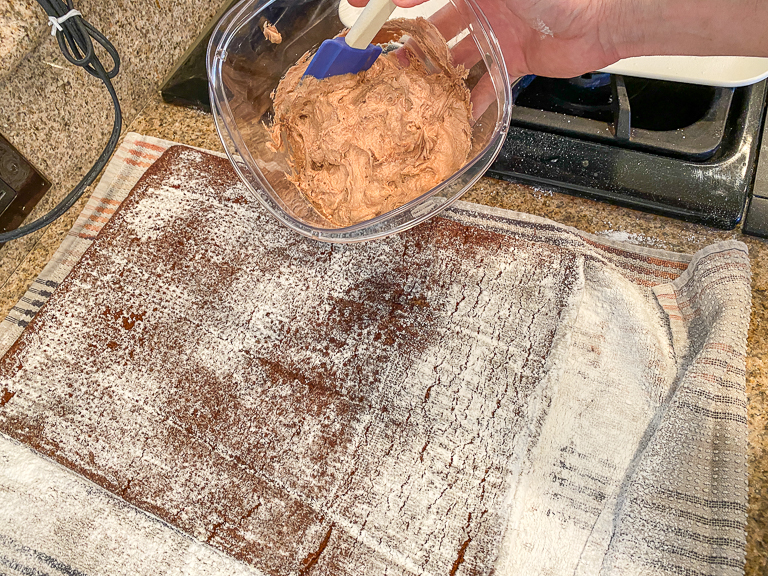 Everything gets rolled back up, wrapped in plastic wrap, and then goes into the fridge to chill. 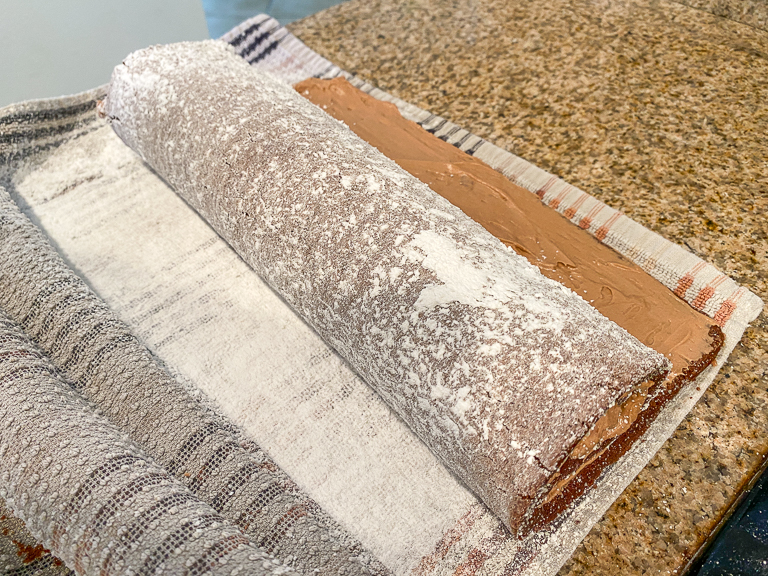 That'll give us time to make the Chocolate Ganache Frosting. It's super simple, just heavy cream and chocolate chips. 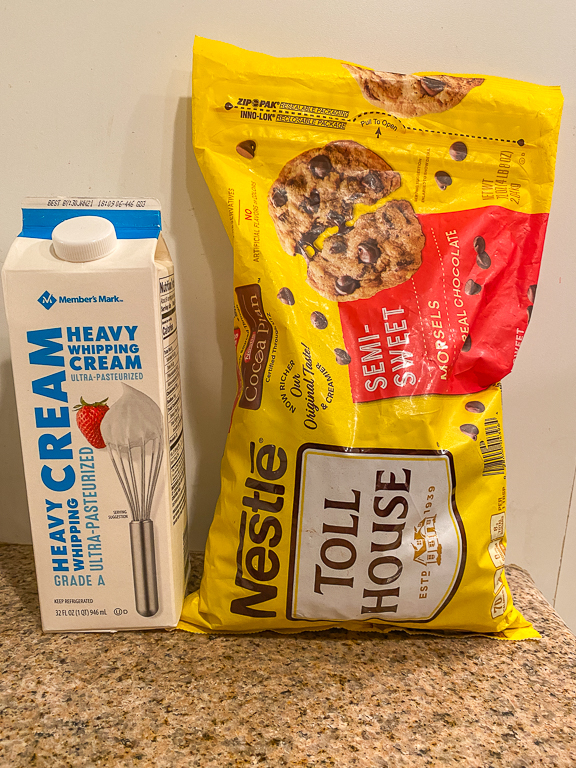 After boiling the cream in the microwave, the chocolate chips go in and it gets stirred together. The result was a delicious tasting ganache frosting. 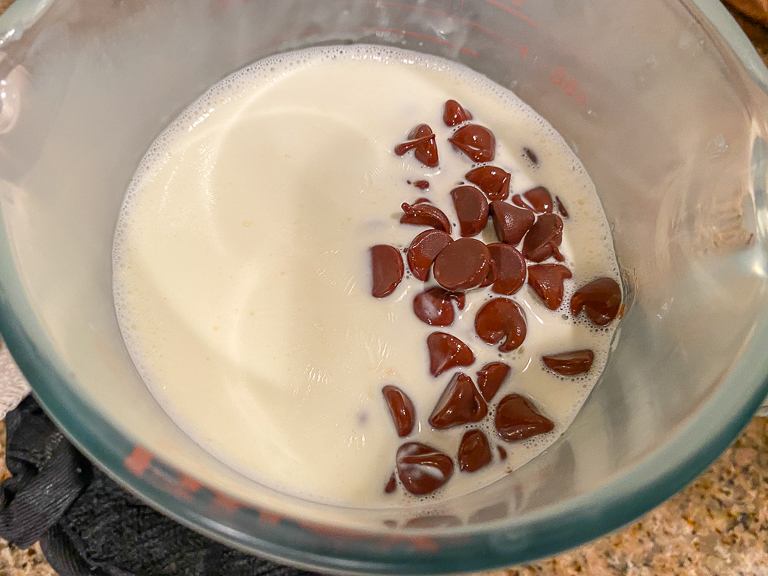 Once my cake roll had cooled, I cut a slice at an angle to make a branch, and then stuck it to the main log with the coffee flavored filling. 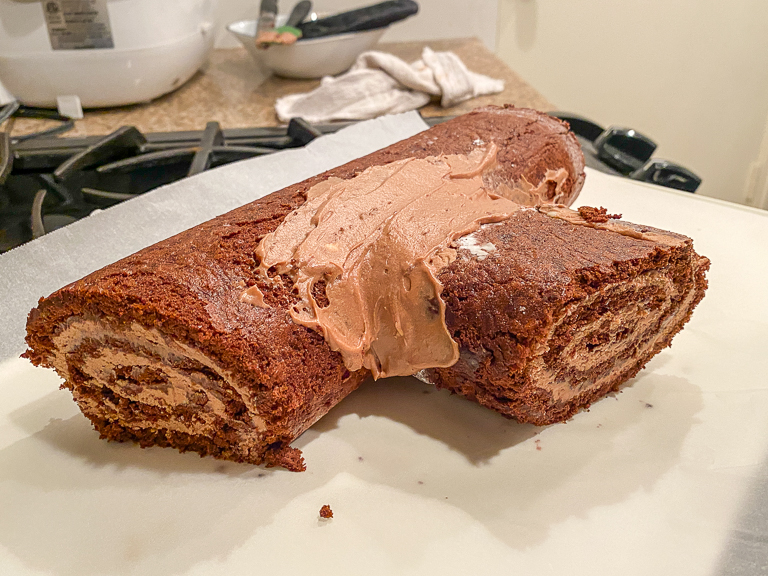 I started spreading the ganache frosting on the top, but decided it was a little too warm. I gave everything a little bit more time in the fridge to cool. 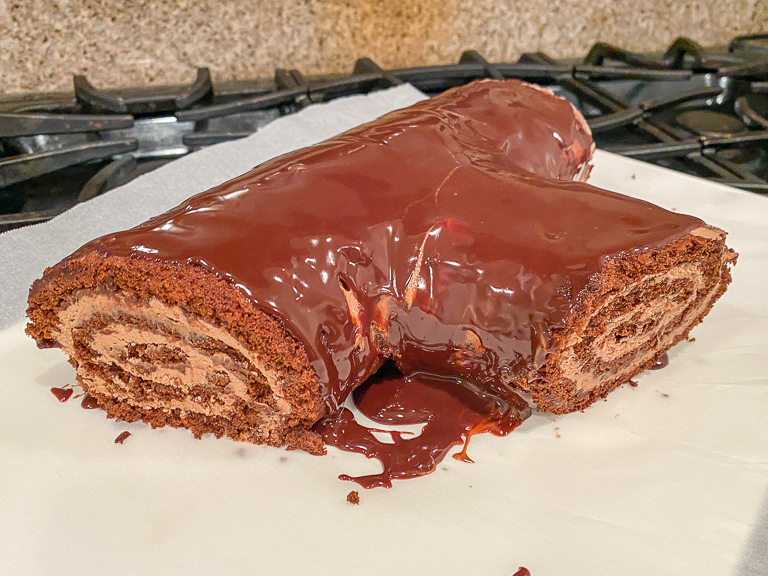 Once things cooled down more, I spread a nice layer over everything. 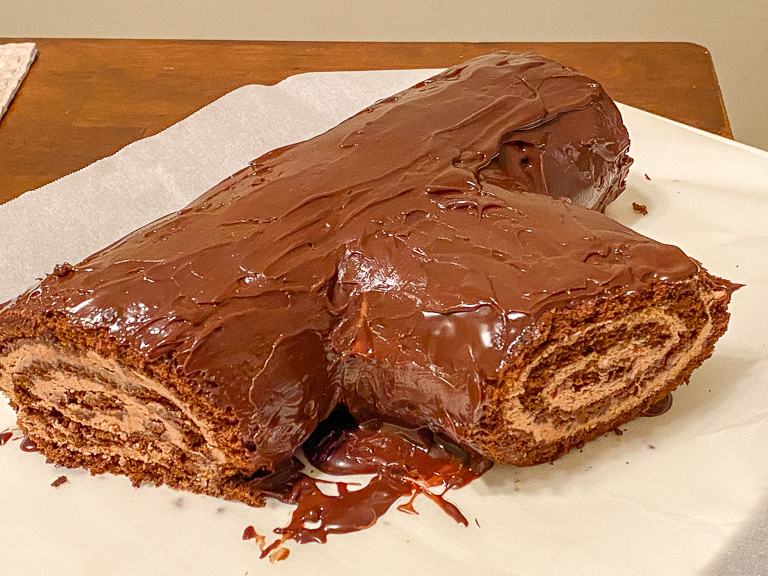 Then used a knife to add bark lines. 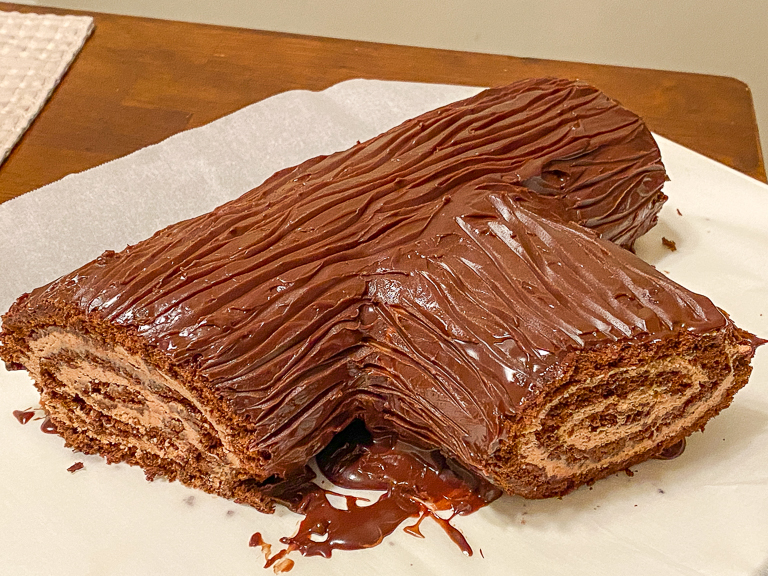 It's pretty as it, but there needs to be a little more decoration on it. For that, I'll be using some fresh cranberries and fresh rosemary. The rosemary comes courtesy of my neighbor's garden, so I was able to pick some nice long sprigs of it. 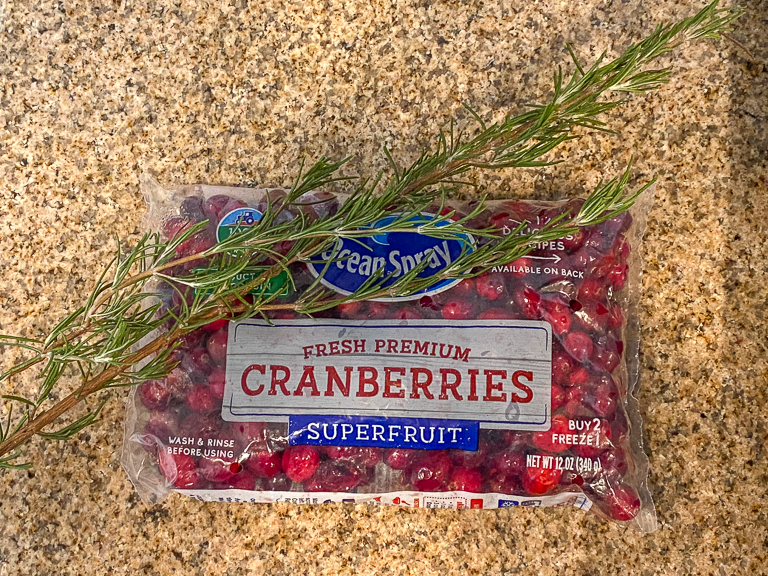 I used a simple recipe from SallysBakingAddiction.com for Sugared Cranberries & Rosemary. You make a simple syrup by boiling sugar and water. 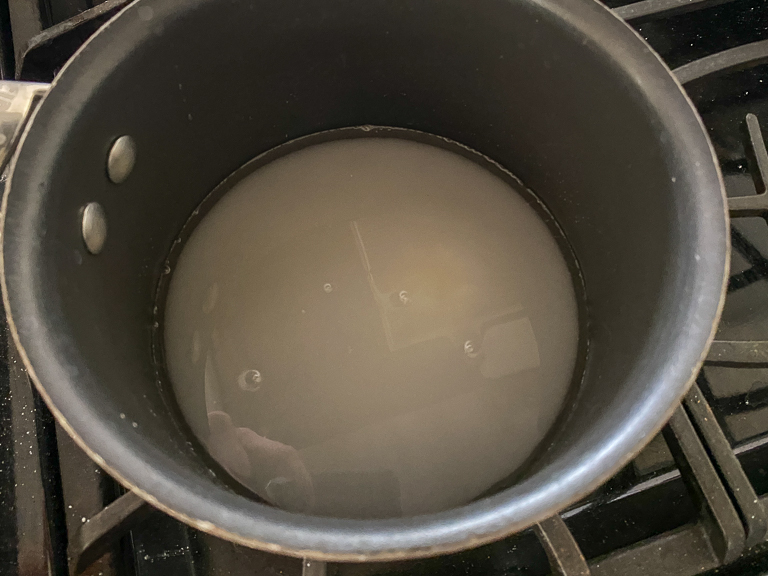 Then pour the syrup over the berries and rosemary. 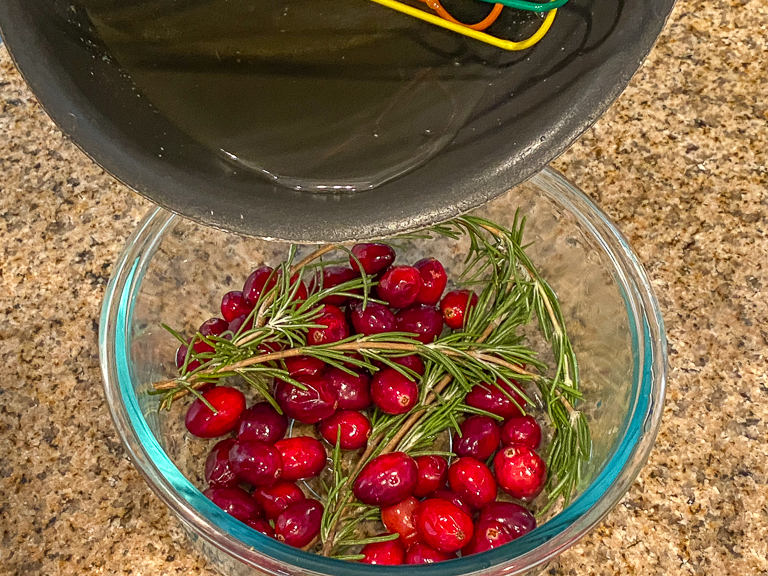 After they dry, you've got some sticky berries. Toss those in granulated sugar and you have some frost covered decorations! 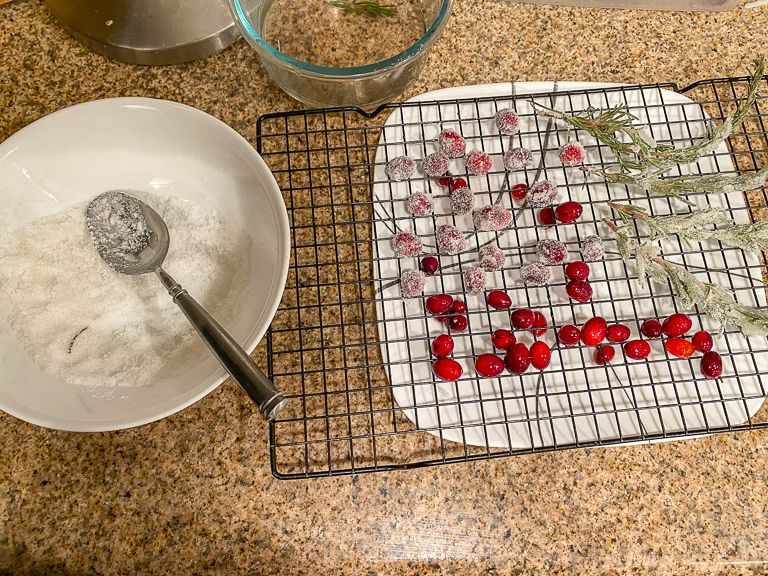 It looks beautiful! Much better than I could have hoped! 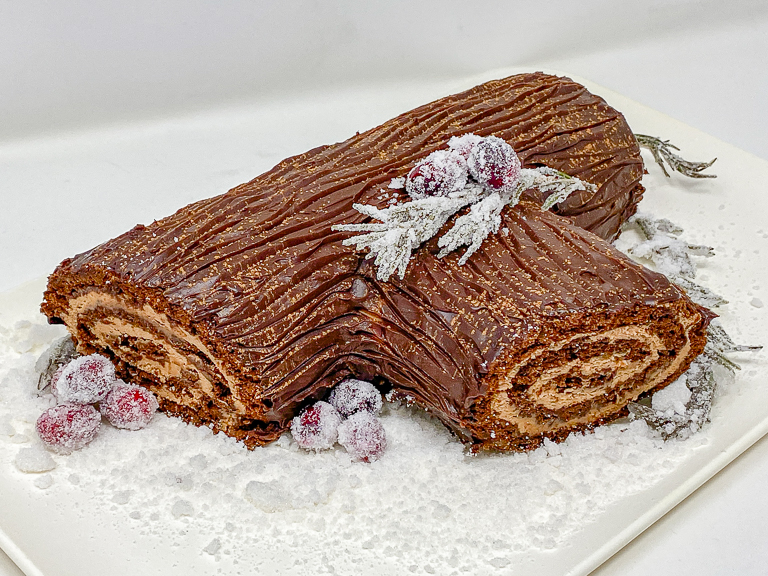 Theresa thought just the chocolate ganache frosting by itself was pretty delicious. I agree. That's a great way to make chocolate frosting in the future. 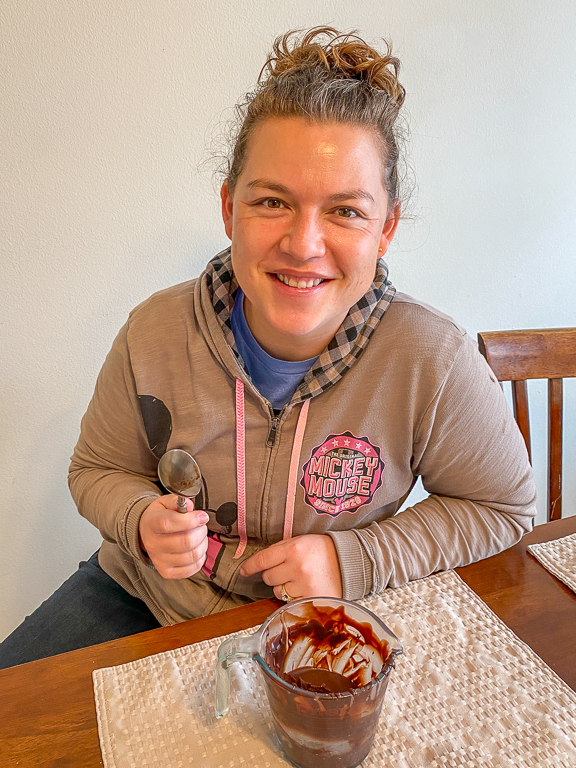 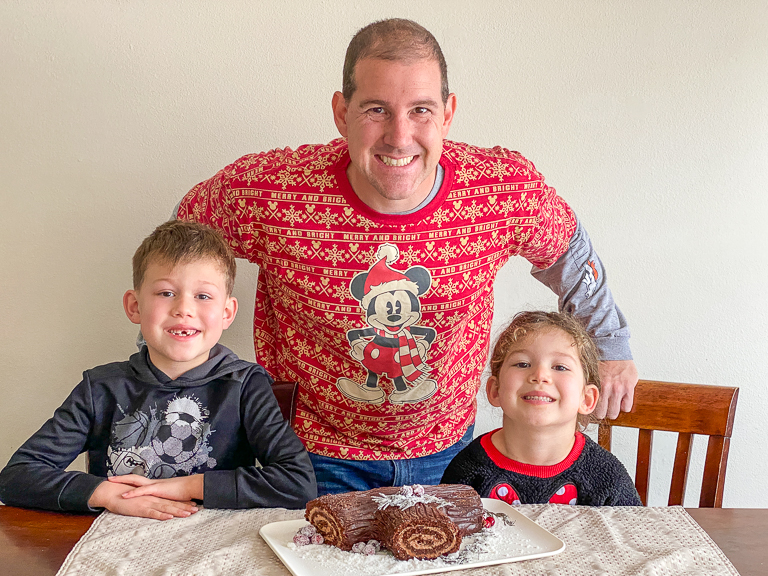 Cutting everyone a slice. 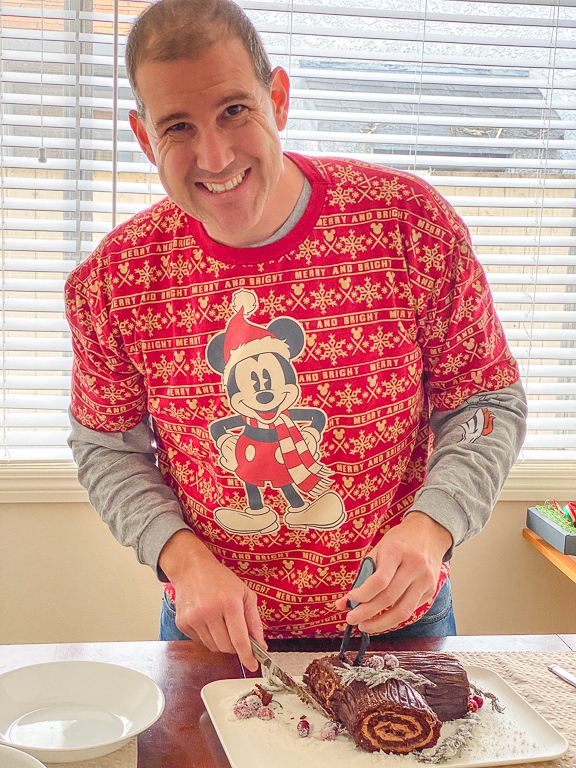 We tried it, and I thought it was pretty tasty! I can definitely taste the coffee flavored filling. 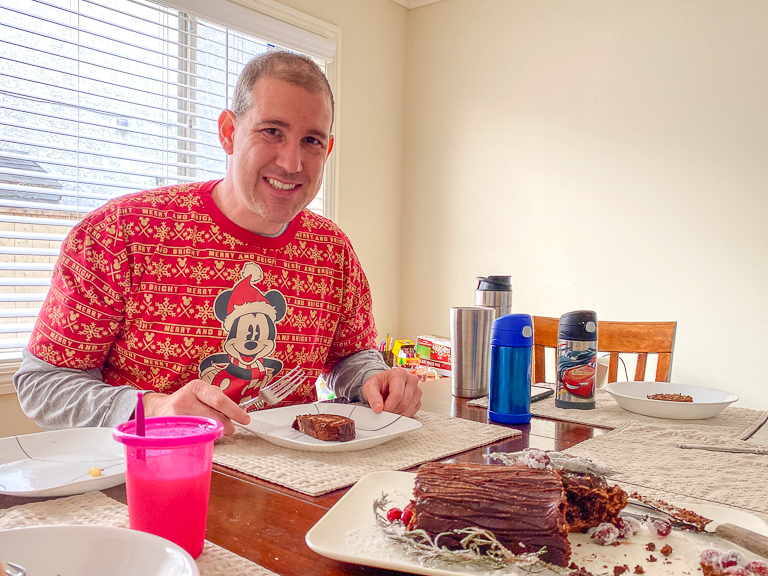 Richard likes coffee, so he enjoyed it. 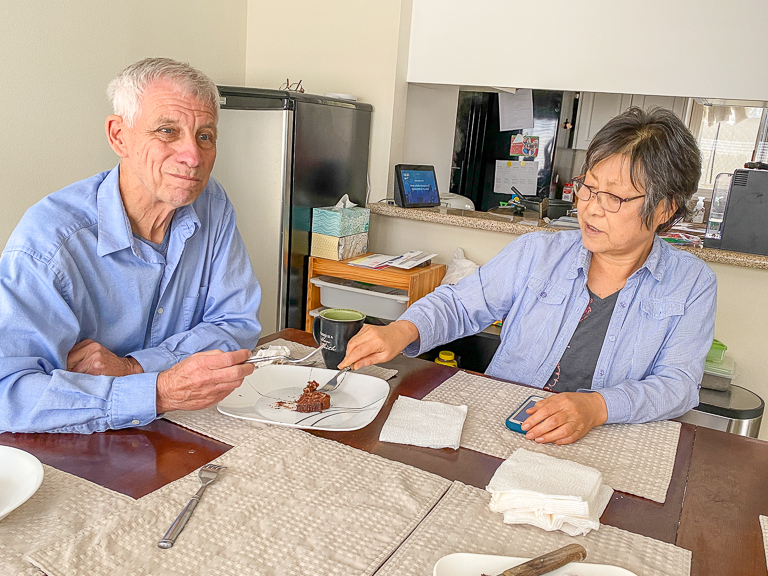 And now for the real critics. Thumbs up from the kids! Guess it's pretty good then! This was a fun thing to make for my yearly Christmas Treat! Time to start thinking about what I can do next year! 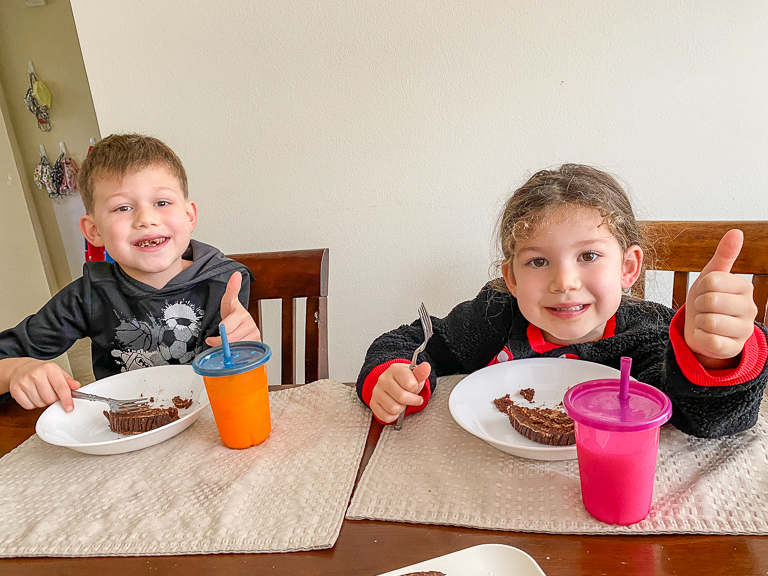