We're previous tried the Cookie Pop Oreo Popcorn and the Candy Pop Twix Popcorn. We liked both of those so we're happy to have a new flavor to try.

And if you didn't notice, Ian is dressed like the Blue M&M and Alli wanted to dress like the Green M&M. 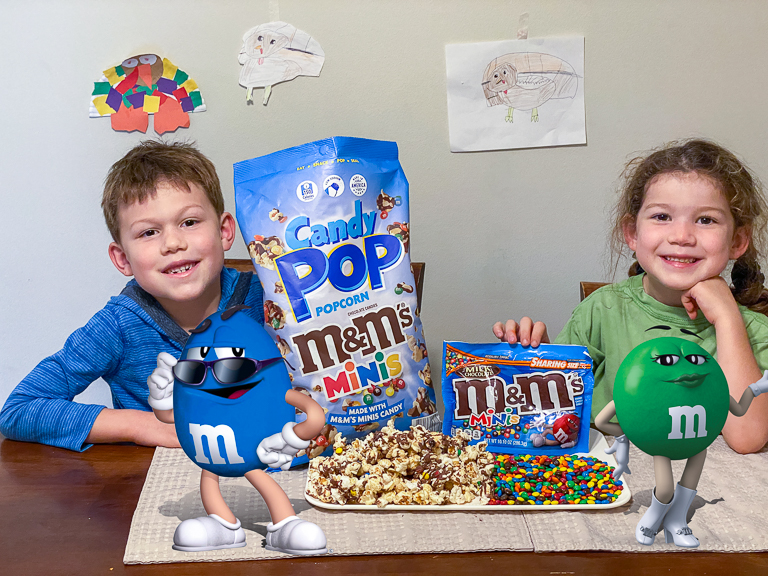 For our taste test, we're going to be having the Candy Pop M&M's Minis Popcorn along with the M&M's Minis just by themselves. Which flavor will win out? 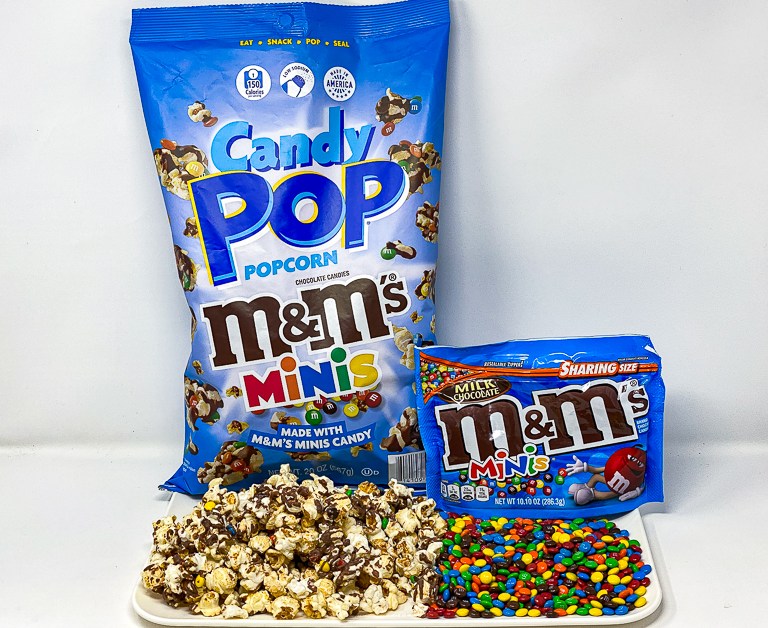 "At last America. Two of our favorite treats are joined together in AMAZING DELICIOUSNESS. Light fluffy popcorn, candy drizzle with M&M's MINIS. A perfect MATCH!"
So that's interesting that they call it a candy drizzle. I guess there's not enough cocoa in there to call it a chocolate drizzle. The picture shows a ton of M&Ms compared to the popcorn. We'll see how good they do coating these pieces of popcorn. 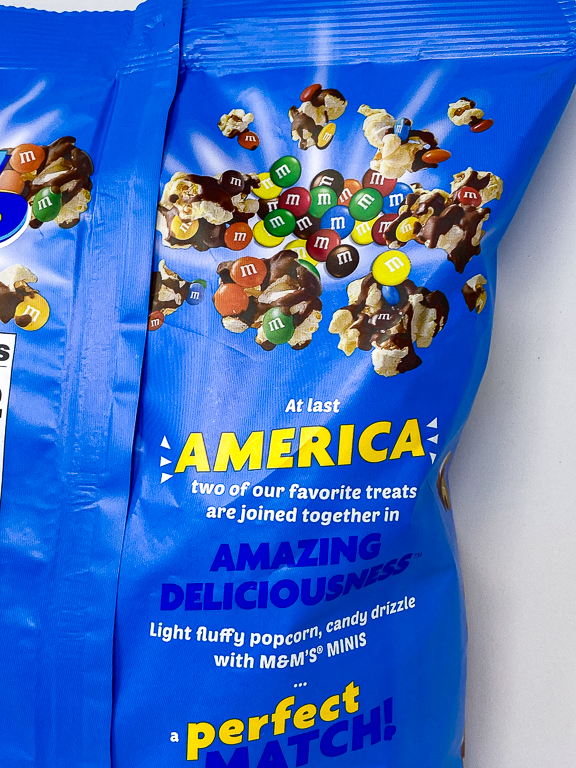 The setup is Alli approved. 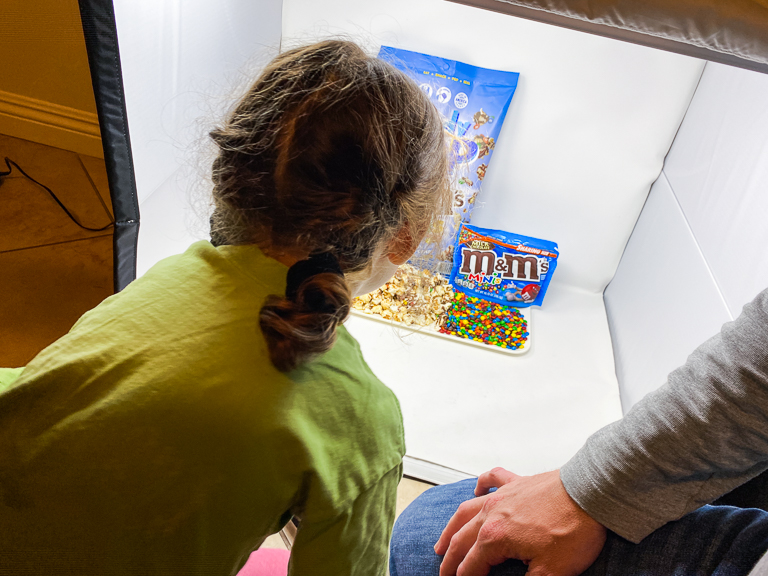 There's a bit of drizzle on the popcorn. 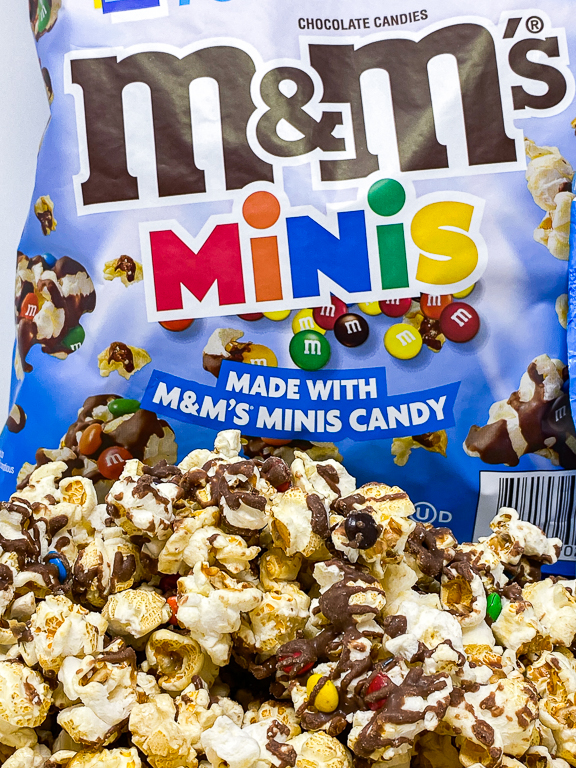 But it must be hard to get the M&Ms to stick to it. They're in there, but I'd say over half the pieces have zero M&Ms. Occasionally you'll find a grouping where there's a whole bunch of popcorn pieces that are stuck together with drizzle and they've formed a pocket where M&Ms can collect. 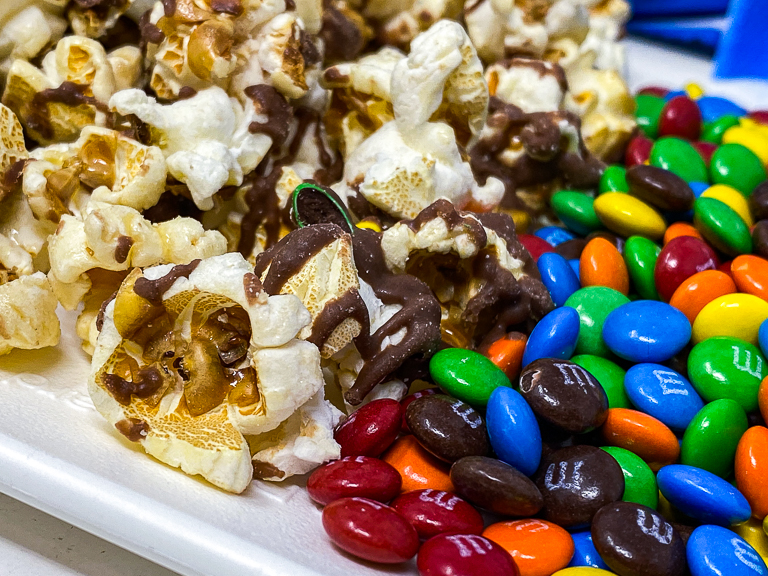 And M&Ms Minis are delicious just by themselves. If your favorite part of an M&M is that crunchy candy shell, then these candies are for you. There's way more candy shell on these versus a regular M&Ms. 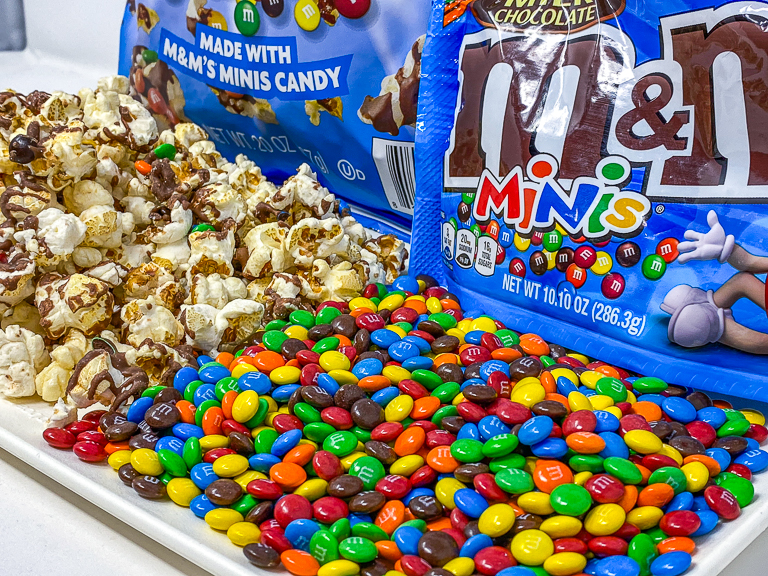 Let's start with the popcorn. 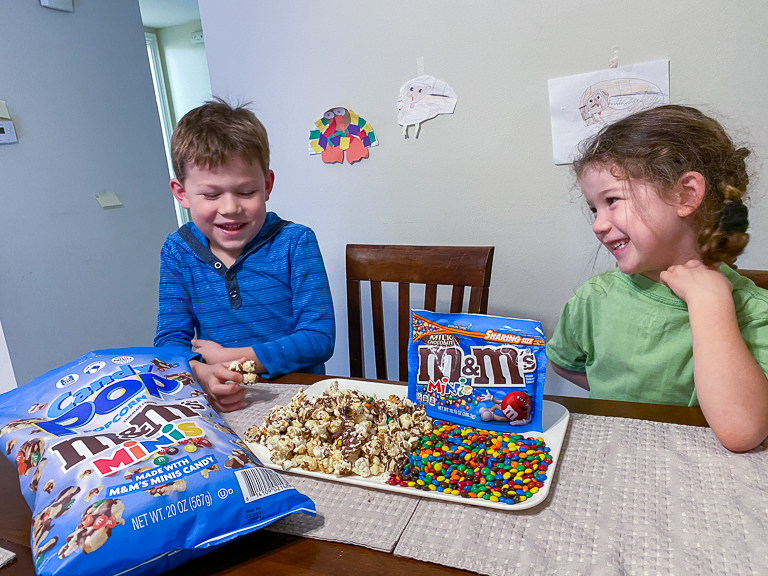 We're all fishing out pieces that have a few M&Ms on them.
It's a tasty popcorn to be sure, but I think my main complaint is that I can't taste the M&Ms! I can taste the drizzle, which does have a chocolately taste, but it's not an M&Ms chocolate taste. 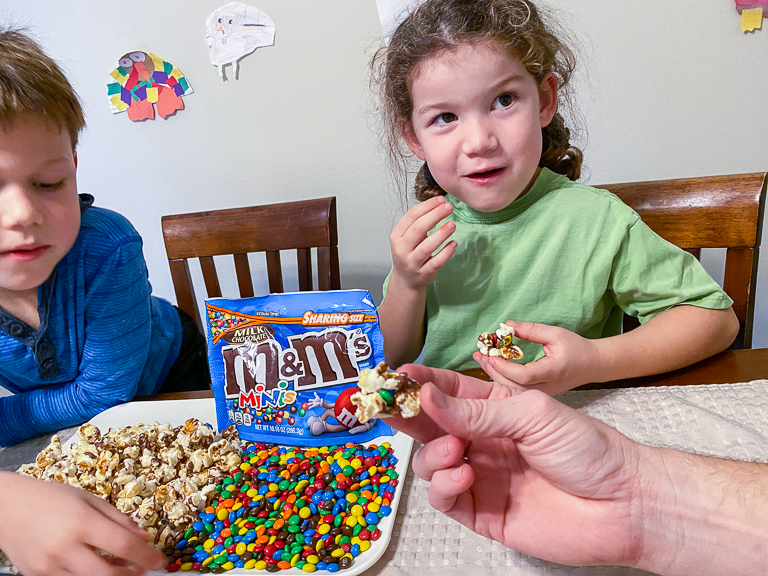 M&Ms chocolate has a particular flavor, so you'll know it when you taste it. 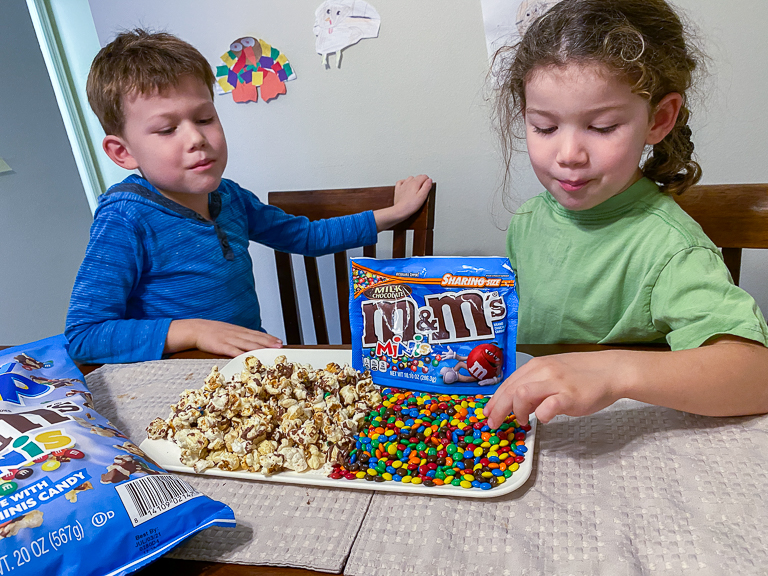 Picking out their blue and green colors from the M&Ms Minis. 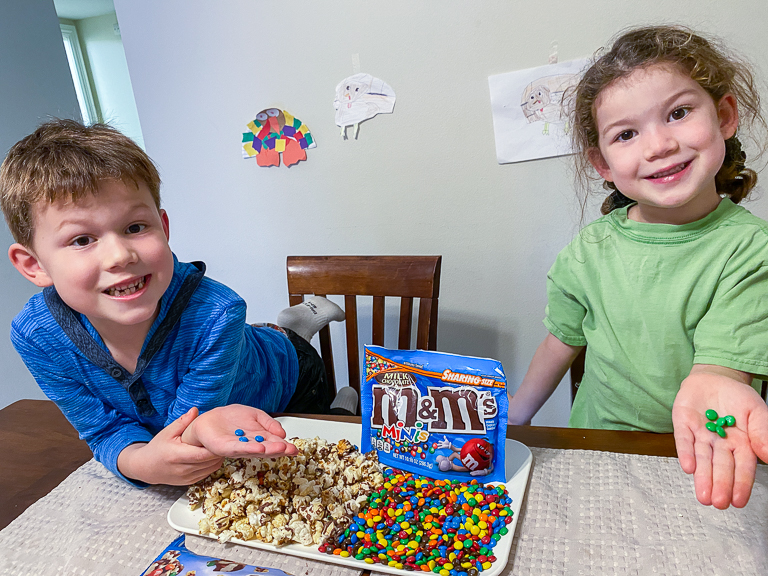 So how do you solve the problem of it not tasting enough like M&Ms? We're adding a whole bunch more M&Ms to the popcorn! That looks like just about the right ratio.
And that also looks like the perfect movie snack. Let's head to the living room! 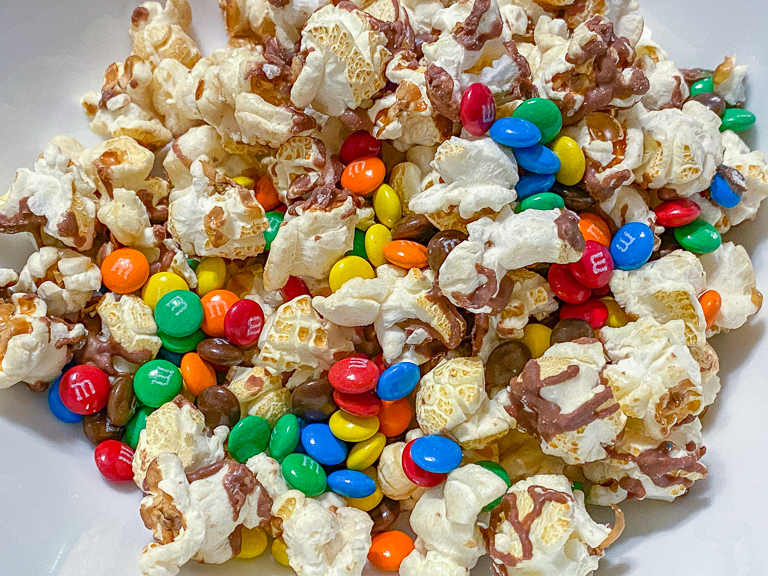 One of the movie/tv series that we've really been enjoying lately is "One Strange Rock". It's a science/space documentary about our Earth and our Solar System. Eight real Astronauts who collectively have spent more than 1000 days in space go through their experiences and what they've seen and felt while in space. The main narrator is Will Smith and he does a fantastic job. It was a really great find on the Disney+ channel.
The show goes into topics like, how our Earth and Moon formed, how life formed, reproduction, death, our environment, and how everything is all connected. It has facilitated lots of good questions from the kids.
I remember one particular episode when Ian asks loudly "What is sex?"
Ha! Well, like I said, this show does make them ask questions... 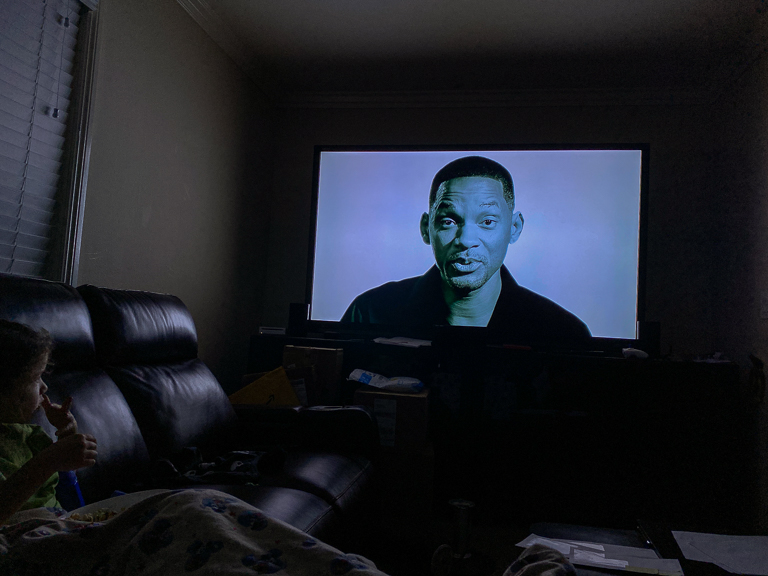 We also learned about the formation of lands and islands. How parrotfish eat corral and then "excrete" it out the other end. In one year, amazingly, a single parrotfish can produce an entire ton of sand! That's just 1 parrotfish. They've been doing it for so long that on some islands, scientists have found that the sand there is 70% parrotfish poo! So Ian, those castles we make down at the beach... What do you think they are made of?
Ian - Fish poop!
We do learn some interesting things don't we. 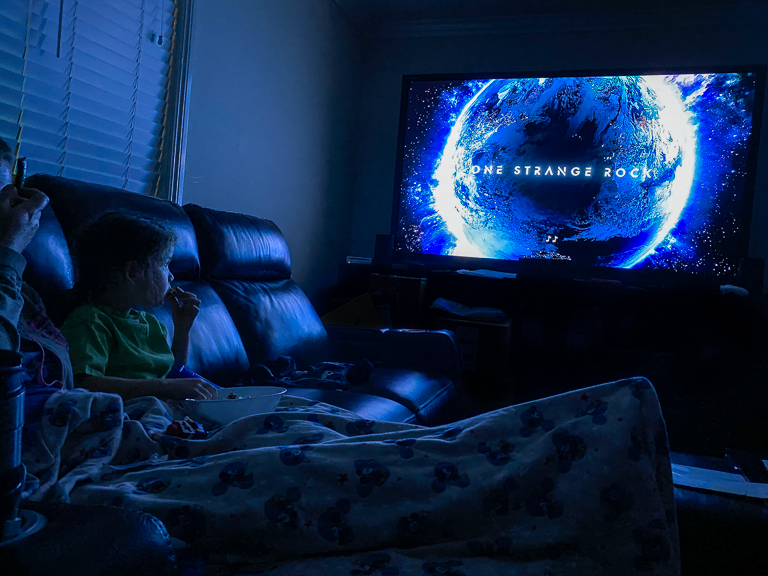