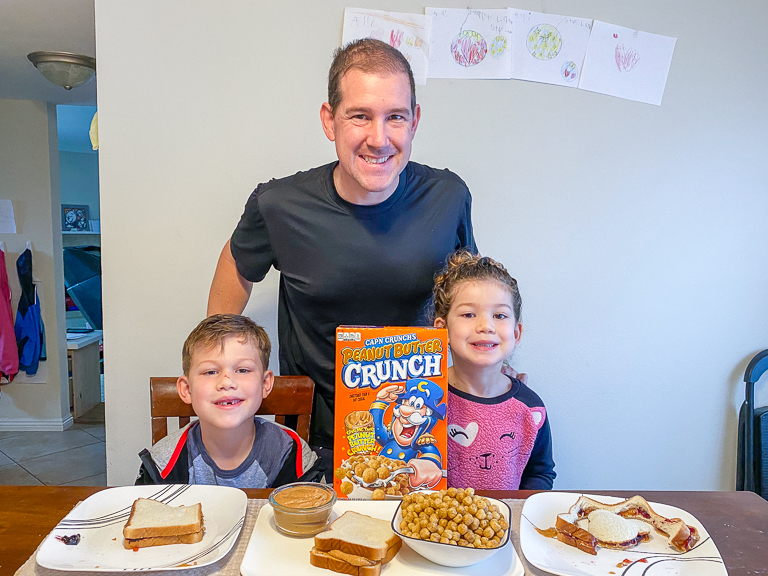 And to go with it, we're making our own Peanut Butter Sandwiches, but more on that after the jump. 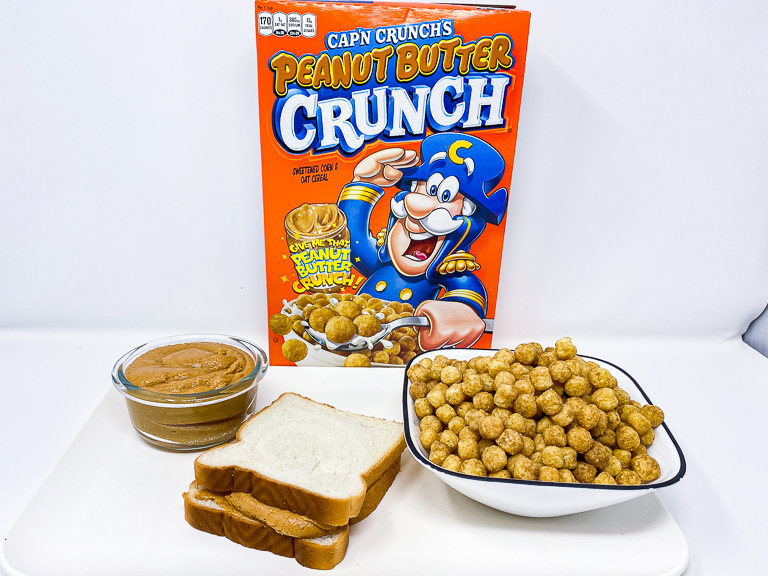 Cap'n Crunch's Peanut Butter Crunch was released back in 1969, and Smedley the elephant was the mascot. It's nice to see that peanut loving elephant still on the back of the box all these years later. 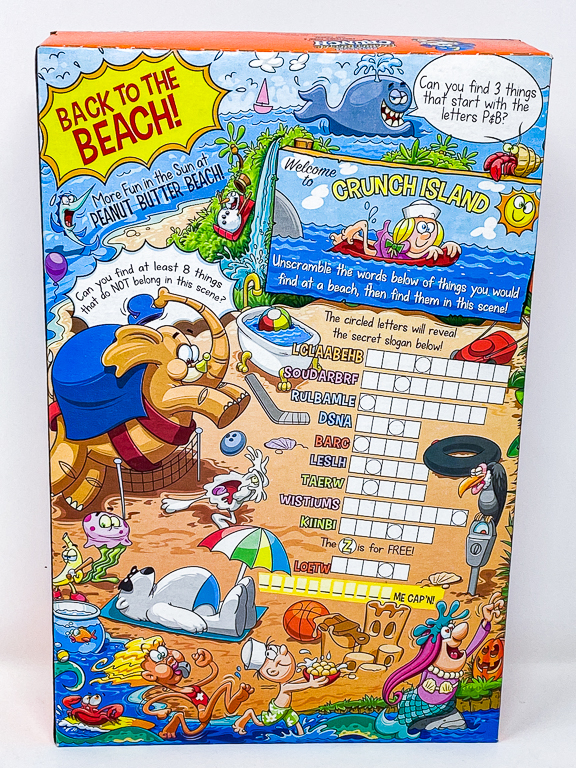 The Peanut Butter cereal takes the form of a puff-ball instead of the regular "stab the roof of your mouth" shape that normal Cap'n Crunch has. 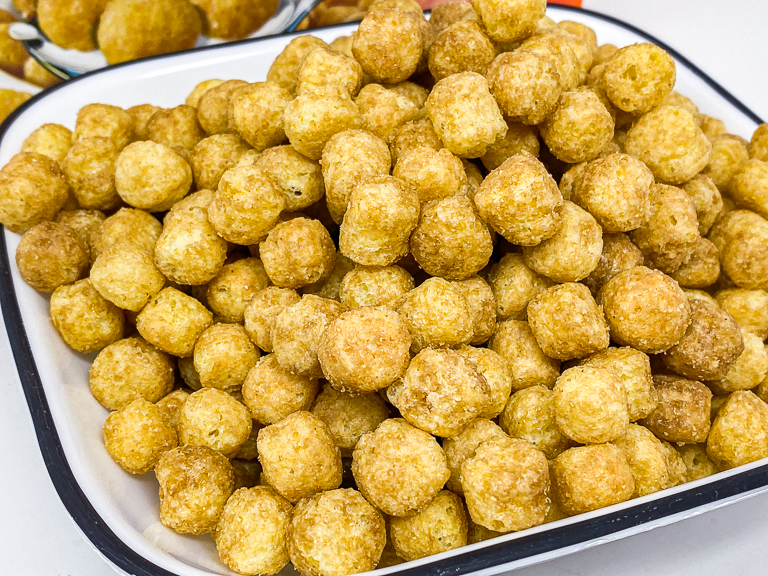 Crunch Berries and Oops! All Berries - Check.
Regular Captain Crunch - ... really? I haven't written a post with these in them? 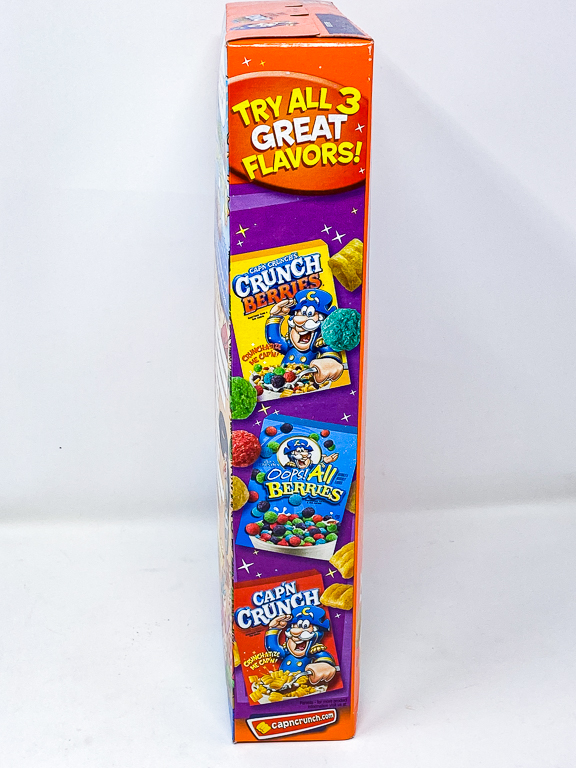 So when I said we were going to make Peanut Butter Sandwiches, were you thinking this? We're making our own peanut butter! It's the first time that any of us have made our own peanut butter! The recipe is super simple. We followed along with pinchofyum.com and their 5 Minute Homemade Peanut Butter guide. You just need peanuts, honey, and salt to taste. 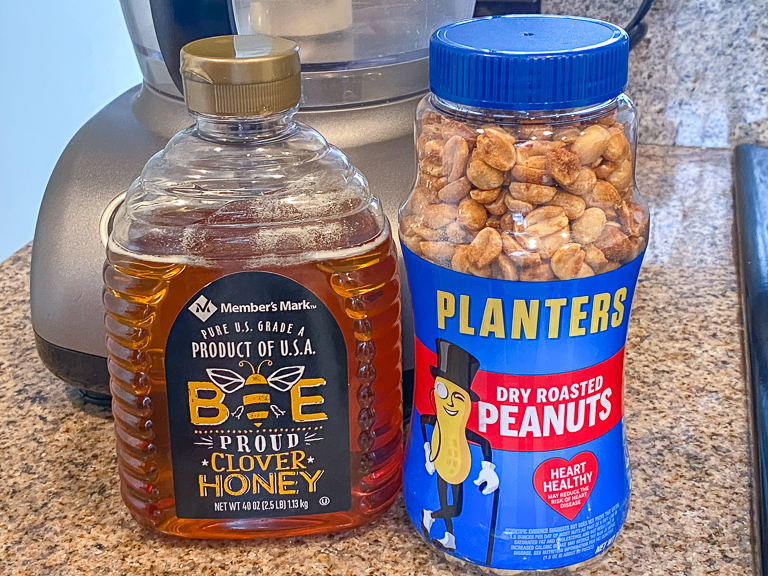 The kids didn't know that homemade peanut butter was possible, so they were excited to come made it. 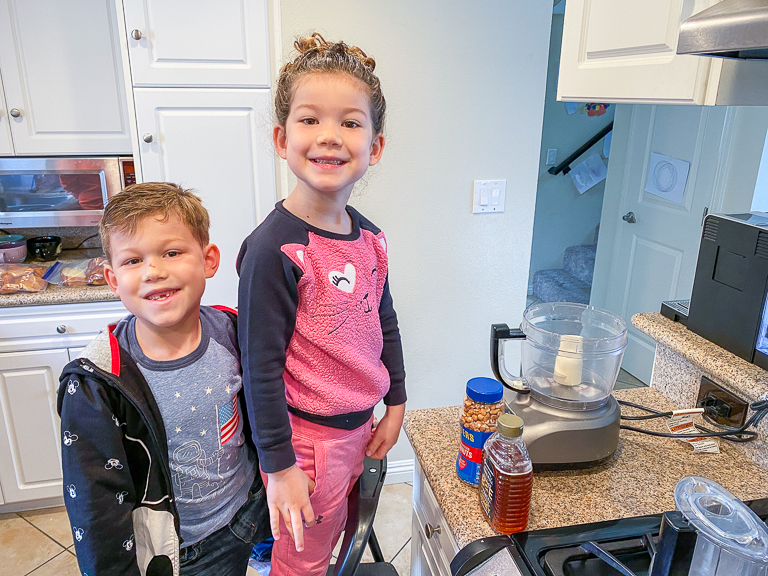 The recipe calls for 2 cups of peanuts. I'm sure they accounted for taking a couple handfuls for sampling along the way. 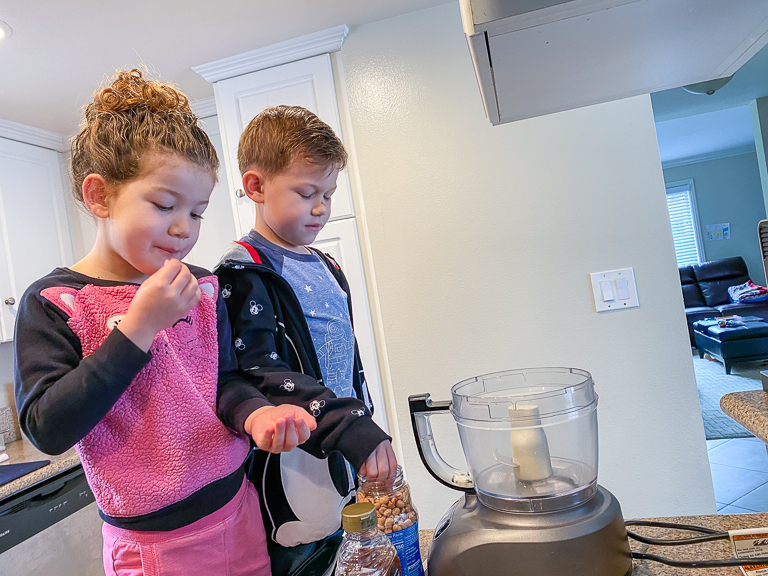 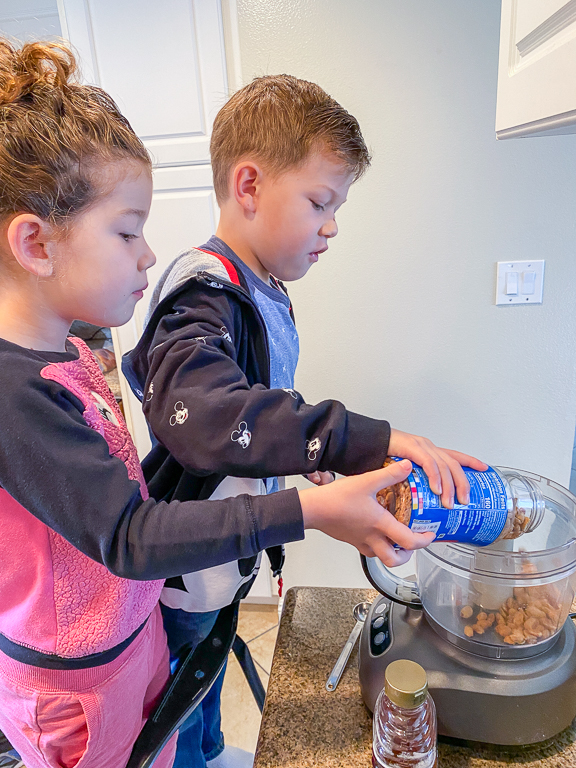 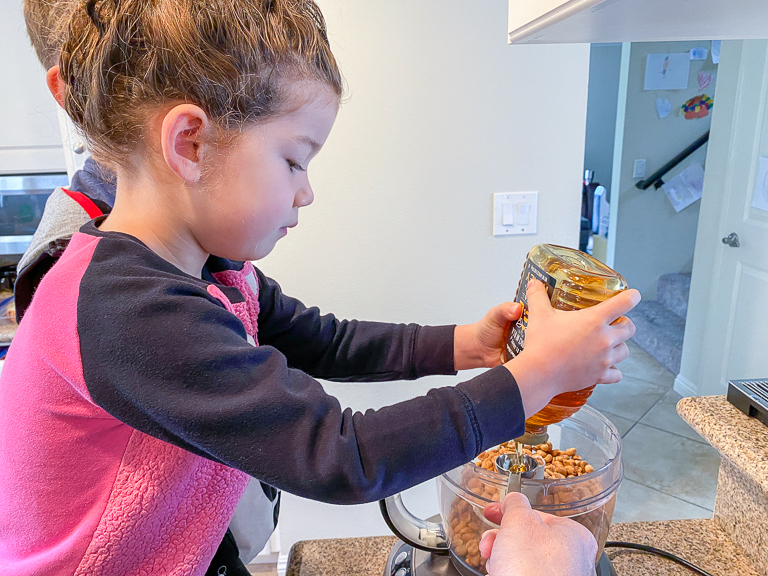 And now it just mixes for 4-5 minutes. I see you licking that honey spoon Alli. 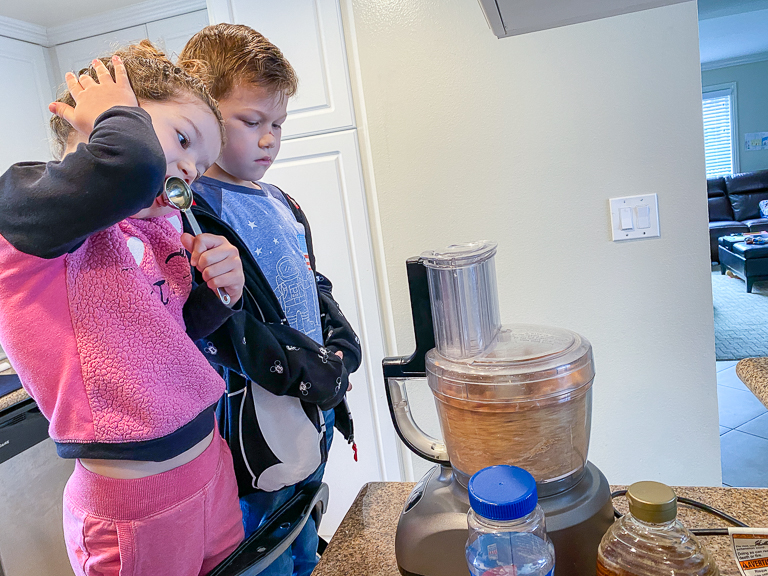 At least she's a good sharer. 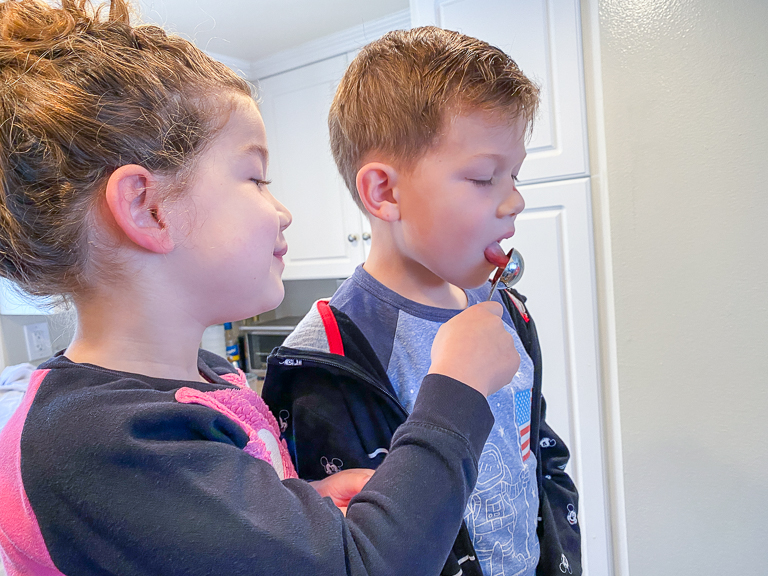 I love that they get along so well. 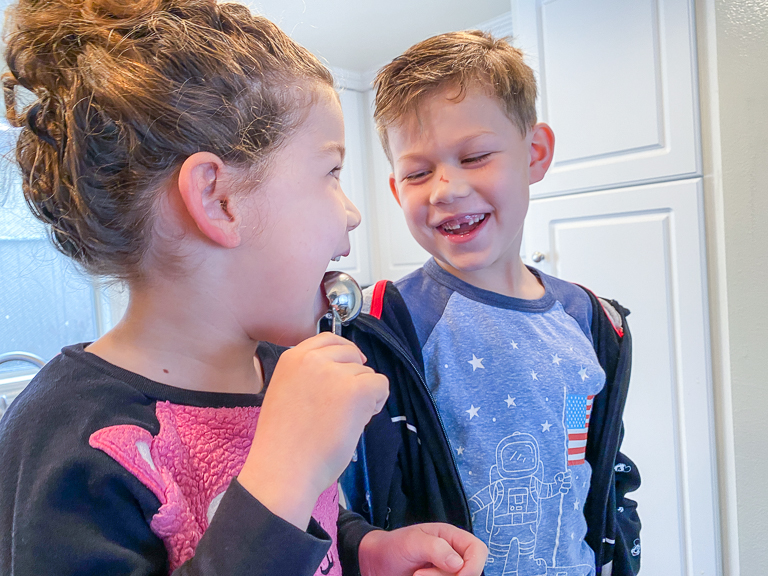 The peanuts went from whole peanuts, to large bits, to small bits, and then started turning into a semi-solid liquid. 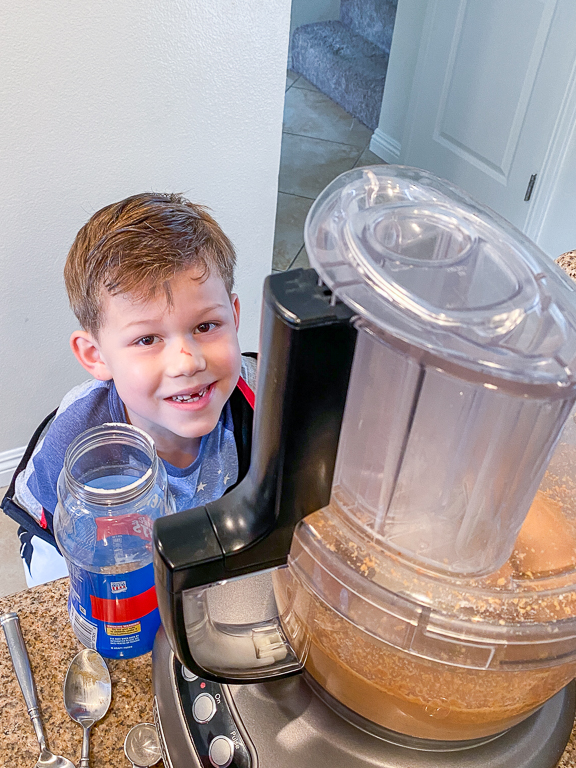 Five minutes is up! Let's check it out! 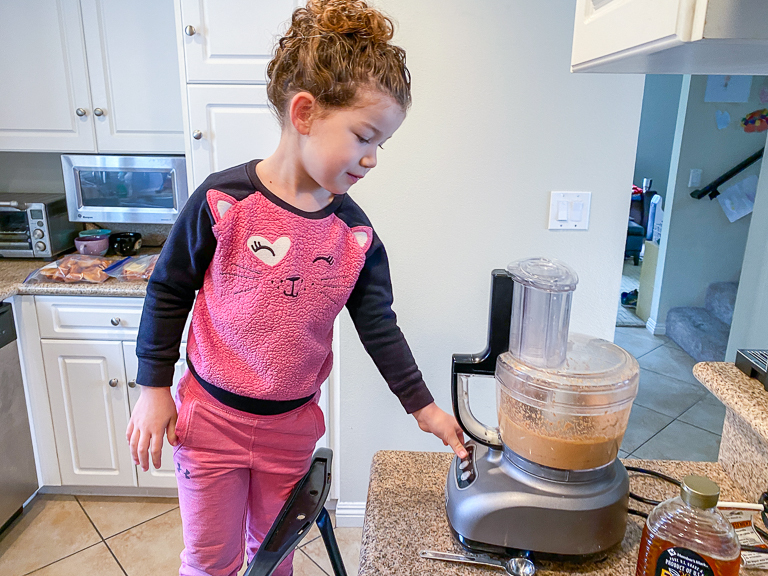 Wow! That looks like homemade peanut butter! We gave it a little taste, I added just a little salt, mixed it further, and now it's time to use! 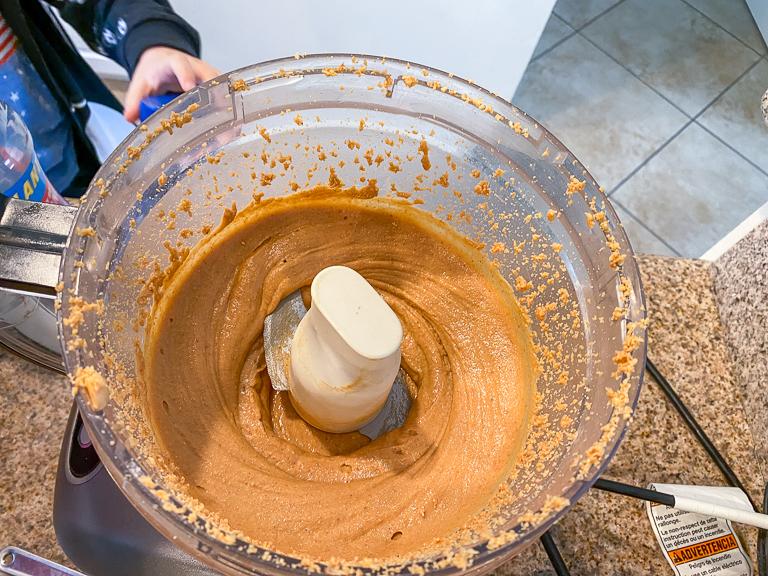 The kids were excited about doing the next part too. Making their own peanut butter and jelly sandwiches! Ian wanted to be sure they were getting butter knives and not something that would cut them. Using those, they spread their homemade peanut butter across slices of fresh bread. 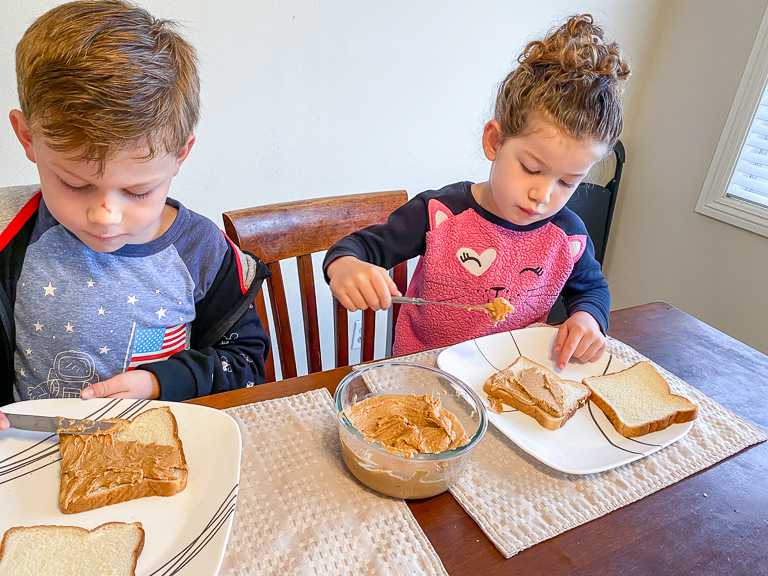 And we've got a good selection of jellies too. Grape, Strawberry, and a special Blackberry Preserves (more behind the reasons for that in a future post). 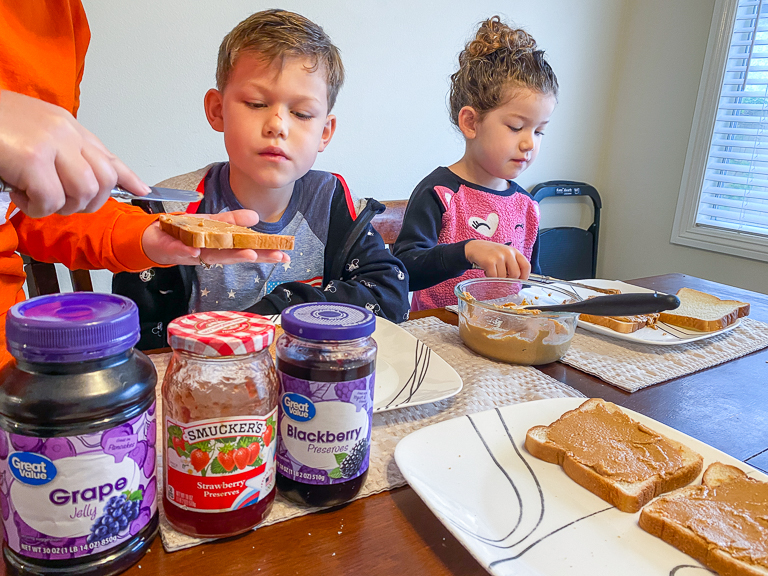 Ian is opting for a blackberry and strawberry mix. 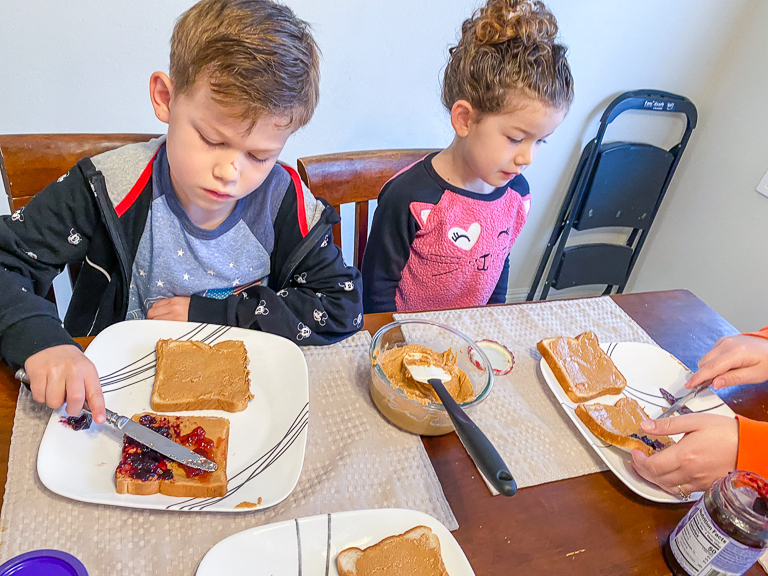 Alli, true to her nature, asked for all three flavors of jelly. She is like her grandpa, wanting to have a little taste of everything. 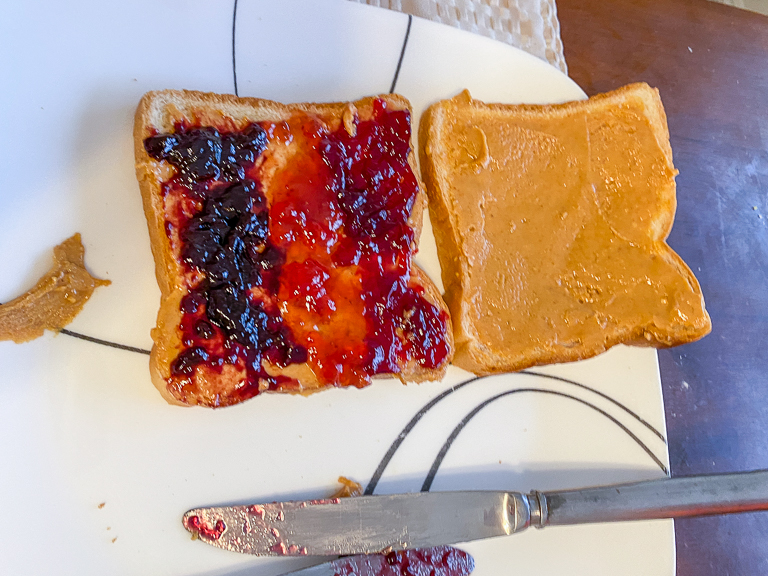 We're going to kick it up a notch and use the Mickey Mouse sandwich cutter to make a homemade Uncrustable. 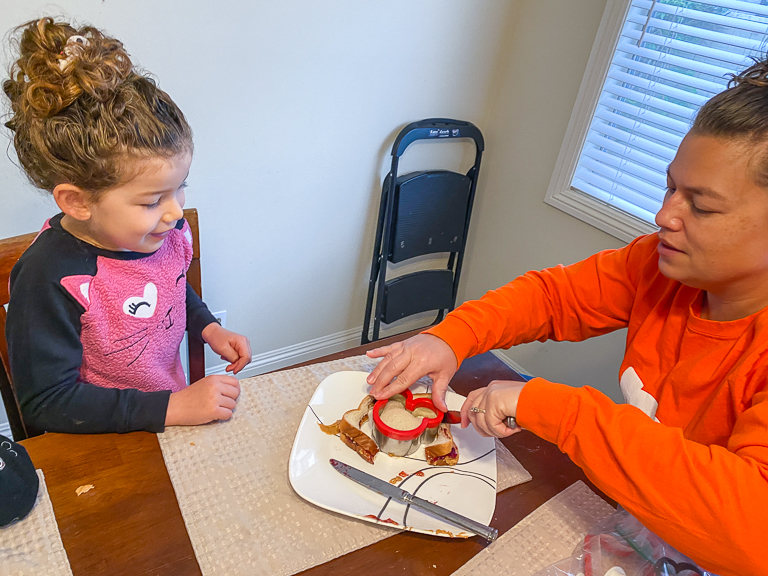 That's adorable. A tip for next time, less jelly and try to keep the jelly away from the edges. The sandwich had a hard time sealing and was especially messy to hold. 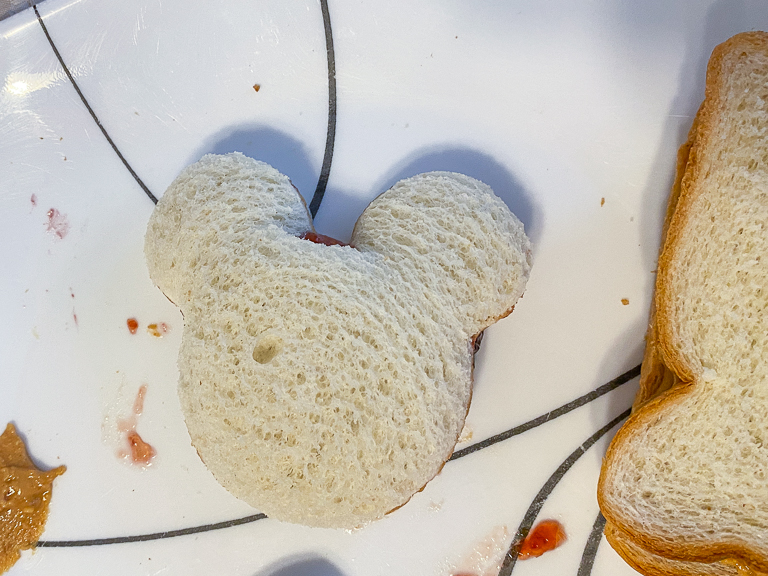 And even though she made an uncrustable, the crust isn't going to waste. 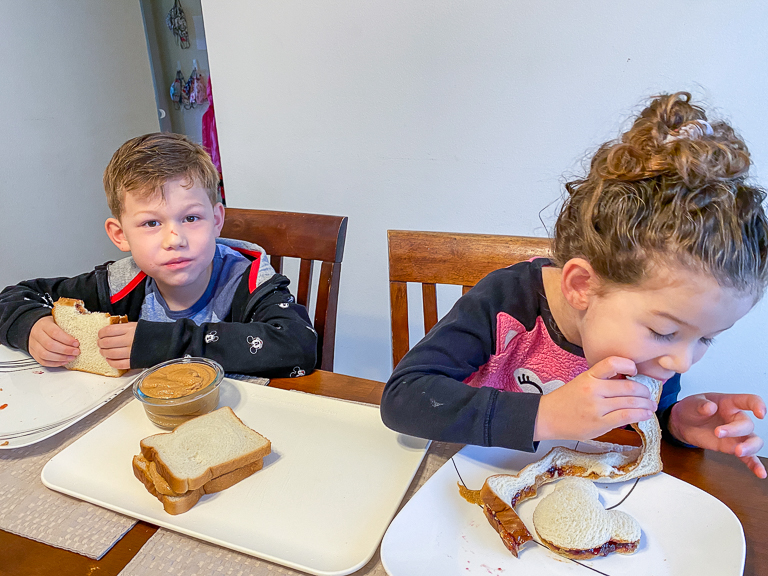 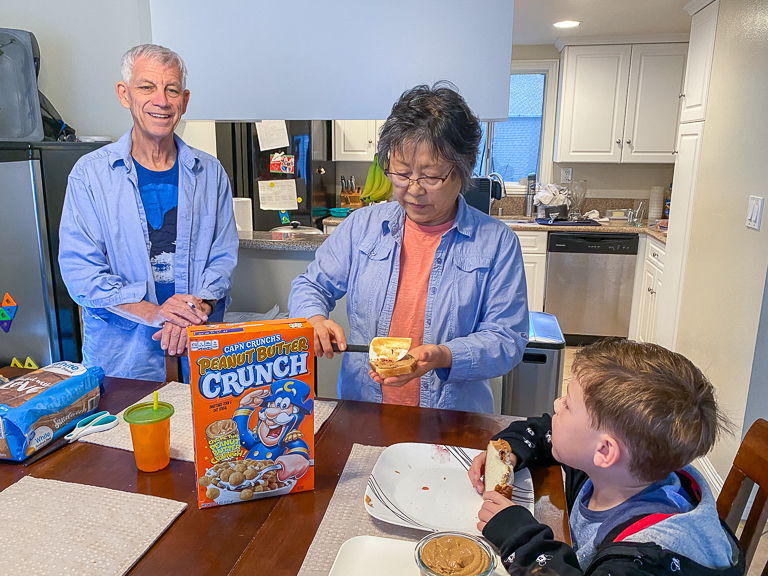 The Cap'n Crunch Peanut Butter Crunch was good and crunchy, but was a little lacking on the overall peanut butter flavor. Ian said it just tasted like Kix cereal. I prefer Reese's Puff cereal if I'm going for a peanut butter cereal. 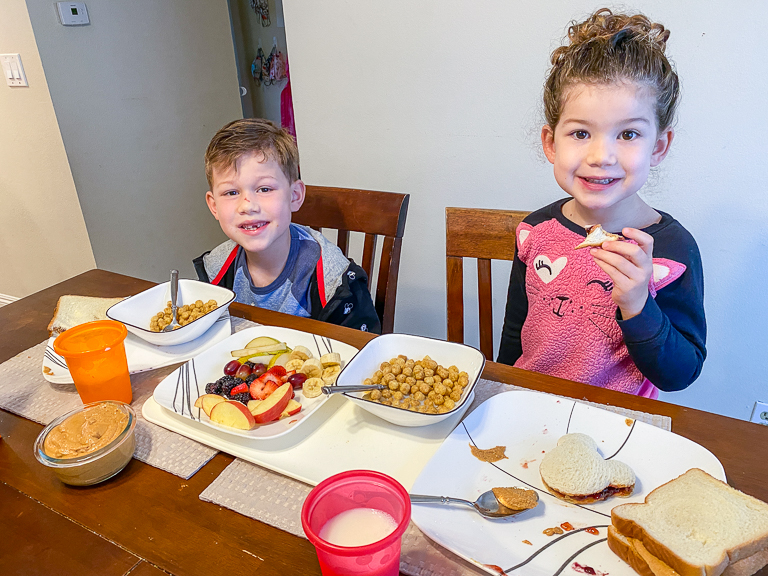 The sandwiches though are a big hit. Peanut Butter isn't part of our regular lunch rotation for the kids, but after this, they both asked that we make it more often. 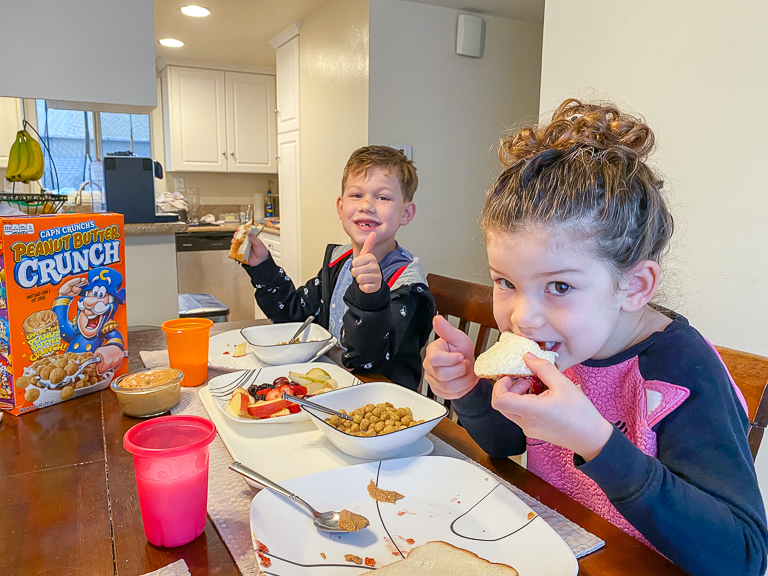 Just a few bites into his sandwich, Ian was asking for a drink. It immediately reminded me of this classic Got Milk commercial.
You know what else is good to dip in peanut butter? Fruit! 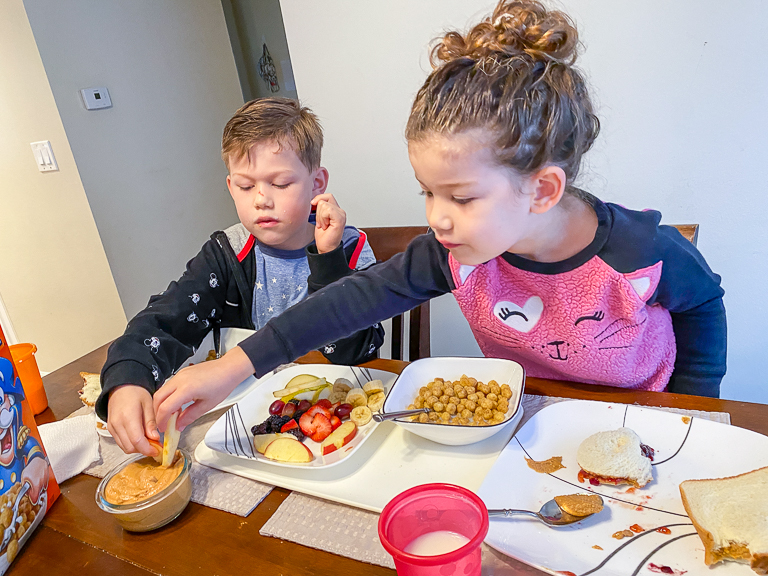 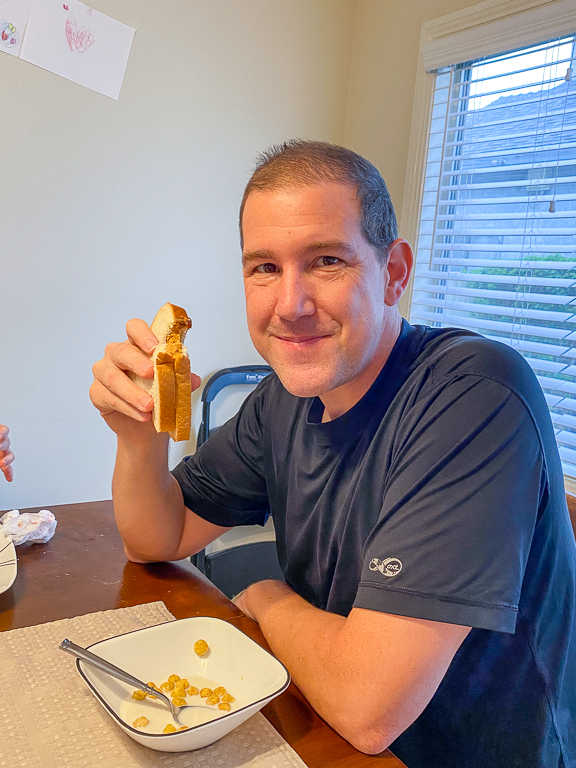 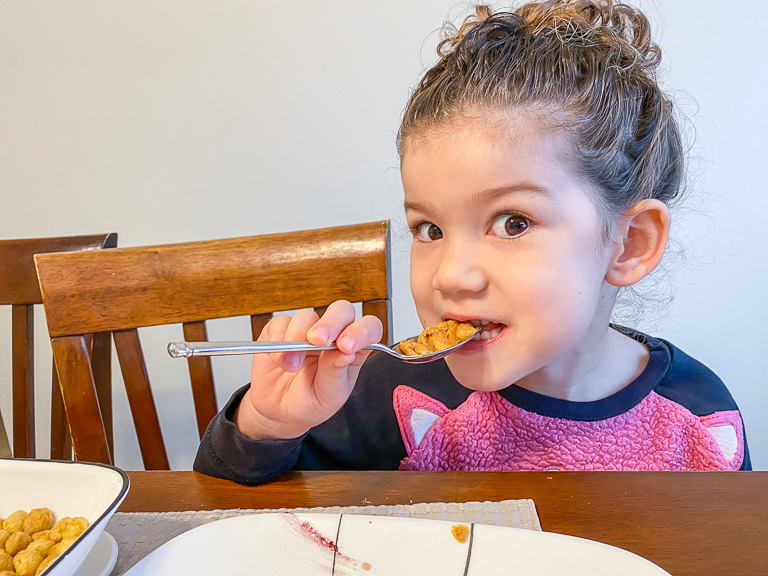