Happy Sunday! Another day for making one of our favorite dinners. Pizza!
We've got a special one today, courtesy of a YouTube channel I follow. It's a pan pizza, similar to Pizza Hut, but with a different topping called Gremolata. Let's get started! 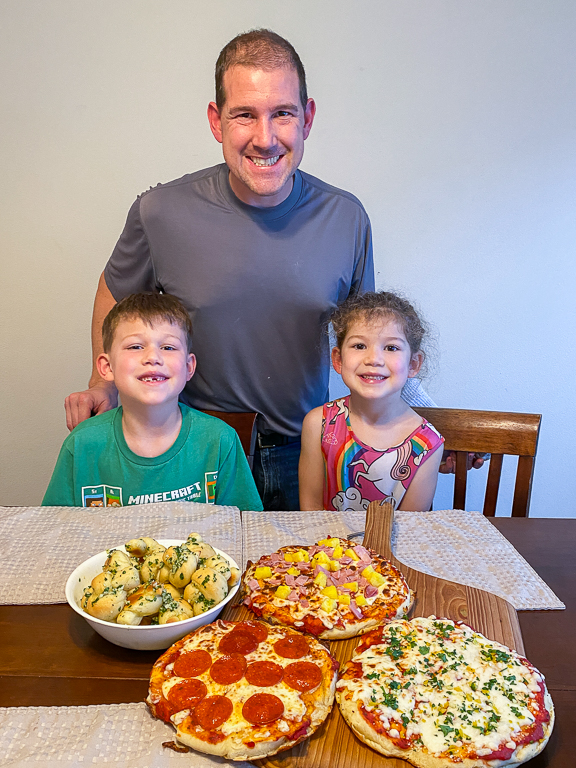 First a quick look at the YouTube video. I like the channel because Adam's a quick talking chef who has a good delivery and makes tasty things. I also like that whenever he needs to add honey to something he says to "Summon forth the upside-down bear!"
Anyhow, following his recipe for pizza dough, this is the first time I've used milk in a pizza dough. 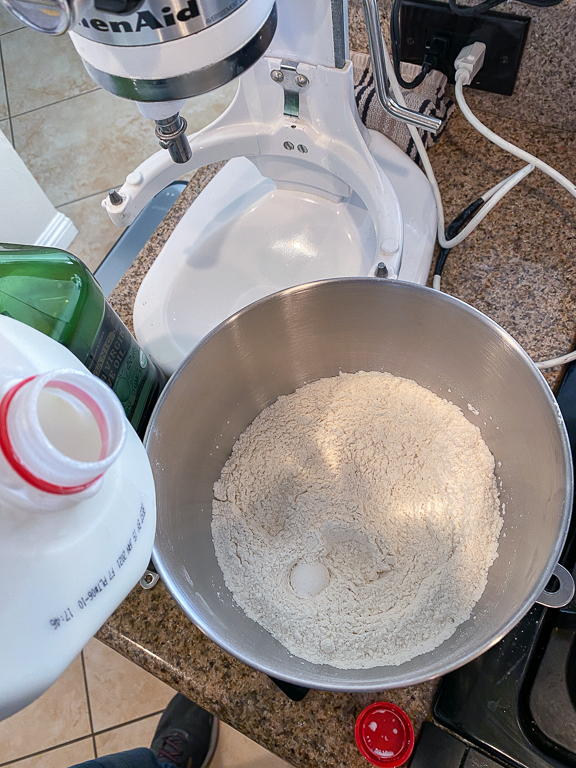 Hearing the news that one of the restaurants near here, C&O Trattoria, is going to be closing for good due to COVID, made Theresa want to try making their delicious garlic knots.
A recipe for C&O Trattoria Venice Garlic Knots from freshfoodinaflash.com promises to make them very close to the real thing. The dough couldn't be more simple. Measure the dry ingredients and oil into a food processor, turn it on and then add water until it forms a ball. No kneading required. 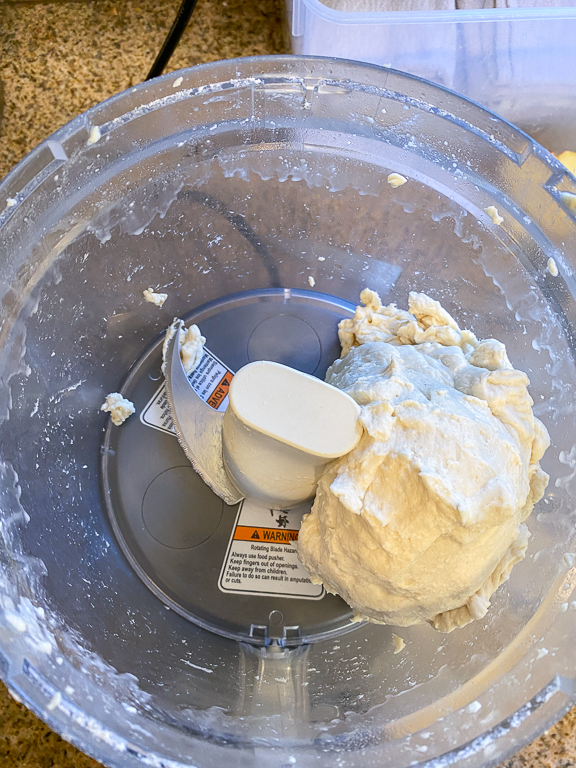 Because it's a relatively cool day, both doughs went into my oven to double in size. 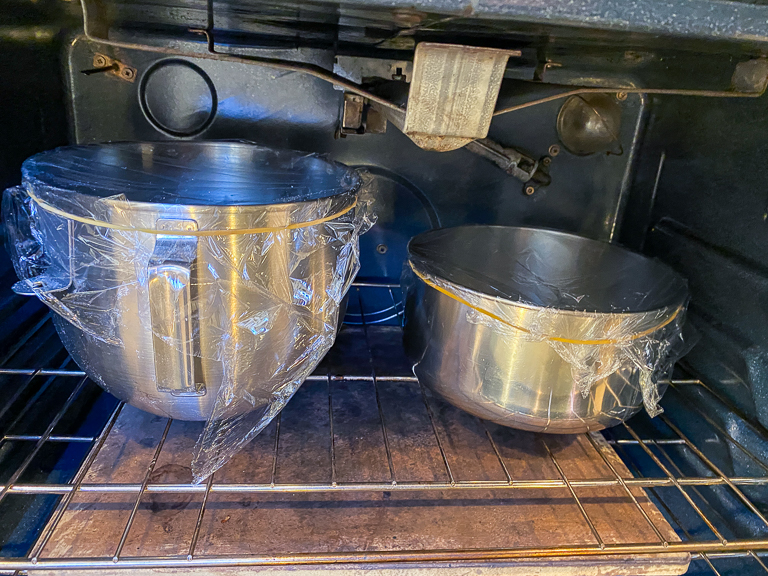 First out are the garlic knots. Using a floured countertop and my rolling pin, first I flattened the dough. 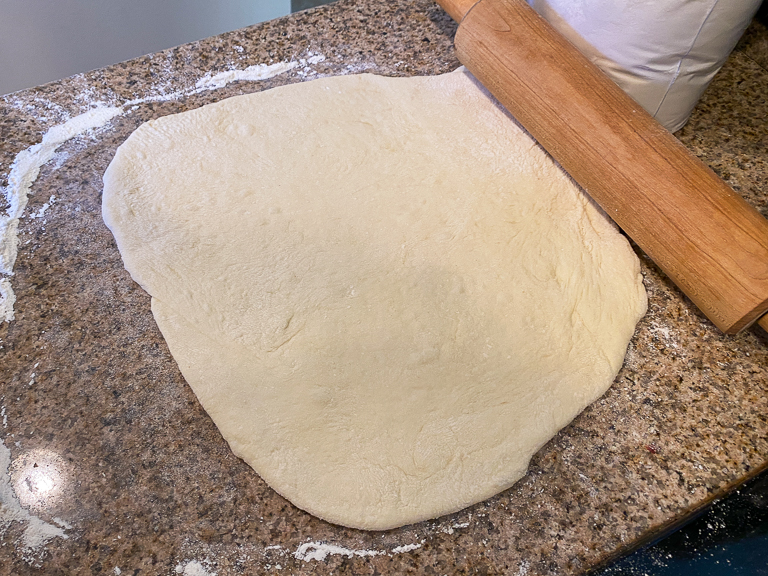 Then cut them out into strips. The original recipe makes 50 knots! I halved it and made 25. 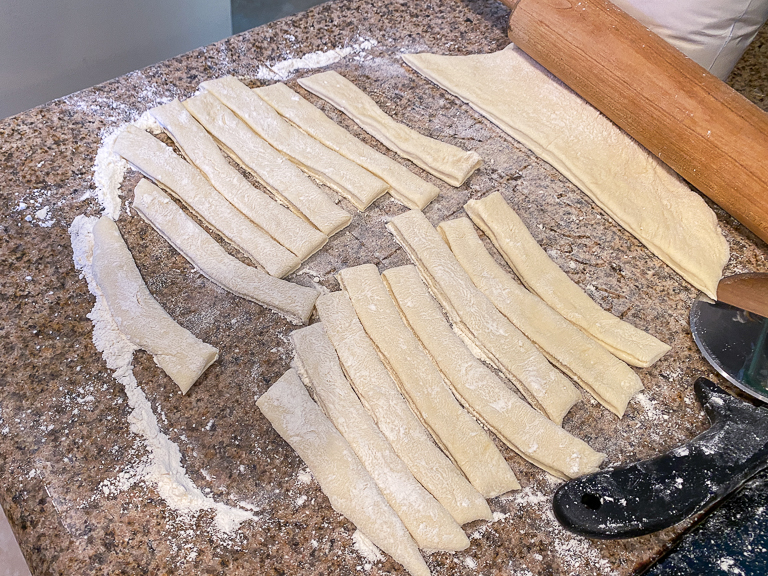 Making sure to flour the dough strips, Theresa and I tied them into a loose knot. 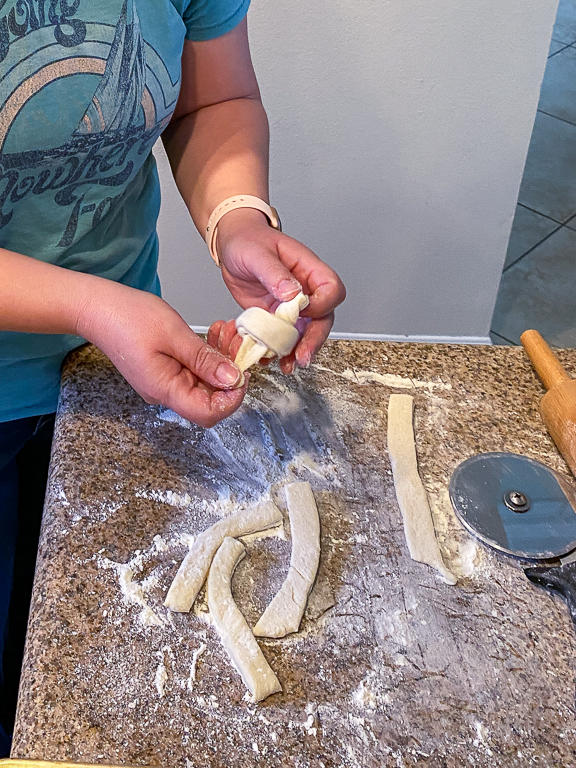 These will rise again for 30 minutes. 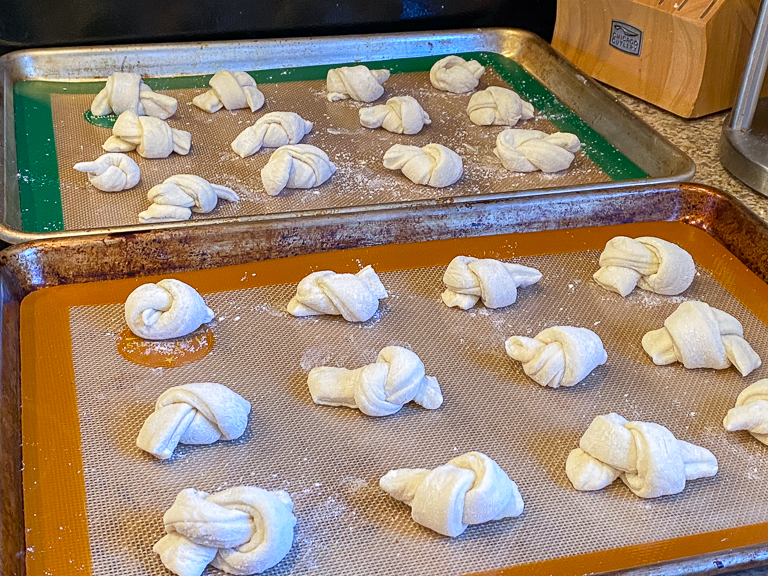 If we're making pan pizza, there's got to be a pan involved, right? Into the bottom of a pan I added olive oil plus some spices. 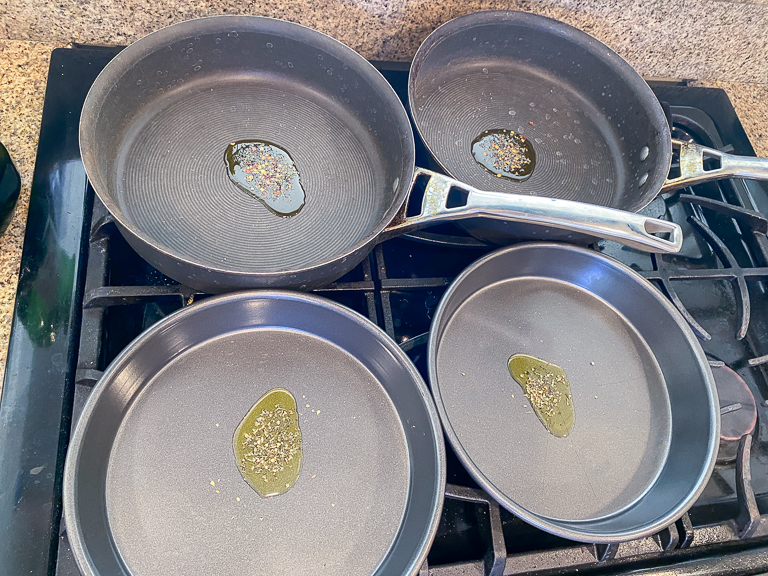 Then I tossed about a quarter of the dough into each pan. 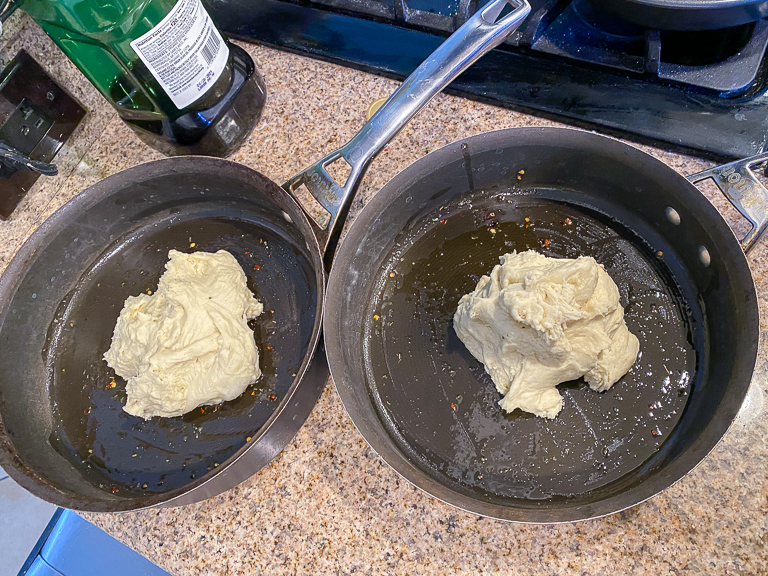 Using my fingers, I spread the dough out over the entire bottom of the pan and let it rise again. 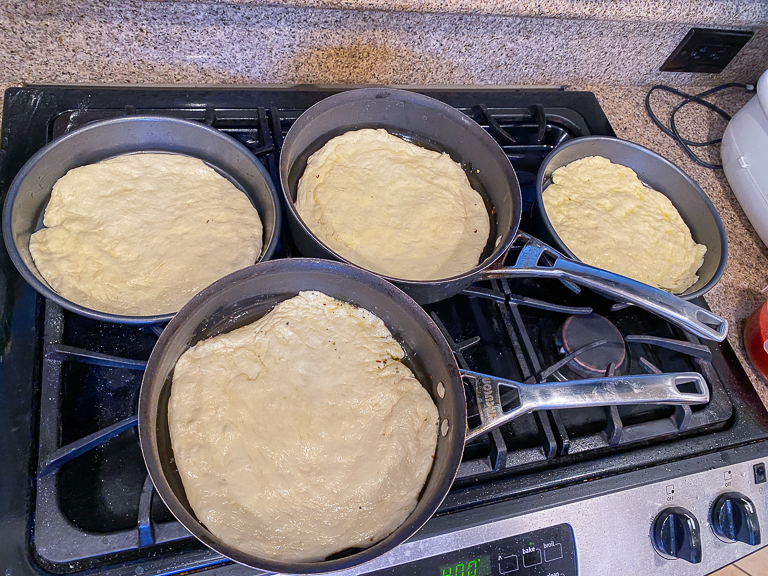 I'm cooking the dough completely in the pan. I can check the bottom of the crust and make sure it's the right doneness. I quickly switched from these cake pans to a regular pan. The cake pan was too thin and conducted the heat without spreading evenly. 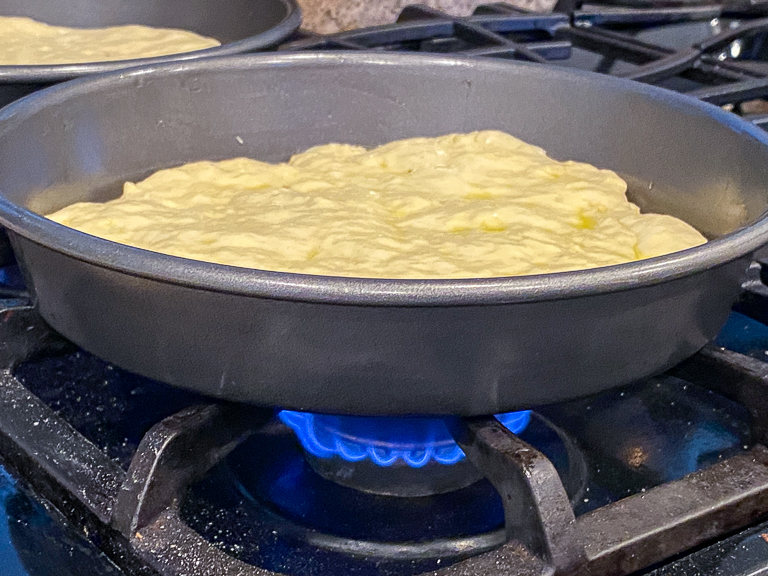 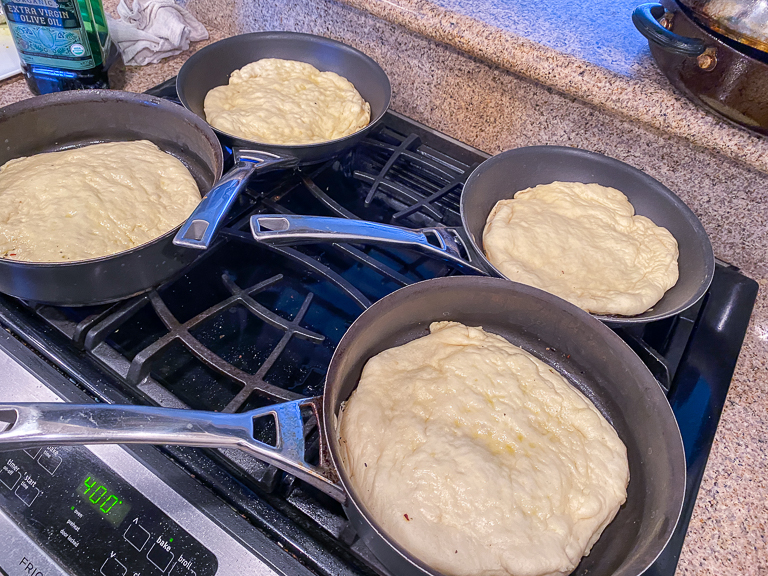 Once the dough is almost done, the sauce goes on top, all the way to the edges. 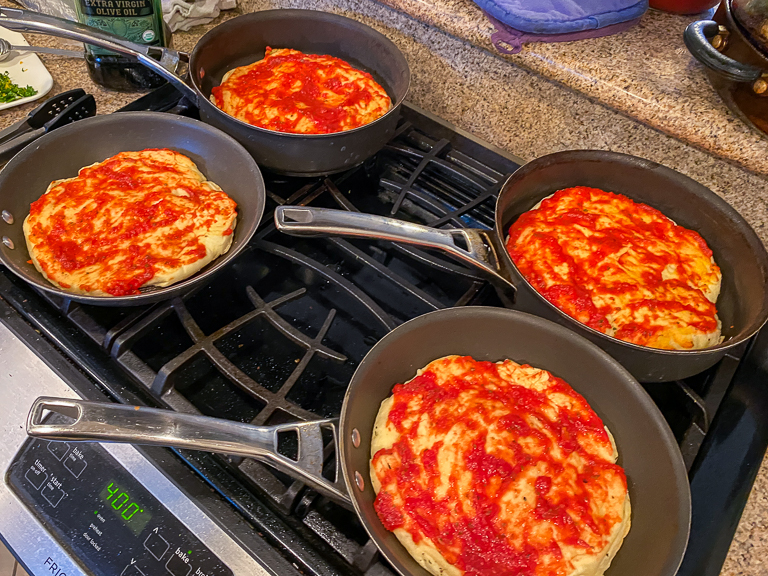 Gremolata is a fine chopping of parsley, lemon zest (from our lemon tree), and fresh garlic. 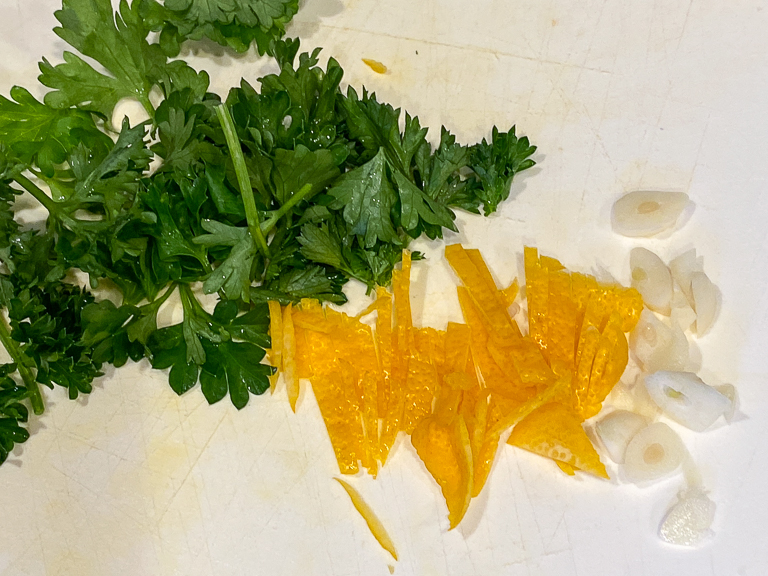 Those garlic knots are finished baking, so I tossed them into a bowl and handed them off to Theresa. 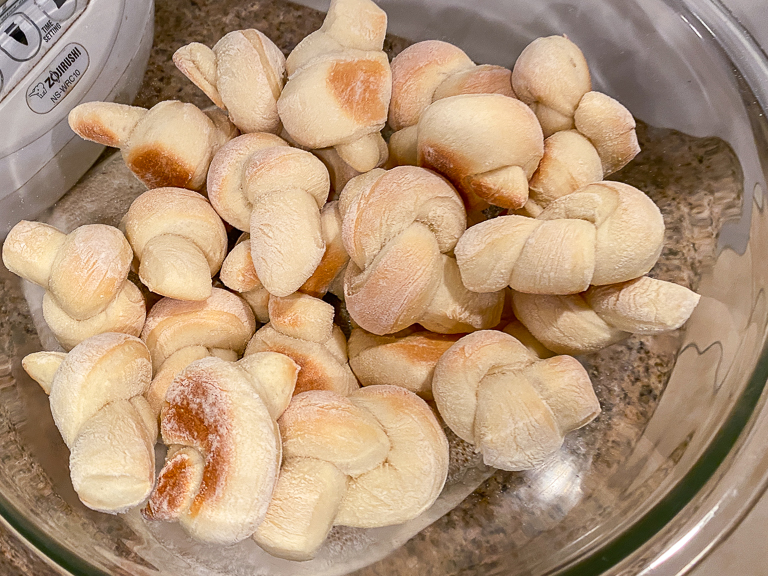 She's tossing it all together with some butter, olive oil, 8 cloves of garlic, parsley, and kosher salt. They're going to be fantastic! 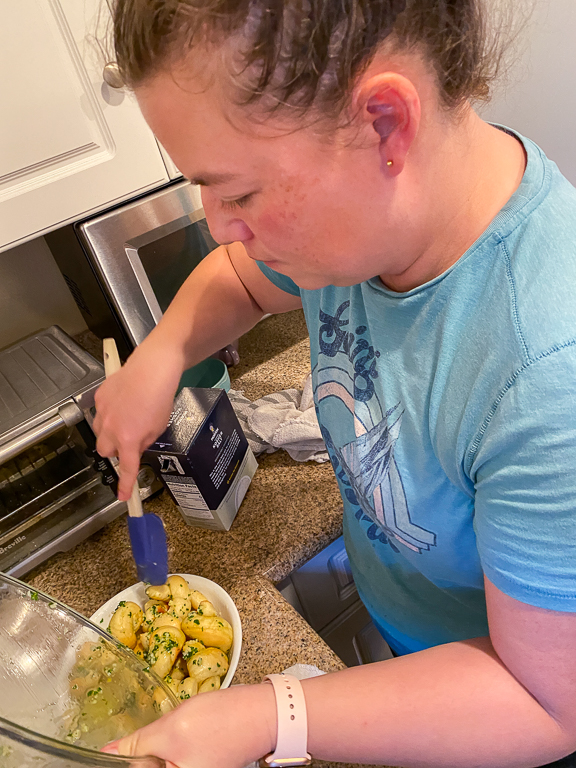 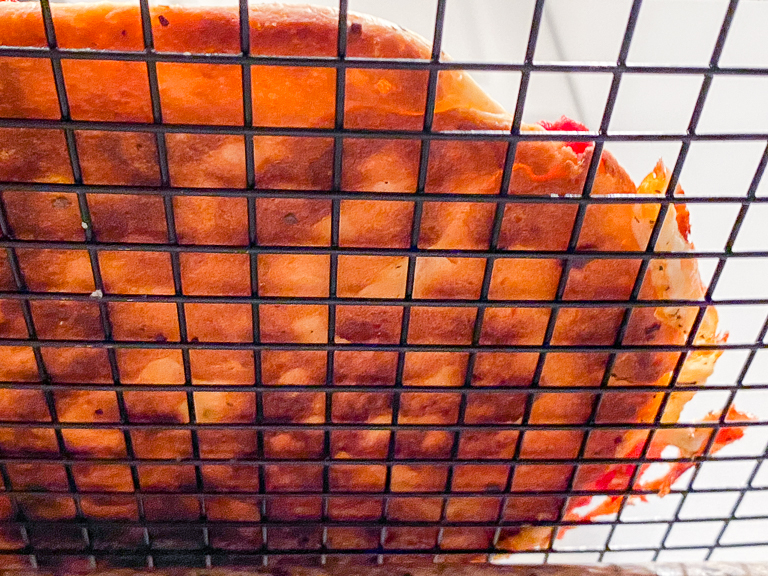 Smile kids! We've got a few pizzas tonight because due to the size of the pan, I can only make a 10" pizza. 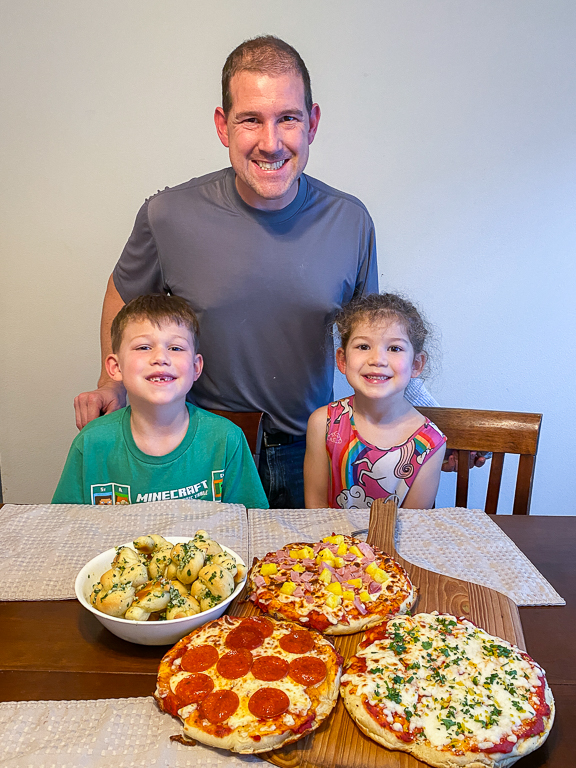 A new one for us is this Gremolata pizza. The lemon zest really came through. It was a nice fresh take on pizza topping. 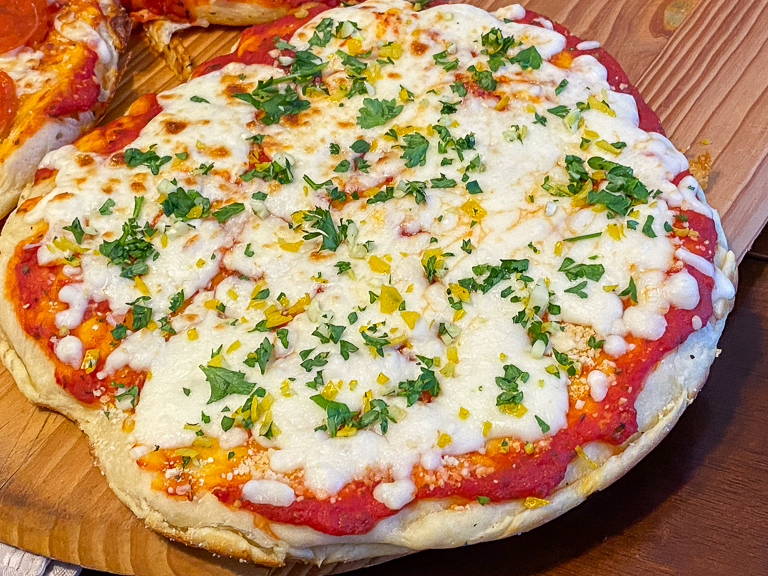 Ian loves pepperoni pizza so I had to make him one of those. 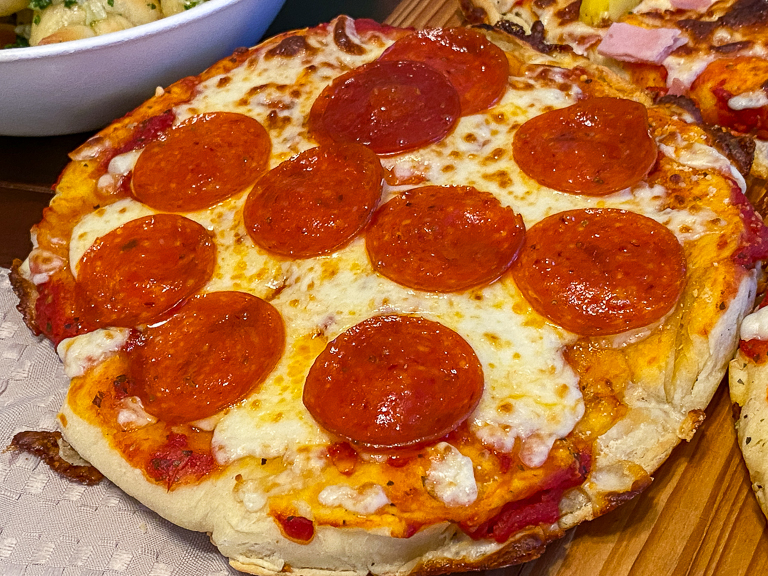 Richard and I love hawaiian, so I made one of those too. 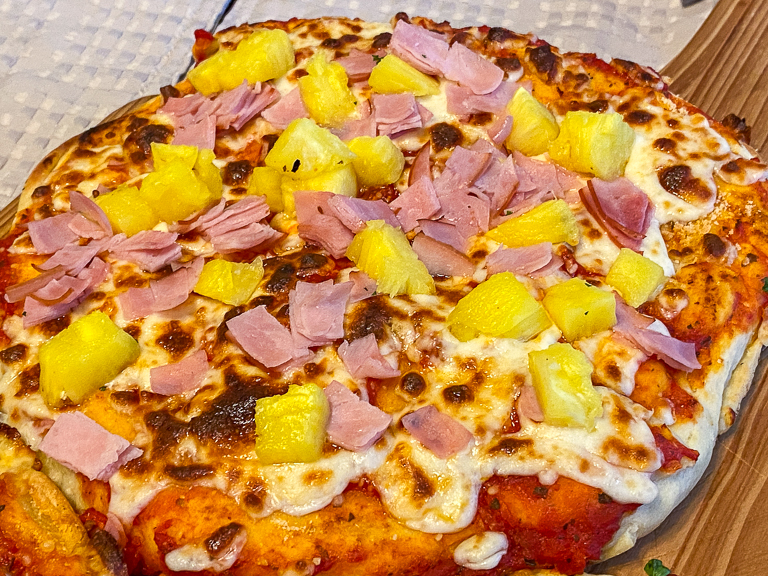 I didn't make the photo above, but Alli requested this pizza last week, and then again this week. Just a pizza crust and sauce on top. No cheese or other toppings. 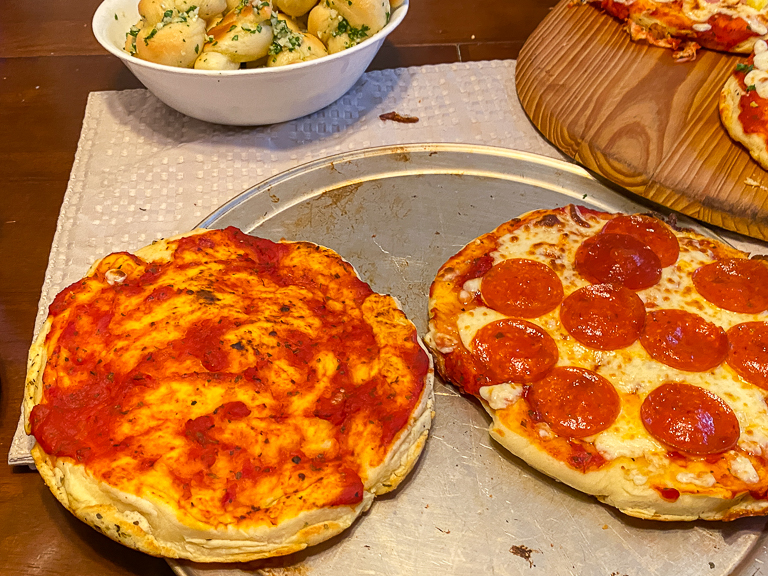 Those garlic knots are looking fantastic! They don't look like C&O knots, but I bet they're still so delicious! We'll have to try again another time to replicate C&O. 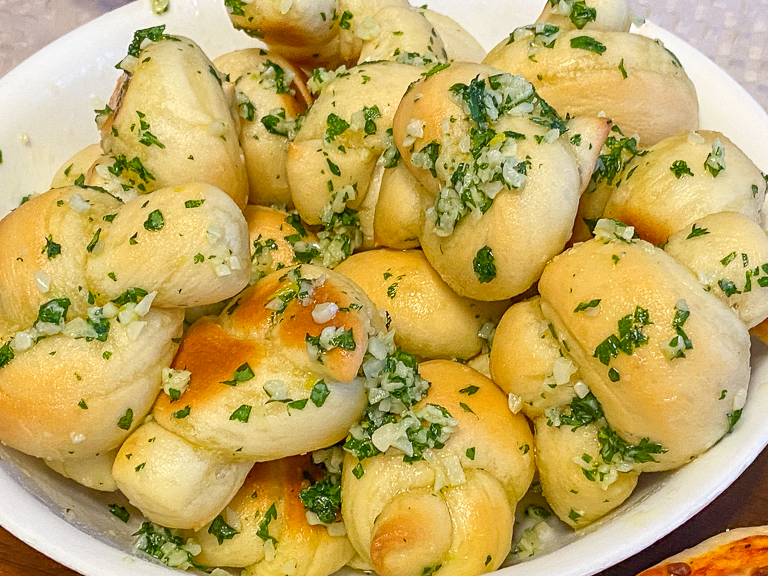 Theresa's cutting up our pizzas to pass out. 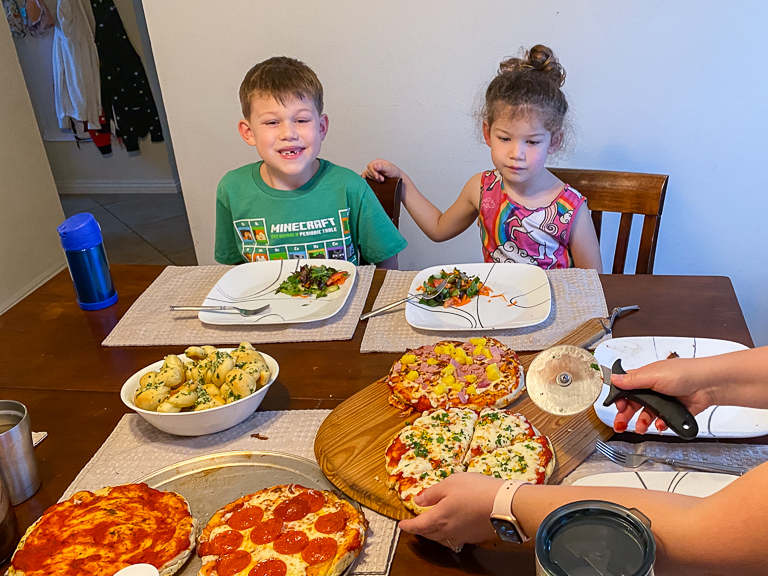 My first plate. It was all delicious! It doesn't beat my homemade crust, but it's good. It also isn't Pizza Hut exactly. Theirs is really greasy, and I just didn't use that much oil. 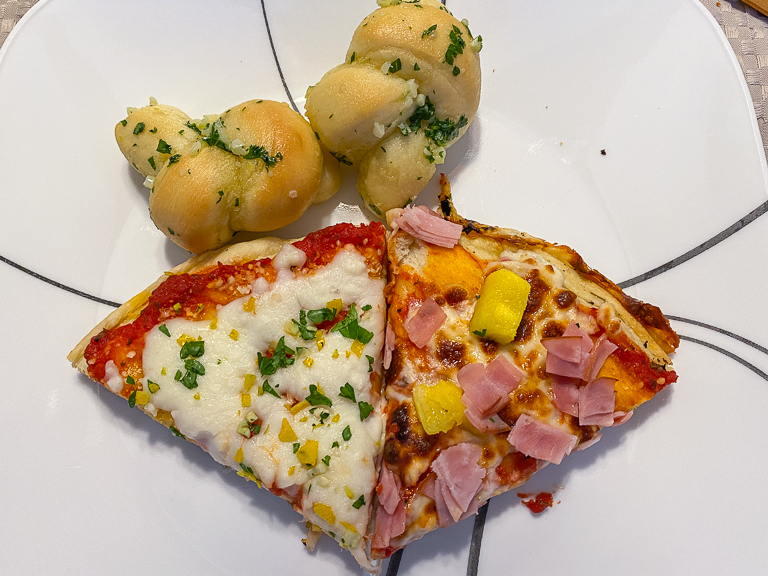 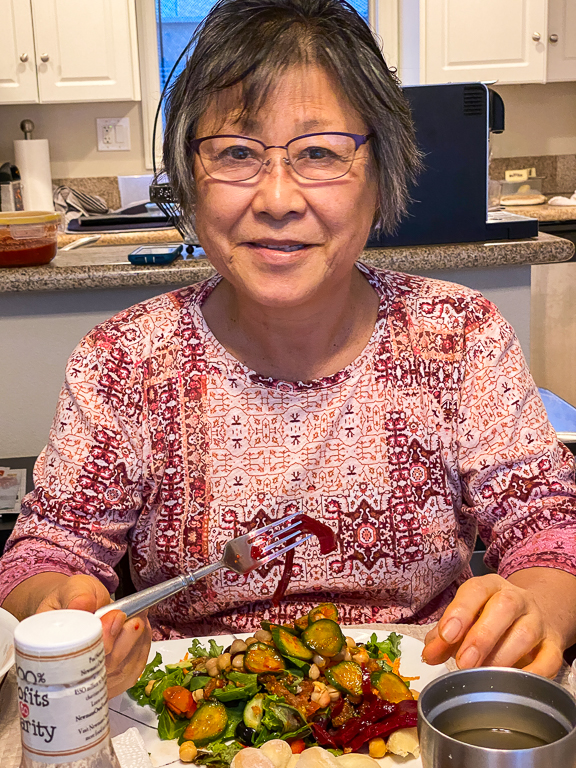 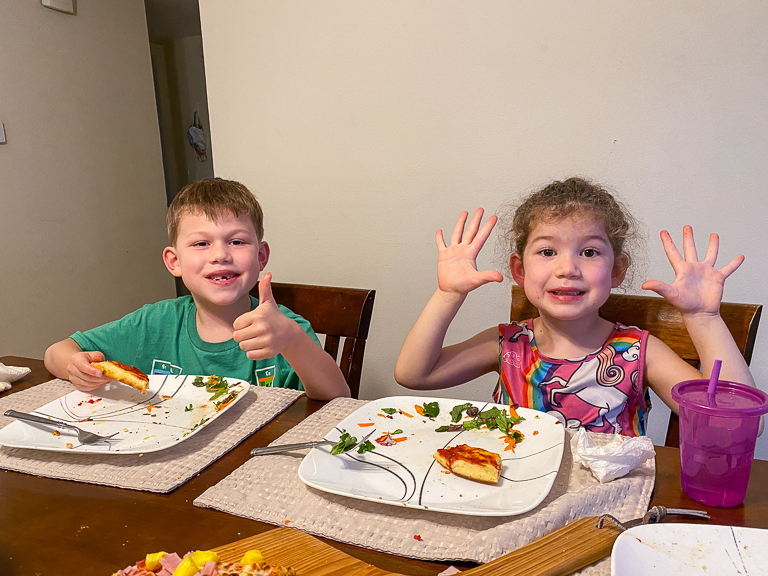