Wow. We've been in Florida for so long! It is just about time to leave, but we've got a week, just one week, to get the last of our Disney fix in before it's time to say goodbye.

Since it's Spring Break at this time in Florida, I was actually having a difficult time making reservations. My pass can only hold 3 reservations at a time, and after using my two from last week, no free days were opening up for our final week. After searching and searching, finally an opening popped up for Monday! Whew! I was getting worried that our last week in Orlando wouldn't including any Disney in it! Then through constant checking, I was able to get something every single day of the week. Maybe not in the park we wanted to be in, but at least we can park hop after 2pm. Let's get going!

The first part of the week, we spent in Epcot. These Minnie Vans were lined up all nicely and in a row in the Epcot parking lot. They were even in numerical order! Of course our Minnie lover had to have a picture with them. The only thing that would have made them better is if they would have been pink. 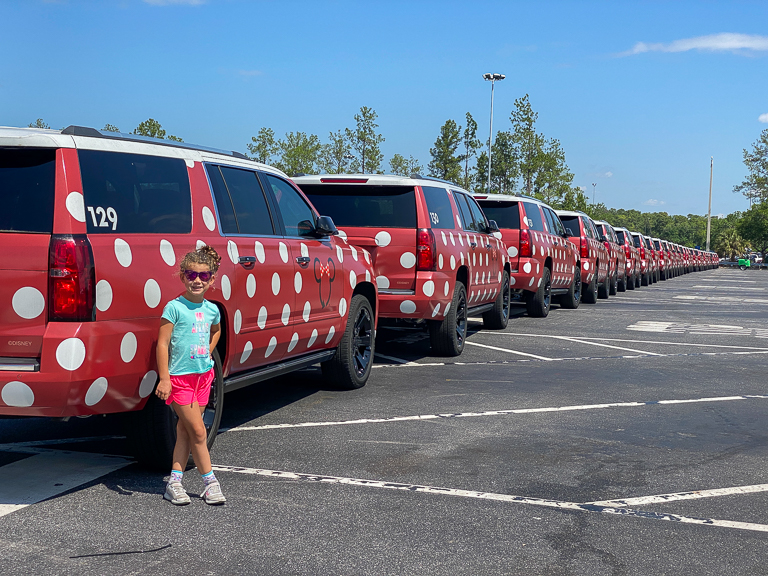 As the months have gone by, the kids figured out fun things to do on the walks to and from the park. They are working on their parkour skills and these posts have been a constant challenge. Now though they can both consistently jump, shimmy, and make their way over them. 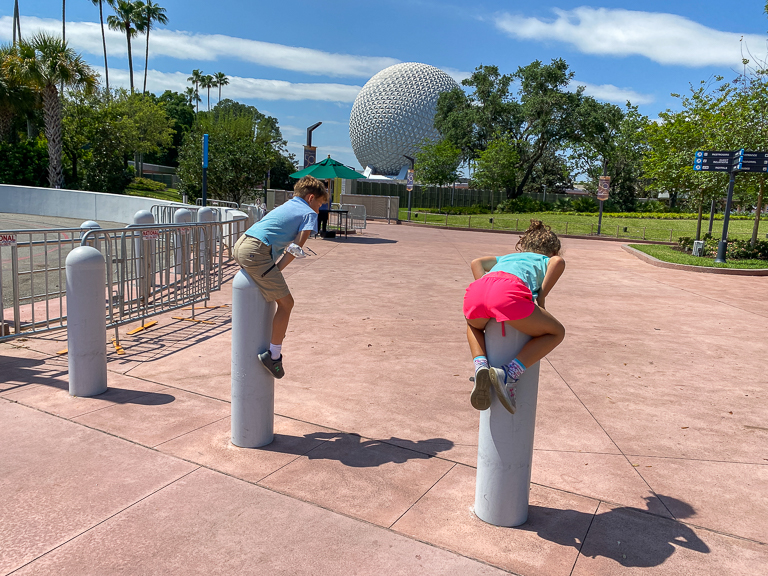 We spent time doing some of the things I wanted to make sure we got in before we go. Things you might have read about already, like the Epcot Eggstravaganza which you can read all about on Micechat.com! 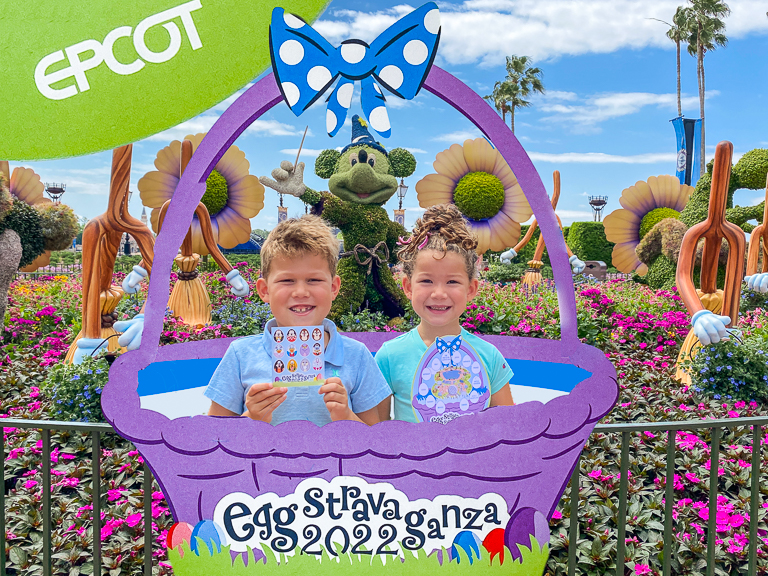 And other things you haven't read about yet, because I still need to finish writing them up. 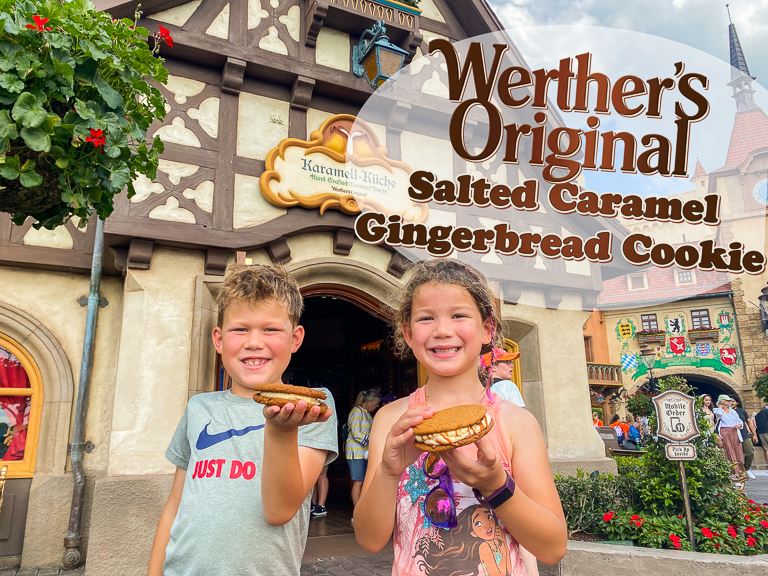 After doing the Easter Egg Hunt on Monday, on Tuesday we were right back at the parks again. Our reservation is for Epcot, but we're parking all the way up in the Hollywood Studios lot. We do need to get some walking miles in too. 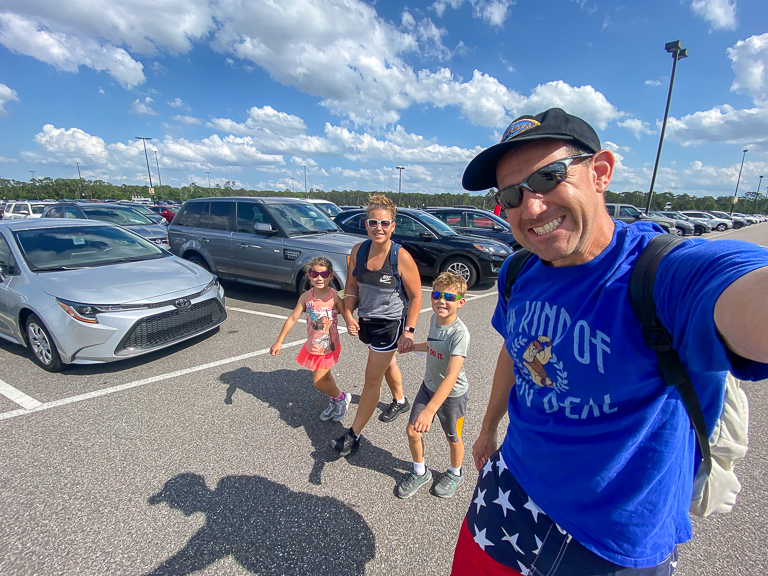 And in the parking lot Alli found a super pink car that she adores! 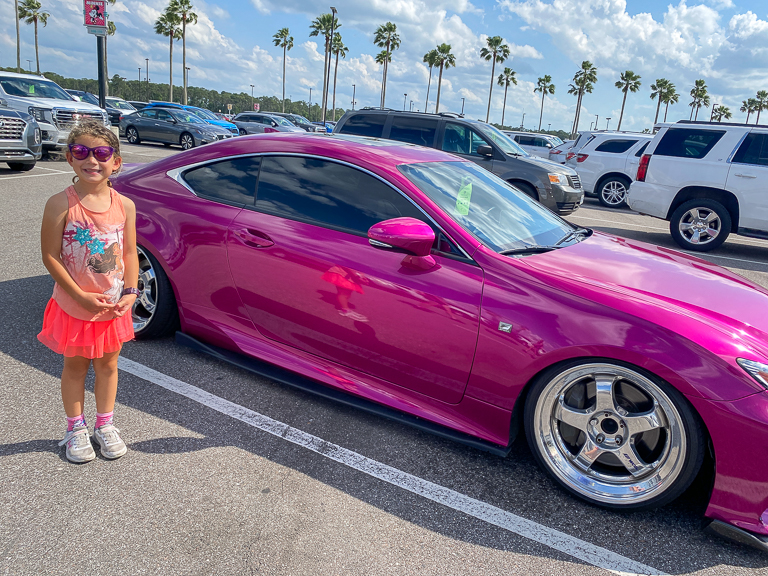 The walkway to Epcot is nice and wide. The kids have no problem getting that mile in. They're usually running up ahead and playing games while Theresa and I catch up.
After getting to Epcot, we made our way to the Karamel Küche and assembled our homemade cookies to compare. 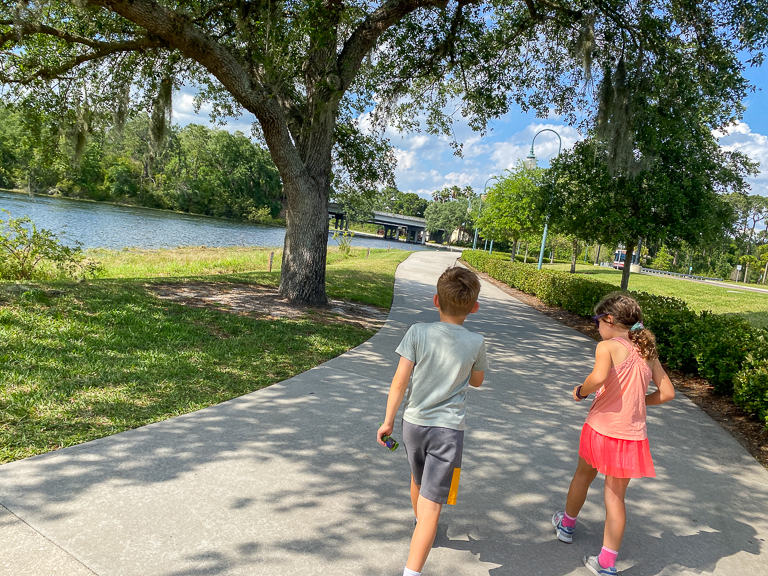 And then we got to do something really fun!
Samantha and her family are friends from back in California! She's part of the Disney College Program and our schedules finally lined up that we were able to catch her while she was working! She's working at the Gran Fiesta Tour in the Mexico pavilion, and we were able to catch her a couple different times. Once at the front of the line, working as the greeter. And then another time as the bottom, asking how many people are in each group and directing them to a row. It's a fast-paced job, and she was doing a great job of it. 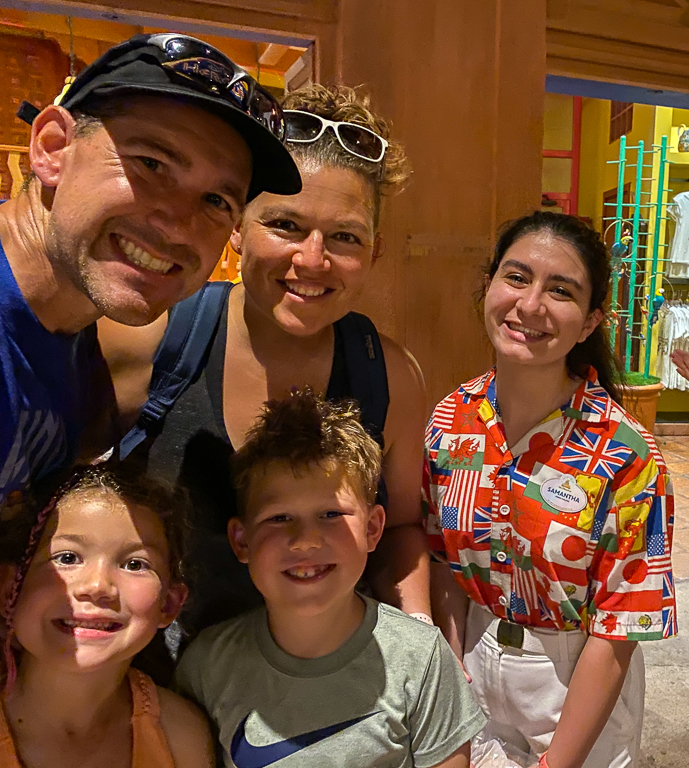 We've got to sample sodas from all around the world again. That's a great part about Epcot. You can go at any pace you want. 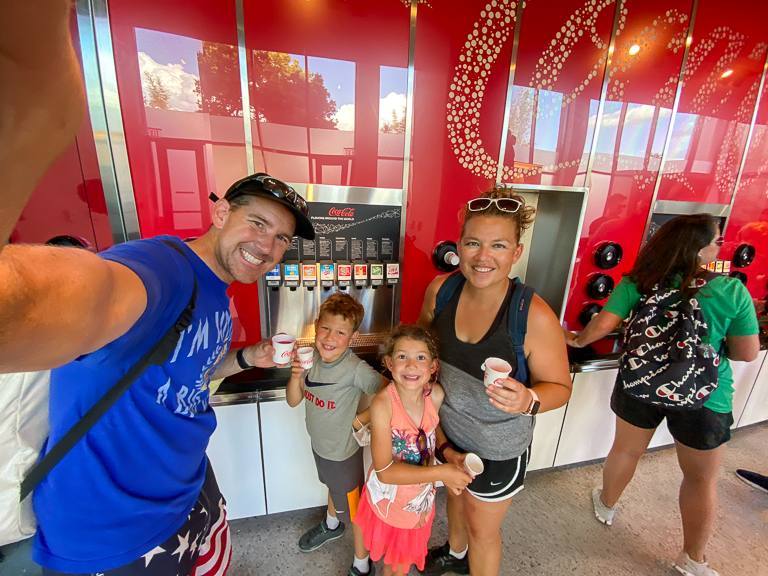 To close out the day though, we're headed back over to Hollywood Studios. After walking along the boardwalk, we stopped by the car to grab a quick bite for dinner. 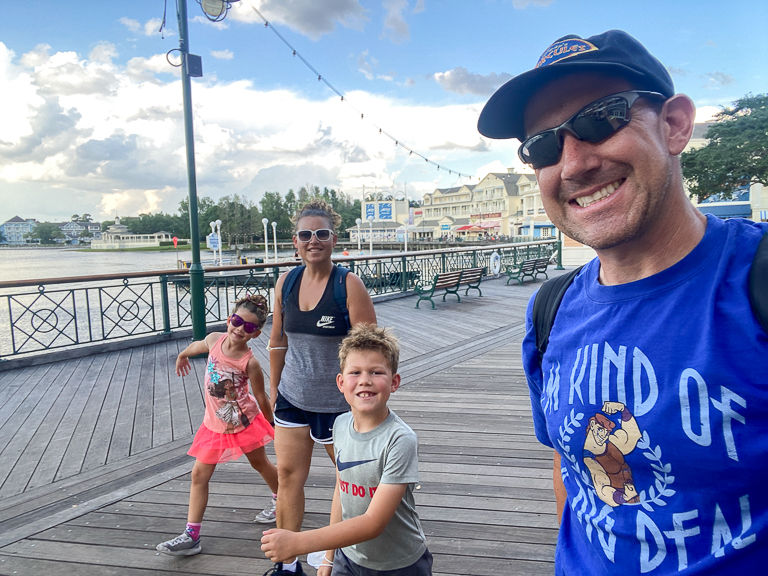 Then it was time to go on some rides! Since this is the last week, we're doing the ones we really really want to go on, and staying away from the "filler" rides. That means even if a ride has a long wait, we'll still stand in line. So we waited in a 50 minute line for the Rock 'n Roller Coaster. 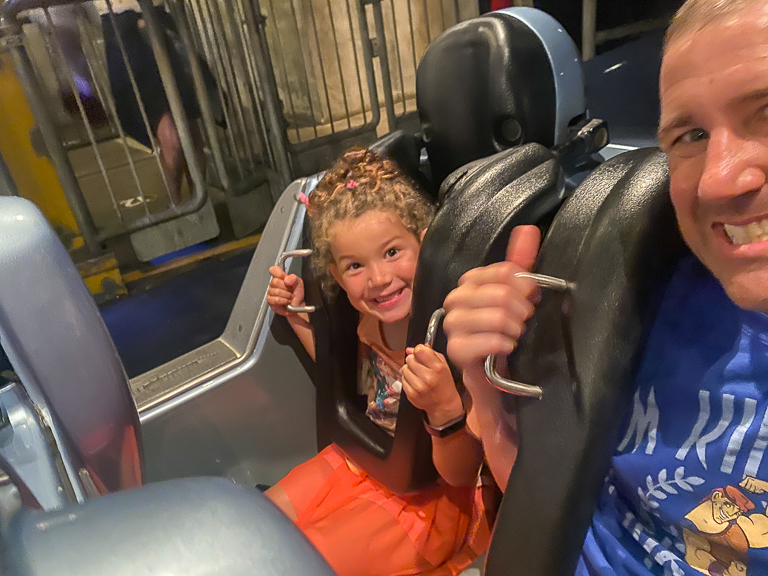 Ian wanted to ride in the front row, so he joined another single rider and had a great time. 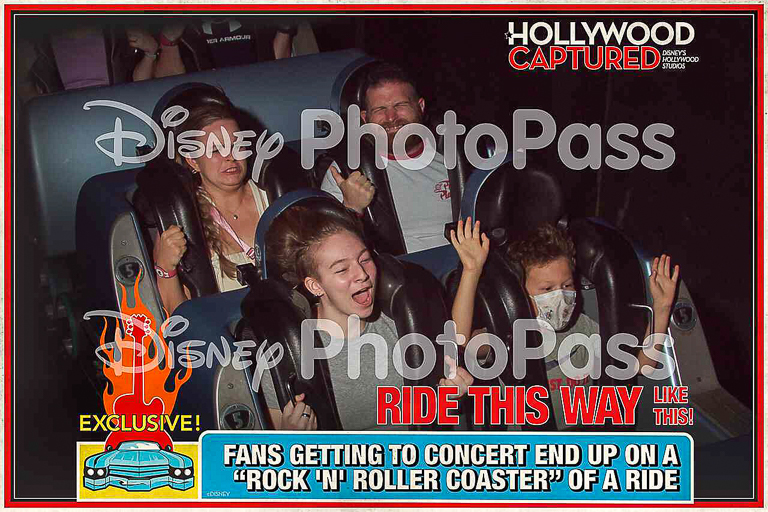 Alli wanted the back row, so waited our turn for that. Right as we were waiting to launch, the countdown started, but the coaster cart didn't move. We heard some unintelligible words coming over the loud speaker, then sat there for a little longer. Eventually a cast member came over to our row and asked Alli to make sure her arms were on the outside of the headrest and not the inside. Once she was safe again, our limo was launched into the Los Angeles streets like normal. 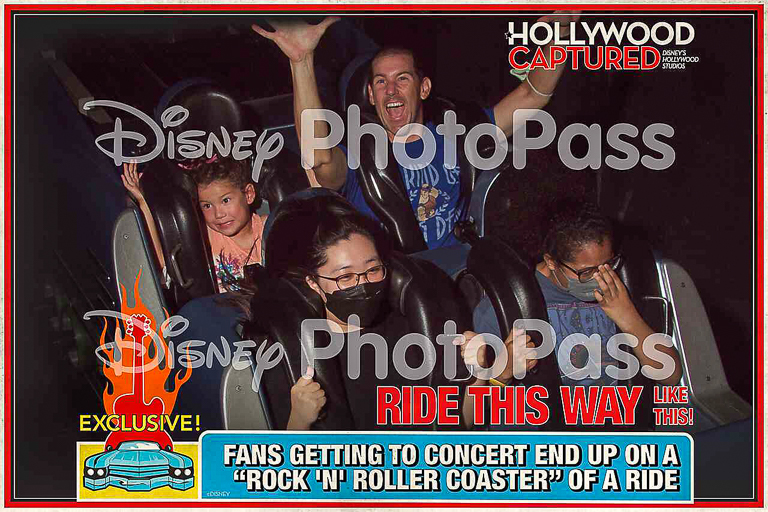 At each park, I think it's appropriate to get one last treat. Don't you? Ian's been wanting his own Num Num cookie ever since Jacob got one a couple weeks ago. 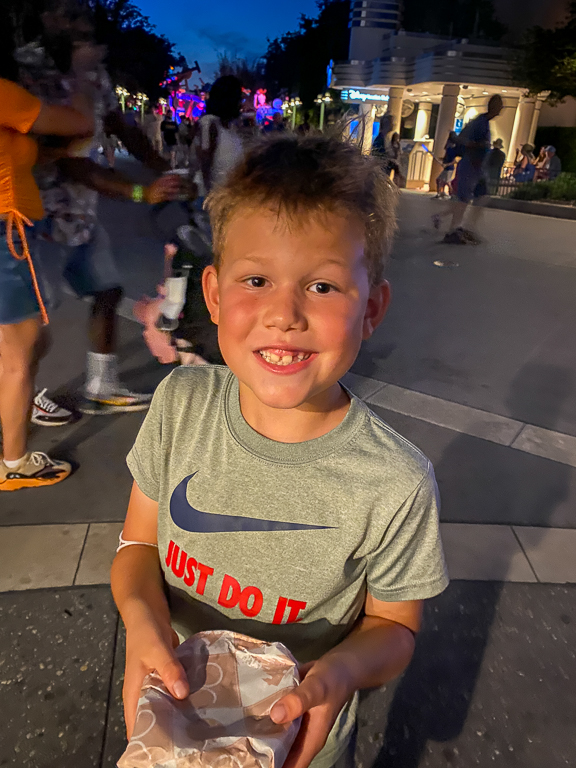 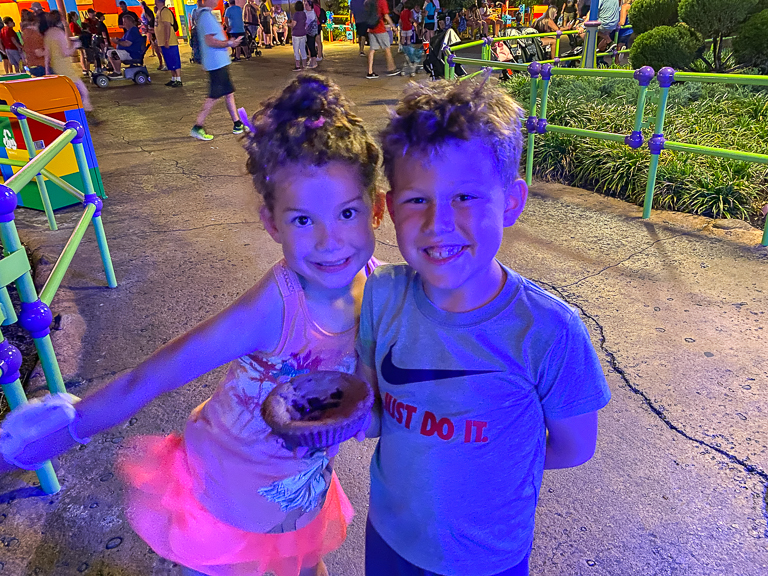 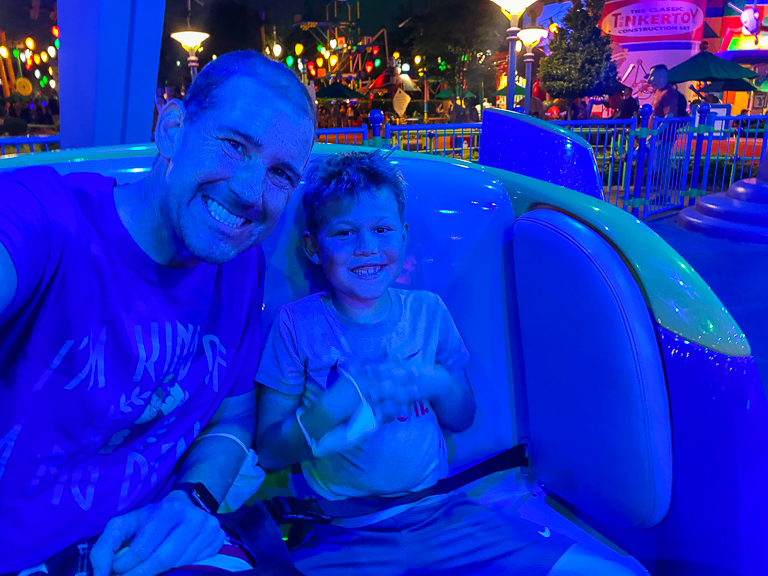 The Tower of Terror is one of his favorites, but it's always such a long line! There has been a maintenance on one of the two elevator shafts, so the line moves especially slow. Even after the park closed, it still took 45 minutes of waiting to get to the front.
"We need to scan your hands for security clearance!" (Wait, that's the Guardians ride, not this one) 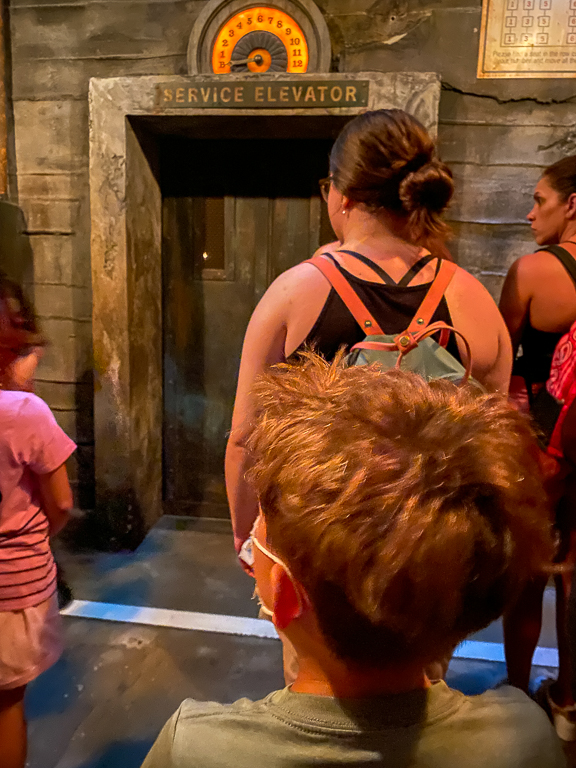 He loves the free-fall feeling. 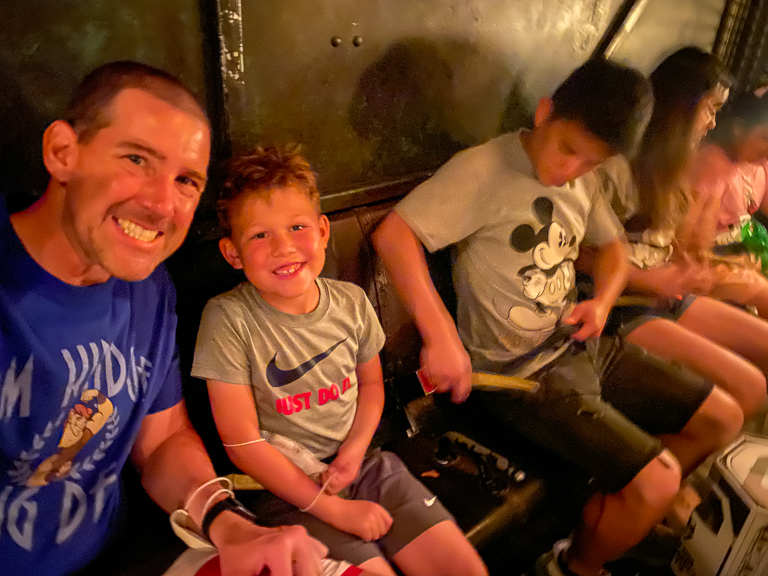 Big hands in the air.
Well today was a lot of fun! Let's try to do Disney again tomorrow! 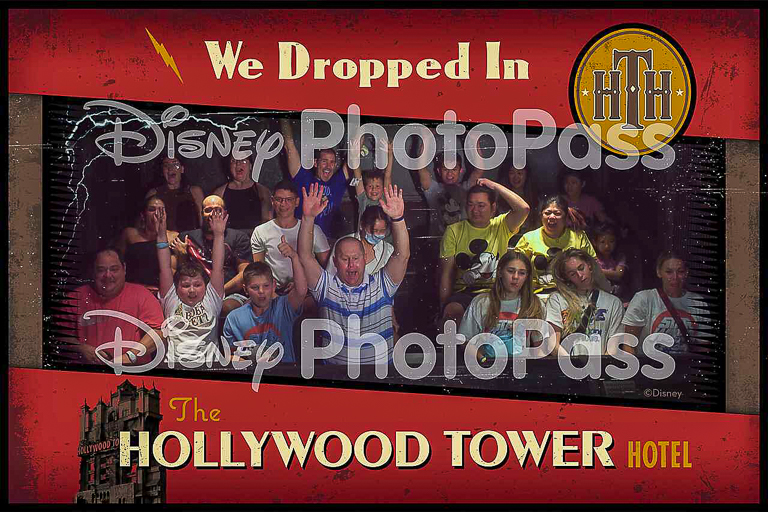