Inspiration can come from anywhere, right? Theresa has been making a fantastic Red Beans and Rice dinner for a few weeks now. I wonder how that would be on a pizza? I mentioned it to Theresa and she was all for it. What would a Red Beans and Rice pizza look like? Let's find out! 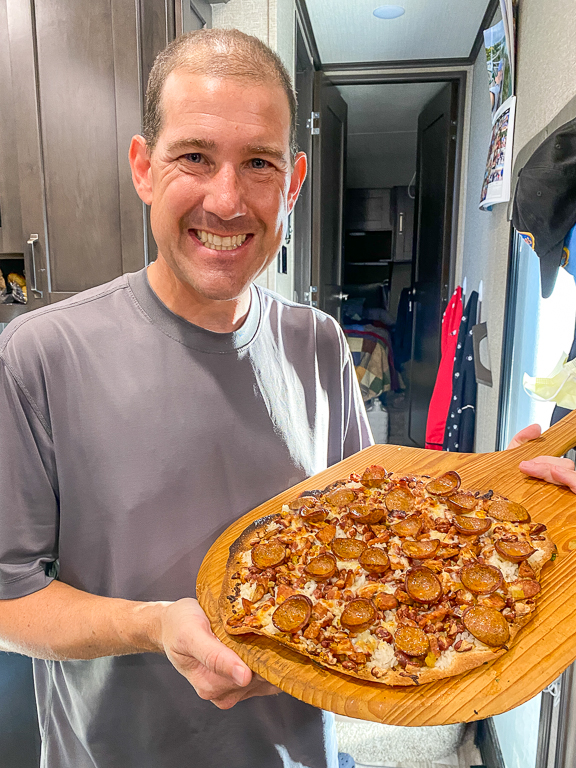 Theresa had made a batch of Red Beans earlier in the week, and usually she makes enough for leftovers. 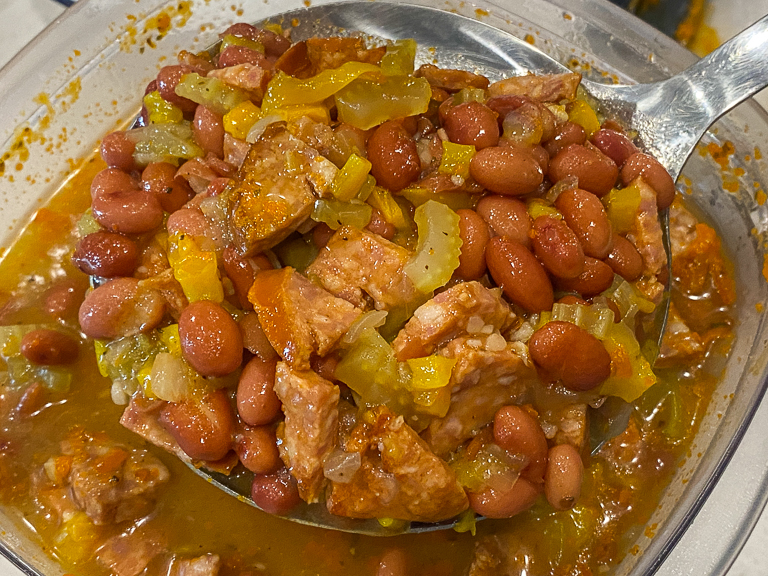 An interesting mix of toppings for tonight. 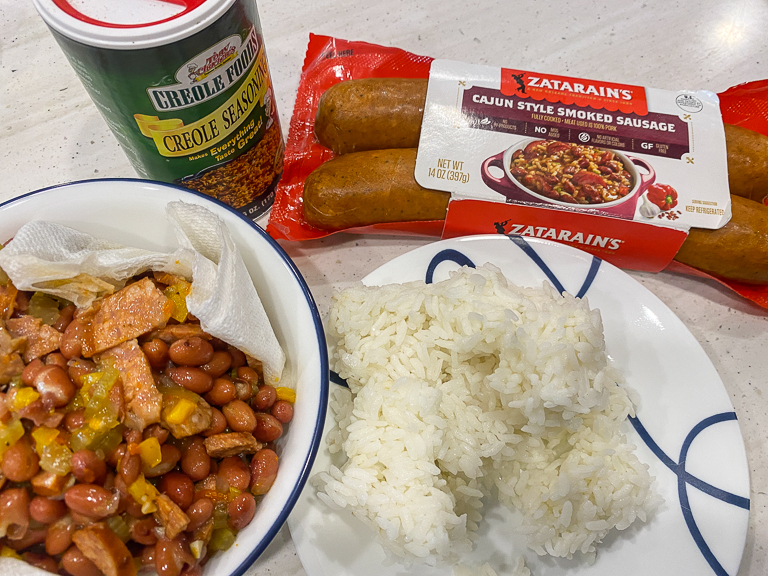 Because this is a thin crust pizza, I wanted to make sure the red bean mixture wasn't going to make the dough soggy. I went through quite a few paper towels before I was satisfied that the mixture was dry enough. 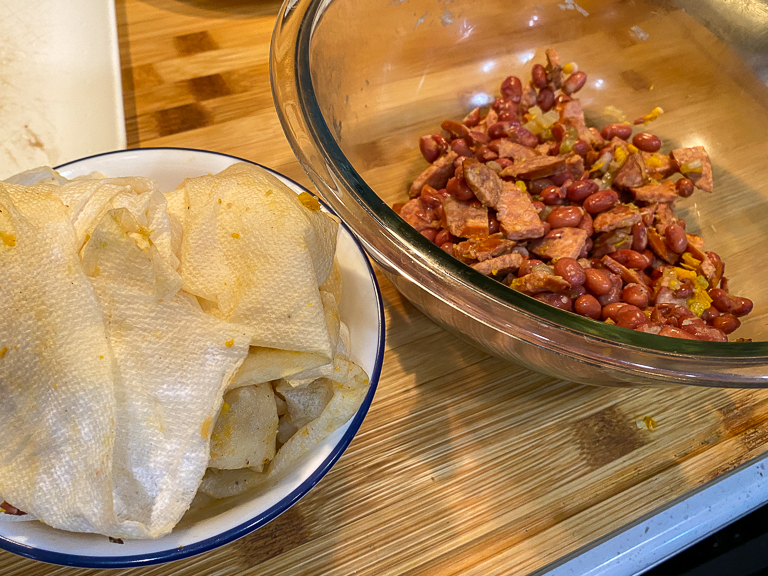 Well this is a first. I've used quite a few different things as a base for my pizza, but rice is a new one. Not a solid layer. Just a generous sprinkling. 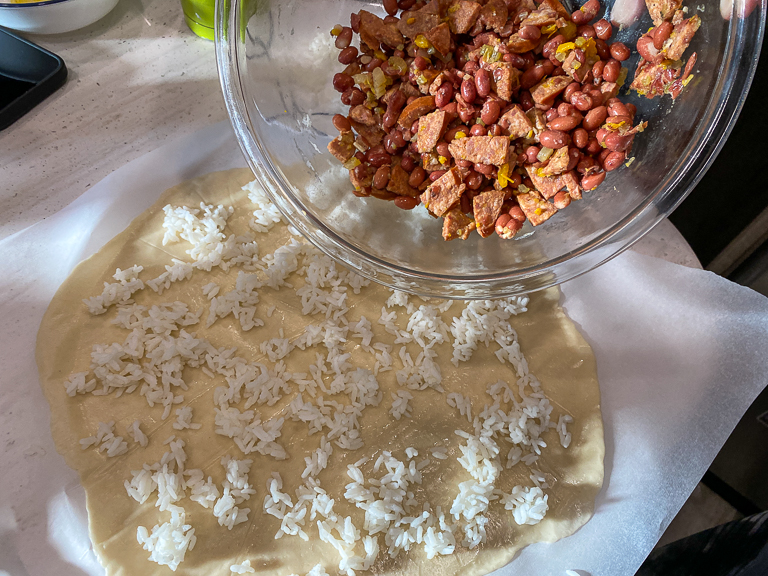 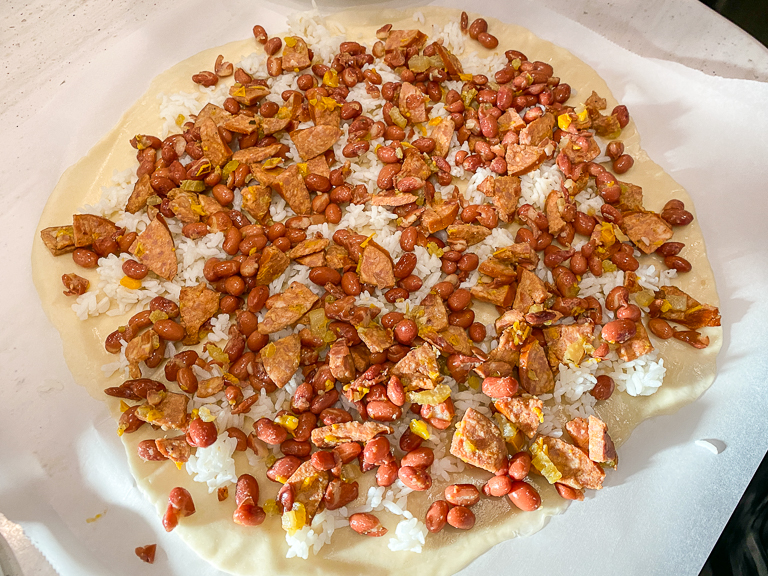 It doesn't quite have that "pizza" look to it yet, so I added some shredded mozzarella cheese, along with sliced cajun sausage. Add a few dashes of creole seasoning and it's ready to go. 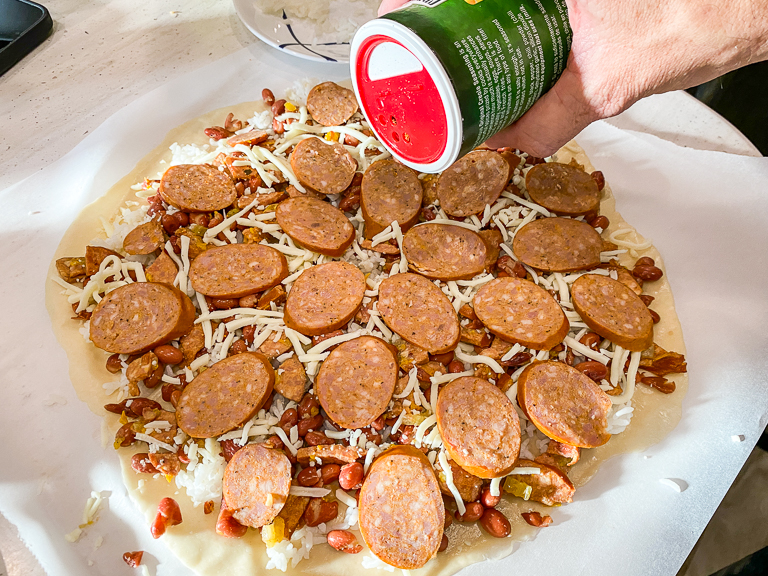 The toppings are a little thick on this one, so it's going to need to bake for a few minutes longer. 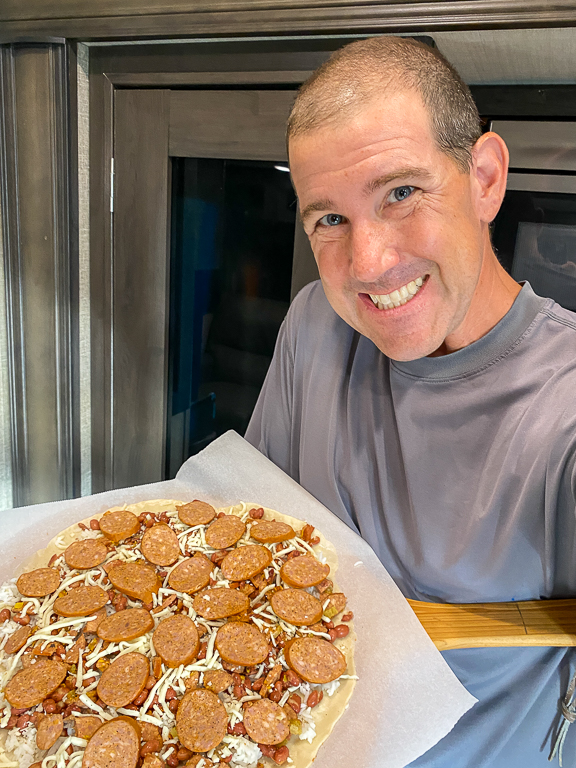 After 14 minutes in the oven, moving between the bottom rack (for a crispier crust) to the top rack (to get some good heat on the toppings and brown the cheese) this pizza is done! 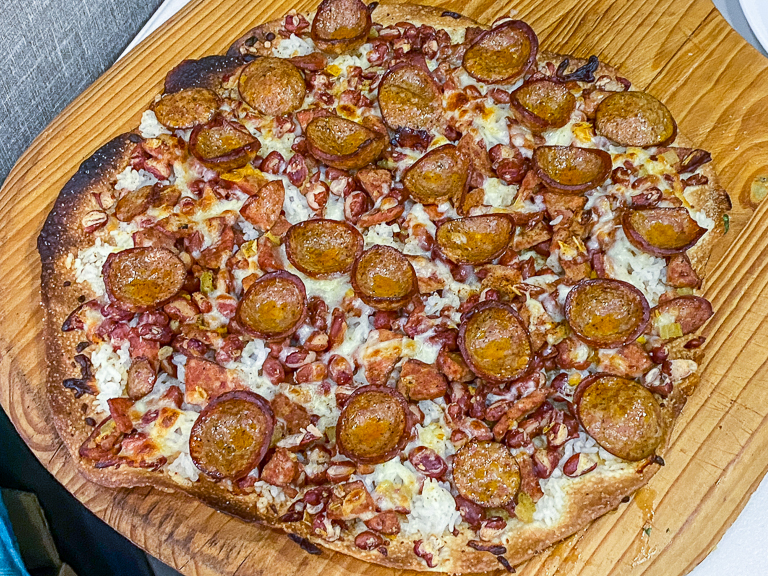 And there's only one more thing I would add to make it better, but that'll be for each person to add themselves. Tabasco is from Louisiana too! 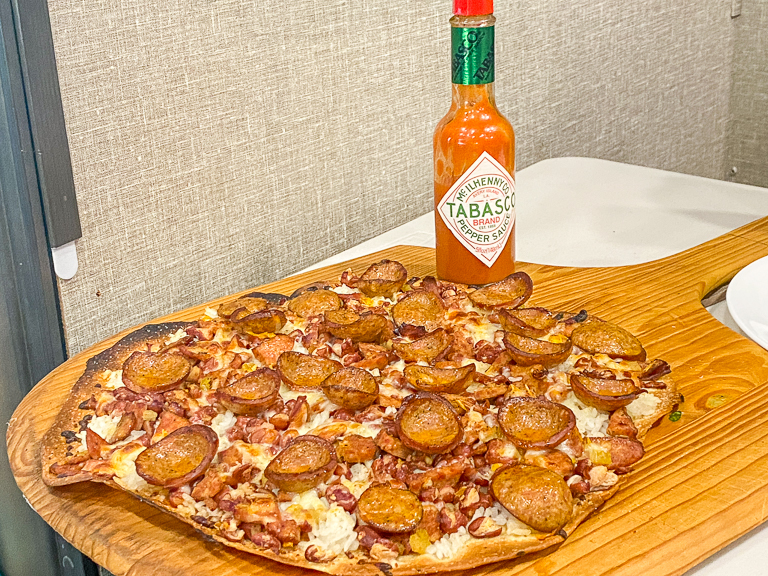 So, does Red Beans and Rice work on a pizza? Actually yes, it totally does. We know that the flavors already come together quite nicely. Because it's a thin crust pizza it's almost like having those same flavors on a crispy cracker. I think this works really well as a thin crust pizza, and maybe wouldn't do so well with a thicker crust. 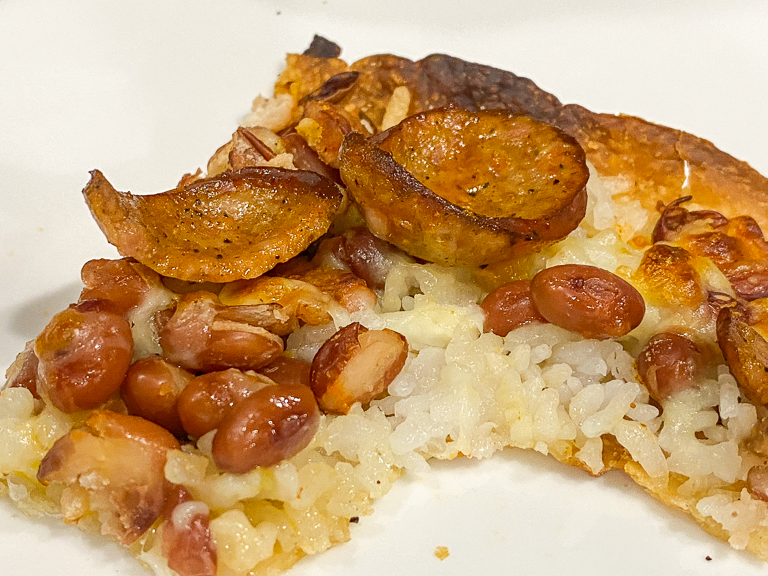 Theresa - That's a good pizza. It's definitely in my top 10. 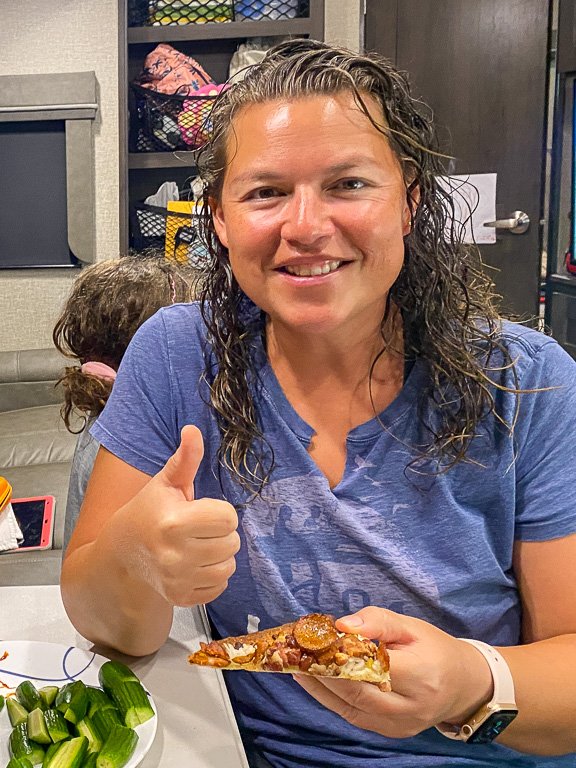 Alli tried a bite and loved it too. 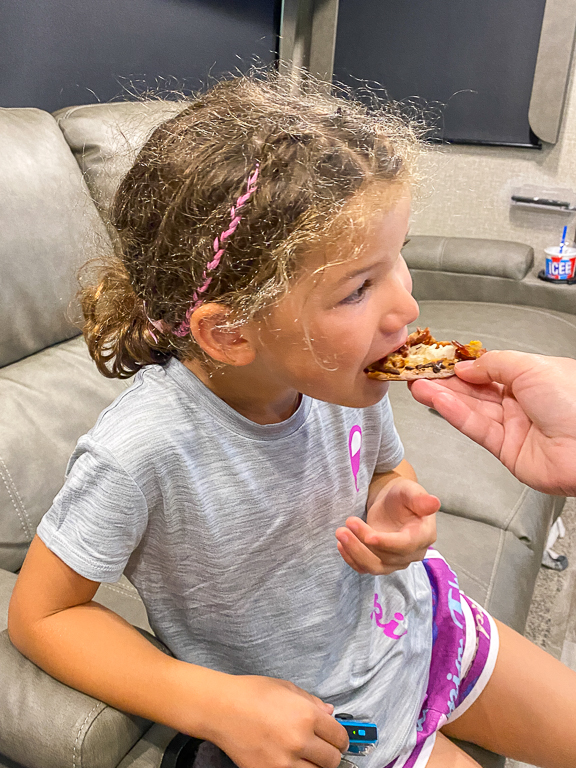 Along with the Red Beans and Rice pizza, everyone gets to make their own. Tonight the kids are splitting a pizza, with Ian having pepperoni on one side, and Alli with pepperoni, mushrooms, and olives on the other. 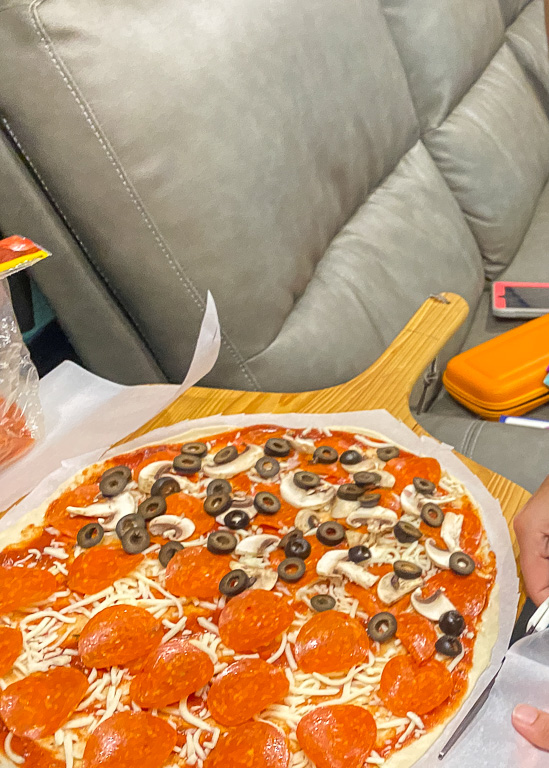 They do love pizza night. 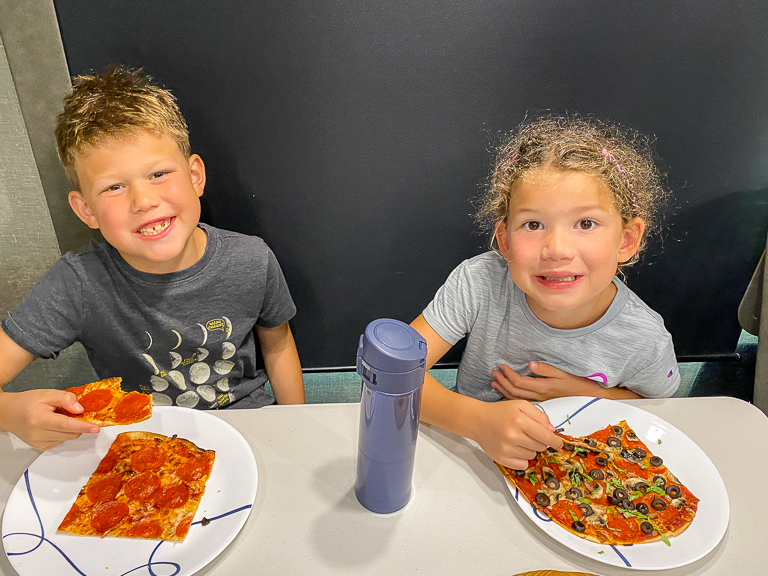 Oh, and once Alli saw us using it, Alli asked to have hers topped with basil too. 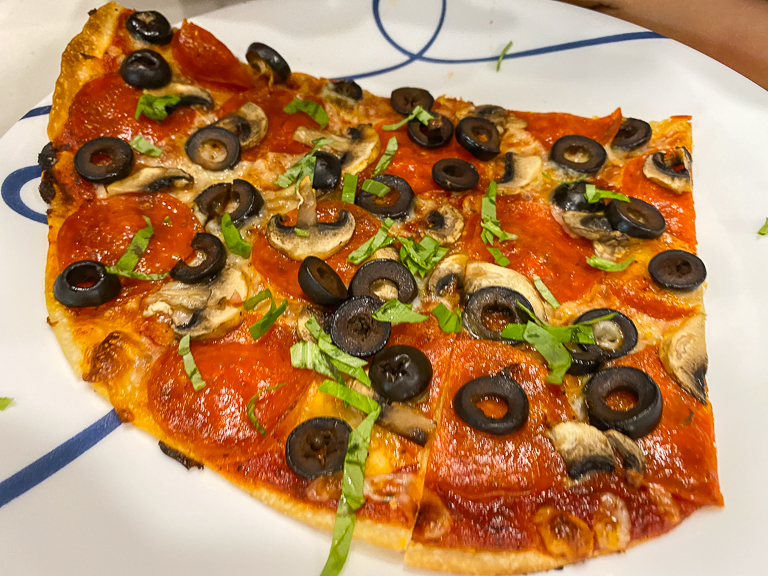 Tonight, Theresa and I both made changes to the usual Therizza pizza ingredients. She added mushrooms and olives to hers. I made a Therizza pizza and added sweet pineapples and pepperoni. 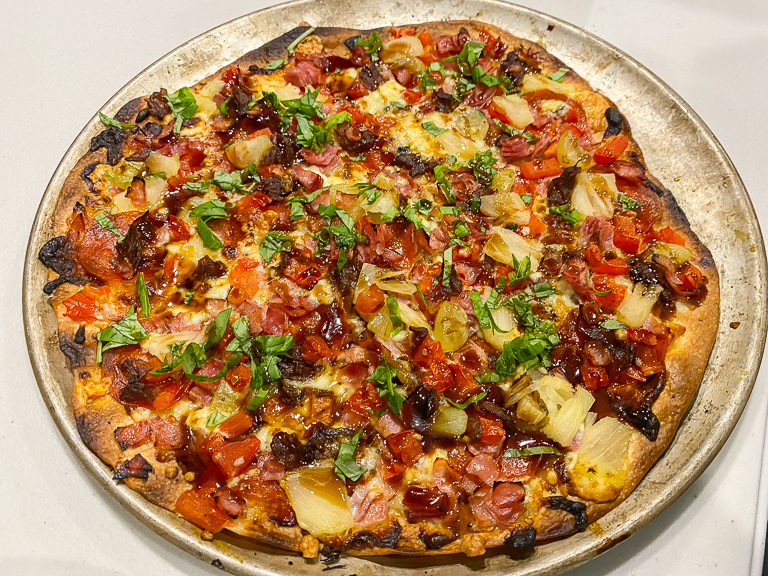 My plate tonight is looking good. The additions to the Therizza were tasty too. 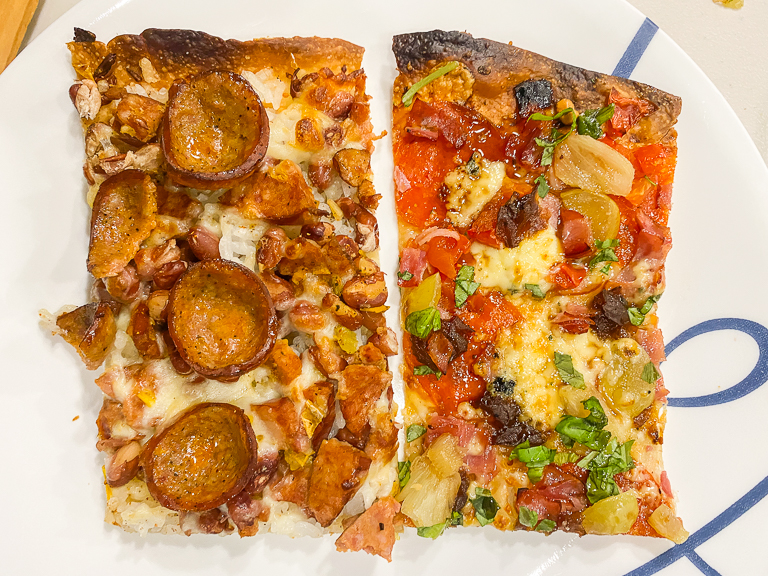 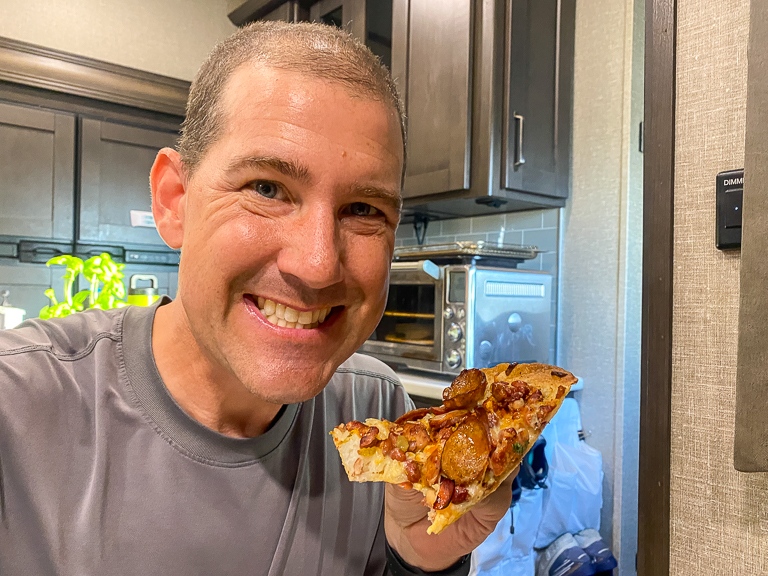