This is it! Our very last Disney visit in Florida before we hit the road. It's Friday, and we've been lucky this week to get reservations for Epcot, Hollywood Studios, and the Magic Kingdom. There's just one park left. Animal Kingdom! At 4:15pm we were parked and headed in. 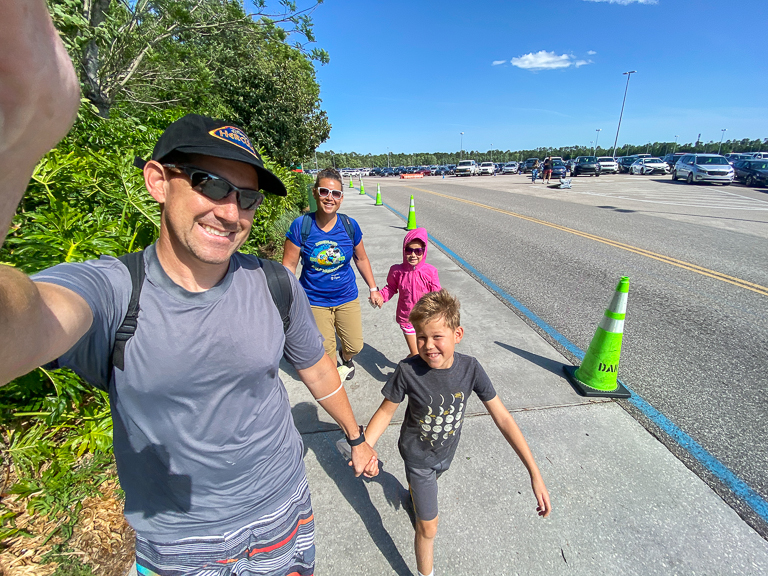 Looks like enough fruit and veggies for a large party tray right? Nope! That's enough for Theresa and the kids to snack on throughout the day. 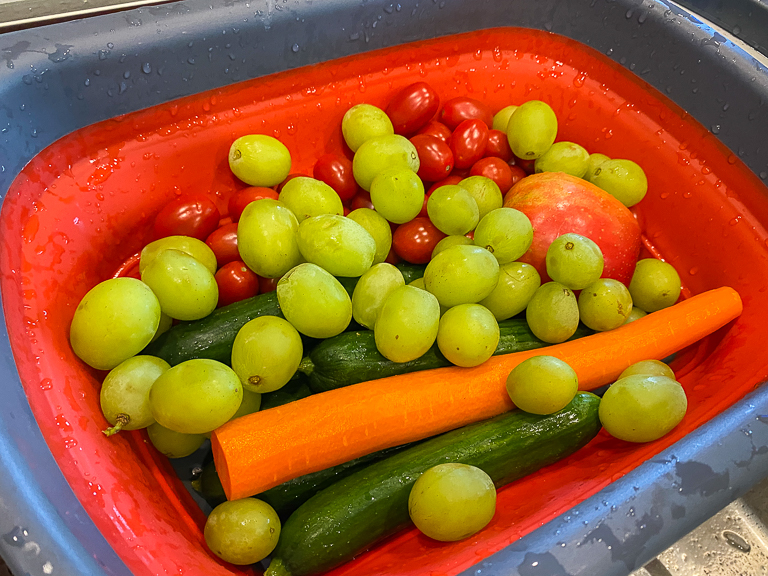 As we walked in, Alli saw that there's a new Disney movie coming out about Polar Bears. She loves her stuffed polar bear that a friend gave her, and is looking forward to this new film. 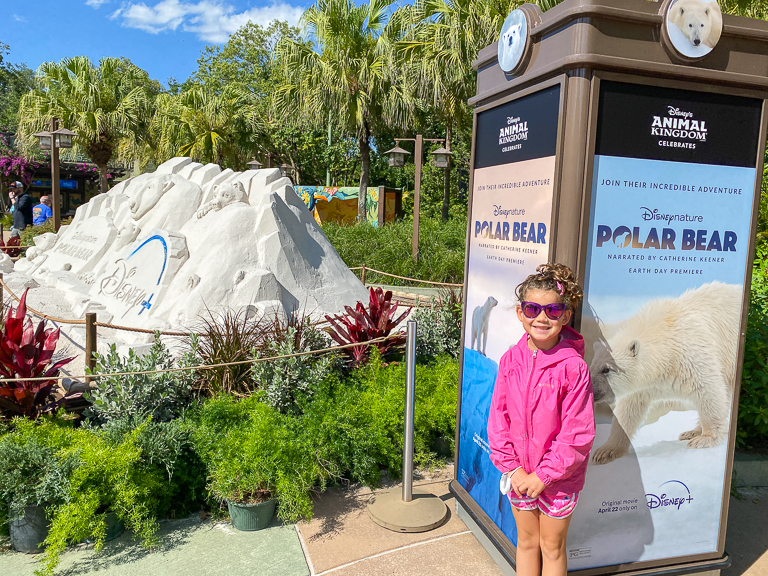 And there's even a giant sandcastle! Theresa told Ian that she'd heard of a class you can take where they teach you to build castles like this. He asked how much it costs and if we could do it! Maybe one day on our adventures buddy. You never know. 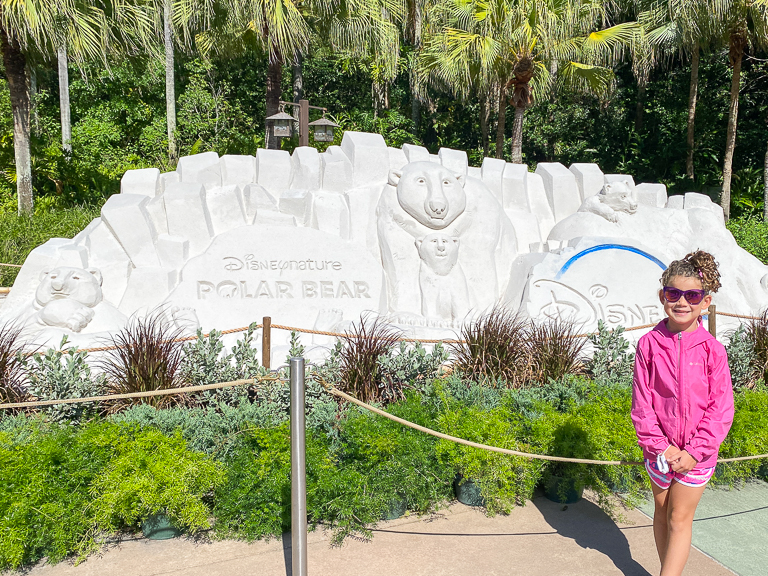 Let's do a family photo. The Wilderness must be explored! Caw, Caw! Rawr! 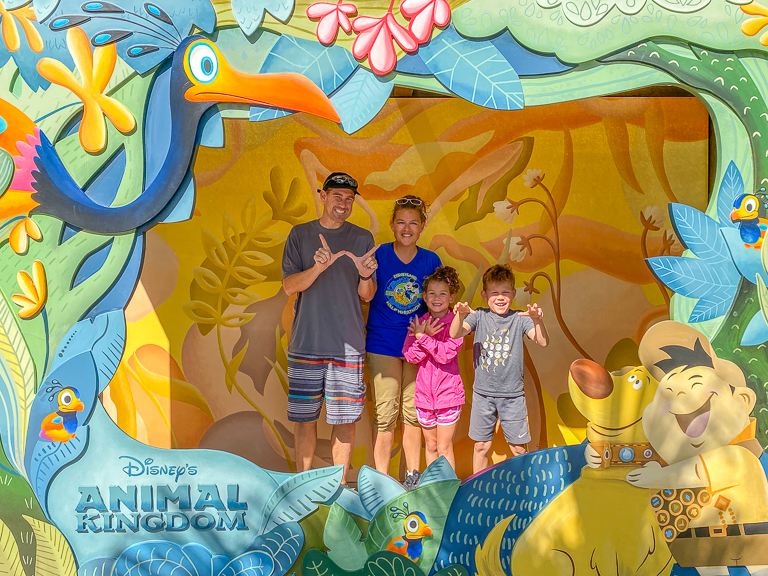 Once again, today we're doing focus rides. It's our last Disney Day so we're going to ride only what we want. The kids really wished that Expedition Everest was back from refurbishment, but we'll go on Dinosaur instead. It's a wild ride with flaming meteors and scary dinosaurs, but they still like it. 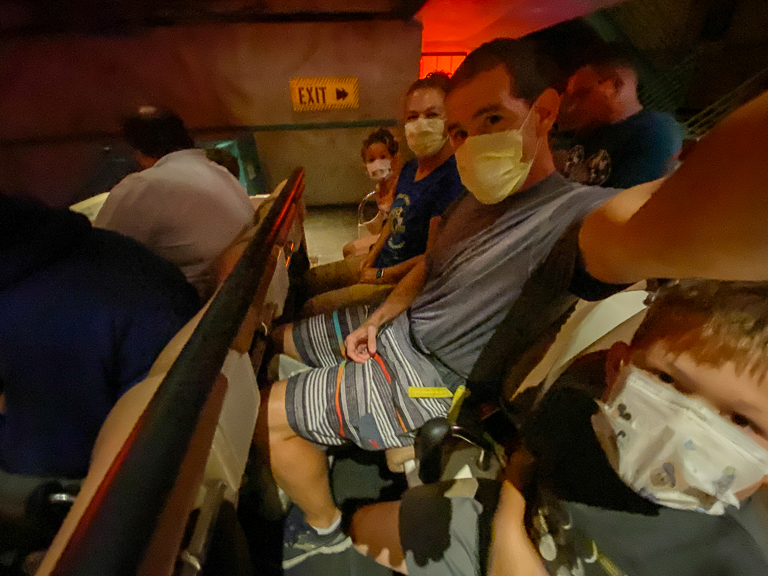 Here's a ride that's been down for refurbishment but it back up and running again. The Kali River Rapids is a spinning raft ride that just might get us soaked. Ian really really wanted to ride it. Alli, not so much, but she went along with it. You'll notice that there's only one parent on the raft with the two kids. 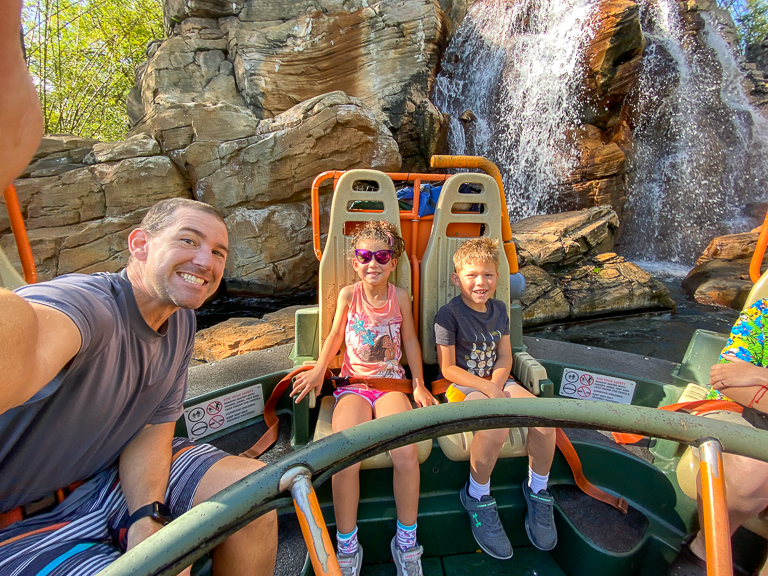 Because Theresa decided that her best option would be to watch us from the bridge, instead of going on the ride with us. 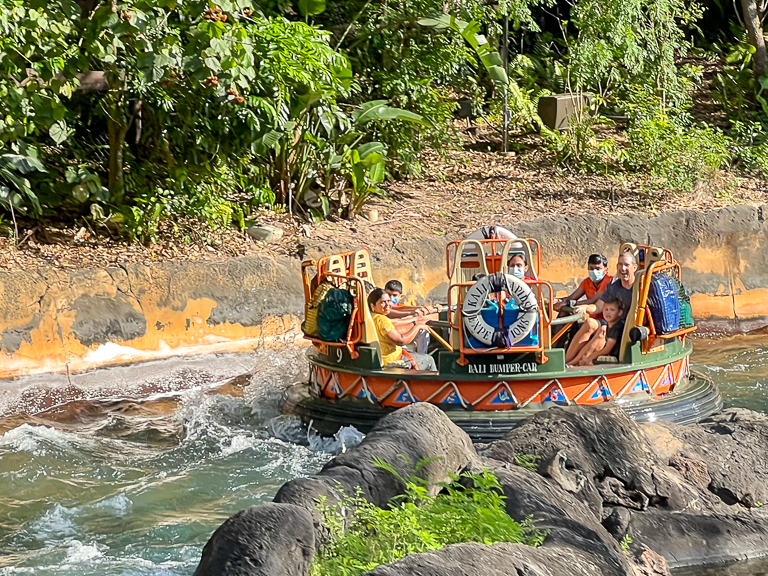 I wonder why she opted to sit out?
I might have been the unlucky one on the boat. A wall of water came crashing down over my entire left side, getting me soaked from head to toe. 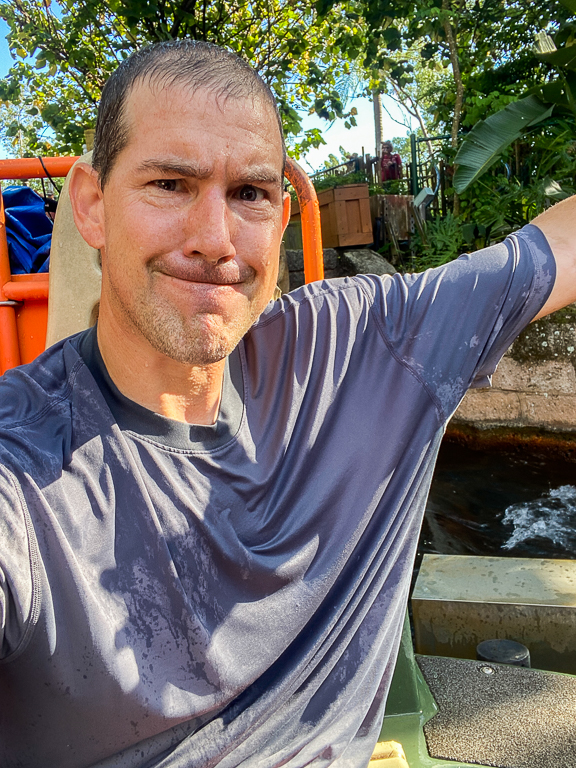 All in good fun though. Luckily my clothes are dry-fit and will be okay before too long. 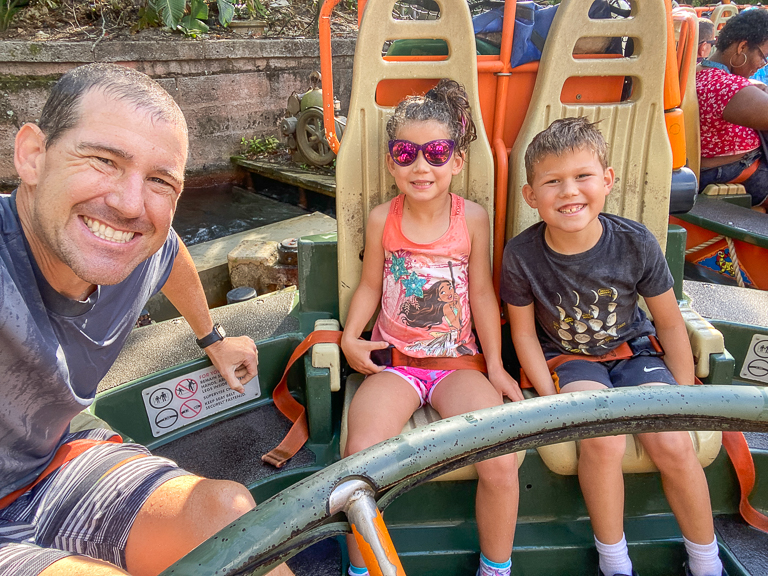 And speaking of long, why does this ride feel so incomplete. I've been on it before, so I knew what to expect, but the other people on the raft echoed my feelings. "That was it? It's over already?"
Compared to the Grizzly River Run in Disney's California Adventure, the Kali River Rapids covers more square feet, but the track length, by my unofficial estimate, is 1800 feet versus 2200 feet. The ride time is 5:00 minutes on Kali versus 7:20 minutes on Grizzly. Grizzly just has more twists, turns, and drops, making it a much more complete ride. I'm glad this was only a 5 minute wait to ride.

Since we've gotten treats in all the other parks, we have to get one here too. I don't know that the Animal Kingdom is known for any specific treats, but the kids have been wanting a frozen lemonade for a while. And not just any frozen lemonade. The Pink Lemonade Strawberry. You can find the regular yellow ones all over the park, but we had to search out to find this one specifically. 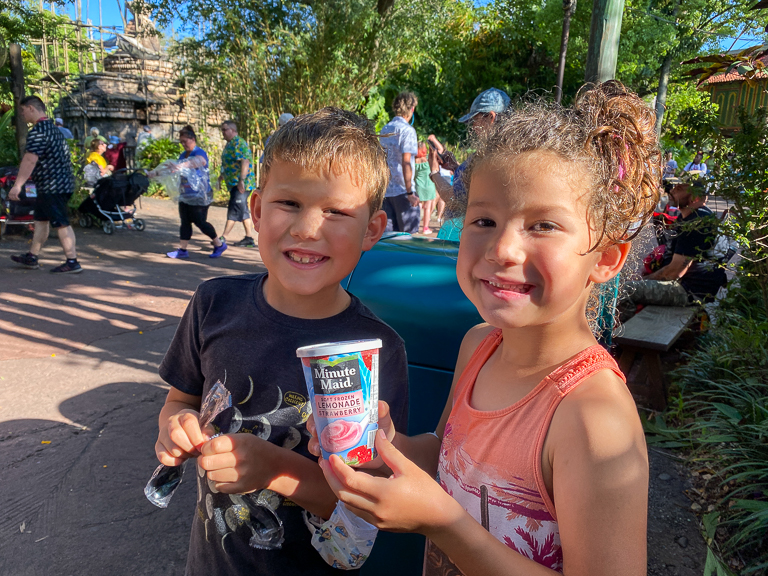 Dinner was a tasty meal of Cumin Chicken with veggies over rice, eaten by the river beside the Tree of Life. 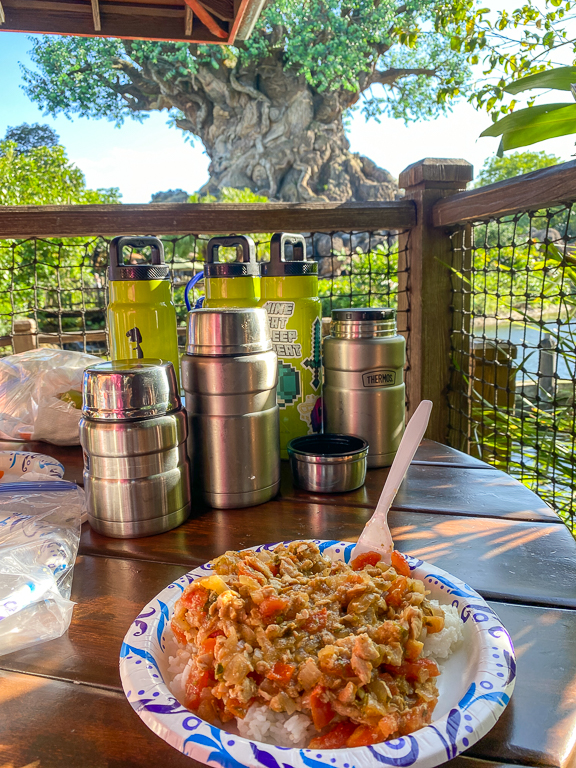 The kids ate up their warm dinner while wearing jackets, because their wet clothes were so chilly. I suggested they not eat the frozen lemonade, but that suggestion was obviously not taken to heart. 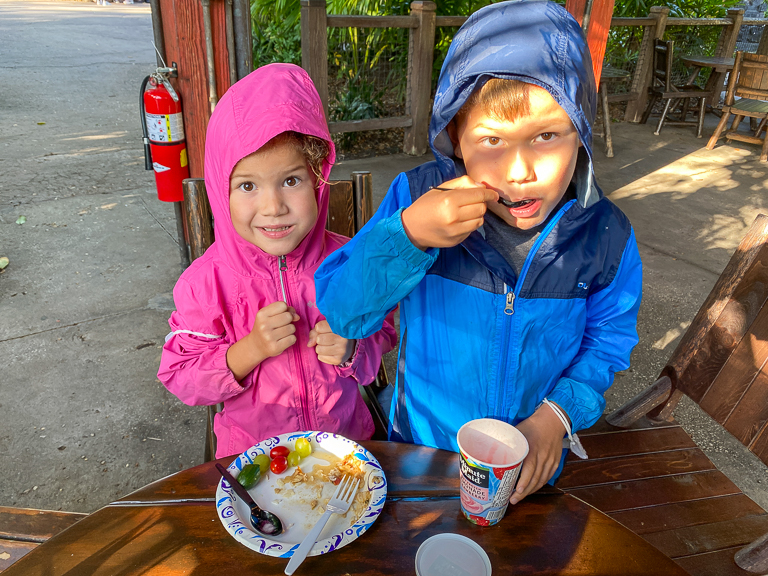 One of Theresa's favorite rides here is the Kilimanjaro Safaris. I'm with her. It's a great ride. We drove around the reserve, looking at all the different animals. 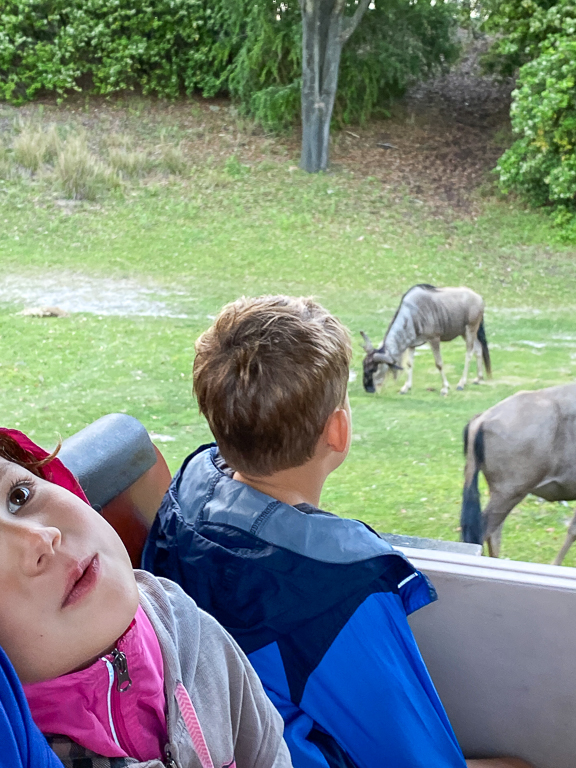 Even being lucky enough to spot a lion. 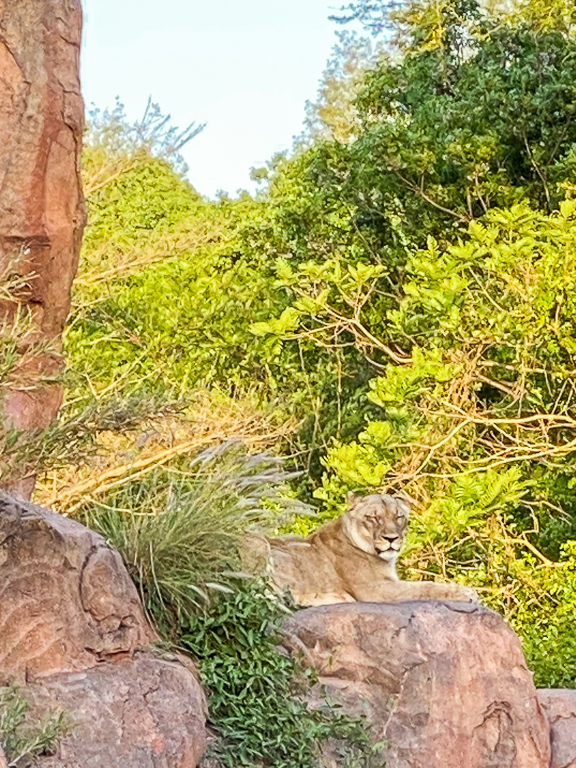 To end our night, we're off to the World of Pandora. There's a ride that I've never been on, and the kids might have been on years ago but don't remember. Only Theresa recalls going on it. It's the Navi River Journey! The line was showing an unfortunate 60 minute wait. It's 7:20pm and the park closes at 8:30 tonight. I hope it doesn't take that long because we really want to make it to another ride for our last one.
The queue was long, and unfortunately pretty boring. You walk around a lot of switchbacks, in a big open area, surrounded by other people waiting in line. It's a slow shuffle to get to the front.
And when you finally get to the front, you're loaded onto a tiny 8 seater boat. You float along, just like a lazy river, past peaceful forest scenes from the world of Pandora. Near the end there's a large animatronic, along with some singing. And then you're back at the beginning. The whole thing lasts about 6 minutes and it's the most boring ride you'll go on.
Alli - Why is it such a long line to see this?
I honestly don't know Alli. Ignorance maybe.
Theresa confirmed that she knew it was pretty boring and that there were no thrills, but she didn't want to talk us out of it since we'd never done it. Moving on! 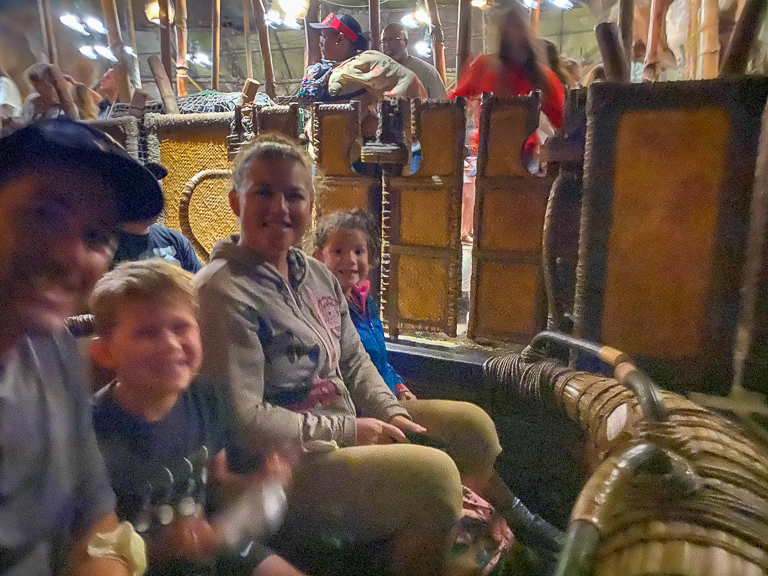 Our eyes were on our watches as we boarded the Na'vi River Journey, making sure that we'd have enough time to get over to the ride we wanted to end our night with. Flight of Passage! Hopping in line with 5 minutes to spare, we made it before the park closed!
It took us only 20 minutes to make it into our boarding groups as we prepared to link up to and fly a Banshee around Pandora. 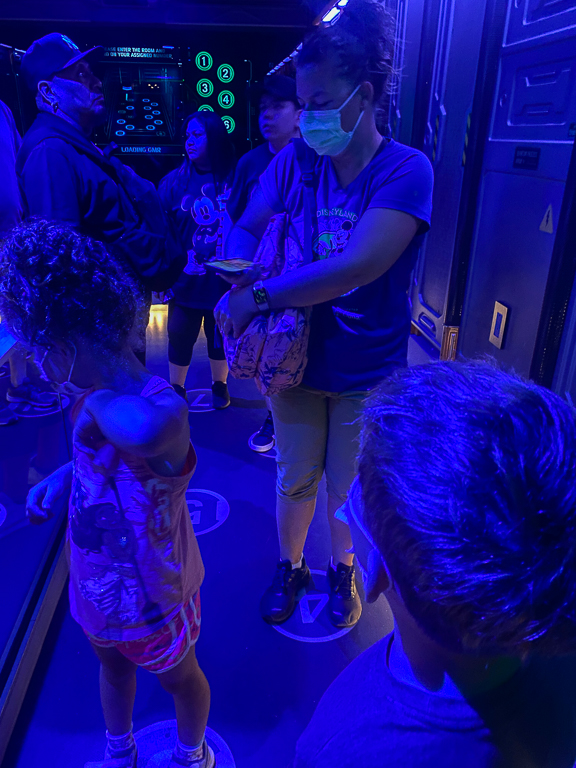 It's a really fun experience with all the smells and water spray. It does a great job immersing you into the world of Pandora and it was a great way to end our night.
Orlando and Disney have been a lot of fun to visit over these past few months. We've had a great time welcoming all sorts of visitors and meeting up with friends. Now it's time to go make some new memories.
As Captain Jack Sparrow would say "Bring me that horizon." 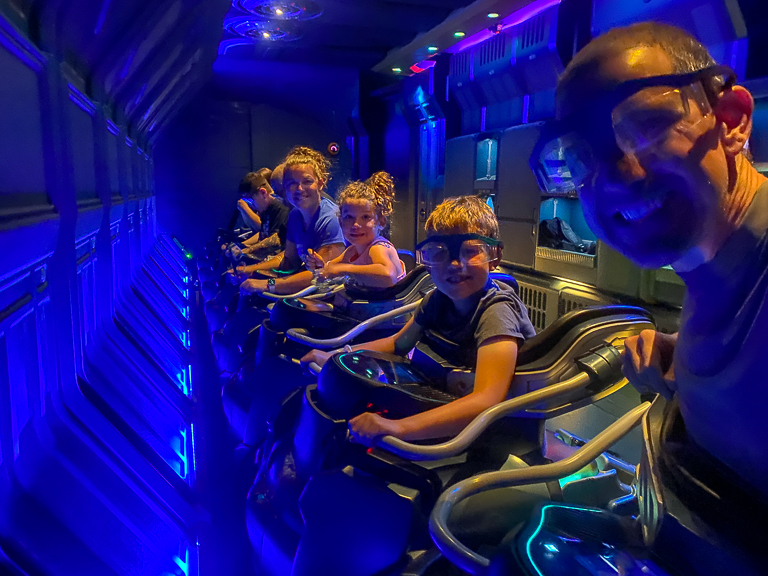