It's another travel day today as we make our way up to Colorado to visit family on our way West. 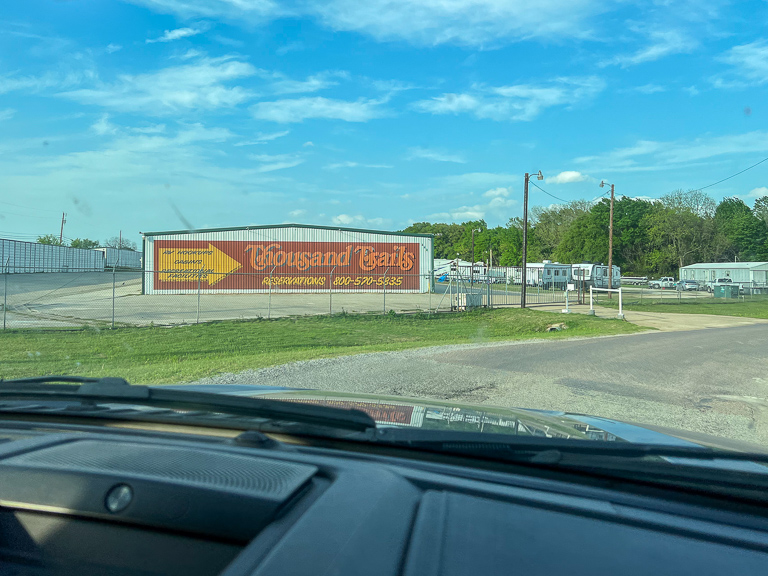 Today's travel day is only a 2:30. We can make it there without even stopping! 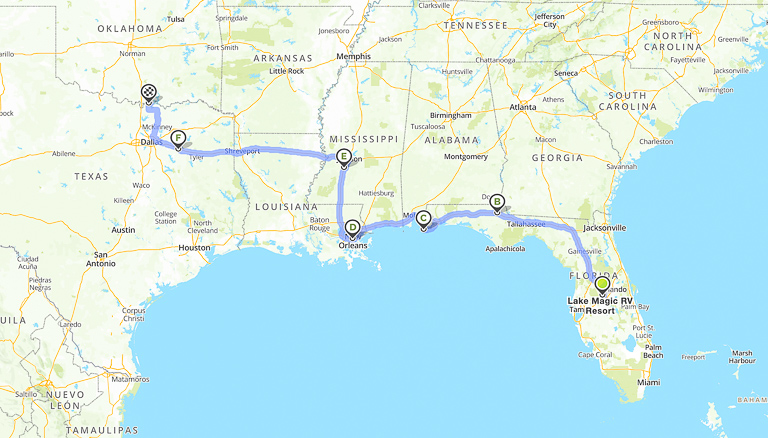 It was an uneventful drive on pretty easy roads. With most Thousand Trails campgrounds, your site is unassigned, so the closer you get there to check-in time the better your choices are. 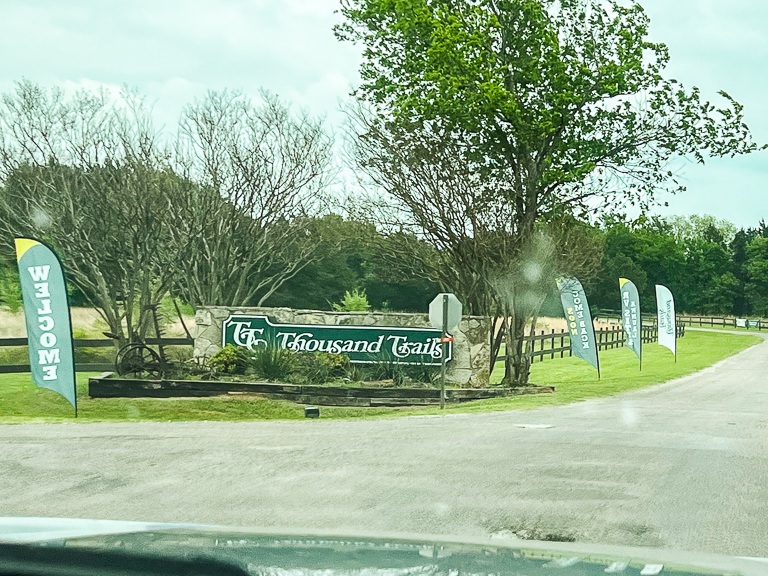 Theresa got us all checked in and got a map of the area. We already looked at Google satellite images to get a feel for the place and an idea of where we think we want to go. 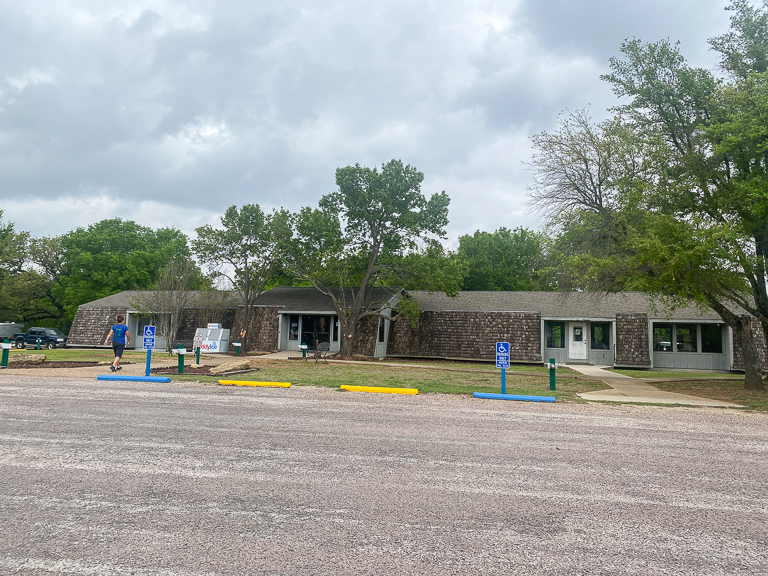 I backed us into a nice site that's close to the amenities. 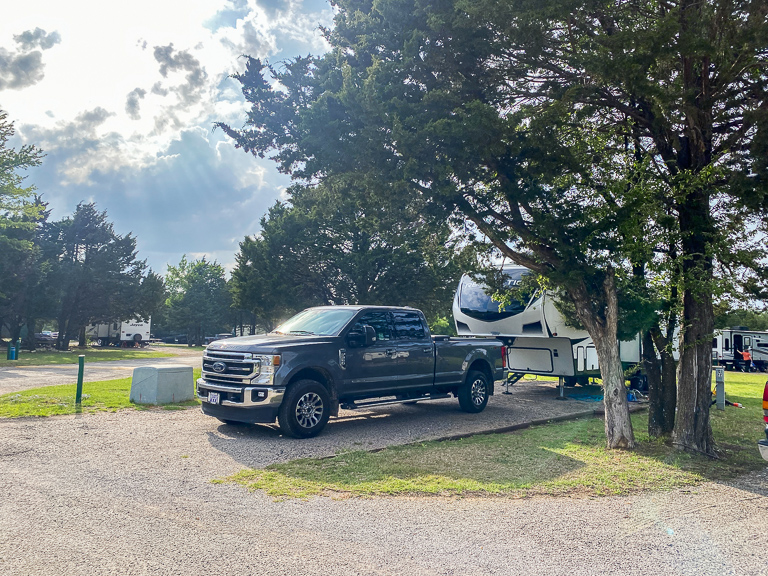 Like the playground! They made friends right away it wasn't long before we had kids at our door at all times of the day asking if Ian and Alli could come out to play. 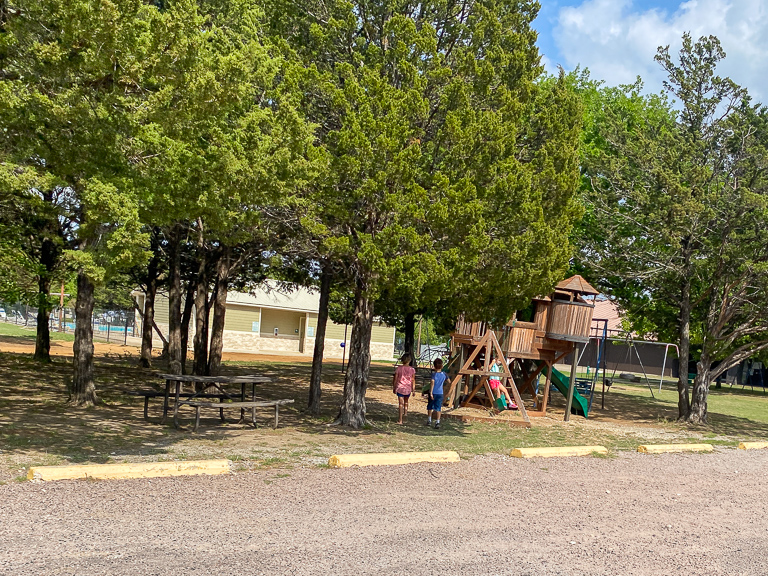 Nice they had a swing nearby for the adults to sit on while the kids ran around. 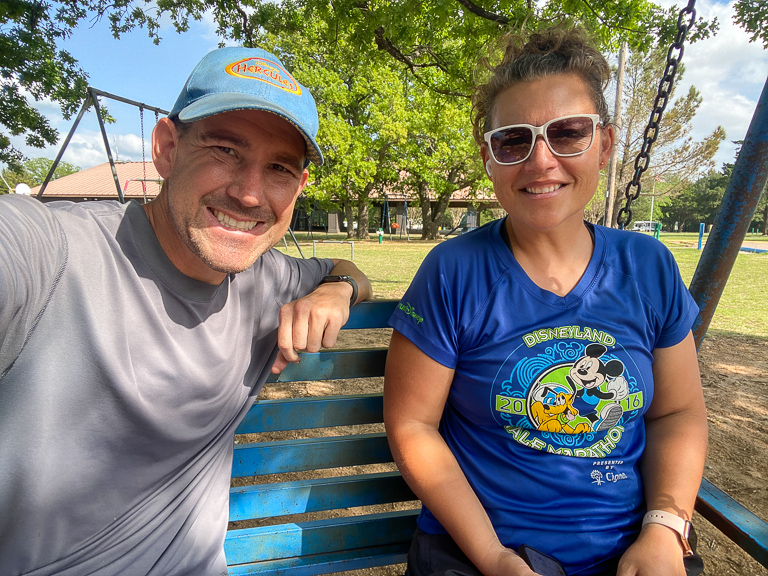 There were two pools around the campsite. The kids got together with friends here and had fun diving for toys. 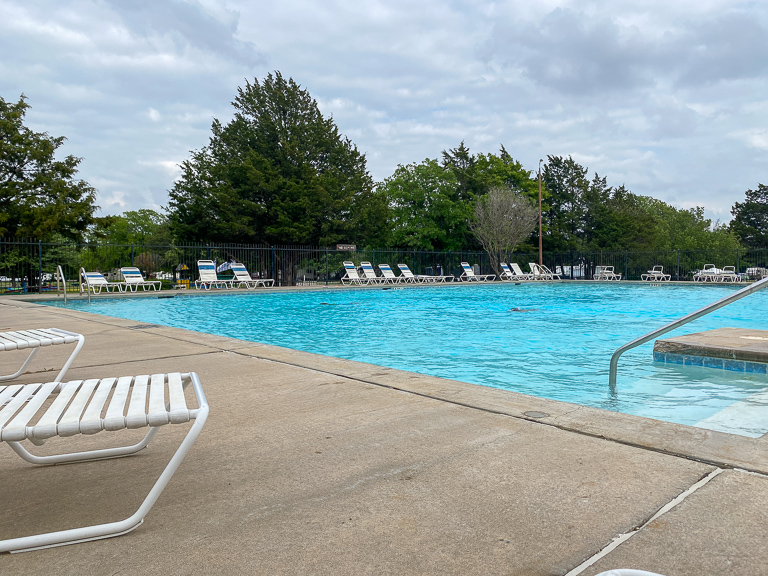 And it's always nice when there's a hot tub! 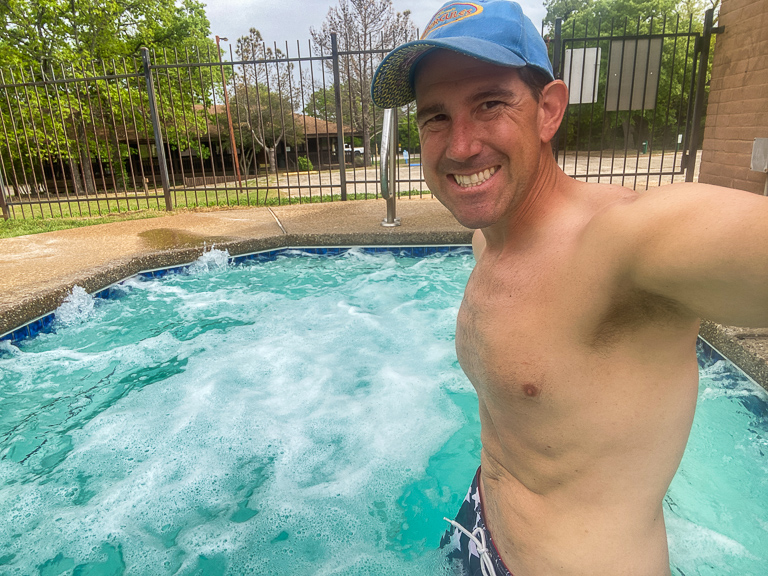 Alli - Daddy, can you take my picture? I'm a ninja.
She did her hair special like that, and would tuck those giant suckers into the neck of her shirt. Then she'd jump, pull them out, and strike a ninja pose. 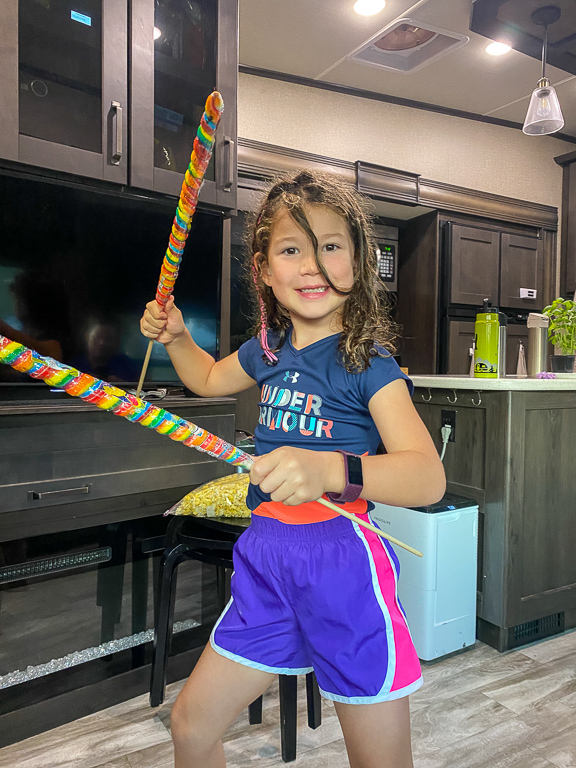 While we're here, we did get out for a little hike. It's the Lake Texoma campground after all, so we should go down to see the lake. 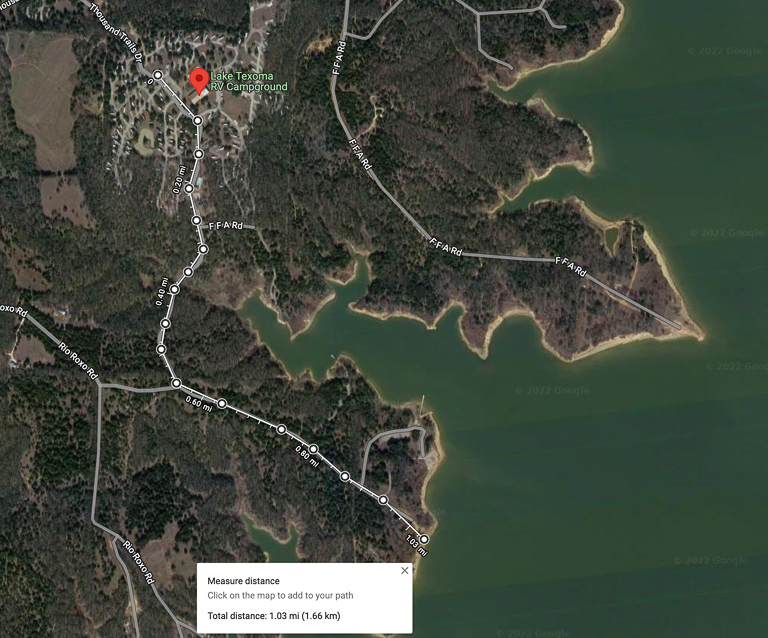 Like many similar towns of conjoined names, Lake Texoma divides Texas and Oklahoma. 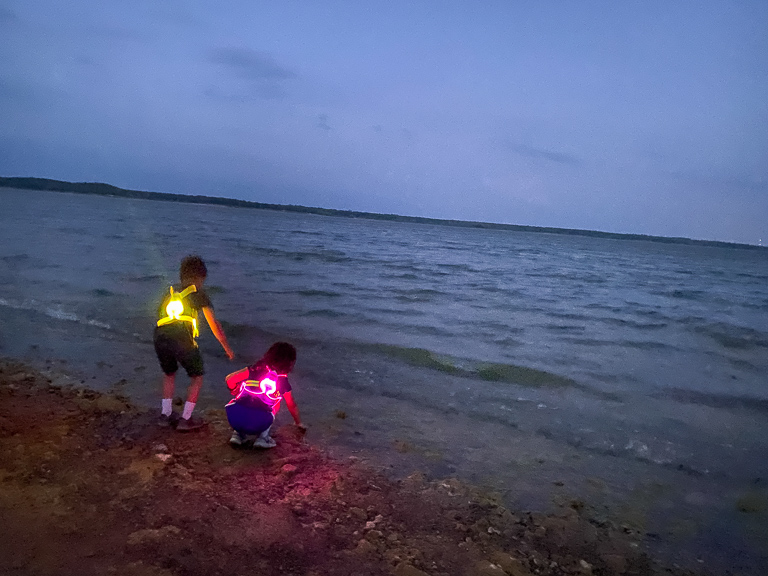 Theresa is getting out the the gym quite a bit, and the nearest one is an hour away. That's usually a little too far, but there's something else special here that we want to go check out. We packed the kids into the car and told them we had a surprise for them.
This shopping center almost looks like one from Southern California! A 99 Ranch Market, but more importantly an 85C Bakery! 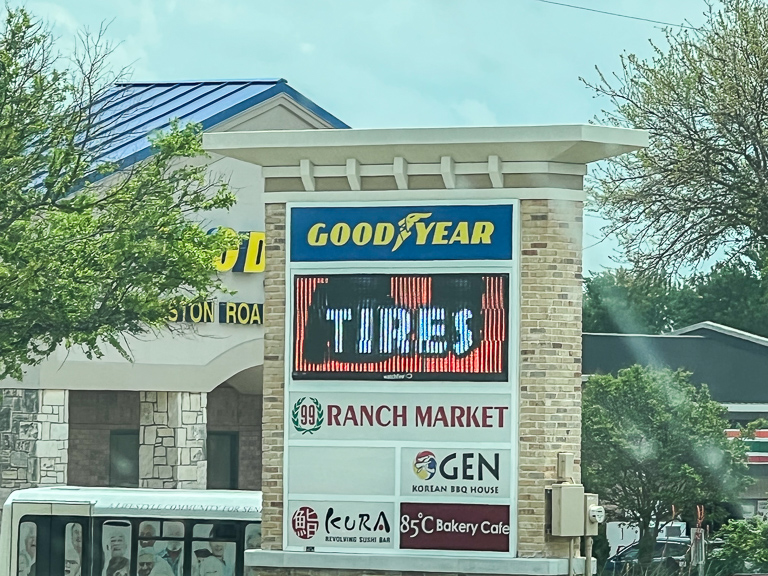 The kids were really excited! I've tried to recreate it when I could, but there real thing is going to win out all the time with them. 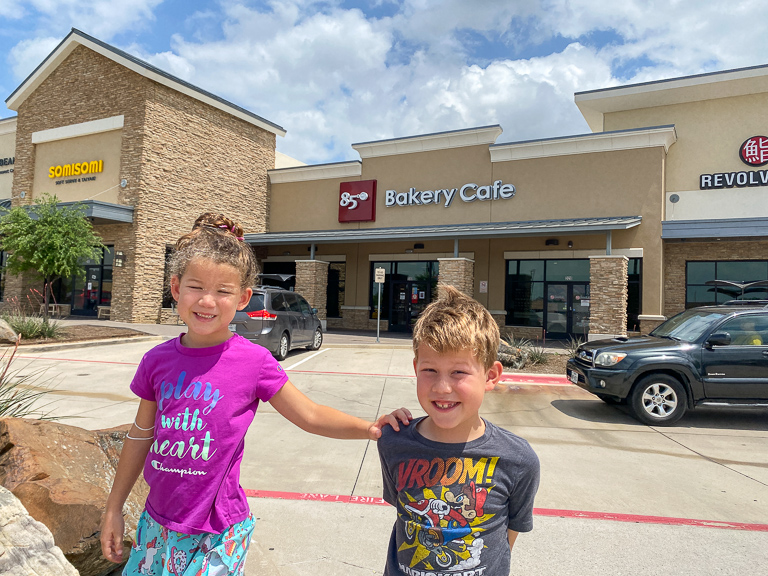 Ian found what he likes. Chocolate buns and a garlic bread. Yum! 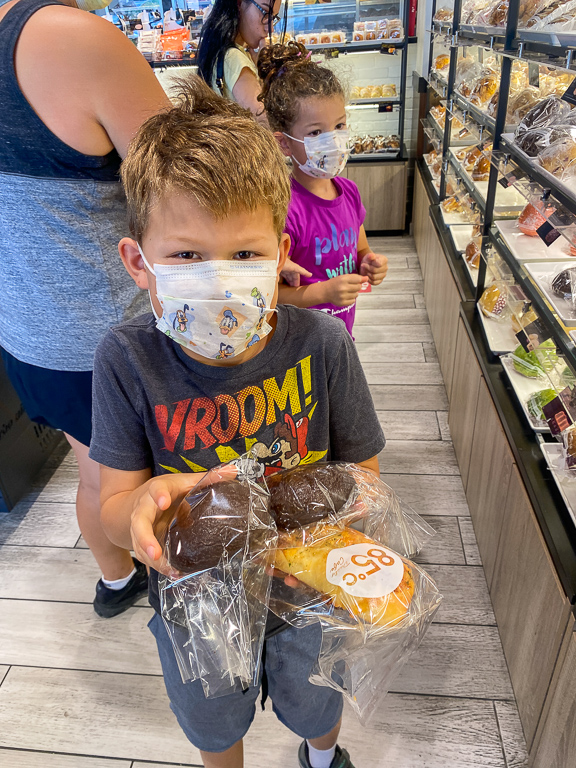 That should last us the day. 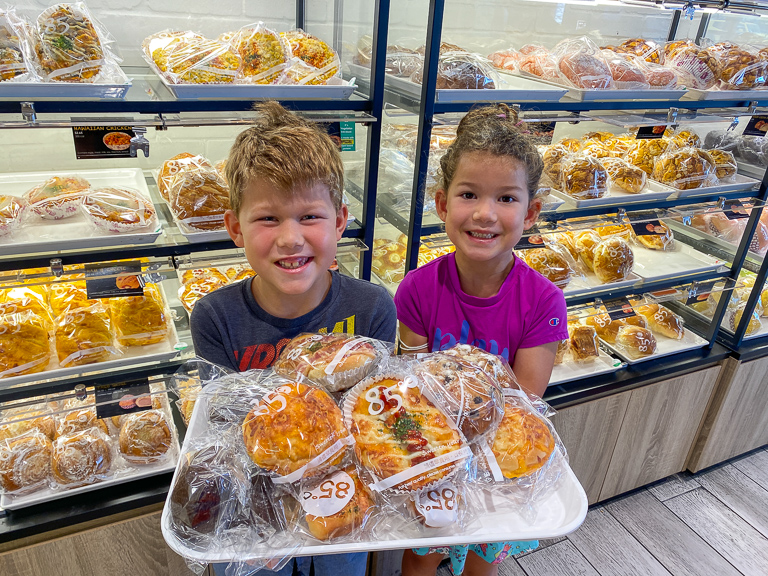 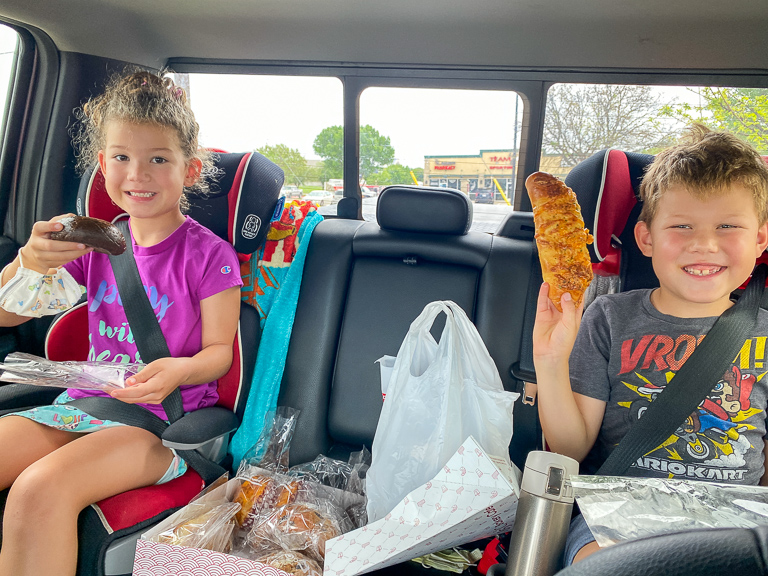 After dropping Theresa off at the gym, the three of us headed over to a nearby park. The Frisco Commons Park has over 1800 5-star reviews and it looks to be well earned. 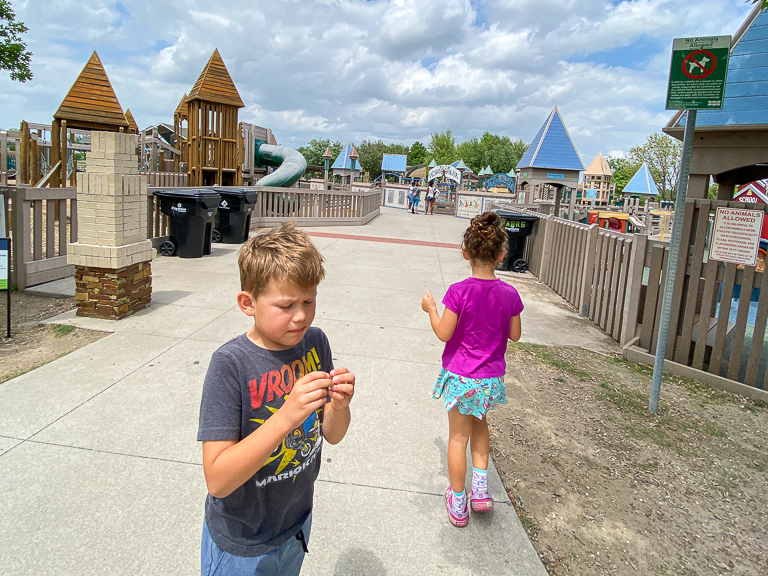 There were so many different playgrounds here to run and climb on. 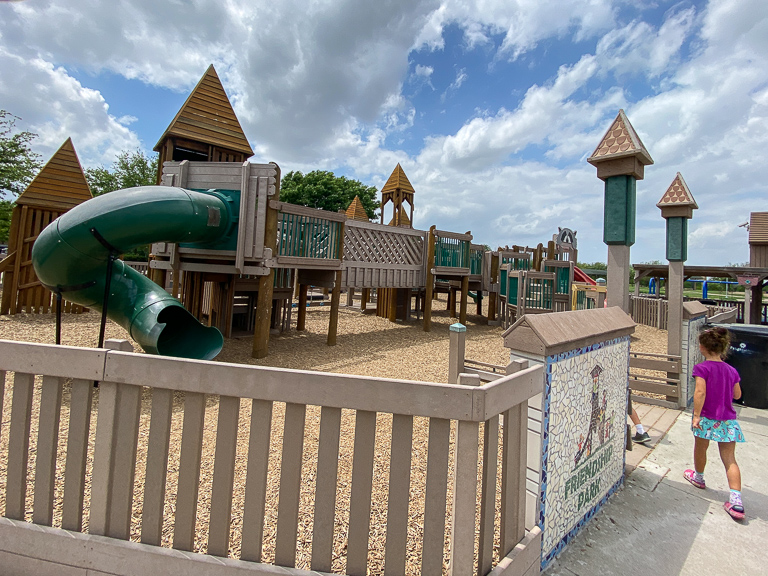 And shade for me to chill while the kids ran around. 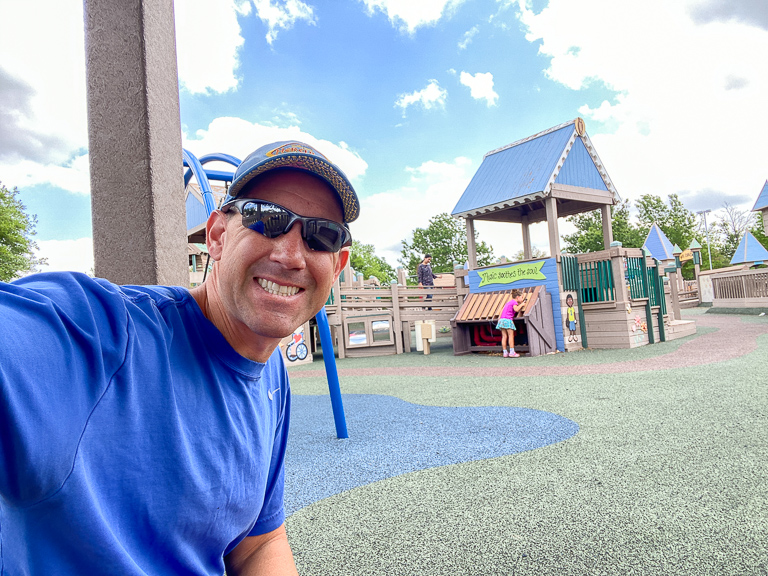 Music soothes the soul. It does indeed. 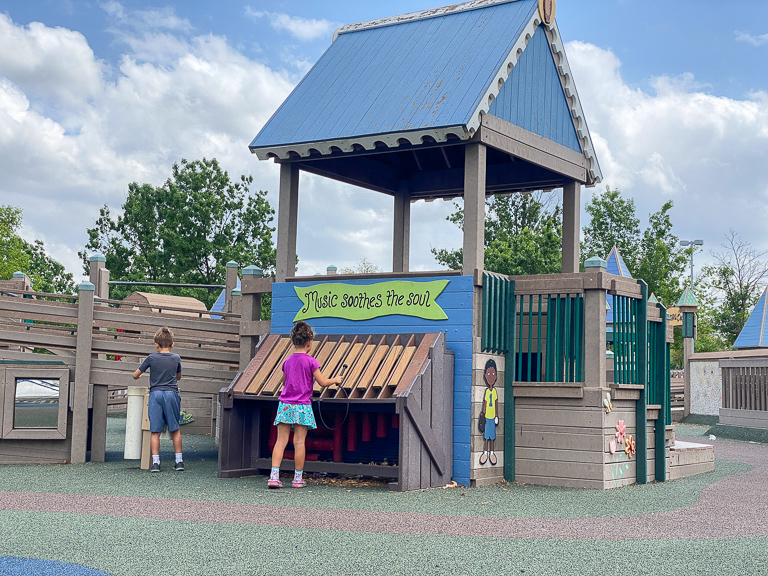 There were fun climbing walls, slides, and spinning things. They were sad when Theresa was finished working out and we had to leave. If we come back through here we've got to take another trip here. That and maybe the National Video Game Museum nearby. 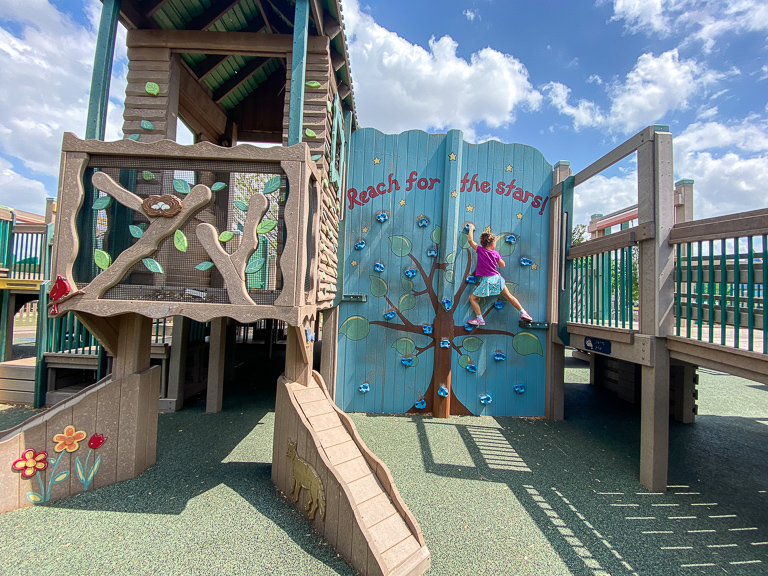 We're not the only ones who love 85C. Theresa's family in Michigan thinks it's fantastic too. She got the great idea to make them a box and mail it to them. Without cardboard box, we were going to make due with a cake box from 85C, stuffed with pastries and wrapped in duct tape. 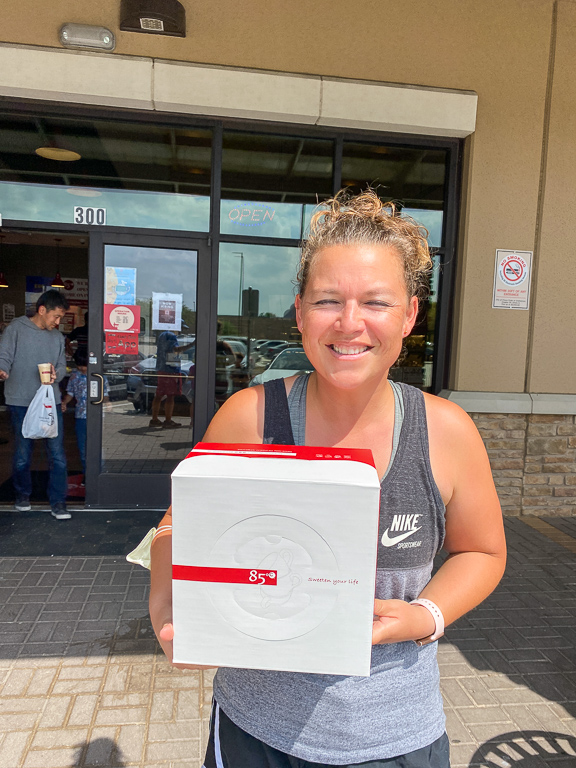 We even got so far as taking it to a grocery store to get it weighed to get an idea of how much it might cost to send. And then we remembered that it was Friday and that UPS doesn't deliver on Saturdays. These would be sitting for a few days. Ah... Well in the end, we decided not to send them. We'll be in California soon enough and can try again then. Even more 85C pastries for us! 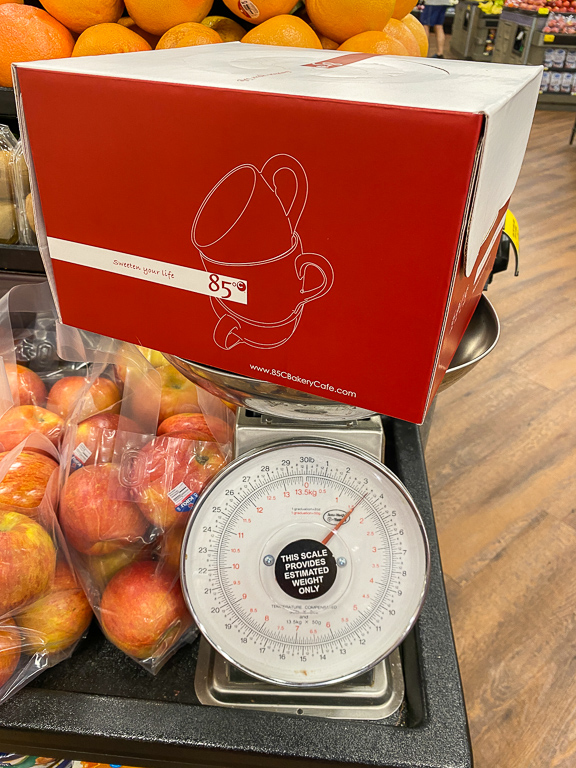 Originally we had planned to be here only a couple days, but Theresa and I have been noticing it's been really windy. We looked at the forecast and saw it's supposed to be 35mph winds on the way up north with gusts hitting 45+ mph! That is not something I want to be driving the RV in on the open freeway.
Theresa extended our stay by a day and we'll try again tomorrow. With the extra time, we decided to explore the mini golf course here. Those flags are flying sideways, so it's plenty windy here too. 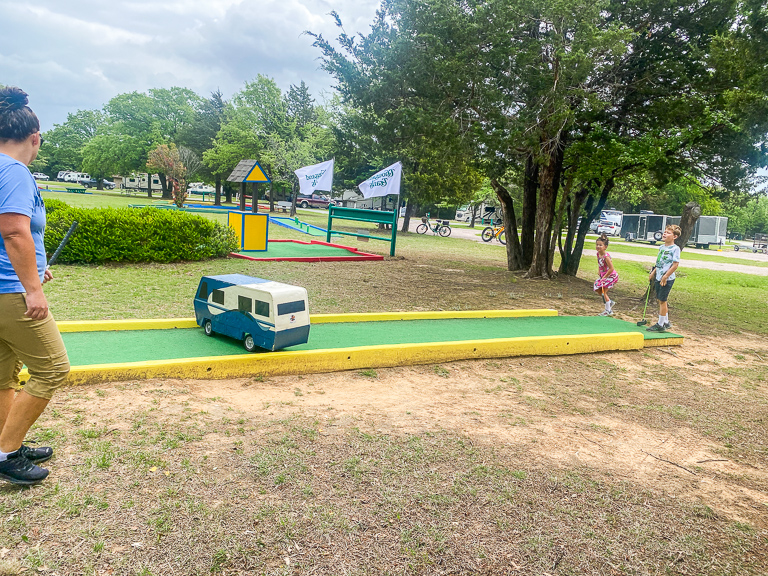 It was a fun course with lots of fun obstacles. 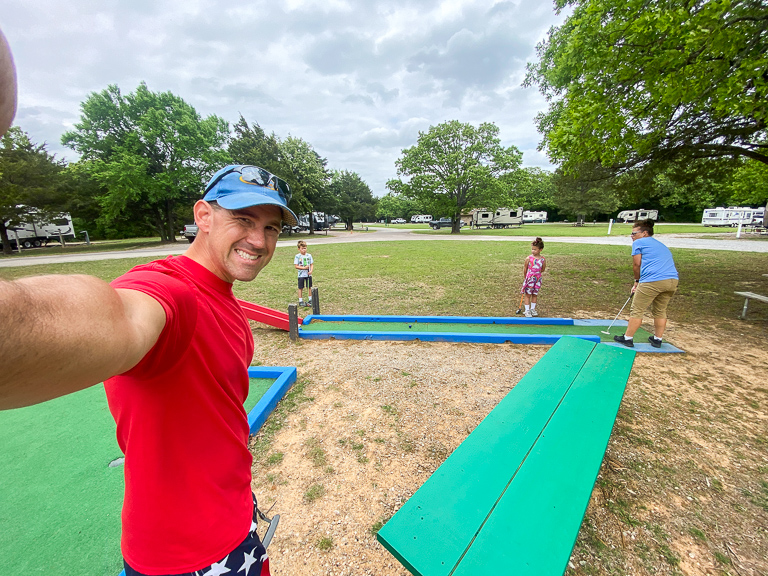 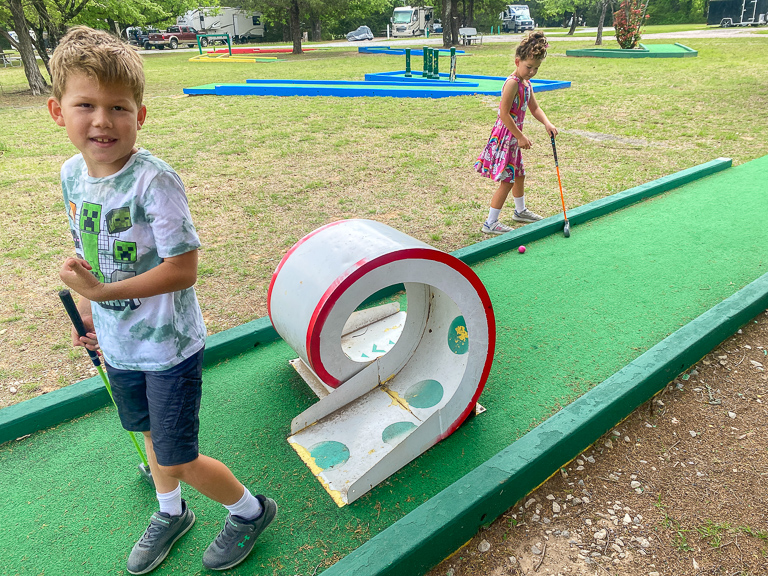 I got a wild hole-in-one here. You had to hit it with some power to get it up the ramp. My ball sped right over the hole, hit the yellow barrier in the back, bounced 6 feet in the air, and swished straight into the hole. 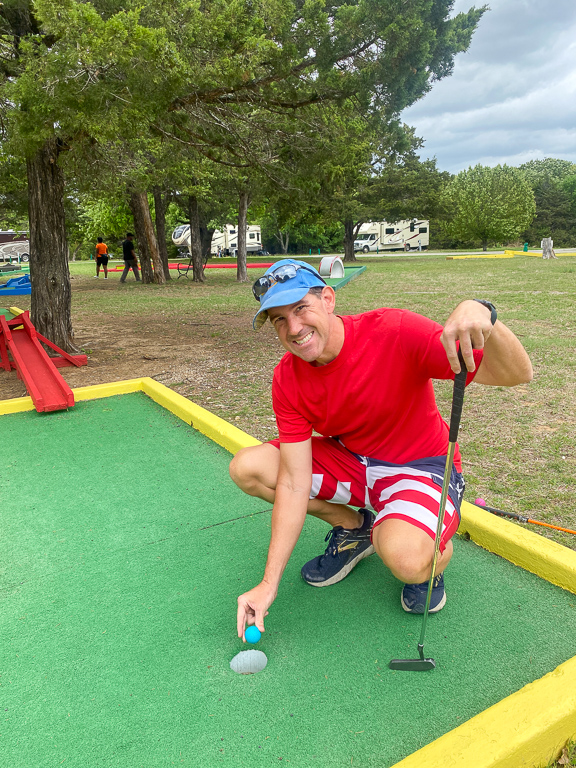 In the end, I won the day, but Alli and Ian are improving. They had a lot of fun. 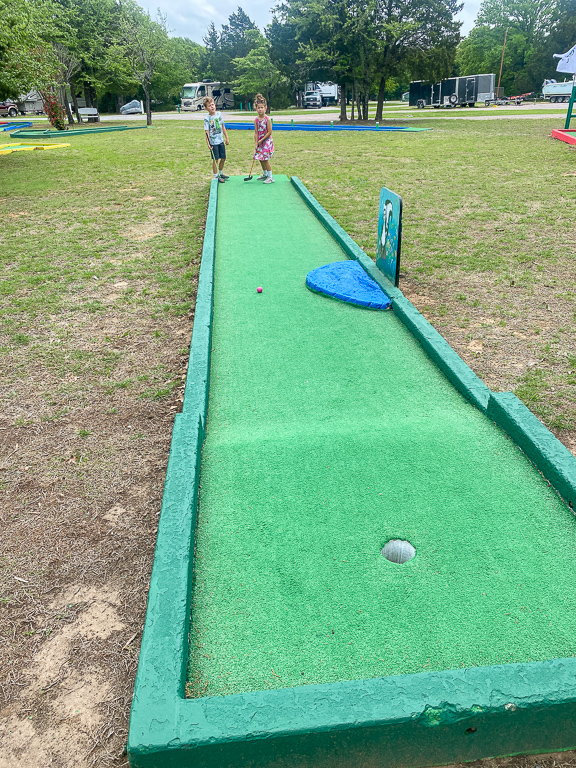 We've enjoyed our time here at Lake Texoma, but it's time to move on. Tomorrow is a long day as we drive towards Colorado! 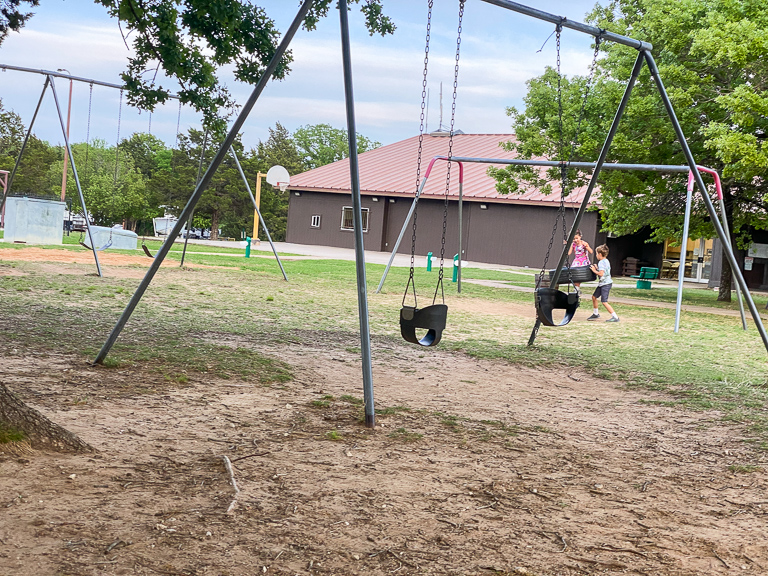