Earlier we were at Southern Hill Farms picking strawberries, but blueberries are what's really in season right now! Let's pick some of those too! 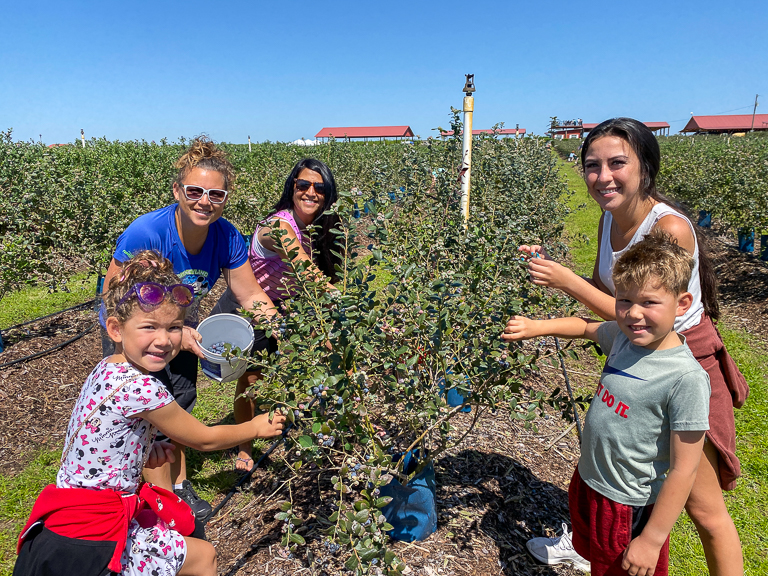 Southern Hill Farms on a Sunday was starting to get crowded! They're pretty popular with the locals. Not only do they have blueberries and strawberries, but there's also food trucks, a playground, and a kids area! 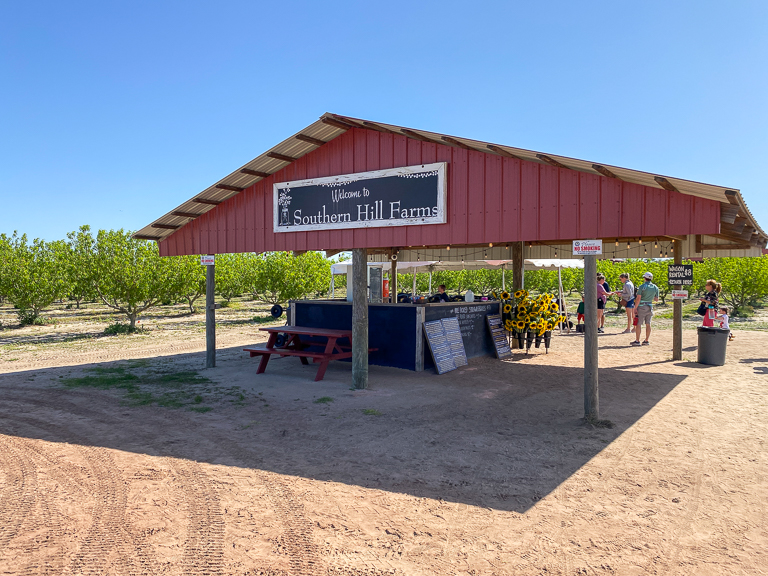 Chatting with the workers there, we were handed a bucket for all our berries and sent off into the fields. 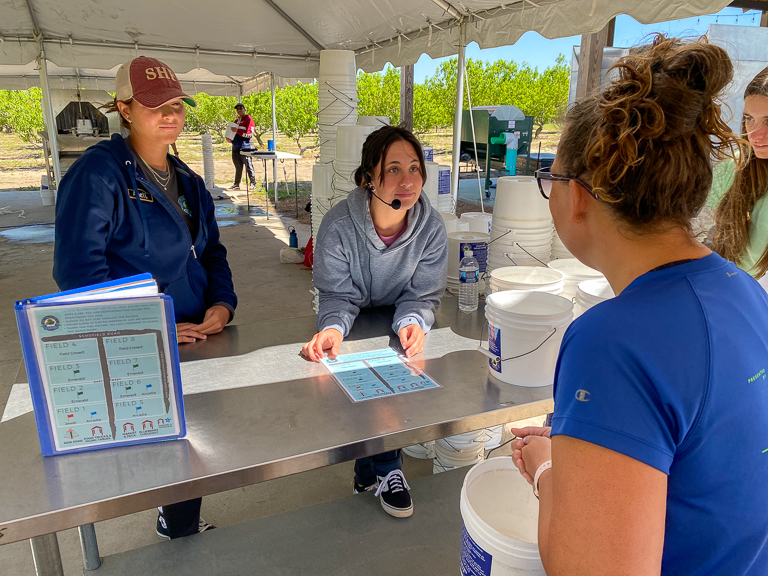 The ends of each row are marked with flags, indicating which variety of blueberries are growing. Since we're interested in sweet blueberries, we want to find the blue flagged Arcadia berries. The Emerald blueberries are a little more tart, and we'll make sure to stay away from the extra tart Jewel blueberries. 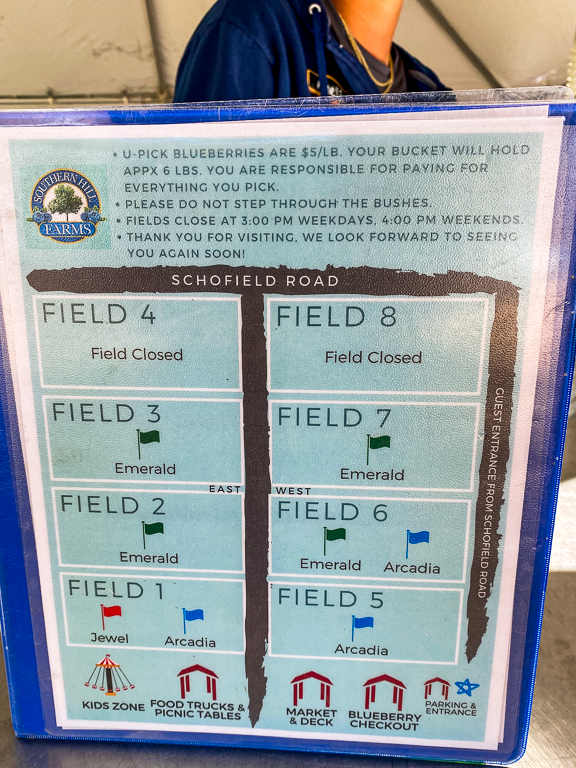 Berries are $5 per pound. We probably aren't going to fill this bucket, like we might fill a box of strawberries. 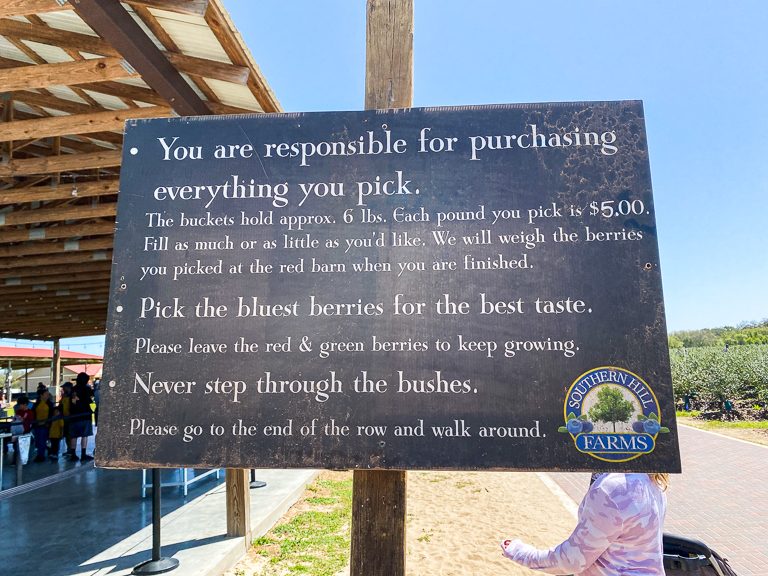 Theresa is showing us that the biggest, most ripe berries will just fall off in your hand when you touch them.
Theresa has very fond memories of eating ripe blueberries. Back in 2008, we took her parents on a vacation trip along the Fresno Fruit trail where we drove up to Fresno and stopped at every fruit stand we saw. At one blueberry farm, the owner walked us around the whole production area. After we left, Theresa had eaten almost the entire 2 pints of blueberries that we bought, and we had to turn back around to buy more! 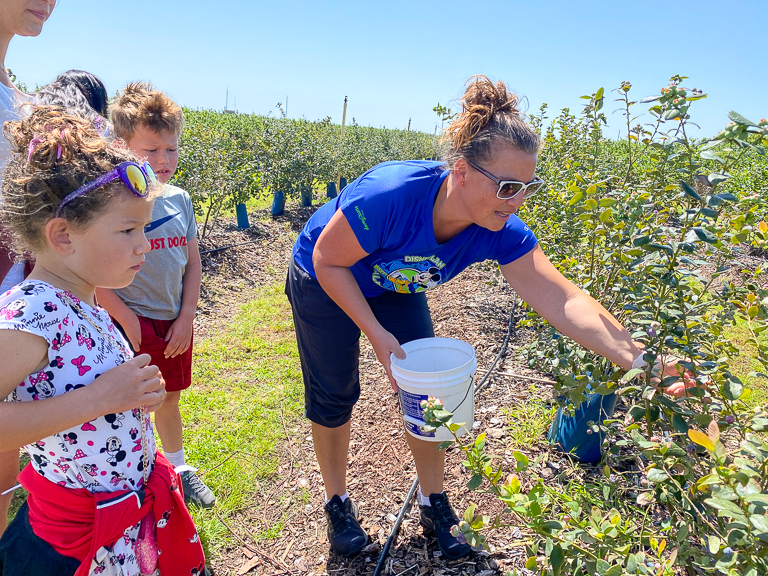 The biggest, bluest berries should be the tastiest. 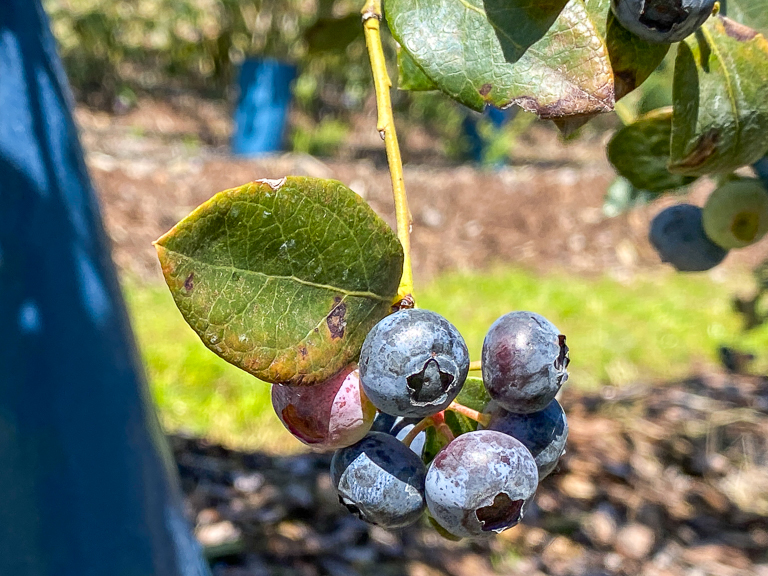 Everyone got to work, pulling blueberries off the bushes. 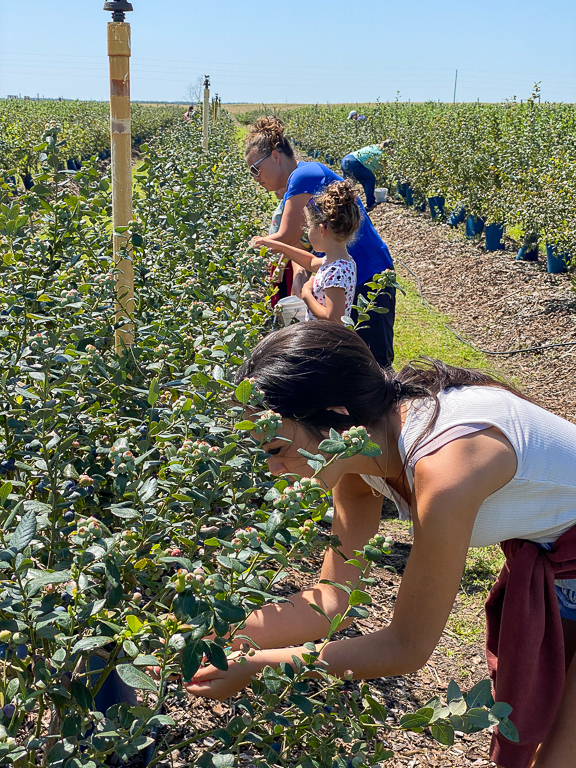 Those are so blue that they're almost black Ian! 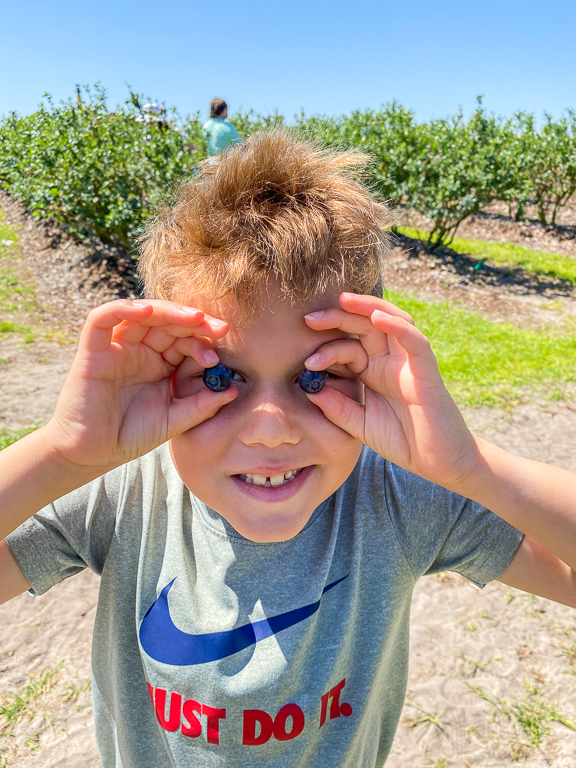 No shortage of blueberries here. 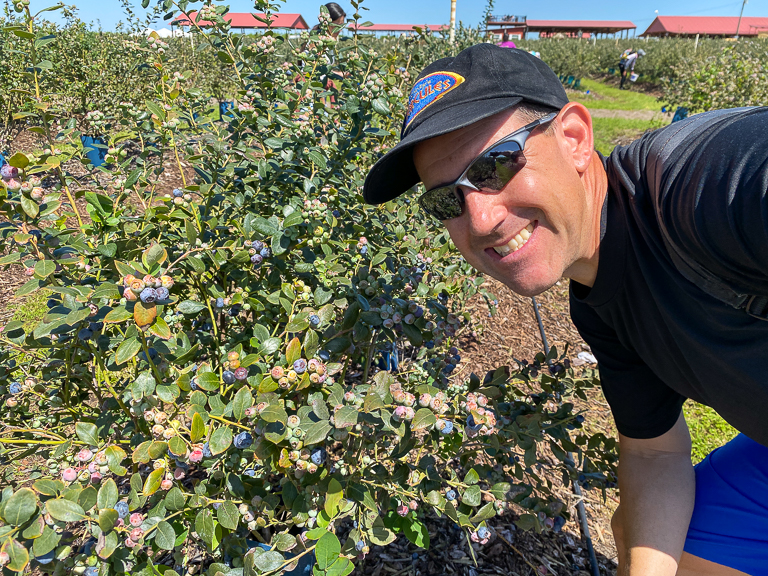 Once we gathered as many as we wanted, we took our bucket up to the barn to get everything weighed. 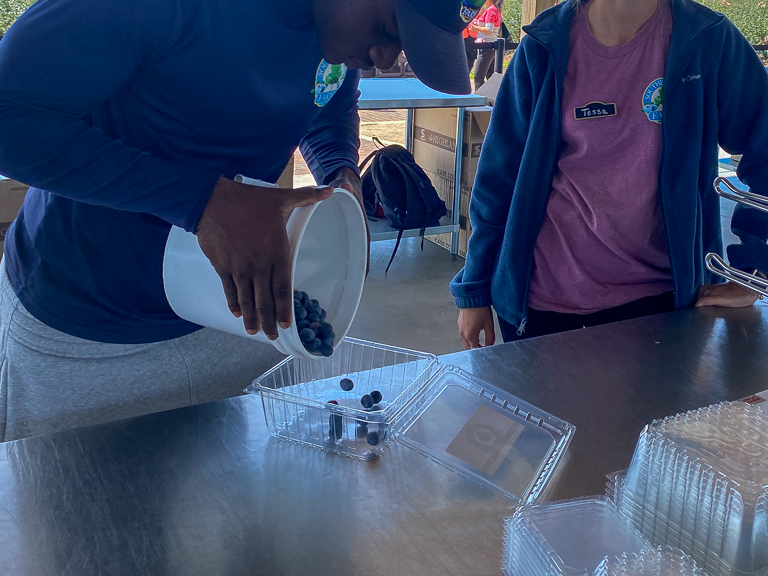 Just over a pound of berries. 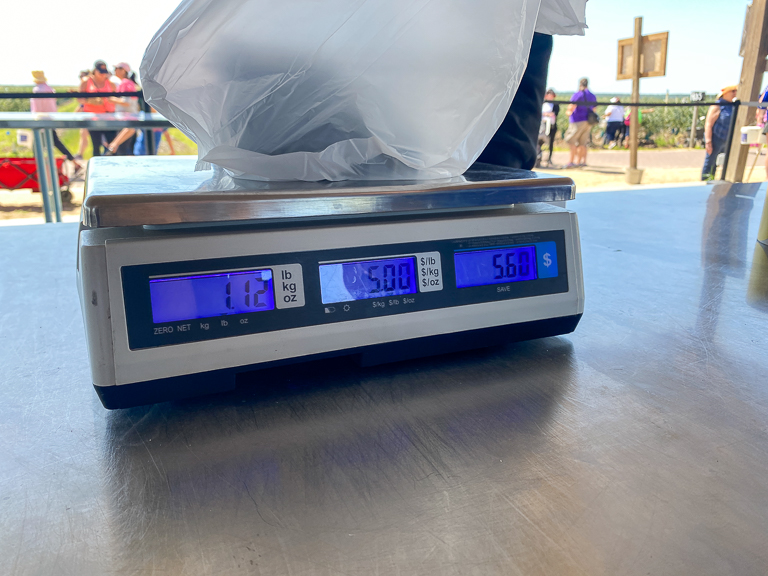 Between the blueberries and the strawberries, we've got a pretty good haul that we're taking home today. 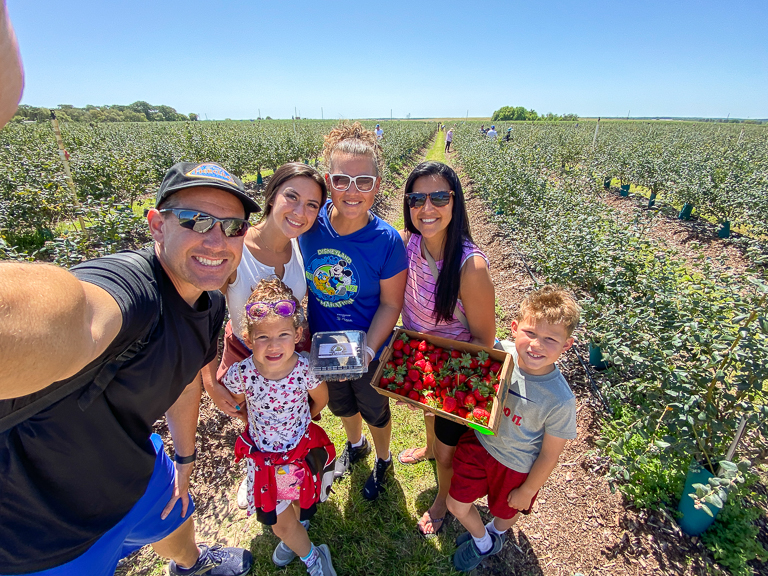 But how do the blueberries taste? 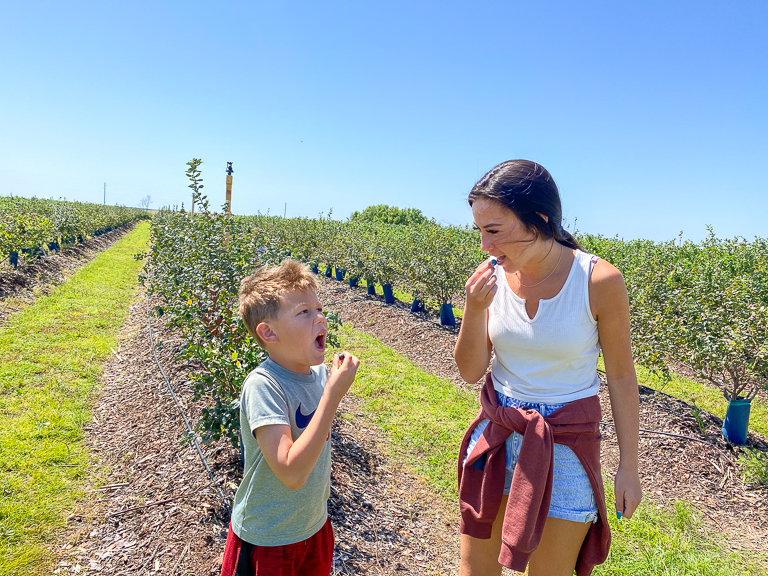 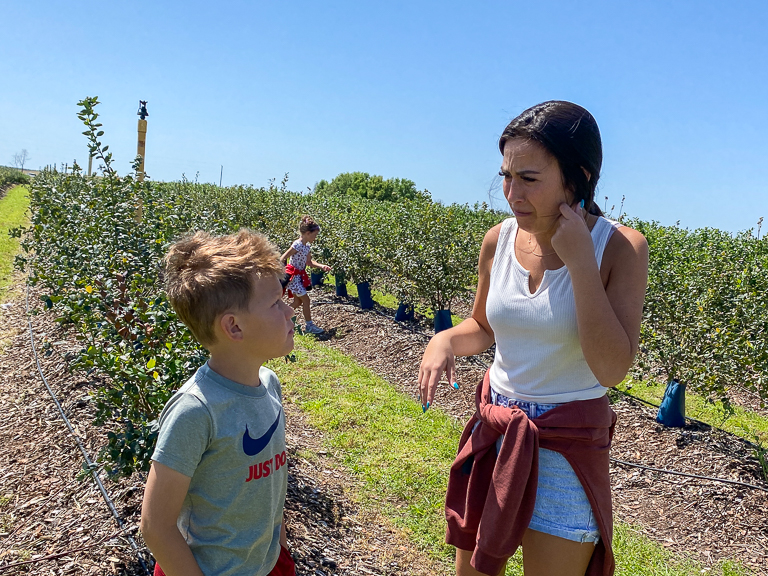 Aubrey let us know that she doesn't actually like fresh blueberries. Haha.
Well, I hope that she'll like blueberry treats from the food truck a little more. We're headed there next! 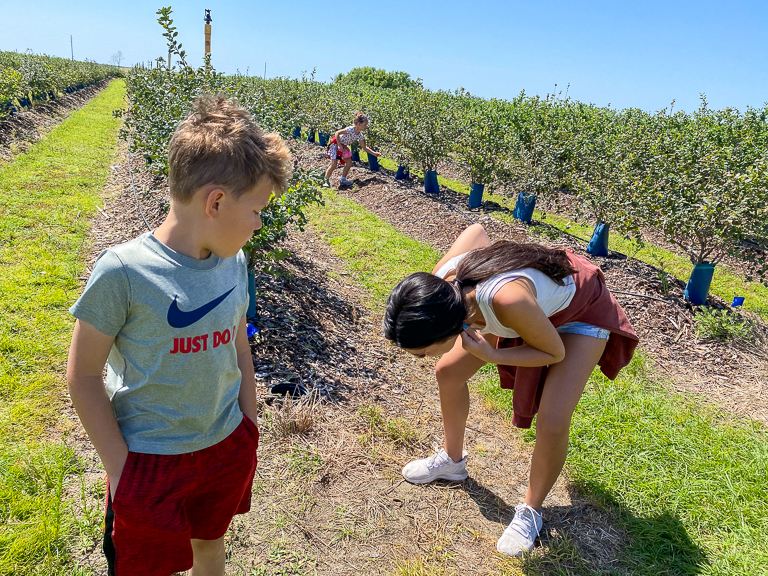