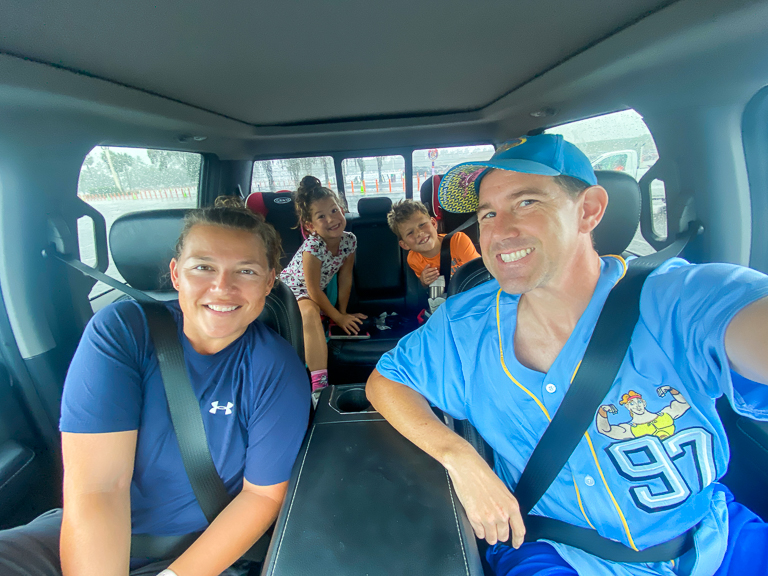 It's raining! And it's coming down hard! Maybe this will be a good thing and people will leave, resulting in shorter lines for everyone else.
I wanted to get a good video of the rain to post on the blog. The view out my window wasn't much to look at, but Theresa's window was better. I rolled it down for an even better video. I hope you enjoy.
Taking a look at the wait times, there's quite a few rides that are down. Outdoor rides just don't do well in the rain. I'd expect the other rides to have their times jump up a bit, but it doesn't actually look too terrible. 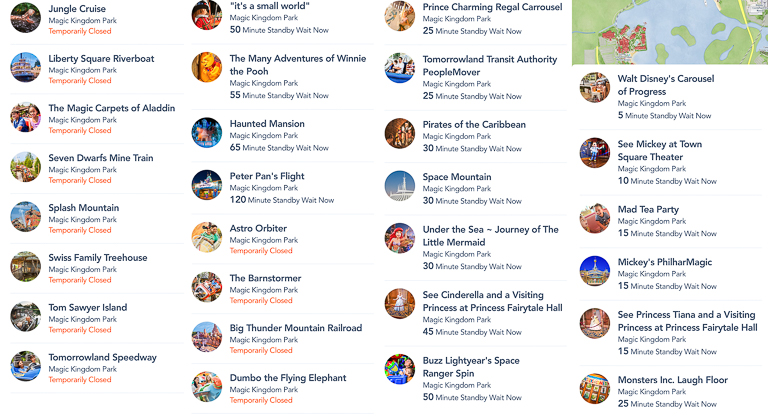 Finally after 30 minutes of waiting, the rain has stopped enough that we can walk over to the Ticket and Transportation Center. 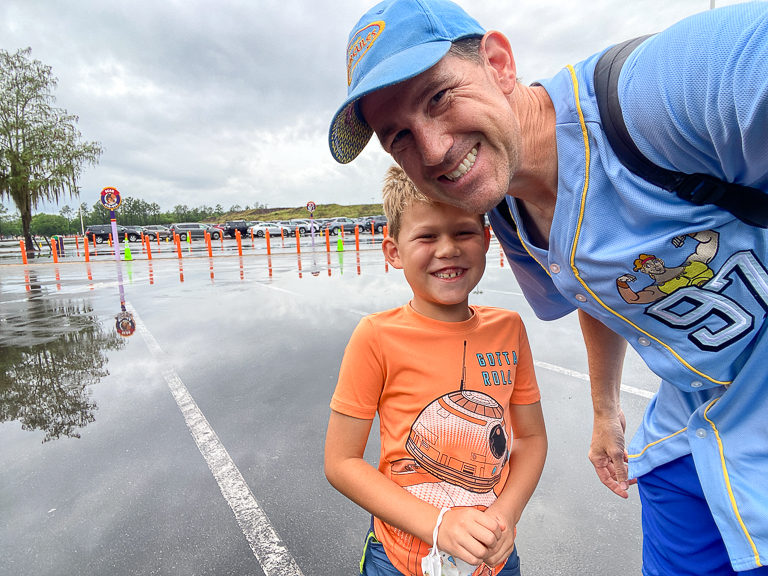 Just a few little drizzles along the way. The bulk of the storm looks to have passed. 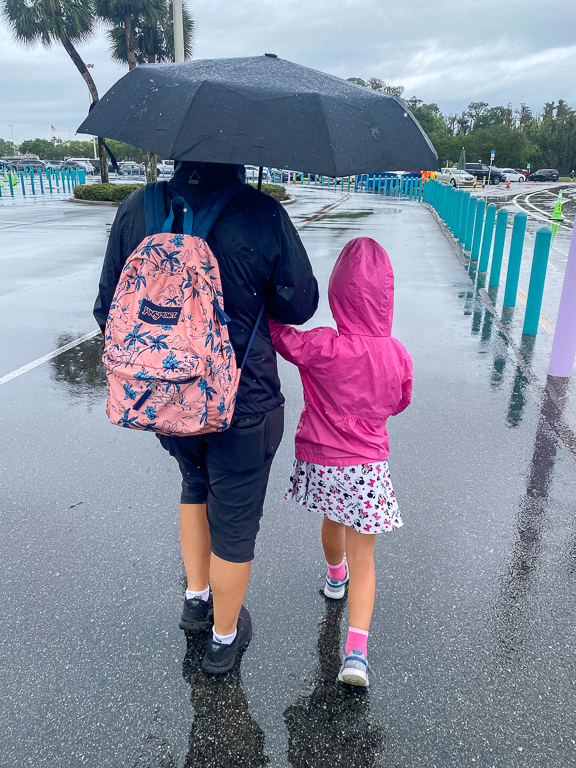 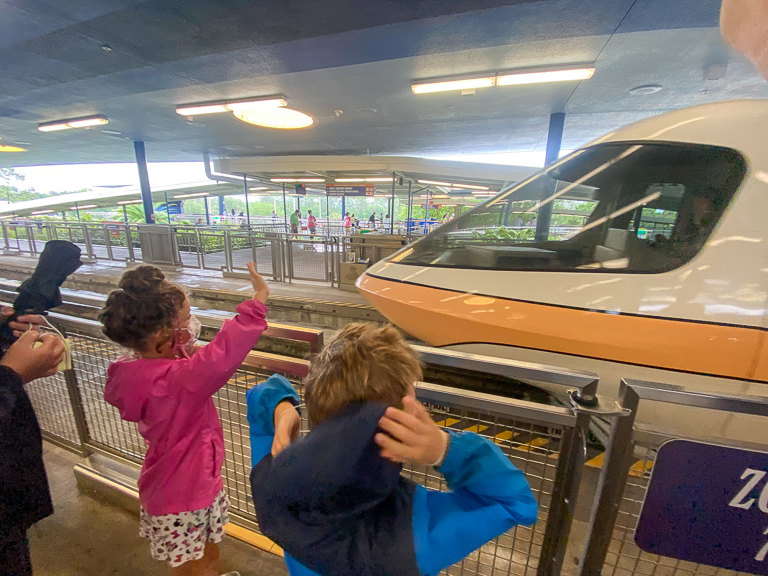 Right after we entered the turnstiles at the Magic Kingdom, Ian, with his sharp eyes, spotted a large worm in the middle of a busy walkway. 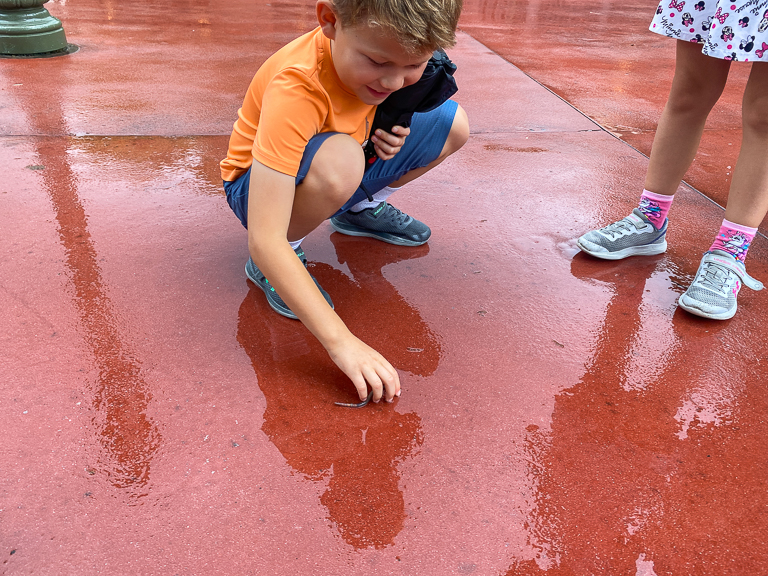 Today is your lucky day not to get squashed buddy. Ian picked him up and moved him into a nearby planter. 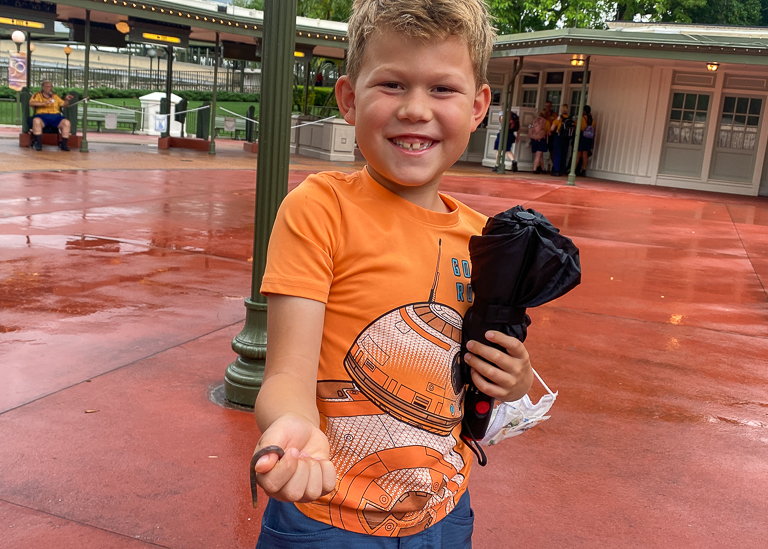 Where's the sanitizer?
We caught the tail end of a rainy day parade, making sure to wave at the characters. 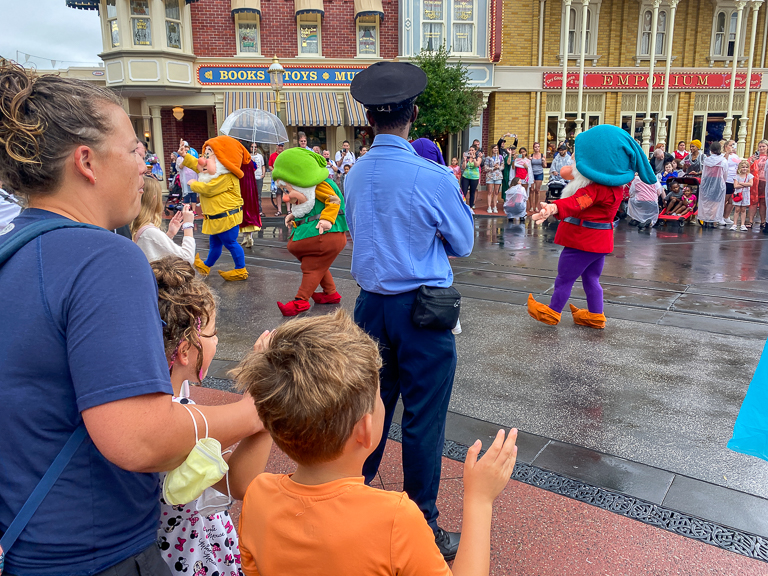 Since today is our last day, we're looking at our focus rides again. Doesn't matter the line length, if we want to ride it, we'll do it.
Theresa love riding the People Mover as it zips around Tomorrowland. 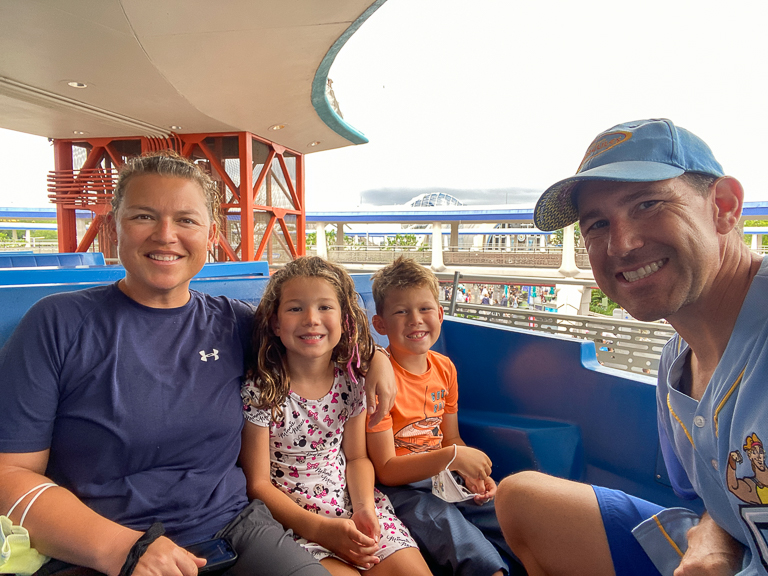 Afterwards, all of us went to the covered area in the Storybook Circus Land to eat dinner. The rain had started back up and it wasn't long before we were joined by Chip and Dale in a roped off section where you could do a meet and greet. 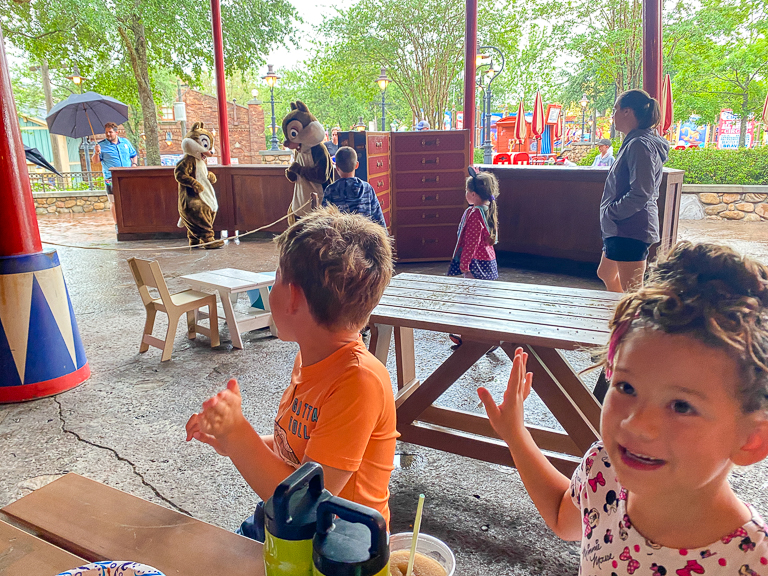 Of course the kids wanted to go over and say hi. 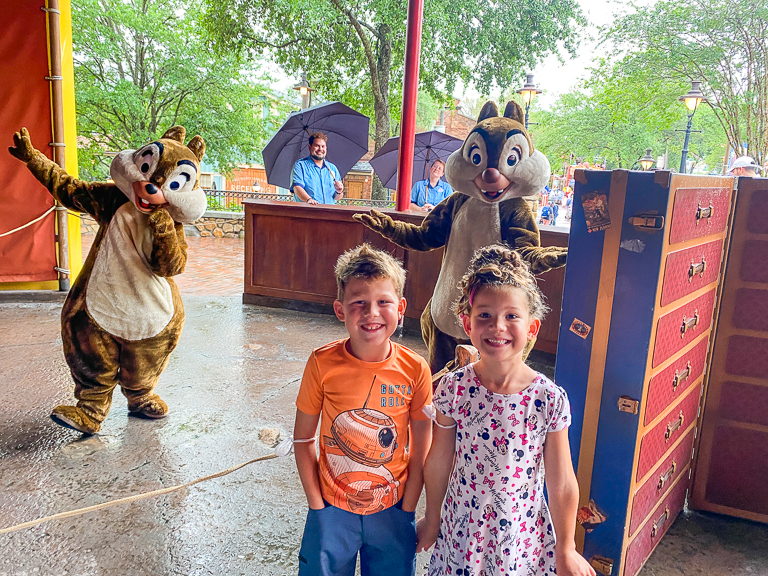 And it really wasn't busy. It's not a crowded section of the park in the first place, and hardly anyone comes into this area. The kids messed around with the chipmunks, eventually challenging them to games of Rock-Paper-Scissors. Alli was pretty even with Dale, but Ian couldn't catch a break with Chip. 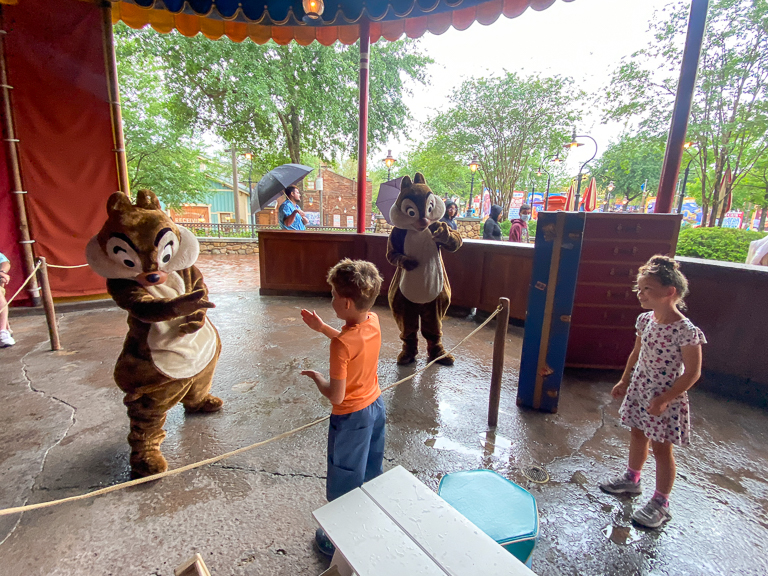 Chip had his number and won 5-6 straight games. Then he pointed at me and called me out. I asked Ian what to do, he suggested rock, and I won! Take that Chipmunk! They had a lot of fun with them, and then had to come back to eat their dinner. 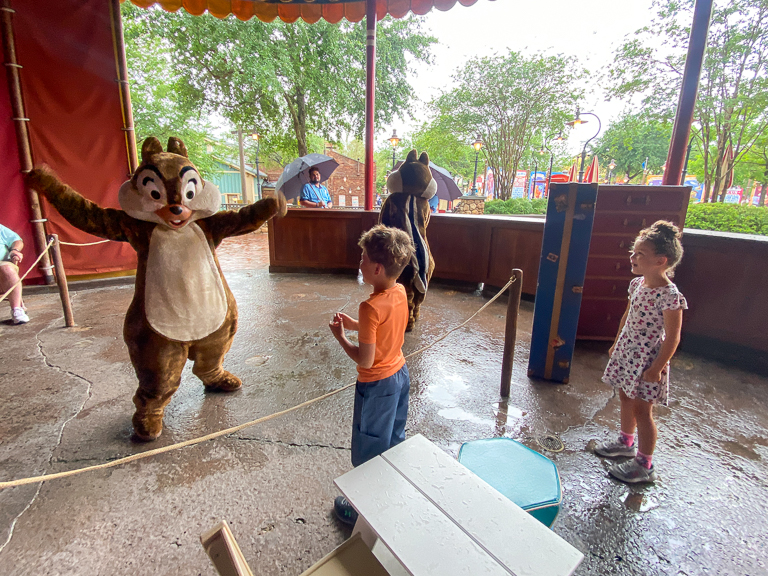 Let's go on more rides! Big Thunder was showing a short line, and the kids always love it. You just had dinner so you wouldn't want any popcorn, would you?
Yes please! 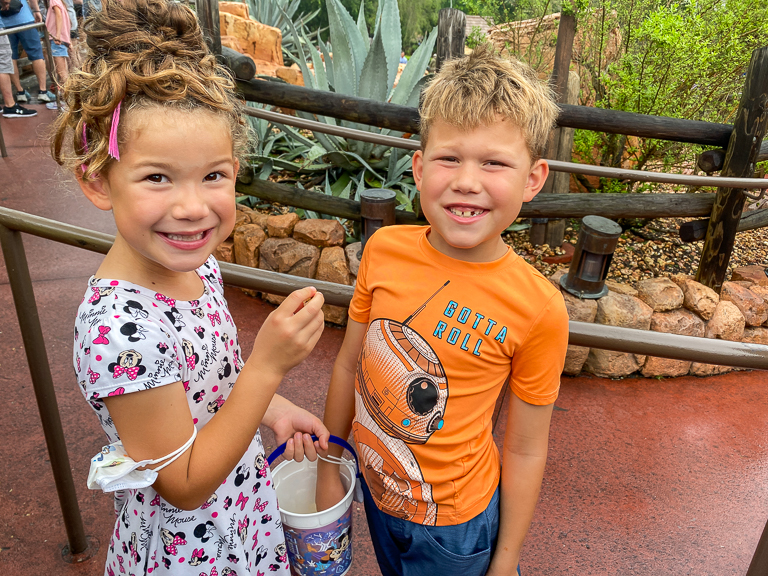 After 30 minutes, we were in the back row and enjoying the ride. 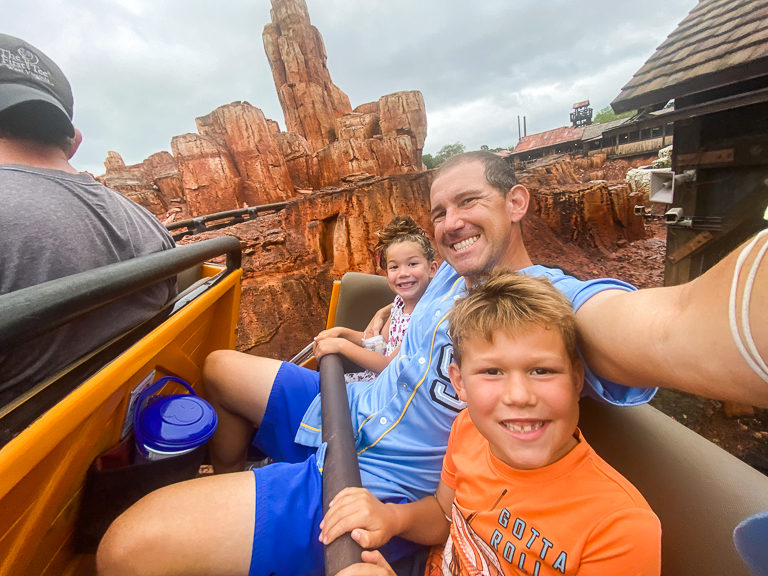 Theresa even caught a good one of us with the big rocks in the background as we pulled into the station. 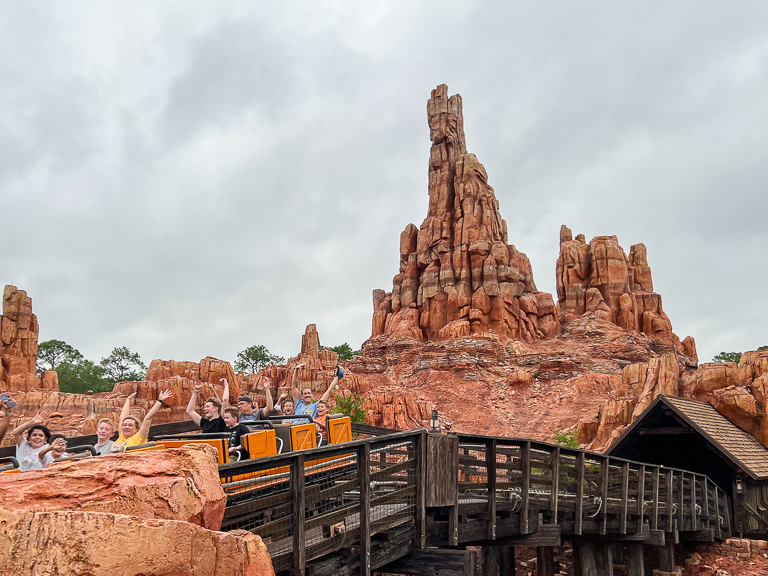 What do you think we should ride next kids?
Both - Splash Mountain!
Okay... We've been avoiding the rain, trying not to get wet, but now we're purposefully getting on a ride that is going to try to get us wet. 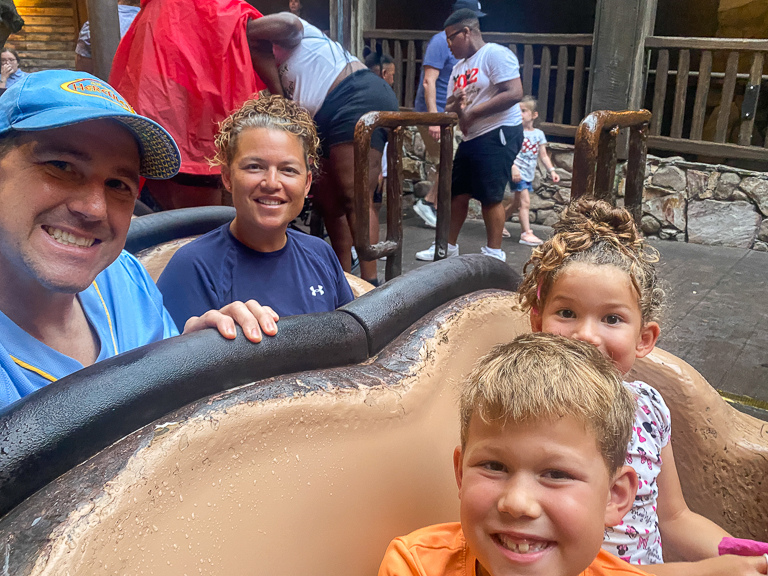 Ian - Why is he doing that daddy?
I think we need to try to watch Song of the South and you can see the whole story of Brer Rabbit, Brer Fox, and Brer Bear. 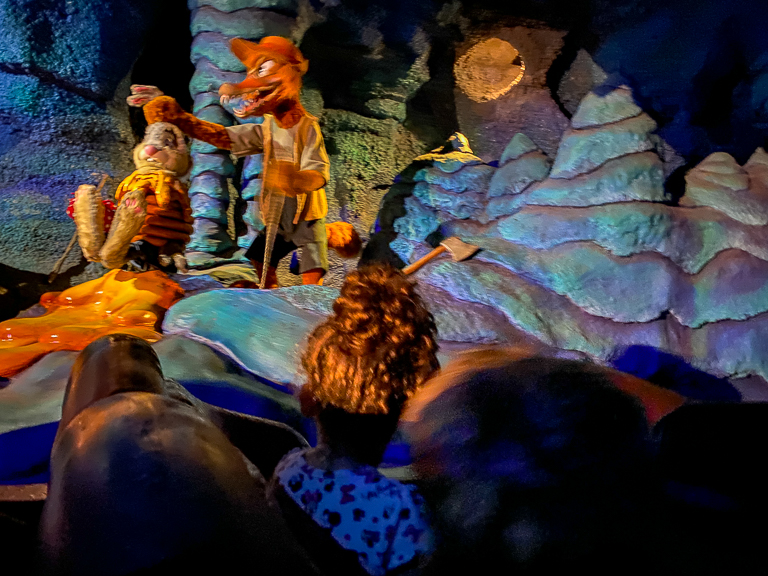 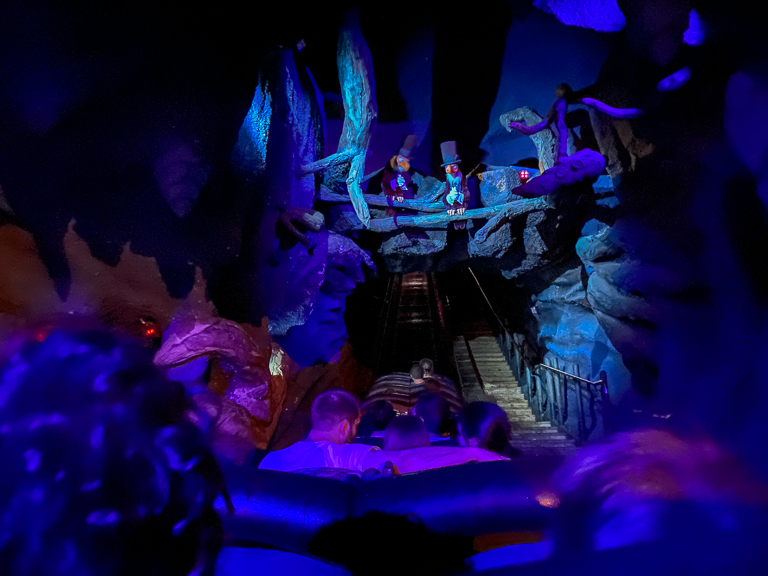 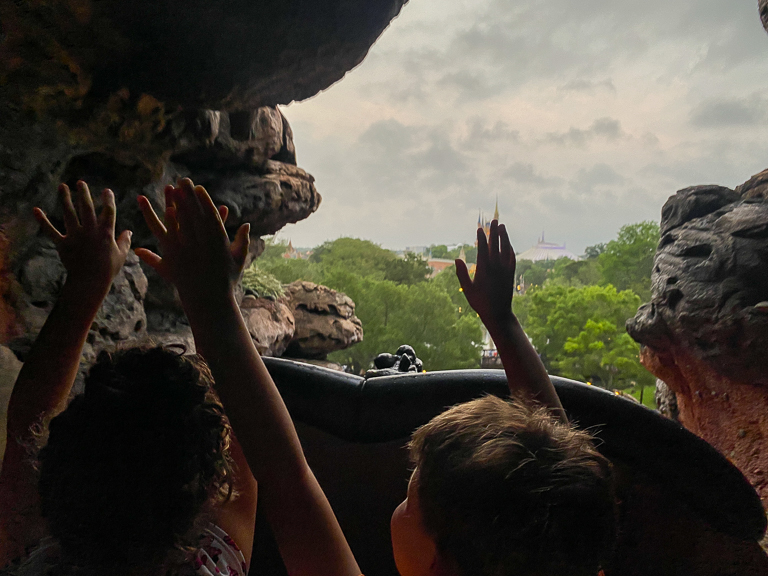 Big hands in the air and looking for the camera! 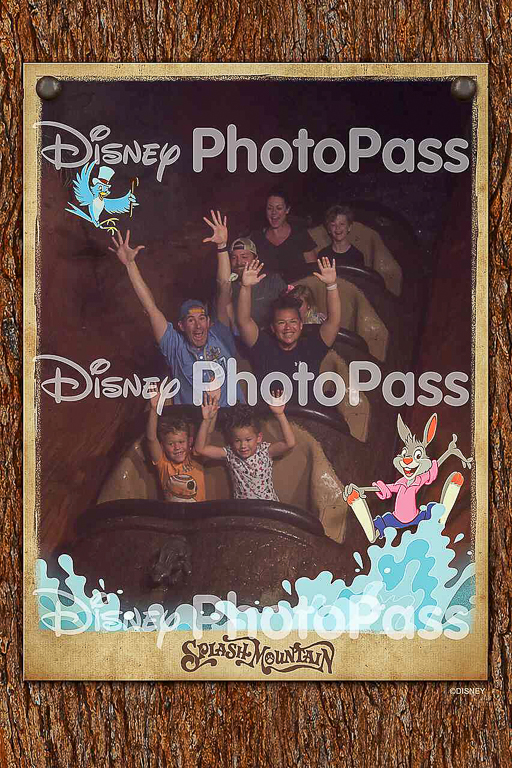 Theresa said she was so focused on keeping her hands in the air and looking for the camera that she pulled her rain jacket up too late! Oh dear. 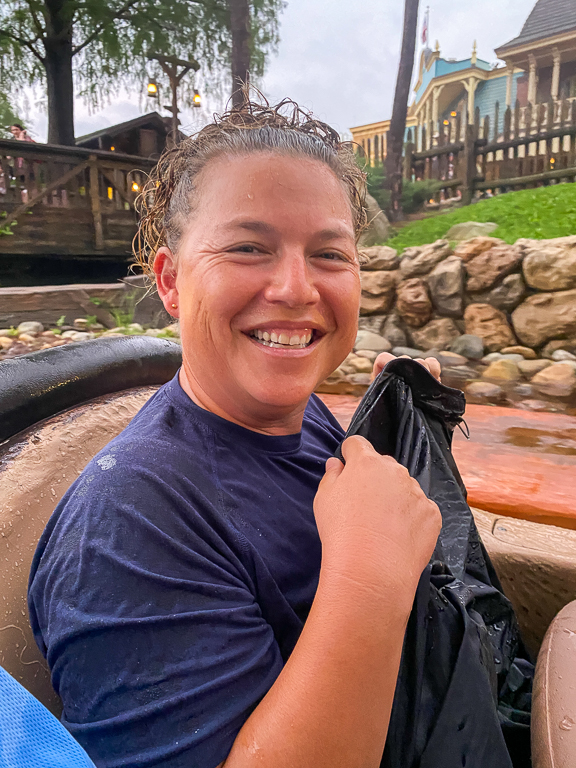 So far we've enjoyed a few treats in our last nights at each of the parks. Hollywood Studios had Num Num Cookies. Epcot had Caramel Popcorn and Gingerbread Caramel Cookies. I think the only thing the Magic Kingdom could be is a Dole Whip. 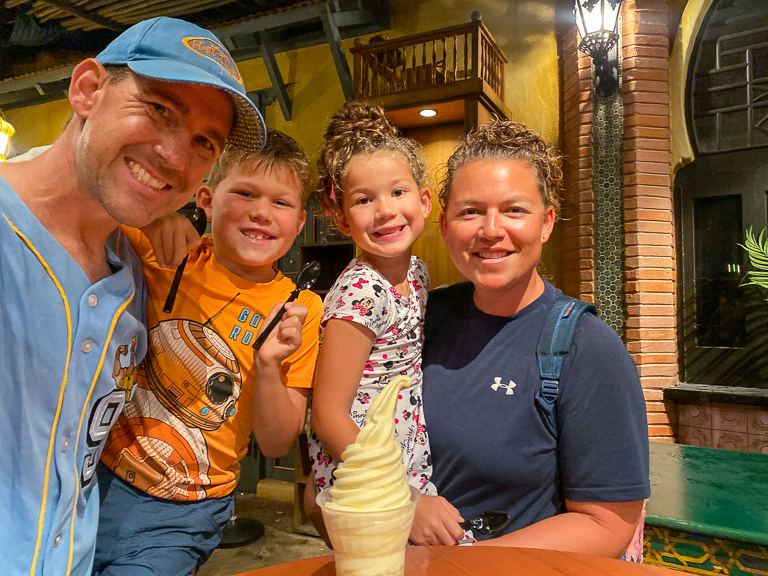 Go ahead Ian. Uncap it and show us what we all know is there. 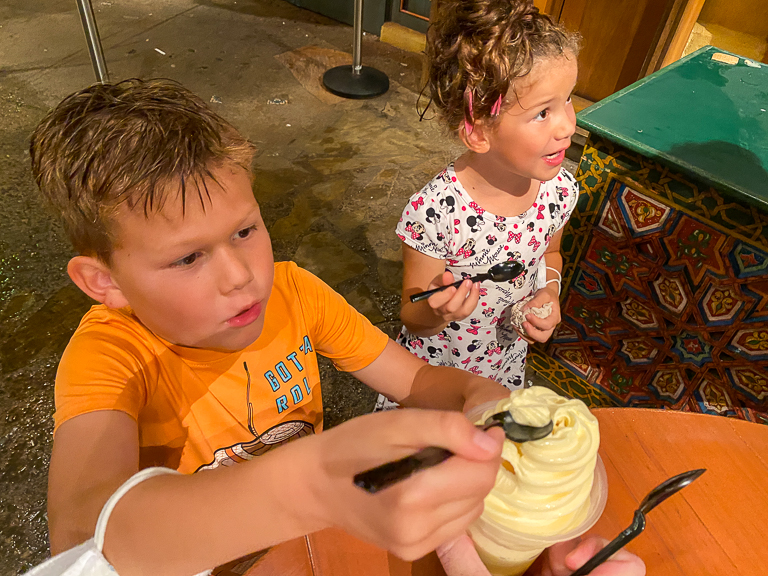 The Void of Disappointment. Always. 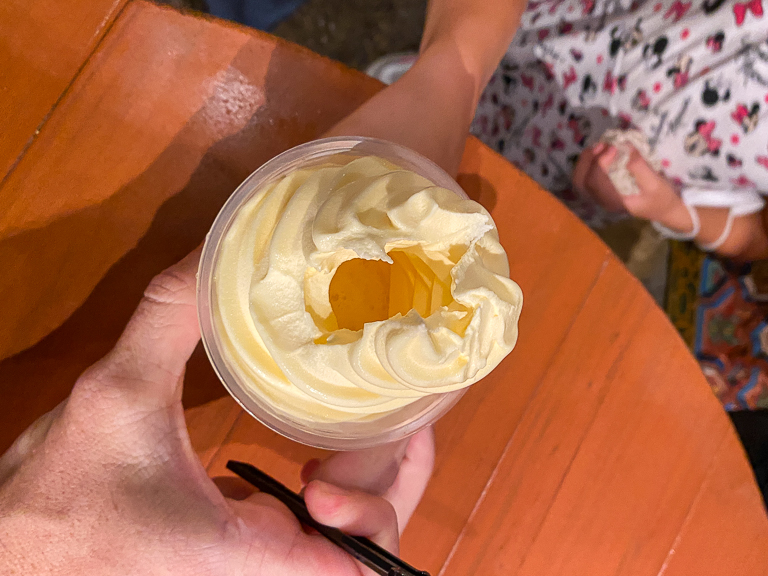 The kids really wanted to get on Space Mountain today, and one of the best times to go is when people are queuing for the fireworks. At 8:15pm we hopped in a 60 minute line, hoping the sign was just showing a high number to keep people away. When we entered the queue, the standby line was all the way backed up to the entrance! We waited and waited as time ticked by. 8:30pm, 8:45pm, 9:00pm. Finally we made it through the queue tunnel to the open area where the switchback queue starts. Ah, here's the problem. There's only one side running. The standby queue is going through the entire set of switchbacks on the left, only to have to then cross over to go to more switchbacks on the right. Couple that with all the Lightning Lane people and you can see why we're not moving fast. I made a gametime decision to ditch the queue and do something else.
What time is it? 9:15pm! Fireworks are almost over! We've got to move! I texted Theresa who was waiting for us outside and she started a fast walk over to the Seven Dwarfs Mine Train.
I took the kids and fastwalked...
Ian - We ran Daddy.
No, we fastwalked. We're not supposed to run.
Ian - You fastwalked. We had to run.
Anyway, we quickly moved ourselves over to the Mine Train just as the last of the fireworks were going off. 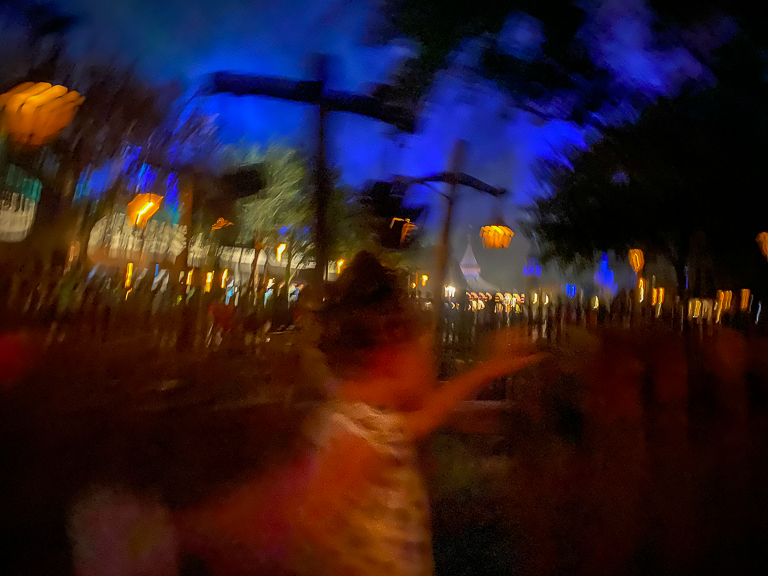 And thirty minutes later were in the back row of the ride! Perfect! 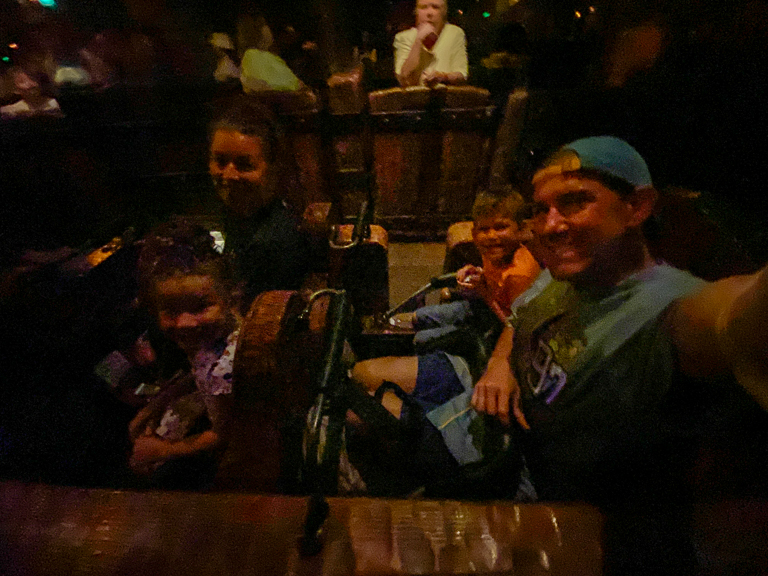 It's a fun coaster. Theresa's favorite here.
When we got off, the park was closing in only a few minutes. We could hustle and maybe make it back to Space Mountain, but I don't want to risk it. What should we do kids? 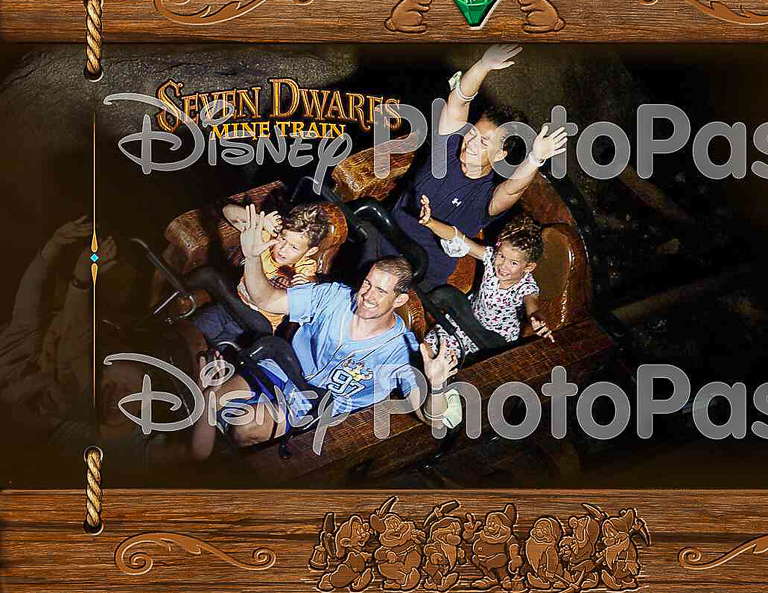 Mine Train a 2nd time. Perfect! Just a 20 minute wait in line this time. 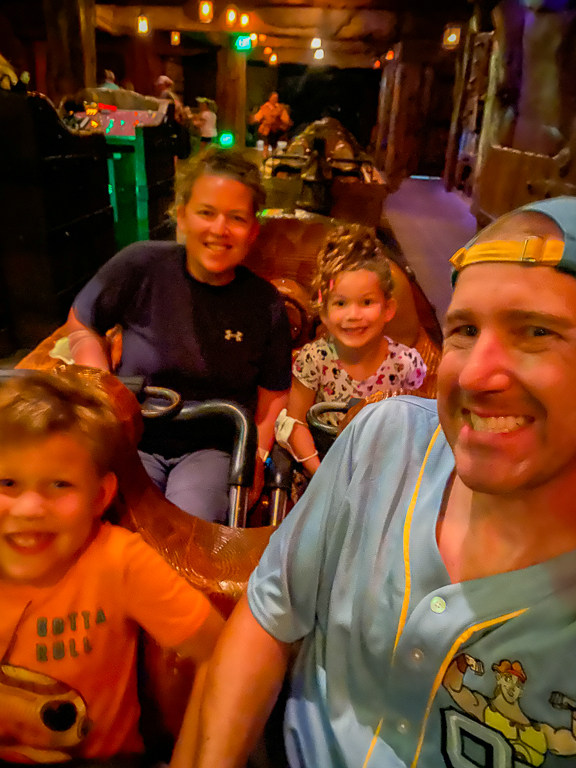 And a great ride to end our time here in the Magic Kingdom with.

It's been a magical day today, despite a little bit of rain. Trying to catch a little more magic on the way out, we attempted to pull the sword out of the stone. Ah, it was not to be today, but maybe when we come back in a few months. You never know.
Tomorrow is going to be our last Disney day! Just one more park left to visit! See you tomorrow Animal Kingdom! 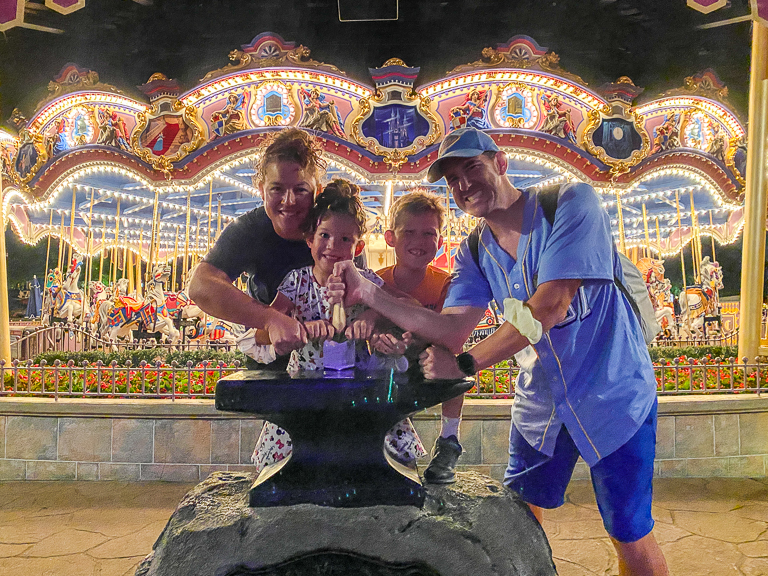