Florida, it's been fun. Really fun! But now it's time to hit the road and start our 2022 travel. 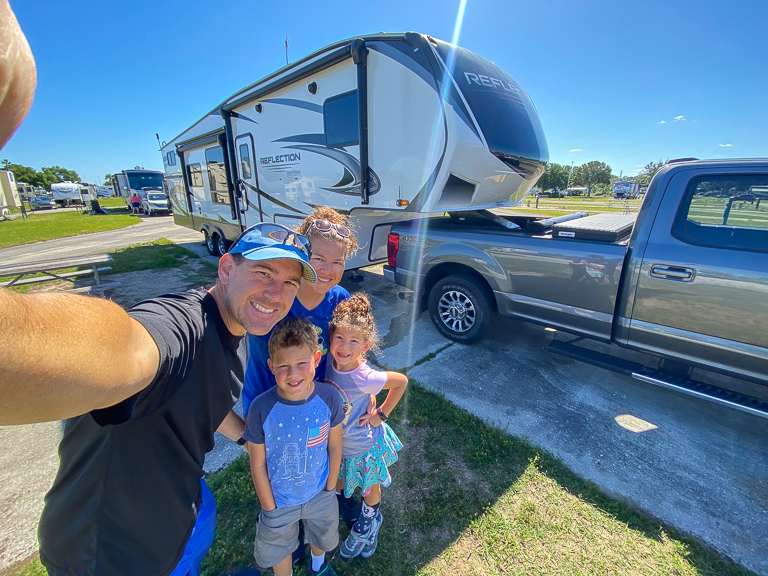 Today's drive is taking us out of the Orlando area and to the upper part of the state. 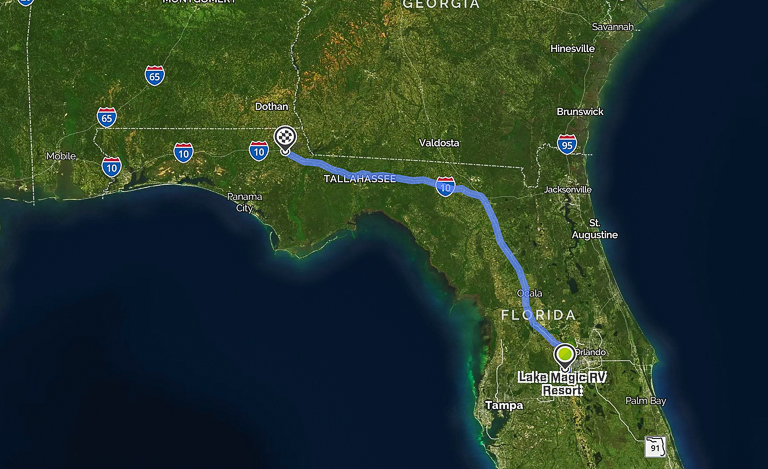 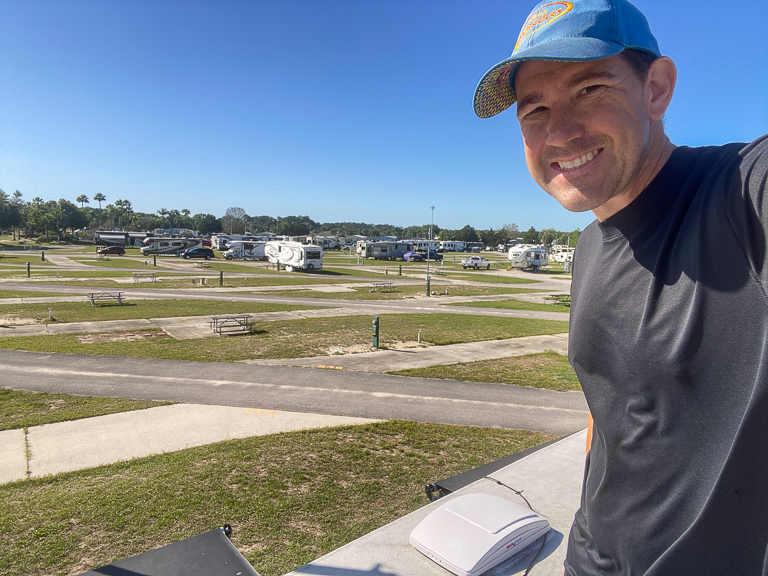 Ready Beast? The truck has had a bit of a break this winter, only having to pull the RV every 3 weeks or so. It's time to start moving a little more frequently. 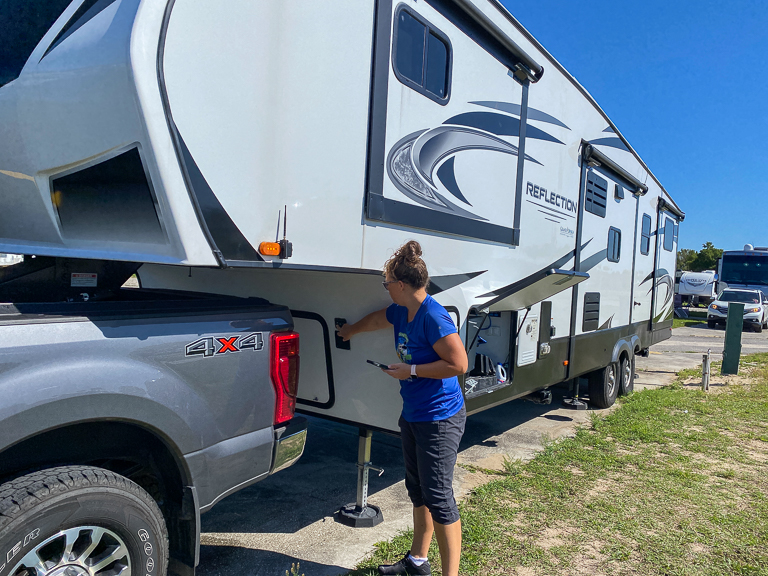 All loaded up and ready to go. It's about 5 hours of travel time. The kids are all set. They'll happily read books and play games while we drive. 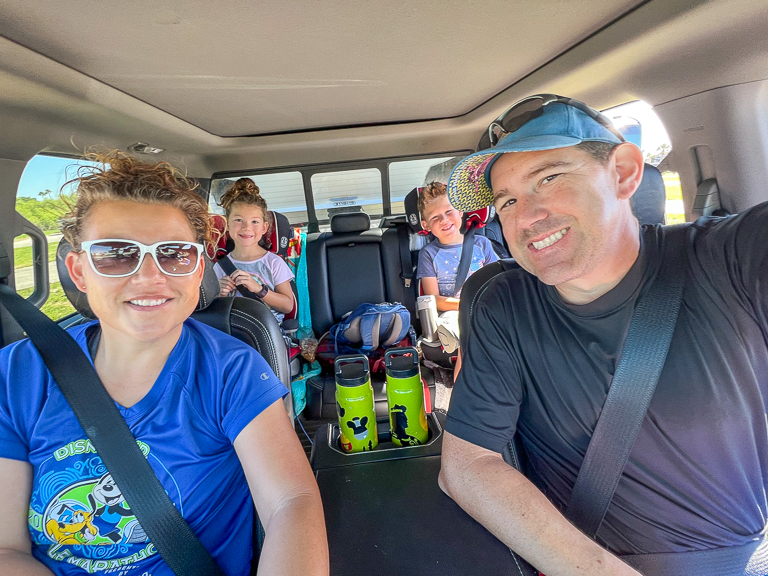 One of the things I wanted to make sure we saw during our drive today was the Bronner's billboard. They're the largest Christmas store in the world and when we're in Frankenmuth Michigan, we have to stop by! On their website they say that their furthest billboard is all the way down in Florida!

During one of our drives, I might have had us take a little extra detour to try to find it. Well after having no luck seeing it "On I-75 near Ocala" I took to Facebook to ask them where it really was. 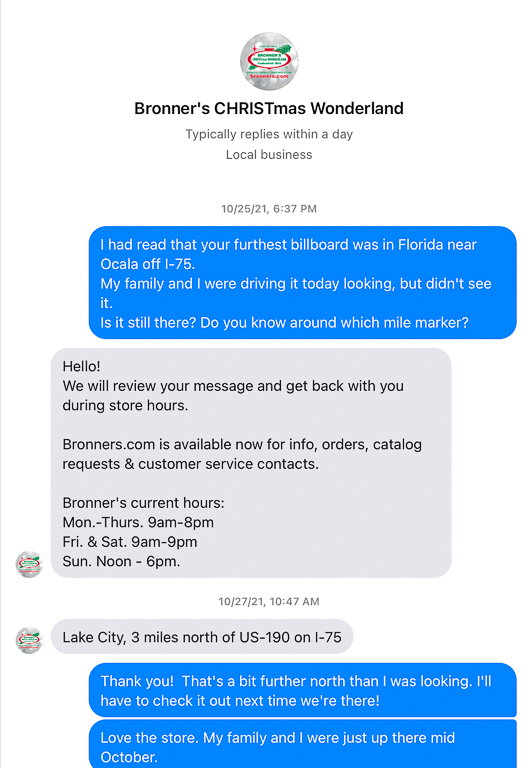 They let me know that it's actually near Lake City Florida now, about an hour's drive further north. 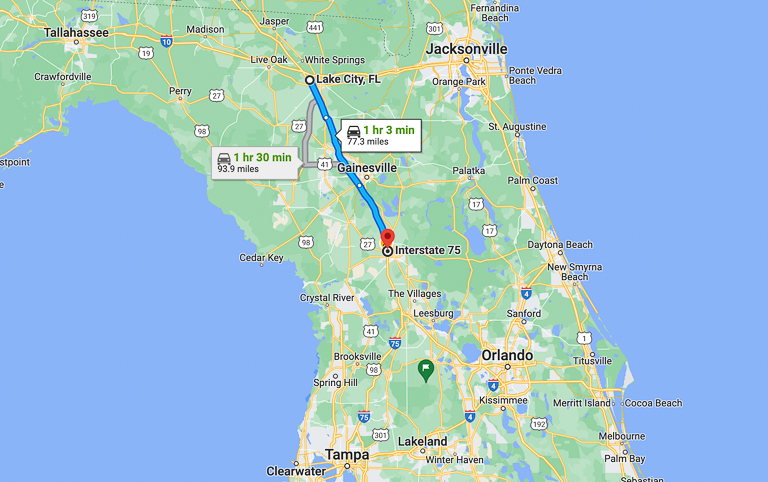 And so, it was on I-75, after mile marker 430, just before you cross under Nash Road, that you'll find the sign for Bronner's Christmas Wonderland in Frankenmuth, Michigan. Bummer that it's so sunny and we couldn't get a better picture, but I'm happy we got to see it anyway! 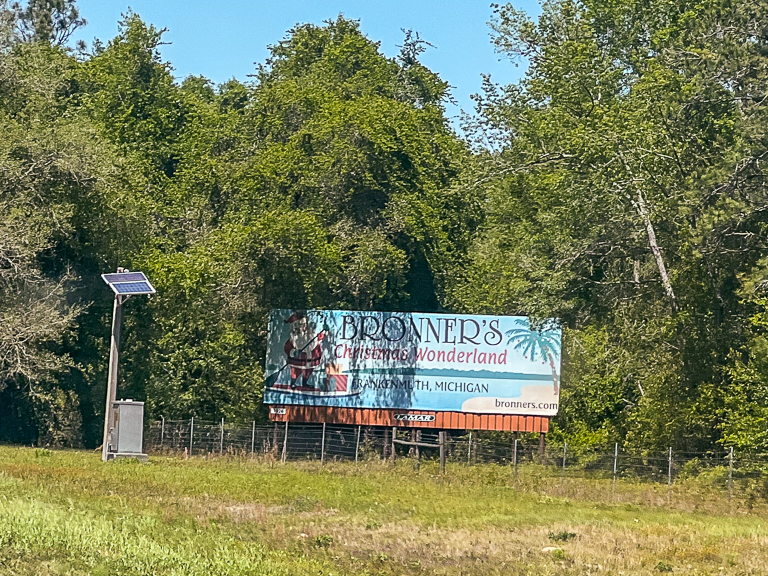 What the sign doesn't say though is that it's just 1094 miles up the I-75 until you need to turn. No joke! Stay on the same road and you're almost there! 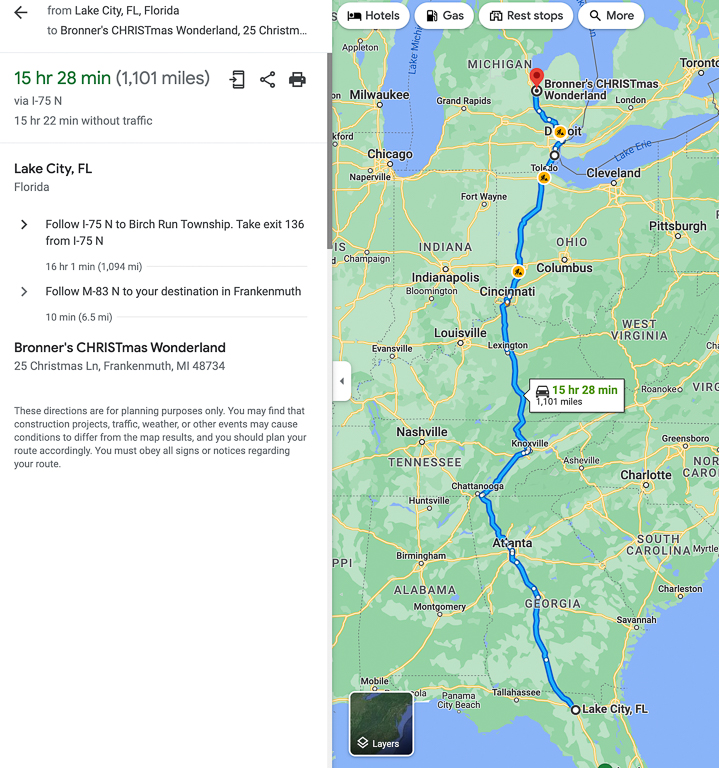 The rest of the drive was pretty uneventful. I did notice a helicopter carrying what looked like a payload and pointed it out to the kids, thinking they must be delivering something into a hard-to-reach area. 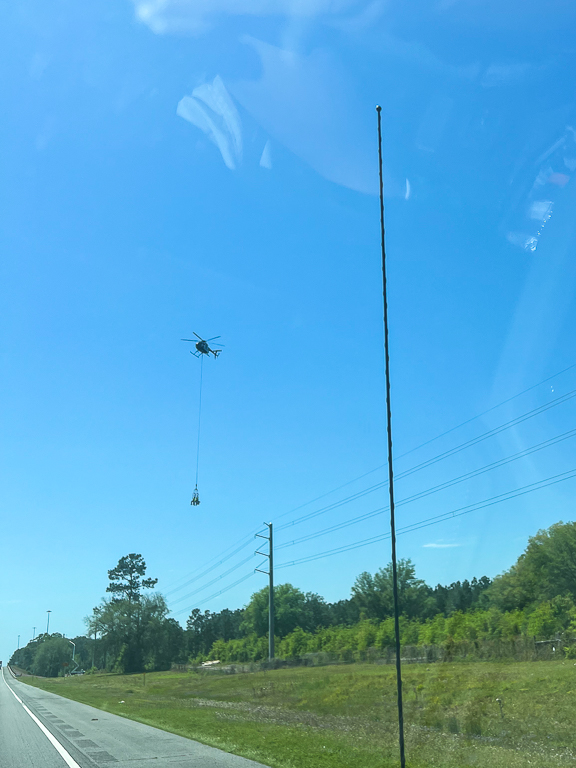 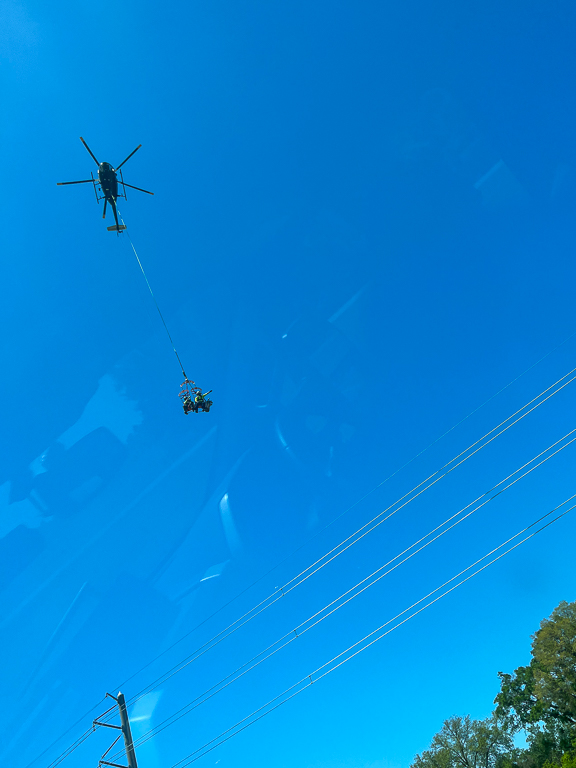 That's people! Those guys are working on the power lines!
Ian said it looked scary, but fun.
Aubrey's boyfriend Jared is planning to go to school to be a lineman and do something similar! 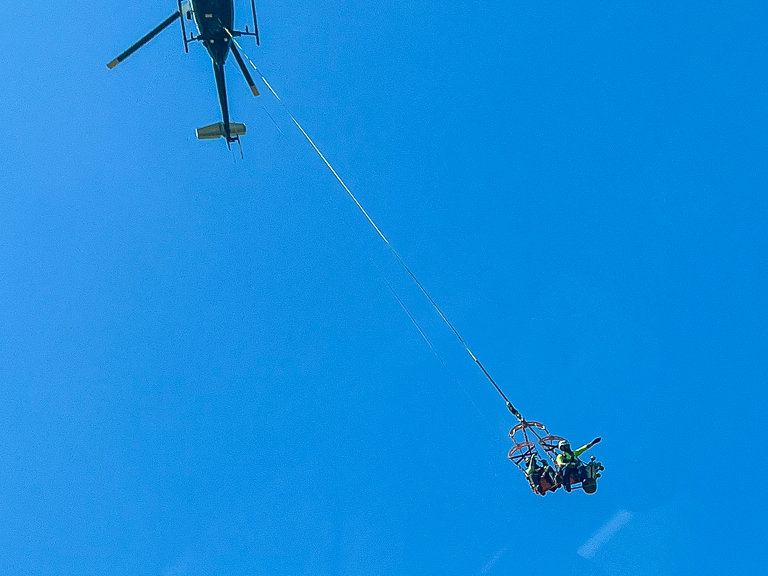 Forgive the time-jump in the photos. We arrived during the daytime, but as we pulled in, I was focused on driving and not pictures. I took these later that night.
Welcome to the Stay N Go RV park. 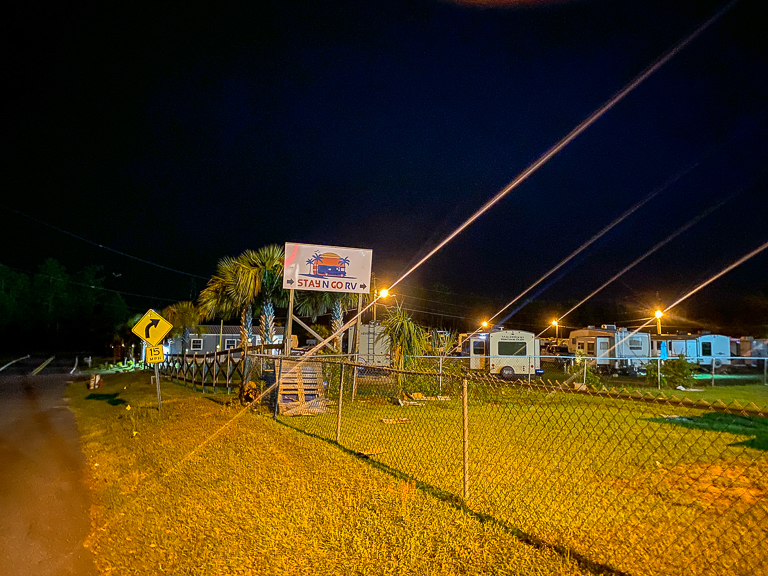 There's no one manning the office, and even the sign on the door said to just make a reservation and drive to your spot. 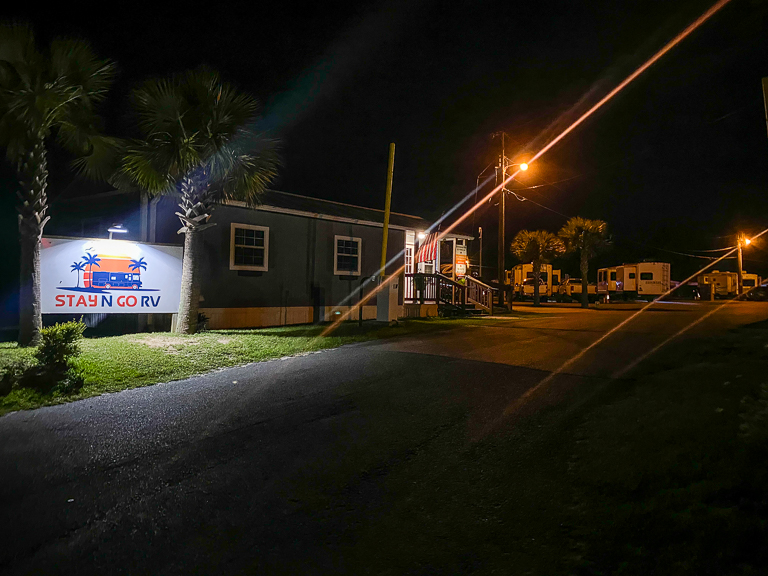 The map on the wall shows the locations. There's really not a lot to this place. No frills or amenities. It's all in the name. Stay and then go. 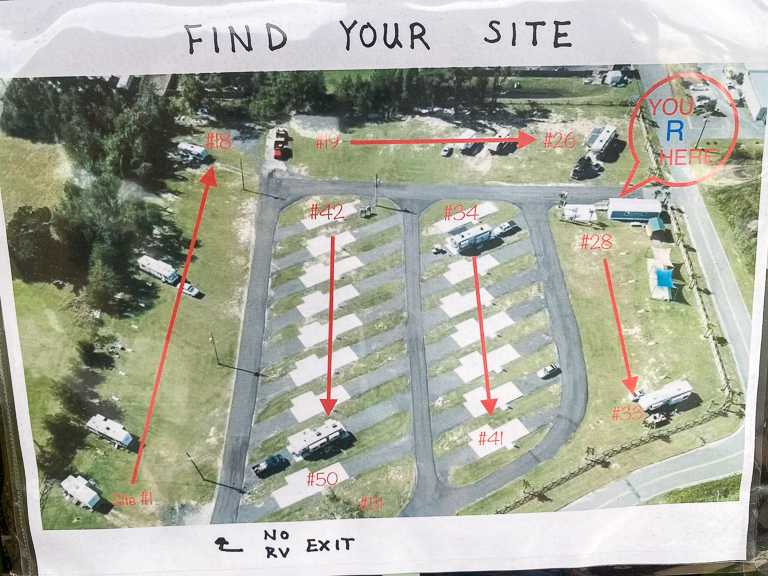 One of the things we really liked about this place was the large pull-through spots. 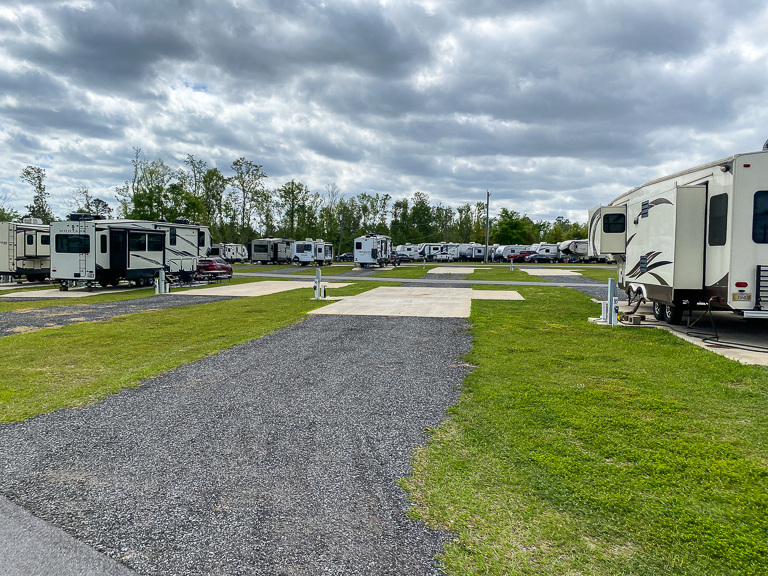 Though for reasons unknown, the concrete pad to our spot went up at a steep ramp. Theresa was prepared with the yellow blocks to try to keep us from scraping our stabilizers. 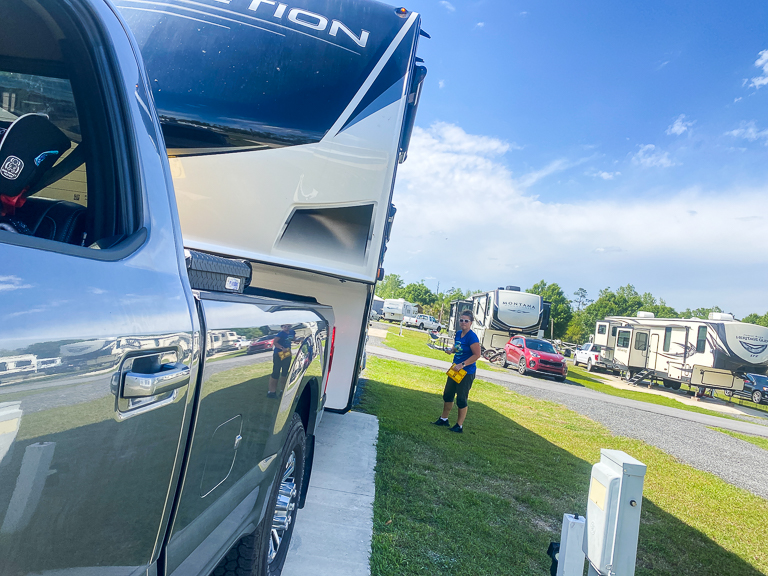 Close enough to leave a bit of a mark on the pavement. Our neighbor saw us and suggested taking off the feet of the stabilizers to get us up a little higher. That's a great idea I hadn't thought of before! For some reason, when Grand Design made the RV, they left the stabilizers uncomfortably low to the ground. We've had 3 people wave us down, telling us they were still extended, but it's just how Grand Design made it. It's so bad that I worry about bending them even when we're going over a speed bump. Well on the suggestion from our neighbor, our new checklist when we get ready to leave is to take the feet off the stabilizers. 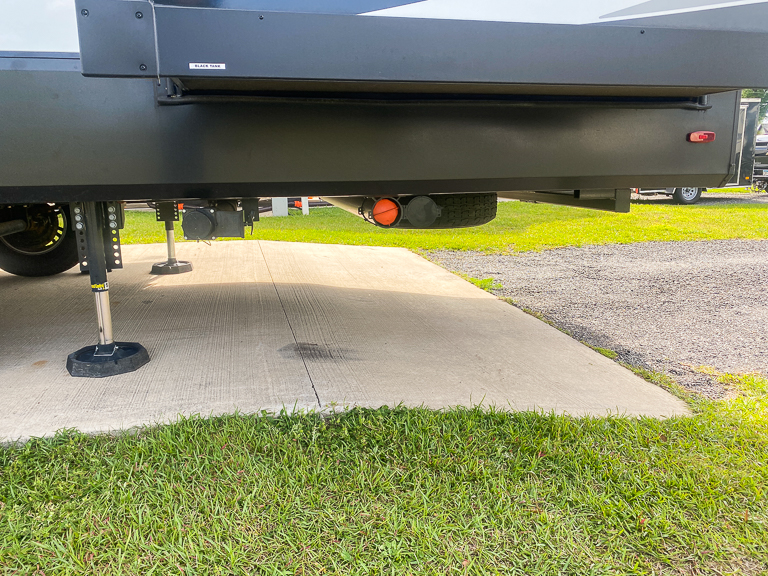 Today is really just a transition day, so we don't have anything planned tonight. After dinner, the kids and I decided to get out the magnet blocks and play. 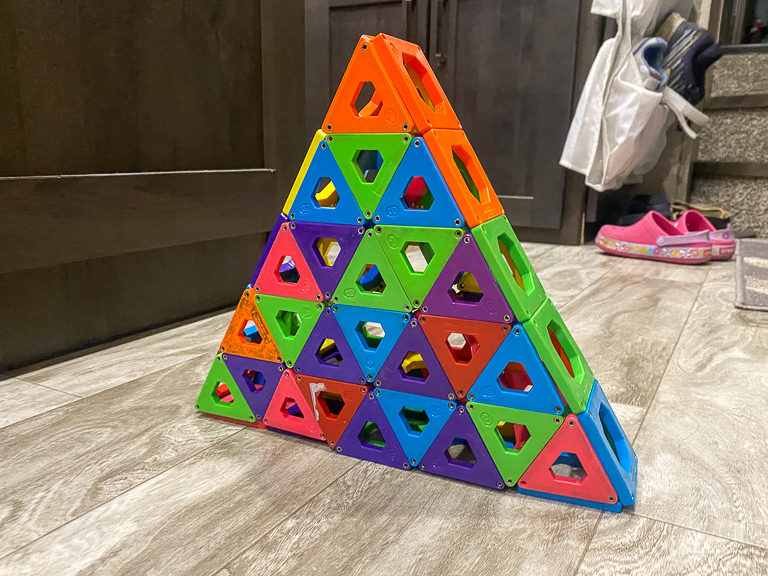 They love to make characters, especially from Nintendo. Alli making Bowser Jr and Kamek. I thought Kamek was done especially well with his red wand and red shoes. 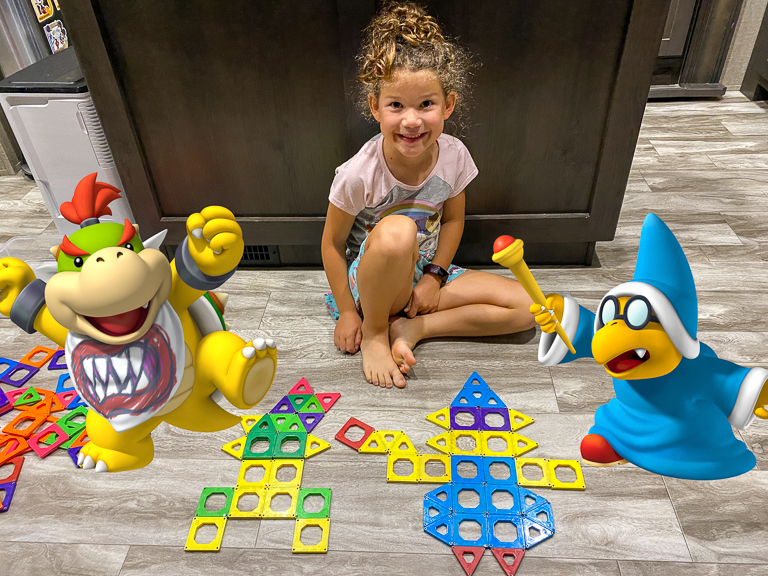 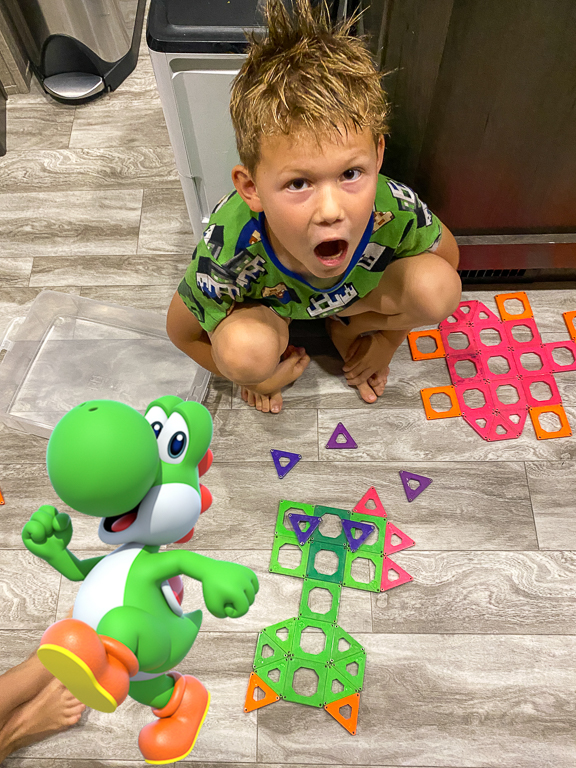 Then they both teamed up to make Princess Peach and Bowser, carrying her off to his castle.
Tomorrow is another travel day! We'll pick up again from there! 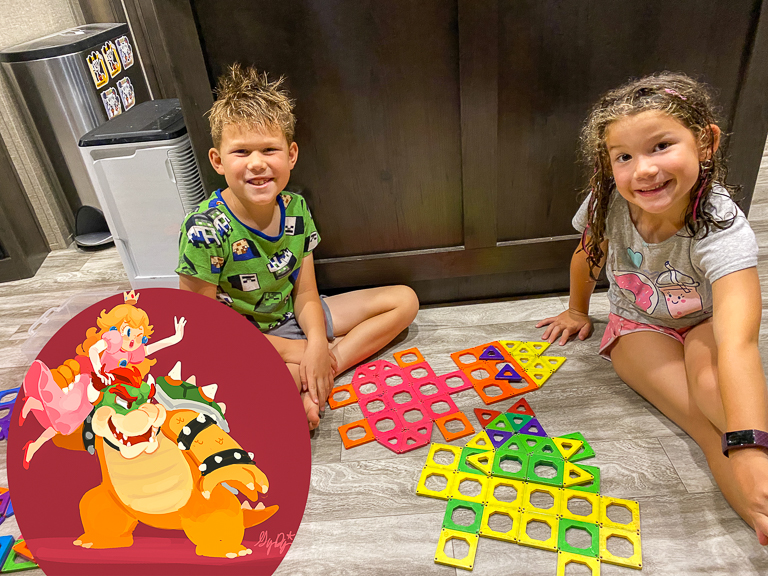