Our next meal we're going to attempt to make at home is Arby's! Of all the fast food restaurants we go to, I might like Arby's the most. But, we don't make it over to Arby's very frequently. It's just not convenient for us now. There's some very tasty things that we're going to need to make if we're going to try to recreate it at home. 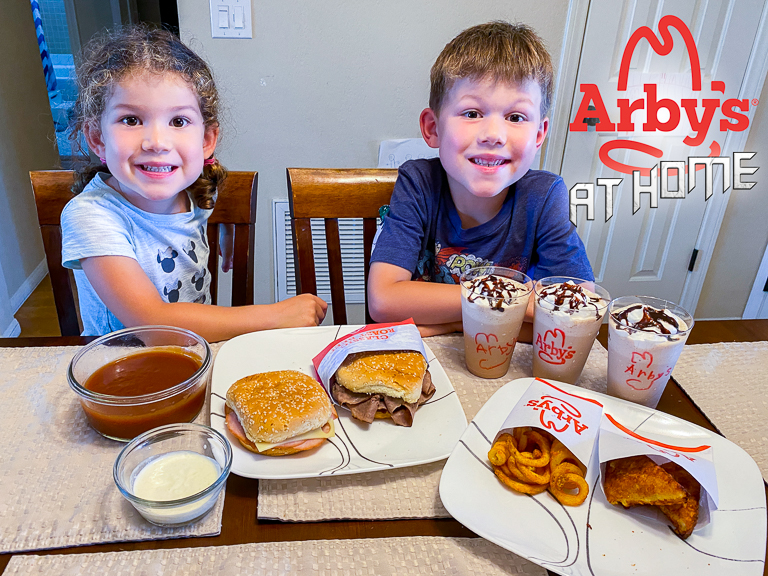 And it starts with the sauces. The day before we were going to have it, I whipped up a couple.
First up, you've got to have the classic Arby's sauce.
There's quite a few ingredients, but you probably already have them in your pantry. I based mine off of this recipe from cdkitchen.com for Copycat Arby's Sauce. Ingredients are water, vinegar, ketchup, onion powder, paprika, garlic, cayenne pepper, Worcestershire sauce, salt and brown sugar.

The recipe recommends using a blender to really mix everything together. Next it went into a saucepan to simmer for 20 minutes. Then I added a little bit of cornstarch and simmered for another 10 minutes. I gave it a taste and it didn't really resemble the Arby's sauce I remember, but we'll give it a day and see how it tastes tomorrow. 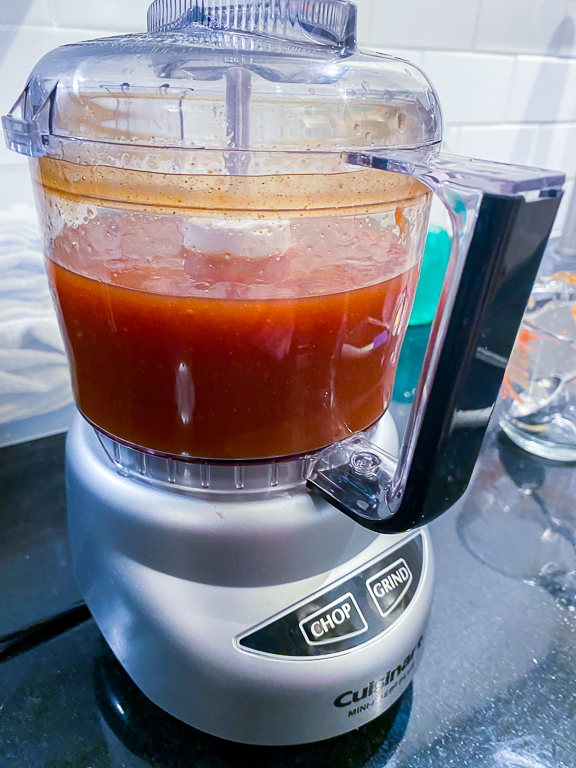 The other thing I really like with my Arby's is their horsey sauce. I didn't look for a recipe on this one. To me, it just tastes like mayo and horseradish 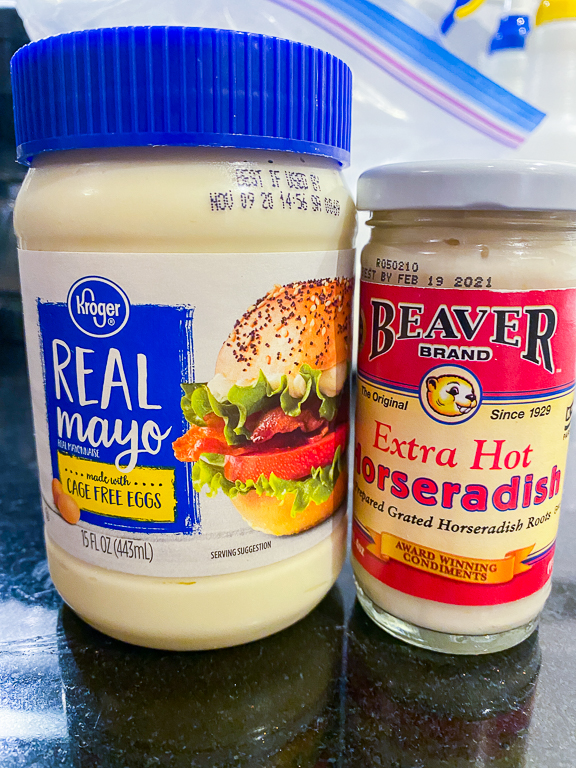 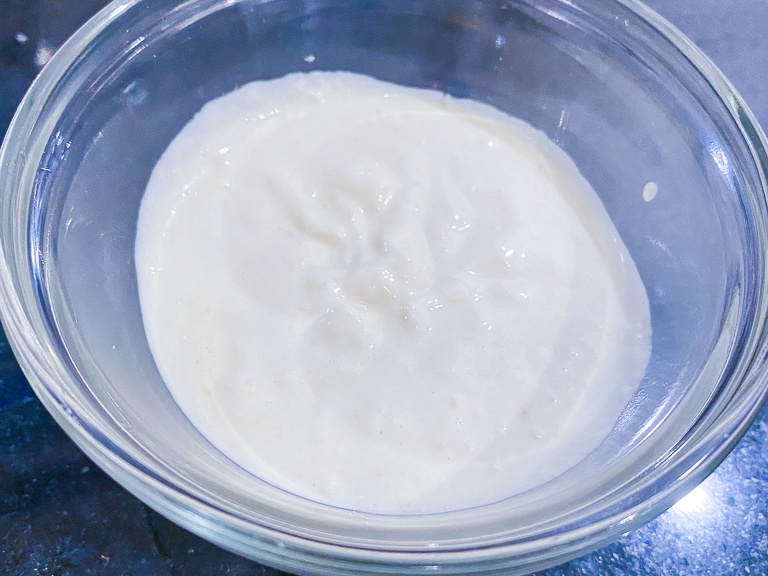 The Arby's curly fries are classic and Theresa already has that covered.
For me though, I like the potato cakes. They're a little different than the hash browns you might be able to find in the freezer section, so, I'll make my own. I thawed and mashed up some tater tots, added an egg and a little flour. I formed them into patties and stuck them into the freezer. 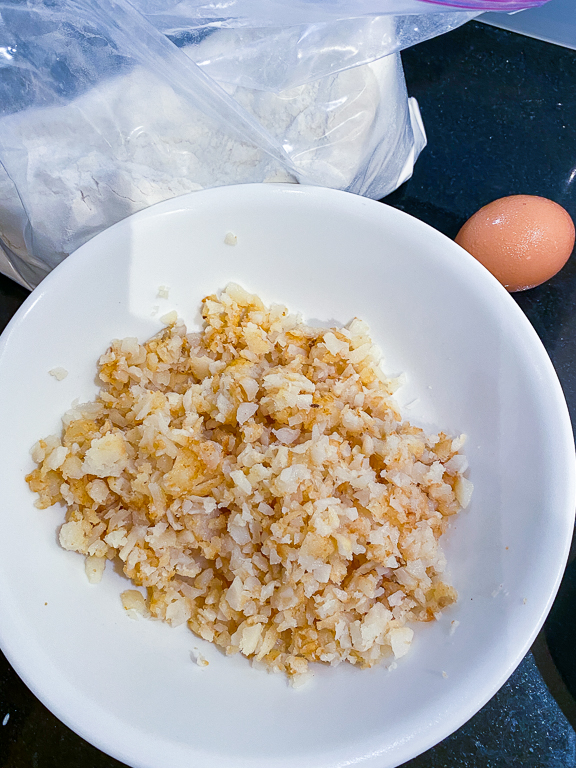 It's been kind of fun making the containers to go with what we're having. I've got to make a few things for our meal tomorrow. First, the curly fries container. I printed the logo on a white sheet of paper. Then taped it into a rough form. 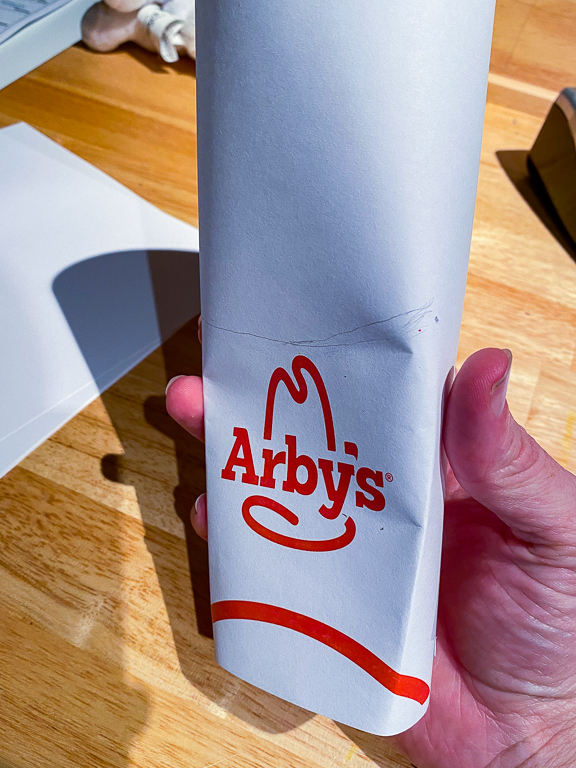 A few clips here, a fold there, and ta-da, looks like a container to me. 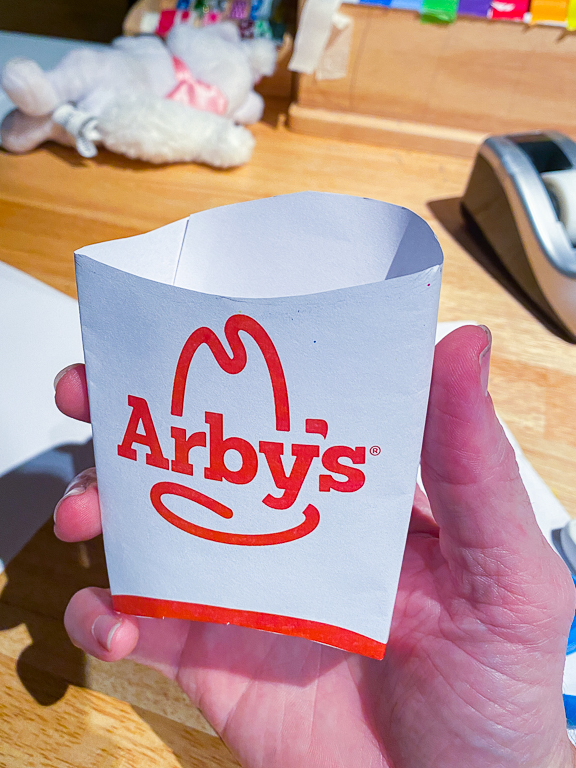 I also made a pouch for my potato cakes. 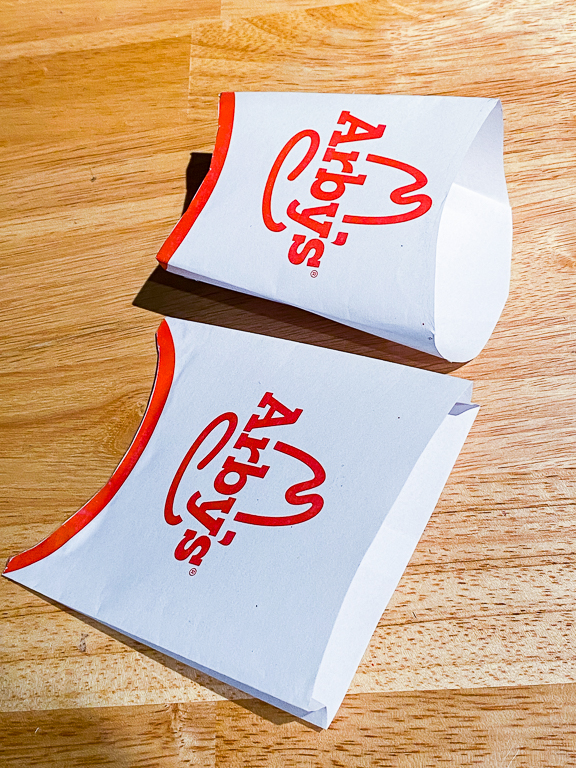 The next day, the kids helped me make cups. A little different than the ones we've used in previous days. These cups are clear. 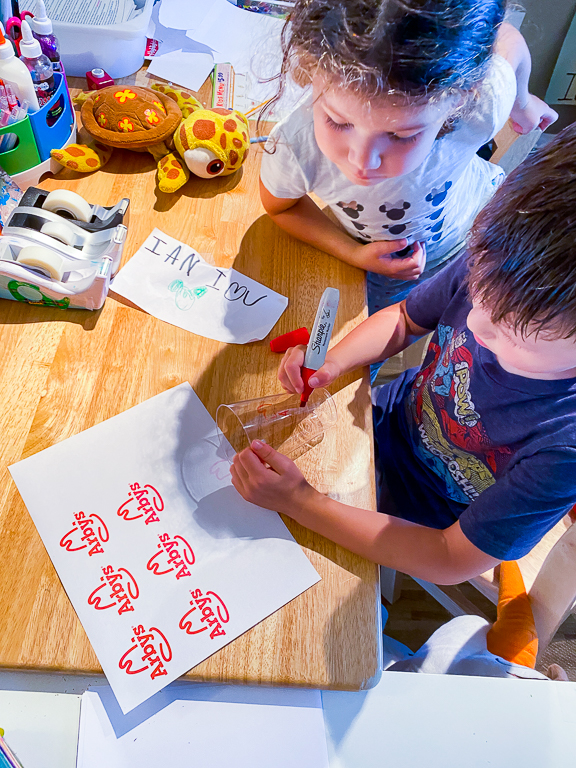 Alli make one herself. I printed out the logo for them to follow. 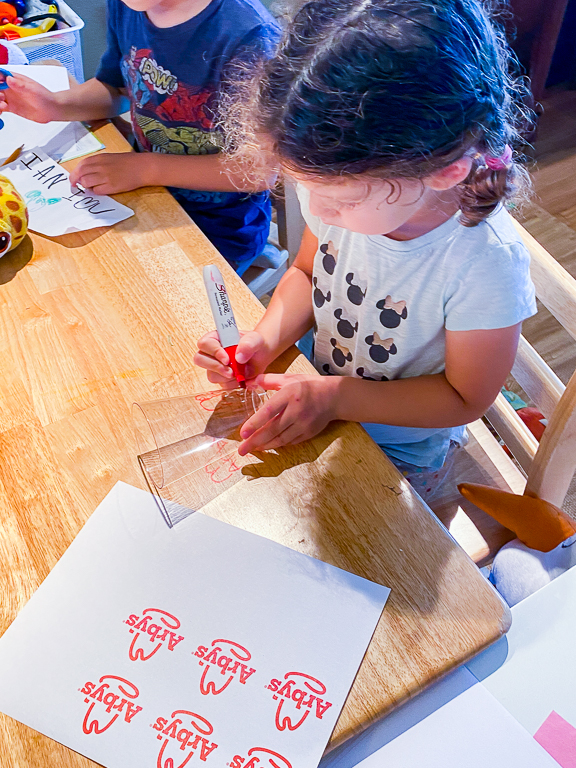 And we learned our lesson about using washable markers. Today they were extra careful with a sharpie, but it was a success! Nothing came off on our hands this time! 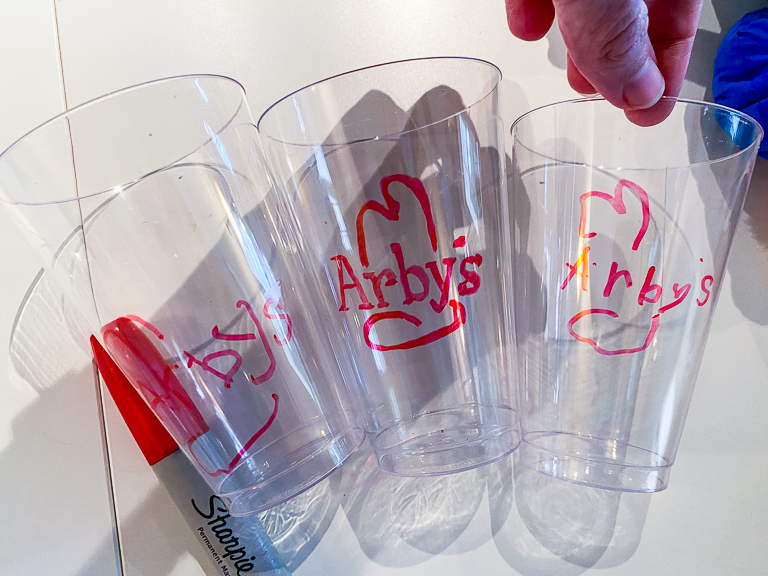 And here's why we don't need to worry about curly fries. Theresa found these available from our local Ralphs online! 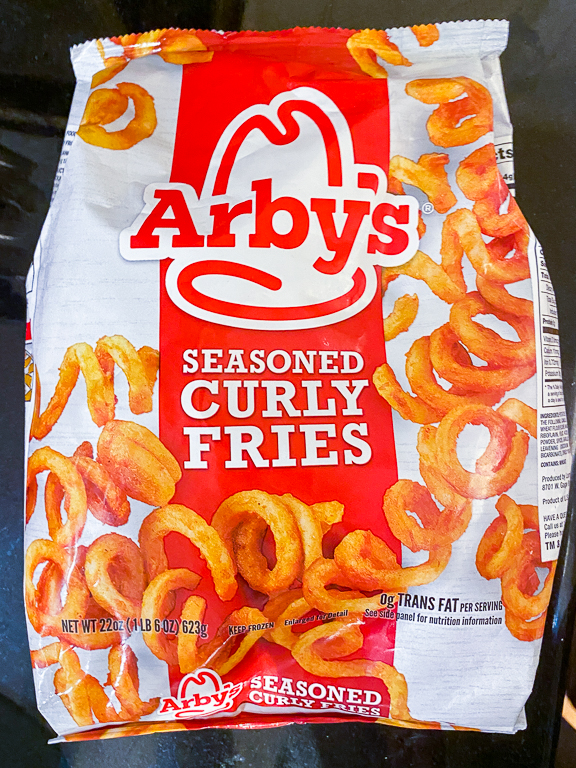 The meat needs to be warmed, and the best way we found to do that was to make some beef stock and bring the temperature up that way. 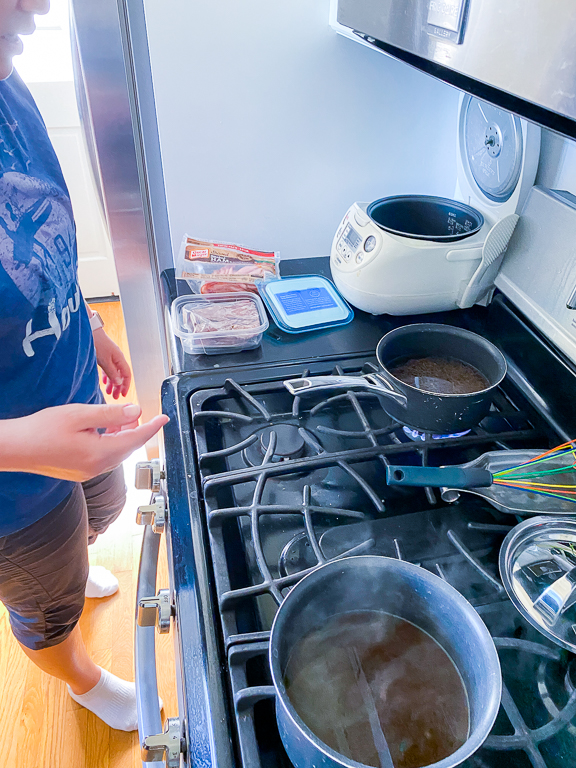 Ian helped butter some sesame seed buns before they were toasted. 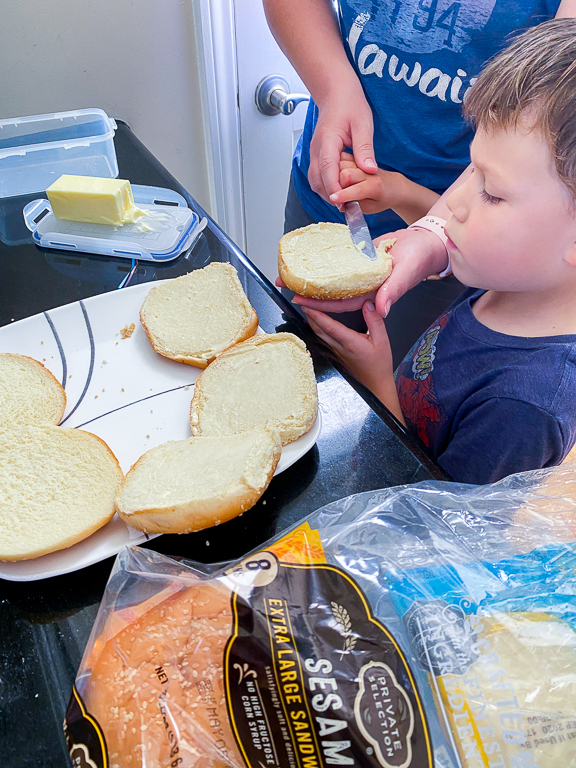 And there's one more thing that I just HAVE to have if we're at Arby's. Their Jamocha shake has been a favorite of mine for as long as I can remember. A long time ago it was just milkshake out of a machine. But these days, it's a little fancier. It's topped with whipped cream and chocolate syrup. Ian helped me mix up sugar, vanilla, and heavy cream into some homemade whipped cream. 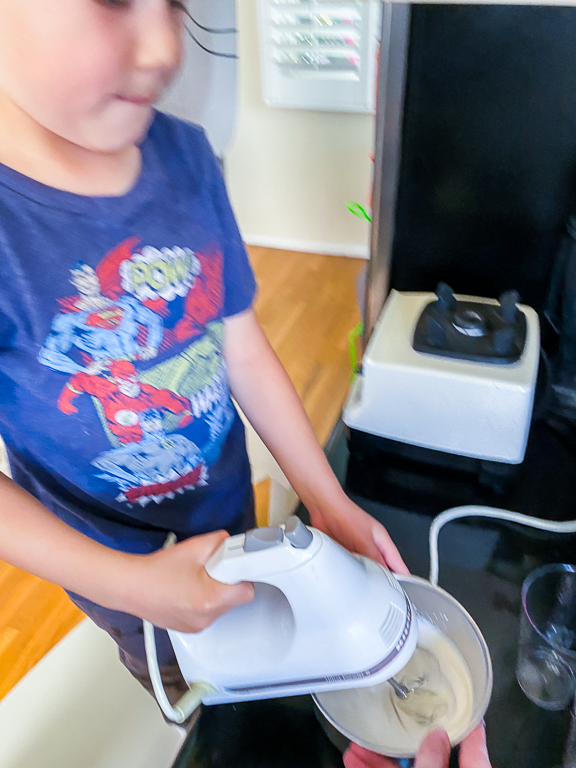 And then in the blender the kids helped me mix up cold coffee, milk, vanilla ice cream, chocolate syrup, and sugar, using this recipe from Top Secret Recipes for an Arby's Jamocha Shake. Awesome! Looks delicious! 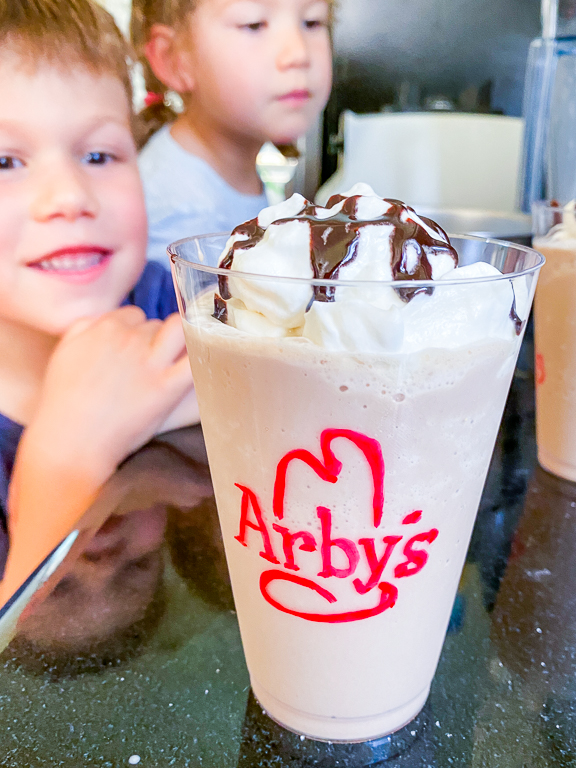 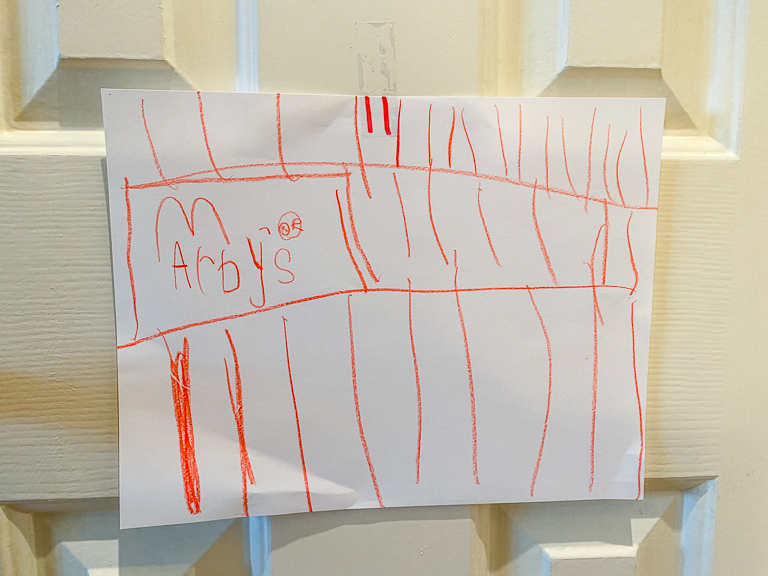 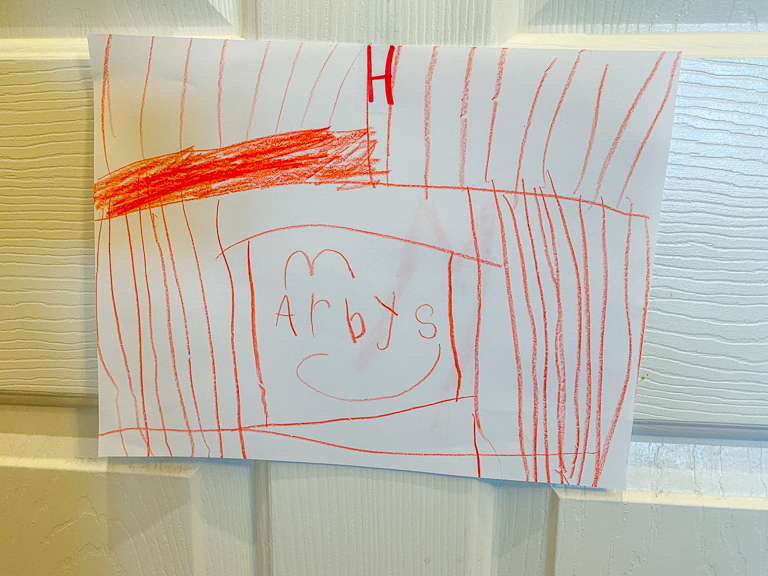 Let's eat! Along with the roast beef sandwiches, we're also big fans of the Ham & Swiss Melt. And those are pretty big containers of sauce too. I hope they're tasty. 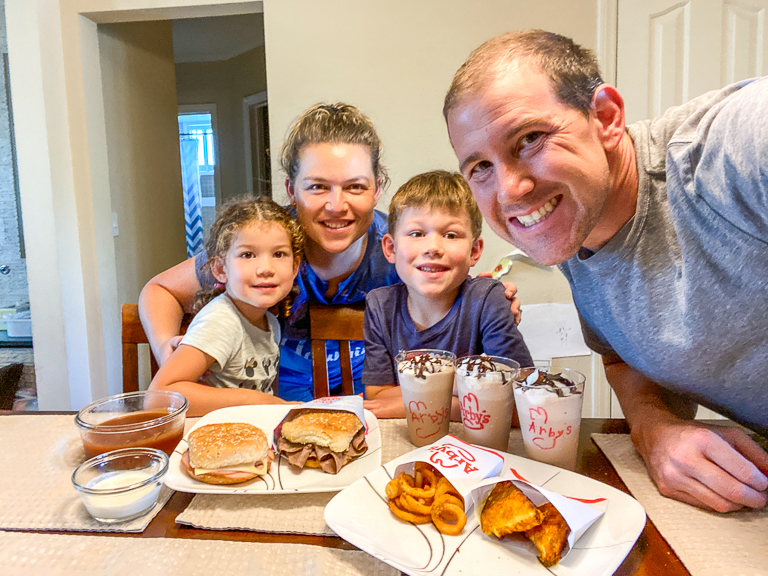 My dinner tonight. I made wrappers for the roast beef sandwiches. 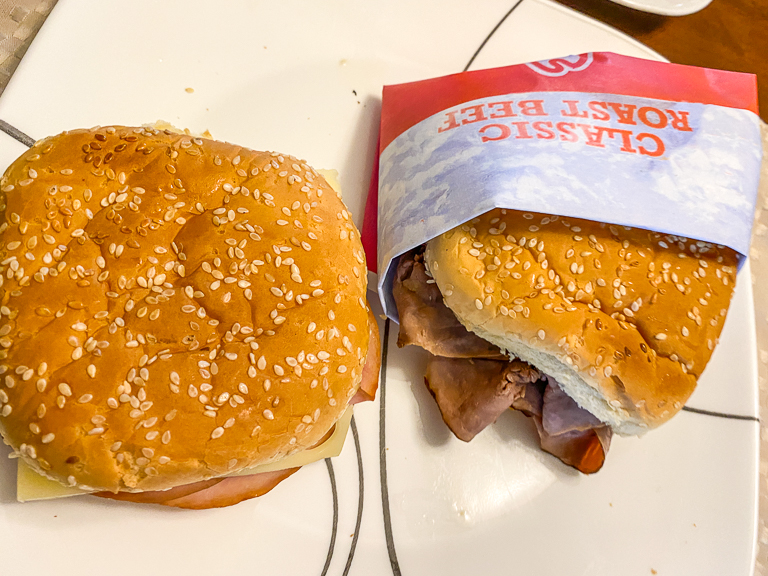 I added a bit of Arby's sauce and Horsey sauce to my sandwich and it was complete.
I have to say, a day in the fridge did wonders to the Arby's sauce. It's a really good approximation of the real thing. And as for the sandwich itself, it was great! Just as good as the real thing. 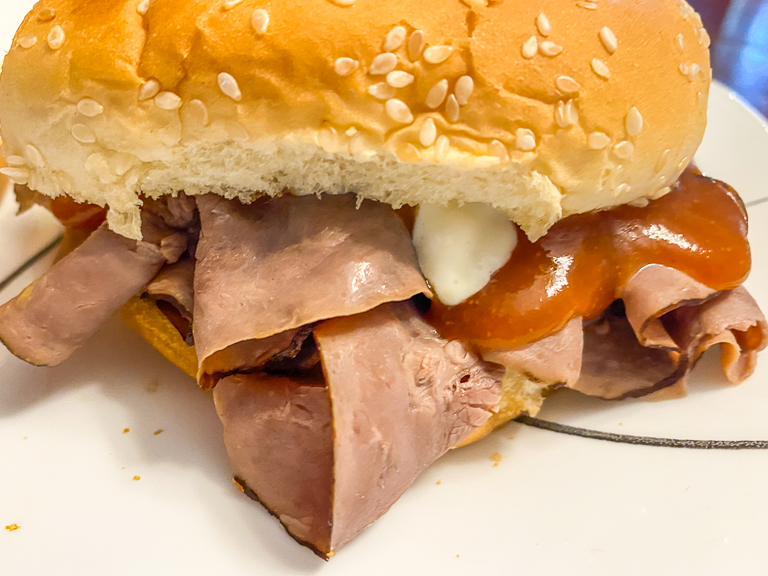 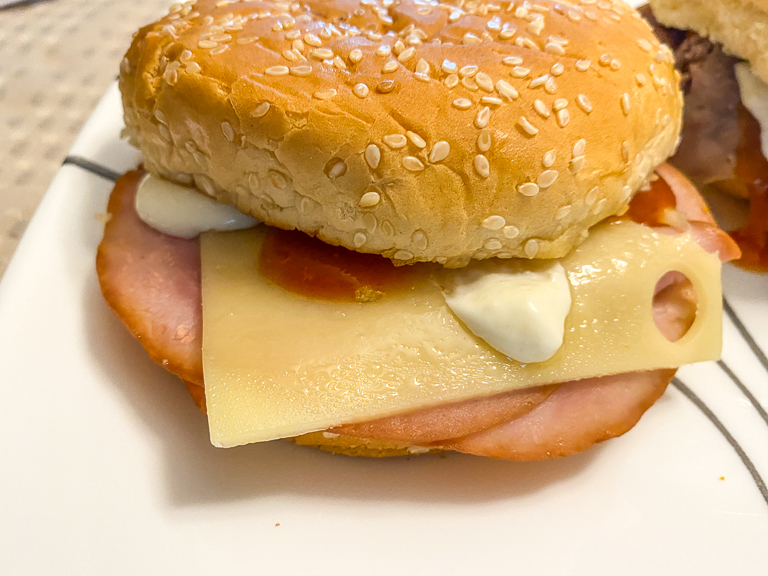 The curly fries were pretty delicious too. I love dipping them in Arby's sauce, so it was just like being at the restaurant. The potato cakes I attempted to make weren't as "fluffy" as the real ones, but I was happy to have them anyway. 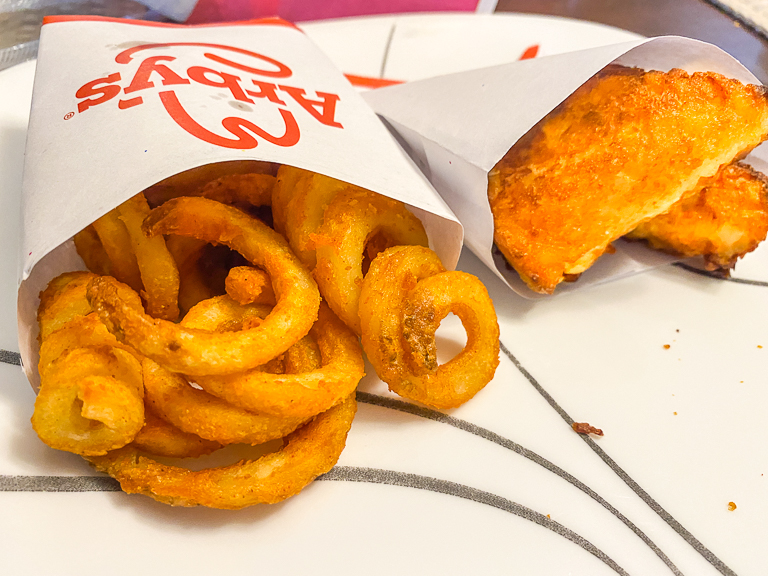 The kids had fun with our Arby's day. They are loving the curly fries, searching their plate to find the biggest one they could. 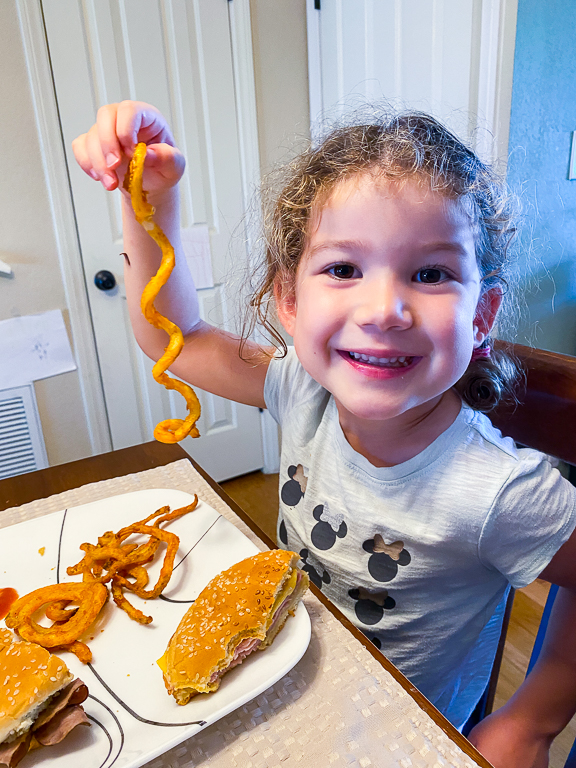 The kids had their favorites. Both loves the fries. Instead of swiss for their ham sandwiches, they opted for cheddar, effectively making it a Ham & Cheddar. The Jamocha shakes were delicious, and they found out that they LOVED the homemade Arby's sauce. 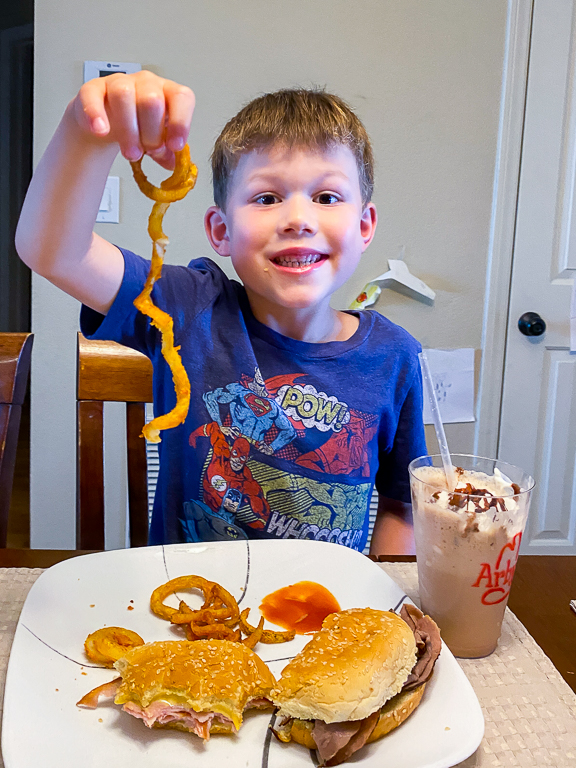 And I thought the Roast Beef sandwich was great! I could pile the roast beef as high as I wanted. There were lots of parts to it, but this was a great meal to make at home! 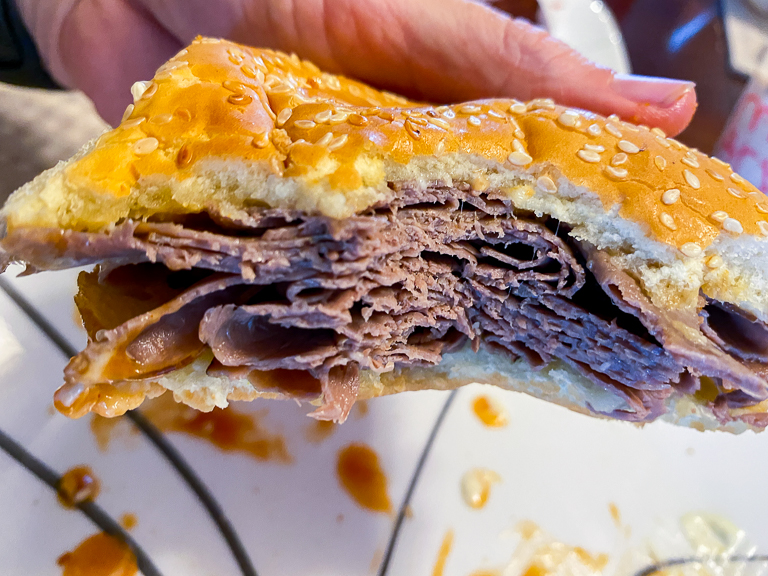