Today we're moving away from the homemade fast food and moving into the homemade sit down restaurant food.
Olive Garden is a big favorite, so much so that both kids choose to eat their birthday meal there. We always order the same thing when we go. Pasta e Fagioli and Fettuccini Alfredo. I think we can take a swing at making this ourselves. 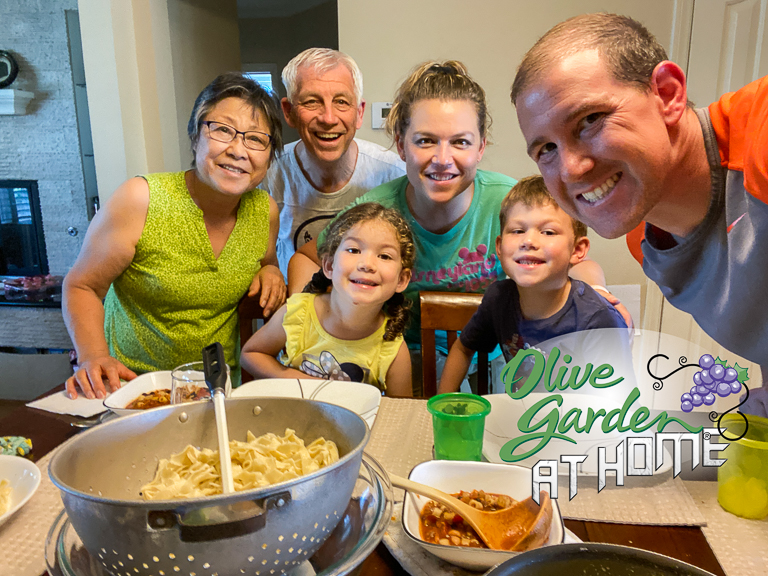 And if we're going to do this, then let's really do this. No boxed pasta. Some of the best pasta I've had has been homemade, so I'm going to make it all myself. The recipe is simple, just 5 eggs and 4 cups of flour. I'm using this recipe from epicurious. 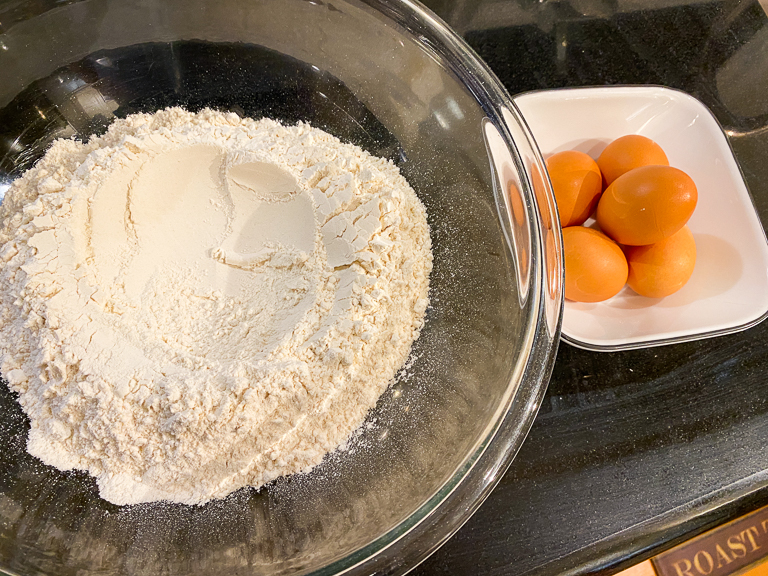 You crack the eggs into a bowl you make out of the flour and then you start mixing together. First with a fork, and then as it starts to pick up more flour, with your hands. Time to knead! 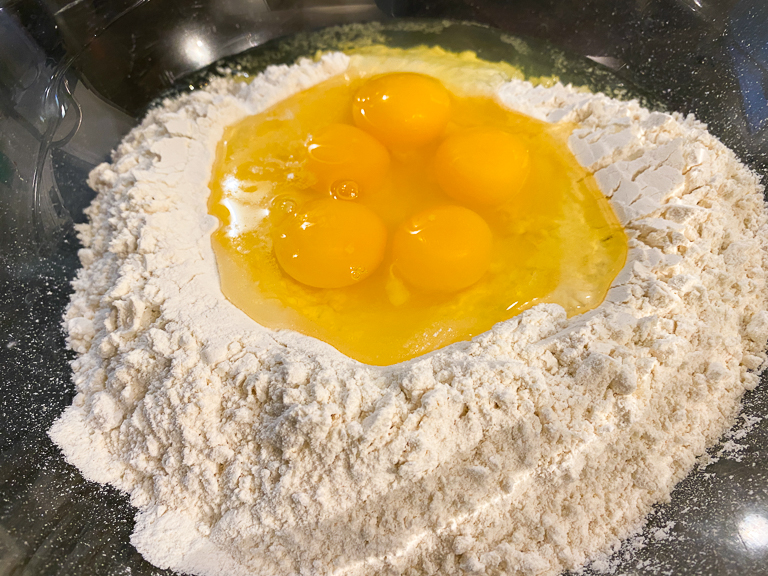 Wait. What does that recipe say? Knead the dough for 30 minutes!?! Oh my.
It suggested skipping the gym and doing this instead. Well I did say "then let's really do this" so yes, I certainly did stand there for 30 minutes kneading this pasta dough. That's a bit of sweat on my brow towards the end there. I think I need to invest in a stand mixer with a dough hook. 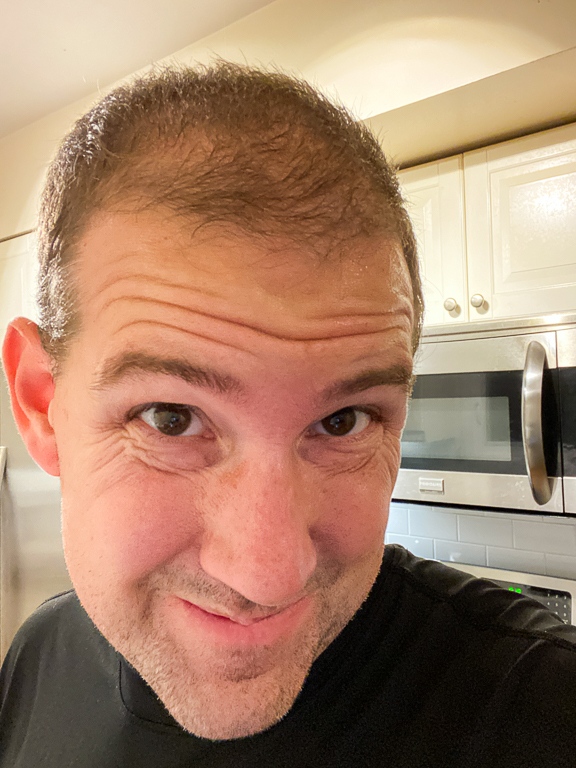 Thirty minutes later, this is what that dough looked like. I wrapped it in cling film and tossed it into the fridge for 2 days to chill out. 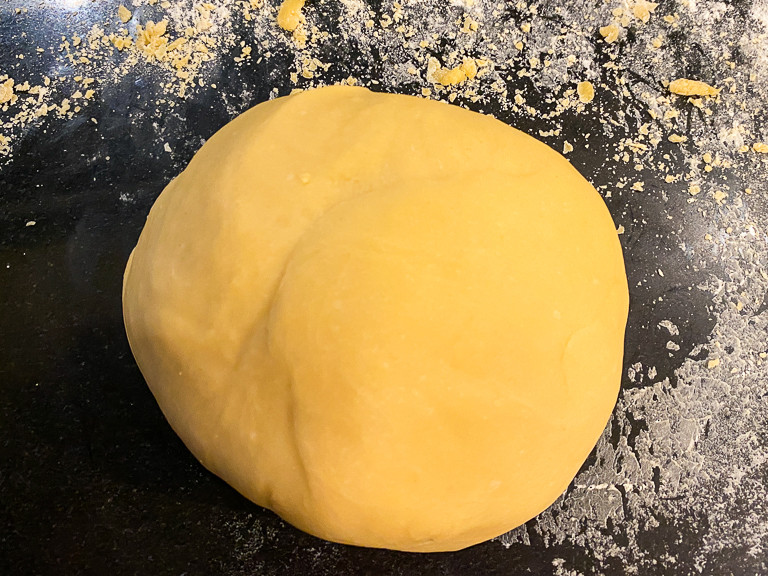 Fast forward two days, it's time to make the pasta. After letting the pasta sit out for a while on the counter top and coming back to room temperature, it was time to roll out the pasta. Theresa and I bought this pasta roller back in college, and we still bring it out occasionally. In all those years though, some of the pieces have gone missing, namely the clamp that holds it to the counter, and the crank for turning the rollers.
Last time we made pasta was for National Noodle Day and then we used kitchen sheers to turn the crank. I'm moving into the industrial age and bringing some electricity into this process. A spade bit and my drill make this whole process a lot easier. 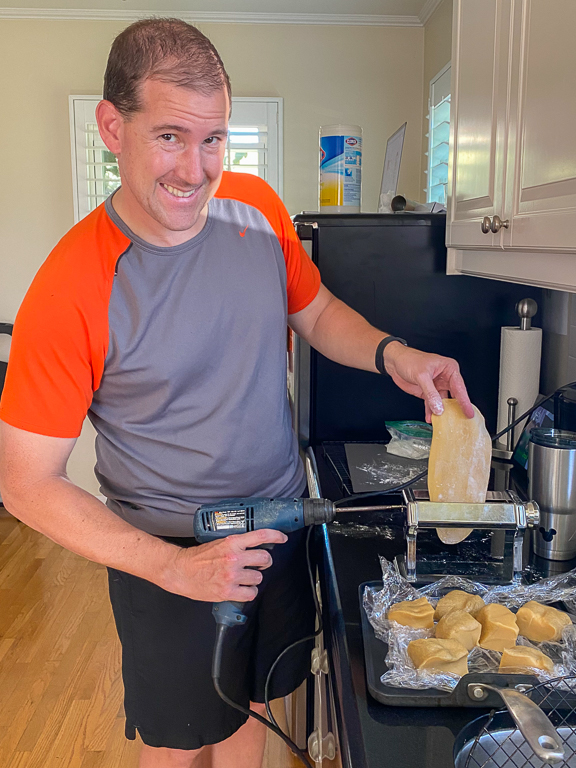 Chi walked in on me making pasta this way and thought that it was just the funniest thing.

Afterwards, I dusted the sheet of dough with flour, folded it on itself a few times, and cut the noodles by hand. One more dusting of flour and they're good to go. Just a few minutes in boiling water and these will be done. 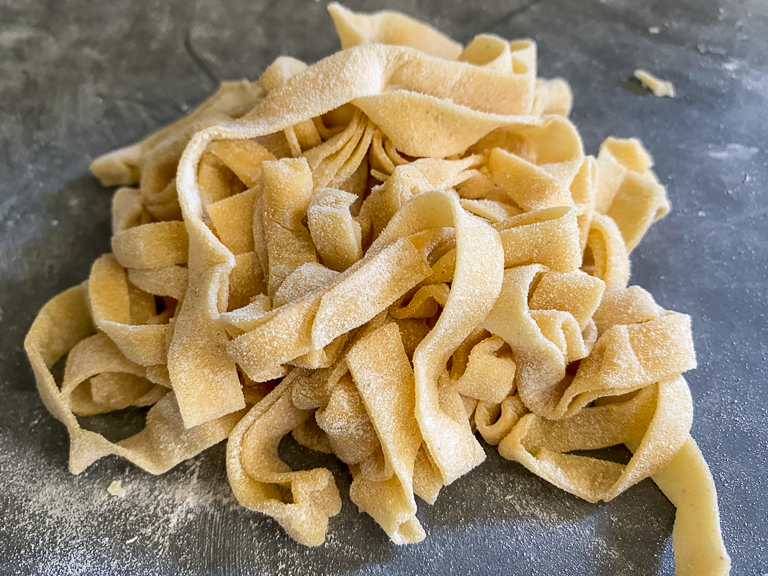 While I've been busy making my pasta, Theresa has finished up her homemade Pasta e Fagioli recipe.  It's one of Alli's favorite soups ever.
And it's been years since we've made our own alfredo sauce, generally using what's easy to get from a jar instead. But today is a day for something special. Theresa followed this recipe from Top Secret Recipes. 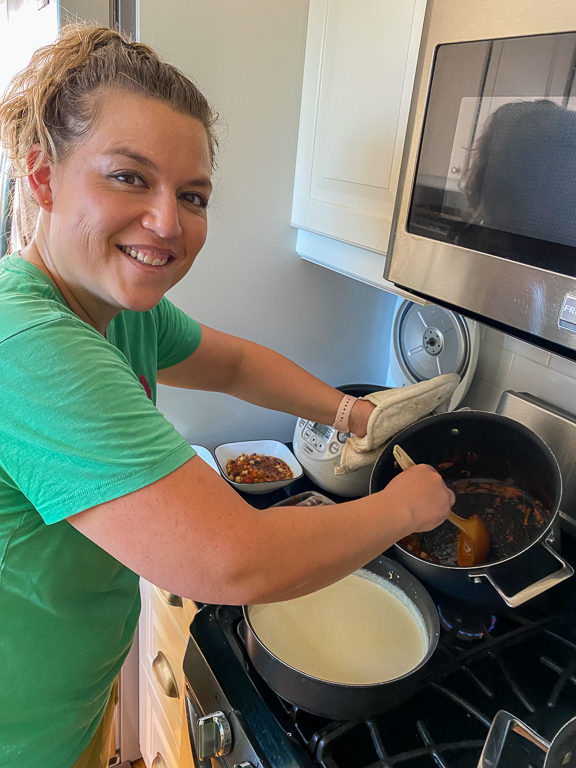 Could have made our own breadsticks too, but with yeast in short supply decided to skip it. She thought they came out of the oven a little overcooked. Well then that'll be exactly like Olive Garden then. They always overcook their breadsticks too.

Look at that. That's a delicious looking meal. 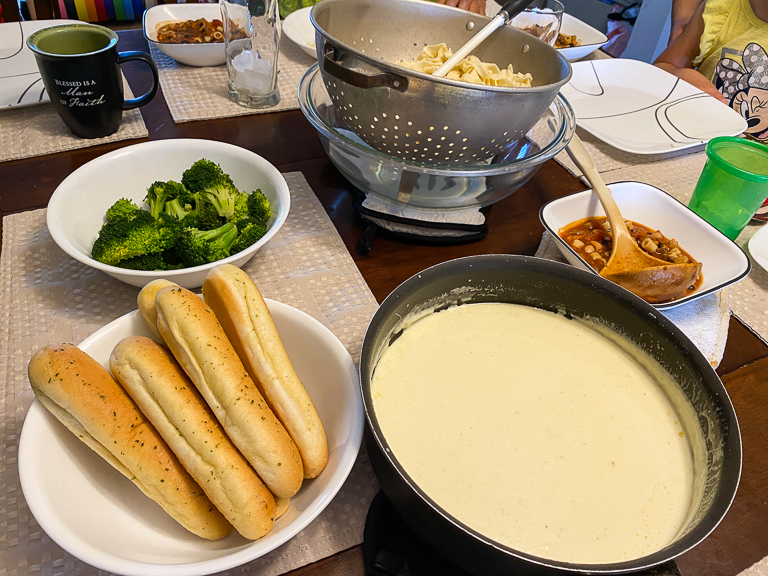 The alfredo sauce and pasta were soooo good. I told Theresa I liked it even better than Olive Garden. There's times when something is so good that you just keep going back and getting more, despite already feeling full. This was one of those times. I had thirds! 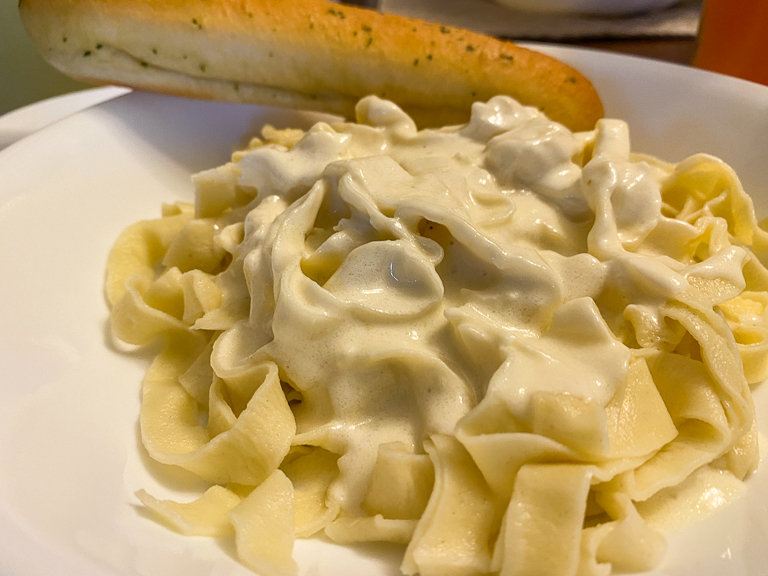 And Theresa has been making this Pasta e Fagioli soup for years now and she's got the recipe down. 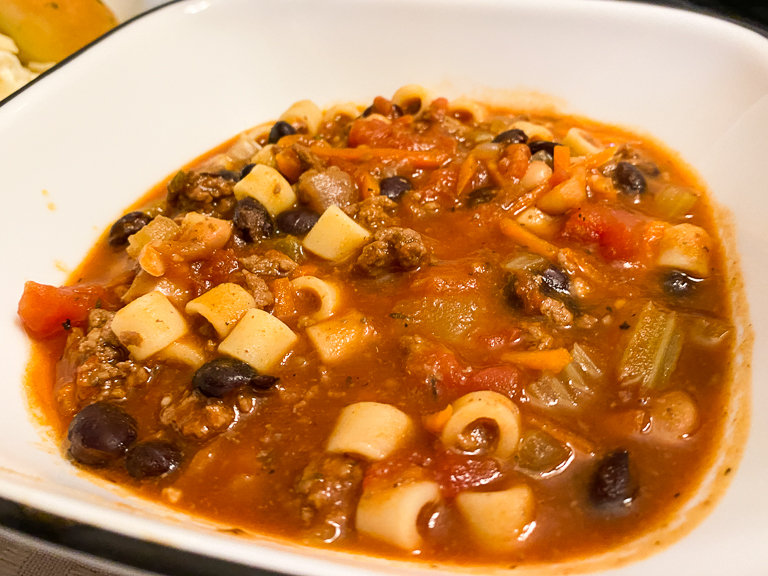 Can't forget about our special drinks either. 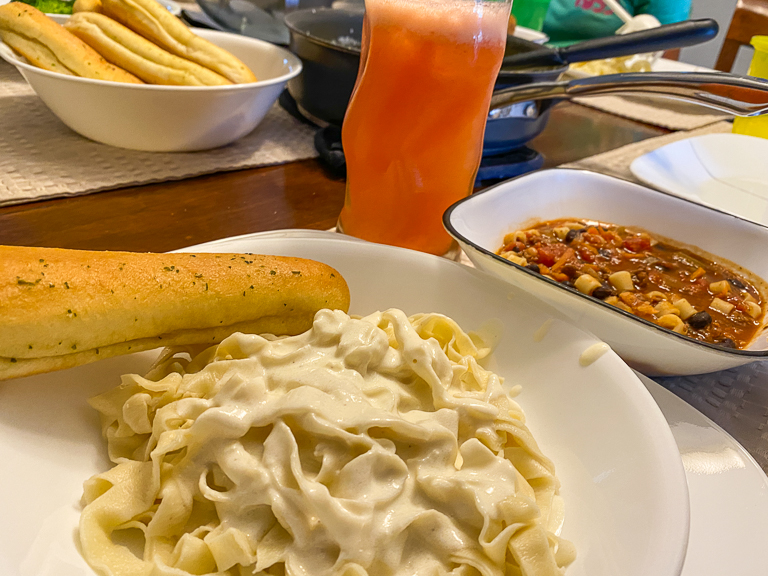 I hardly ever buy a beverage when we're dining out, but the one exception I'll make is if someone has a tasty lemonade. Olive Garden makes a pretty good raspberry lemonade. I'm going to make a strawberry lemonade. Just like the Chick-Fil-A lemonade we made earlier, we used 3 pucks of frozen lemon juice, added water, and sugar. This time though, I grabbed 12 ounces of lemonade and a 1 1/2 cups of frozen strawberries. I put everything in the blender until it was super smooth with no chunks big enough to get stuck in a straw. The end result was delicious. 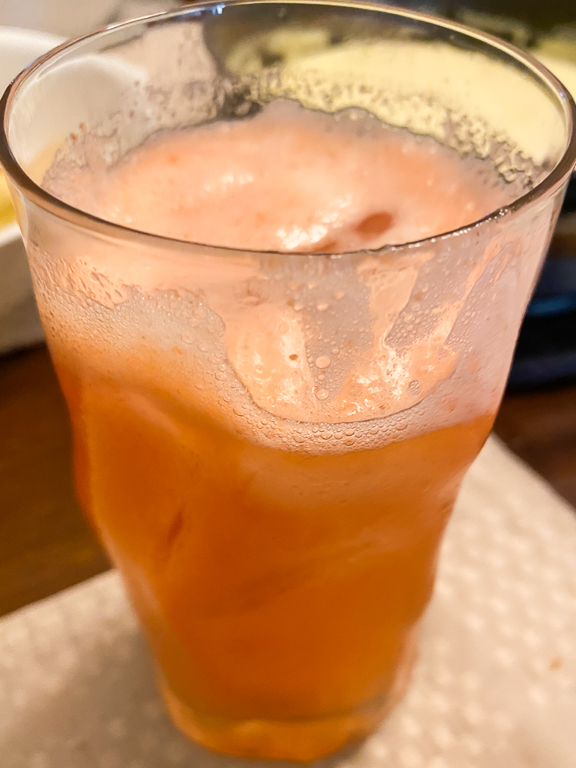 Does Olive Garden top theirs with parsley flakes? I don't have that right now, so how about some pieces of broccoli. Brighten up the color of the dish a little bit. 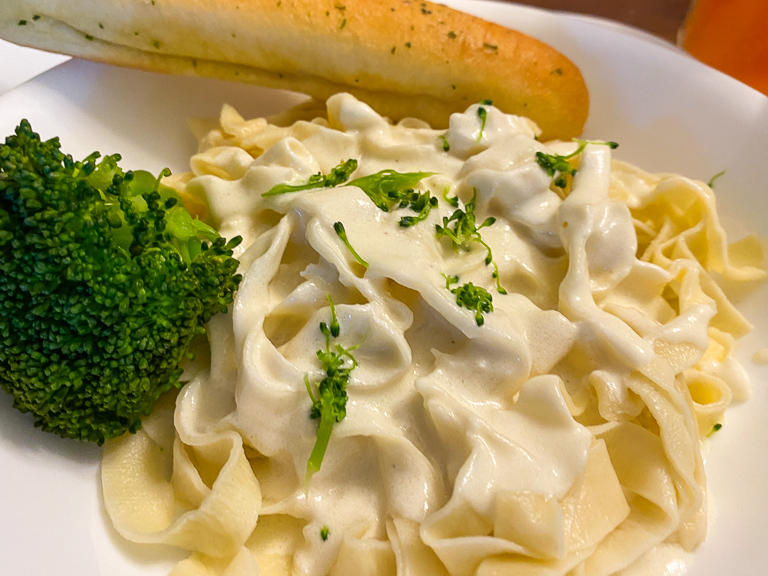 What did the kids think? Well first they said that it feels just like we're at Olive Garden. I like their old slogan. "When you're here, you're family." We're certainly enjoying it all as a family.
Alli could eat this soup all day, every day. It's her favorite. 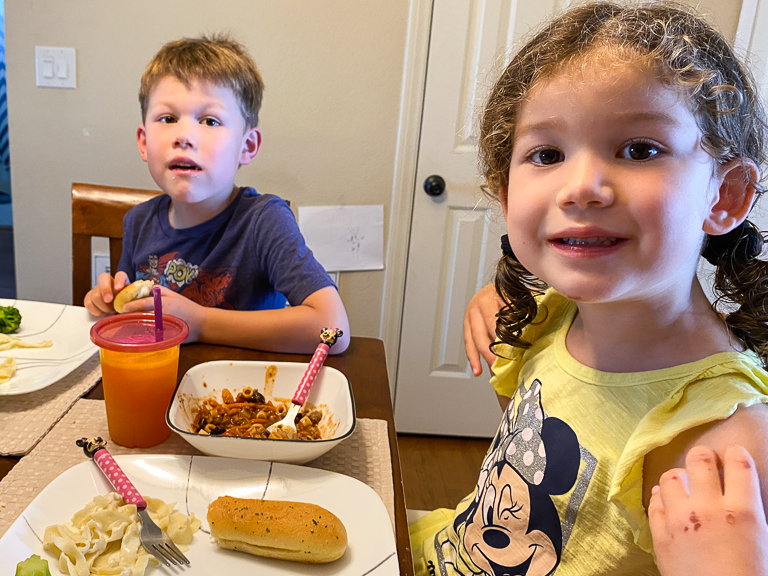 And the pasta, I wasn't the only fan. Everyone thought it was delicious. 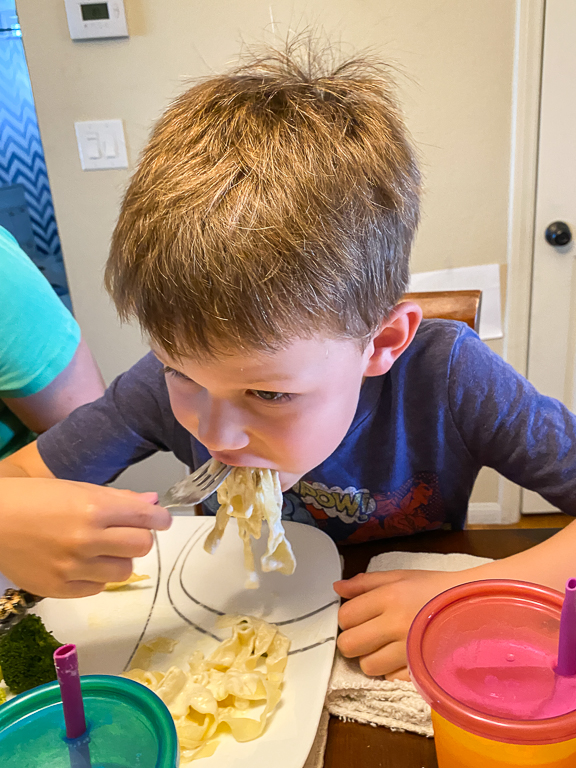 Including this little boy who NEVER asks for seconds, but today, did. He loves noodles and white sauce. 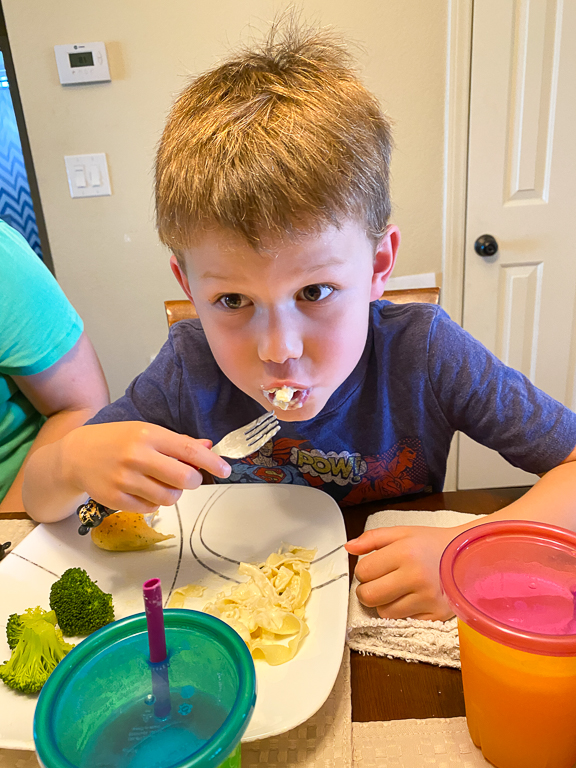 For dessert, what else could it be? It's gotta be Tiramisu (conveniently left-over from our Oreo Tiramisu taste test). 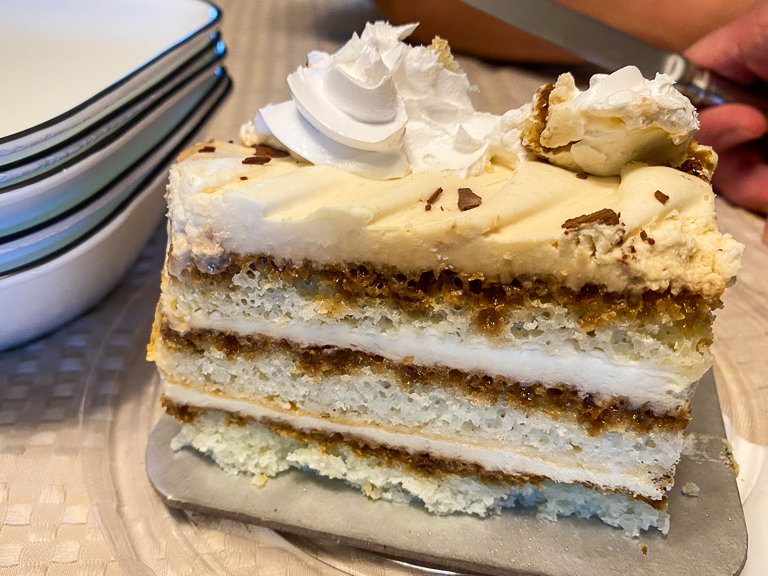 And as we were parting, instead of the traditional Andes mint that Olive Garden would give you, Theresa made sure everyone had a Peppermint Bark Dove Chocolate as a sweet treat to finish off their meal. 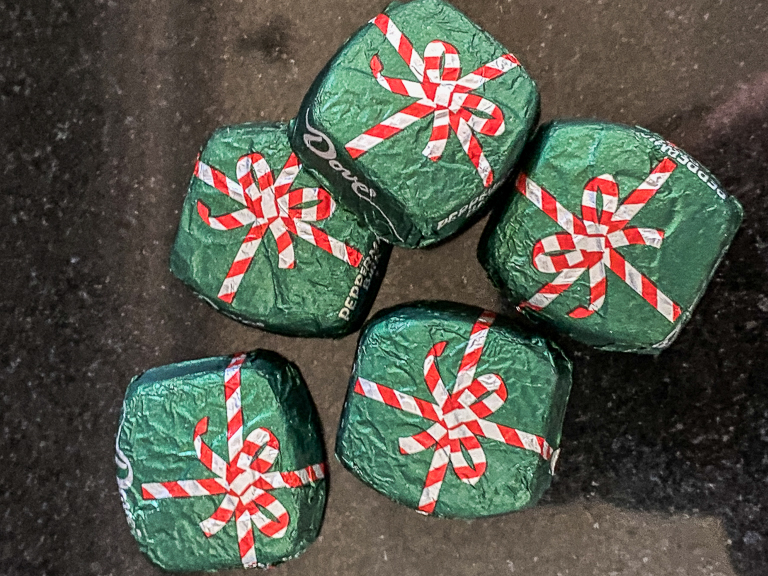 Today's meal was delicious! I think this might become part of our regular meals.
Posted by Joe at 5:00 PM