Twas the night before Christmas.

It's been a very busy week leading up to Christmas (more to come on that in a future post) but for now, the Michigan families are visiting us in Florida and we've all rented hotel rooms at the beautiful Hyatt Regency Grand Cypress in Orlando.

And even though we're in a hotel room, that doesn't mean we can't decorate it a little bit for the holidays. Our mini Christmas tree, all Alli's ornaments, and our Christmas stockings all made the journey to help spruce up the room for Christmas. 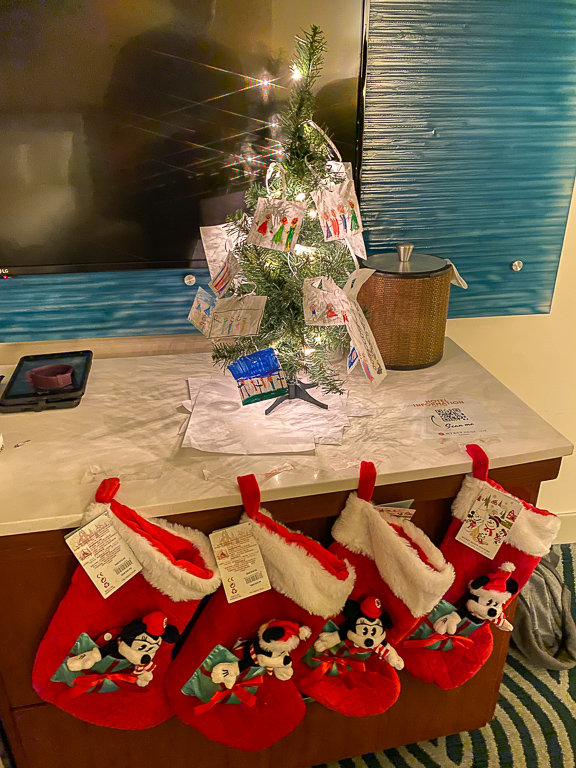 The children were nestled all snug in their beds. And they were wondering if Santa would still come to visit them, even in a hotel room away from home. 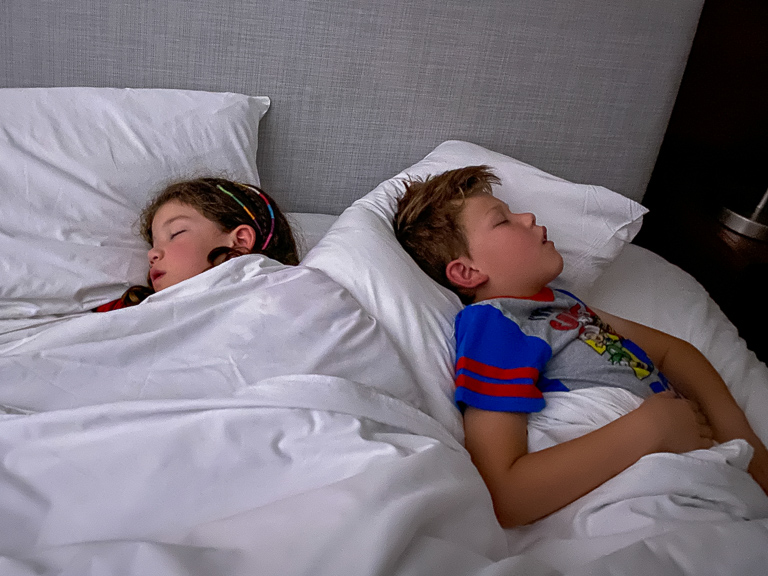 When Ian woke up, he went right to the stockings and said "He did come!"
Our Christmas celebrations have been spread out a bit this year, first celebrating in Colorado after Thanksgiving, then a little earlier this week in the rental house, and now finally today on the actual Christmas Day. Stockings only get filled by Santa on Christmas, so the kids were happy to see what he brought them. Santa must have been listening to know that they wanted giant suckers from Disney World. There was also a random assortment of things like Kinder Eggs, a bottle of Gatorade, and even a new bike bell since neither of their bikes came with one. 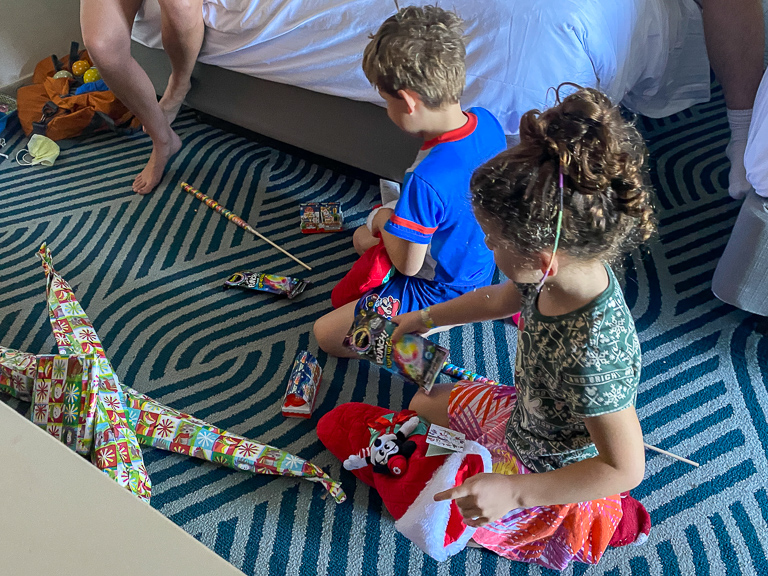 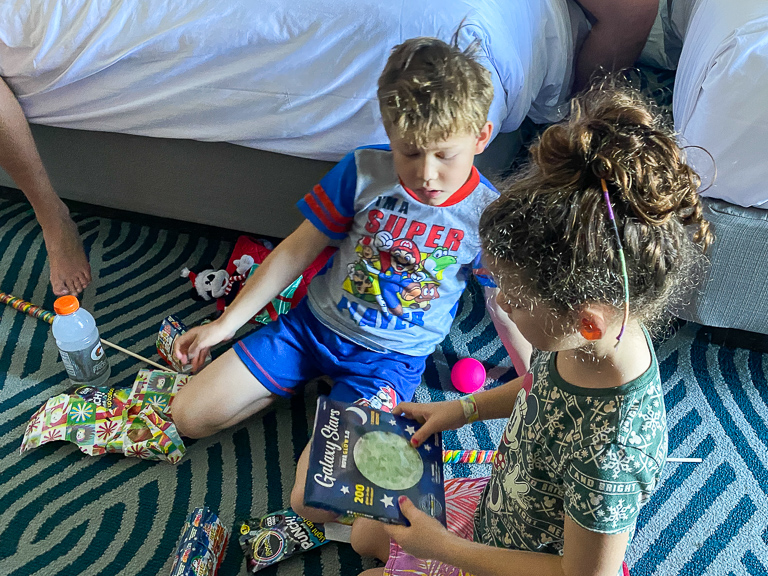 Ian has been asking for this last gift ever since we left Michigan earlier this summer. He loved going fishing with his cousins, and more than anything he wanted a fishing rod for Christmas. 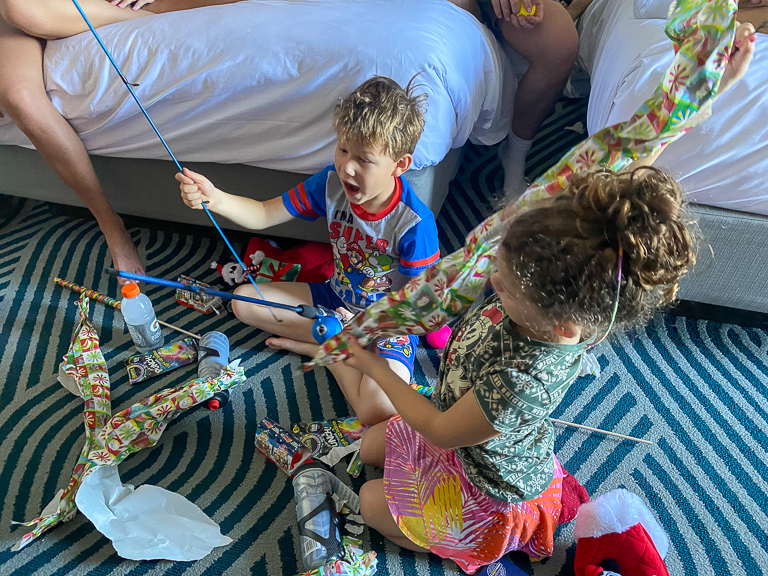 Alli had a lot of fun fishing too, and we even found a purple rod! We'll have to figure all that out before we hit the road again next year. Do kids need a fishing license in each state? 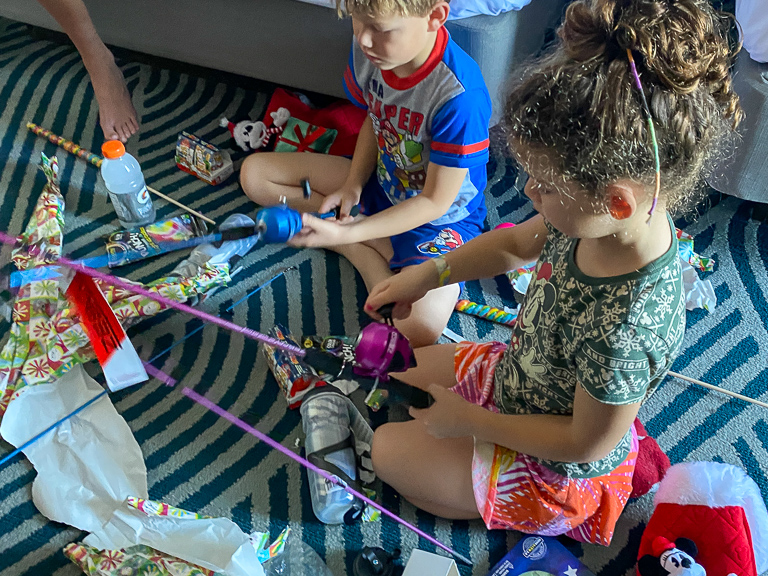 Looking outside, it's shaping up to be a beautiful day. Not too many clouds and temperatures are in the 70s. 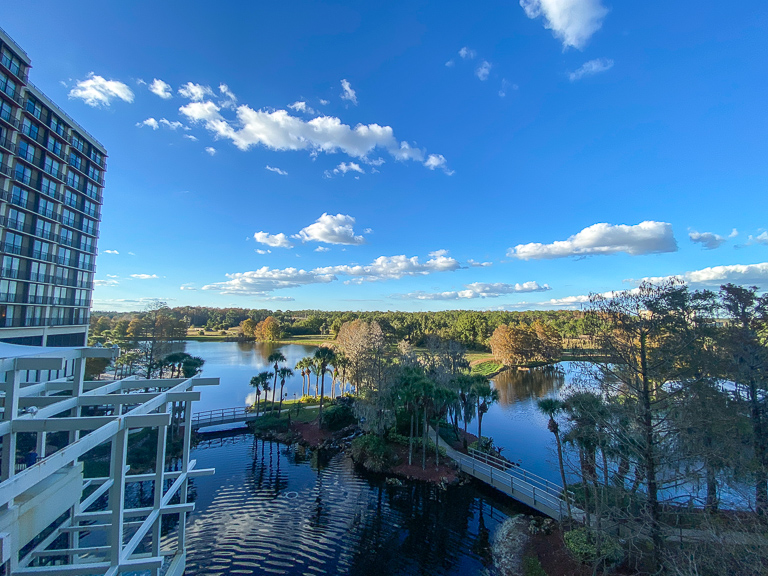 The Grand Cypress has a beautiful pool and sandy beach area. I was surprised things weren't all the crowded. We were able to find chairs even after showing up late. 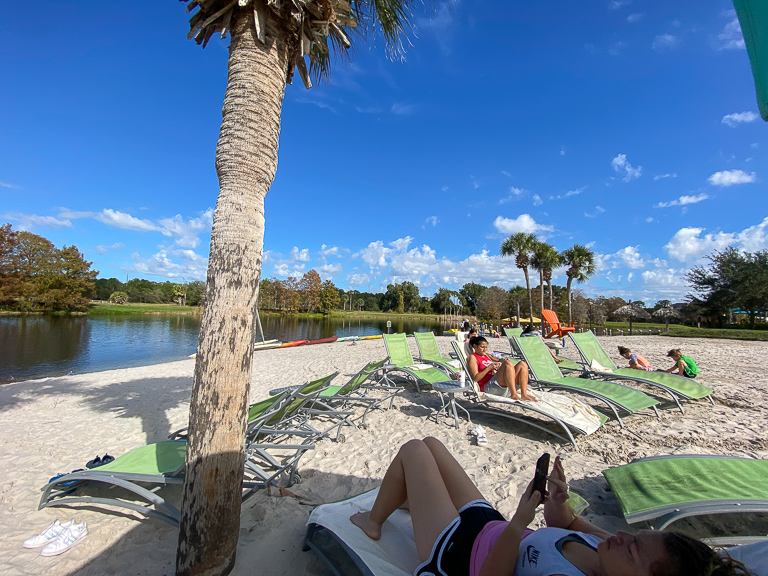 The hotel knows that people are traveling for the holidays and still want to celebrate Christmas. They've organized quite a few activities throughout the day for anyone who wants to participate.
The kids were excited to see another Candy Kiss Count. We did so good with winning the candy guessing game in Hershey Pennsylvania, they really wanted to win again. We studied and shook and all put in our best guess for the amount of kisses that were in the jar. 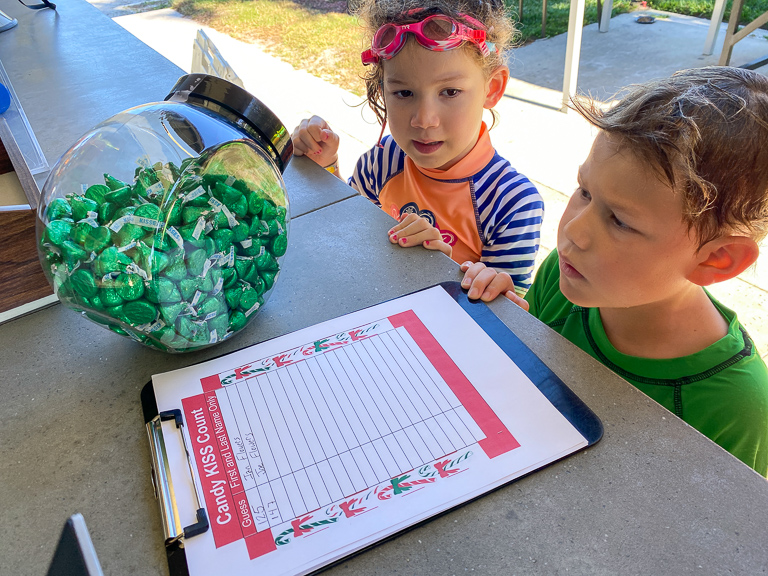 Next the hotel gives out slices of bread and invites you to feed the fish in the lake. 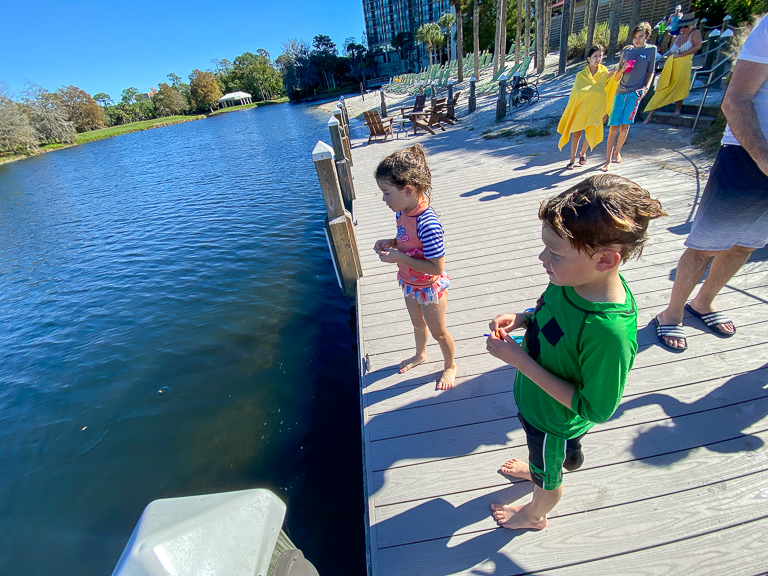 There was so much bread floating in the water and no one saw a fish. The birds sure were interested in all that free bread though. It might have been intended for the fish, but all the guests started feeding the birds instead. 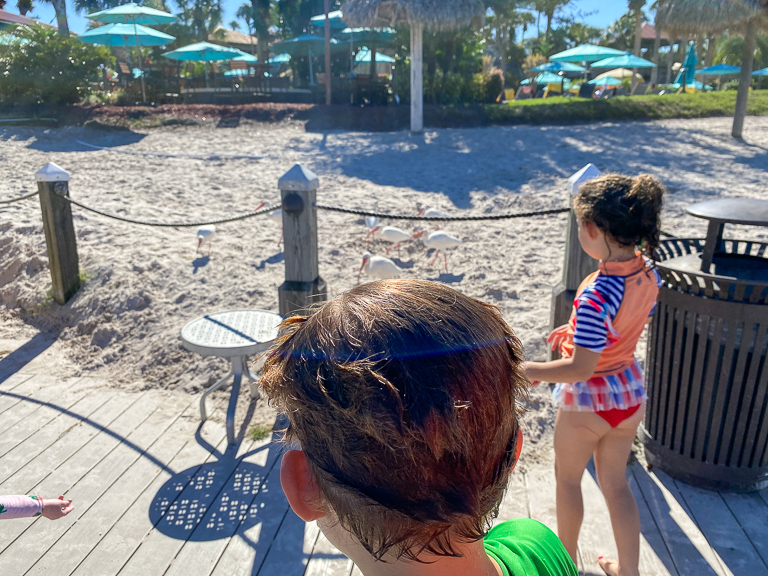 Time to cool down with a nice frozen drink. 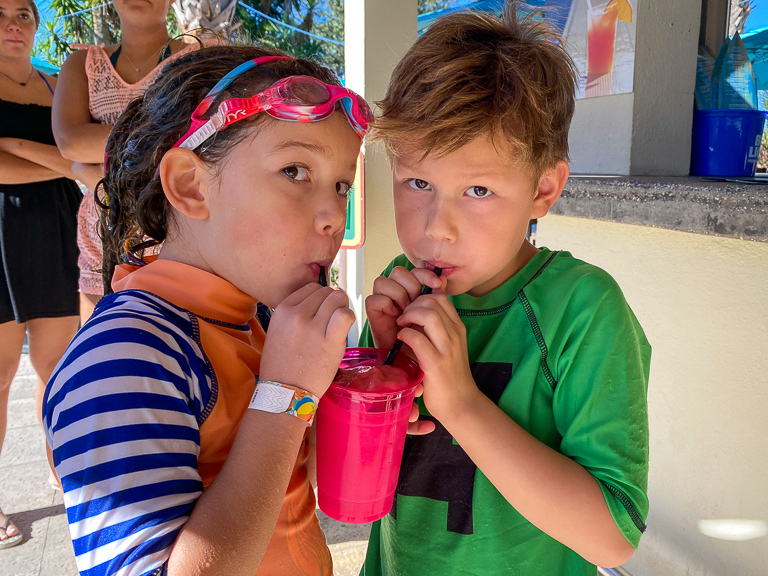 Inside the lobby, the guest activities crew has set up a sugar cookie decorating station! They provide the cookies, frosting, sprinkles, and even a bowl full of Nerds to use for decoration. 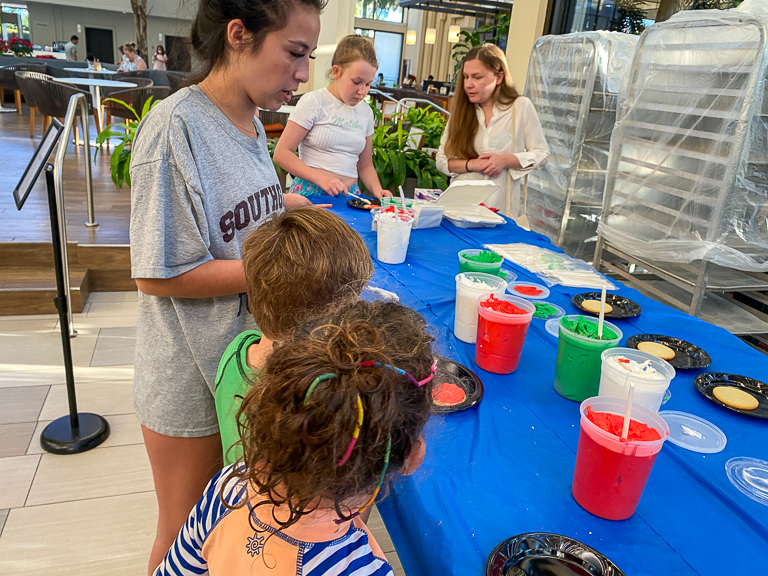 Theresa made a Christmas tree with decorations, and even mixed red and green to make a brown tree trunk. The kids had a lot of fun with it and loved eating their cookies. 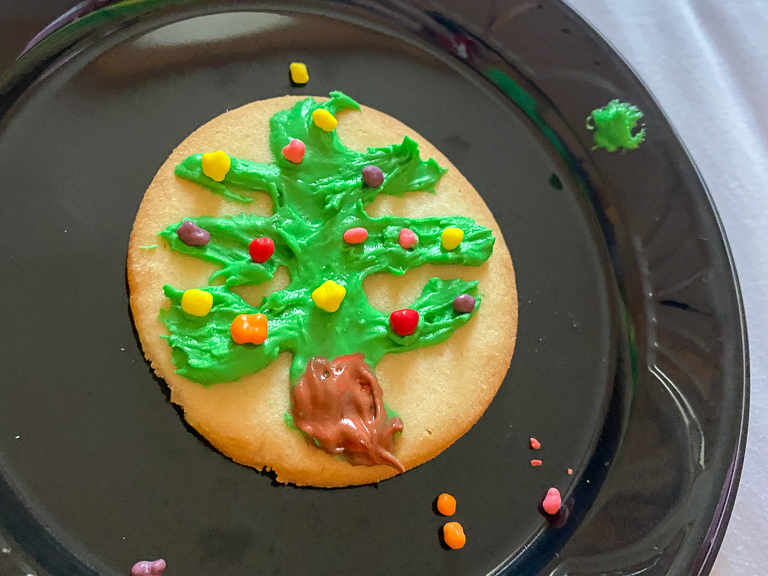 In the middle of the day, when the sun was the hottest, everyone headed to the beach for the Snowball Toss. Ian was wondering how they could make snowballs here in Florida and worker Emily told him that it was really from their snowcone machine and they packed them into snowballs. 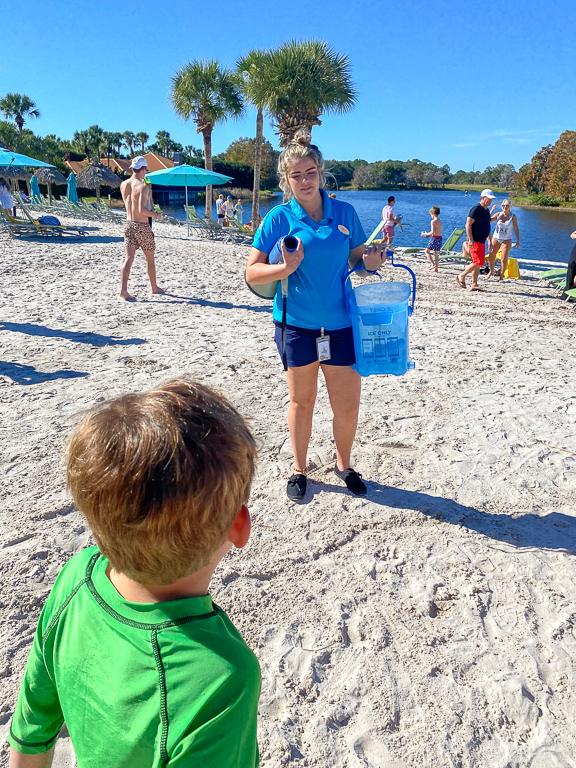 Theresa teamed up with Alli, while I teamed up with Ian. The goal: stand across from each other and toss your snowball to your partner. If you drop your snowball or if your snowball melts, you are out.
The kids were both very focused because they outlasted even some adults! In the end, it was Alli/Theresa, Ian/Joe, and another pair of teenagers, all going into the final round. Our snowballs were starting to get pretty small by that point and both Ian and Alli dropped it on the final round. That's okay though! Tied for 2nd place! They got a congratulations from Emily, saying they must both be really good at baseball too. 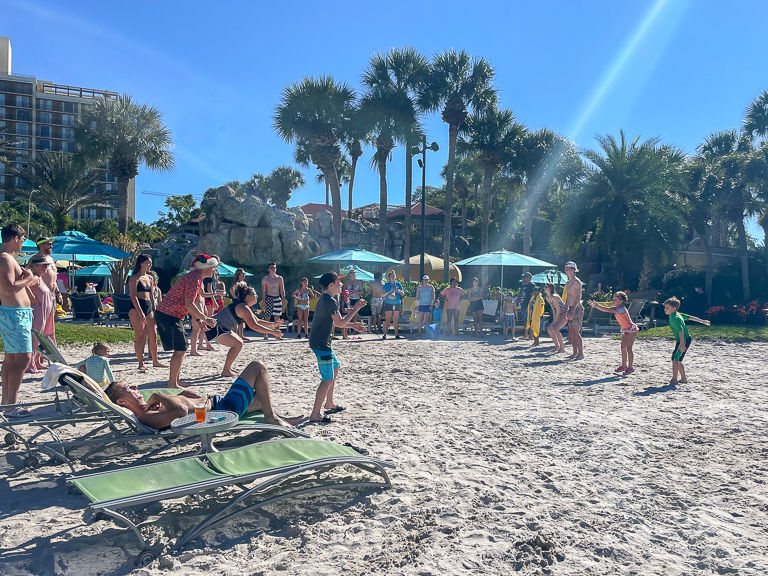 This hotel resort has so much stuff to do! And it's all free with our stay here!
Just beside the beach is an 8 hole pitch and putt golf course! 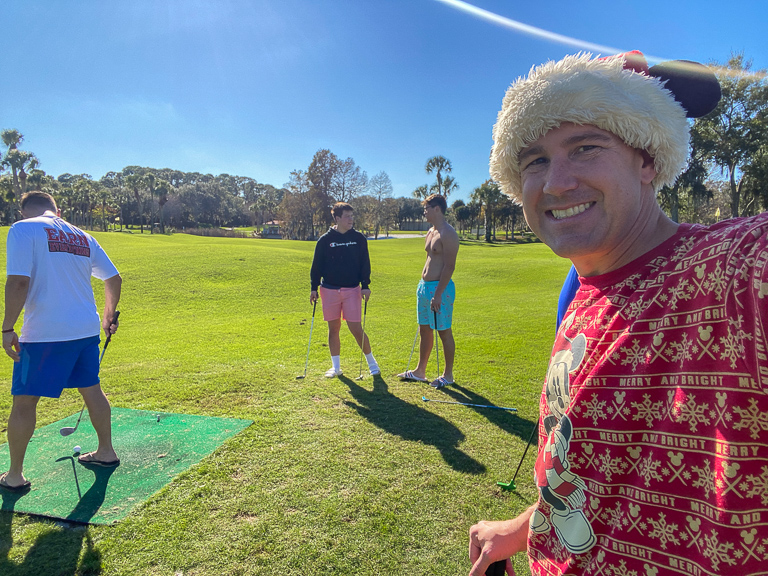 Grab a pitching wedge, a putter, and a golf ball and you're all set to go. The tee boxes were about 60 yards from the holes. The five of us learned that we could all use a little more practice, but we had a lot of laughs while we were doing it. 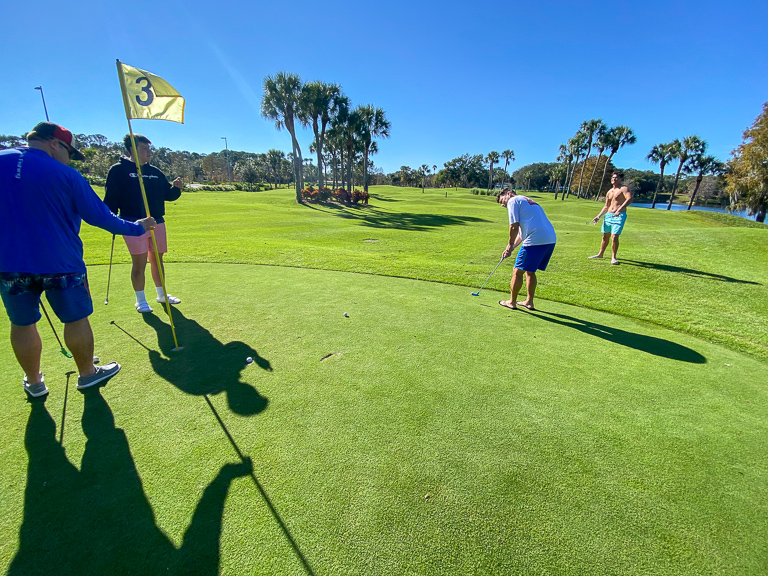 With the hole so close, and after having such crazy luck with the pitching wedge, Tyler and Ethan decided to give their putters a try from the tee-box. It wasn't a whole lot better, but it was fun to try.
There's even a little 5 hole mini-golf course you can play. 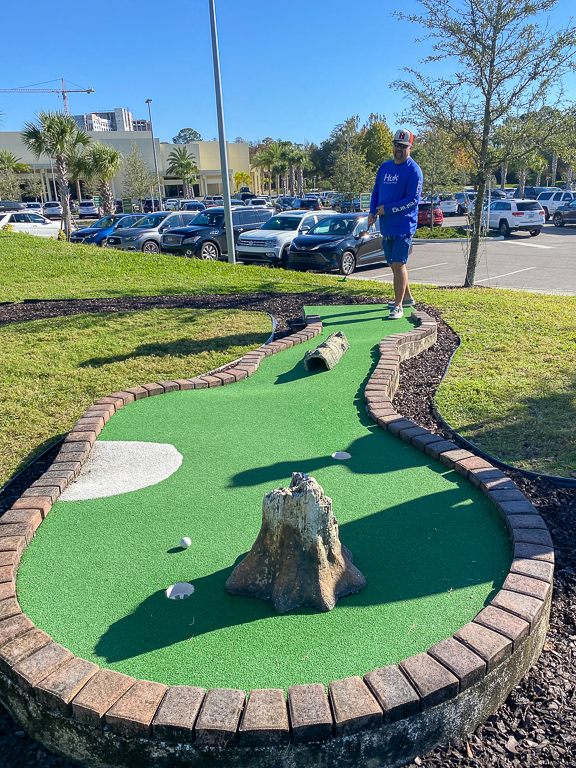 At the end of the day, the kids went down to watch as they determined the winner for the candy guessing game. We didn't win. Uncle Donald was closest with a guess of 390. I think it was something like 408 Hershey's Kisses in that jar. I was way off!
The people who won were very excited, so we were happy for them.
Later in the day as we were walking back into the hotel, they were walking the opposite direction and offered the kids as many Hershey's Kisses as they could grab, which was super nice of them. 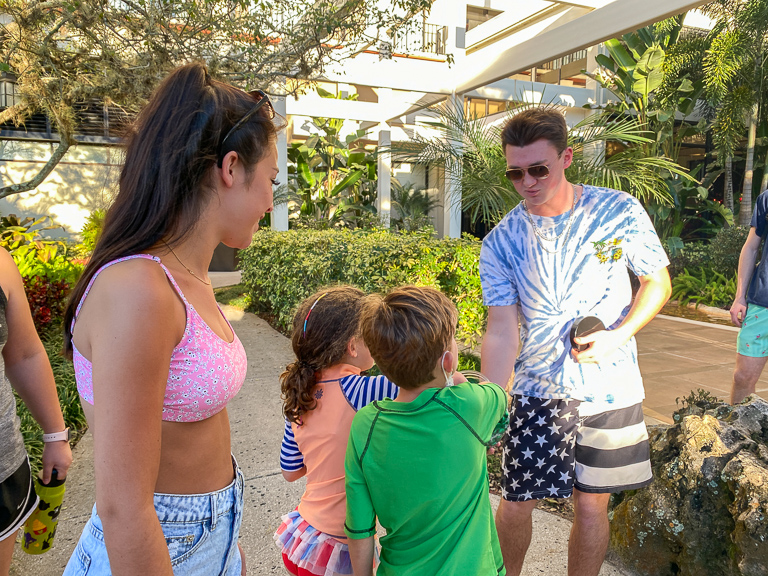 It's been a Christmas day unlike any other we've had before. As the sun set, Theresa and I relaxed in a hammock on the beach while the kids played in the pool. Today was full of fun! 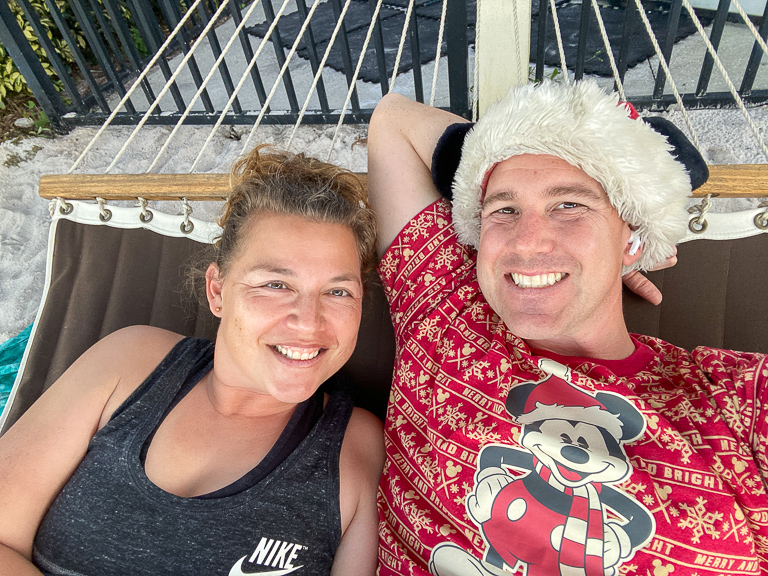