Those of you who think pineapple on pizza is an abomination might just want to skip reading this week's pizza post. This week is all about that tasty fruit that goes so great on pizza that it is getting a pizza dedicated entirely to it. This pizza is going to have pineapple on it in four different ways! 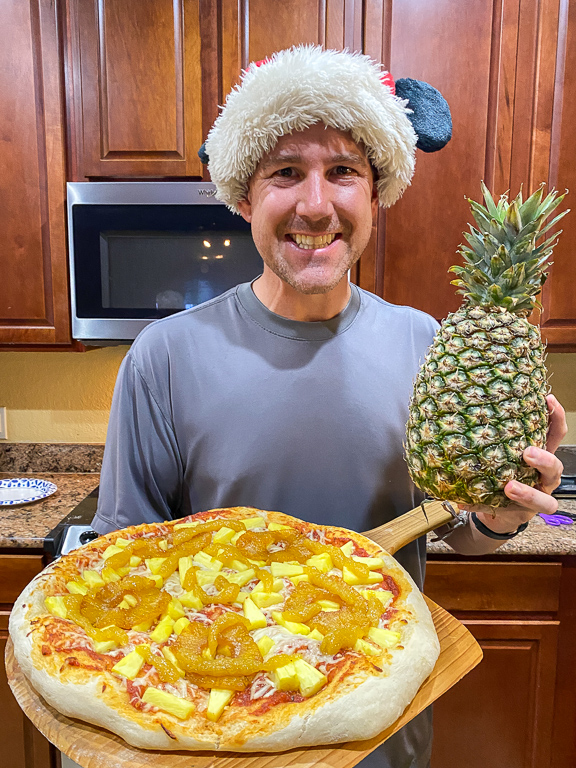 Our local Aldi was running a great sale on whole pineapples. Only $1.29 each! Today's pizzas will be using fresh pineapple compared to the canned stuff. And thank you to my sister-in-law Rita for cutting all the pineapples up for me to use.
To start, into a hot pan goes a few handfuls of pineapple chunks. I cooked them until they were nice and soft. 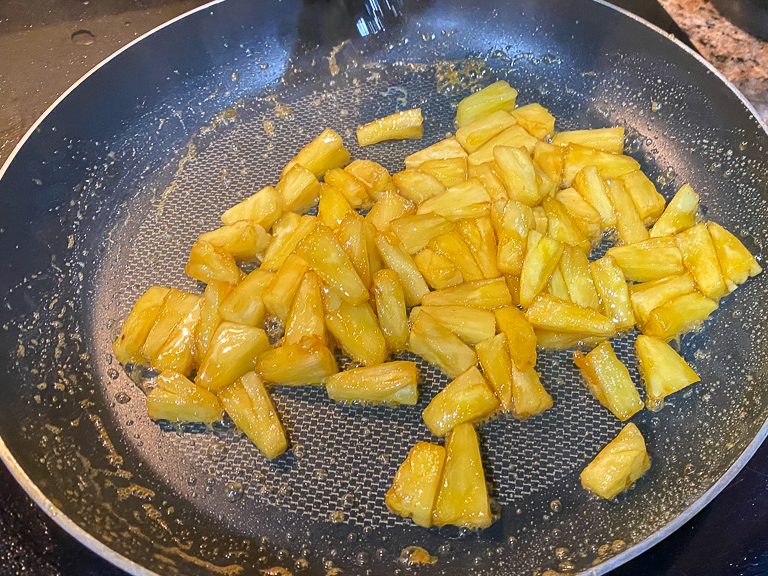 Those pineapples went into a food processor. 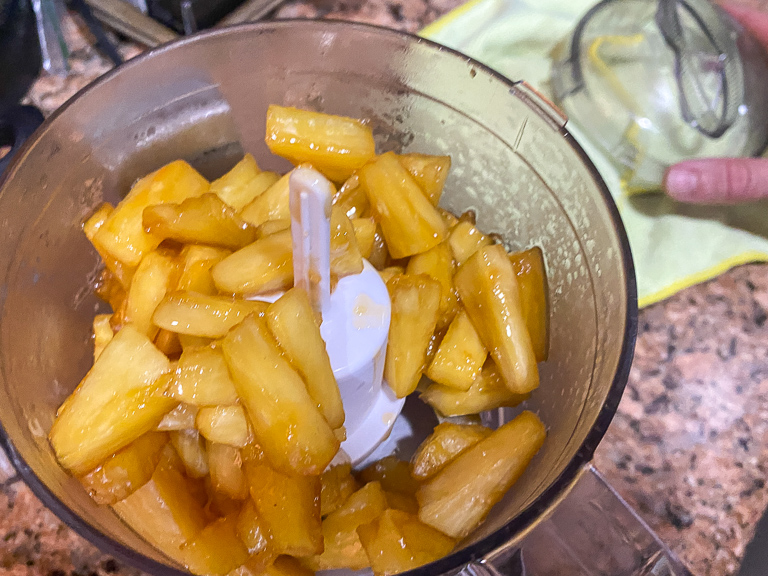 Where I buzzed them until they were as smooth as I could get them. I took half of the mixture and stirred it into my homemade pizza sauce to give me a pineapple and tomato sauce base for my pizza.
The other half of the pureed pineapple was returned to the stove to simmer further, then I mixed a little corn starch into it to form a pineapple jam. 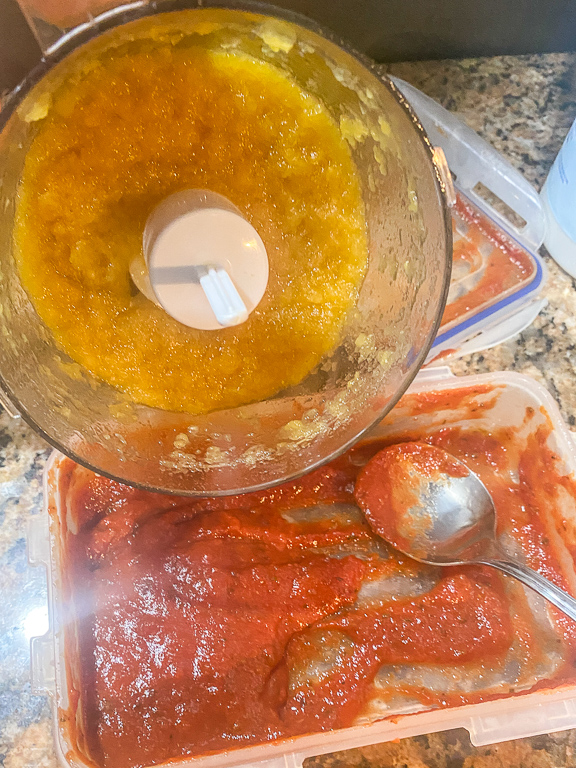 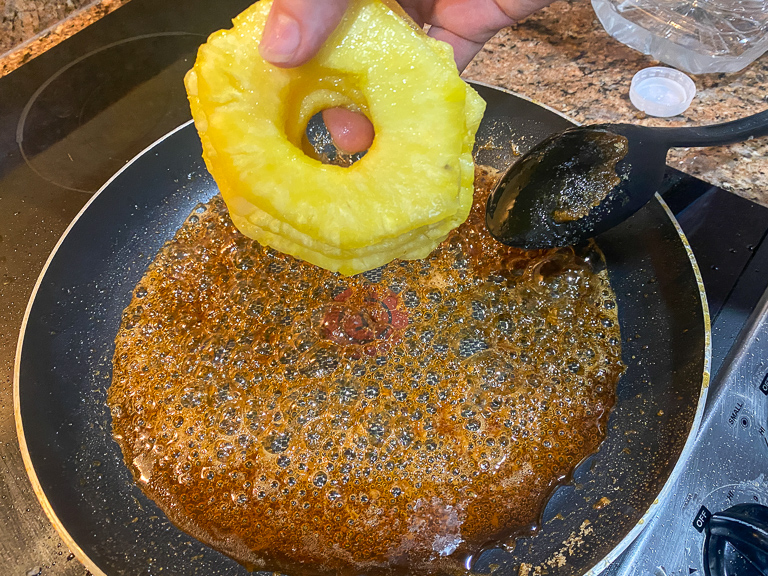 The fourth and final pineapple addition is fresh pineapple chunks. 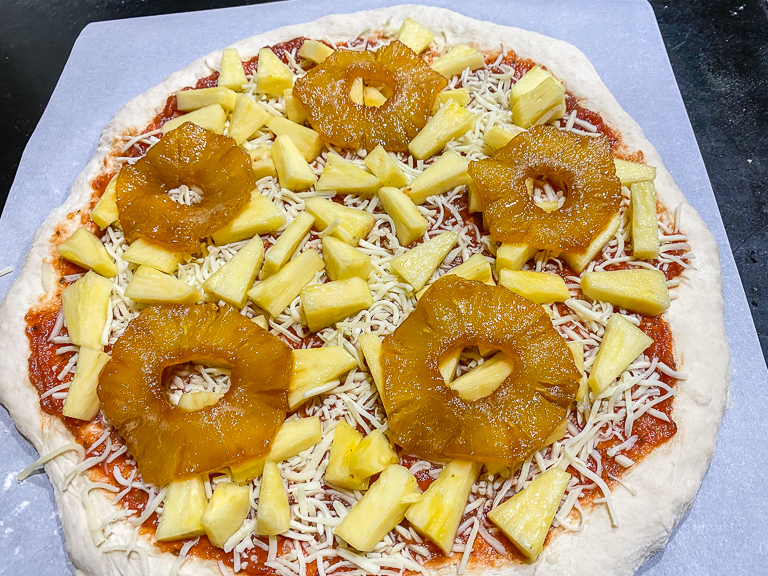 We're in Florida this week celebrating Christmas with a whole bunch of family. This is the first time I've made a quadruple batch of my pizza dough. That is a lot! I'm making 9 different pizzas tonight! 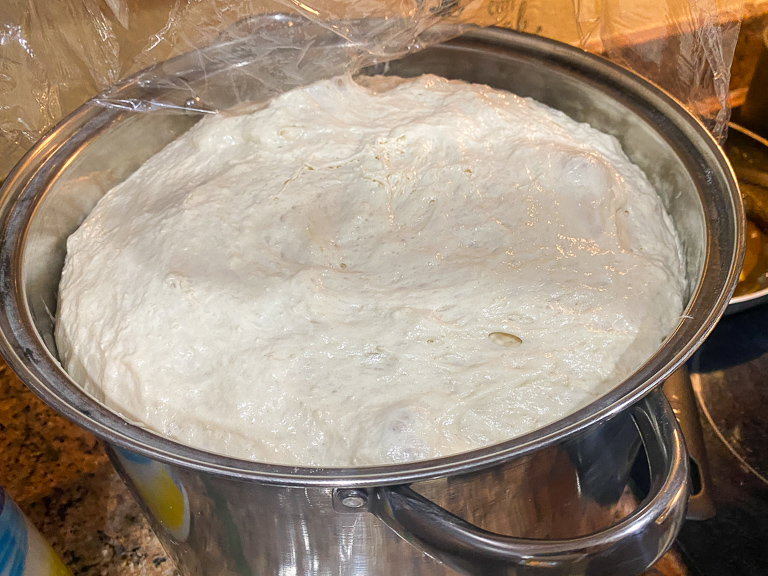 Theresa and Rita helped with sauces and toppings on everything. I had the toaster oven and regular oven, and pizzas were going in and out like crazy. 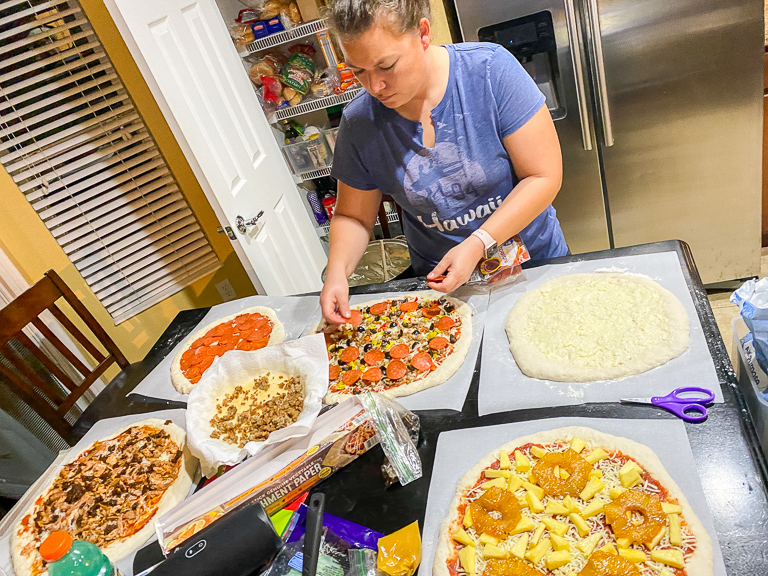 I made a few of the ones that everybody likes, like hawaiian, pepperoni, and meat lovers. 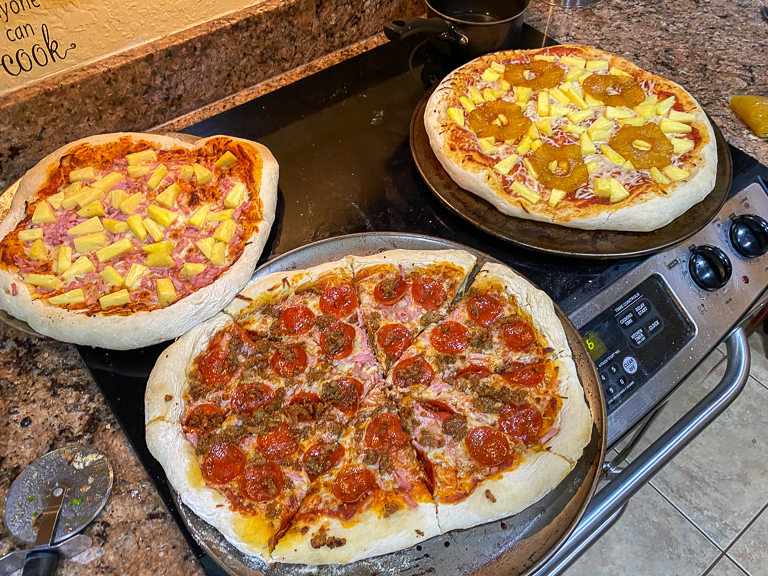 I should have cut the tip of my ziplock piping bag a little smaller, to make the pineapple jam drizzle a little more appealing. Oh well. It'll taste good regardless. 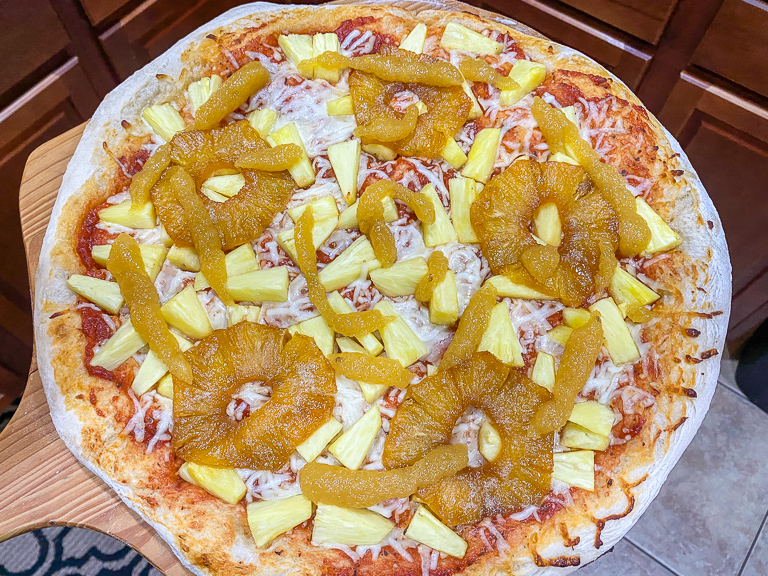 I made a giant supreme pizza with all the veggies for people who like that sort of thing. 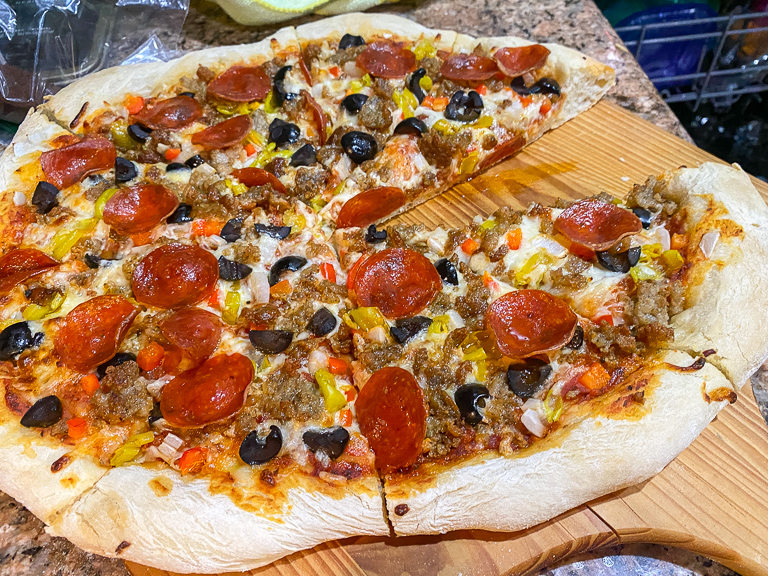 And from Christmas dinner, I had a few racks of baby back ribs, which I pulled off the bone, mixed with BBQ sauce, along with caramelized onions and cilantro. After trying it, Aubrey said it was even better than the BBQ Chicken pizza I've made before. I agree! This one was delicious! No red sauce, ham, and olives. This looks like a Theresa pizza. And it turns out that her sister wanted this kind as well. 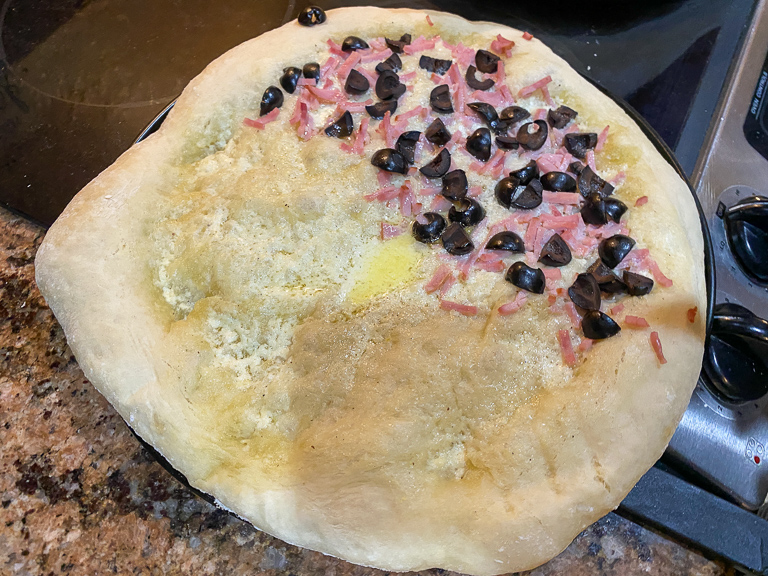 So many pizzas, and even some green salad. 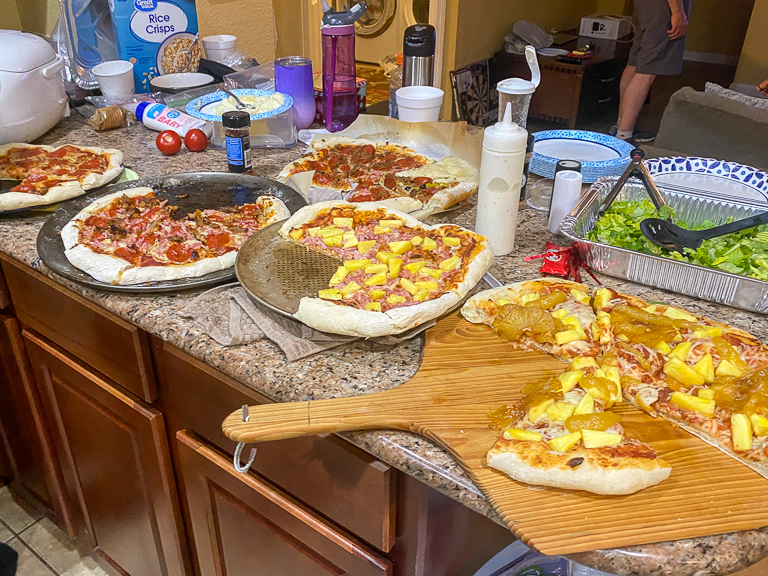 My plate tonight. The pineapple pizza was as delicious as I was expecting. So many different flavors of pineapple and all of them were so good! Austin, who doesn't like pineapple pizza, decided to try a slice and thought it was great!
Theresa tried a small slice and said that it needed meat.
Either way though, I thought it was very good and I consider this Pineapple Four Ways pizza a success! 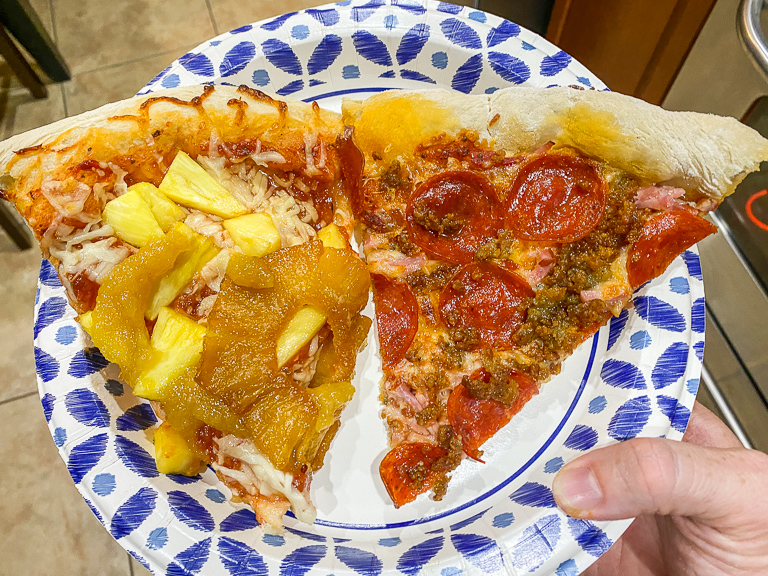