It's late November in Colorado and temperatures are dropping outside. Megan said that on cold days she loves to make a particular kind of soup. From there, that suggestion grew into "Why not have a giant soup night, where people can make their favorite type of soup and we'll all share it?" That certainly sounds like our kind of taste test. 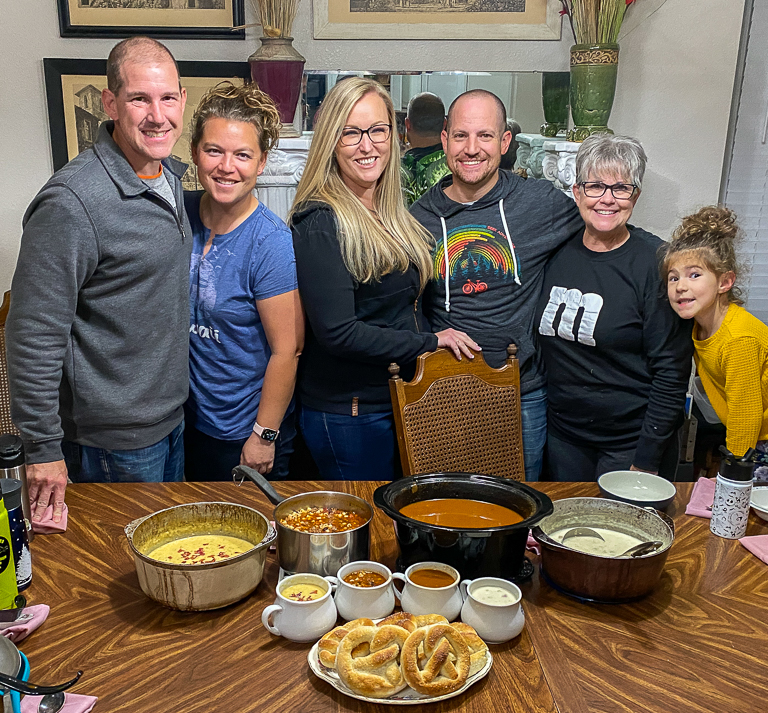 Four of us opted to make soup today.
1. Cheddar Beer soup - inspired by the Epcot Canada recipe
2. Olive Garden Pasta Fagioli Soup
3. German Goulash
4. Swiss, Ham, and Potato soup
I could have made some homemade bread to go with it, but Patrick said "I know a pretzel guy" and provided us with lots of hot pretzels to have along with our soups. 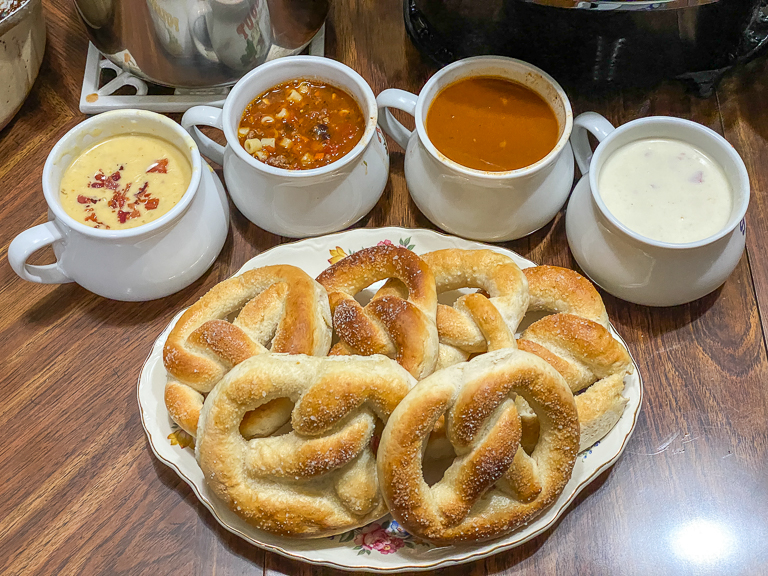 According to my Dad's weather tracker, it's 27.5F outside at 6:30pm. A perfect night to stay indoors and have warm soup. 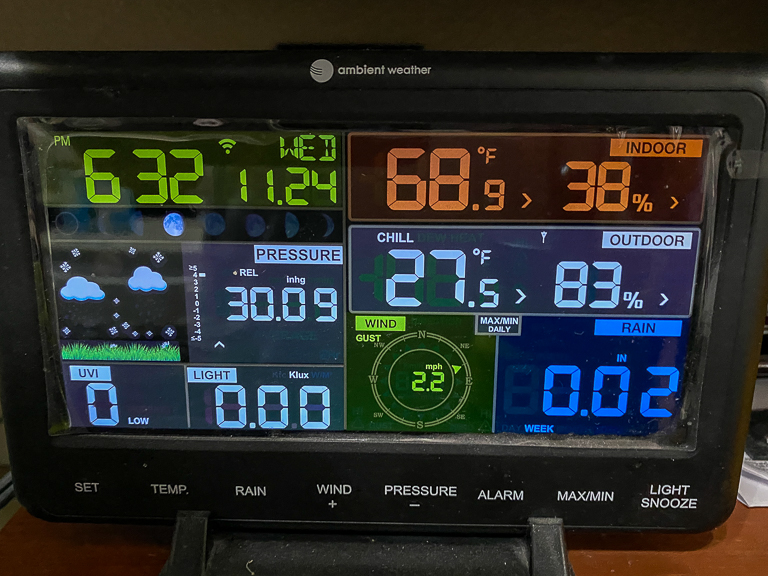 Theresa has many different soups in her repertoire, but the one that gets the most rave reviews (and Alli's favorite) is her Paste Fagioli recipe, based on the soup from Olive Garden.
Her base is the recipe from TopSecretRecipes.com with a few modifications. Instead of V8, she uses beef broth. And instead of kidney beans she uses black beans. And finally instead of tomato sauce, she uses another can of diced tomatoes. 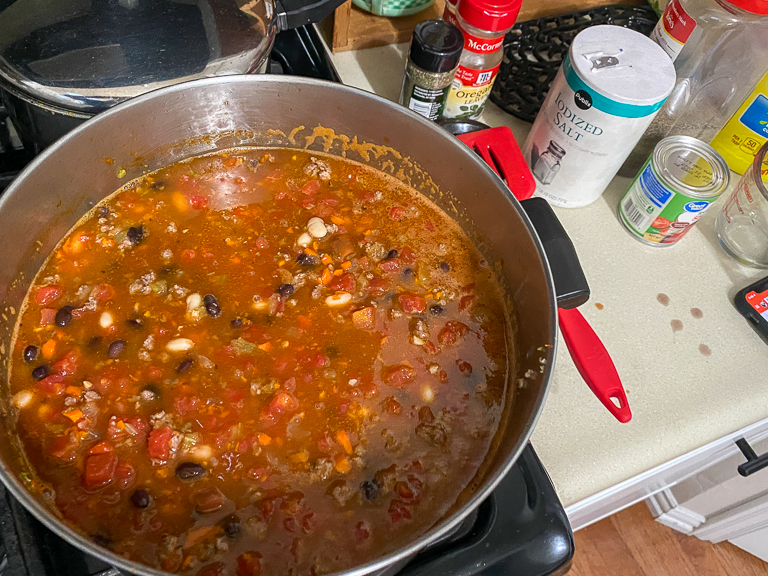 Megan says Goulash Soup (gulaschsuppe) is a traditional Hungarian dish, but it's popular in all of Central Europe. She fell in love with it while traveling through Germany and Austria and can usually find it at authentic German restaurants. She's pulled pieces from lots of different recipes to come up with this one, which was always her and her good friend's favorite.
Megan - It's sentimental and it warms my soul. 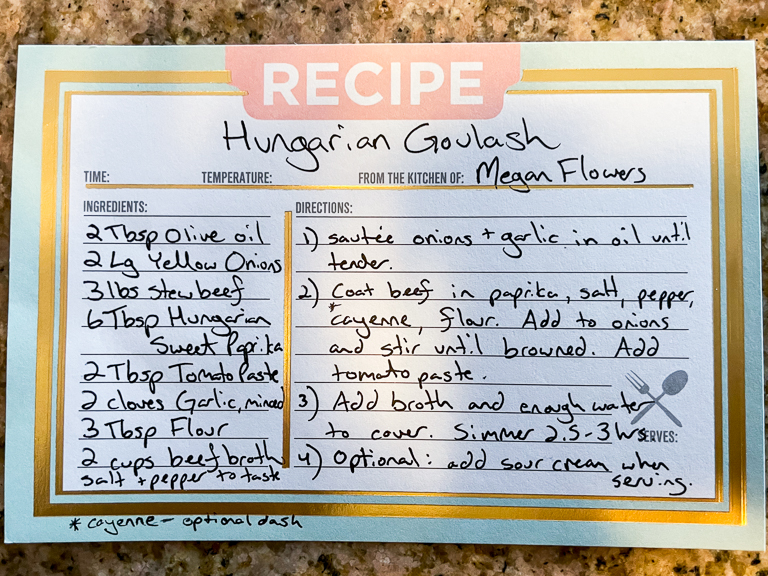 For my contribution, I'll be making a cheddar beer soup. The soup from Le Celier at Disney World's Epcot is one of the best soups I've ever tasted. I'll be making that tonight. My recipe is from FoodAndWine.com. It starts with bacon, onion, fresh thyme, jalapeno, garlic, and celery. 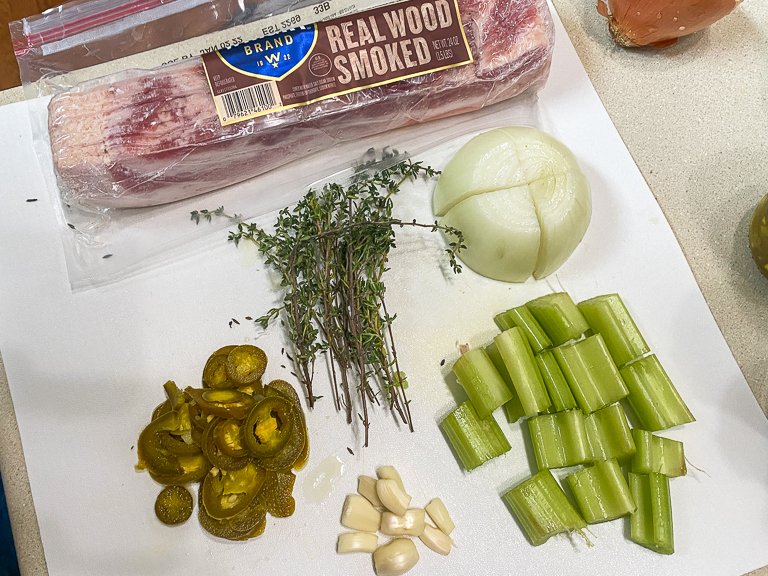 The chopped bacon bits cook and fry in the bottom of a soup pot. Once cooked, I pulled them out but left all the bacon drippings. I finely diced the onions and celery and cooked all the veggies in the bacon grease until they were soft. Once that was completed I added low sodium chicken broth and a bit of lager. 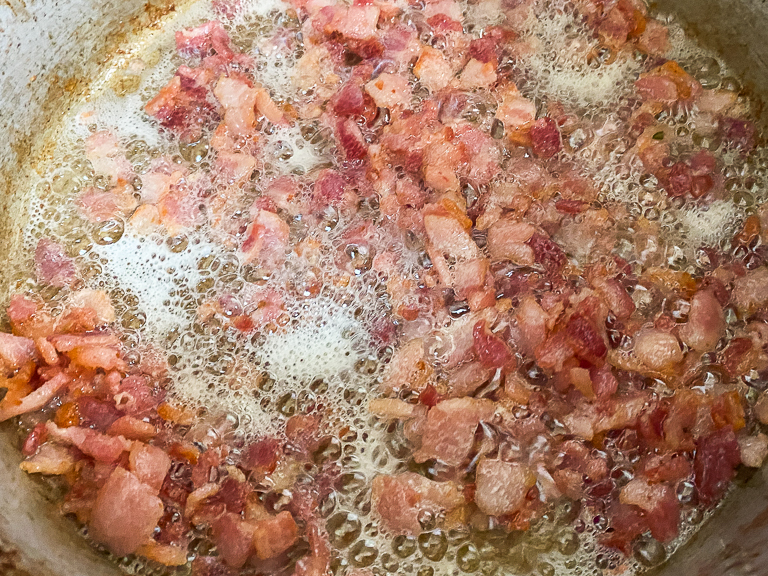 This is going to need a thickening agent. A roux will be perfect. In another pan I melted butter and then browned a bit of flour. I stirred it into the rest of the ingredients. Oh yeah, it's all coming together now. 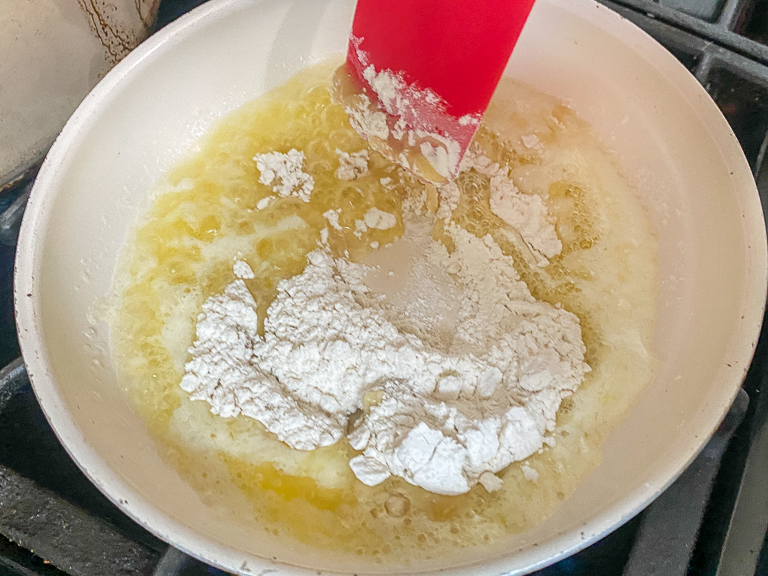 I need a little bit of cheese to go into my cheddar beer soup. Two cheeses in the form of a smoked cheddar and a regular cheddar will be perfect. 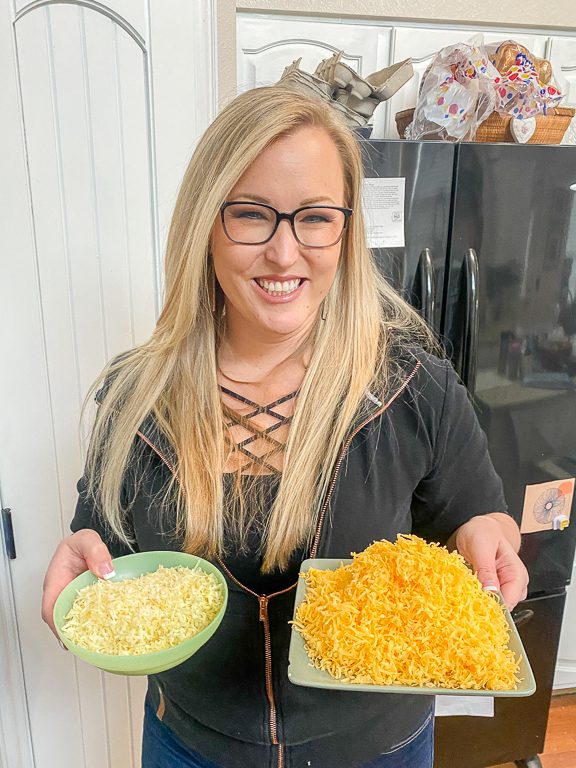 I added the cheeses, a bit of heavy cream, and a little bit more lager to the soup. Finally I added most of the bacon bits from earlier back to the soup, making sure to save a few as a topping before serving. 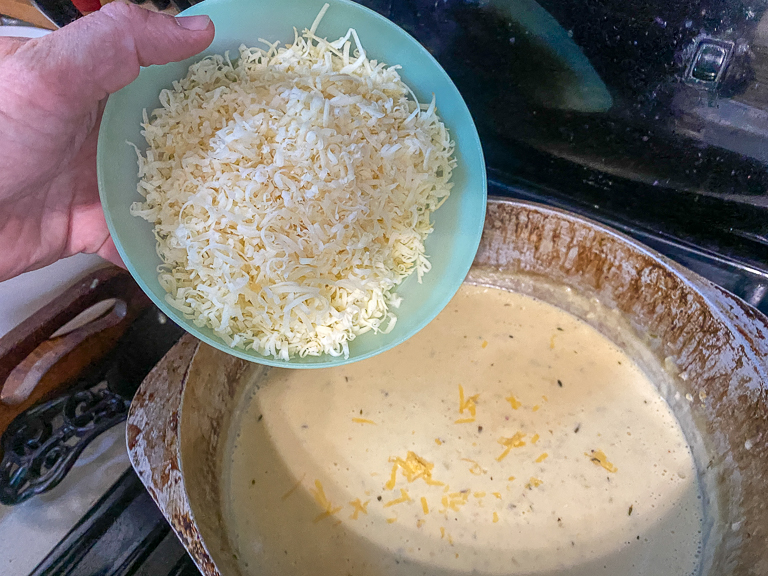 From my mom, there's a certain soup that I grew up having that I specifically requested she make. It's simple, but very delicious. 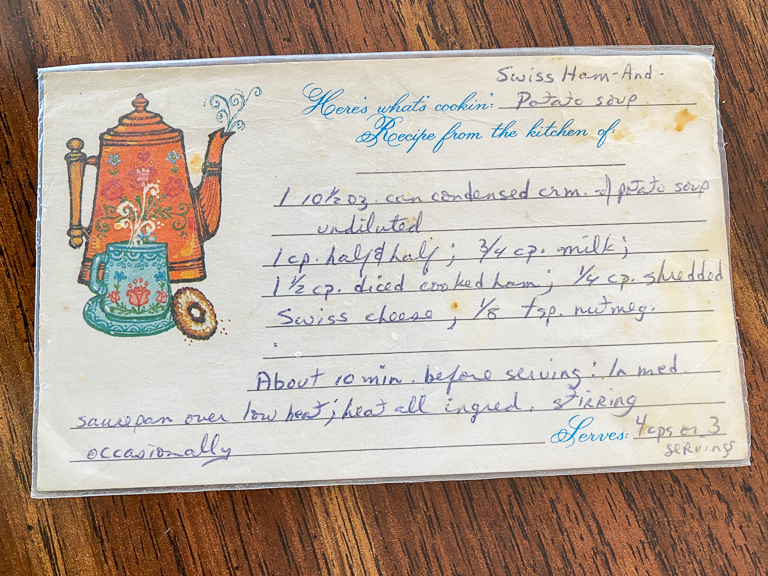 Six ingredients go into a pot and heat up together. Condensed Cream of Potato Soup, half and half, milk, diced ham, swiss cheese, and nutmeg. I think it's the nutmeg that pulls it all together. 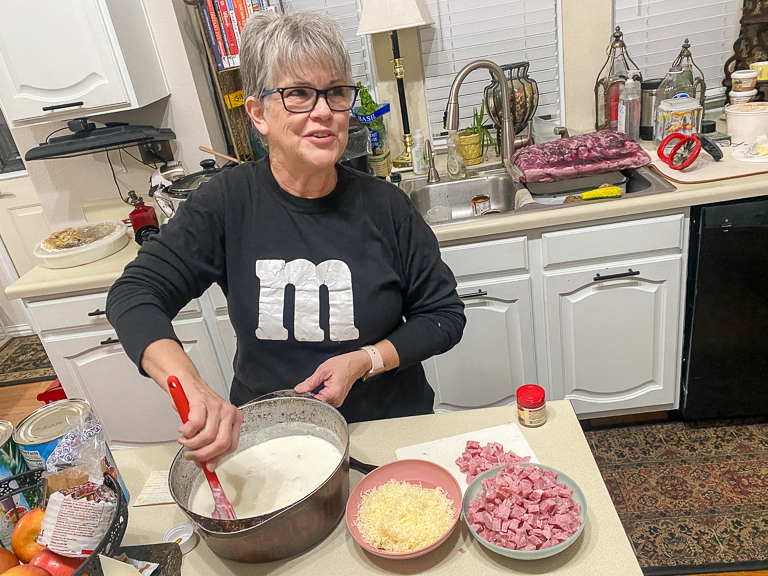 Behold our bounty. This is going to be a good night. 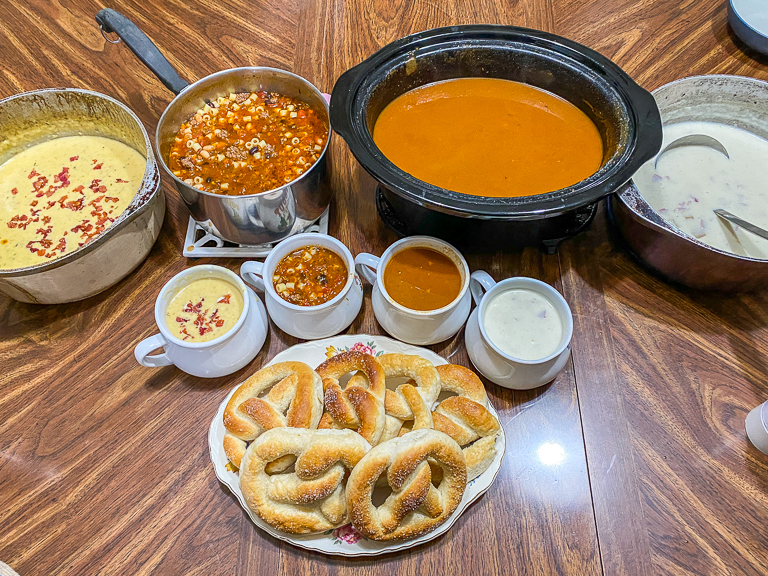 Tuck in everyone! It was fun going around trying a little bit of all the different soups and getting a taste of people's favorites. 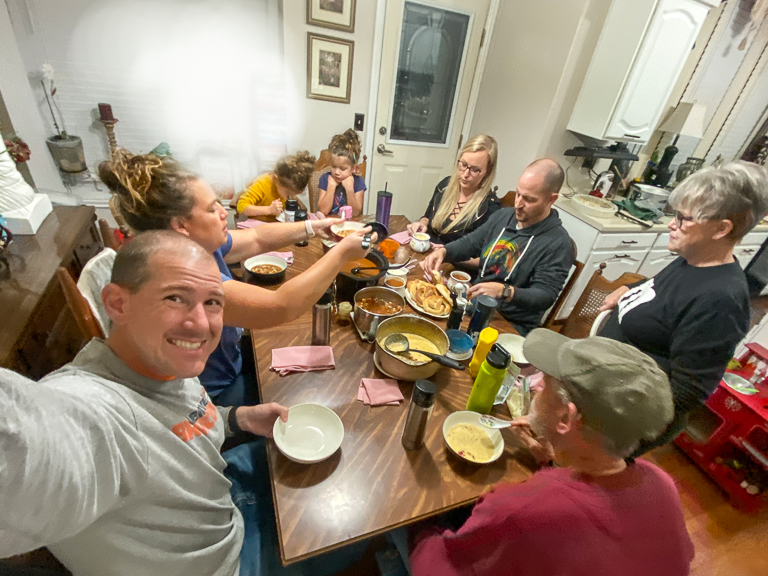 My cheddar beer soup was delicious. Those jalapenos I used were a little spicier than I was expecting and gave this dish some heat! I wasn't expect it, but I liked it!
Theresa's Pasta Fagioli is always good. There's a reason we make it so often, even in the RV.
Megan's Goulash was peppery with a strong paprika flavor. I can see why it would be Megan's favorite.
Mom's Swiss, Ham, and Potato soup was as good as I remember it. Perfect for cold Colorado days.
Patrick's pretzels were great too for sopping up and soup that was left over in the bowl.
I'm not going to pick a favorite because they were all delicious. Thank you everyone for participating! 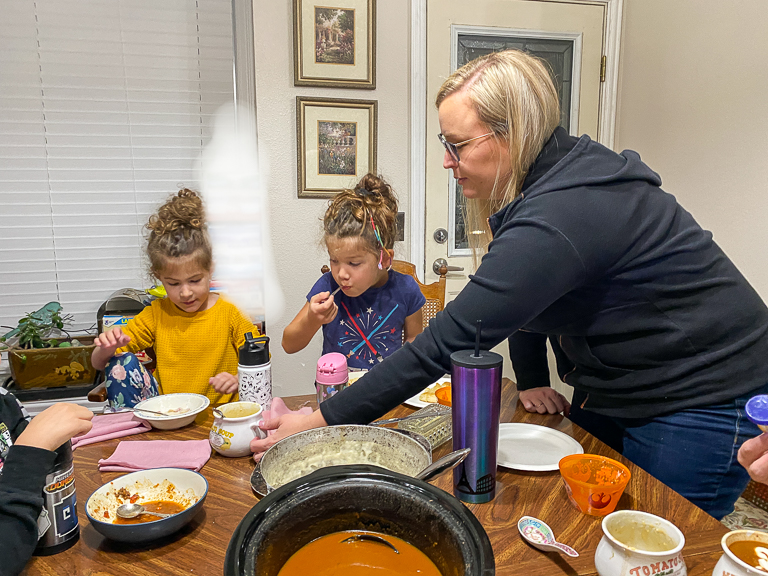