Today is New Years Eve and with that, we'll be happy to close out 2021. How have you done on your New Years Resolutions?

There's one resolution that we've been working towards all year, and that is to join the 500 Club. What's the 500 Club? It was anything we wanted it to be, as long as it got us outside and moving around. It can mean something different to everyone.

It started with my Dad, Mickey Flowers, who made it a goal to complete 500 Manitou Inclines in less than a year. Just to do 1 Manitou Incline is a challenge, but 500 in one year? That's extreme!
My Mother, Sheila Flowers, decided that she was going to make it a goal to her 10,000 steps a day, and then walk 500 miles on top of that in one year. Great goal!
And for my family, we like both bike riding and walking, so we're going to try to do 500 miles of each in just one year! 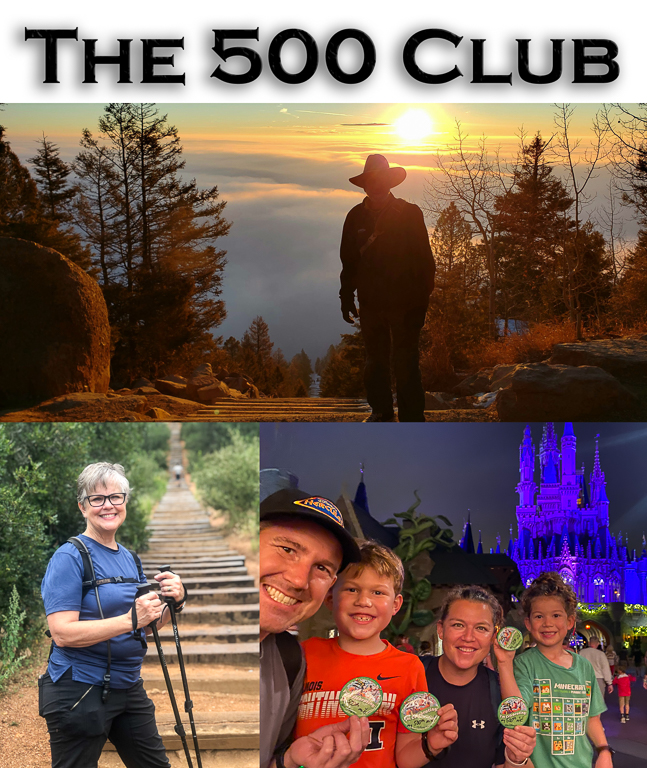 My Dad was super dedicated, waking up early to put in his miles. Each Incline Up-Down is 2 miles, plus there's a 2.5 mile walk to and from the parking lot, so he's going to have a lot of miles completed this year. The cool part of the day is the best time to hike, so he was regularly completing 2-3 Inclines before the sun even came up.
And through doing this, he's made a whole bunch of great friends on the Incline who are also regularly hike there too. Throughout the year different family members would join him on special occasions. 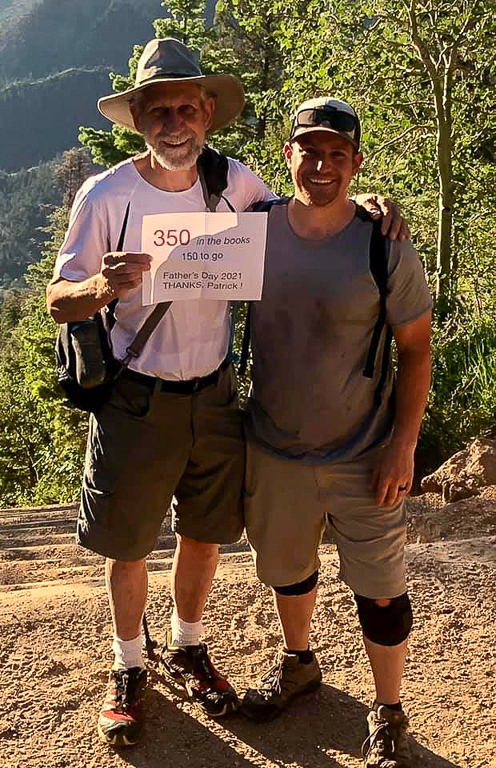 In September, with 3 months to spare, 500 Inclines was within reach. To celebrate, my brother, one of his sons, and my mom are all joining him for his final hike up the hill. 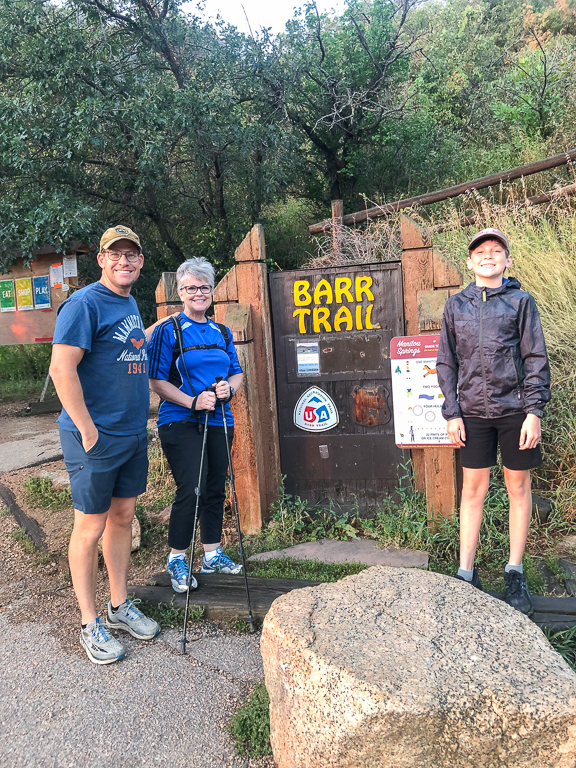 Along with a whole bunch of his Incline buddies. Congratulations Dad! 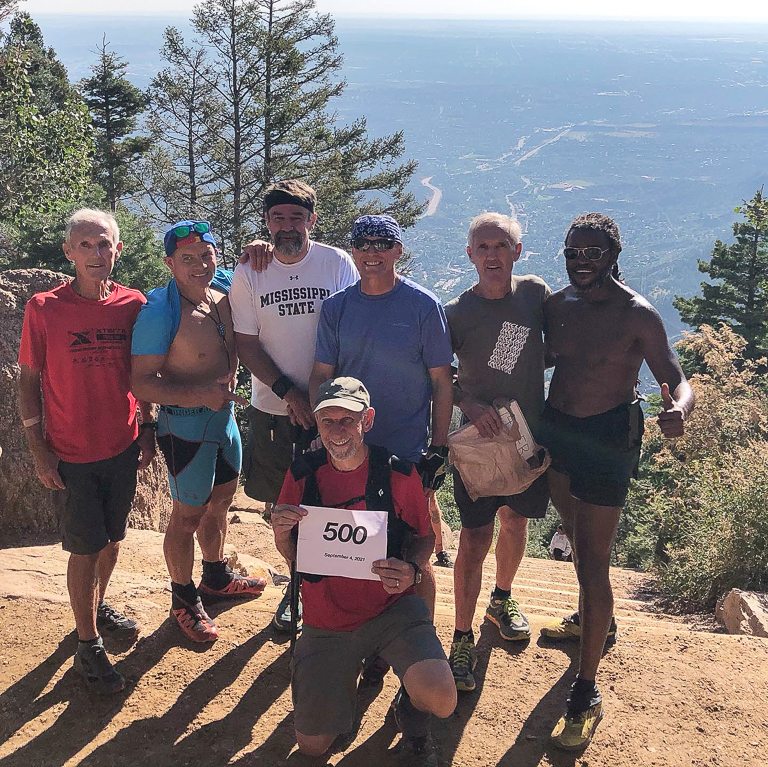 In 2011, Greg Cummings was the first person to complete 500 Inclines in 1 year. Ten years later, my dad is the 15th person to ever do it!
And if that wasn't enough, the next month, my Dad decided to tackle an Inclinathon. You've heard of a regular marathon of 26.2 miles. Because the Manitou Incline is 2 miles long up and down, if you do 13 in less than 24 hours, you'll have done a marathon on the Manitou Incline! That's crazy! On October 30th, he became the 11th person to finish an Inclinathon in 18 hours and 57 minutes, and also claimed the title of the oldest person to complete it at 65 years old! 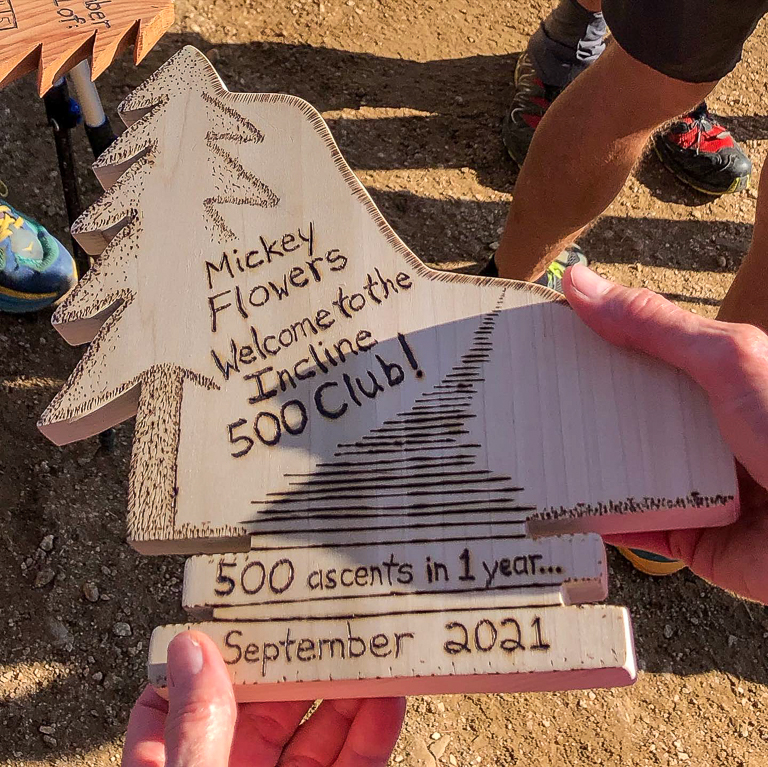 My Mother wasn't sitting around this year either. In addition to getting her 10,000 steps a day, she is doing 500 miles on top of that! Considering that 10,000 steps is equivalent to ~5 miles, she's going to be accumulating a lot of miles this year too! 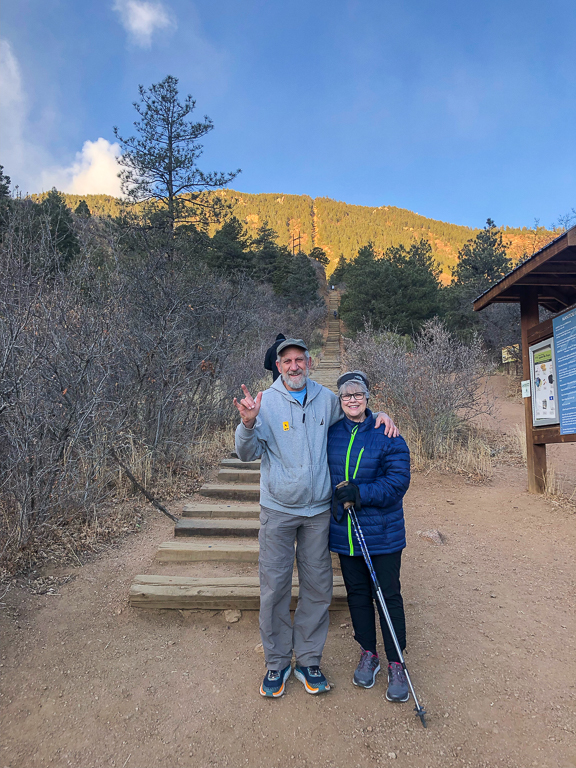 She completed her challenge this year by hiking the Manitou Incline as well! 500 mile challenge completed! Great work Mom! 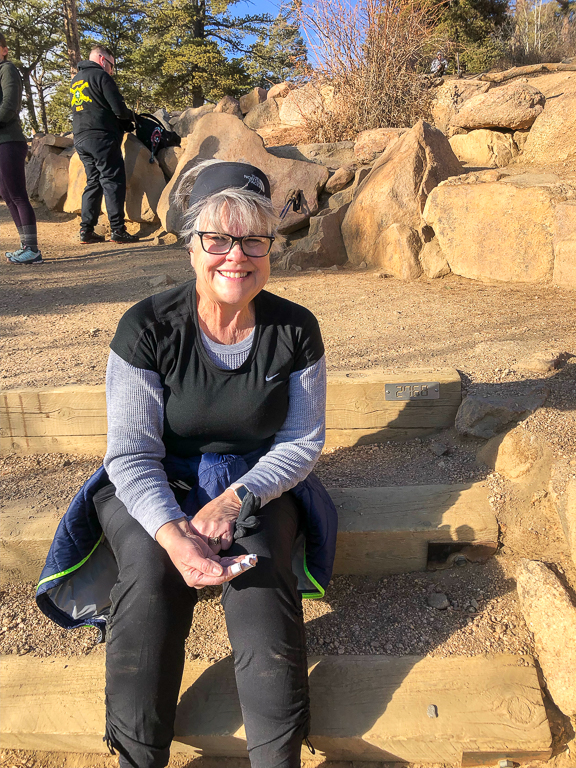 Theresa and I had the goal to get the kids outside and moving, even though we're stuck at home with lots of things closed due to Covid. Our selfish goal was to get the kids to the point where they could spend a day at Disneyland walking around without having to use the stroller.
We started with shorter walks, by going out after dinner around the neighborhood, but eventually moved up to 5 mile walks down to the beach. 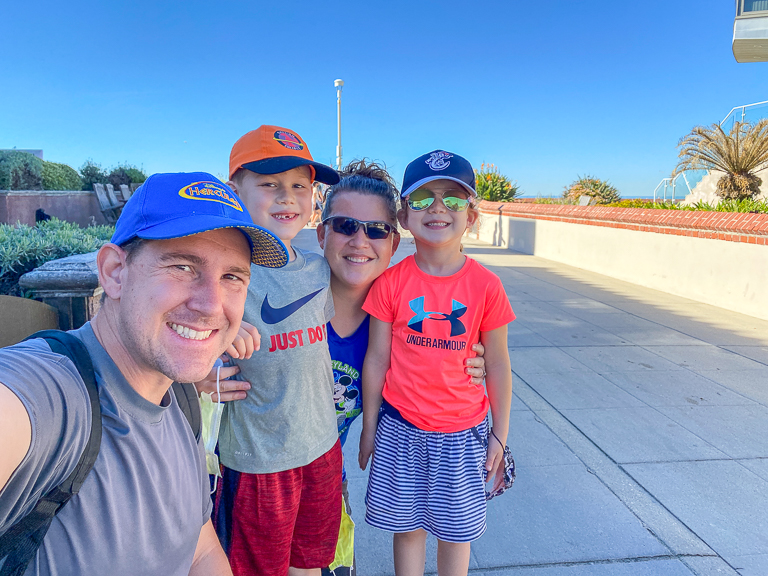 Another thing we've really enjoyed is getting out on our bicycles. The kids loved how must faster we could rack up miles on the bikes, and also get to other new and exciting playgrounds in our area. Along the way, we took the time to enjoy all the fun sights and smells and beauty of the places we were seeing. 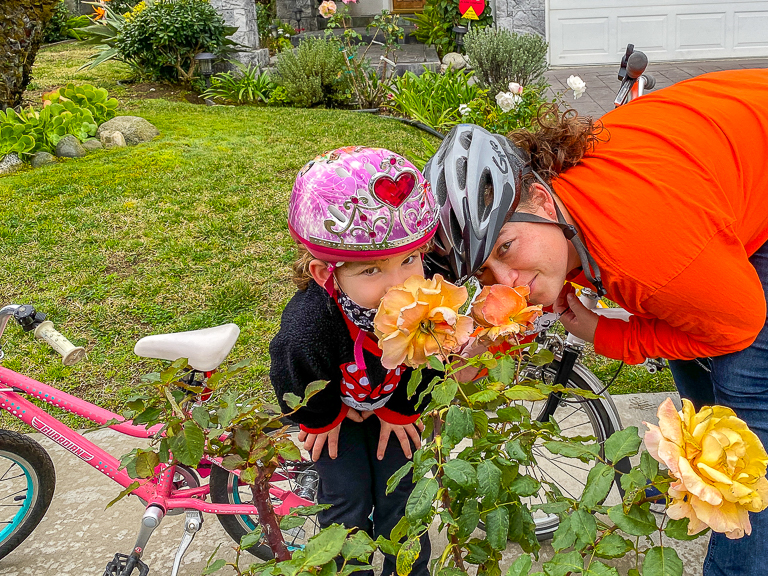 Our nightly walks took us further when we introduced the kids to Geocaching. They didn't mind at all going an extra half mile if it meant finding a new hidden treasure somewhere. And we received literally dozens of comments on our light vests. So many people thought they were a great idea and asked how they could buy one. We always pointed them to the Noxgear vests on Amazon. They were a little pricy at $60 each, but we'd buy them again in a heartbeat. 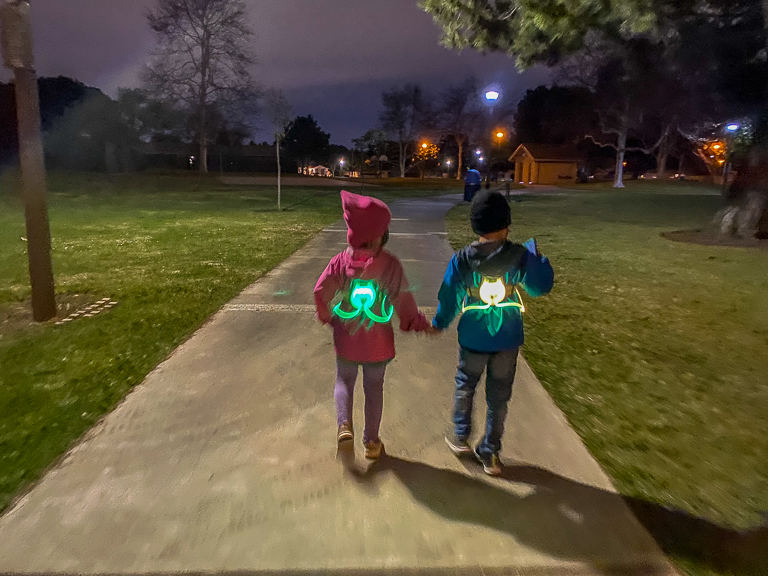 Before we left California to hit the road and travel in an RV full-time, the kids wanted to walk the entire Greenbelt trail, over 10 miles! It was a big challenge, but they did it! 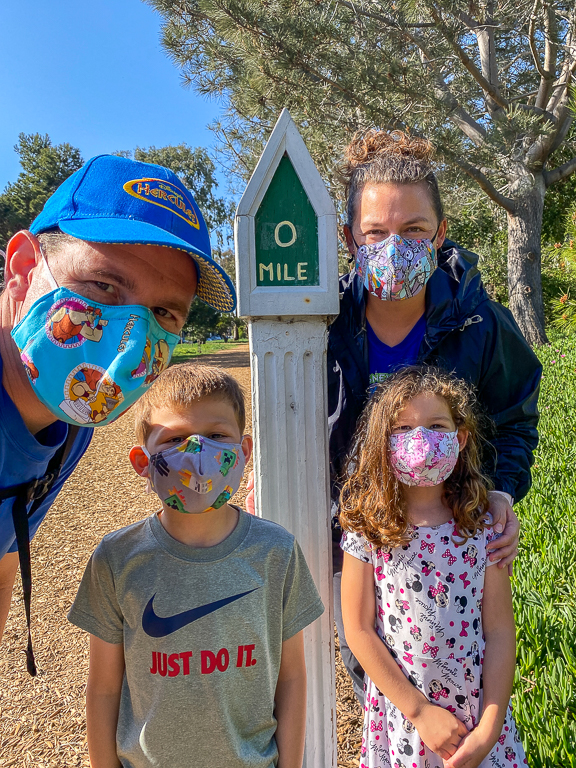 Once we got on the road, Theresa did a great job finding new and interesting places for us to continue our challenge. We rode through forests. 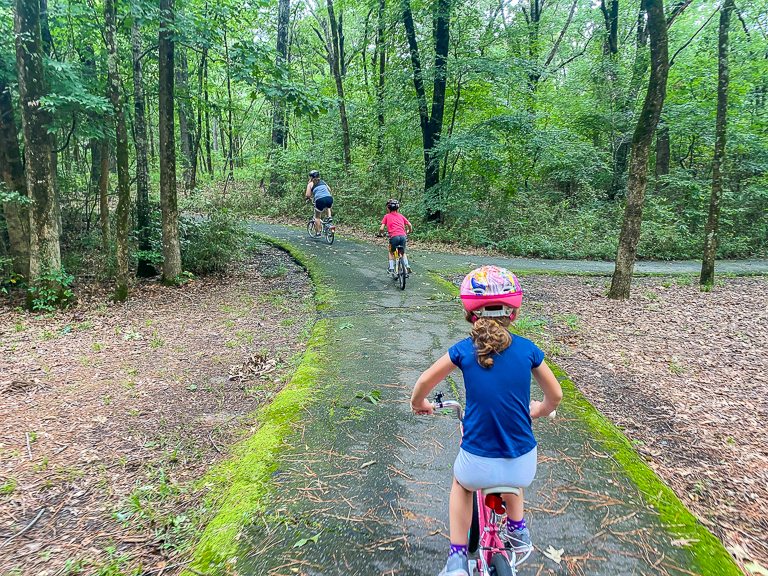 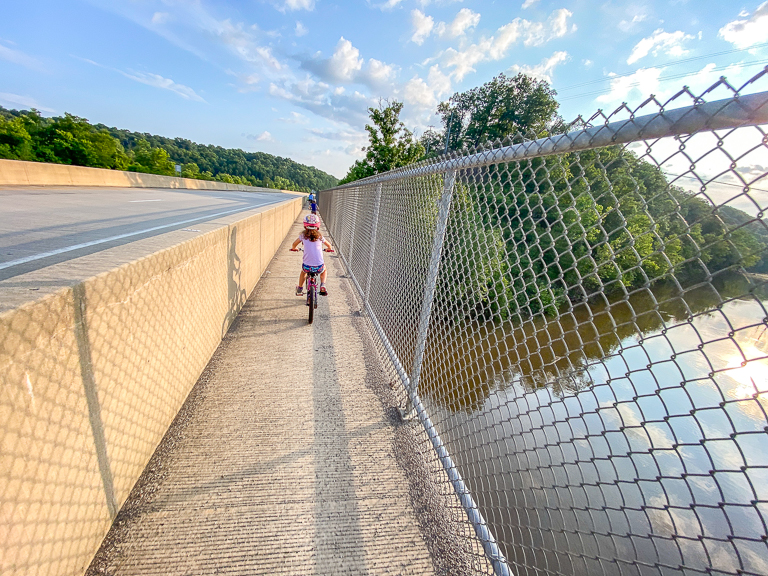 We hiked in the heat and got super sweaty in America's beautiful National Parks. 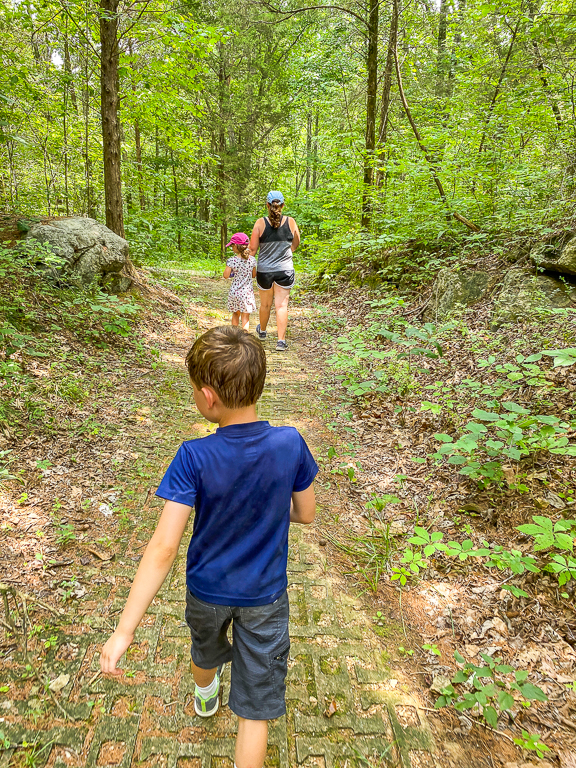 And a little rain wasn't going to stop us from getting outside and getting a few miles completed. 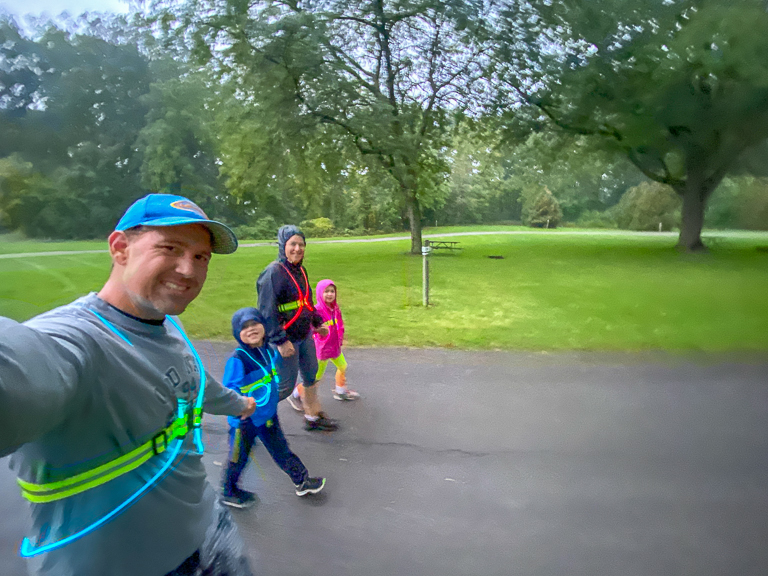 Former railroad lines that have been converted to rail trails were perfect for getting in lots of biking miles on a very flat grade. And most of the time they were paved, which meant we could ride even faster.
And I have to brag on Alli a little bit. She started the year on a single speed kids bike and rode 250 miles on it! It wasn't until late in the year that she moved up to a real bike with gears! I was very impressed with her. 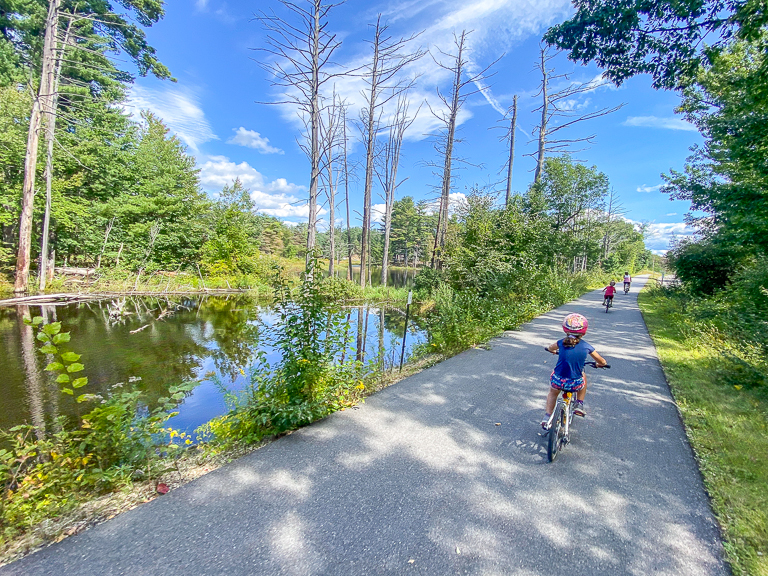 One of my favorite hikes, and the longest hike the kids did this year was at Niagara Falls in New York. 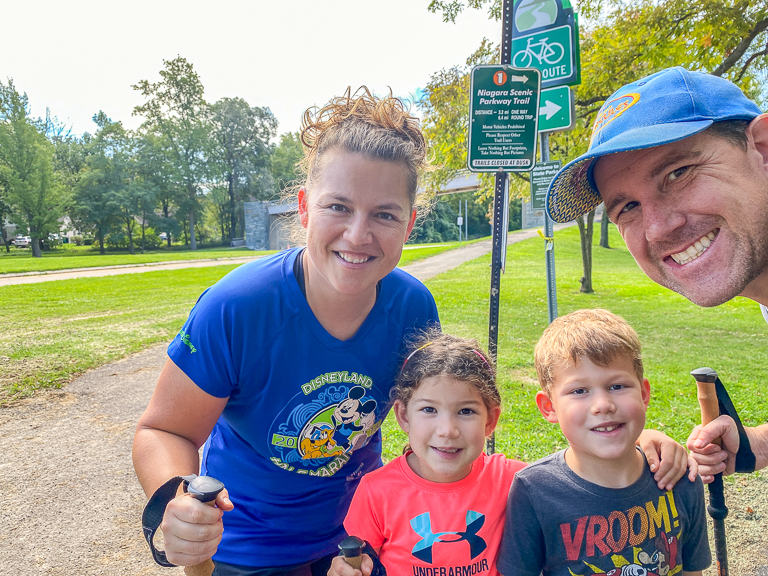 We hiked along the Niagara Gorge and ultimately finished at the beautiful Niagara Falls. That hike took them over 15 miles! And just the day before they did over 10 miles! I'd say they are certainly building up their stamina! 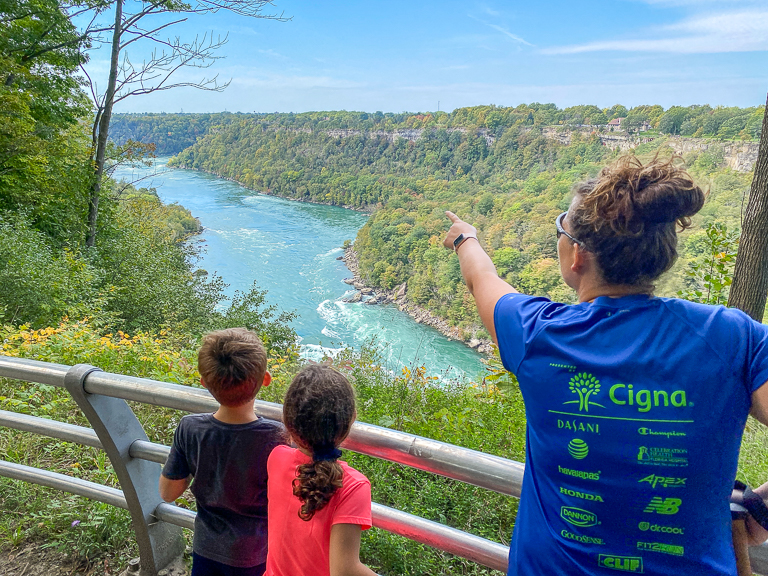 Getting outdoors we have seen so much nature, and the kids are getting a real appreciation for it. They'll have us stop for a beautiful flower. They also get to see a lot of animals in their natural habitat. 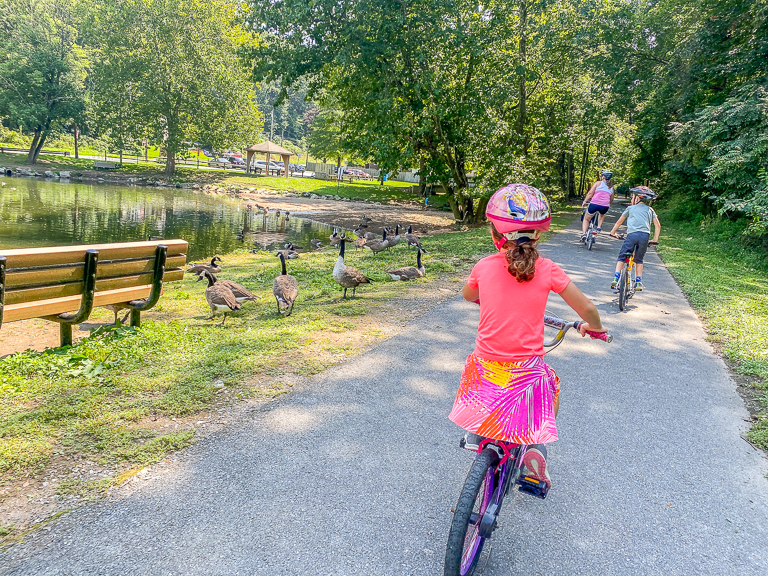 Like alligators, groundhogs, squirrels, birds, and tortoises. On our longest ride, they did a little over 30 miles! 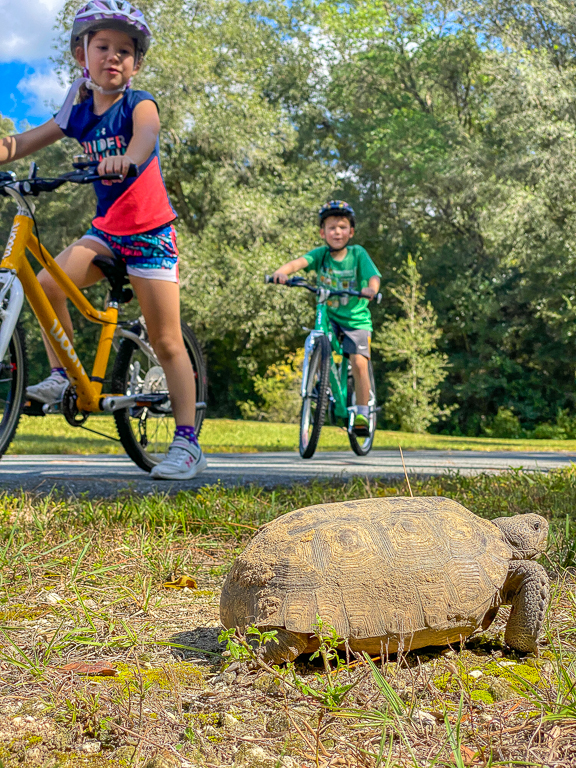 We knew that once we got to Florida, we'd be putting in a lot of miles walking around the Disney World property. It's not just about rides here. 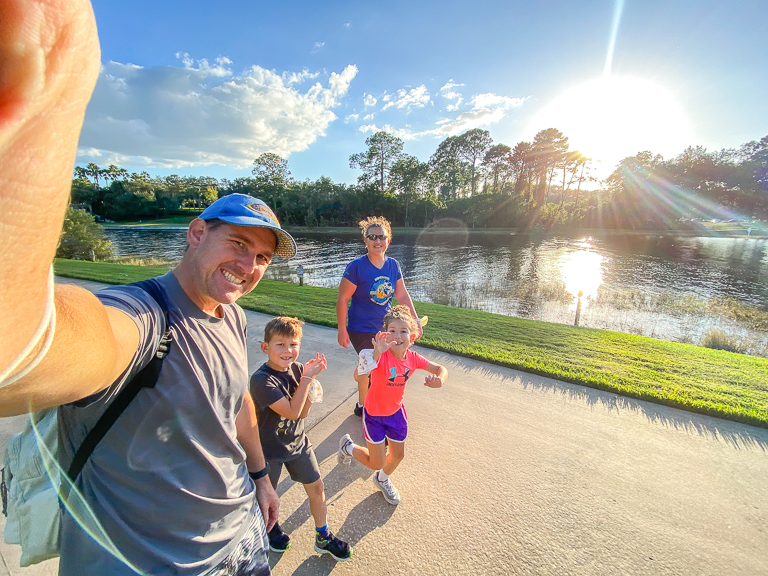 Every day we'd track our progress, and compare our total to what we should have completed by that point in the year. We knew that April/May/June would be difficult to keep the mileage up while we transitioned from living in a house to living in an RV full time, but in September and October we stepped it up big-time and finished everything early! 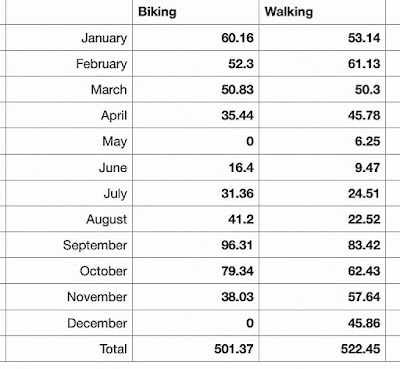 In November, before we left to head back to Colorado for Thanksgiving, while biking along the Van Fleet rail trail, we finally hit our 500 miles! Congratulations kids! You did it! Just one more goal to complete!
Our walking goal was always going to be the hardest for us to make. We average about a 20 minute mile, so it takes a lot longer to build up mileage compared to riding a bicycle. I knew if we planned it right, we could finish our walking miles while we were at Walt Disney World, but I couldn't have planned how it actually went down.
Going into the day, everyone knew we needed 4.3 miles to complete our 500 mile goal. After spending a fun day at the Magic Kingdom, we decided that we would leave right before the fireworks to avoid the crowds. Theresa was watching our mileage on her watch and right as we hit 4.3 miles, music started playing and the nightly fireworks started going off. It's a celebration for us! What perfect timing!
The kids have done an amazing job this year. Having a goal certainly motivated us to get outside and explore the world.
Ian - The Flowers Family sets high goals and we make them!
We certainly do Ian! Fantastic job!
So... what should we aim for in 2022?
Posted by Joe at 2:00 PM