There's two Girl Scouts cookies that I have to have every year. Thin Mints and Samoas, but my favorite of the two are Samoas. That combination of Coconut, Chocolate, and Caramel is so good! Theresa and her mom agree, Samoas are the best cookie around!
There's only one problem. Girl Scout cookies are only sold for 6-8 weeks a year, starting around late January. What are we to do for the rest of the year?
Back in 2010, Keebler had the answer. They started making their Coconut Dreams cookies! Keebler was the first, but the others weren't too far behind.
Today we're going to be trying the three different versions we could find and see which one is the winner! 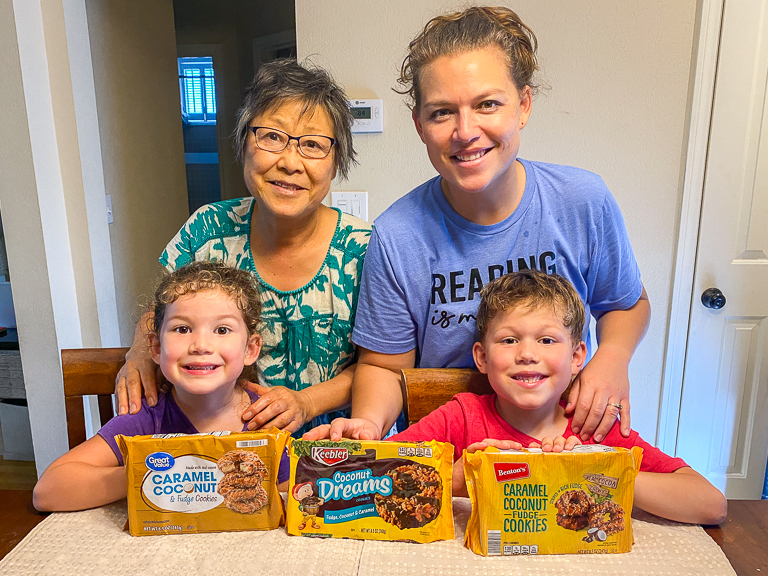 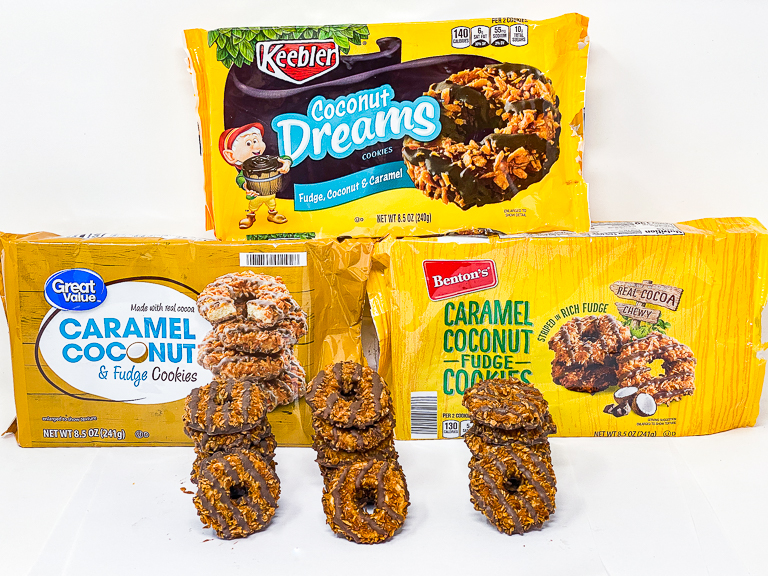 We're doing this taste test in August and despite checking around, I couldn't find anyone who had any Samoas still in their freezer. I'll just pull some pictures from the Girl Scouts website to see what the original cookies look like. 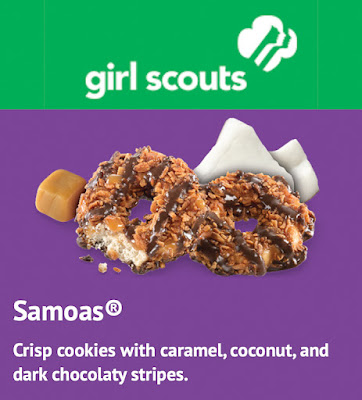 Taking a look at all the challengers, I think they all took a page out of the same book. All the plastic trays are identical, 3 columns with 6 cookies each. 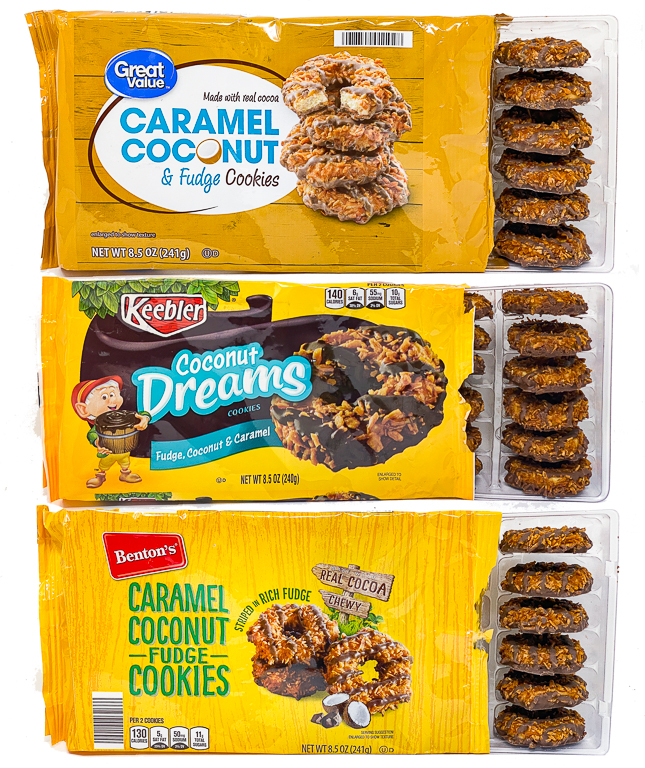 The Great Value cookies are manufactured in Bentonville, AR. 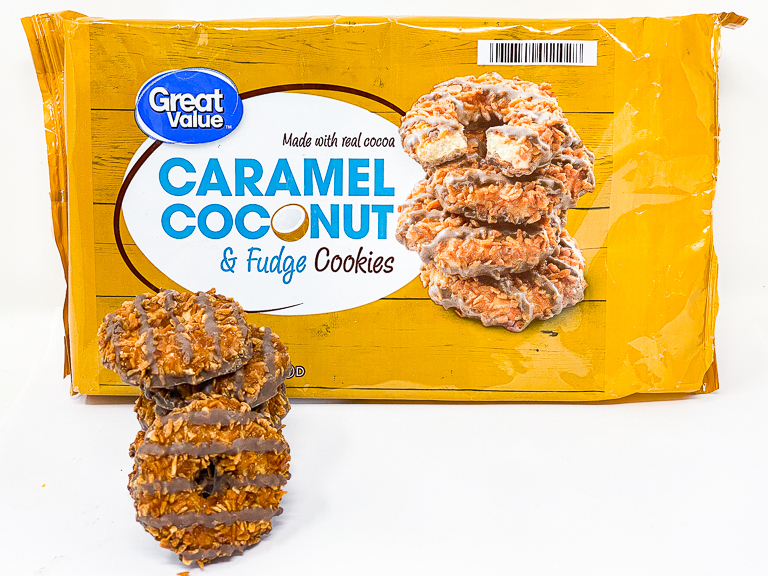 These Keebler cookies were made by Ernie and the other Keebler Elves in a tree in Battle Creek, MI. 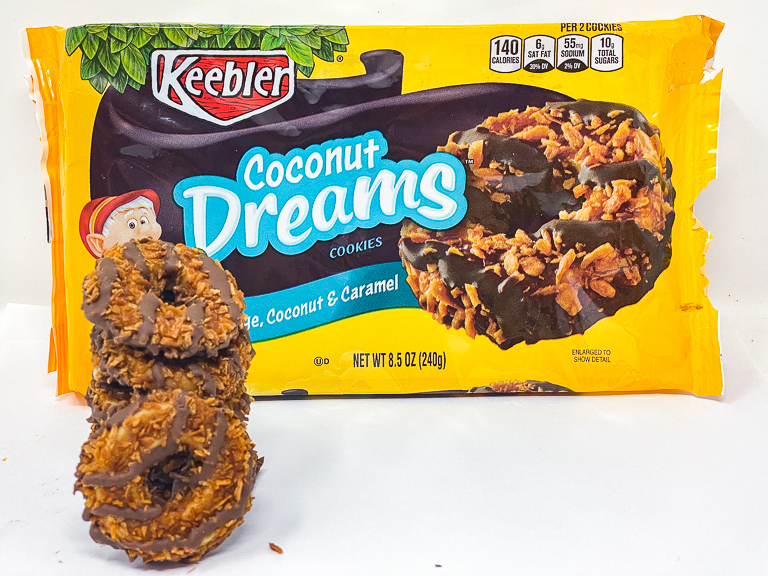 The Benton's cookies are made for Aldi in Batavia, IL. 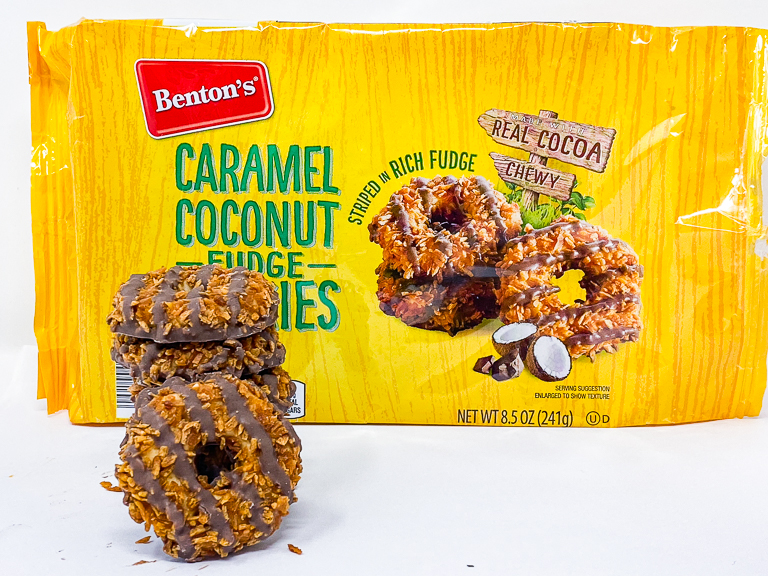 Putting them all together, they look like they could have come off the same manufacturing line. 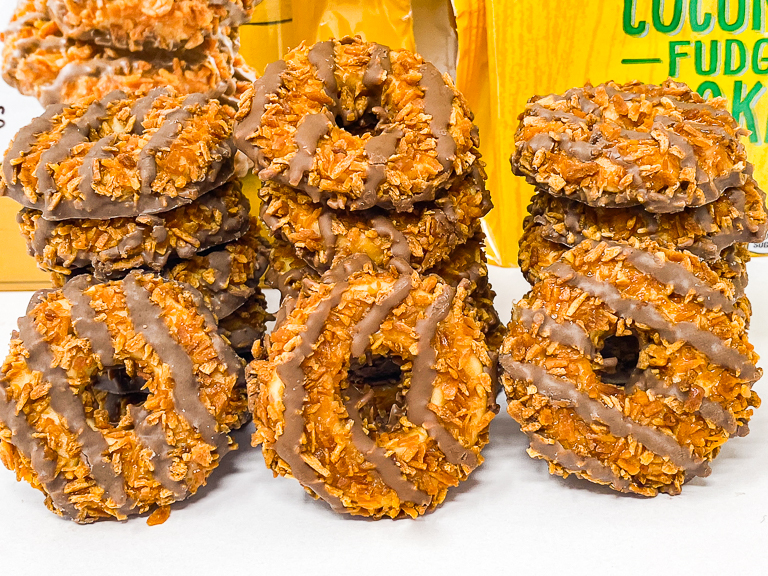 We've seen that they all look alike, but the real question is, do they all taste alike?
To answer that question, we're doing a blind taste test. Plates are labeled 1, 2, 3, and no one knows which brand is which. 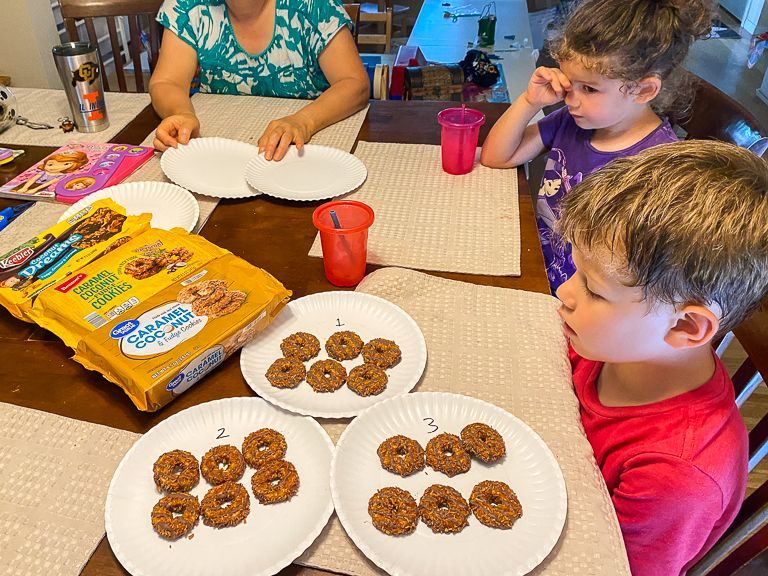 We all sampled cookies 1 through 3, giving feedback on each one. Sometimes going back and taking extra nibbles off one we'd already sampled. 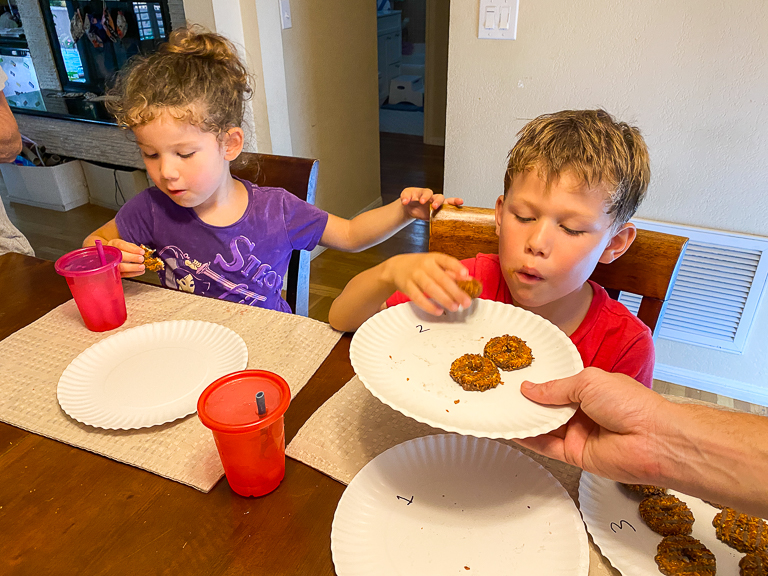 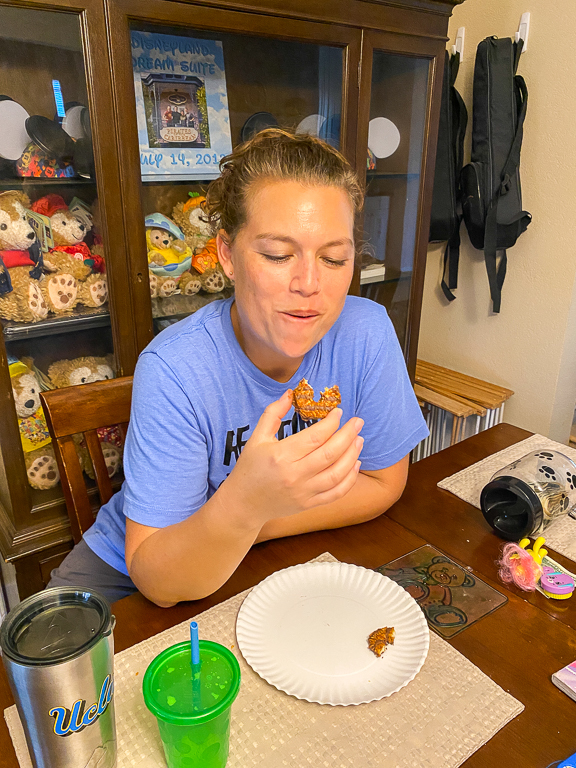 Here's my cookies. It's time to vote. Well there's one of these cookies that I really don't like. The other two are very very close. Between the two of them it's hard to pick a favorite. 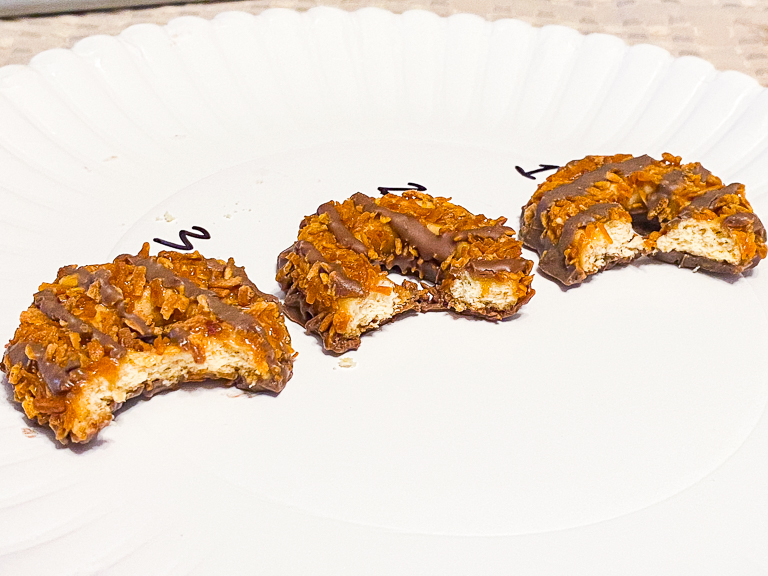 Alright, on the count of three, everyone hold up which number you like the most.
The votes are in.
Richard, Chi, Ian - Cookie #1
Theresa, Alli, Joe - Cookie #3
There's no votes for Cookie #2. It had a really off flavor. All these cookies came from the store recently and they're non-expired, so there shouldn't have been any of those issues. 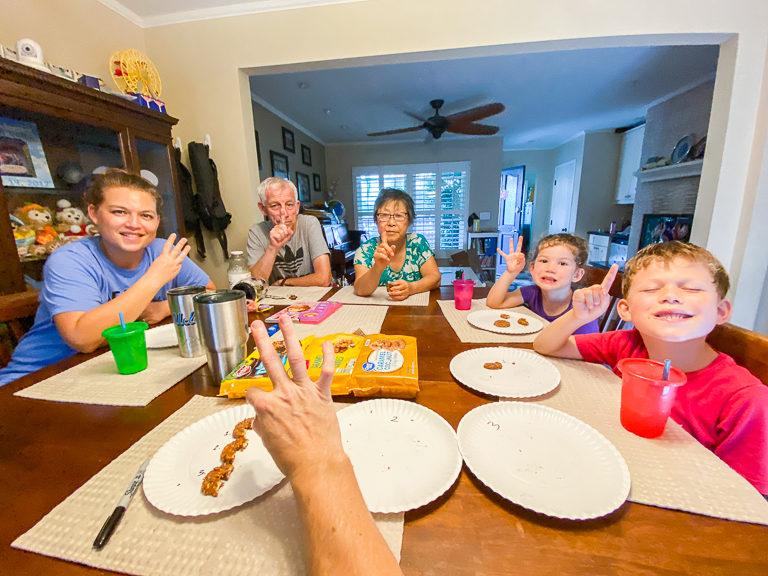 Time for the reveal.
Ouch! Cookie #2 was the Keebler Coconut Dreams.
The two winners for this taste test were the cheaper store brands. Both the Benton's and Great Value brand cookies tasted great to us. I was checking the manufacturing location on the packages just because they tasted so much alike. 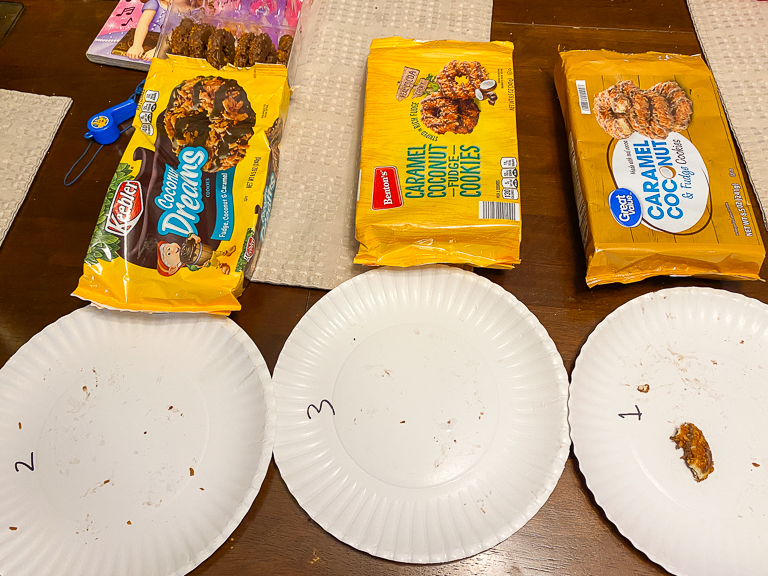 Theresa was happy that her favorite is the cheapest cookie! 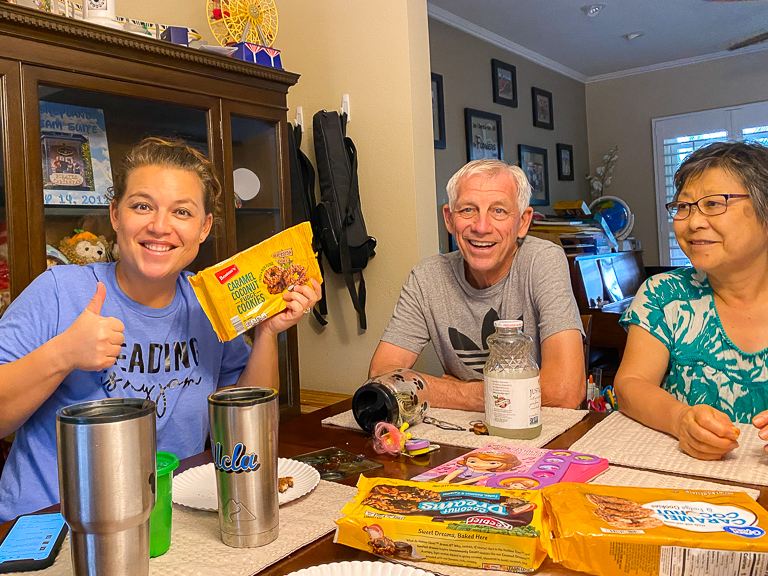