These kids love their Saturday morning cereals. Especially the ones that have marshmallow in them. Their favorite so far has been the Chocolate Frosted Flakes with Marshmallows. When I saw these Froot Loops with Marshmallows I decided to give them a try. The kids are still in their PJs but they're ready for a taste test. 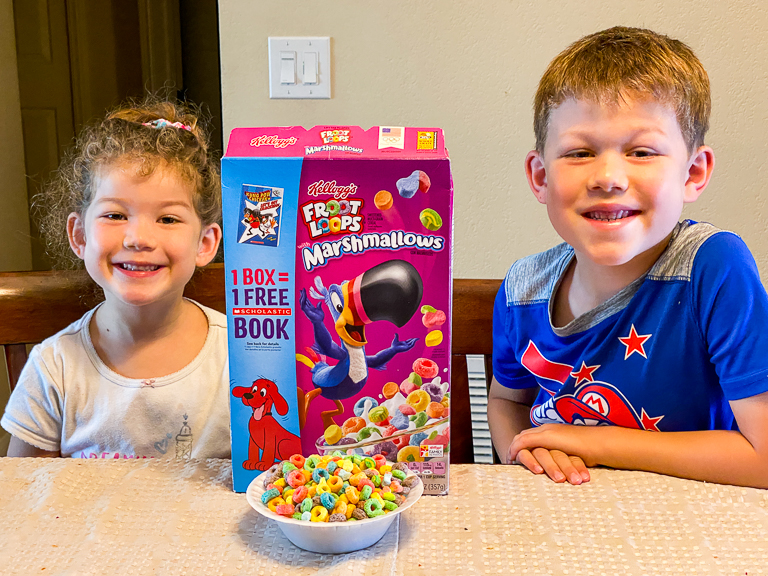 Froot Loops have been around since 1963, and Toucan Sam has always been the mascot. Originally it was only 3 colors, red orange and yellow, but in the 90s, green blue and purple were added. Let's take a closer look! As Toucan Sam would say, "Follow my nose! It always knows!" 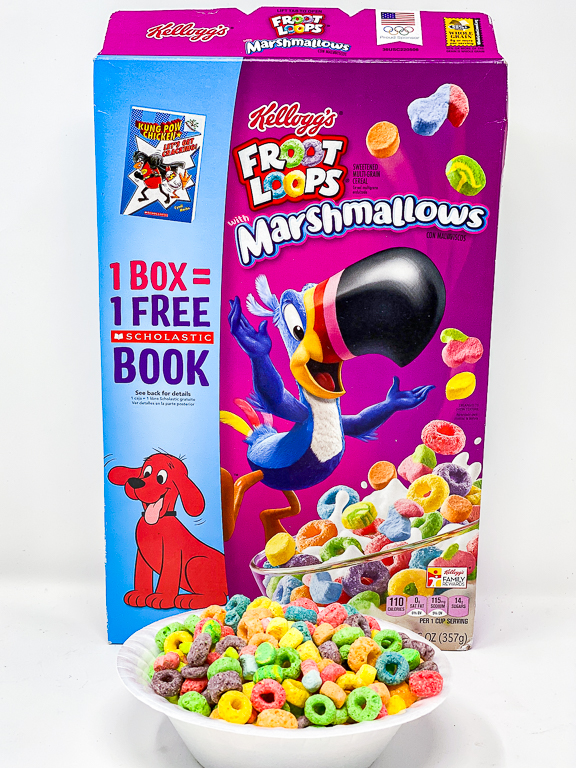 It's fun that these aren't just generic marshmallows either. These actually have a shape to them. I think that blue/red one is even supposed to be Toucan Sam. And they did a really good job on the cherry one too. I get the orange marshmallow, as well as the lemon, but what is the swirled green/yellow one supposed to be? 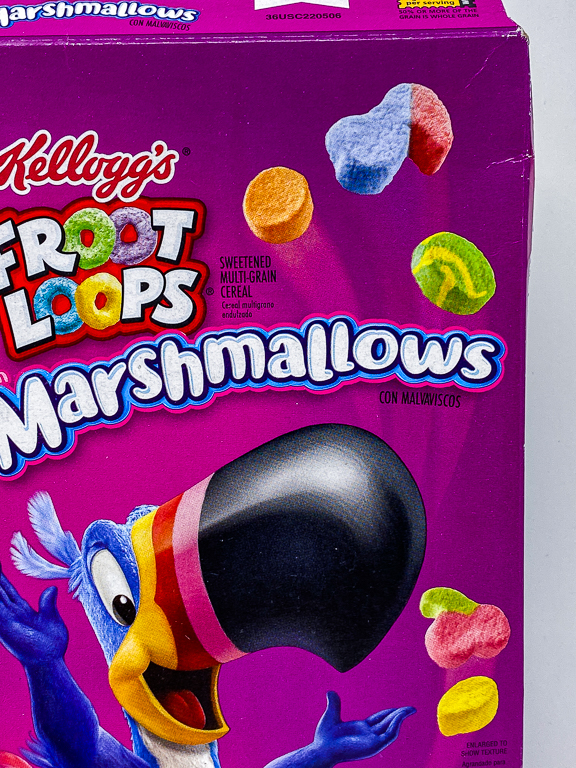 And I don't know why it's still stuck in my head, but every time I see Froot Loops, I think of The Onion article I read in college about how Surgeon General Mills Recommends 3 to 5 Servings of Froot Per Day. Either straight off the vine or in "loop" form. 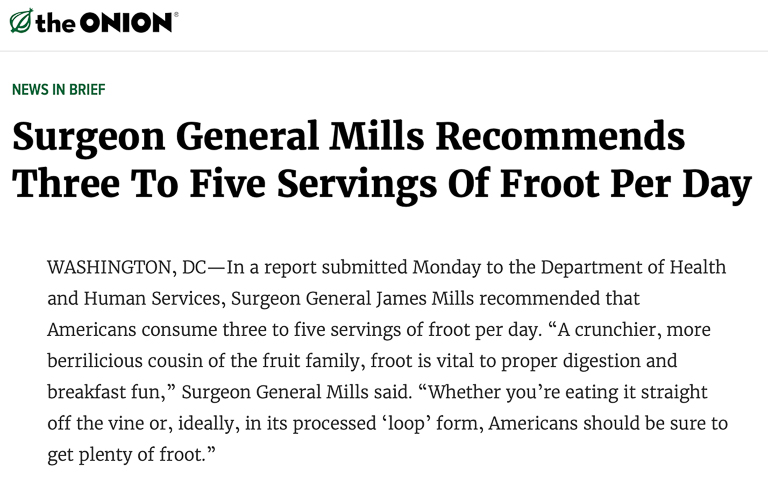 The side of the box.

Now a lot of times the pictures on the box aren't a good representation of the actual product inside. I have to say though, they did a pretty good job staying true to the shape. And again, those cherries look great. 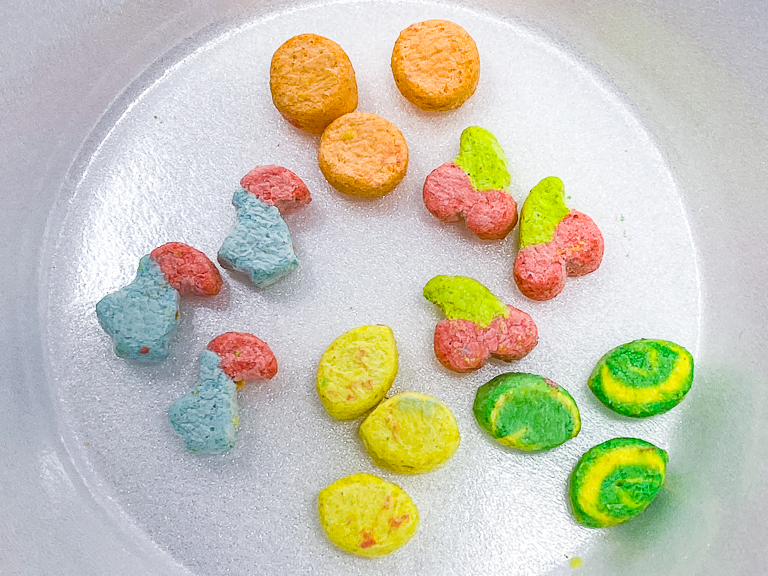 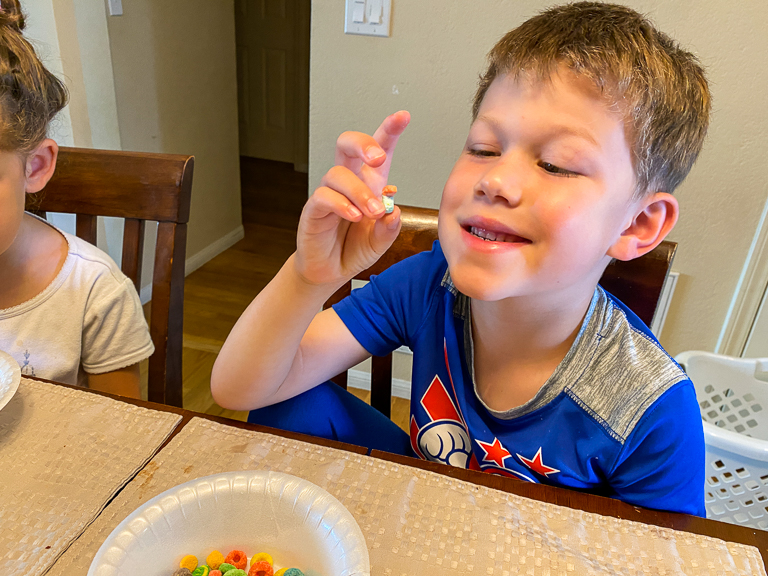 Checking out the cherries. 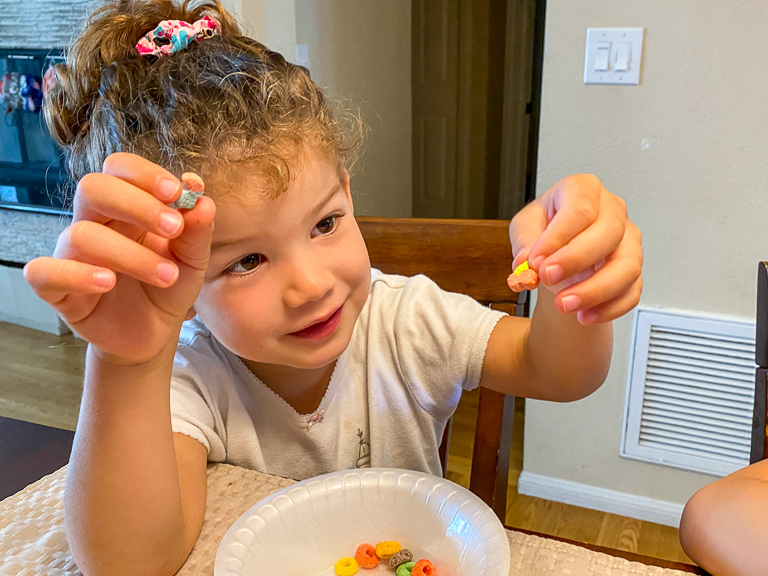 Alli likes hers with milk. 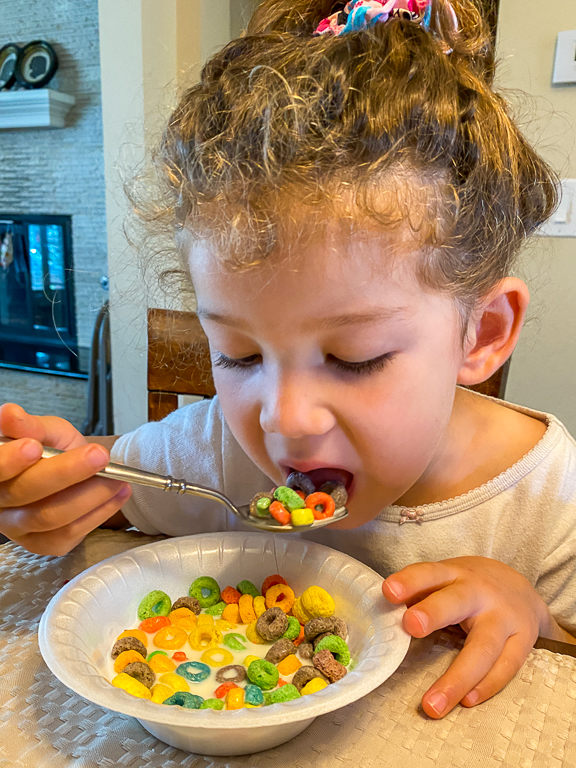 Ian pulled out all 5 marshmallows and all 6 loops to make a rainbow. Very nice Ian. 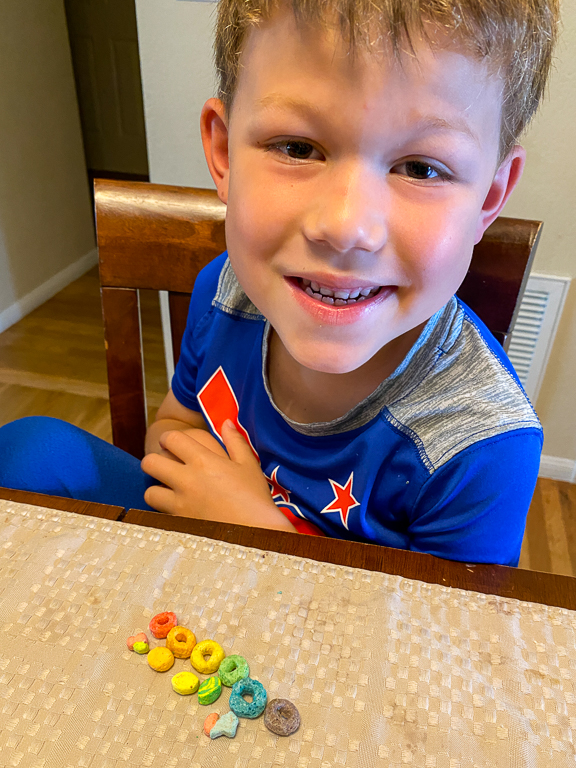 Ian asked me were the purple marshmallows were. That I don't know. 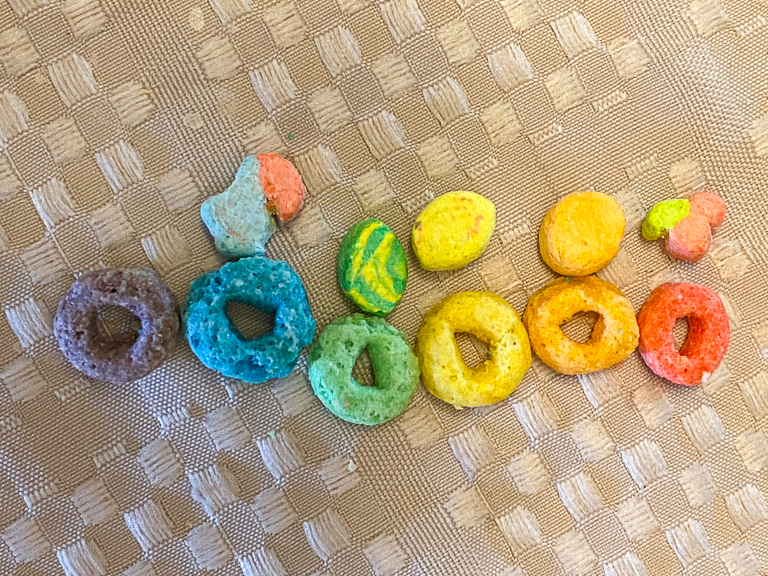 It's been so long since I've had Froot Loops. They certainly are a colorful part of this complete breakfast. 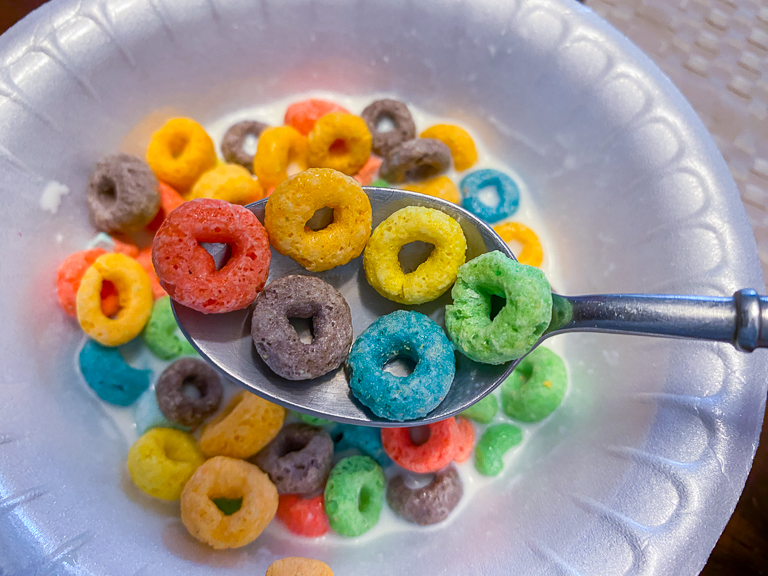 Hey Alli, what are the 3 Primary Colors.
Alli - Red, Blue, and Yellow.
Very nice. Now Ian, what are the 3 Secondary Colors?
Ian - Orange, Purple, and Green.
Excellent. It's breakfast and it's science. 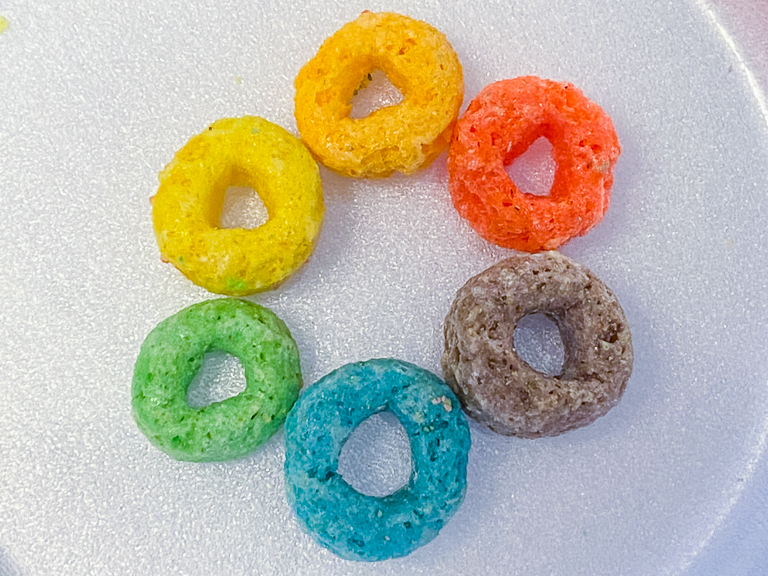 Time to rate them.

Everyone thought they were pretty tasty, but still not quite as good as those Chocolate Frosted Flakes with Marshmallows. Well, we'll keep trying. We might be able to find something. 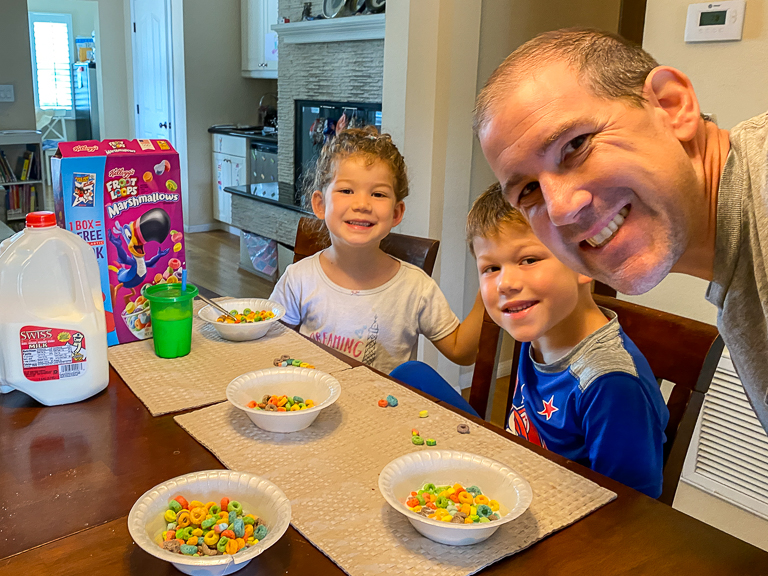 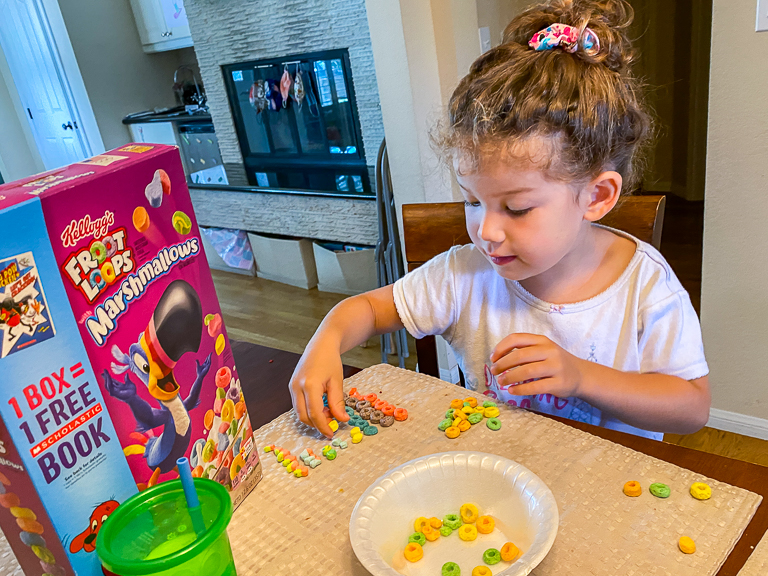 Yes, you certainly are. It's the start of a great day! 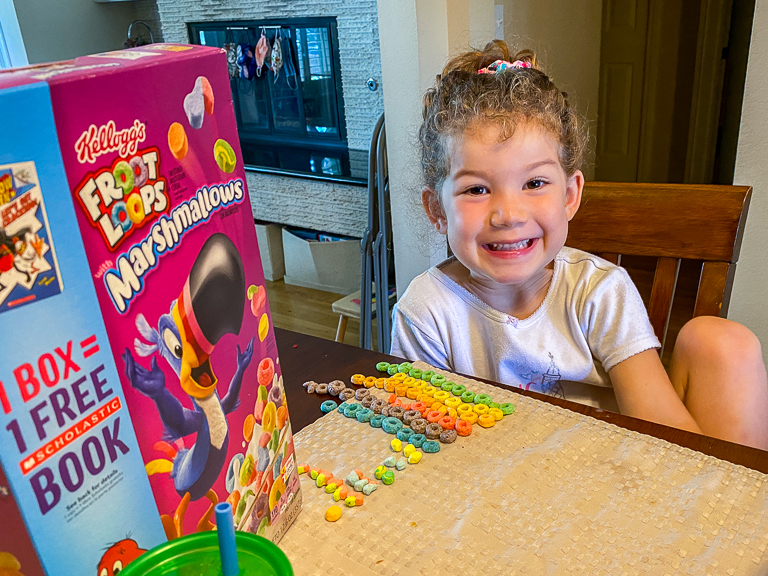