Happy Birthday to me! We're at home, but we're still going to turn it into a fun time! 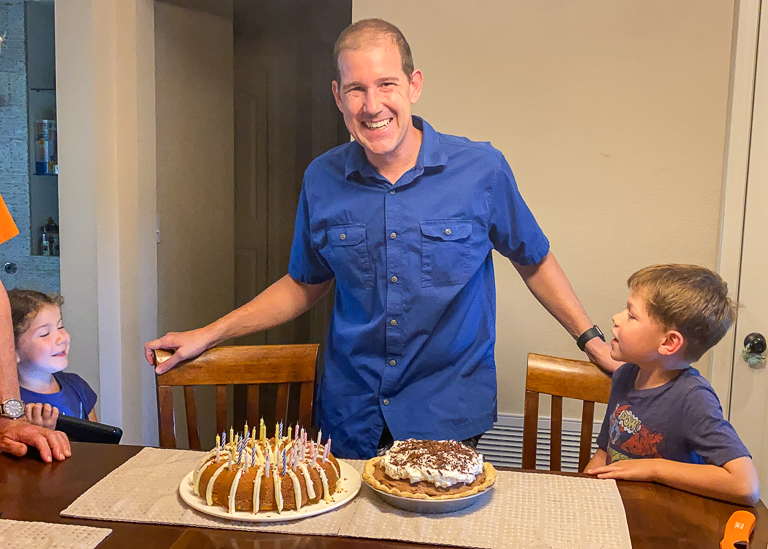 The kids have been excited for my birthday for a while. Ian designed a new game for me, complete with a set of instructions.
- 20 Spacis
- Lose a turn box
- Go back 6 spacis if you don't find the kea 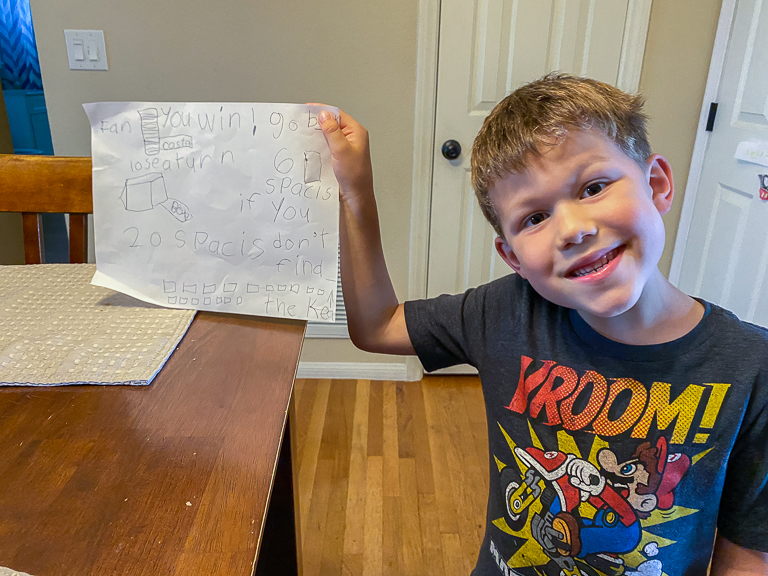 You get to pick the color of your dice, then you roll and move forward that many squares. 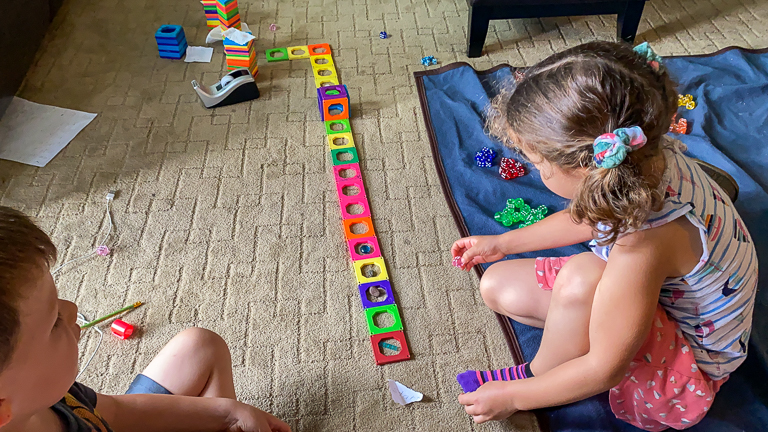 If you land in the box, you lose a turn. Once you get to the end, there is a key inside one of those towers. Ian claims he closed his eyes when putting the key in, so he doesn't know which one it ended up in. It's covered with a sheet so you can't see where it is ahead of time. And if you guess wrong, you move back 6 spaces and then get to try again.
Fun game design Ian! 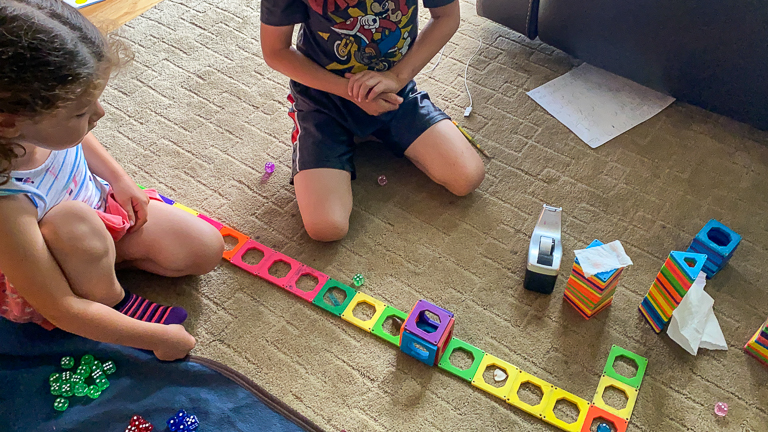 I took the entire day off work so me and the kids just made a whole day out of hanging out together. I had them grab Disney books and we hung out on the couch reading books together. 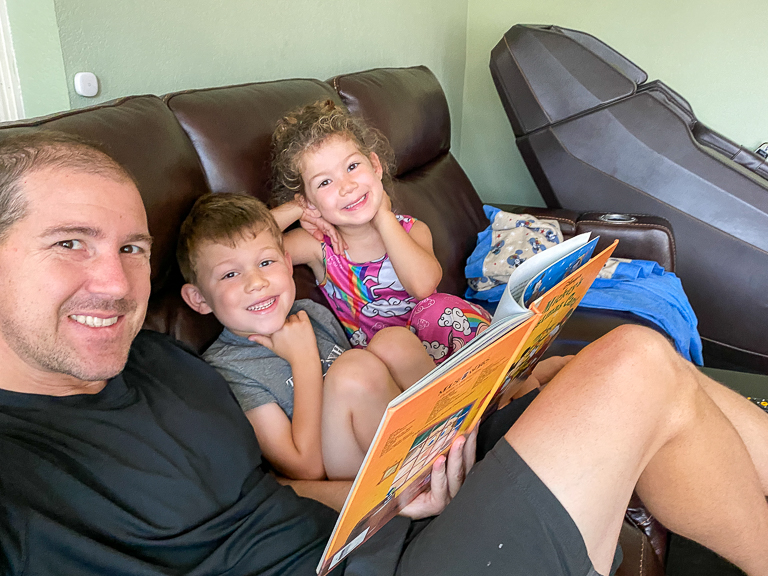 Because we couldn't go to Disneyland, the kids made me a Disneyland castle out of magnet tiles. Plus they found all our Disney magnets, including the tiny one we'd put on our calendar if we were going to Disneyland. 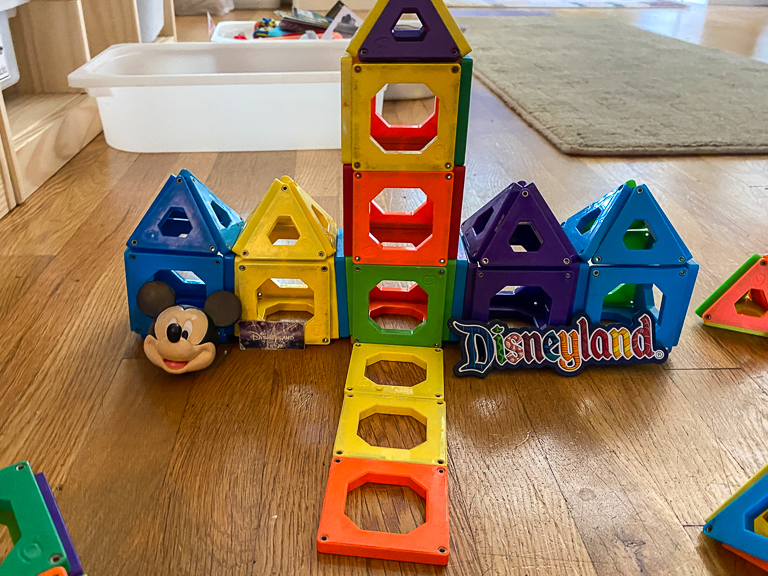 There's even fireworks to celebrate!

I pulled out a few fun games for us to play together too. Like Ladderball. Ian and I had some pretty good games with him winning some and me winning some. 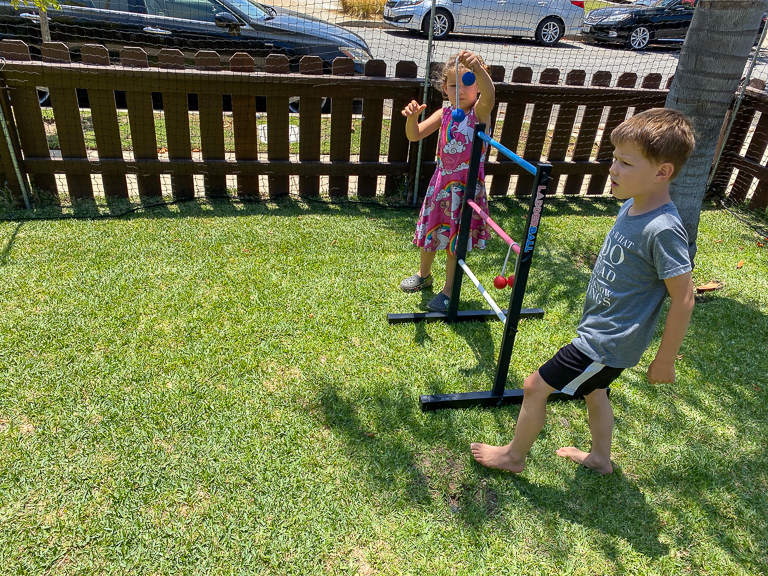 During our weekend clean-up, Theresa came across the BINGO game that usually only comes out during Christmas. The kids saw it and wanted to play, so of course we did. Everyone likes BINGO. 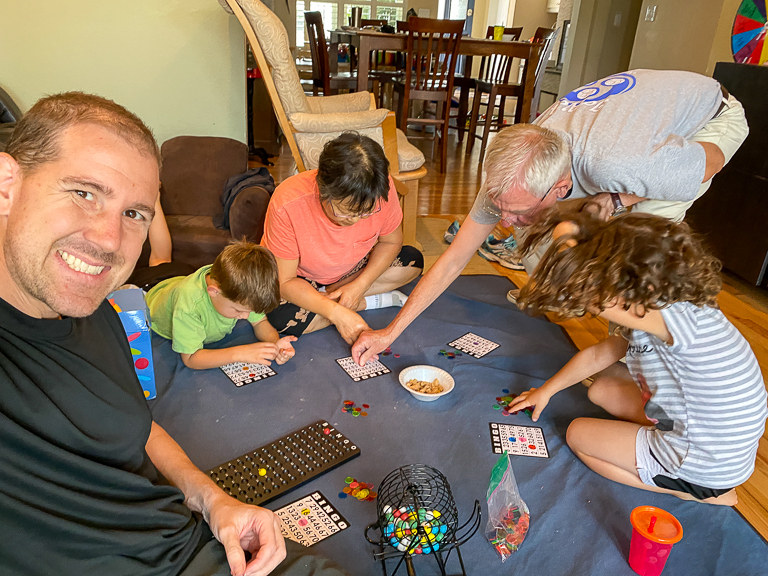 And I even pulled out my old Xbox and Dance Dance Revolution mats. The kids had a lot of fun dancing to the songs. 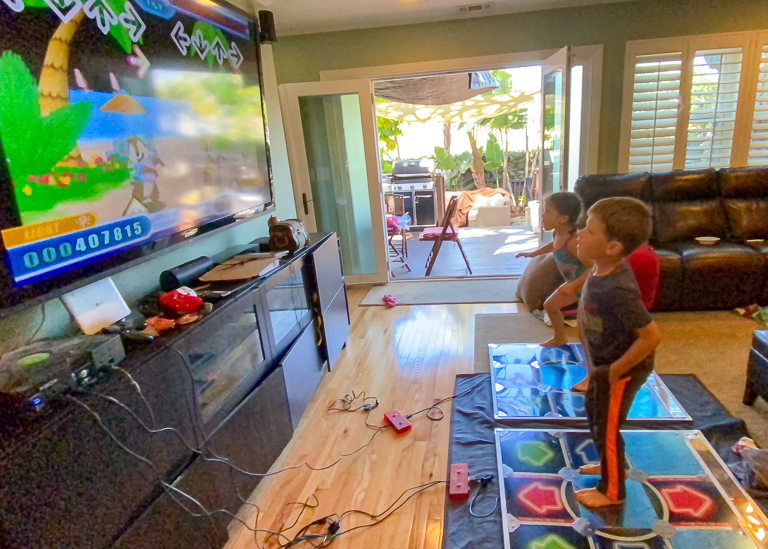 Because my birthday is on a work-day, we're splitting the celebration between now and the weekend. Chi knows I love her homemade chicken nuggets and her steamed mandu, so she took over dinner tonight. 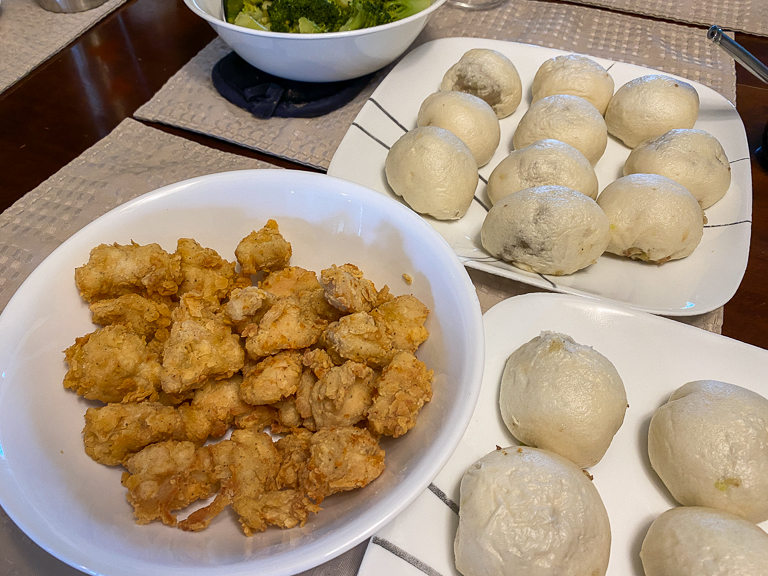 I made a tasty plate out of it. And look, there's even fruit and vegetables. Maybe I really am growing up. 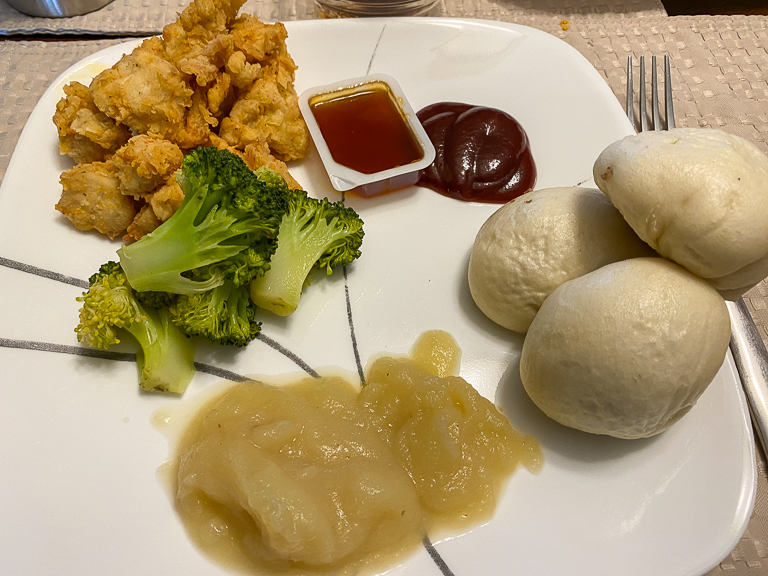 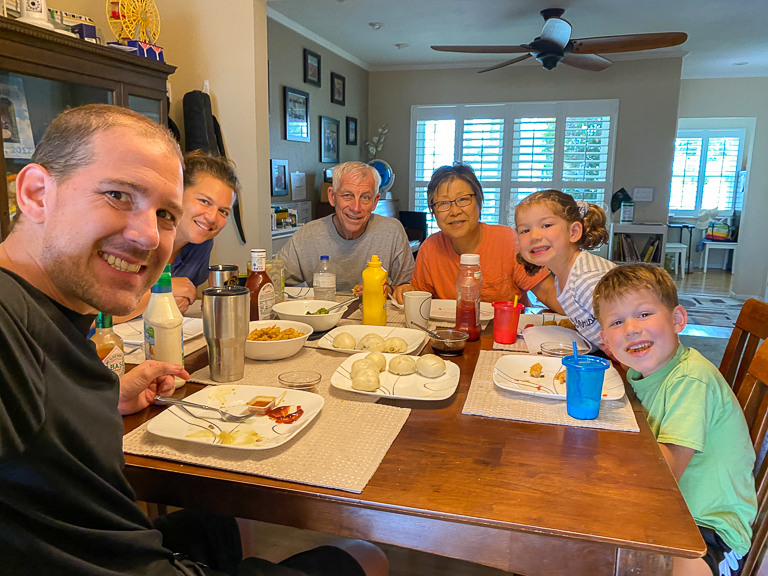 Along with getting lots of texts, phone calls, and FaceTime messages throughout the day, I also had a video meeting with all the Flowers family. It was great to see everyone, plus they made a very special video gift for me. Thank you all for contributing to it! It was really special, and thank you Patrick for putting the video together. 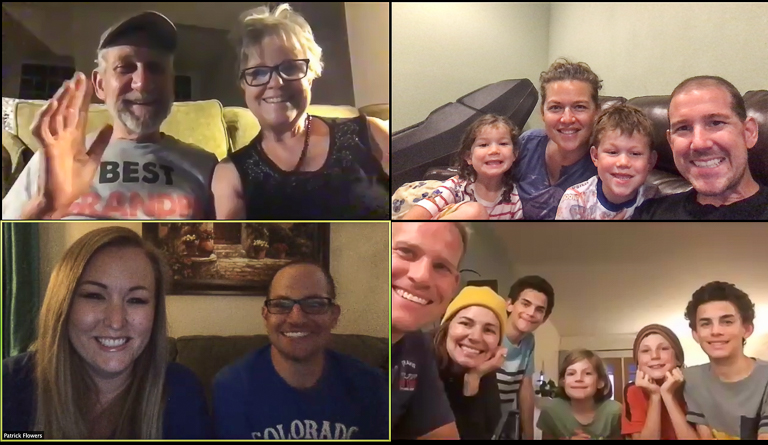 The weekend finally arrived. Theresa asked my what kind of cake I wanted for my birthday. To me, I think a birthday cake should have confetti. 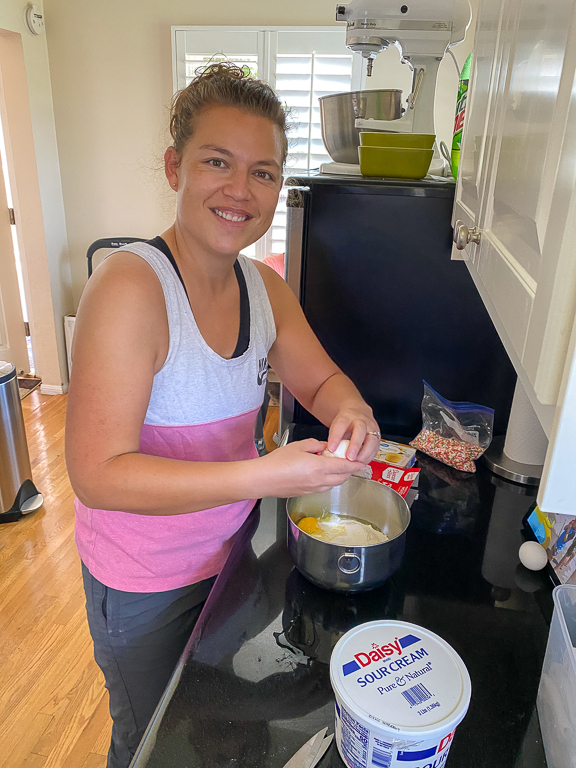 And so, I got a big confetti Bundt cake. 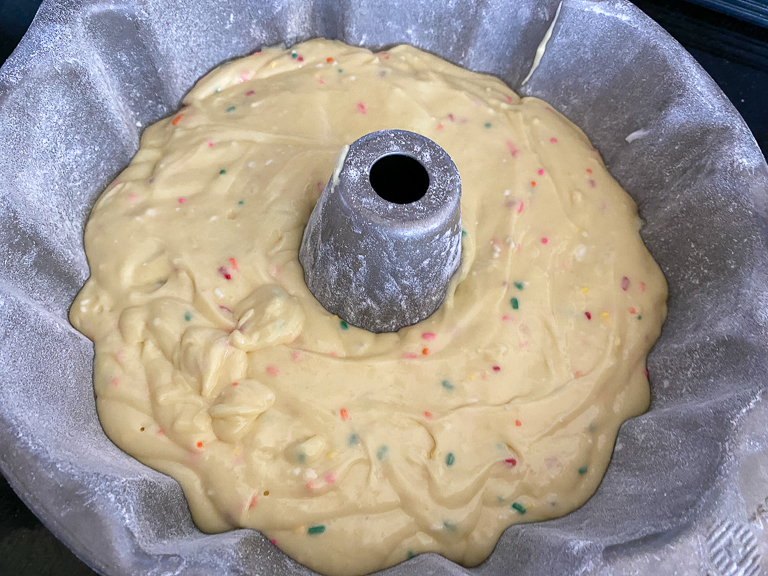 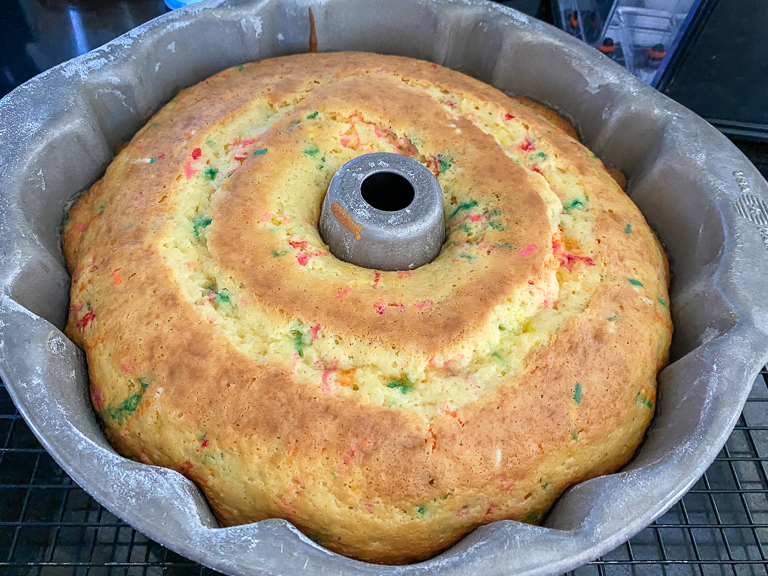 After a tasty dinner of Napa Rose made at home, it was time to open presents!
The kids bought me stuff with their own money. Ian got me a rearview helmet mirror for our bike rides. Alli got me silicone spatulas for me to do more baking things with. Perfect! I can use both of those things! Theresa got me a pizza pan so now I can have two pizzas going at once in the oven, instead of having to make them one at a time.
Originally Ian had a present for me earlier in the week for my birthday. When he learned that we'd be celebrating on the weekend, he said:
Ian - Oh, we're not opening presents until the weekend? My present might be dead by then.
Uh... what have you got for me in there buddy? Turns out it was a flower and some mint leaves. 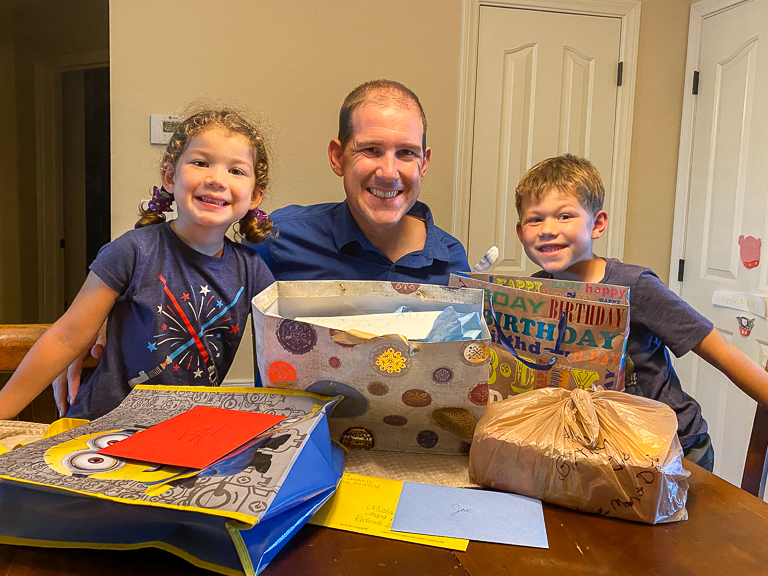 There were other presents and cards too. Thank you everyone! And from my parents, chocolate oranges! 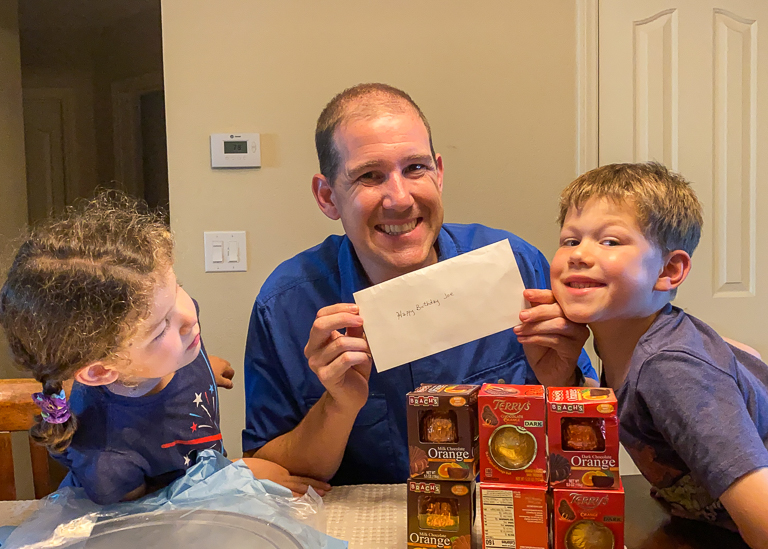 Ian and Alli also made me adorable cards.
From Alli, lots of hearts and smiles. 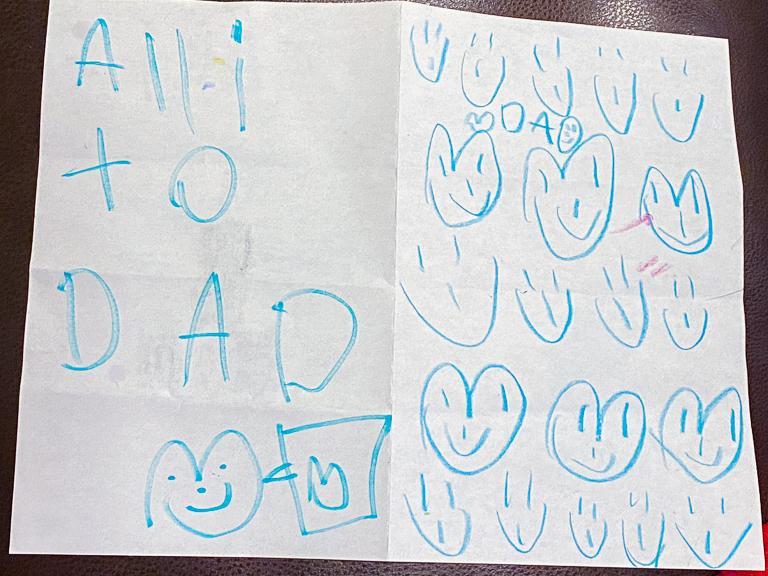 And on the inside, a portrait of me surrounded by hearts. And I guess the Dance Dance Revolution made an impression on her because she re-drew the dance mat on the inside of the card for me. 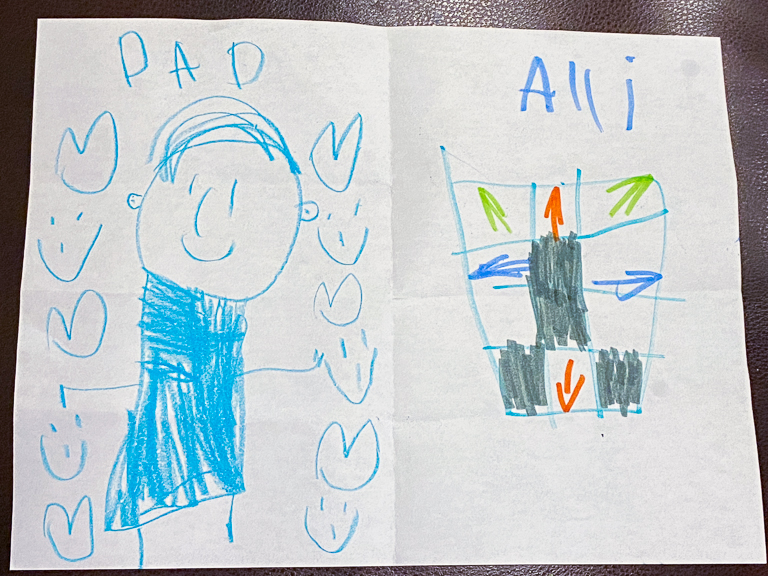 Ian is being really creative, making me a card with lots of activities on it. There's a challenge where I'll need to make 5 words out of the letters "COTTON CANDY". 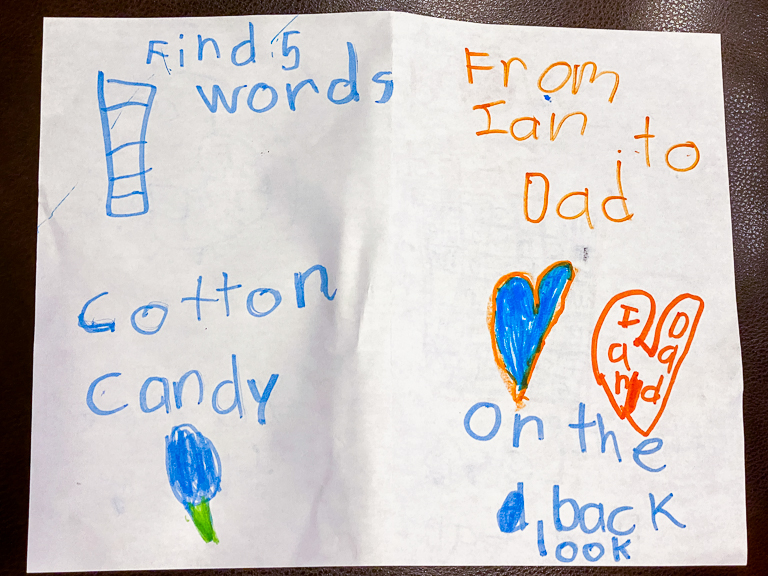 And he told Theresa that we worked for a while to make that Word Serch puzzle. I've got to find the words HEART, LOVE, DAD, and IAN. He even taped a crayon to the inside of the card for me to use. 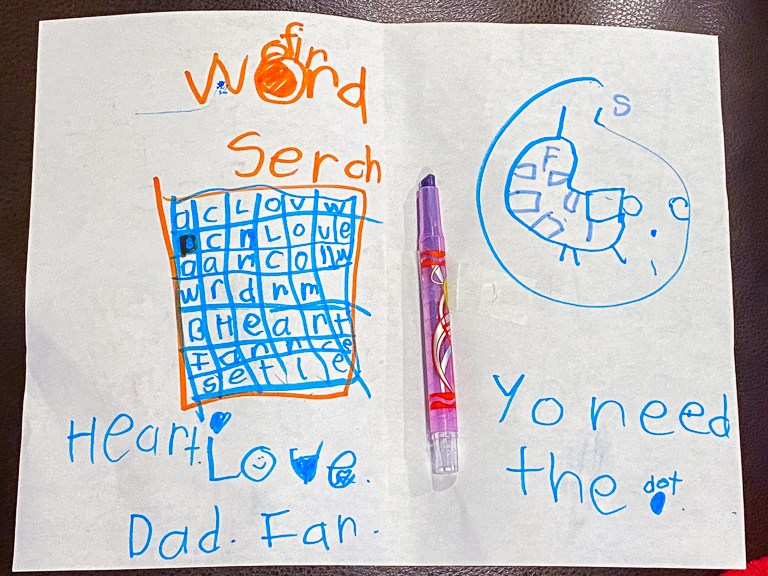 And now it's time for cake.
After cooling in the fridge, Theresa frosted the top of it. Then both Alli and Ian helped add a few more sprinkles to it. 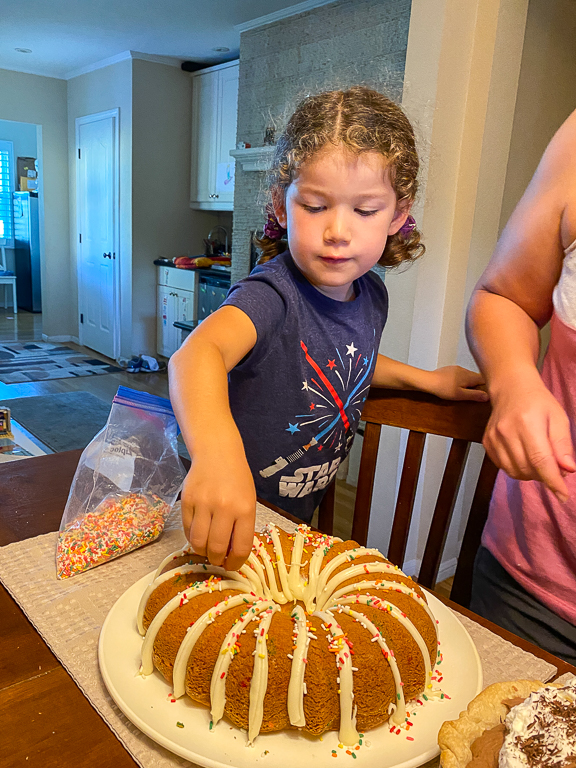 Yum! It's going to be tasty! 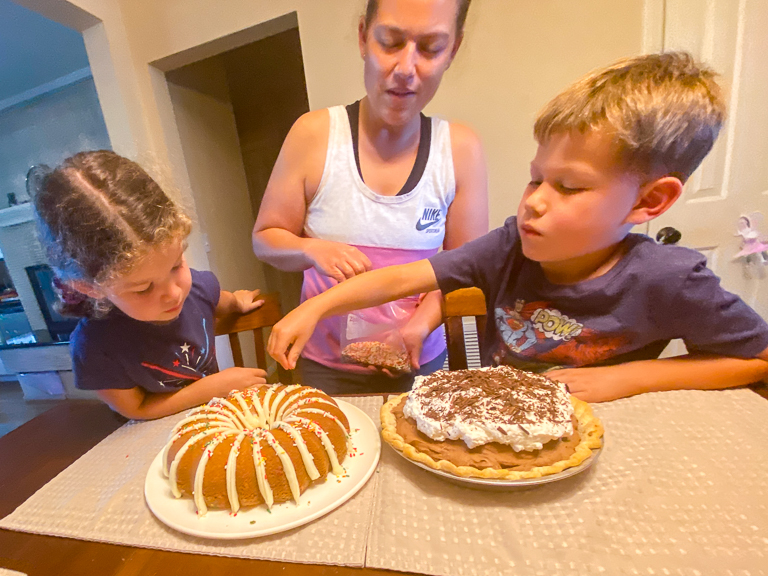 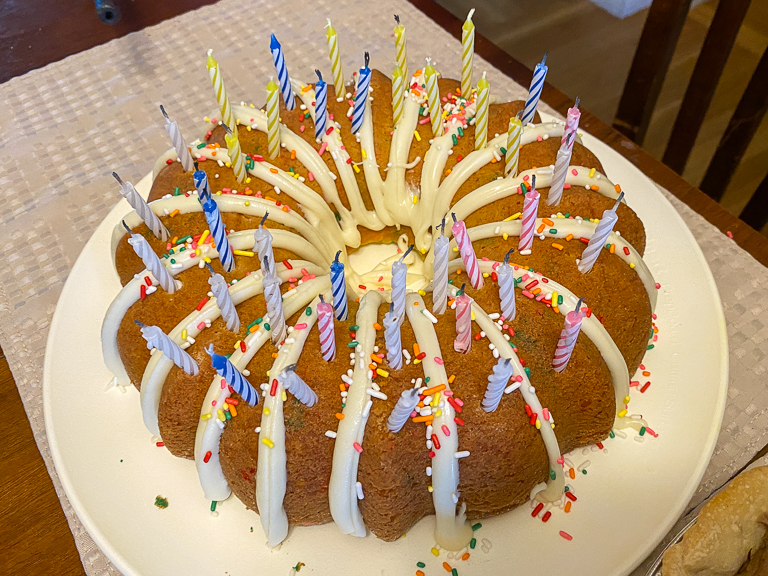 I get birthday cake and a birthday pie! Aren't I lucky!

That's a lot of candles to blow out. While Theresa was taking a video, Alli went and grabbed her iPad to also take a video. I might just have a mini-me.

Theresa served everyone a slice from each. Thanks for making it Theresa! 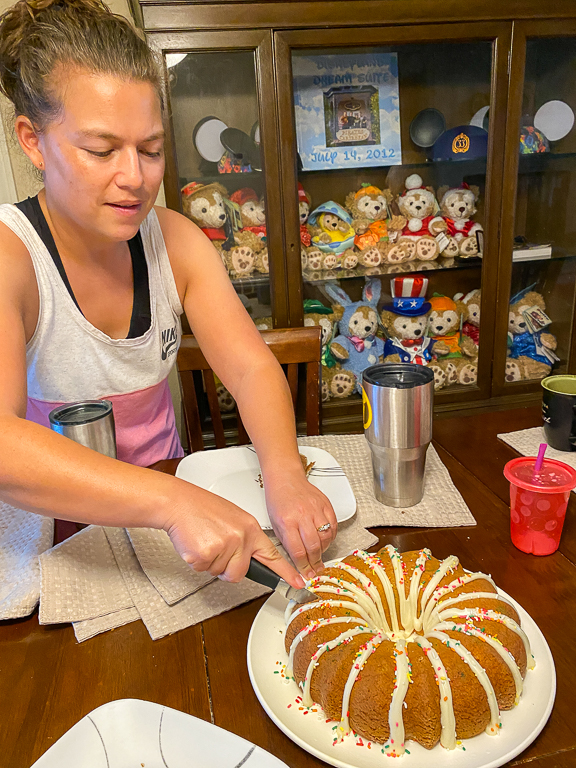 The cake was delicious! It was an awesome few days spending time with the kids, hanging out with the whole family, and hearing from everyone. Even though it's not what I was thinking my 40th birthday would be, it still turned out to be pretty fun! 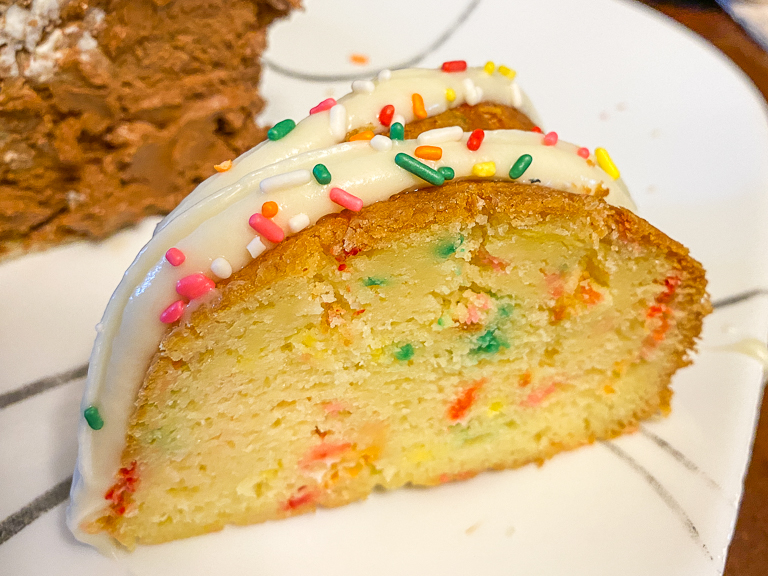