Tonight we're recreating a Southern Californian original. El Pollo Inka is a Peruvian restaurant, started in 1987 in Lawndale California. Theresa and I end up going here a lot for their lunch specials to break up our work day. Their food is pretty delicious, so I think I we're going to take a shot at recreating it at home! 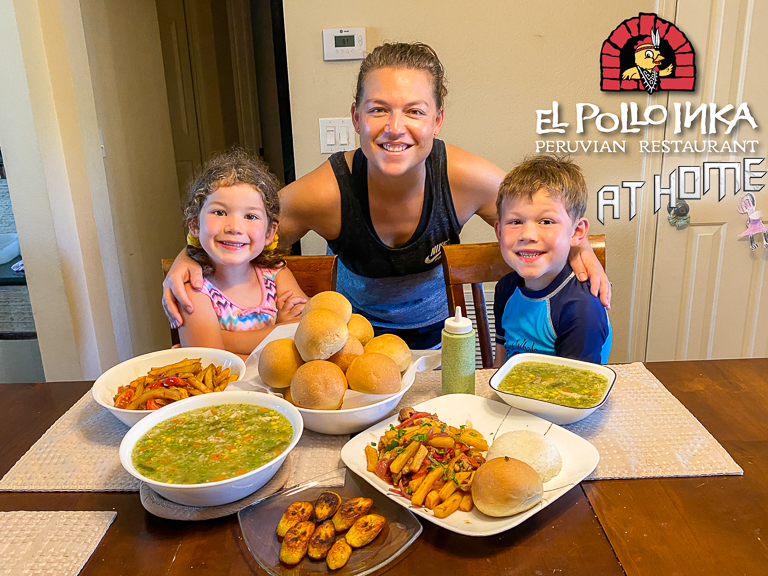 What is Peruvian food? According to the El Pollo Inka website About Us page, it's one part Inkan, one part Spanish, with a sprinkle of African, Chinese, and Italian influences.
Here's what awaits you when you arrive.
As soon as you sit down and order something, they will quickly bring out Bread Rolls with butter and their Aguadito de Pollo, a chicken rice and cilantro soup. They'll also bring out their delicious green Aji Verde hot sauce.
For the entree, Theresa and I both love their Saltado De Pollo. It's got Sauteed Chicken, red onion, tomatoes, and french fries. Our very first time there, Theresa and I were both surprised it came with rice too. Starchy french fries and starchy rice. Okay!
For dessert, if we're feeling celebratory, we'll get their Plantanos (fried Plantains).
All these pictures are from people who submitted photos to their Yelp page. 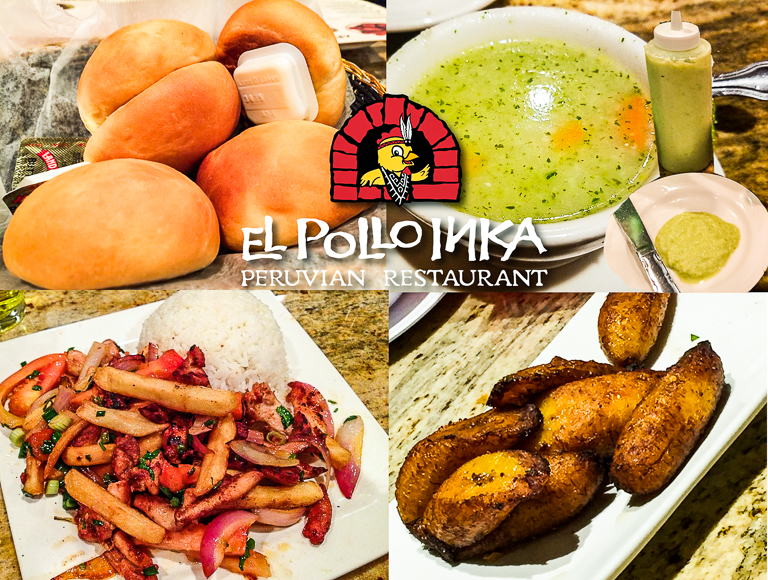 Let's get cooking!
First up, the Aji sauce. We're using the recipe for Aji Verde from cookieandkate.com.
We'll start with 2 jalapeños and 2 cloves of garlic. 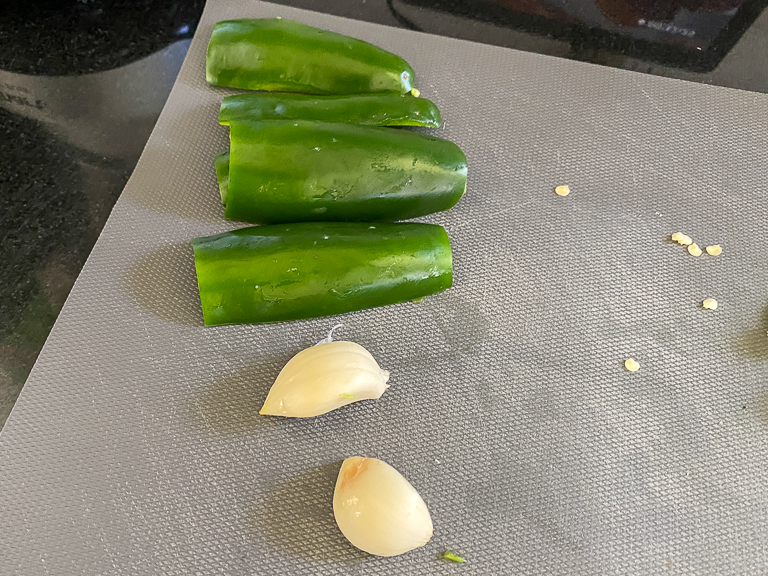 And I hope you like cilantro because this recipe calls for 2 cups of it! Plus a little mayo and parmesan cheese. 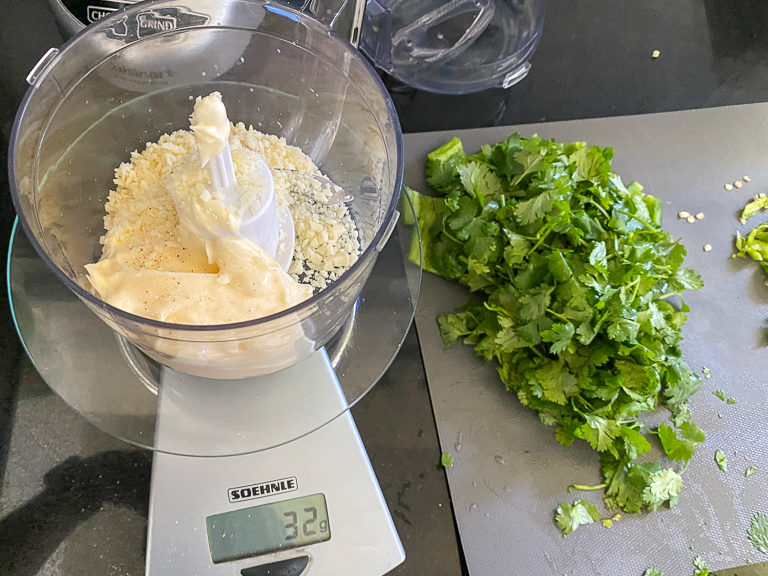 Theresa is squeezing some fresh lime juice for it. 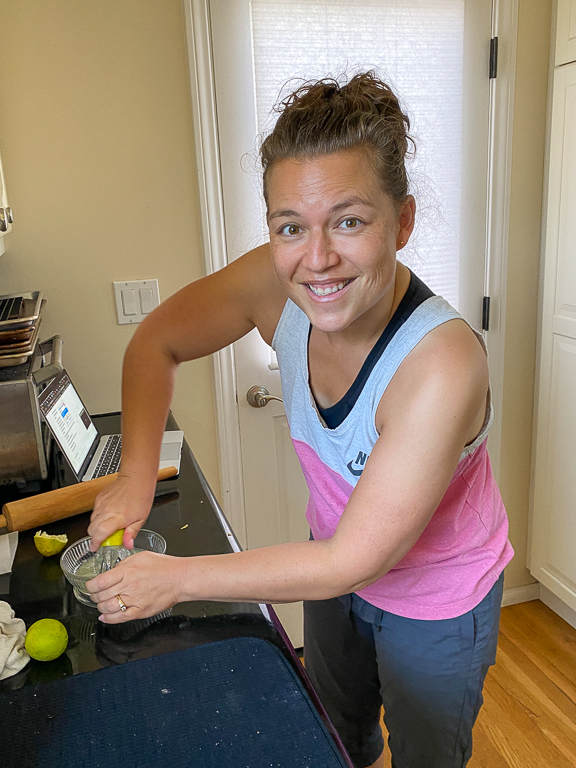 Theresa and I both tasted it and these jalapeños didn't have any spice in their skins. I ended up through the membranes and seeds from both of them into the food processor to bring up the heat a bit! 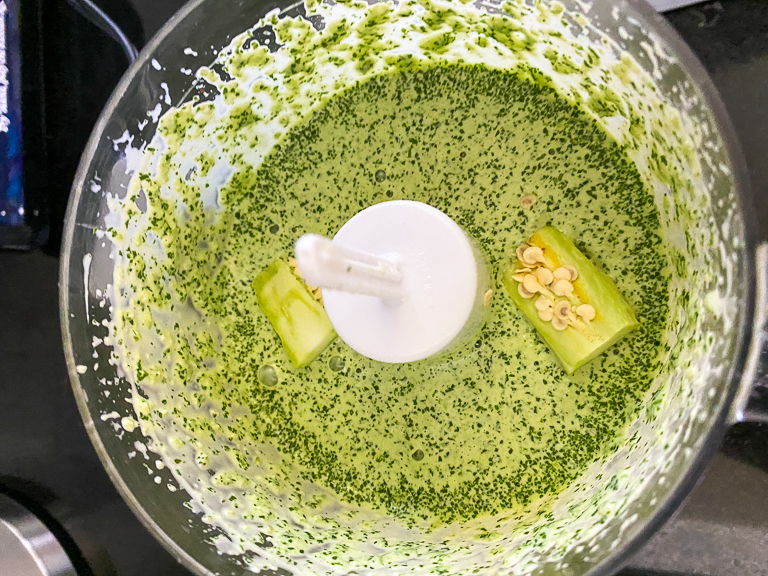 Theresa has been making the recipe for the Aguadito de Pollo for a few years now. It's pretty delicious. The recipe comes from AmericasCuisine.com and appears to come directly from El Pollo Inka. We usually make a double batch.
Theresa bought a rotisserie chicken from Sams Club just for this. The whole thing goes into a big pot. She's adding 12 tablespoons of rice. 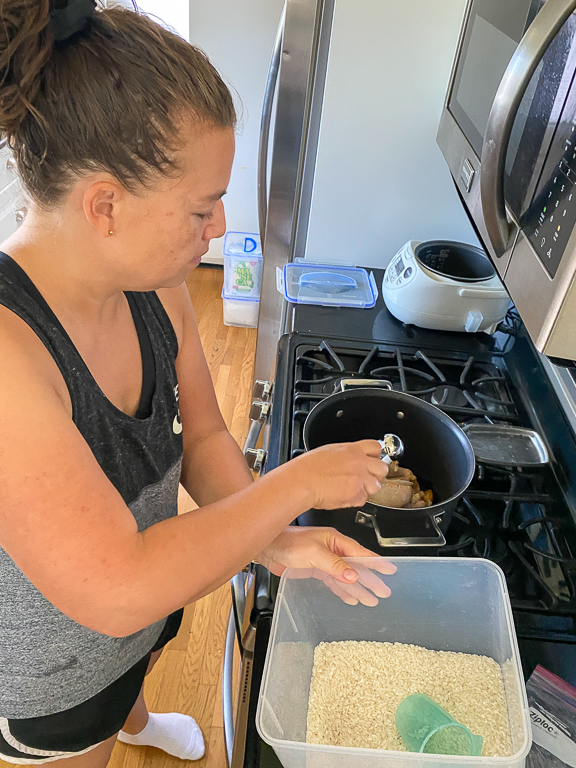 The whole thing boils for 30 minutes to bring out the flavors. 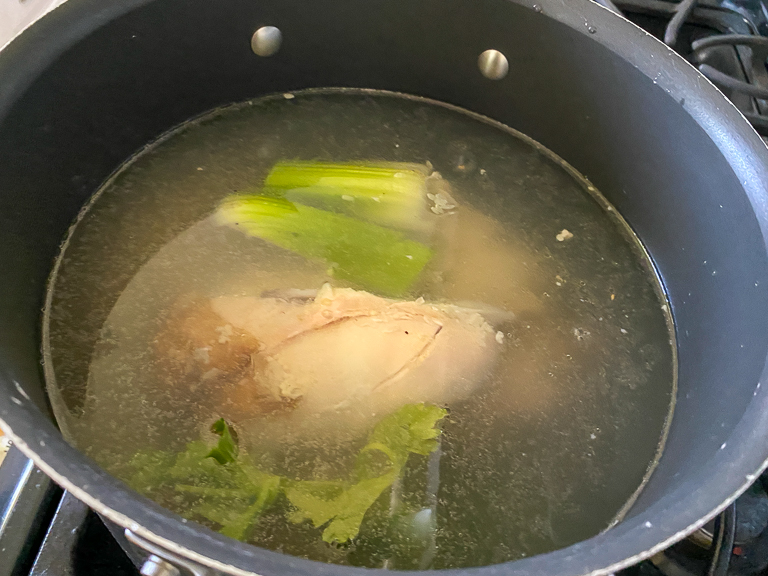 Then the celery comes out, as does the chicken. Theresa picked off the pieces of meat from the bones to add back to the soup. 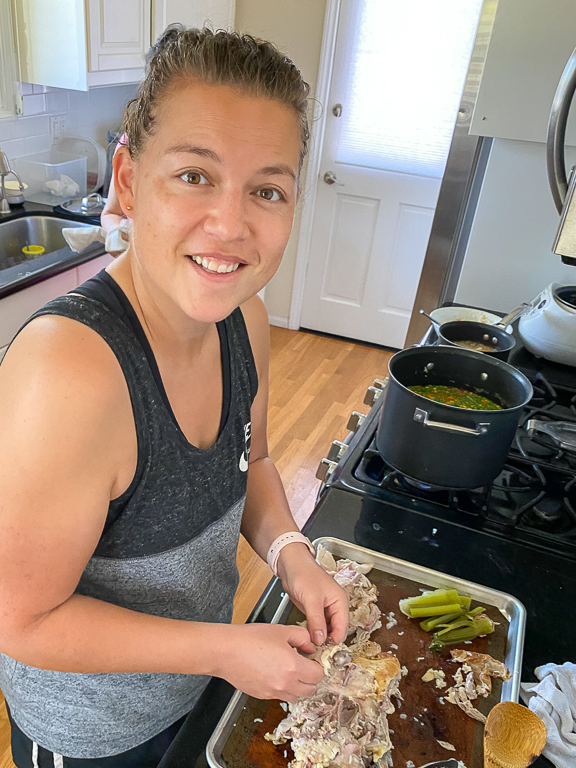 They use a lot of cilantro in these recipes. Theresa blended up quite a bit to add to it. 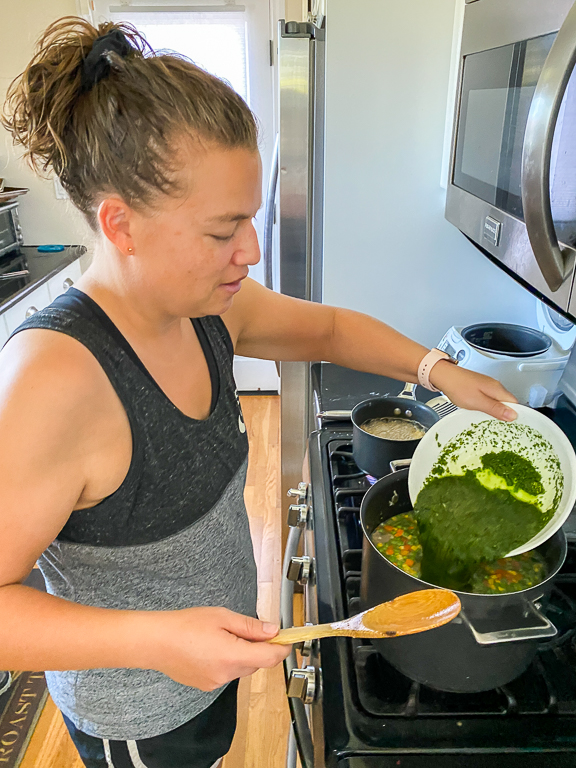 Did someone say bread? That's my thing lately. I've been making all kinds. We're doing dinner rolls and I found a great recipe for Soft Dinner Rolls from sallysbakingaddiction.com. 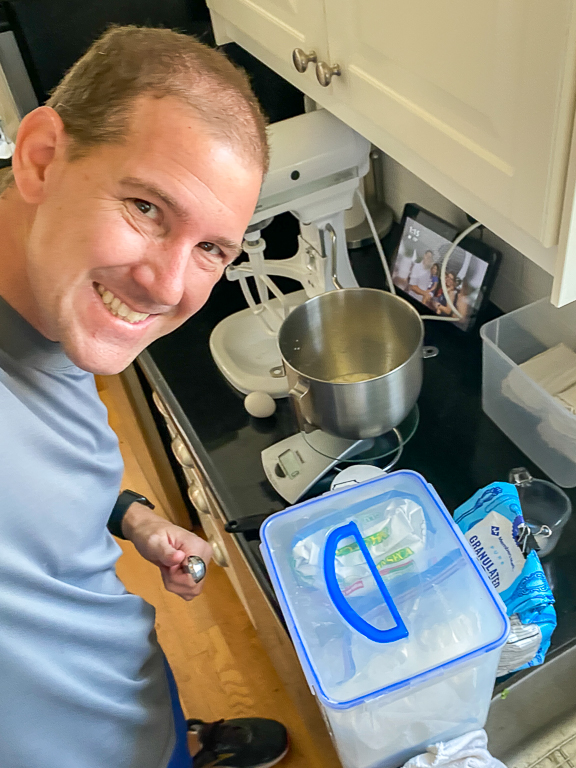 After mixing everything together and letting it rise for 2 hours, it was time to make individual rolls and then let them rise again. 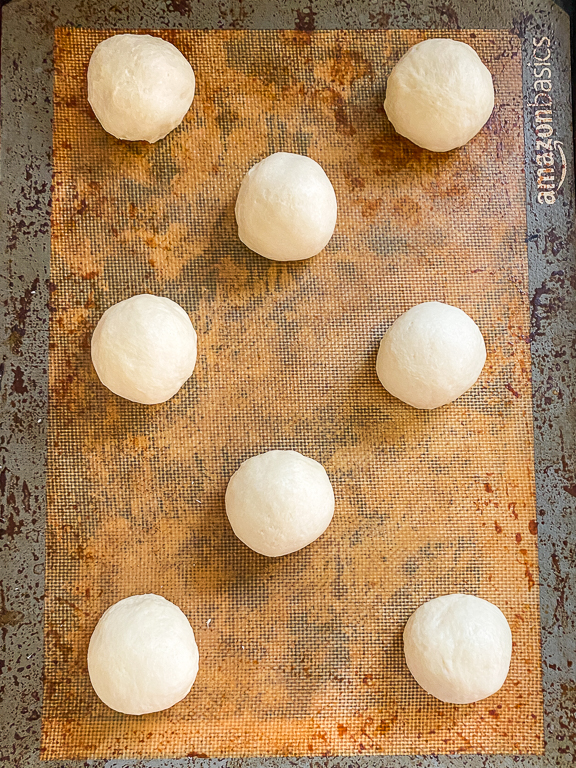 Sixty minutes later, they're fluffy and ready to bake! 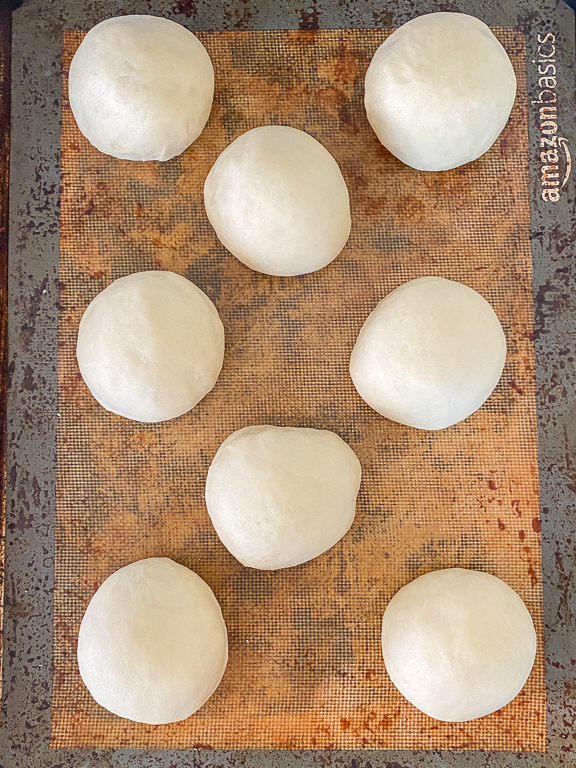 For the entree, we were inspired by the recipe from dinnerthendessert.com. Theresa is cutting up the red onions. 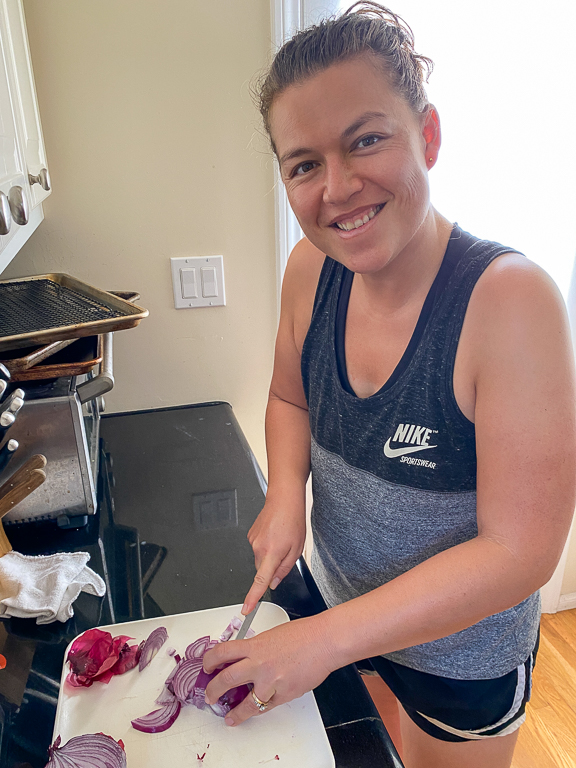 We used chicken thighs because they're very juicy and flavorful. I sauteed the onions and the chicken, making sure to give it a nice seer. 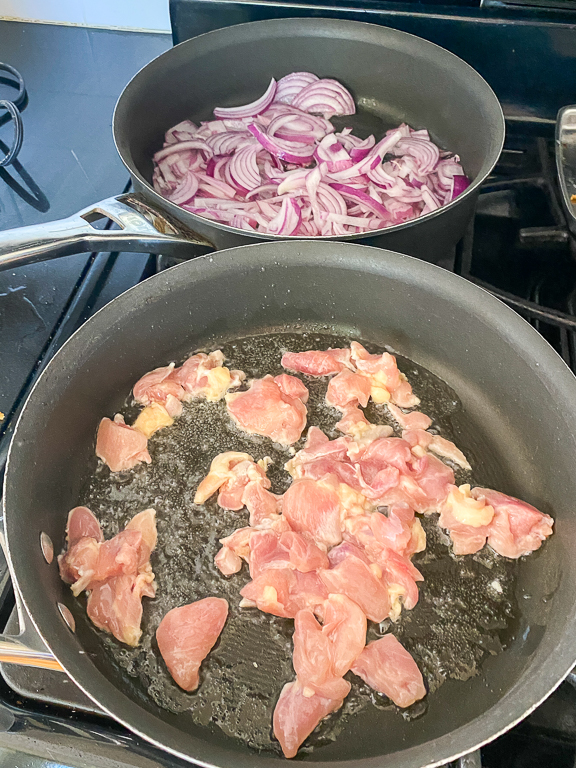 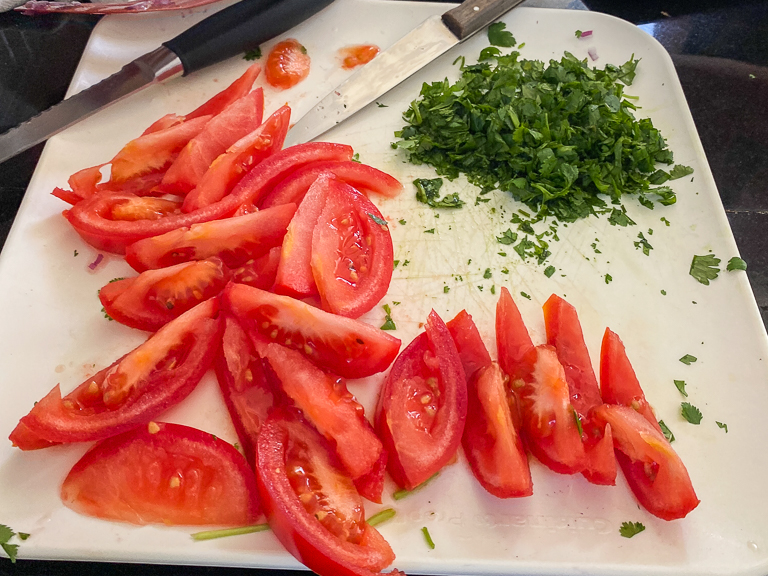 And then they went into the mix, along with soy sauce, red wine vinegar, and cumin. 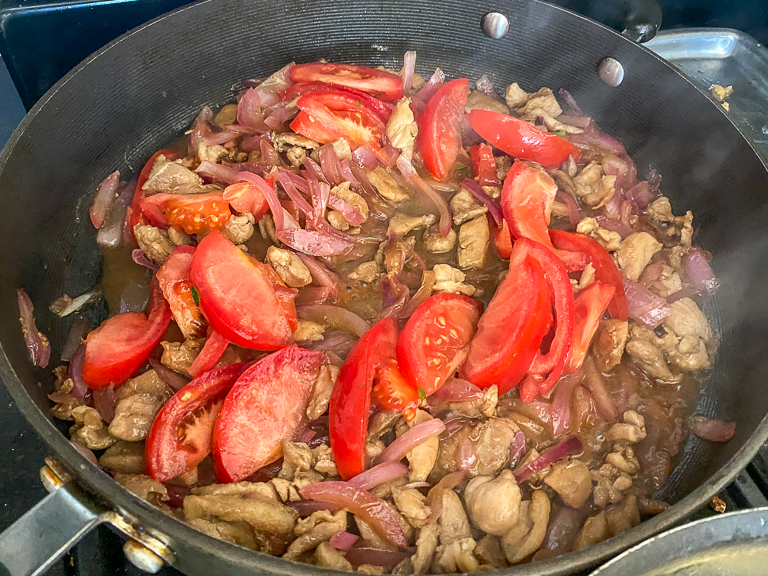 I deep fried a few French Fries to add at the very end. 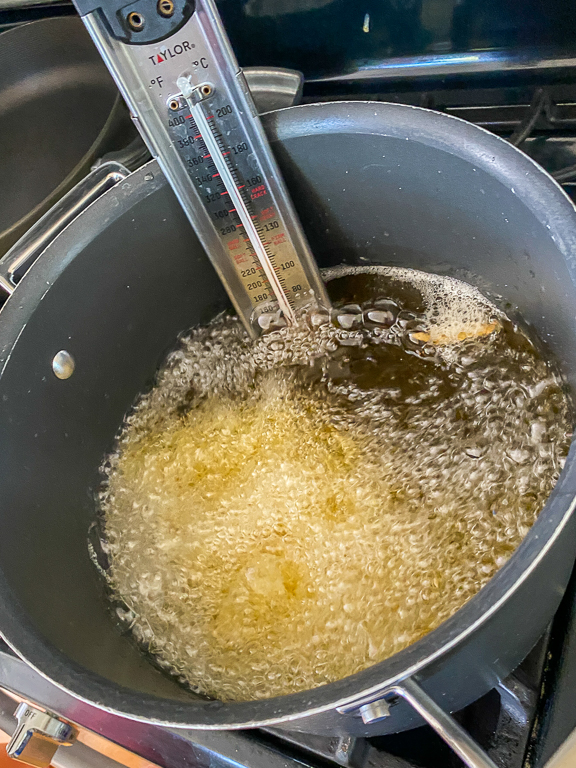 For our dessert, we'll be having fried plantains. The best ones are the ripest. There's not really a recipe, but Theresa followed the information from laylita.com. 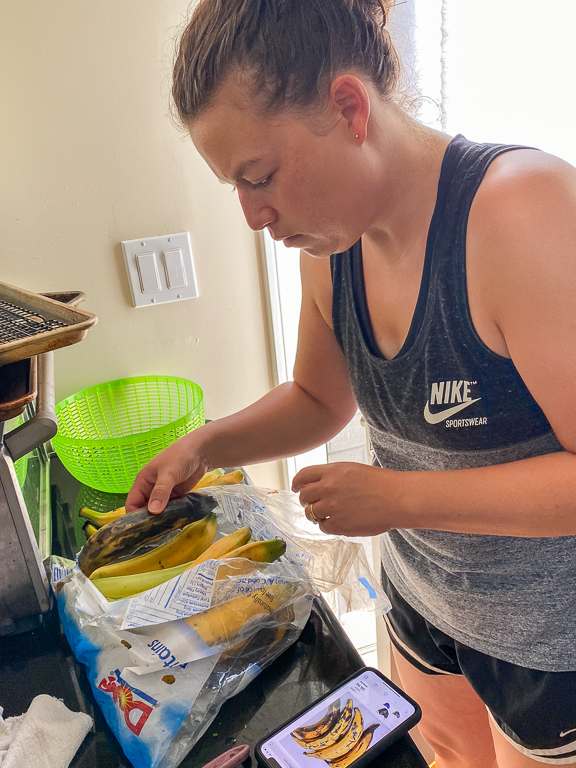 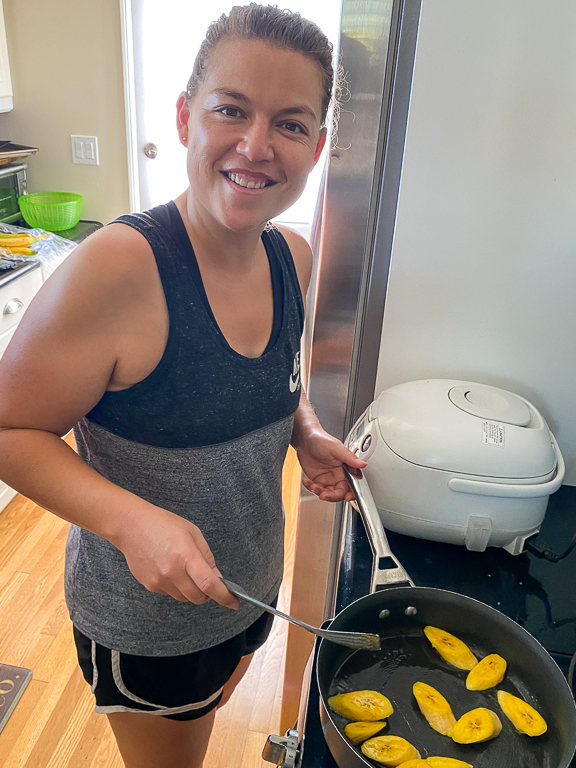 Theresa that looks like a beautiful meal! I'm excited! 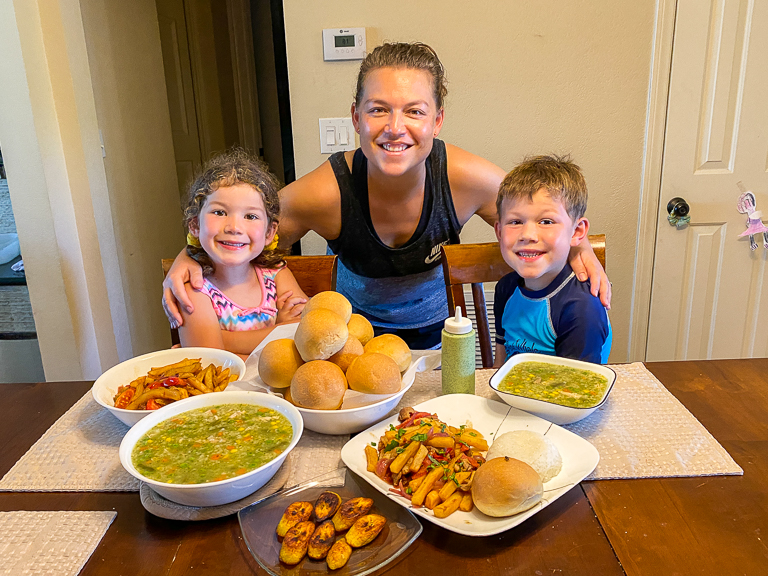 Here's that graphic from above again, but with our foods that we made!
My rolls turned out beautifully! Fluffy and golden brown, just like theirs.
Our soup is a bit less watery than what you normally receive there. Lots more veggies, chicken, and rice in there.
For the Aji sauce, I even found a squeeze bottle to look just like theirs.
Our Saltado de Pollo looks great! It's topped with cilantro of course. The rice that comes with it looks like it came out of a bowl that was inverted, so that's what we did here too.
And the fried plantains were really tasty too! 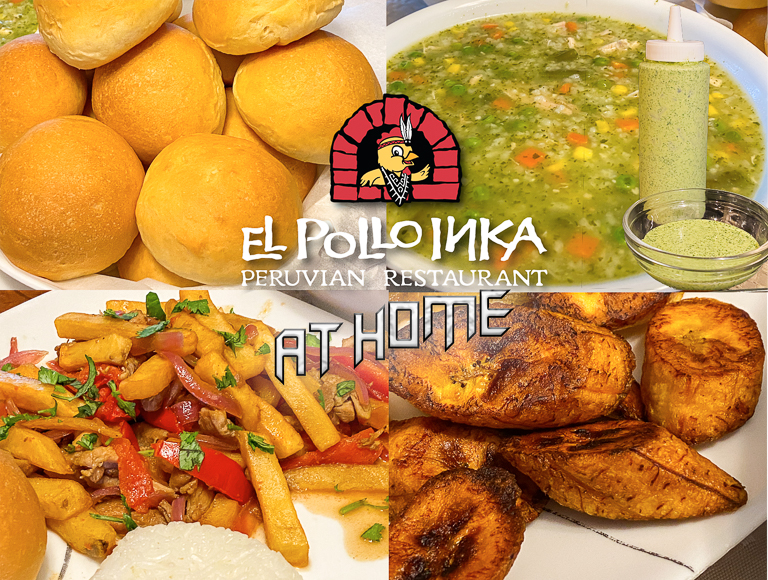 The chicken, soup, and even bites of the roll get covered in Aji sauce. 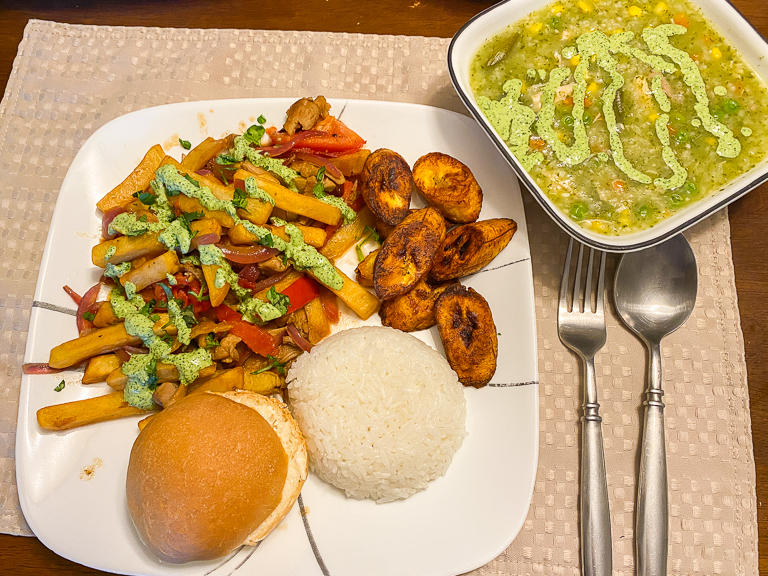 Tonight's meal was something quite a bit different than what we're used to making. But everyone was excited to be having it. 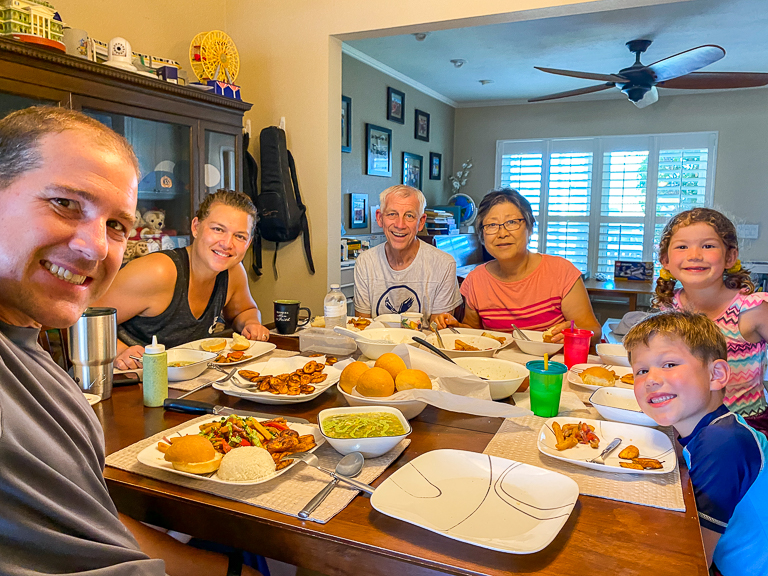 Alli went back for more soup 3 times!
Ian saw the green sauce and asked to try it, even knowing that it was spicy. After tasting it with his soup he said -
Ian - I don't like the sauce. Not because it's spicy, but because it overpowers the flavor of the soup.
Uh, okay. You must have heard mommy talk like that some other time. 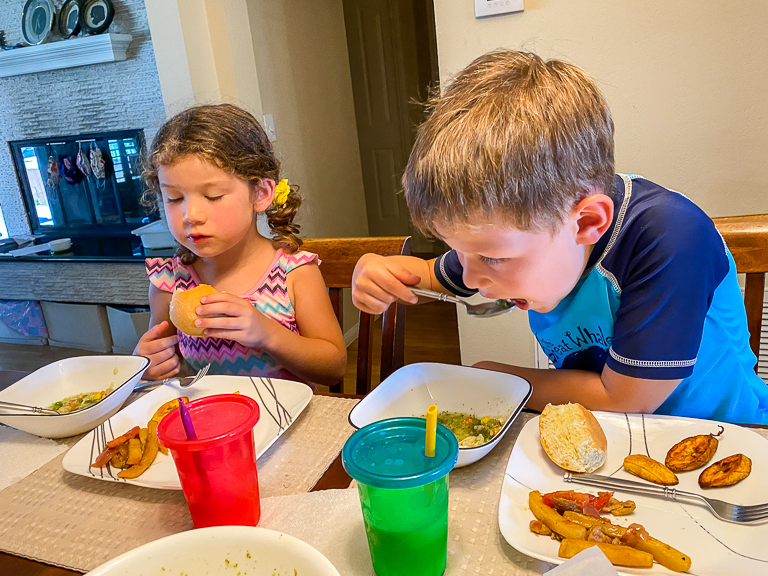 Chi and Richard both enjoyed it. Richard put that Aji sauce on lots of things too.
Great job Theresa! Tonight's dinner was tasty! 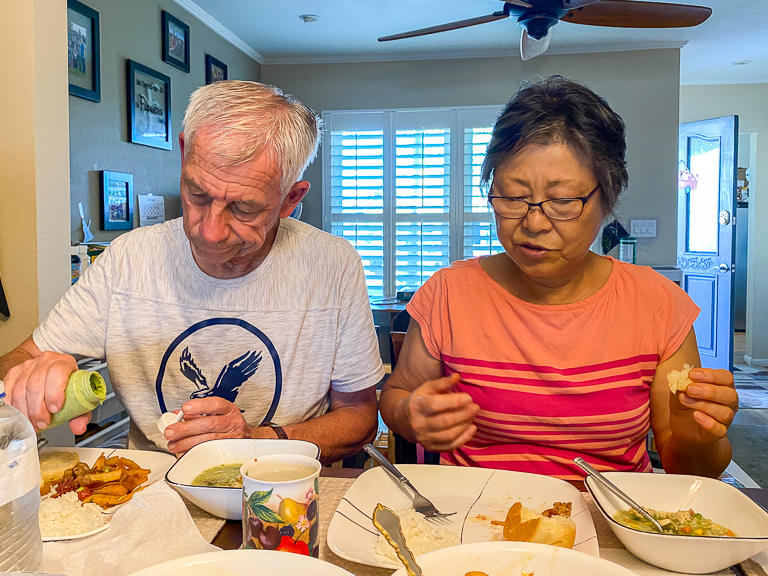