Tonight we're making Chipotle at Home! There's a whole bunch of stuff that we've got to make if we're going to have a burrito assembly line, just like the real Chipotle. 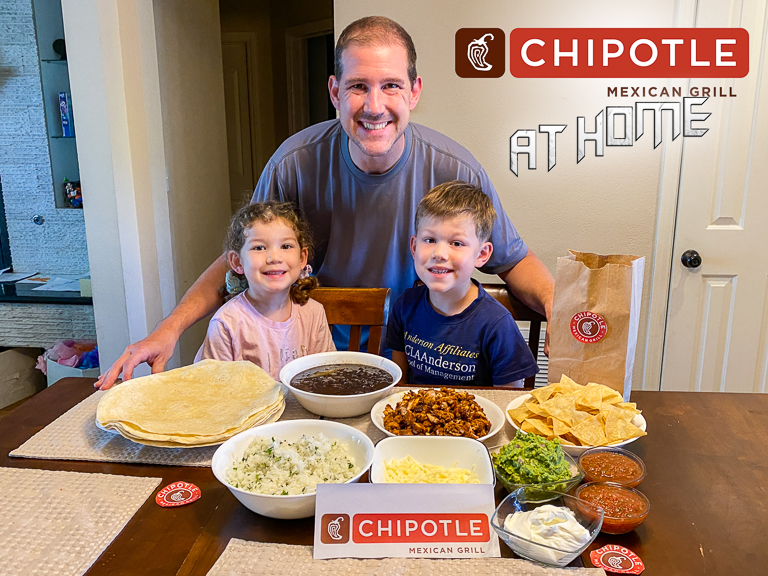 There's a few different meat choices available, but my go-to is always the Chicken. Theresa found a recipe for a Chipotle Chicken Copycat from culinaryhill.com. We'll be making a marinade to go on our chicken thighs.
To start, we're going to need Ancho Chile. We found these dried Ancho chiles in the Mexican spice section of our Walmart. 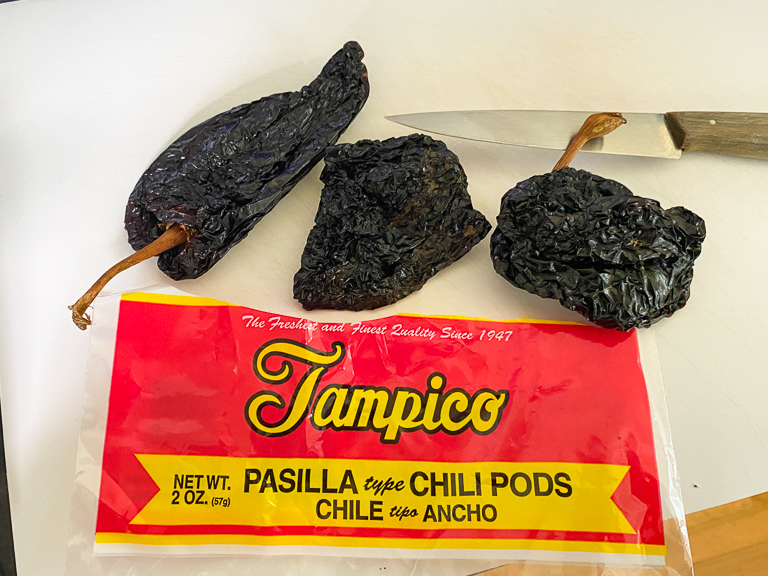 Before I can use them in our marinade, I cut out the stems and removed all the seeds. They were toasted in a pan for a few minutes then I put them in 4 cups of water and boiled them in the microwave for 6 minutes. 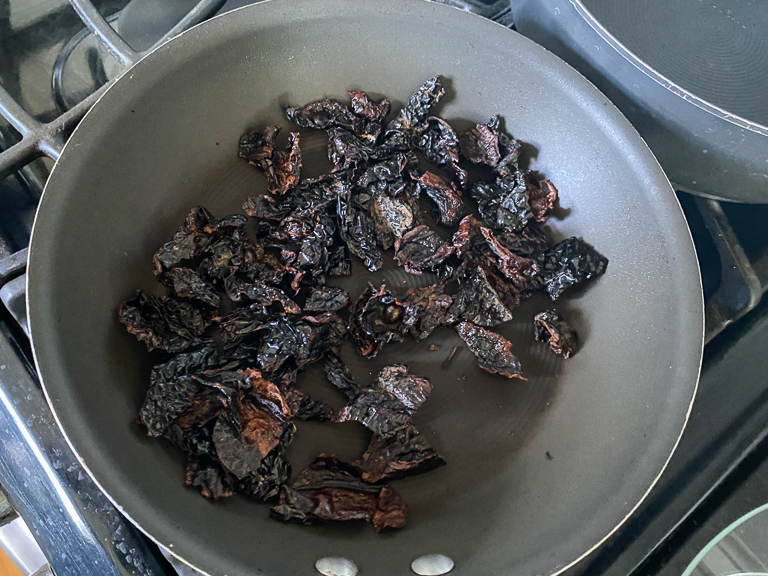 After that I added the hydrated chiles, garlic, onion, adobo sauce, olive oil, cumin, oregano, salt, and pepper in the food processor. I blended everything until it turned into a paste. 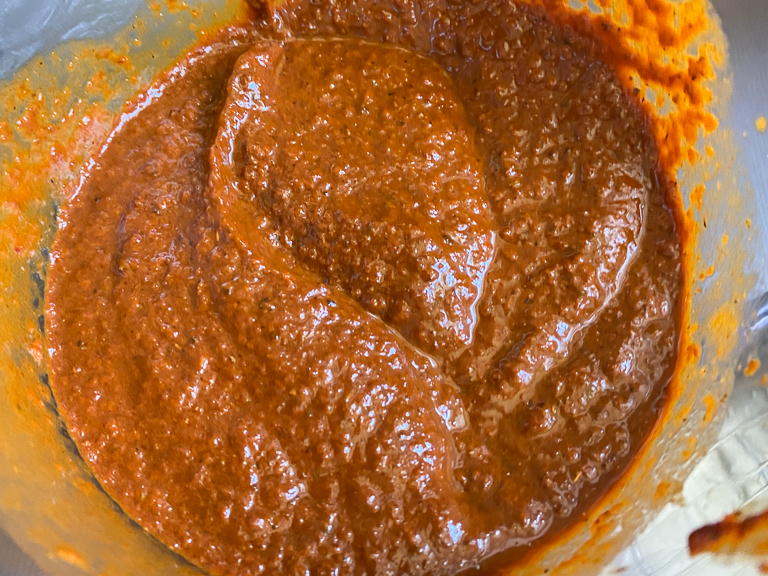 I then marinaded my chicken thighs in them for 6 hours. Just before dinner, I grilled them. 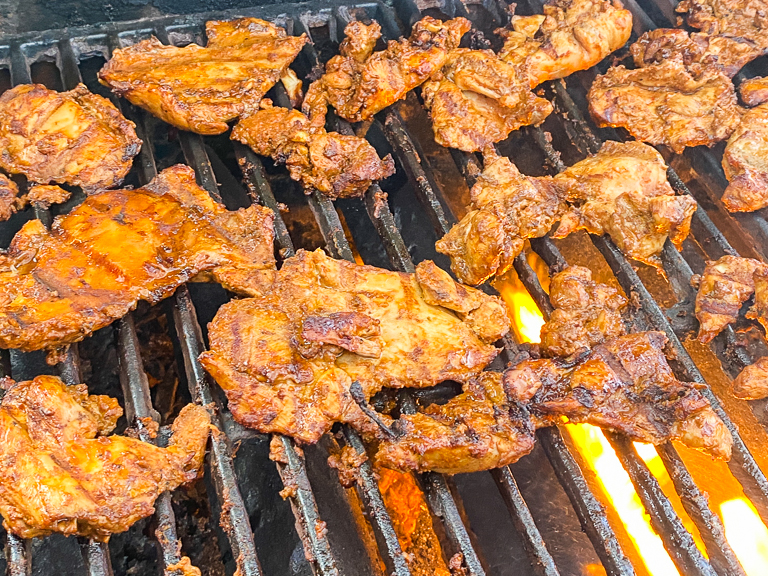 After donning a silicone glove, I did a rough chop of the chicken, just like Chipotle would. Perfect! 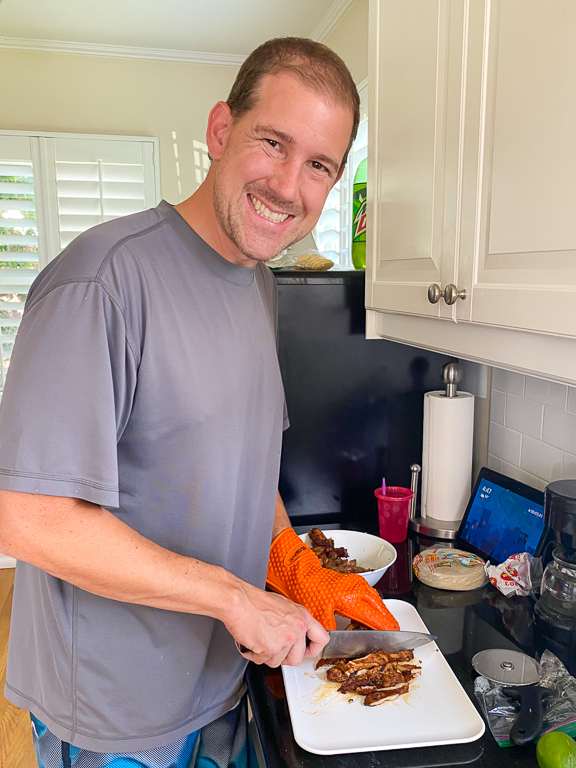 Theresa has kept busy too. She is making our salsas. First a mild salsa and then a hot salsa. 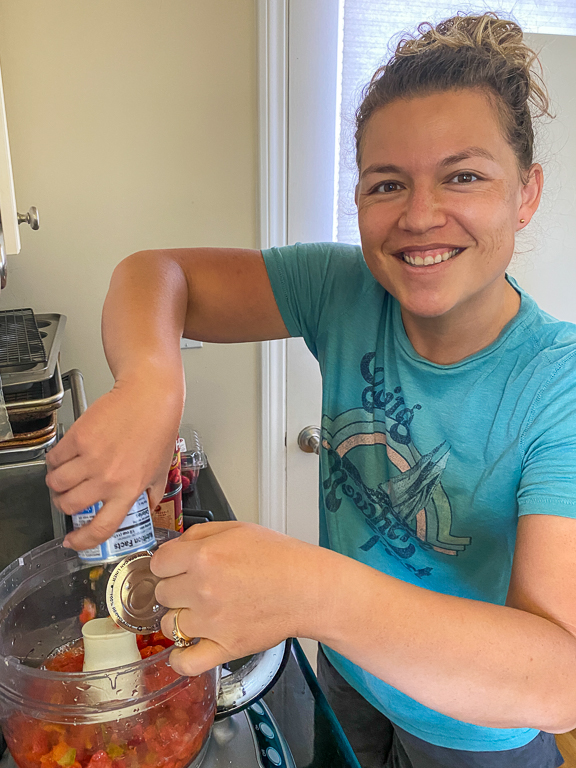 And we can't forget the beans that go on the burrito. We're fans of the black beans, so she found a recipe from MenuOfMusings.com. After adding 2 cans of black beans, garlic, cumin, oregano, onion, oil, salt and pepper, and a bay leaf, it simmered on the stove for 30 minutes. 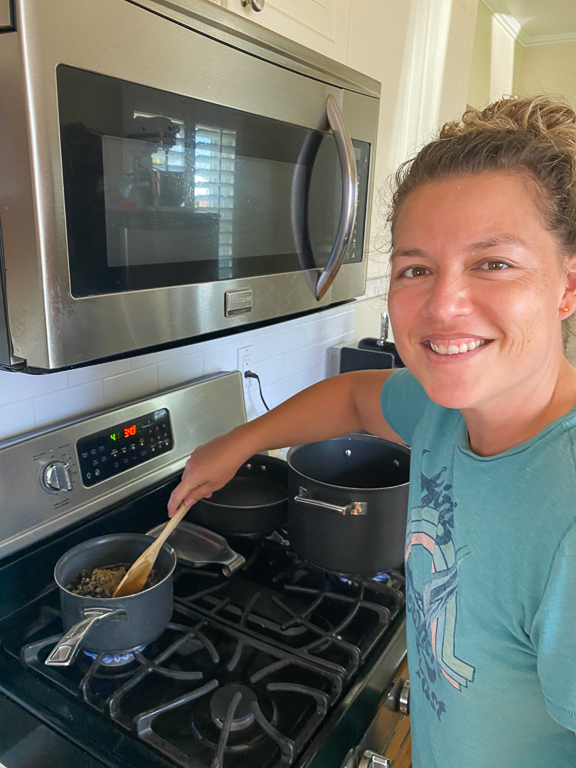 I love the taste of Chipotle's guacamole. It's a shame they give you such a tiny cup of it when you've got such a big bag of chips. I wasn't going to have to ration my guacamole tonight. The recipe calls for 2 avocados, I'm making a triple batch! 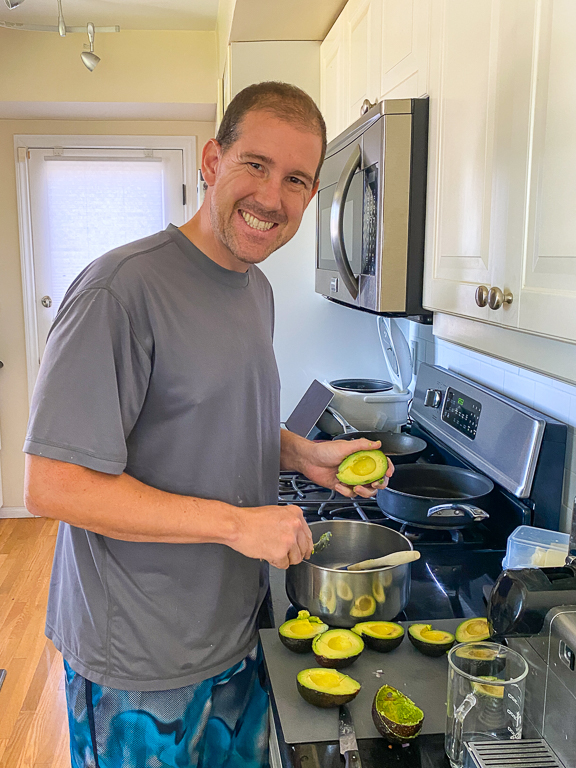 Again we used a recipe from culinaryhill.com, this time for Chipotle Guacamole Copycat. After mashing the avocados with salt and lime juice, I stirred in red onion, cilantro, and jalapeños with the seeds removed. That went into the fridge, tightly covered with plastic wrap for a couple hours while the rest of the meal comes together. 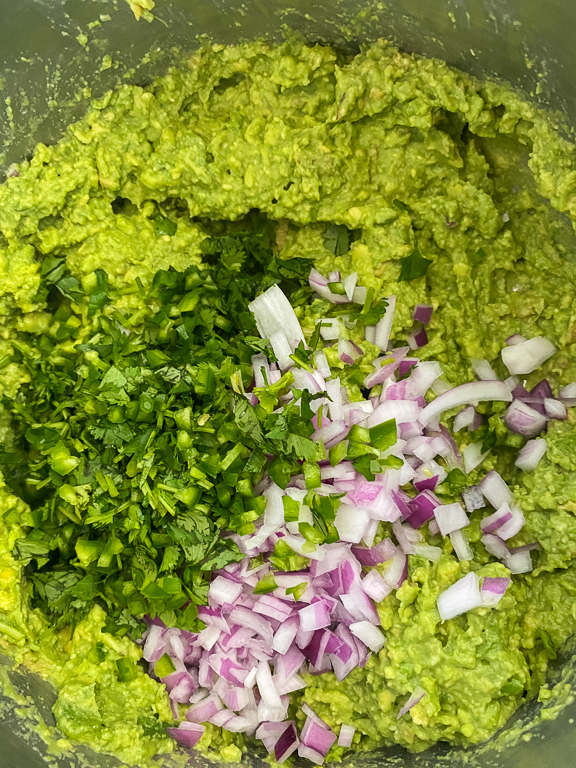 Just before it was time to eat, I need to make the chips. Yes, make the chips. These aren't coming out of a bag tonight. This recipe comes from dinnerthedessert.com for Chipotle Lime Chips.
Using white corn tortillas, I brushed the tops with lime juice and then left them out for a few minutes to absorb it and dry. 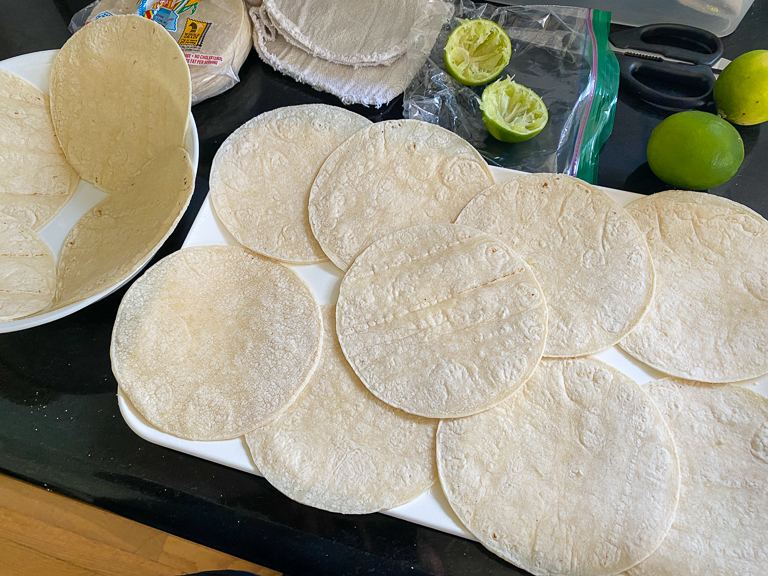 I used a pizza cutter to slice the tortillas into sixths. 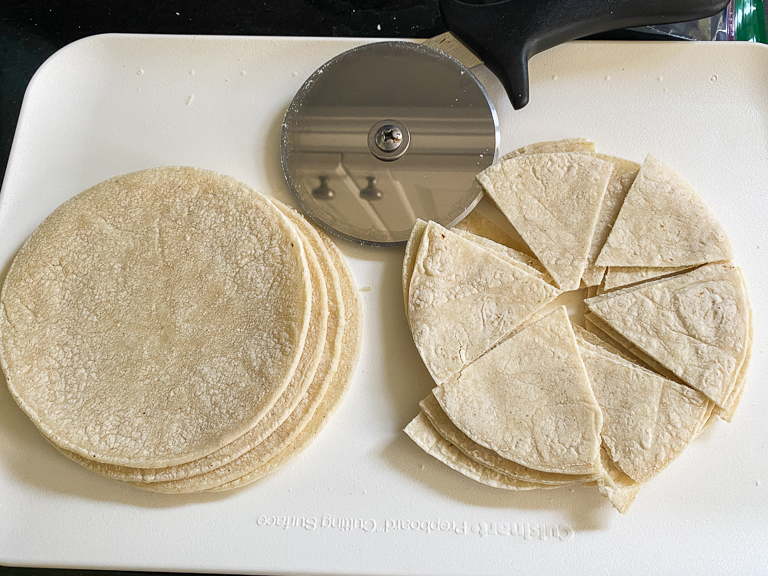 Then it was over to the hot oil for 35-45 seconds. As soon as they came out, I sprinkled kosher salt onto them. 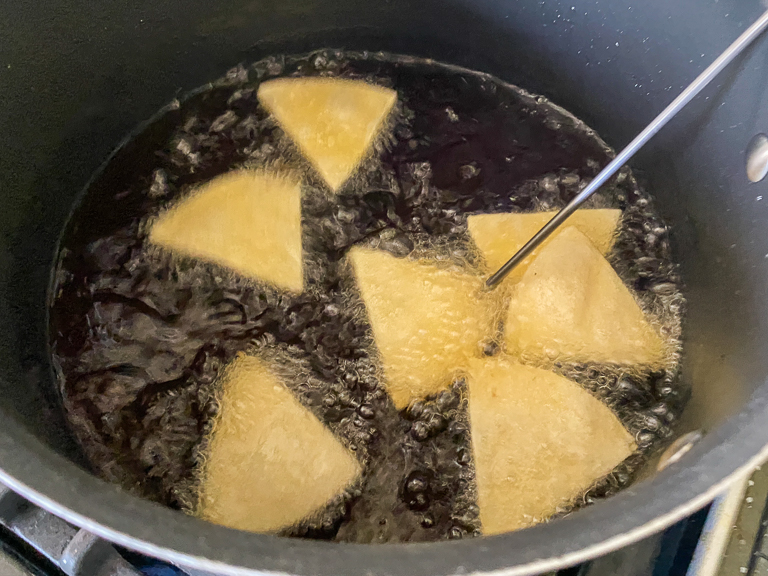 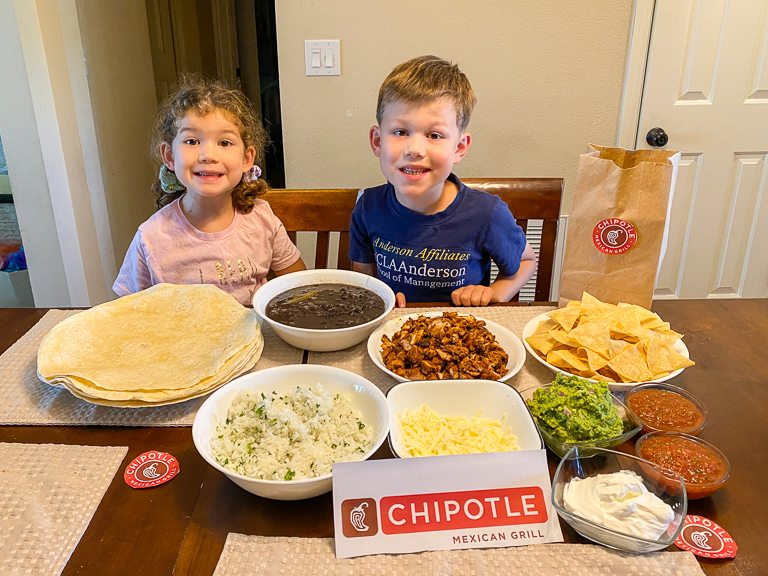 The chicken turned out fantastic. It's not a flavor we typically make at home, so it was a nice change-up. 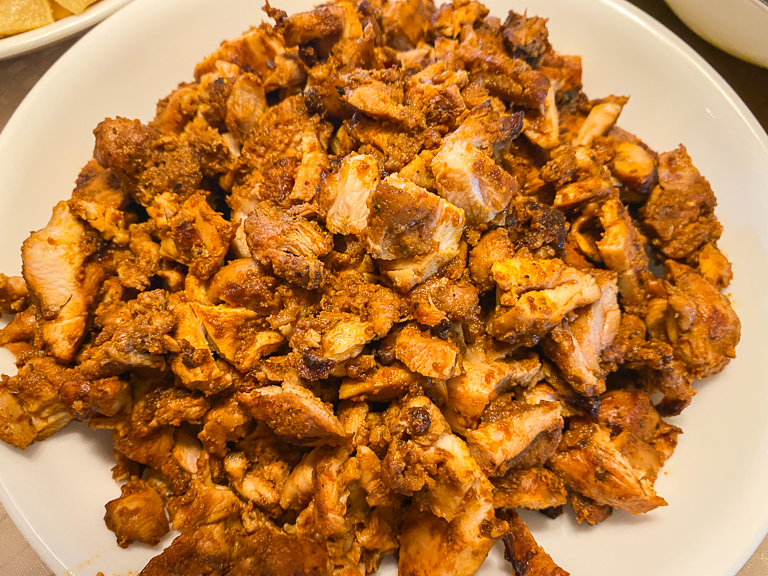 Can't forget about those black beans. And that bay leaf is just hanging out. I was tempted to put it inside someone's burrito, just like Chipotle sometimes will do. Apparently some people don't realize there's a bay leaf in the beans, and many people post upset tweets complaining about finding leaves in their food. 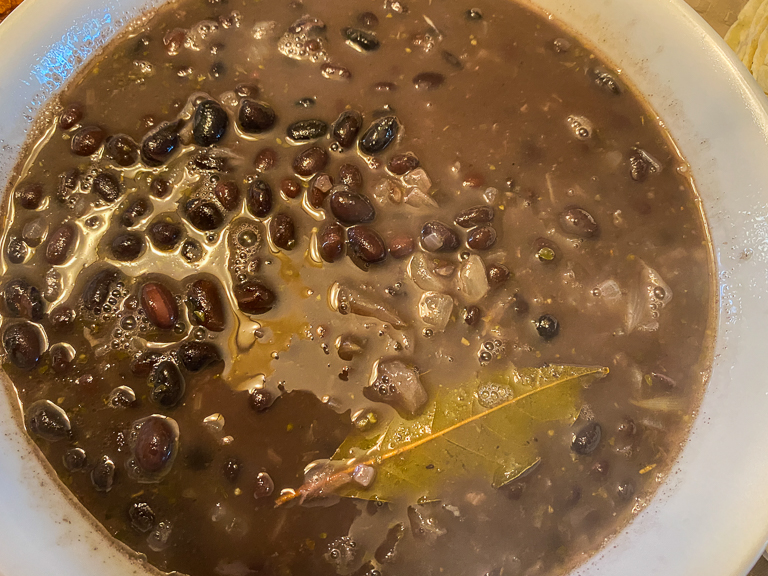 There's one more thing we have to have. It's Chipotle's tasty rice. Culinaryhill.com has a Chipotle Cilantro Lime Copycat recipe. Theresa added the rice, olive oil, salt, and a bay leaf to the rice cooker and set it for white rice like normal. When it was done, she mixed in fresh squeezed lime juice, cilantro, and a little more salt. 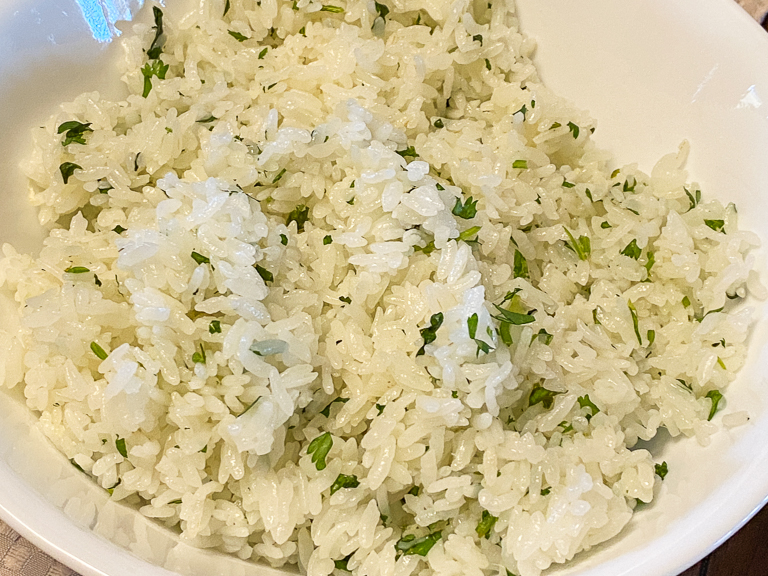 Those chips turned out just like Chipotle's! A little thick, crunchy, with a taste of lime and salt. 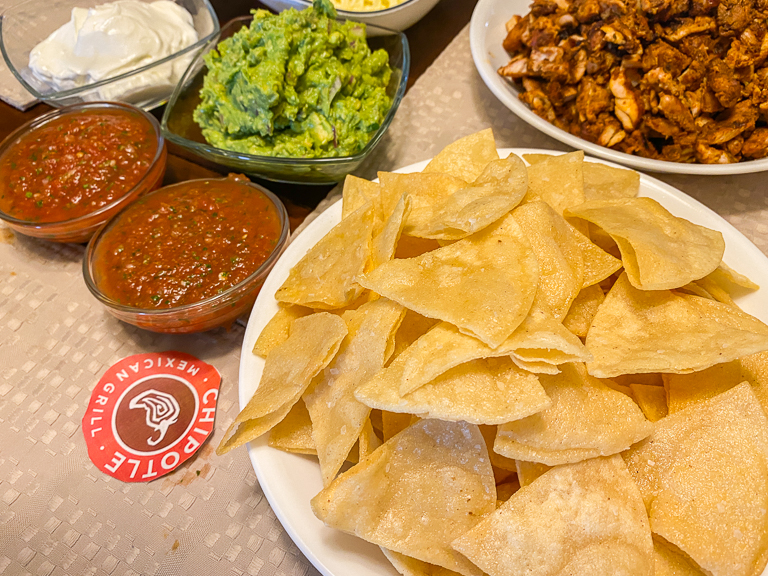 My order is always - Chicken burrito, black beans, white rice, hot salsa, cheese and sour cream. I'm never the one holding up the line trying to figure out what I want.
And since I'm the one assembling it, I can add as many spoonfuls of meat as I want and not worry about an up-charge for double meat. 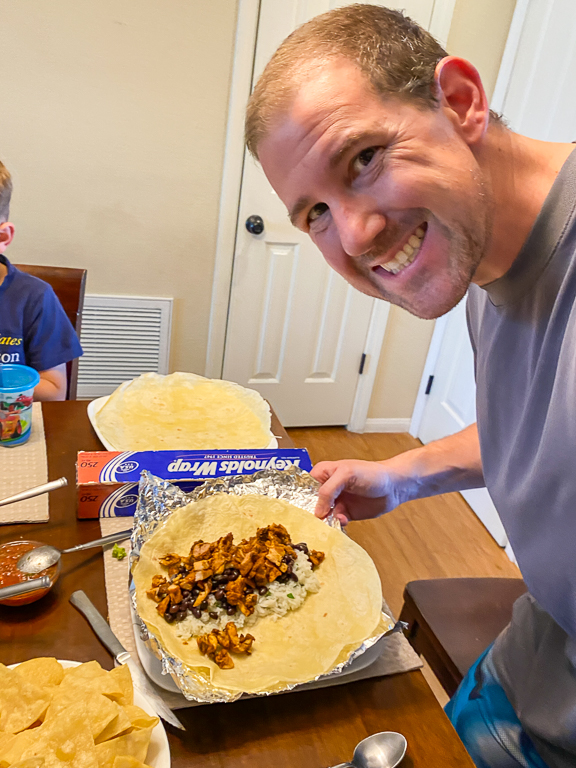 And speaking of up-charges, I never get guac on my burrito. But since I made so much of it, I can have it with everything!
Even though we got the extra-large tortillas, mine was still at risk of not closing. That's how you know you did it right and got your money's worth when you're at Chipotle. 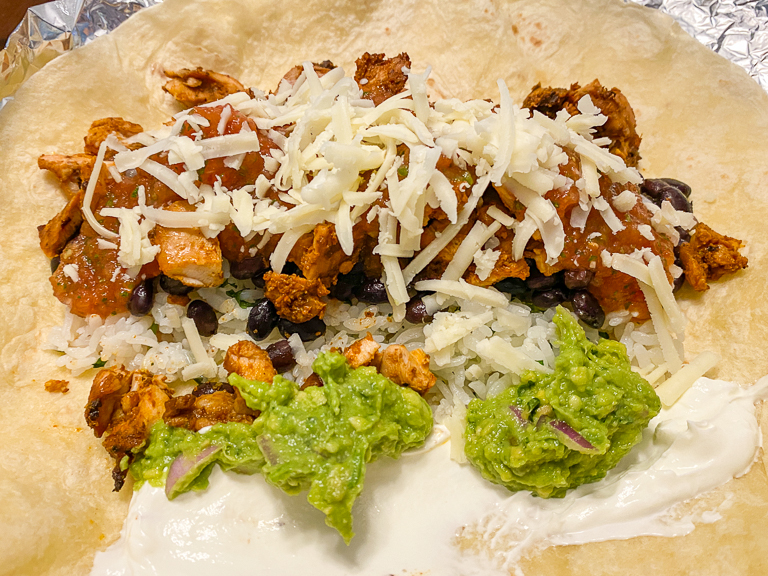 It's got to be wrapped in foil to count I think. Pair the burrito with chips and guac and you've got a delicious meal! 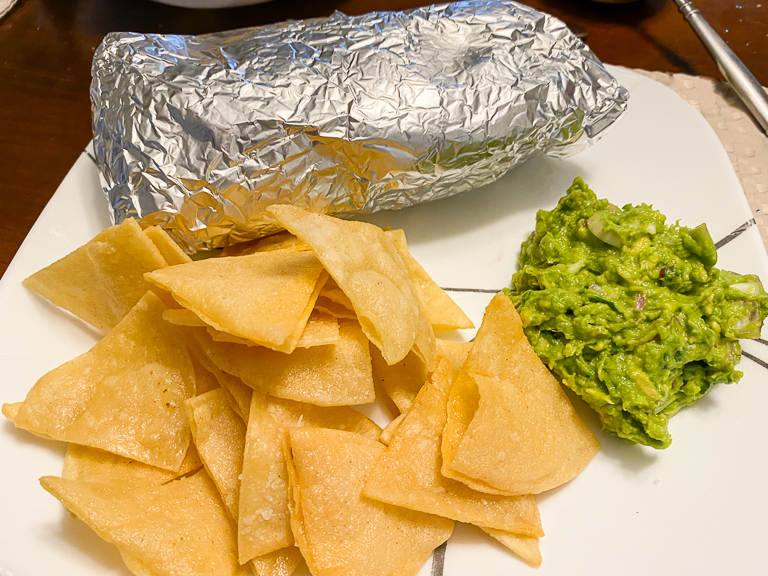 Yum! This burrito tastes so much like the real thing! 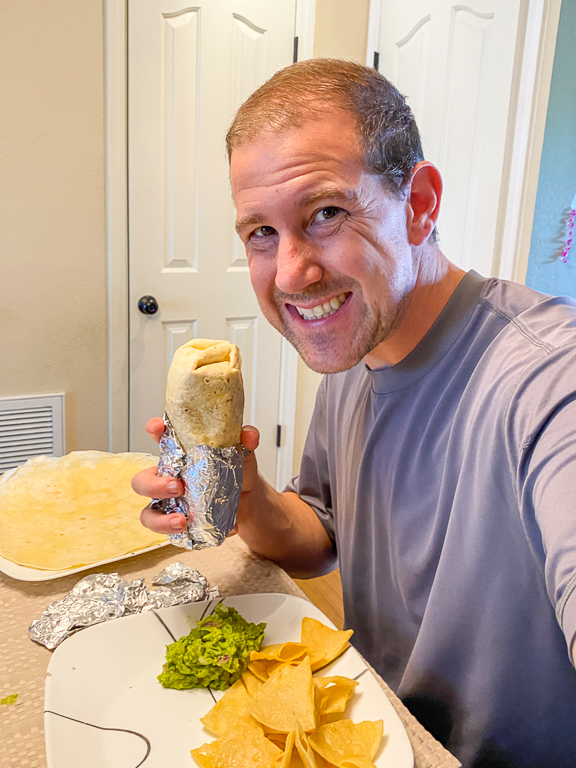 Both the kids enjoyed the meal too. Their favorite part of it was the tasty rice. Both wanted seconds on the rice all by itself. 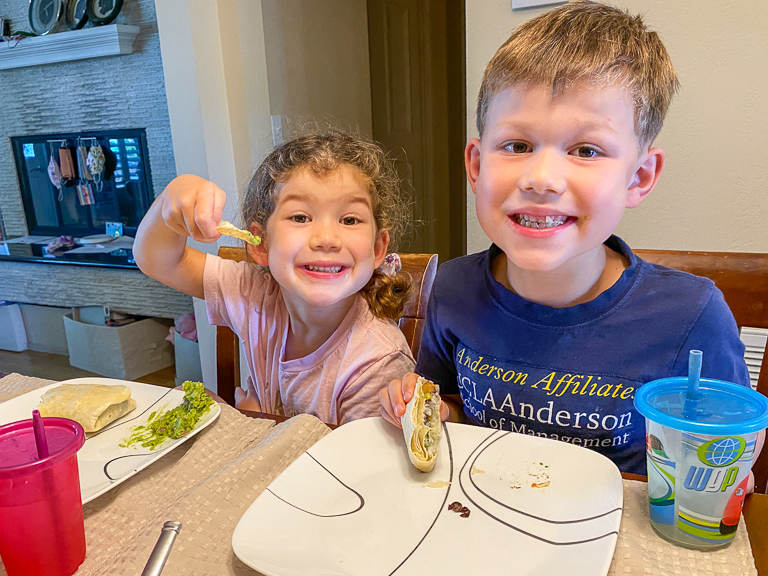 Richard and Chi said that they are getting to "eat out" at so many more restaurants now that we're doing all this cooking at home. Theresa's favorite new summer drink has become those Mint Juleps we made a few weeks ago. That sounded like it would be pretty tasty with our meal. I'm going to call Chipotle at Home a success! So much tasty food! 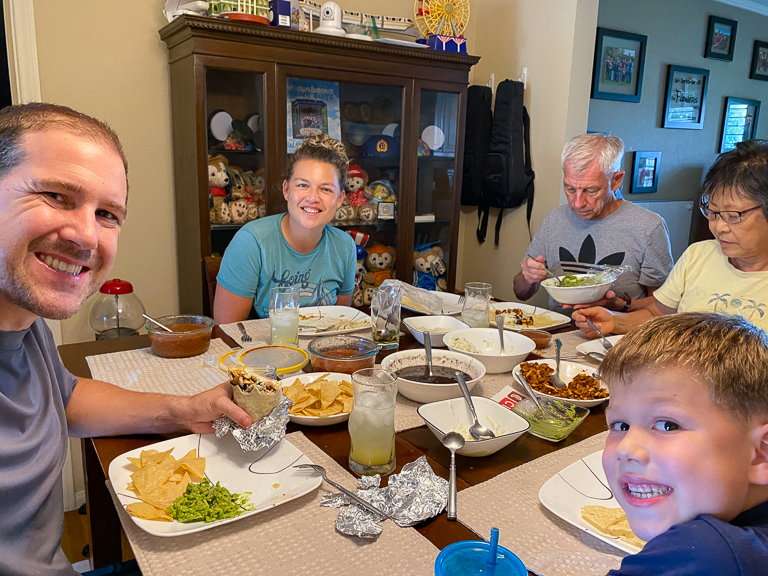