Pizza at Home - Pizza Margherita plus making my own mozzarella cheese

Tonight we're continuing our Make at Home Pizza Series.
There's so many different varieties of pizza (Wikipedia mentions 41!). But I thought that if we're doing a series on Pizza, one of them better be the pizza that all the others are based on.

Whether the stories are true or not doesn't really matter so much to me. What I've always heard growing up is that a Neapolitan Pizza Maker made the Pizza Margherita to honor the Queen Consort of Italy, Margherita of Savoy. He used red tomatoes, white mozzarella, and green basil leaves to represent the colors of the Italian flag. And so tonight, with that in mind, we're making Pizza Margherita.

The idea behind tonight's meal is simplicity. A simple dough, simple sauce, simple toppings. We'll see how simple all that really turns out to be.
I used a recipe from foodandwine.com for Perfect Pizza Margherita.  Yeast, water, sugar, salt, and flour went into the bowl. The recipe said to knead it until a silky but soft dough forms. My dough was very soft. Even after kneading, it was less dough like and more liquid like. I'm curious to see how this is going to turn out. 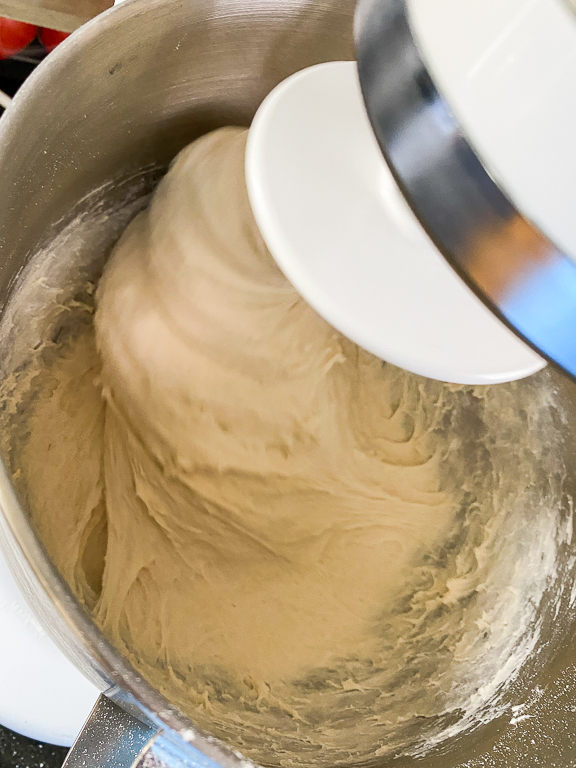 Because these flavors will be better if they mature, I didn't just put the dough on the counter to rise. I put it in the fridge for 2 days to slowly rise. 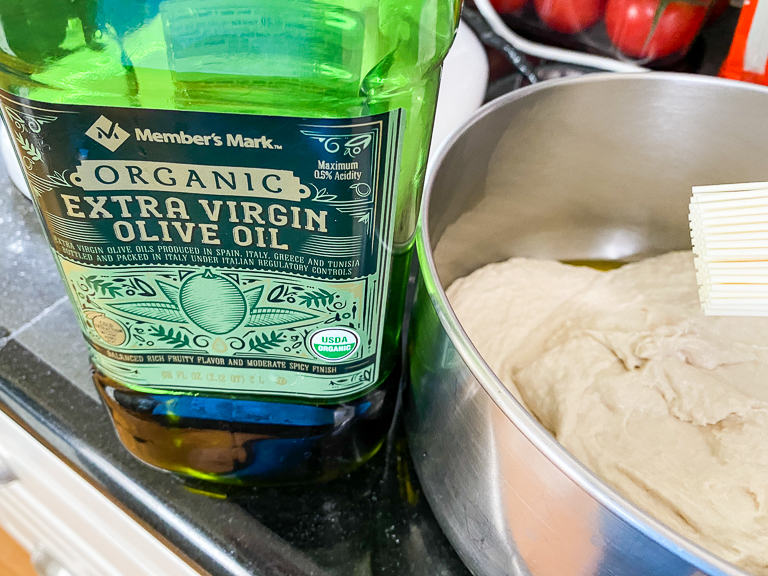 For the mozzarella, I wanted to do something I've never done before. Make my own cheese. I knew it could be done, and it looked like one of the easier cheeses to make. I researched a little bit of what I needed and the ingredients were pretty simple. Milk, citric acid and rennet. Milk is always in the house. We use citric acid in the dishwasher to help with the hard water, so we already had that too. Just the rennet I had to find. 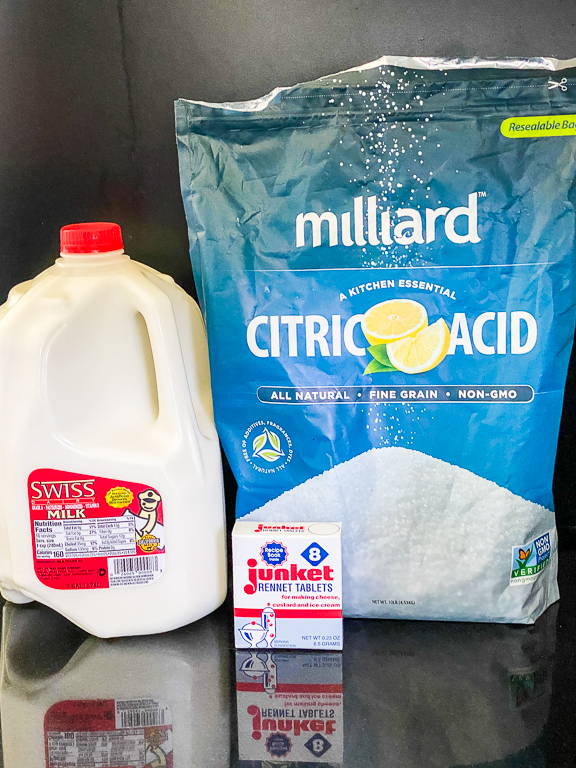 While liquid rennet is what lots of people say to use, these junket rennet tablets were more easily accessible. Actually I read a few times that people specifically said to avoid the junket rennet solid tabs, but this is just a 1-time thing so we're going to roll the dice. Plus these cost $1.79 while the liquid stuff is $10 shipped. 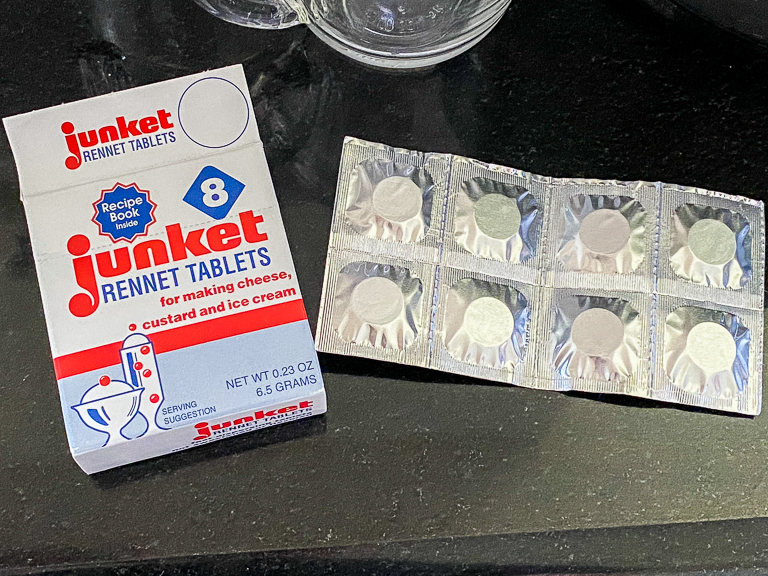 I learned that cheese is a game of pH and temperature. I had my thermometer ready to go and my heat on low. The entire gallon of milk went into the pot. 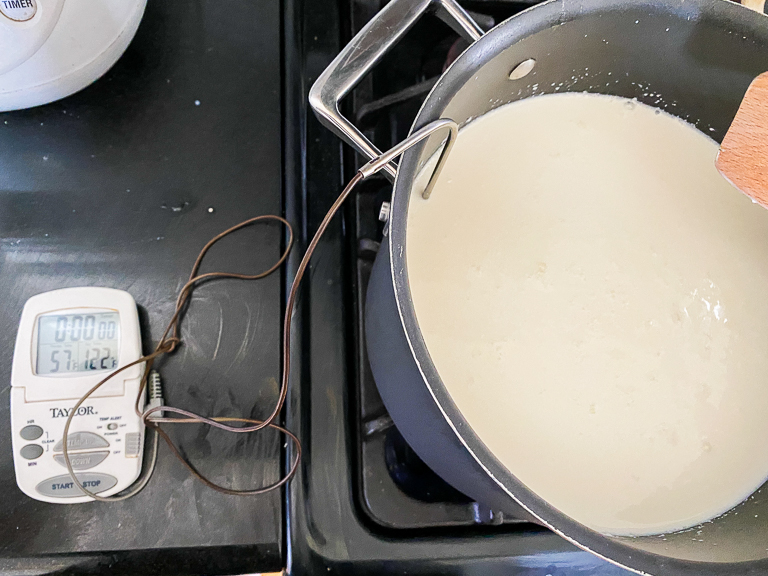 I was excited to try something new! 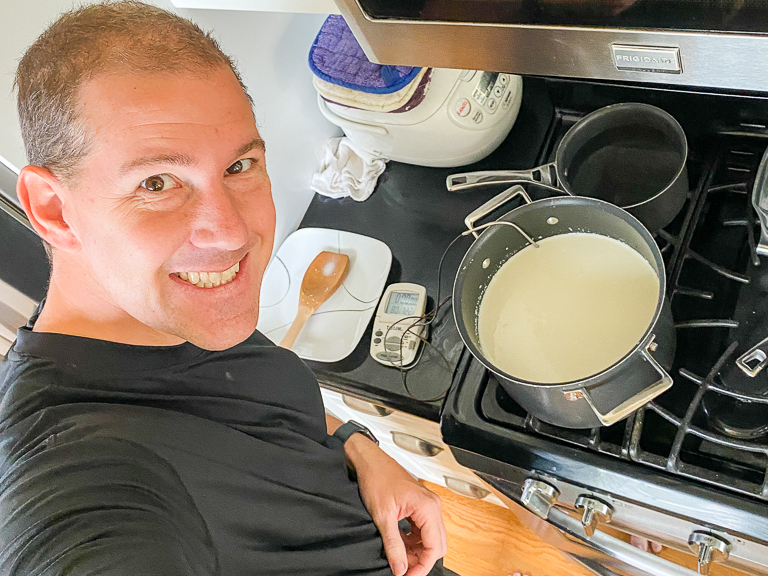 I had read a few sites about how to do it, and decided to start by following the guidance from cheesemaking.com for 30 Minute Mozzarella. I added the citric acid and was encouraged to see the curdling start. 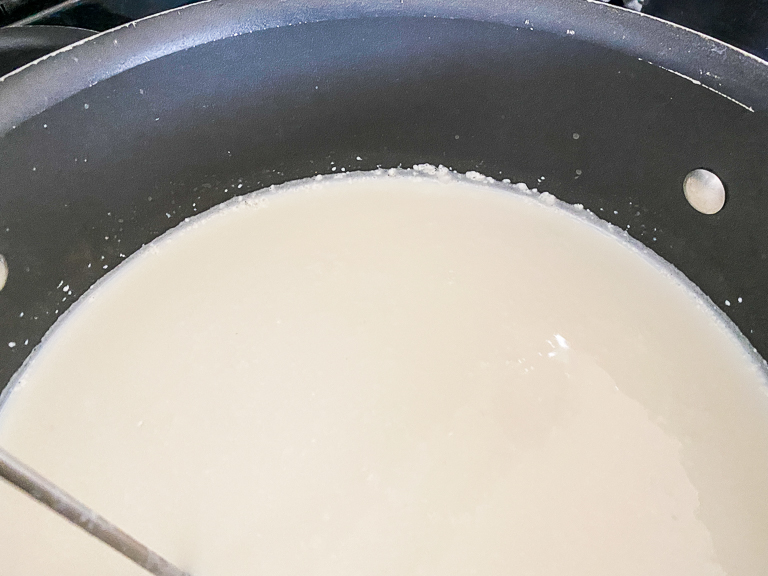 According to the site, once it got to 90F it was supposed to be curdled. Mine was not at all. It didn't changed from the picture above. I had read on another site to use more citric acid and upon adding that to the milk it quickly curdled.
The next step was to add the rennet and remove it from the heat. After 5 minutes it's supposed to form a gelatin like substance on top as the curds separate from the whey. I didn't get that either. So far this cheese making black magic is eluding me. I had read that the junket rennet tablet potency is sometimes in question, so instead of the 1/4 junket tab that was recommended, I used the remaining 3/4 and then waited another 2 hours for it to come together. It did nothing of the sort. It remained in this curdled state every time I looked at it. 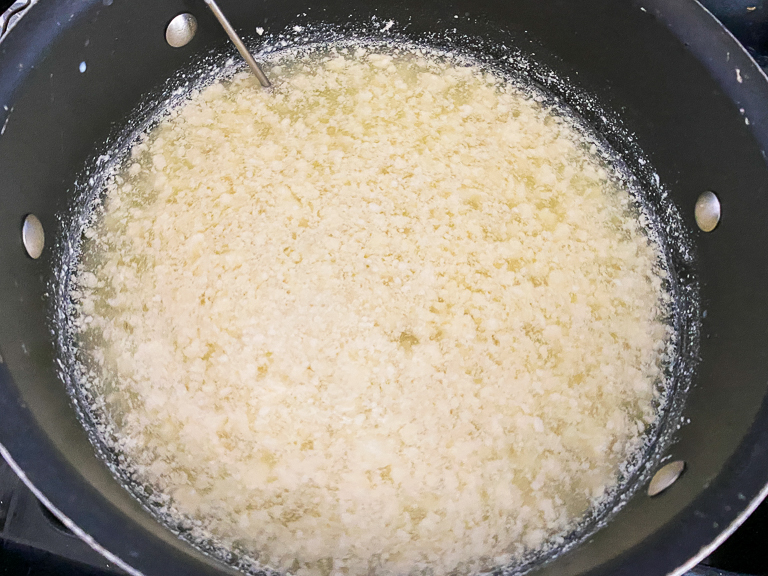 Well it appears I made cottage cheese. I strained it anyway, separating the curds from the whey with a slotted spoon. 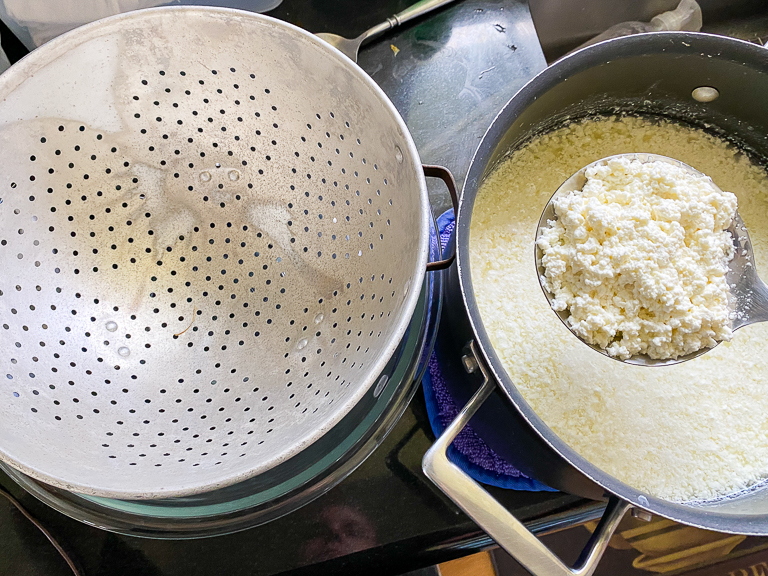 There's a couple ways to go about making the mozzarella cheese. One is taking the drained curd and adding hot water to it. Doing that melts the curd and you then pull and stretch it.

Eh... It appears I made cheese soup. And not a very good cheese soup either. It was gritty and because I haven't added any salt yet, not flavorful either. Grr.
Well according to one of the kids' books that we like to read them.


Rosie Revere - “Life might have its failures, but this was not it. The only true failure can come if you quit.” 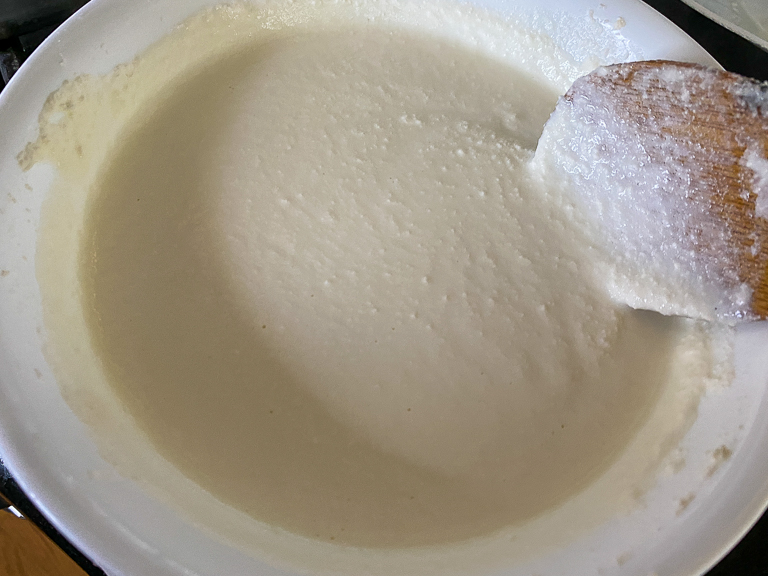 After doing a little more research, reading more about what people did with the junket tablets, and consulting the junket recipe book, I was ready to try again. This time my inspiration was this YouTube video.

On Saturday night after the kids went to bed, I raided the fridge for yet another gallon of milk and tried again.
Once again I minded my temperatures closely. I still didn't see the curdling after adding the citric acid, but instead of monkeying with the recipe, I continued ahead.
I added the rennet but nothing had changed after 5 minutes. I gave it 30 minutes, but still couldn't get my knife to cut slices in it. Things are looking a little thicker on top, but not thick enough. The video started with a 1/2 tablet and then said to add another 1/4 if you thought you needed it. I think I do. I added it and gave it another hour. 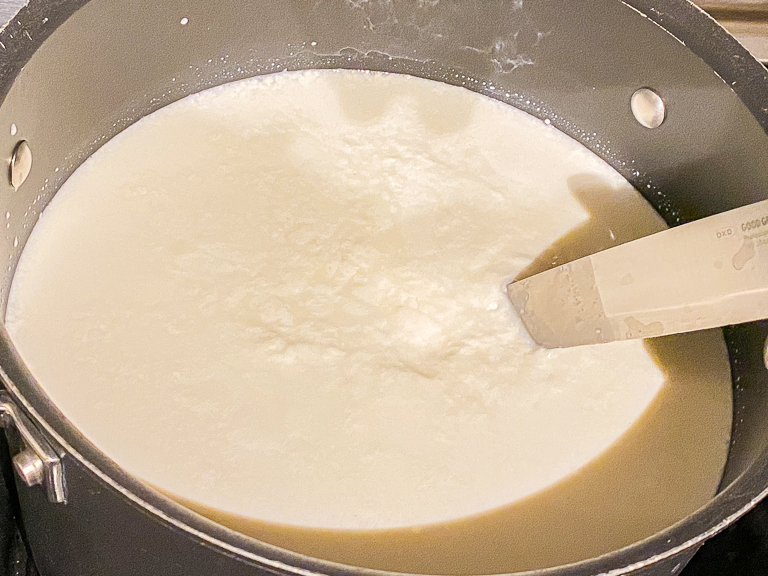 Well I wasn't super encouraged when I came back to it. I'm wondering if I just turned 1 gallon of milk into bad cottage cheese again. 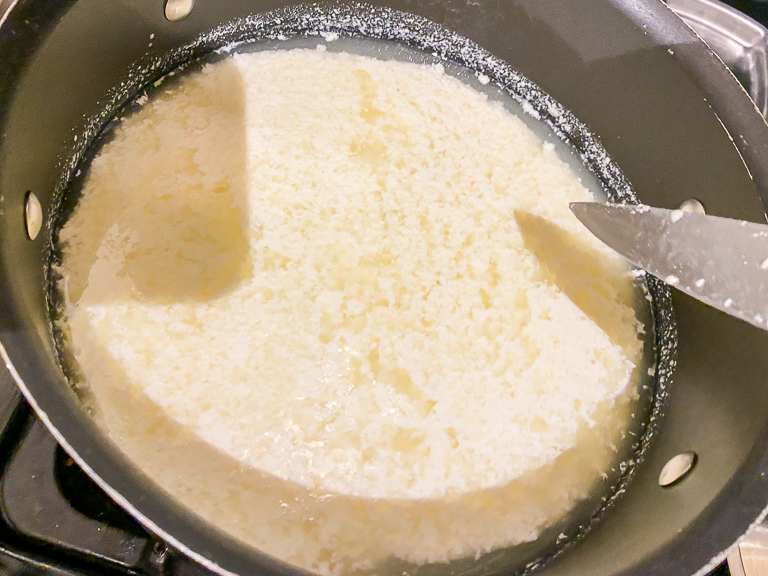 I used a sieve to collect all the itty-bitty bits of curd this time. 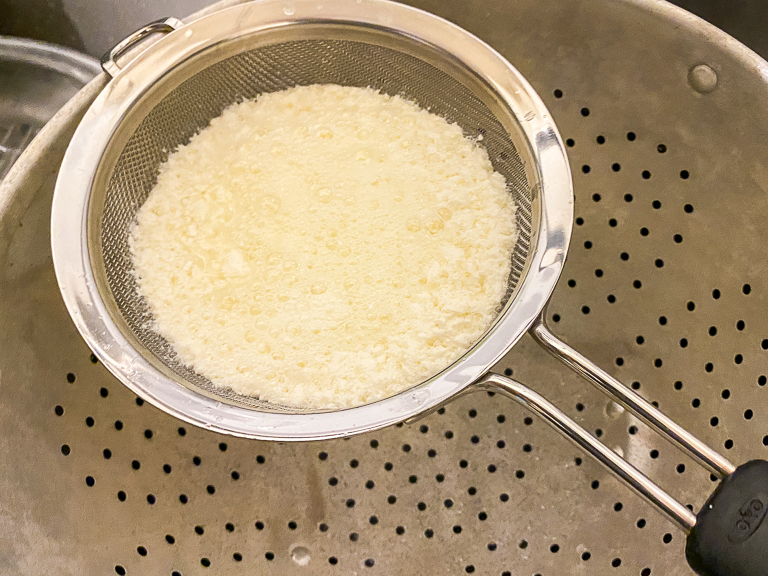 And tossed them into a glass bowl. I drained off as much whey as possible. 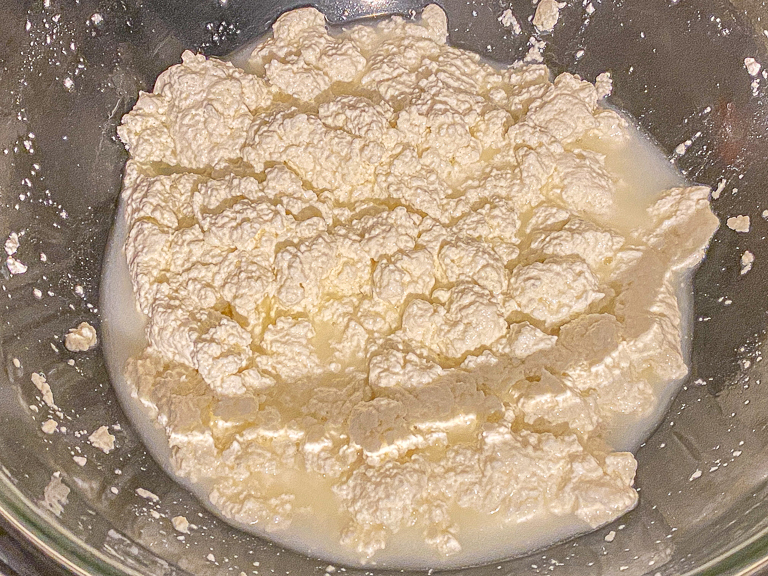 I'm changing up this method too. Instead of the hot water bath, I'm using the second option. The microwave. I donned a pair of gloves for my hands because this is going to get hot. 45 seconds in microwave and then I squeezed and kneaded it together. Drained the whey and then back into the microwave for 30 seconds. Repeat again. One more trip into the microwave and my hands were burning trying to knead this molten mass. But... 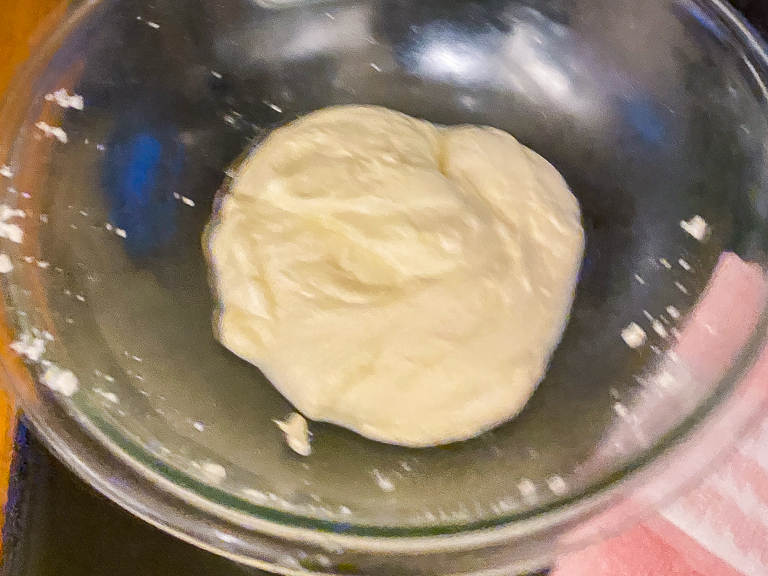 It's mozzarella! It came together into a nice ball too! This makes me happy. Unfortunately will all these extended wait times, it's after 1am, but hooray, it worked! 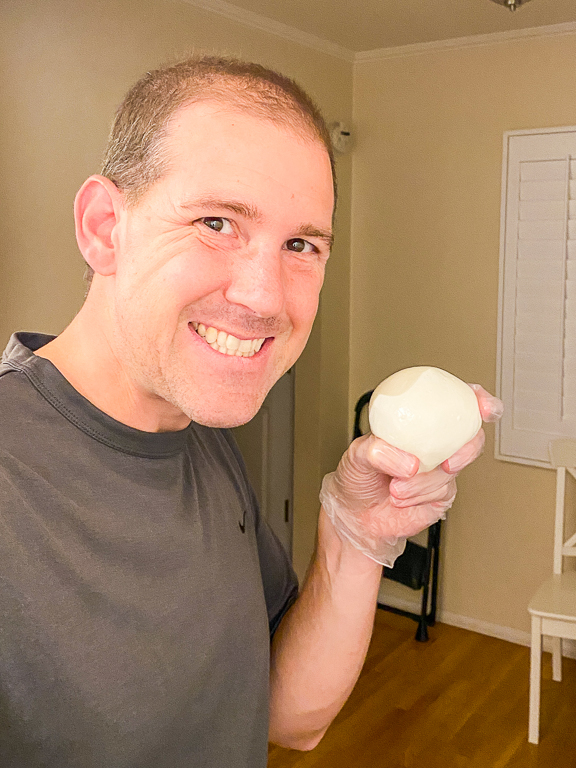 And because I was curious, 1 gallon of milk for me made about 19 ounces of mozzarella. I placed the cheese into an ice bath and went to bed. 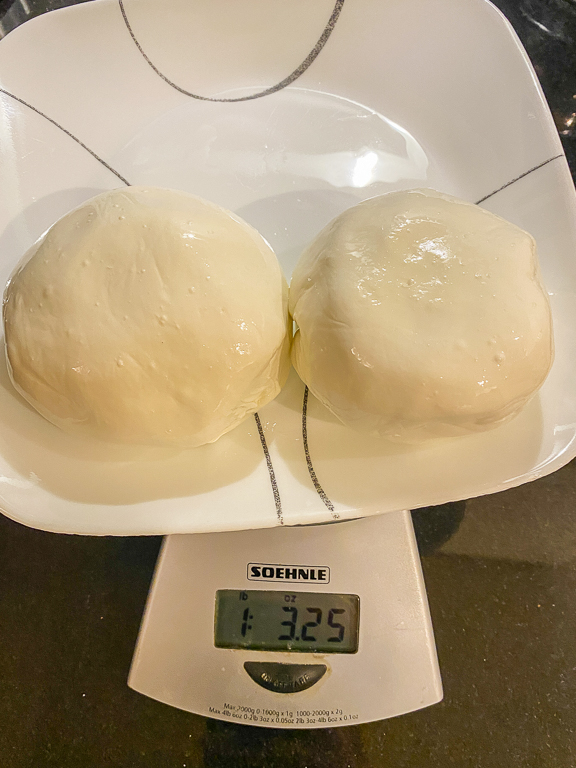 Sunday is here! Time to make the pizza!
Time to get back to "simple". For the pizza sauce, it's tomatoes, oregano, olive oil, salt and pepper. Just run it though the food processor, don't even cook it. 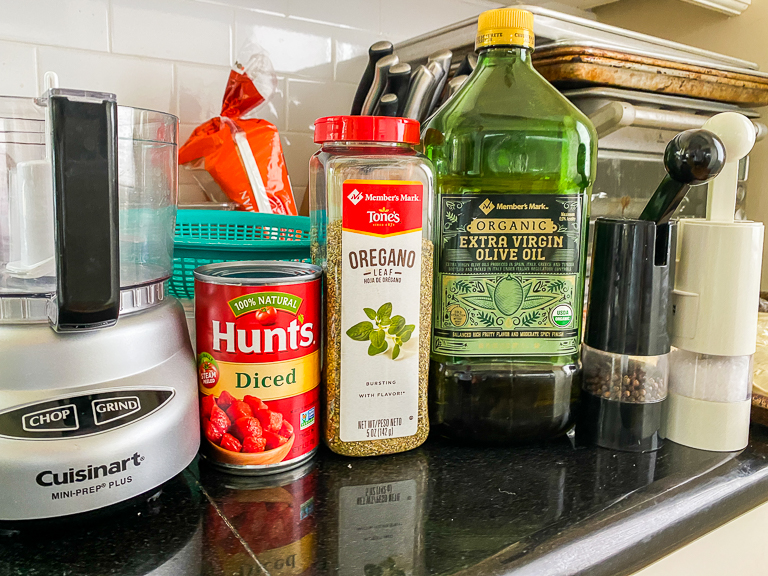 I maybe could have used Richard's tomatoes, but they're not quite ready yet. He is pretty proud of the little green one that just showed up a couple days ago. 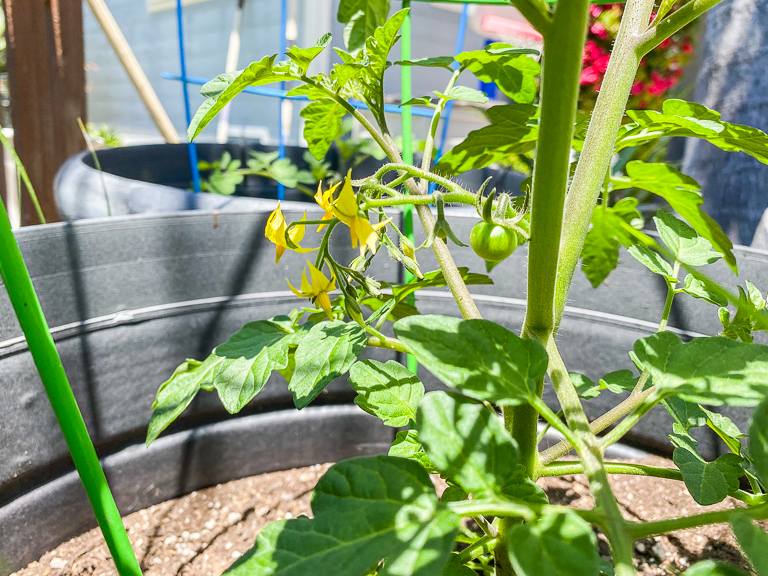 My mozzarella cheese is ready to slice up and place on the pizza. 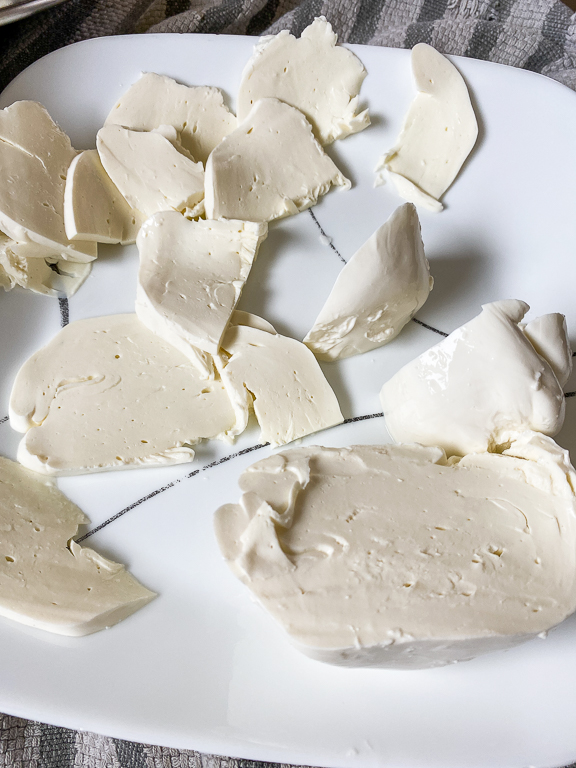 My dough is still super wet. I can barely pick it up without is running through my fingers. I liberally dusted my pizza peel with flour so it will hopefully slide onto my pizza stone.
Alli - What can I do to help? 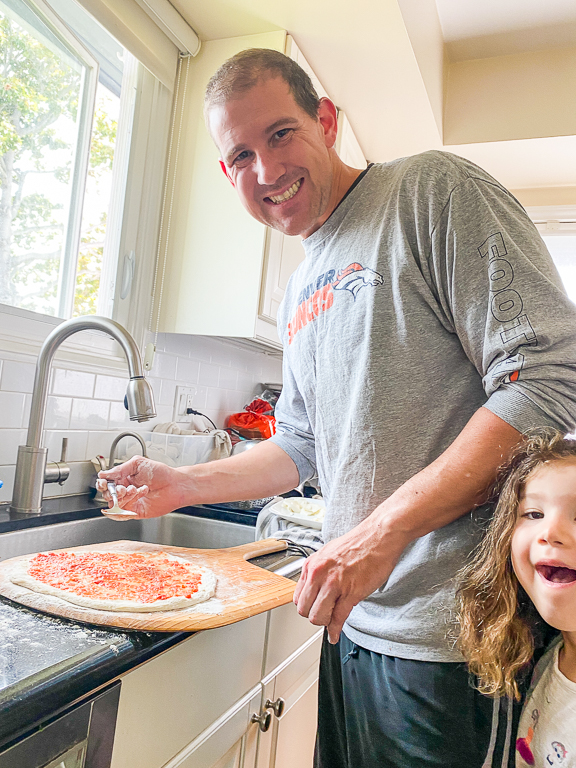 It goes in looking like this. Pizza dough, a light saucing of the tomatoes, a random spread of mozzarella, and a drizzle of olive oil on top. 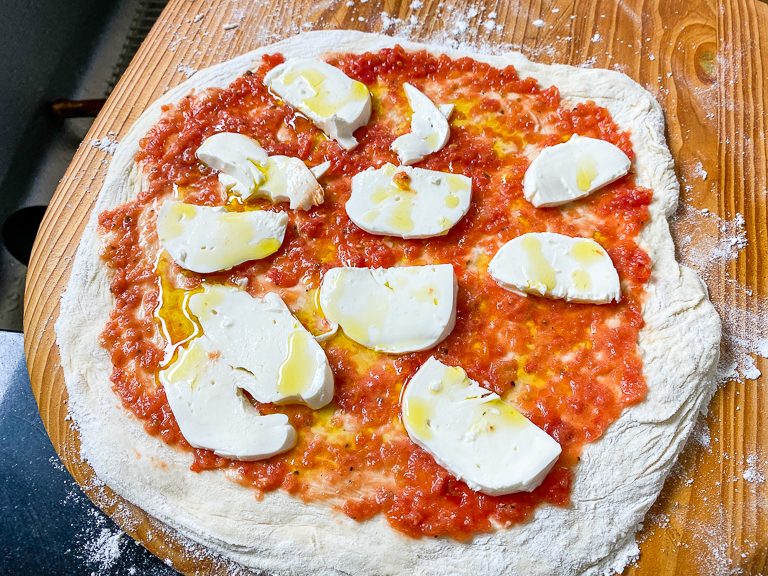 Eight minutes in a 550F oven and this is how it comes out. The cheese is melty, the crust is browned, and it's almost ready to eat. Can't forget the green basil to round this out. 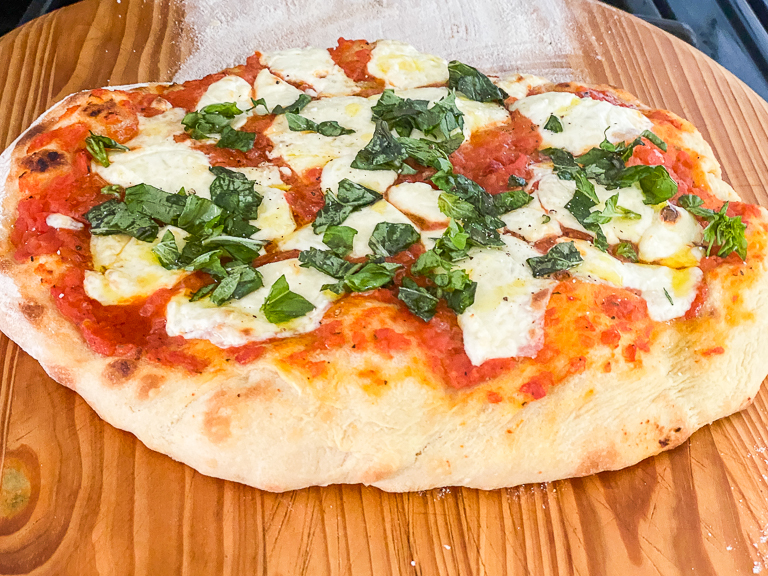 I'd say that's a success! 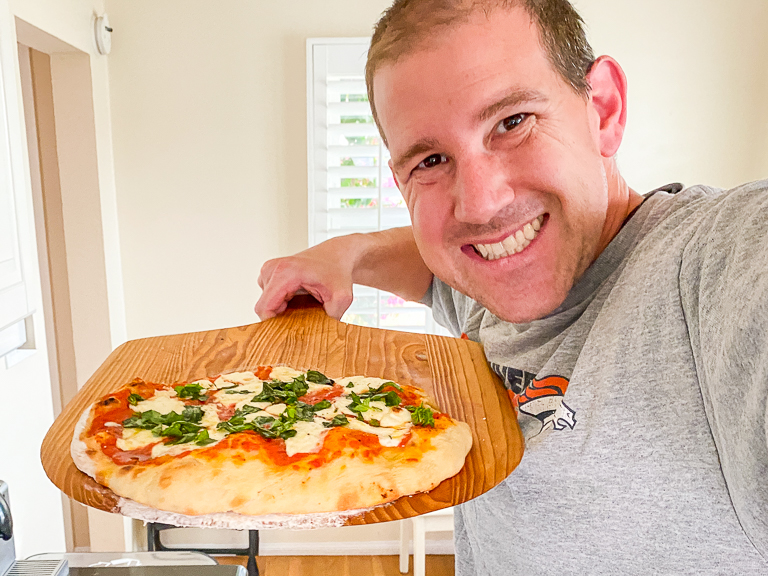 That recipe for the dough makes enough for 4 pizzas, so I was in the kitchen cranking out pizzas for everyone. Rich and Chi, the kids, Theresa, and myself. Good thing they cook quickly, but still it meant our dinner was a little staggered. 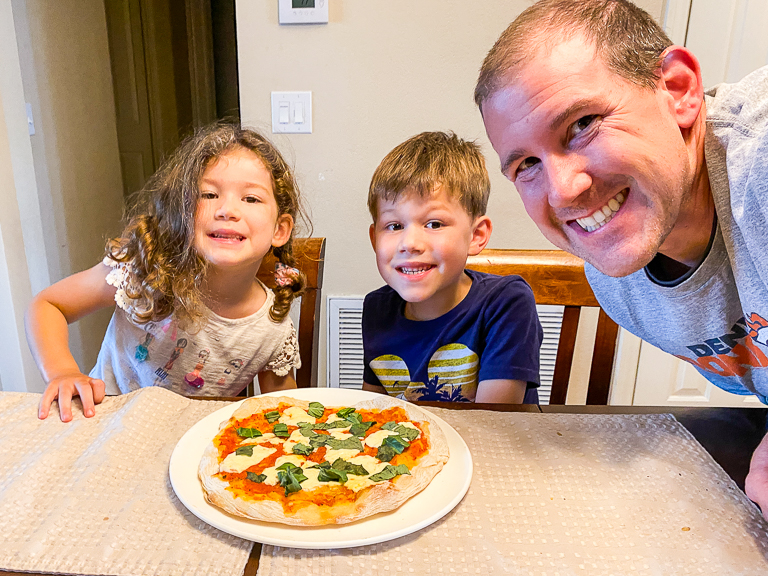 Mmm. This pizza was delicious. The fresh basil leaves on top along with the simple tomato sauce gave it a bright taste. Like this wasn't something that had stewed and sat for a while, but this is something that was just made fresh for you and whipped up quickly. 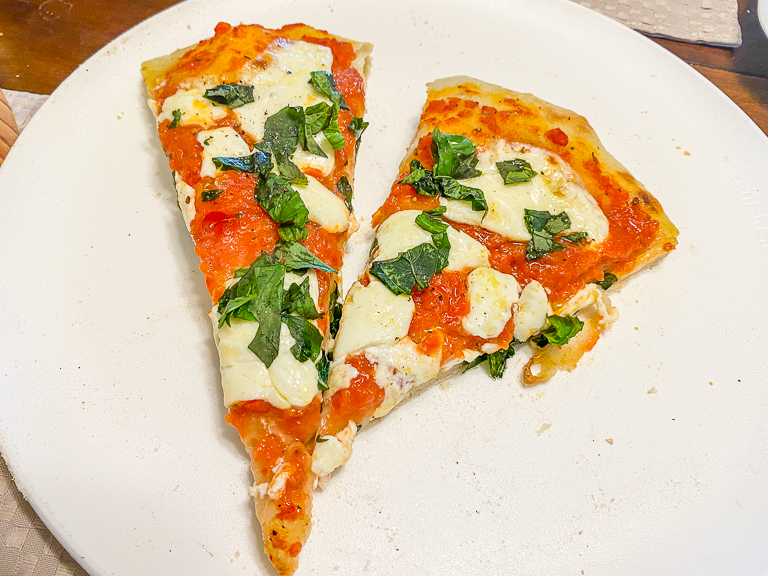 It gets the Theresa thumbs up, so you know it must be good. I don't intend for this to turn into a comparison between what the best pizza is, but so far between this one and the Chicago Deep Dish, everyone except me prefers the Pizza Margherita. Now to decide what we make next week! 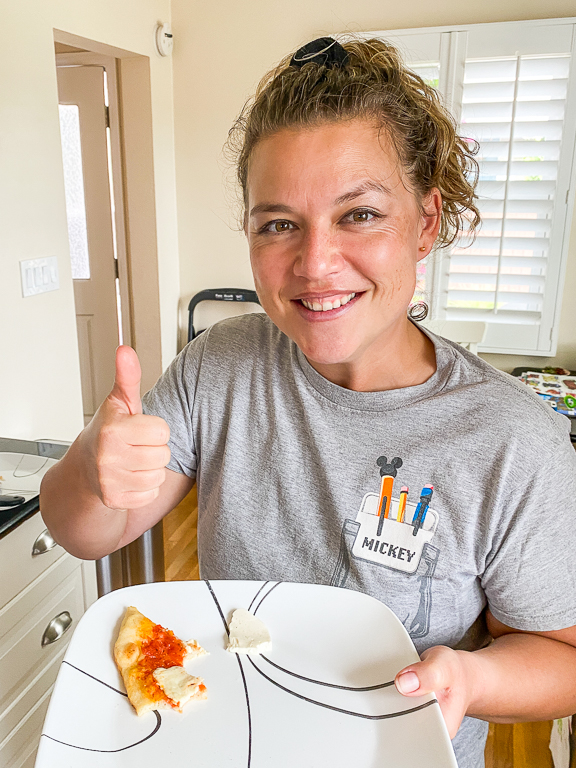