Skittles makes Freezer Pops? Knowing I like these kinds of things, a friend of mine sent me a text letting me know they existed. After a quick check on Walmart.com, 15 minutes later I had a box being shipped my way! 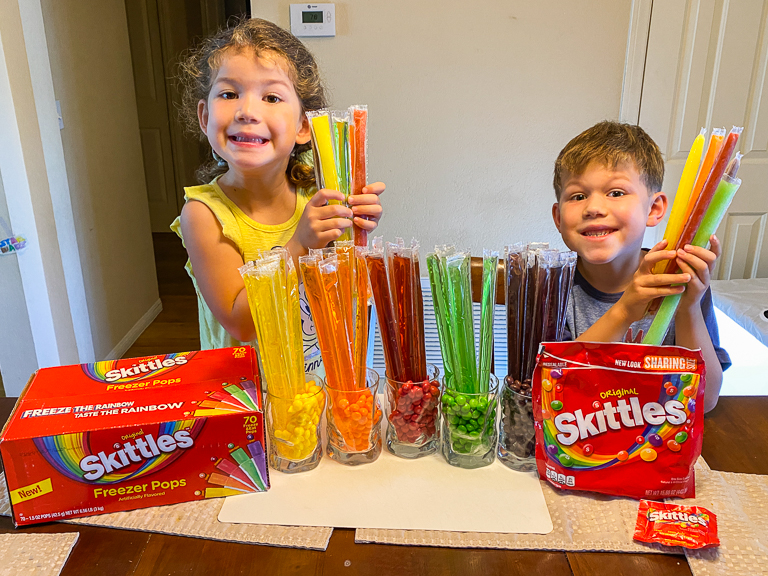 Alli has seen the box on the shelf in the garage and has been asking me about them continuously. Like every time we get home from a bike ride. After one particularly long bike ride, on a warm sunny day, I figured it would be the perfect time to cool off with a Skittles Freezer Pop taste test. 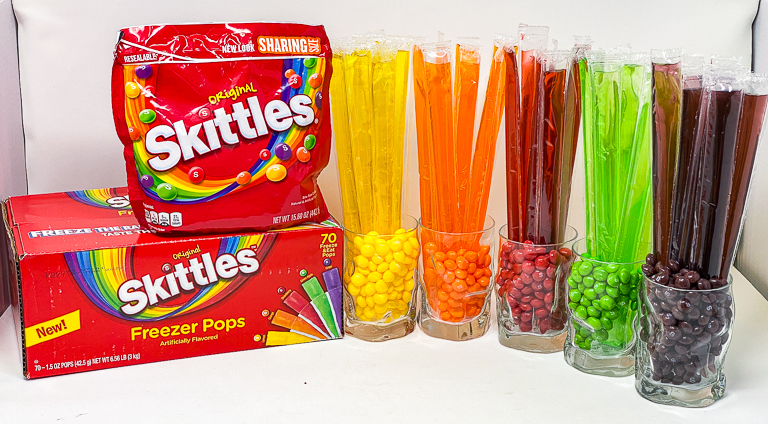 The box encourages us to "Freeze the Rainbow" and "Taste the Rainbow". Though Alli pointed out that they do not have a blue or blue raspberry. Very observant Alli. You do need blue to really make a rainbow. 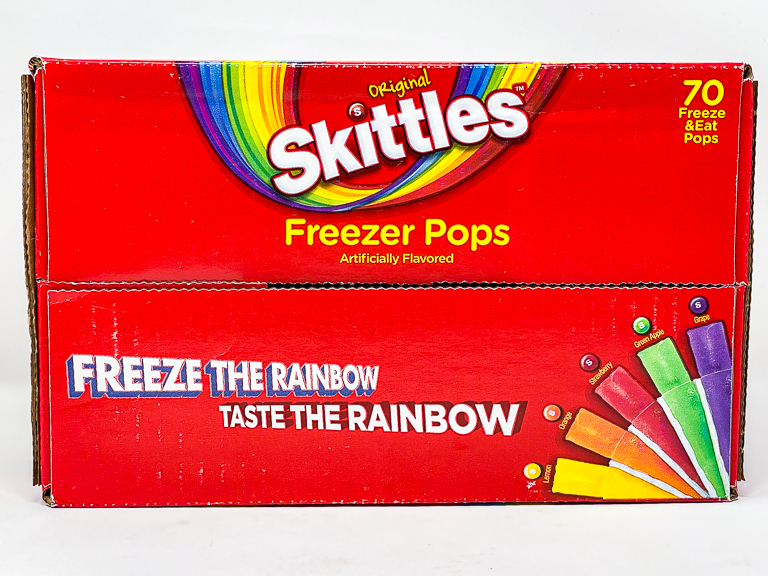 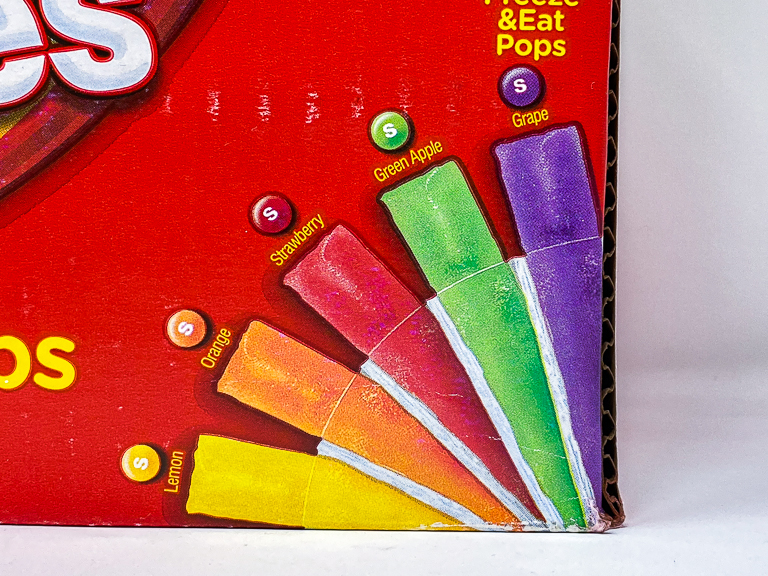 I grabbed a big bag of Skittles and filled a clear glass with each flavor (that was fun sorting each one). 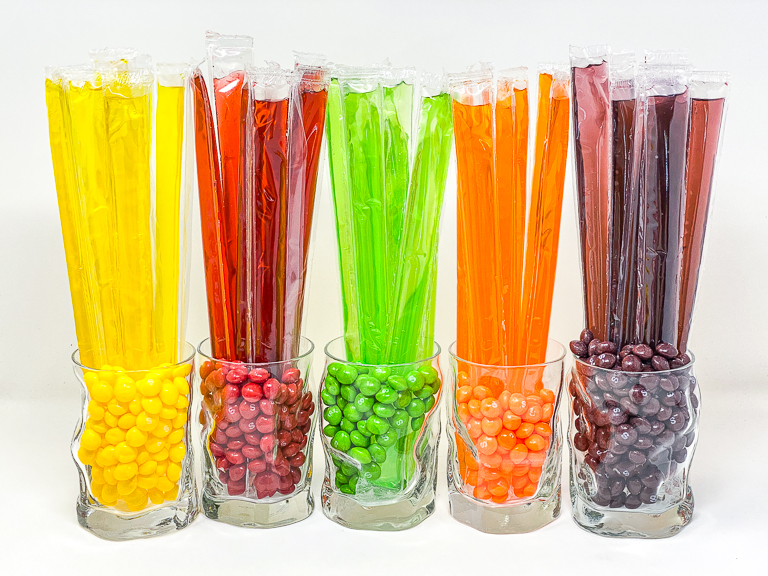 I had some of each flavor ready to go from the freezer.
How should we taste them? How about the order they are on the package. 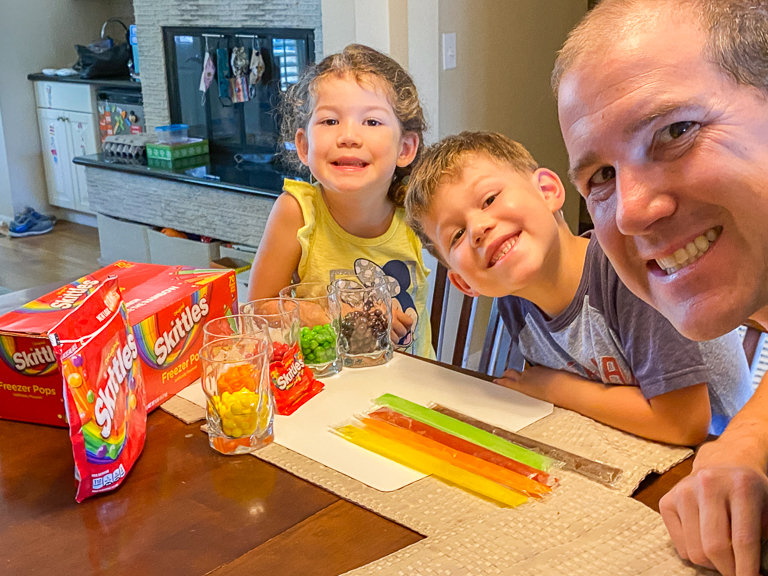 That means the first up is Lemon.
I cut the pops into thirds, yes thirds. Alli and Ian got the two ends, while I made due with the precarious middle. I just had to make sure I ate it quick. The pops are a bit slushy instead of being hard frozen. 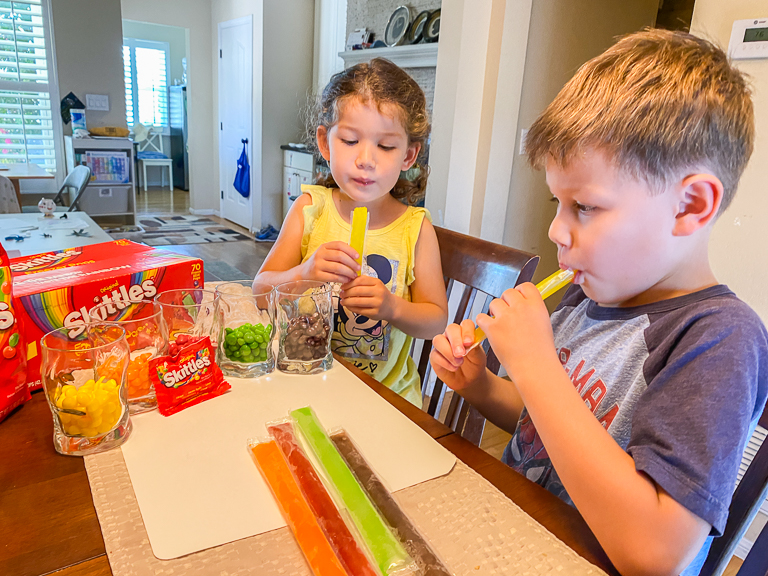 And after tasting the pops, we moved on to the candies. 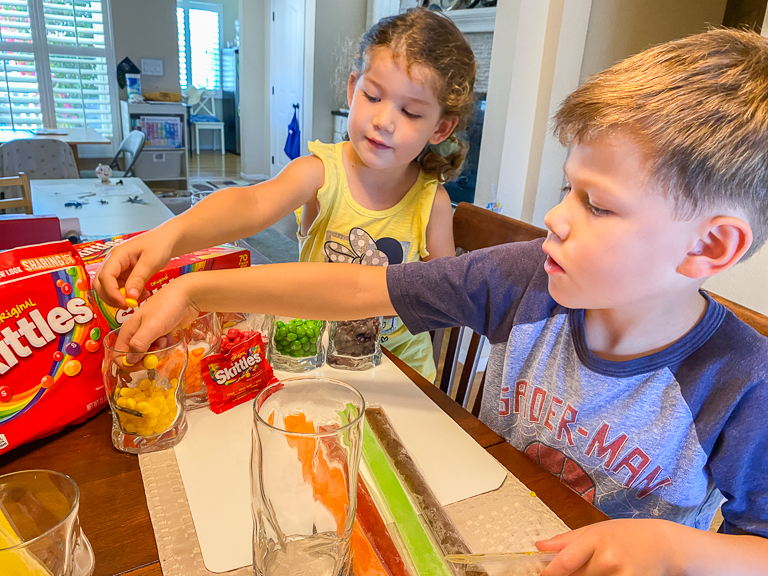 Ian thought the lemon pop tasted more sweet than sour. He thought the pop was better than the candy.
Theresa took a bite of the freezer pop and thought it tasted like lemon cleaner.
I can see that. Lemon is not my favorite. 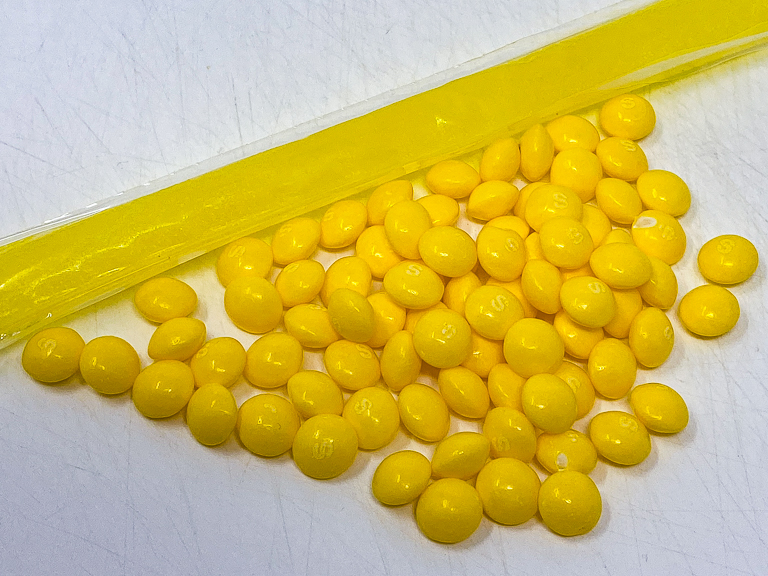 Next it was time for Orange. It's not a very strong orange flavor. Ian suggested that it had an Orange Cream flavor. After the first one, Theresa was done with the Freezer Pops, only sampling the candy. Alli likes the orange candy better than the orange freezer pop. 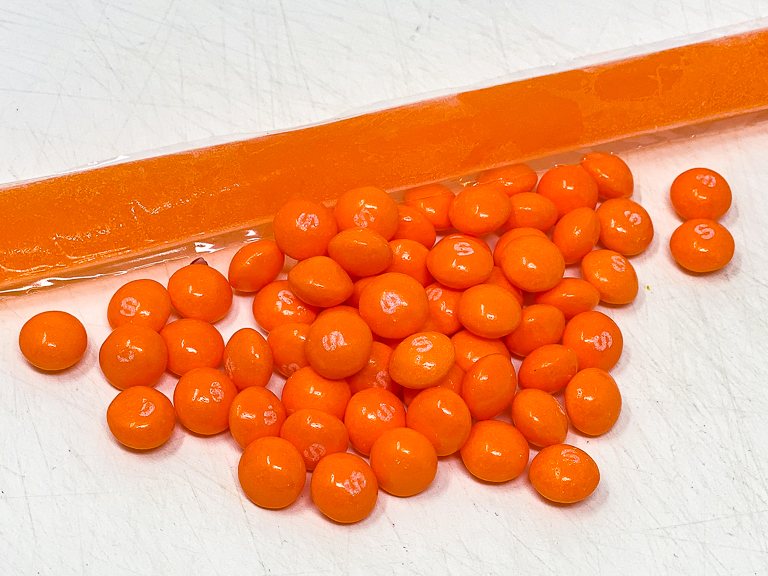 I'm glad that red Skittles are Strawberry instead of Cherry. There's too many Cherry candies and not enough Strawberry candies in general.
Again for me, the flavor could be a bit more bold. I want a strong strawberry flavor.
Alli thinks the Strawberry Freezer Pop barely beats the Orange Freezer Pop. Ian likes the strawberry juice better than the frozen pop. 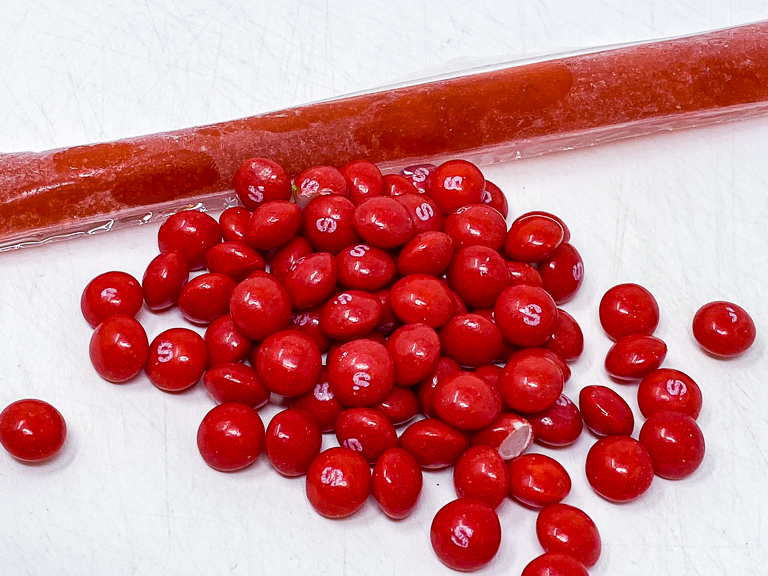 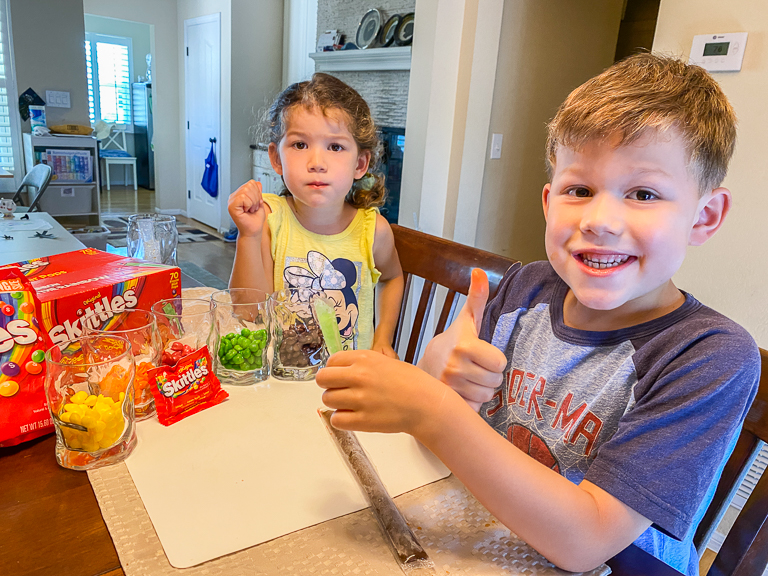 Bleh. Green Apple isn't my favorite. But there's no accounting for taste. Ian said this is SOOO GOOD! And he loved the Green Apple candy too. 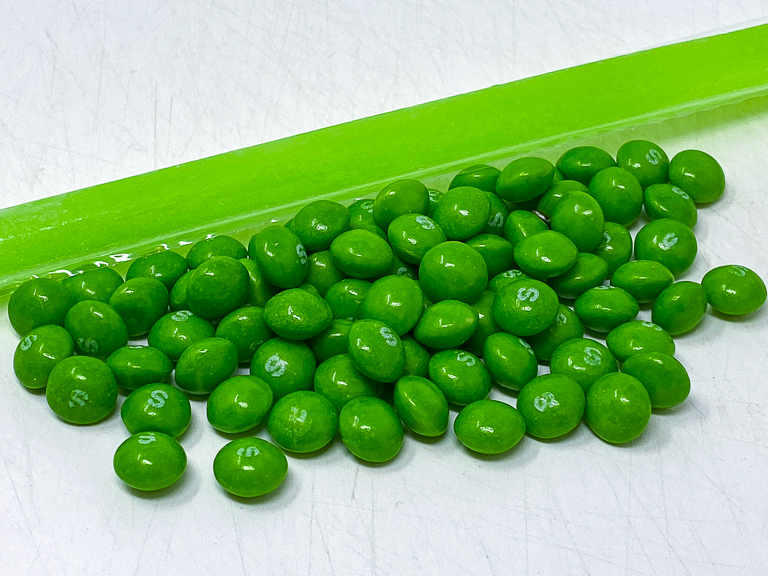 Perhaps he's studying to determine which vintage of grape this Grape Frozen Pop is from. 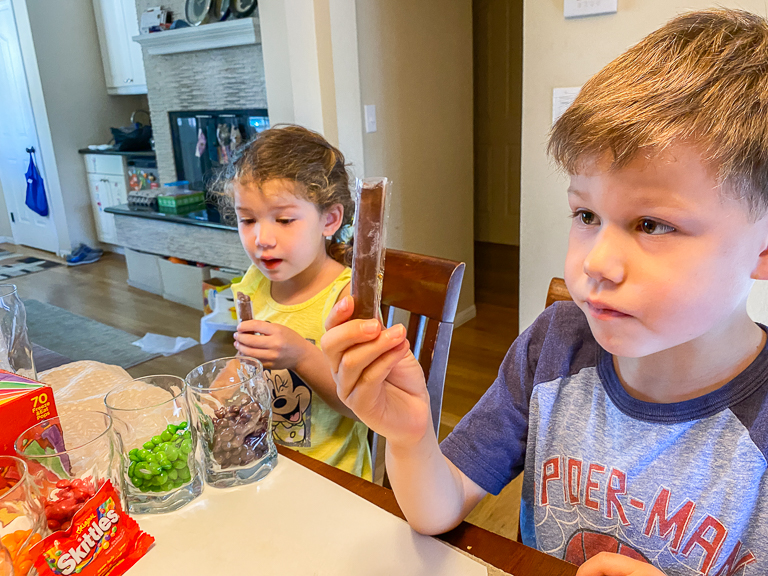 My favorite candy is grape and so I had an idea that my favorite pop would be grape too. I was right. Grape is the best. The kids thought it was just alright. 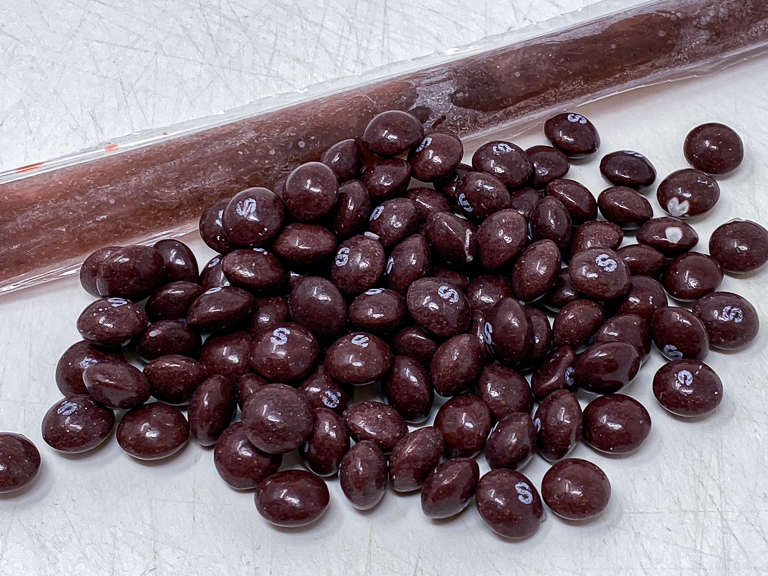 In general, I thought these freezer pops were just okay. The flavors of the freezer pops seemed generic, but perhaps Skittles don't have a distinct flavor to me. But the kids liked them, which is really what matters. I tossed an extra handful in the freezer for us to enjoy in the future. 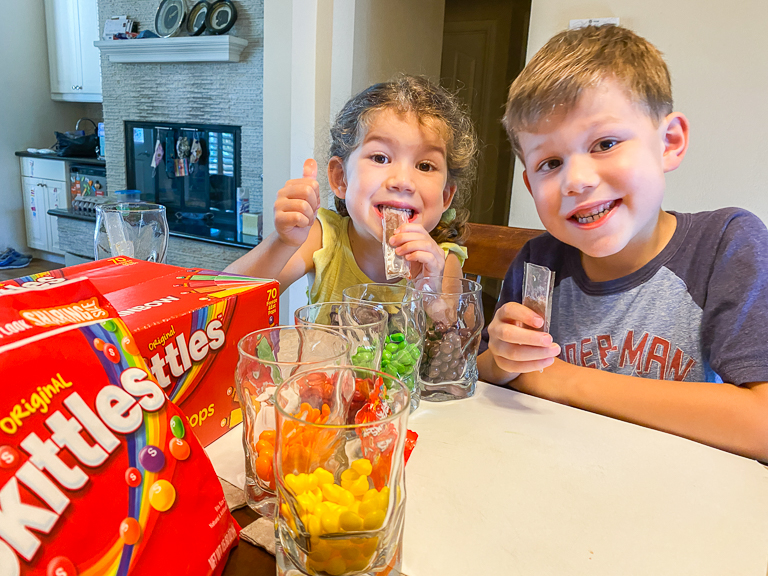