Tonight's meal is going to be Finger Lickin' Good! That's because tonight, Kentucky Fried Chicken has come home to the Flowers' House! 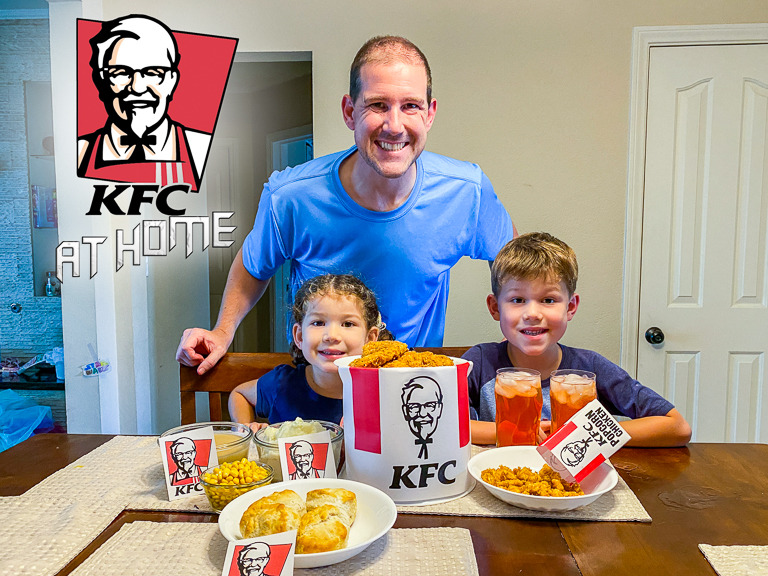 The main entree is obvious, but we've got to figure out what side dishes we're going to have to go with it. We could just make a brown gravy, but no, Theresa is going to be making gravy from this copycat KFC gravy recipe. 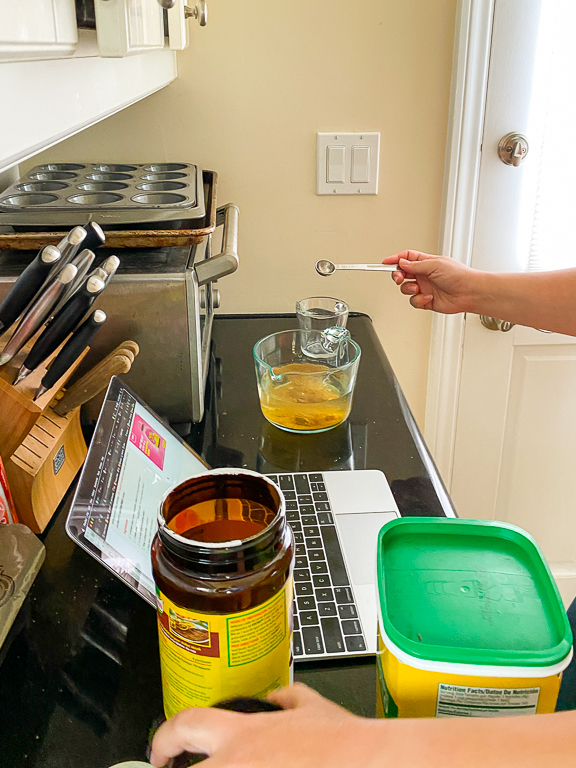 I had cut up a few chicken pieces and put them in a ziplock bag. They need to marinade in a buttermilk and egg wash for an hour. I didn't know you could make buttermilk at home, but apparently all you need is a tablespoon of vinegar and a cup of milk. Let it sit for 5 minutes and it's buttermilk. 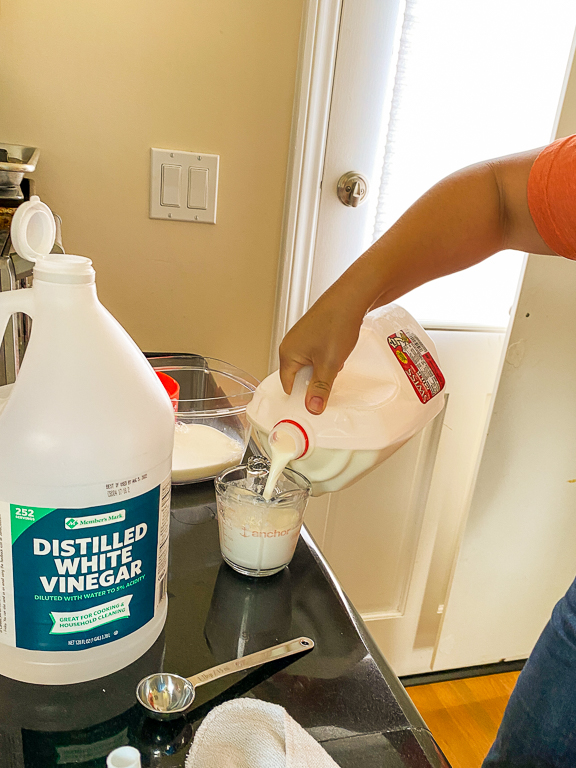 If we're going to recreate that KFC breading, we're going to need those famous 11 herbs and spices. Apparently back in 2016, a nephew of Colonel Sanders found a handwritten note in an old scrapbook which listed the ingredients. It was then published in the Chicago Tribune and now it belongs to the world! If this isn't the real recipe, it's really close! 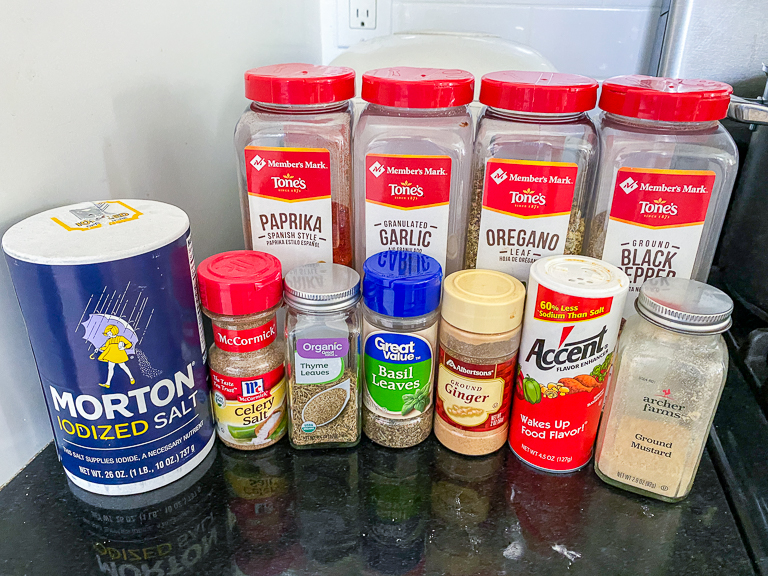 Those famous spices are: Salt, Thyme, Basil, Oregano, Celery Salt, Black Pepper, Dry Mustard, Paprika, Garlic Salt, Ground Ginger, and White Pepper. Plus just a little MSG to finish it off. Not having any White Pepper, I opted to add a bit more Black Pepper. It probably would have been a good idea to put these spices through the grinder to make everything a little finer. 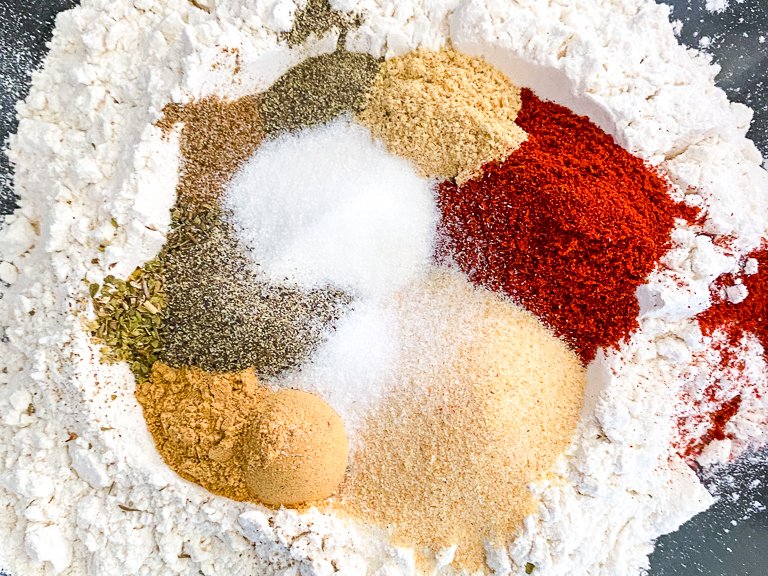 The chicken came out of the buttermilk, went into the breading, and then goes into the hot oil. 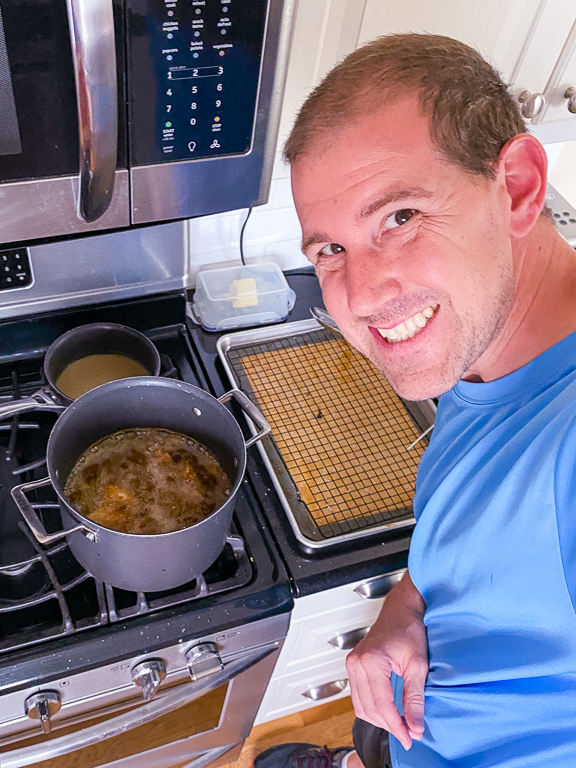 When we celebrated Kentucky Day back in October, we visited KFC. There was a tasty version of Mountain Dew that is exclusive to KFC called Sweet Lightning. It's a Sweet Peach and Honey flavored Dew. I think we can make something like that at home. 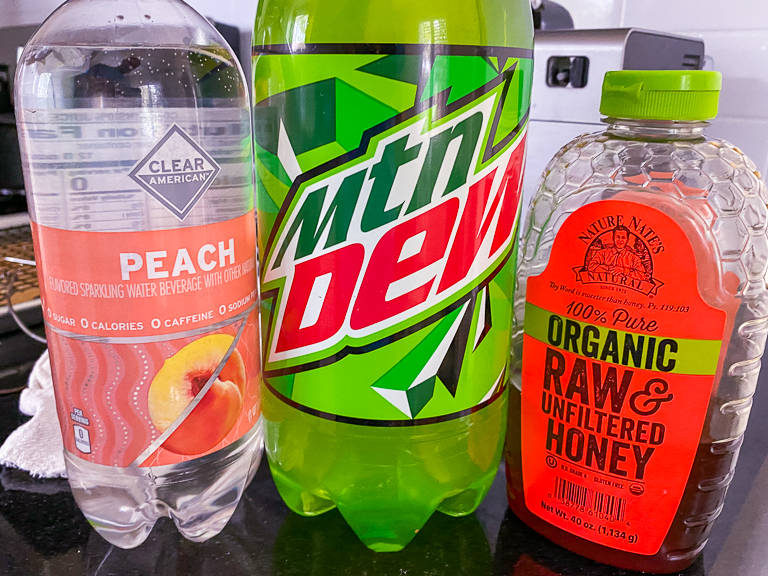 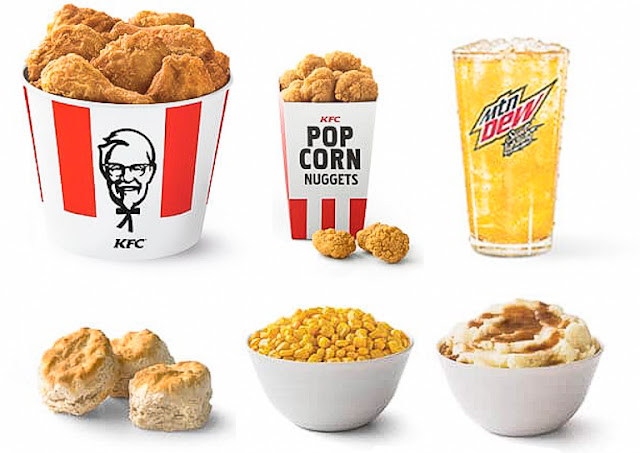 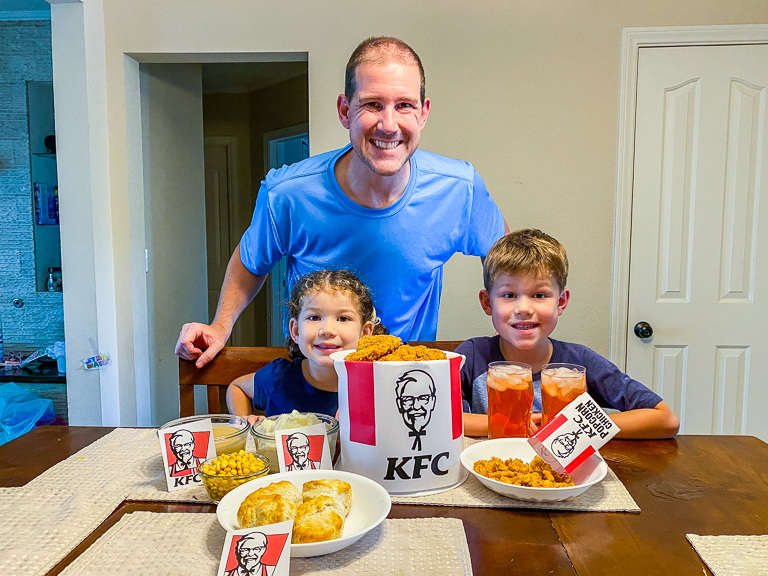 If I'm going to make containers, it's got to look like we're eating out of a bucket. But I know we're not going to have nearly enough chicken to fill up a bucket. And so, I improvise. 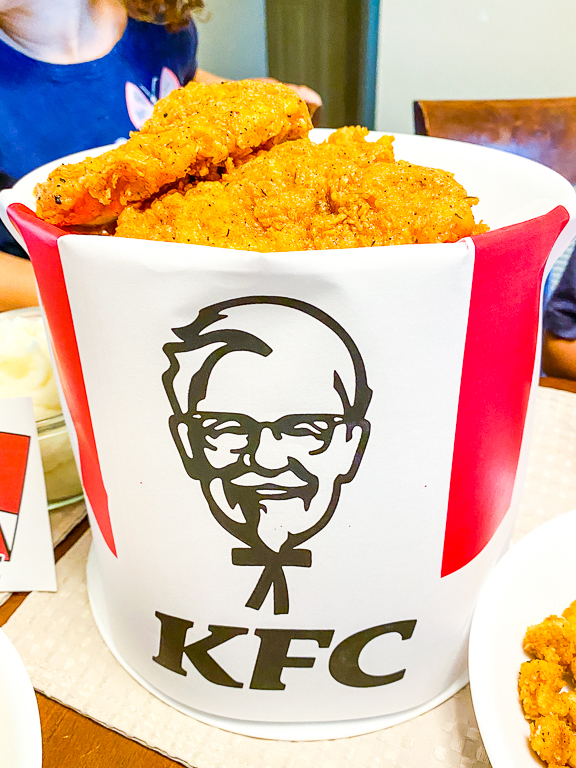 Using a few bowls stacked on top of each other, I can put the chicken in the top bowl and it'll still look like a whole bucket. 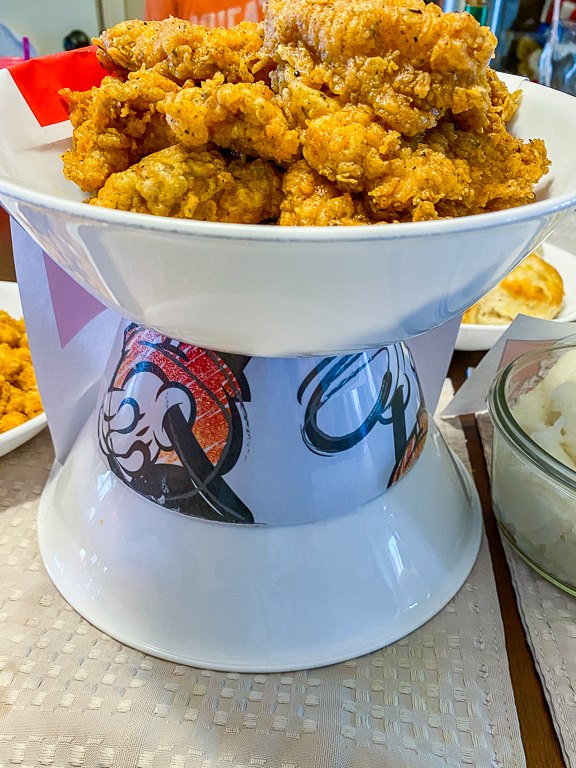 The kids devoured these Popcorn Chicken pieces. They're like mini chicken nuggets! 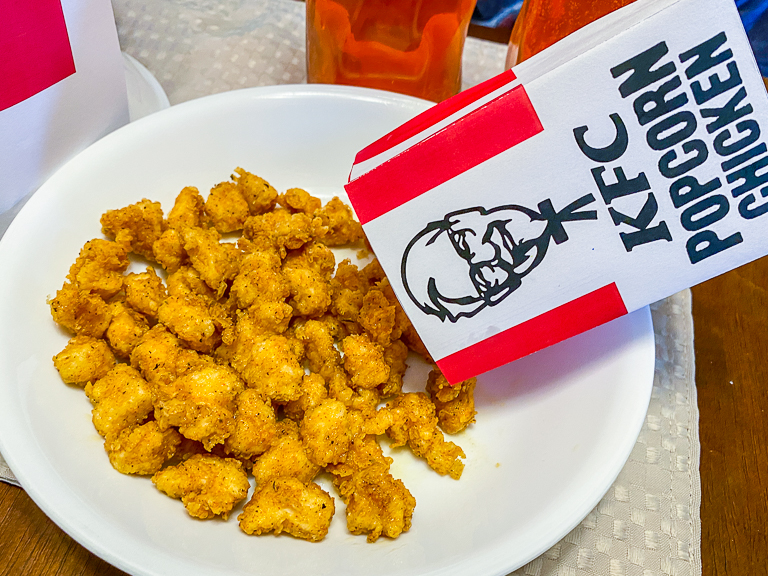 In an effort to be authentic, we used instant mashed potato flakes and followed this recipe. They turned out about as good as they could be. The gravy though. That was fantastic! I thought it tasted like KFC's gravy. T thought a little something was missing, though it was still delicious.
The corn was corn. 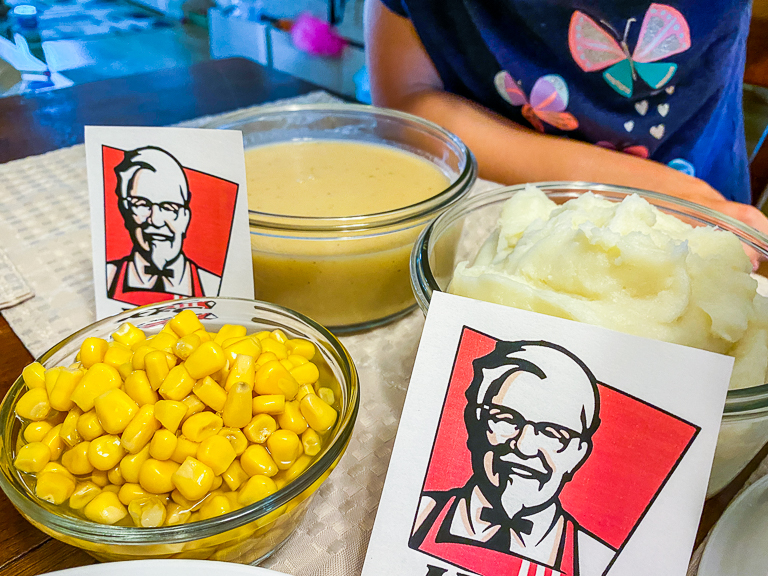 For the biscuits, frozen Pillsbury biscuits are a pretty close approximation to what you'd get from KFC. 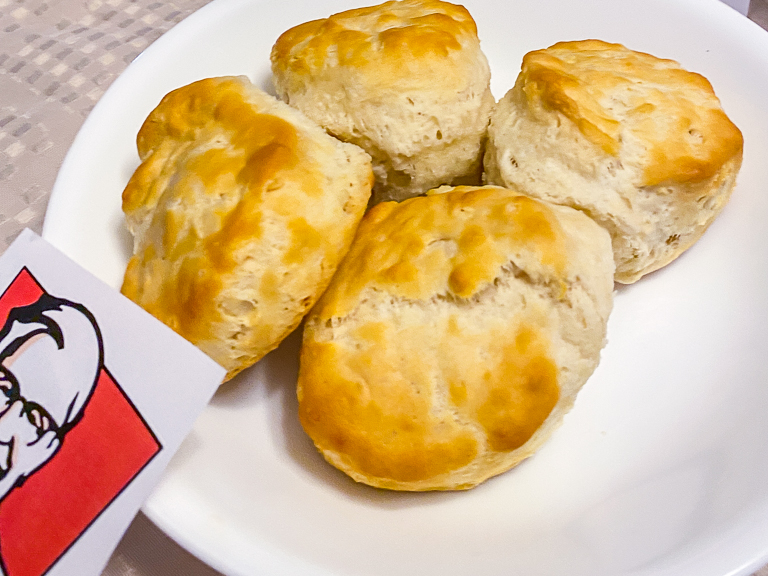 My Sweet Lightning Mountain Dew turned out so good too! 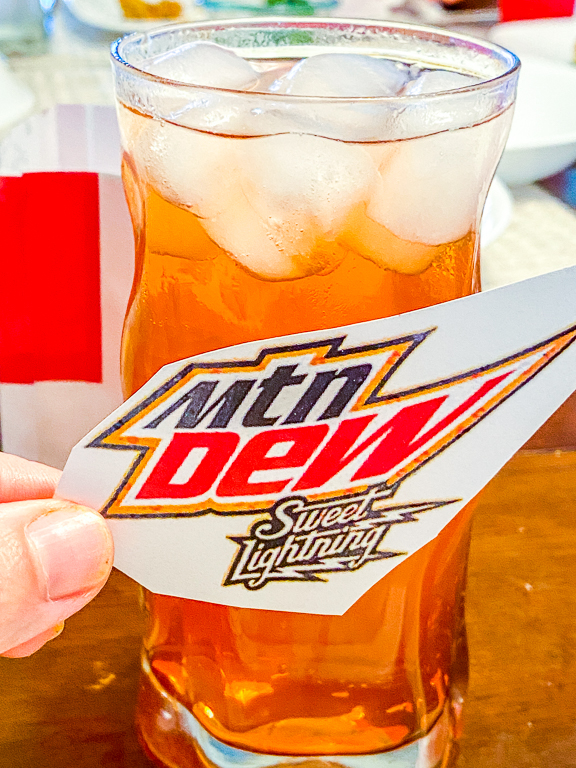 A tasty plate! I think the breading on the chicken turned out great! It's very close. I still need to learn a little more about frying chicken, and get the oil a little hotter so the breading sticks to the chicken more. I'm sure I'll get more chances as we continue making more meals at home. 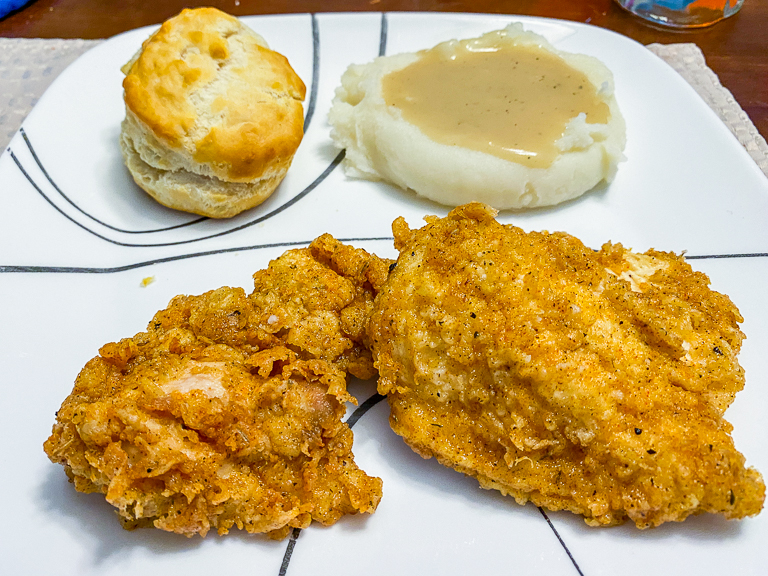 I'd call KFC at home a success! 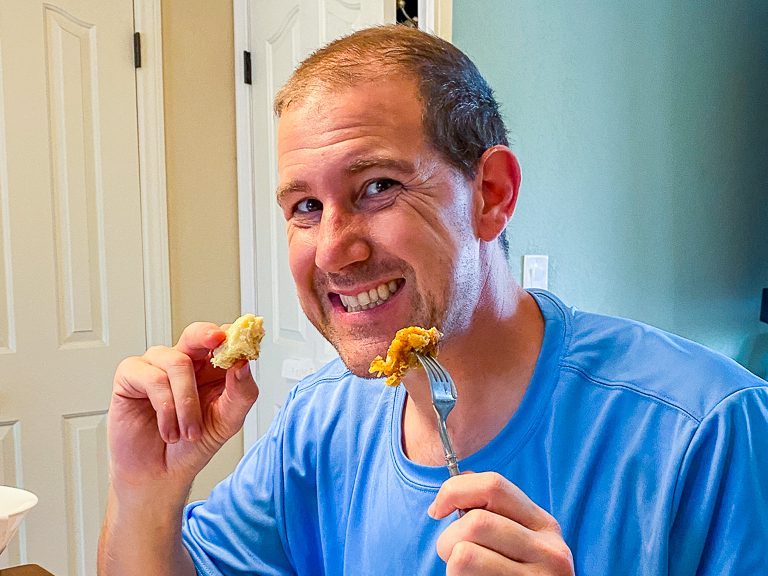