This "Made at Home" series has been a lot of fun, and we've got a lot more planned. It's a wonder that this one took so long to get to. During normal times, we'd be eating at the Old Time Noodle House almost every weekend. So often that they know our order before we even say anything. We've got to try making it at home. 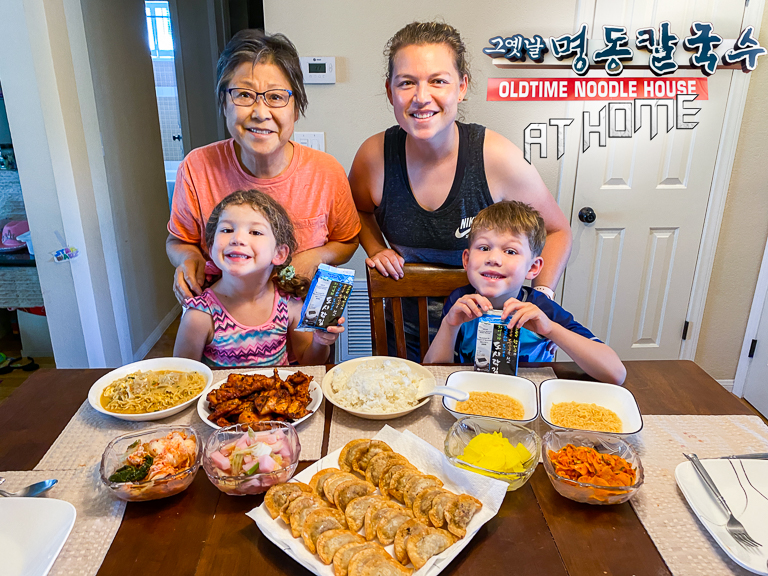 Our meal at the Old Time Noodle House restaurant starts with tongchimi (radish water kimchi), and cabbage kimchi. Then we get an order of wontons to split for the table. And between the four of us, we'll get a meat entree (usually the spicy pork or chicken), and a dumpling ramen. 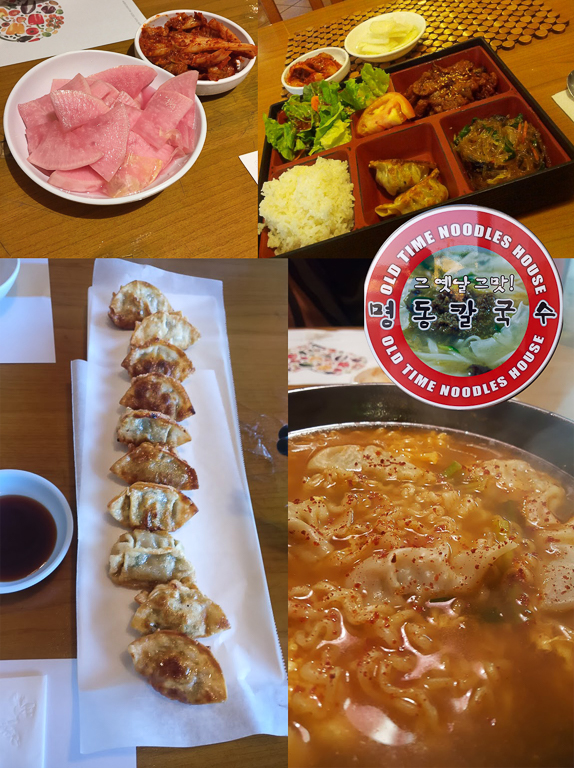 Theresa and I prepped the wontons about a week ago, using the food processor to chop up all the ingredients and then stuffing the wonton wrappers. We froze them all individually so we could fry them up whenever we wanted. And here's the recipe we used. 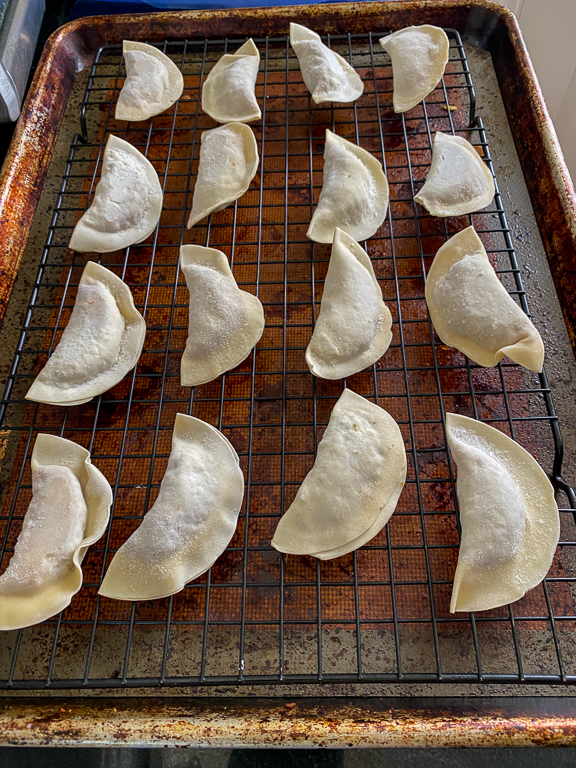 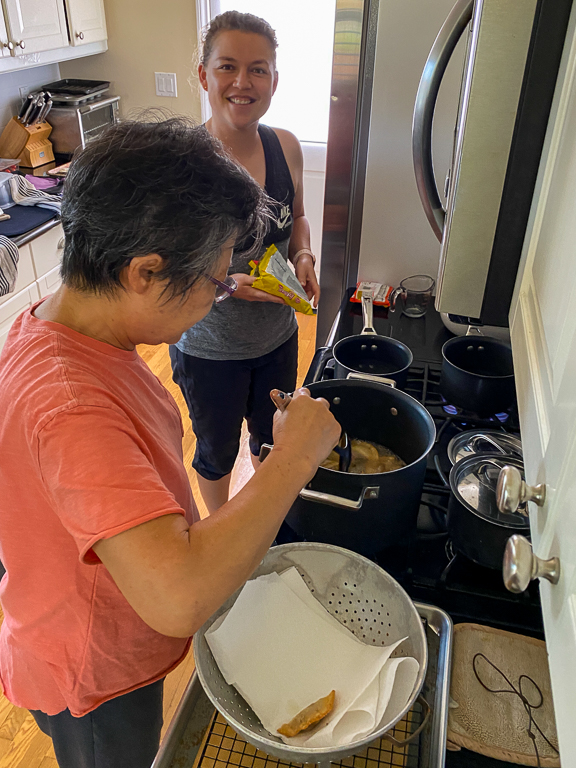 One of the things you want to make sure of is that they don't get a "frog belly" by leaving them on one side too long. 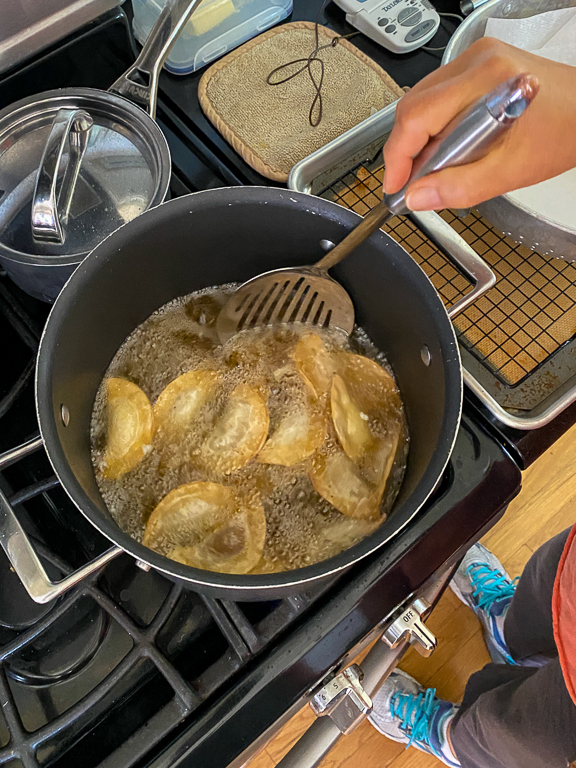 For the ramen, Theresa got this package of Jin Ramen, spicy. 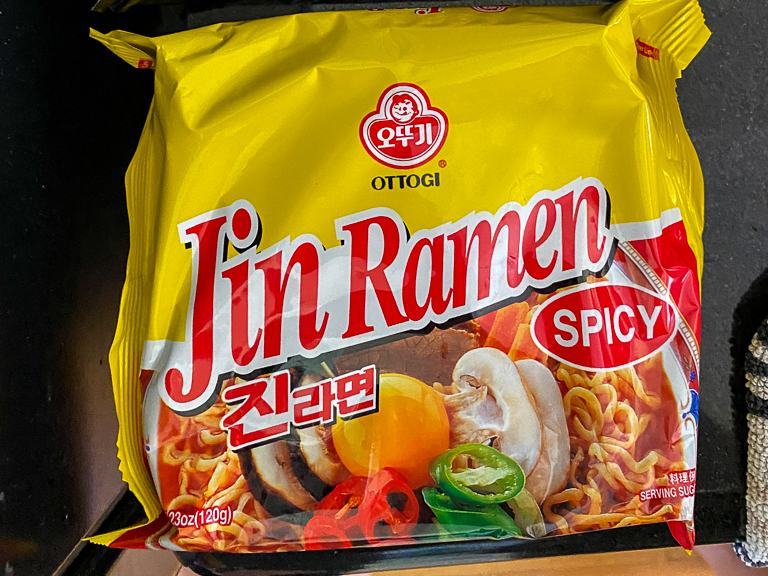 Into the boiling water goes ramen, plus a couple of the wonton dumplings that we made. The kids are getting their own ramen that's not spicy. 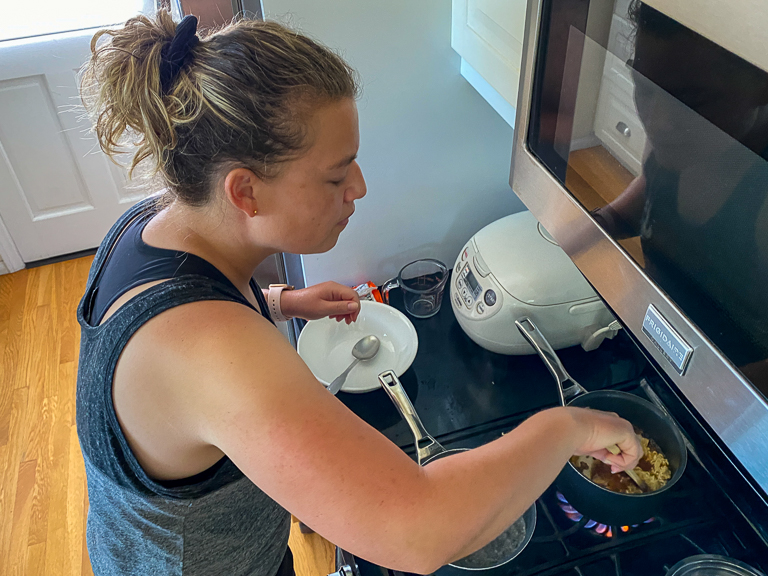 I'm in charge of the meat tonight. We'll be having a spicy chicken, made from chicken thighs. The thighs will be more flavorful than any dry chicken breast. We had looked for a good Korean marinade for a while until Theresa found this one. You know it'll be good when they tell you to "grate an onion" and "grate an apple". It's a really taste result. 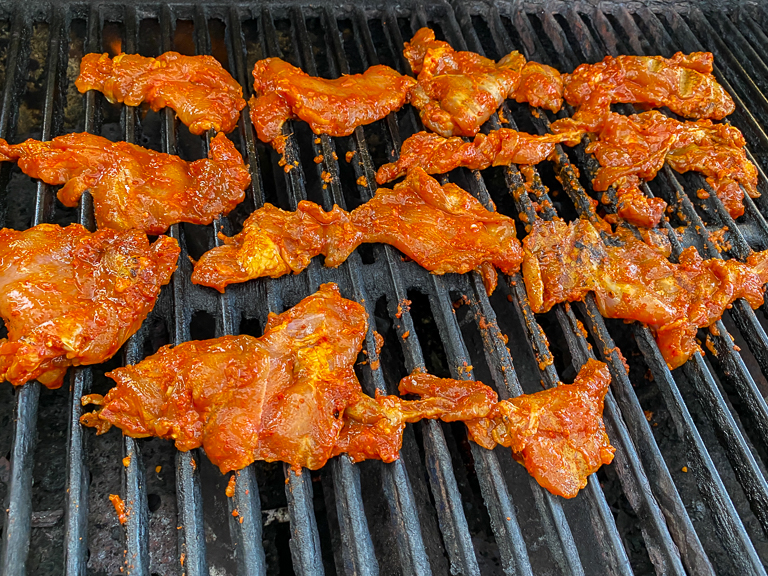 Alli loves the dongchimi when we go to the out. So much so that our servers bring an extra dish out just for her. If we're going to recreate Old Time Noodle House to her satisfaction, she's going to want that radish water kimchi.
Chi has never made it herself before, but was ready to give it a shot. 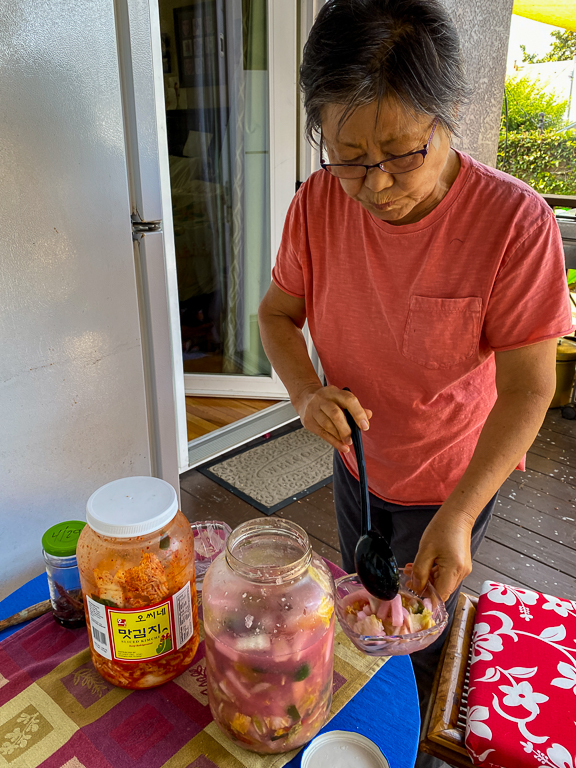 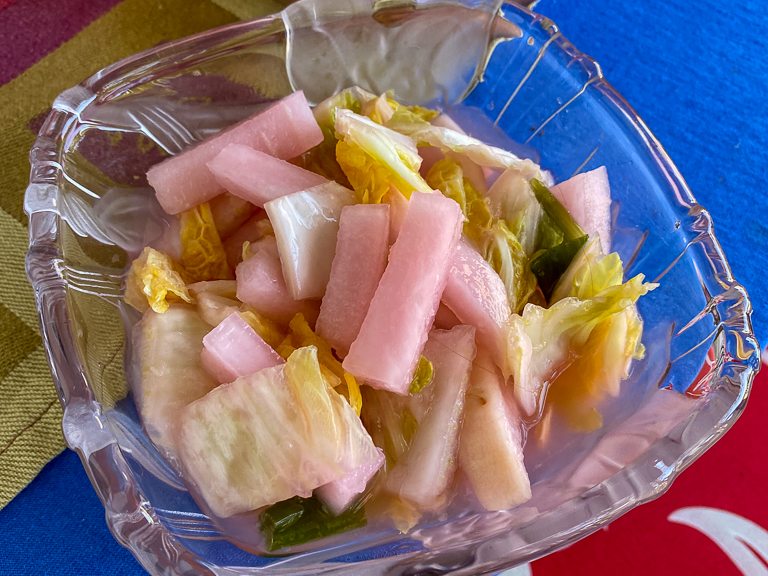 And with my boxed meal, there's always some sort of banchan. 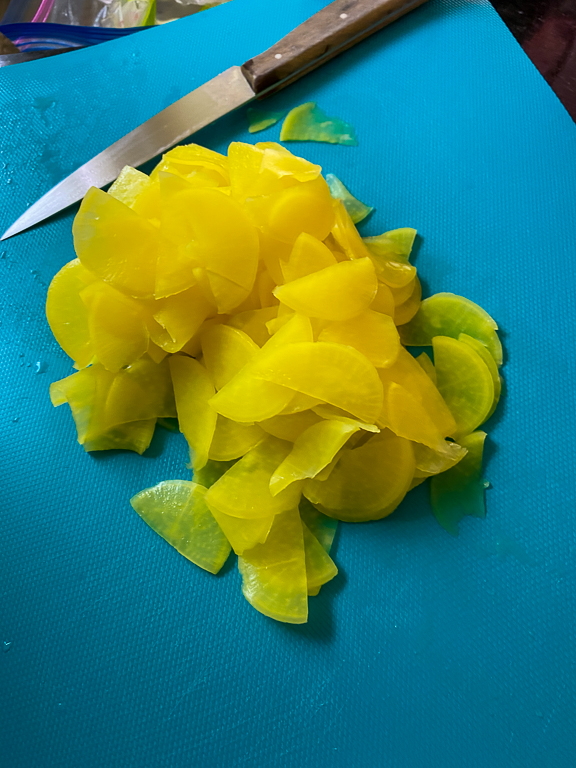 Chi cut up some takuan. 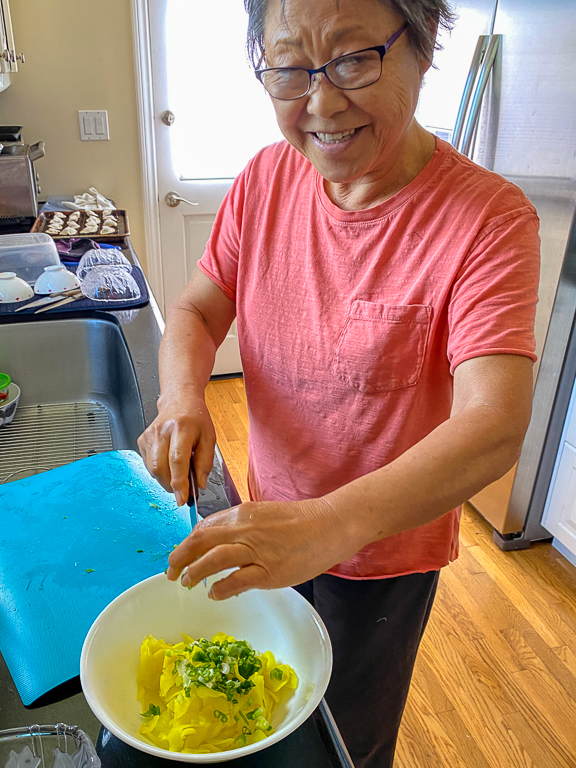 And then using red pepper flakes, made a spicy version too. 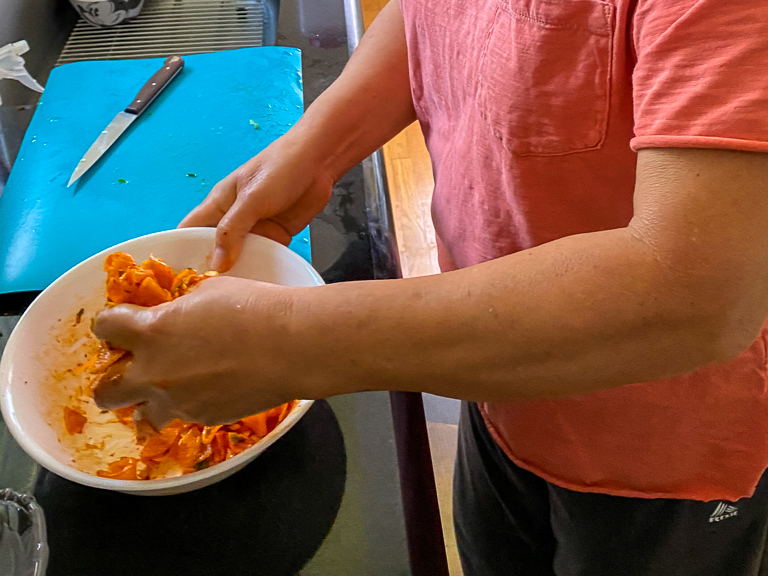 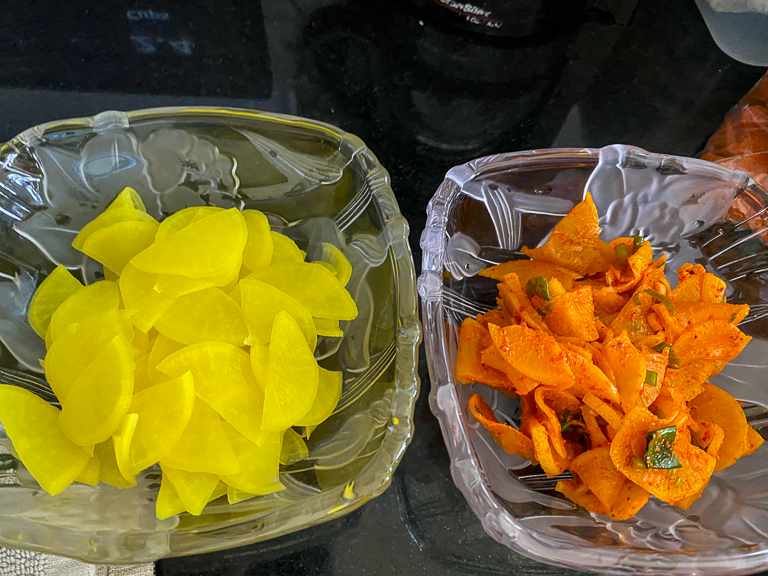 Excellent job on the meal everyone!
At the Old Time Noodle House they always bring out a special package of dried seaweed just for the kids. We have dried seaweed sheets for them tonight too. 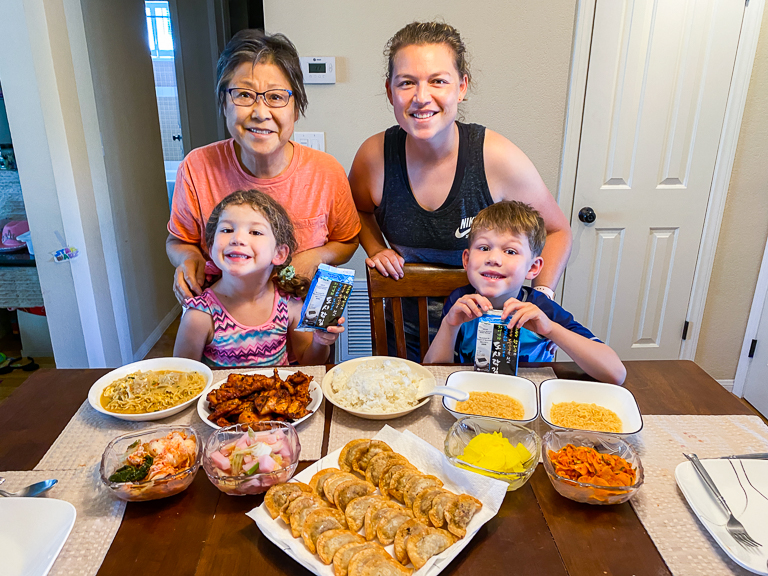 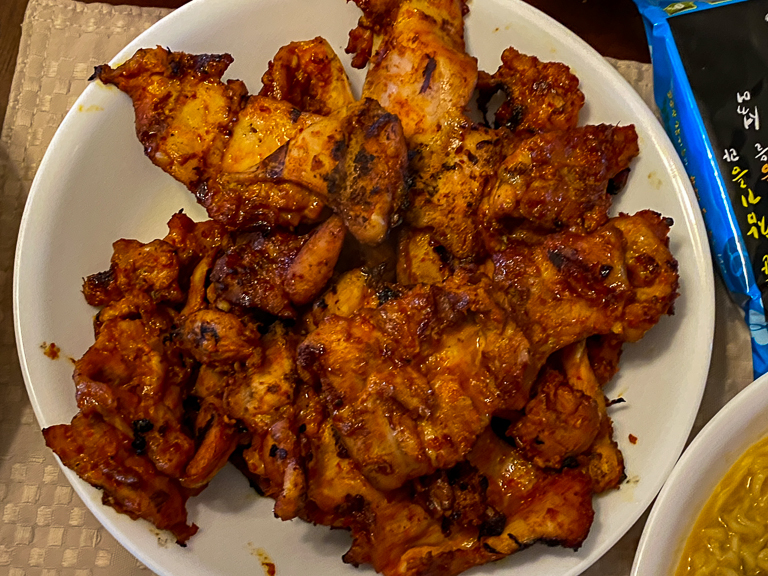 And my spicy ramen with dumplings turned out pretty good. 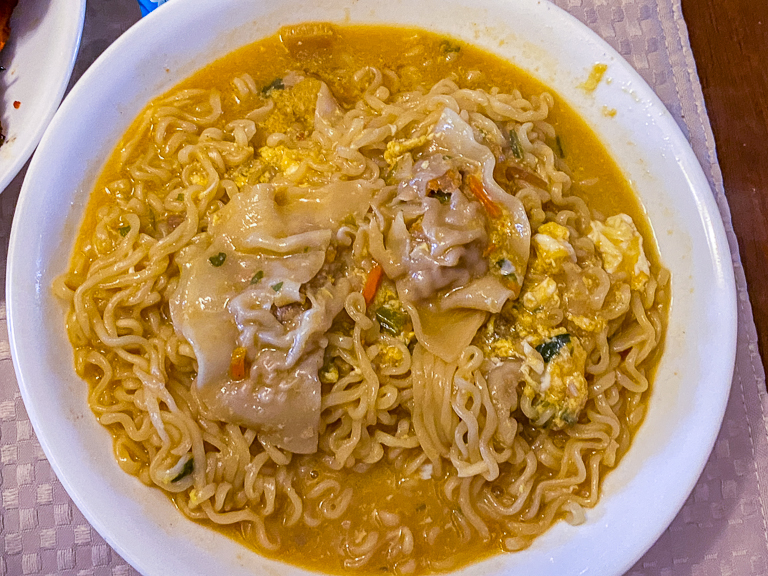 The kids have regular ramen noodles with no spice, just like at the restaurant. 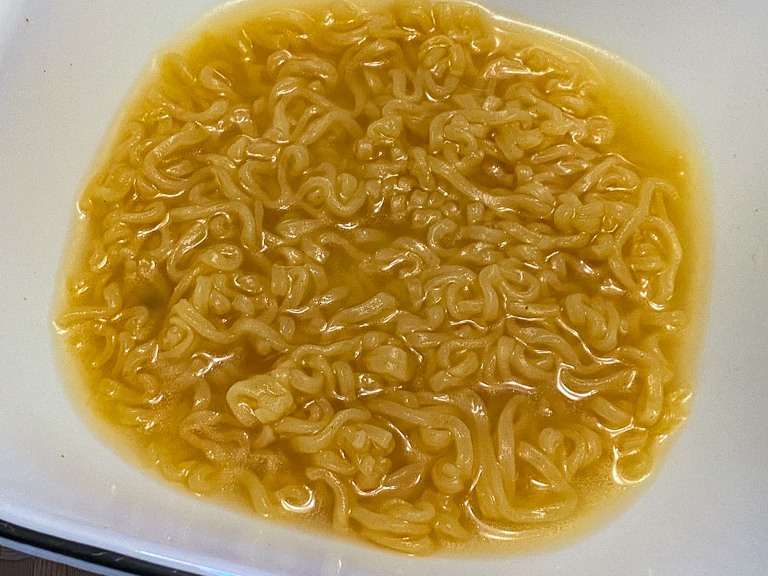 And that's about $25 worth of wontons if we'd have ordered them from the restaurant. 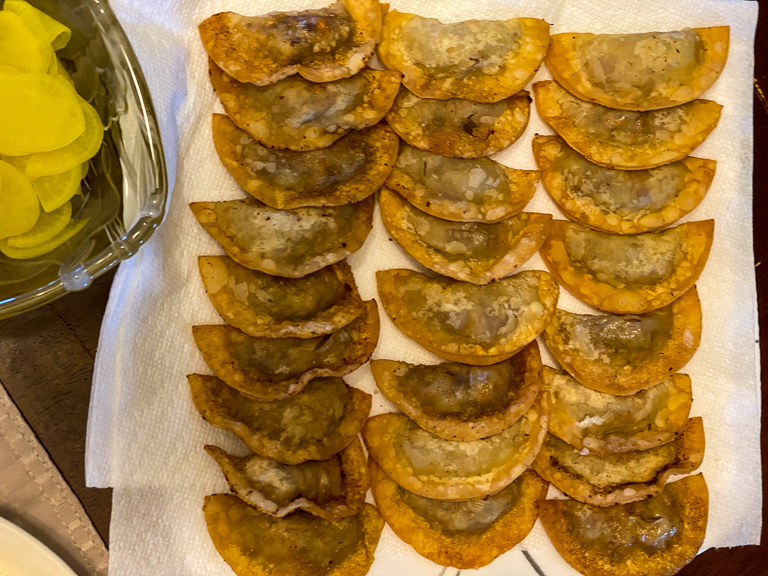 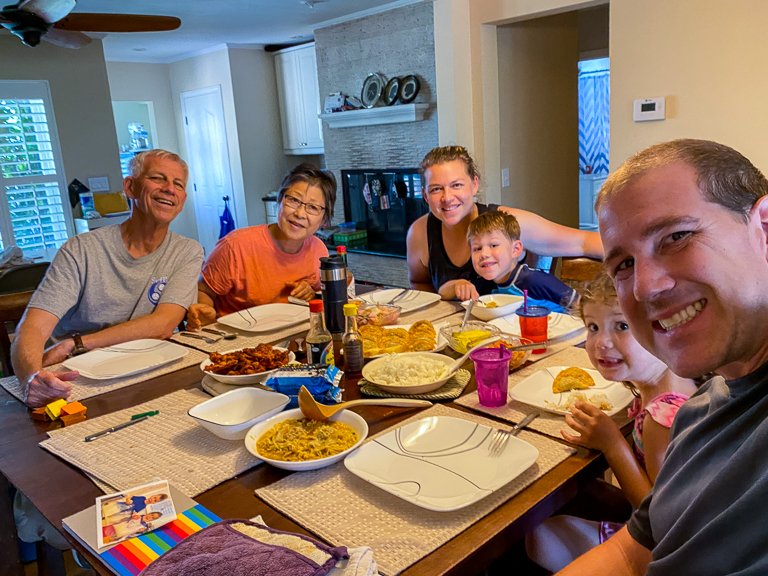 Alright, here's the ultimate test. Will the dongchimi get a passing grade? 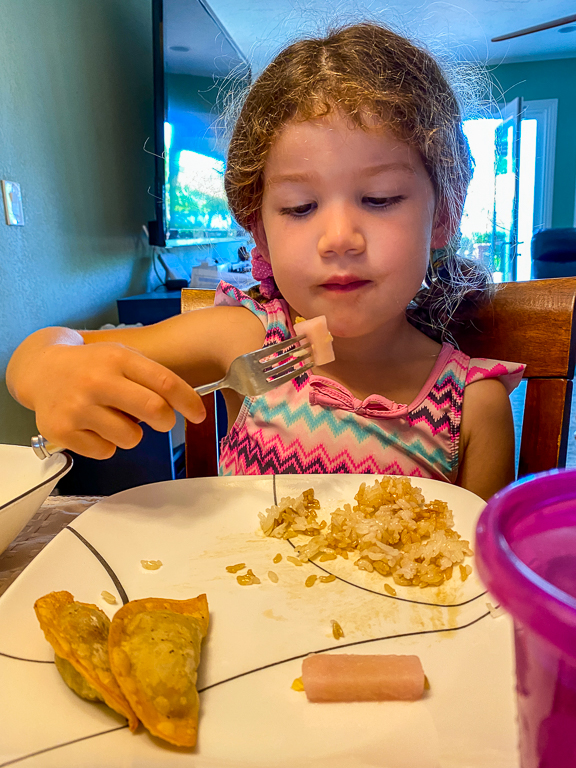 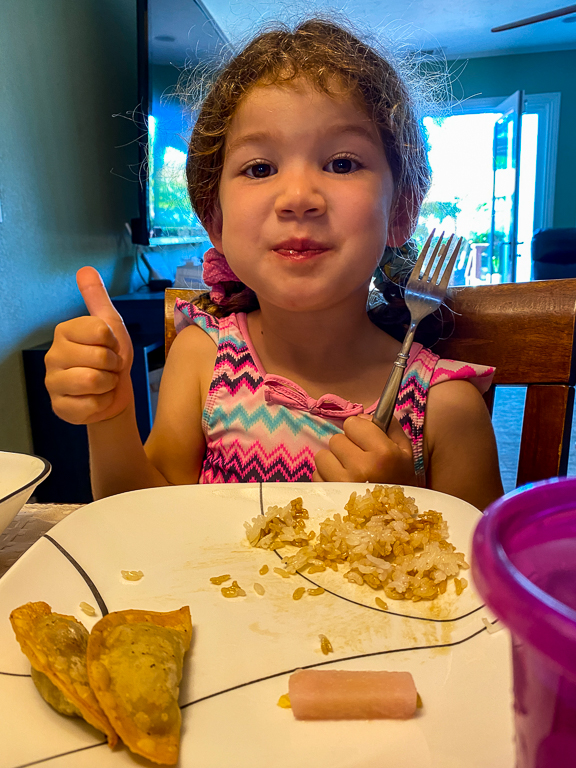 My plate tonight looks pretty identical to the one I would have at the Old Time Noodle House too. 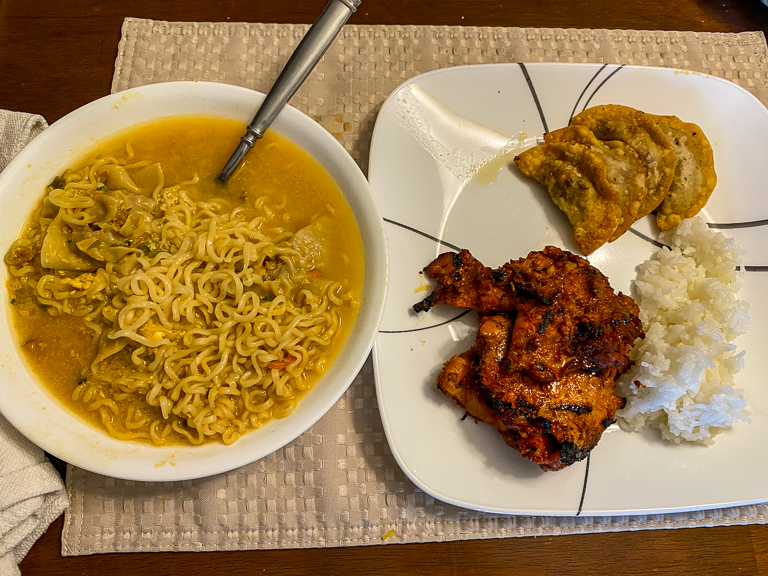 The chicken turned out delicious! 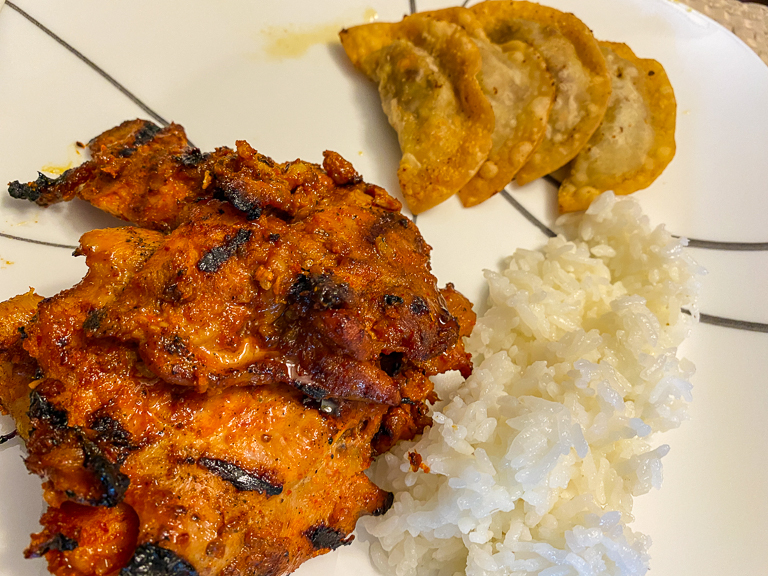 And the wontons are a big hit. 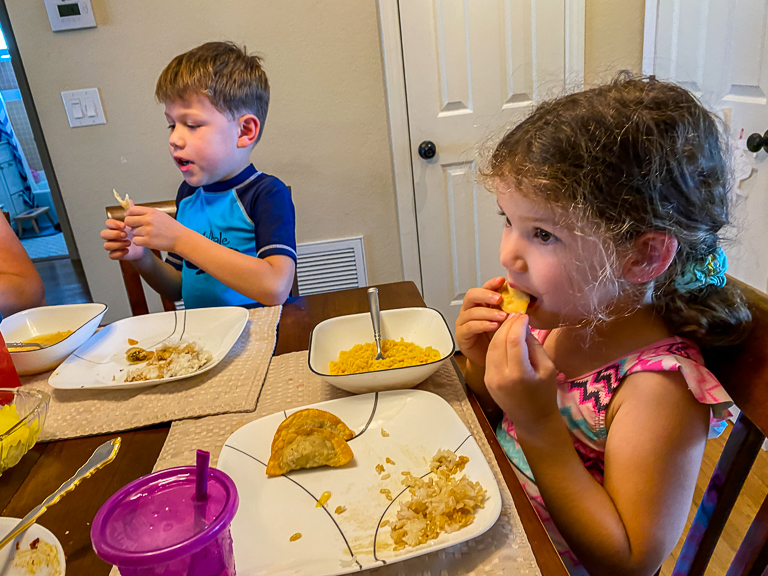 Both kids finished off all their ramen noodles. 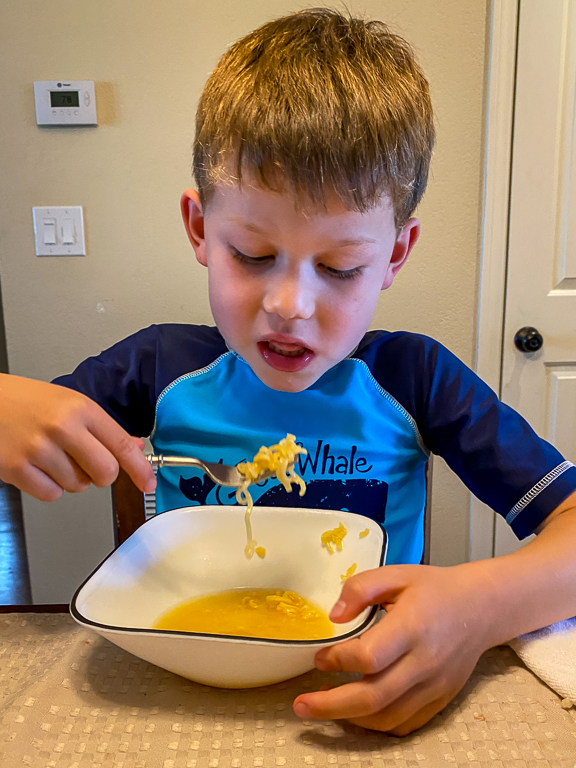 Richard cleaned his plate, and then went back for a few more things. 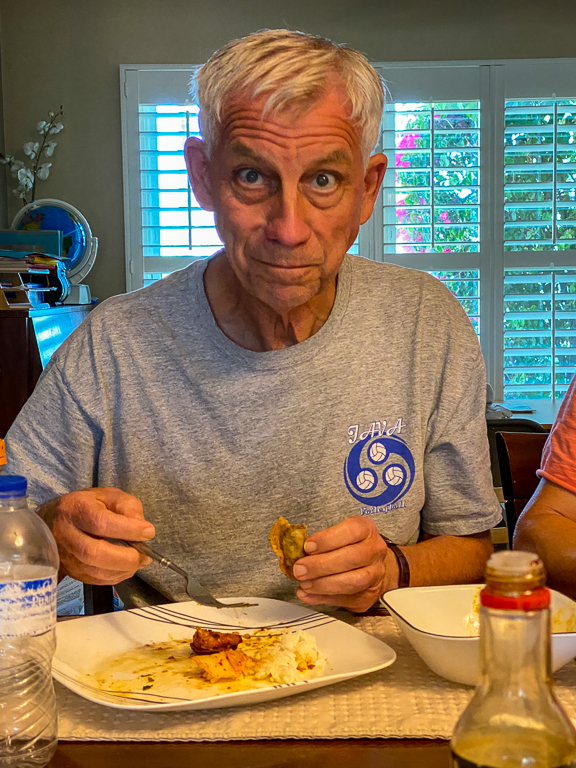 We've got to finish off this meat. It's too tasty to leave for later. 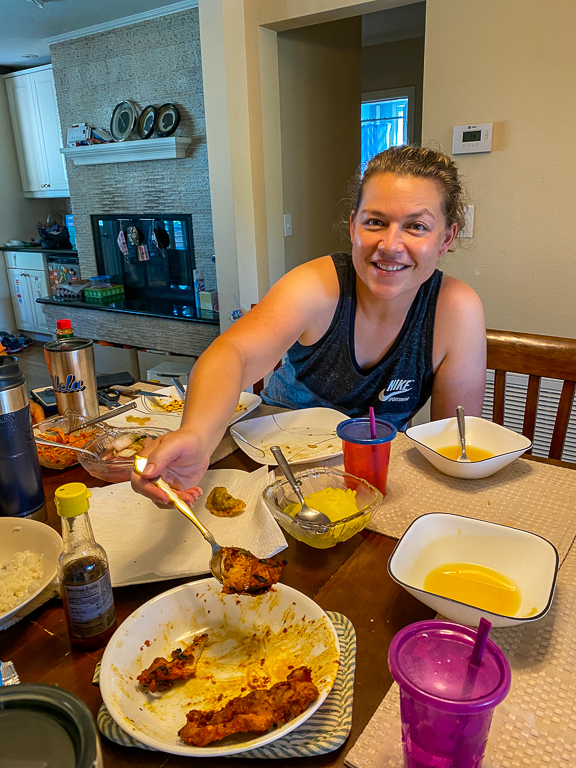 And besides the banchan side dishes, we cleaned out everything! Yum! 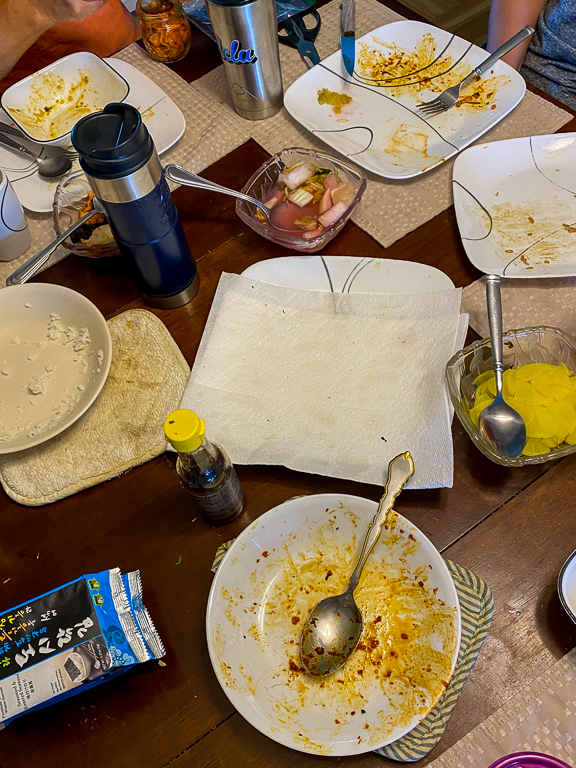