There's a snack that Theresa and I often buy that is a bit of a guilty pleasure. The Whisps company makes a delicious Parmesan Crisp that is super easy to eat way too many of. The hardest part to deal with for us though is the price-tag. It's $9.99 for a 9.5oz bag ($1.05 per ounce) if you buy them from Costco. Target has a smaller bag but it's $1.88 per ounce. This snack certainly isn't cheap.
Obviously inspired from all our make at home things, Theresa decided to attempt to make them at home! 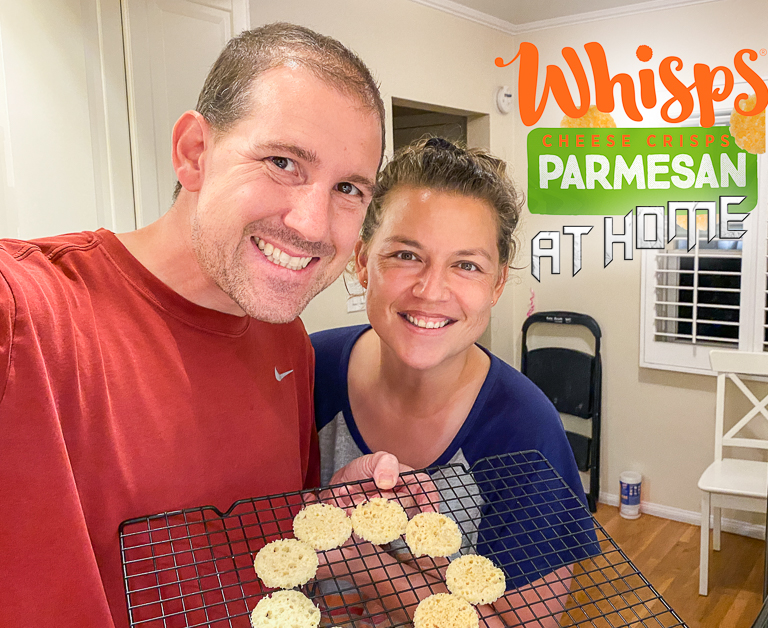 It starts with a block of parmesan cheese. Easy enough to get from the warehouse store for $6 per pound. 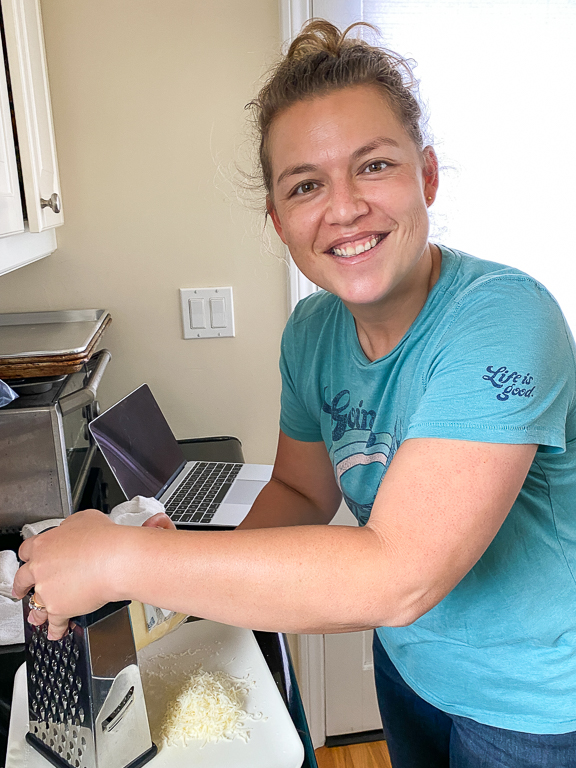 Theresa took our grater and shredded a bit on the finest level. 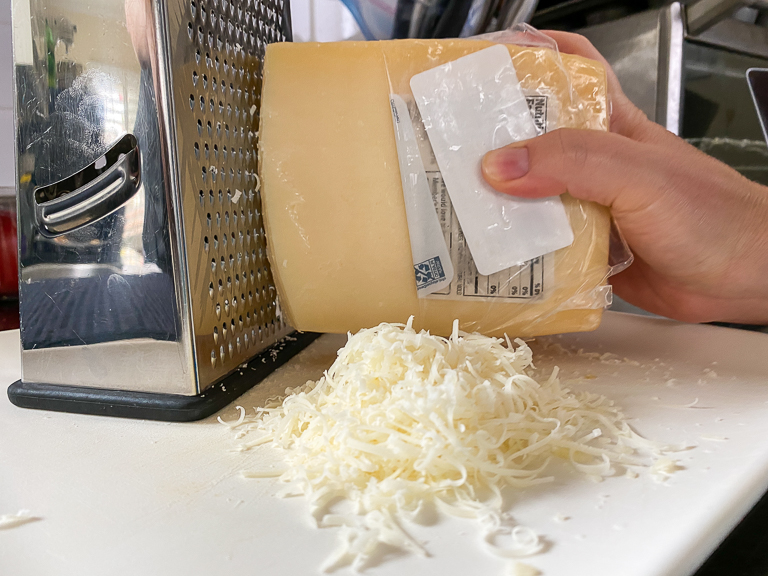 Using a muffin tin, she portioned out a bit of it into each cup. 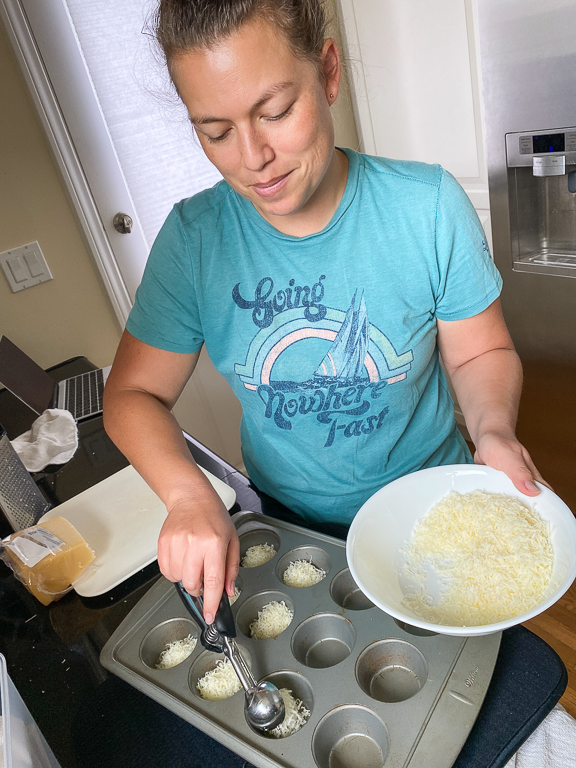 After a bit of time in the oven, the cheese had all melted! 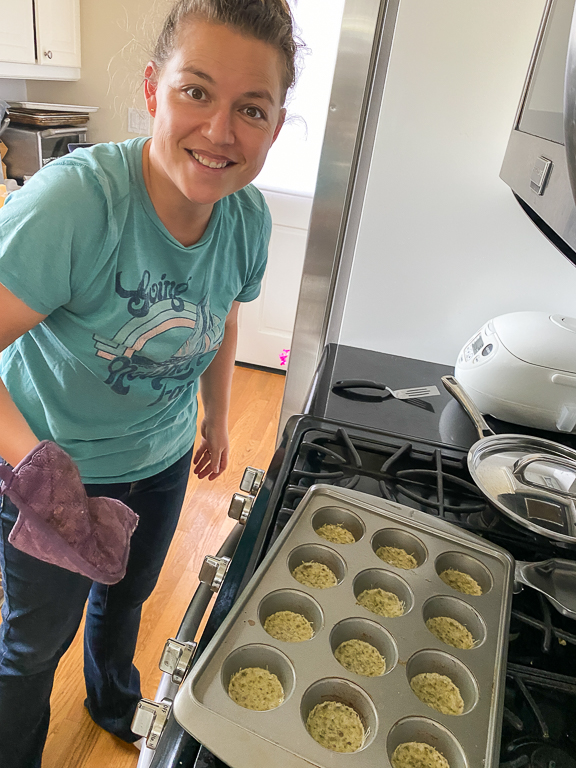 Melted a bit too well actually. We'd hoped the oil would keep them from sticking to the bottom of the pan. No such luck. These had to be chipped out. Another plan is in order. 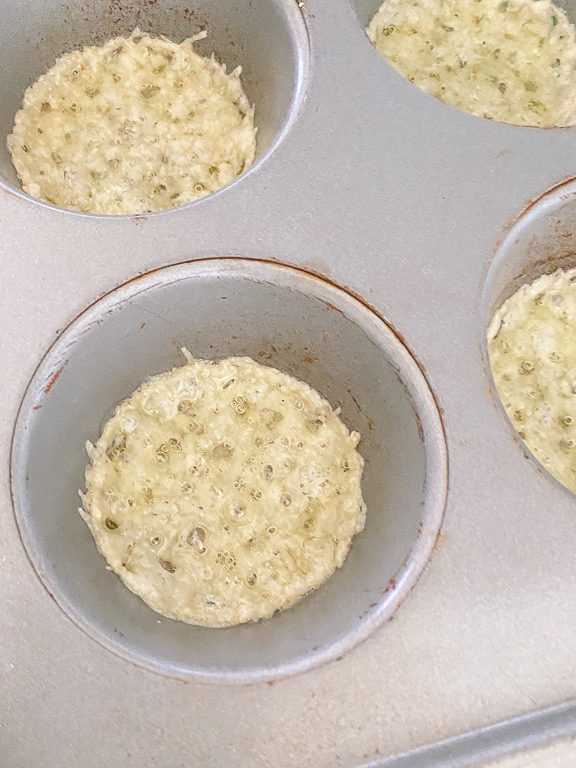 How about another attempt. This time without the muffin tin, but directly on a silicone baking mat. 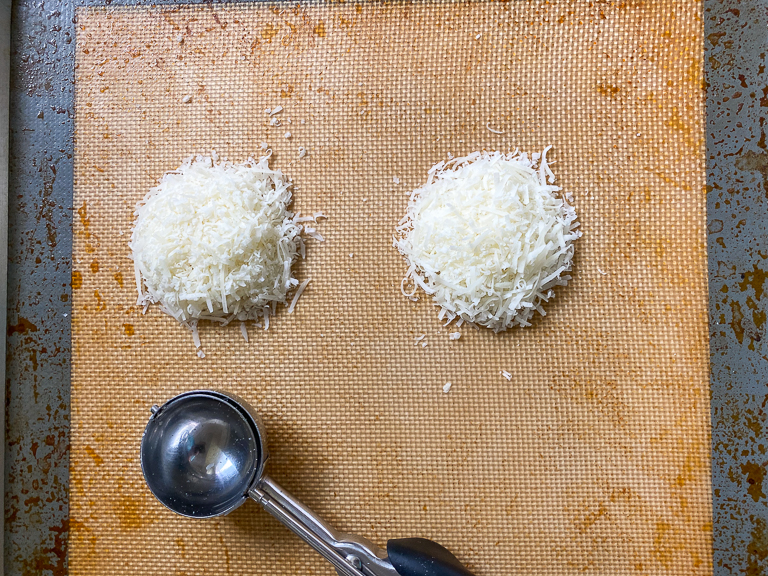 These are better. The didn't stick, but they're spread out a bit more than we'd hoped for. Also they're not quite the texture of Whisps. Whisps are light and airy. There's other parmesan crisp versions that are more dense and thin like these, but everyone we've met likes the airy Whisps best. Better keep experimenting. 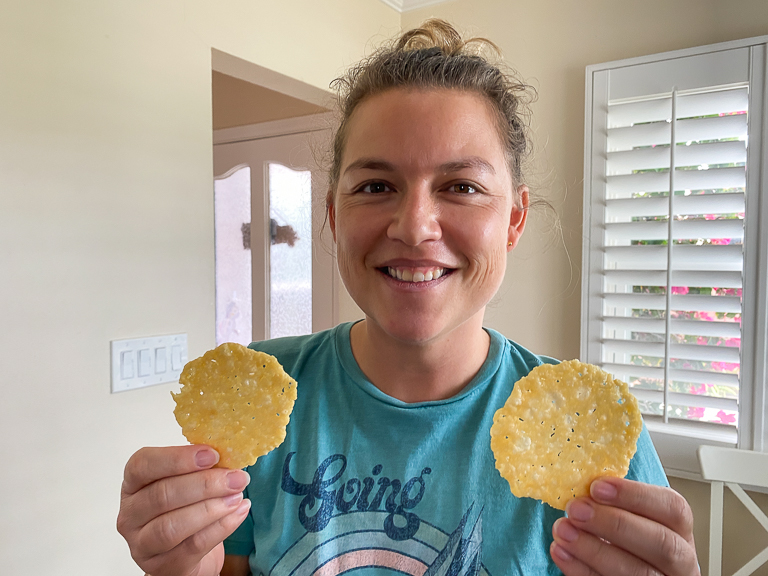 A few nights later and we've got some additional hardware. A new block of parmesan was procured from Sams Club. 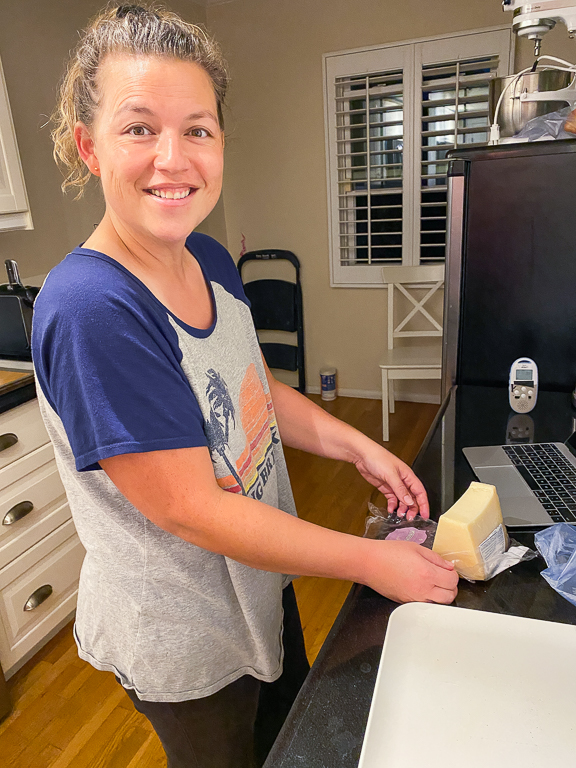 Instead of grating it by hand, I pulled out the food processor. 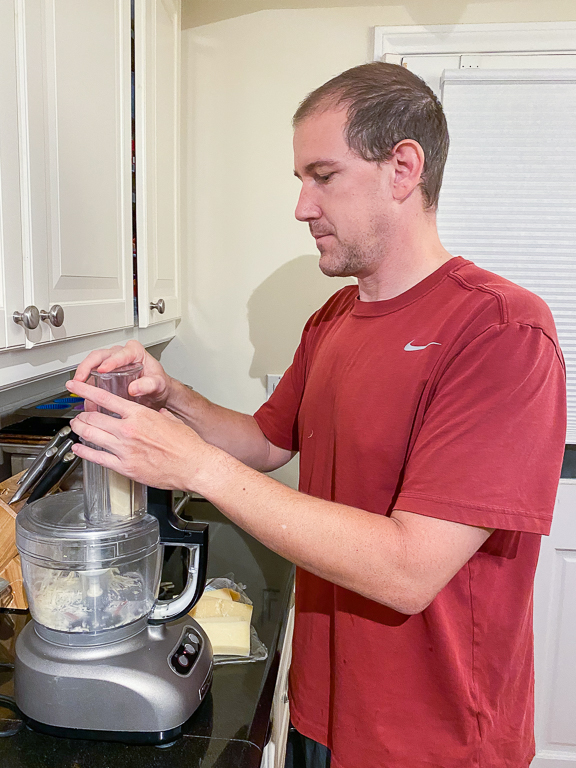 First a trip through the grater blade, and then pulsed to break up the longer pieces. That is so much quicker than doing it by hand. 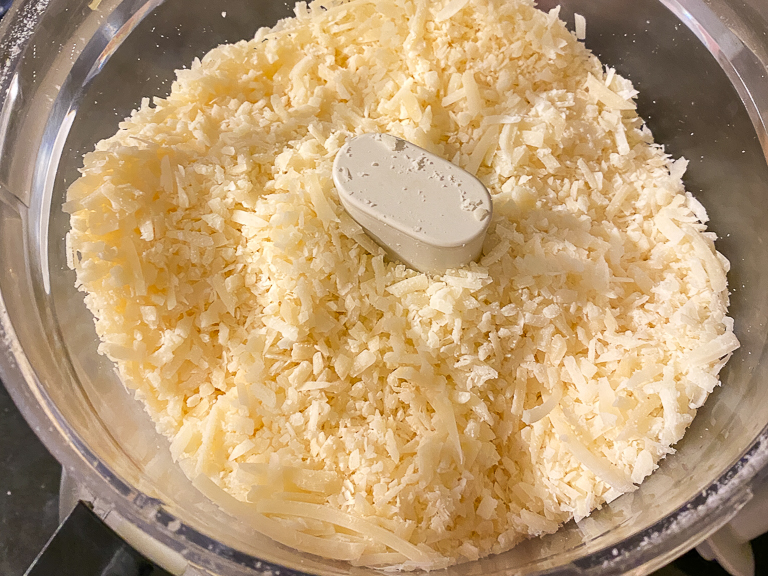 And here's the new hardware. Silicone baking cups, good up to 500F. It'll keep the cheese from spreading while it bakes. Since we're experimenting and because we want to be somewhat precise, we measured about 0.8 ounces into each cup. Probably too much, but it's going to melt down a bit. We'll see what happens. 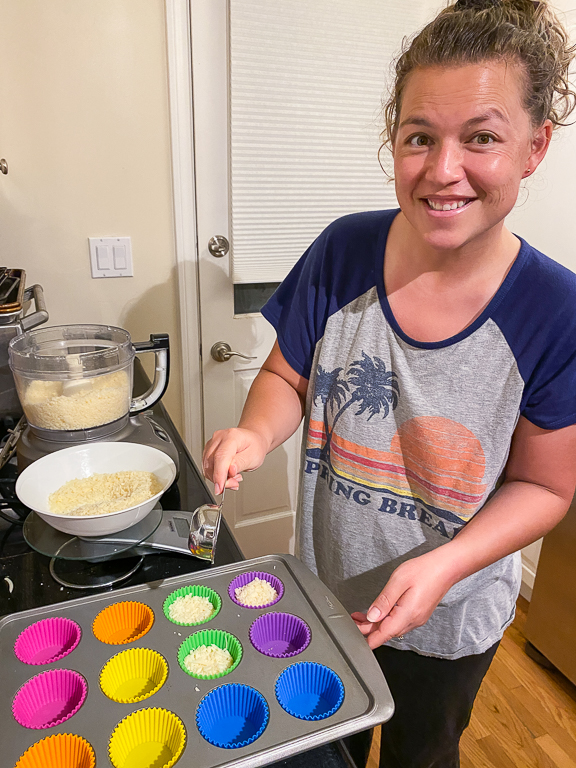 After 22 minutes in a 350F oven, everything was bubbly. We're guessing they're done. 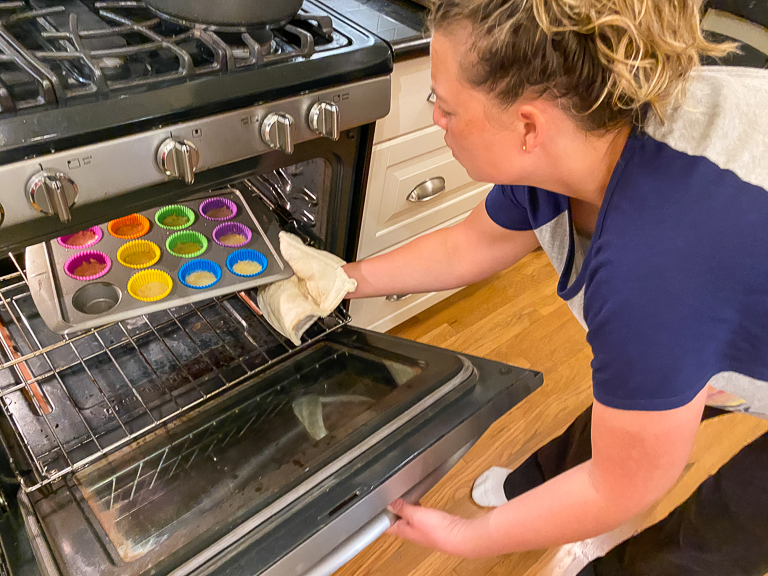 The result was... not quite what we were looking for. The outside edges are cooked. The middle is underdone. And everything is way too dense. 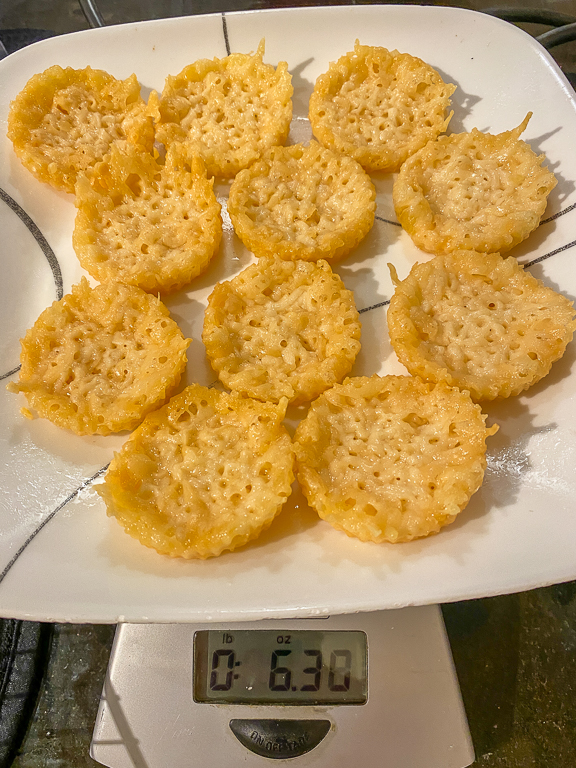 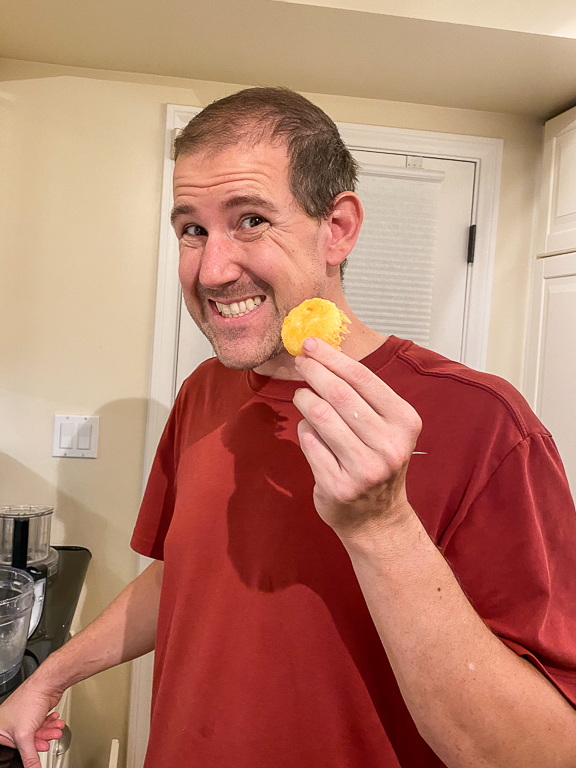 Grr. I can't actually bite through this puck. It's too dense and too tough to get through. I've got another idea. 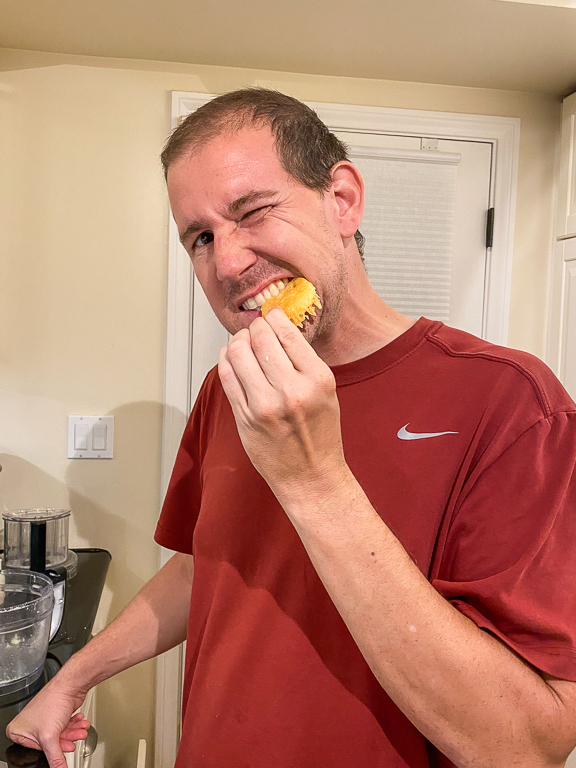 Theresa was laughing at me, saying I reminded her of Wayne from Prep and Landing as he's trying to bite into a stale Christmas cookie. 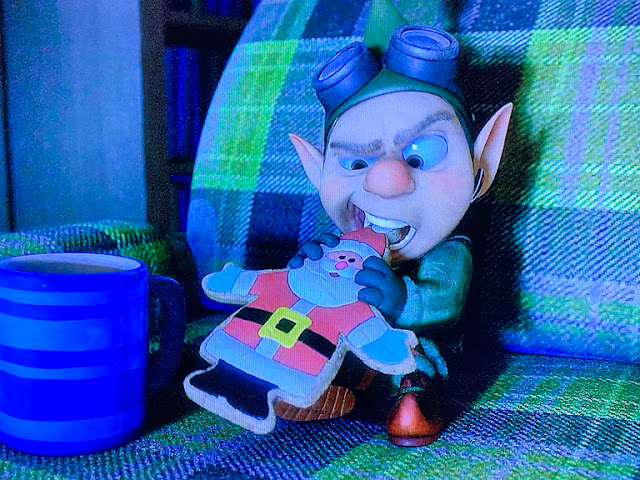 After verifying these silicone cups are okay for the microwave, I filled up one with 0.8 ounces of cheese and let it go for 60 seconds. No idea how long it should go for, but we're experimenting. 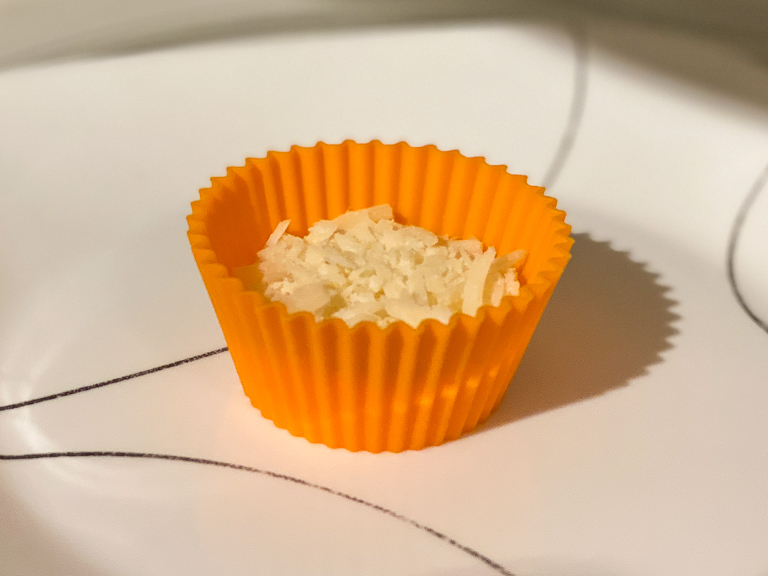 After 60 seconds this was what I saw right after I opened the microwave door. All the oil has bubbled up. I think that's actually a good sign. 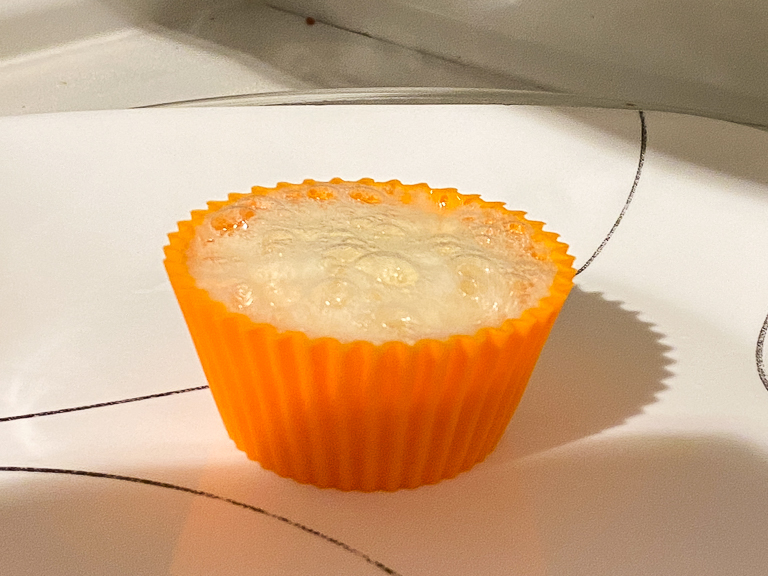 After letting it cool down, this was the result. 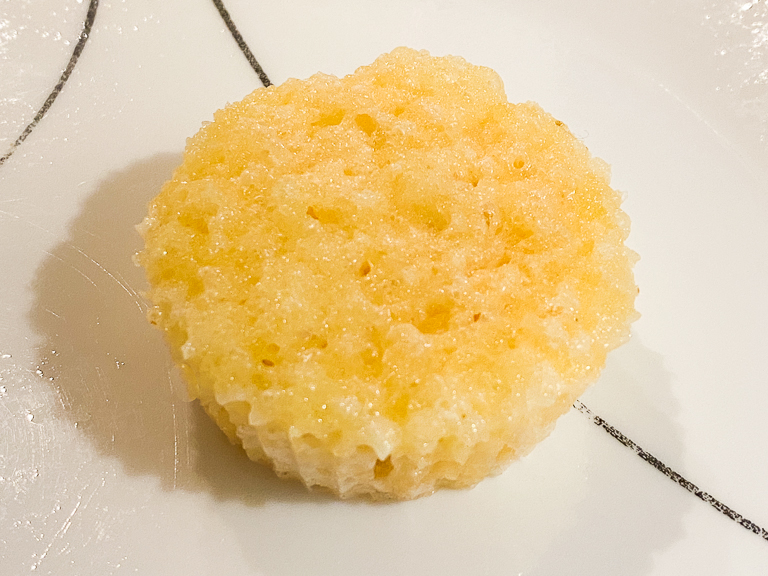 Microwaved on the left. Baked on the right. Both of them started with 0.8 ounces of cheese. Now you tell me which one looks lighter and airier.

And as far as being greasy, the baked version has a lot of oil leftover. Perhaps it could go longer, but the edges are already cooked. I think the microwave is the clear winner here. Time to experiment further. 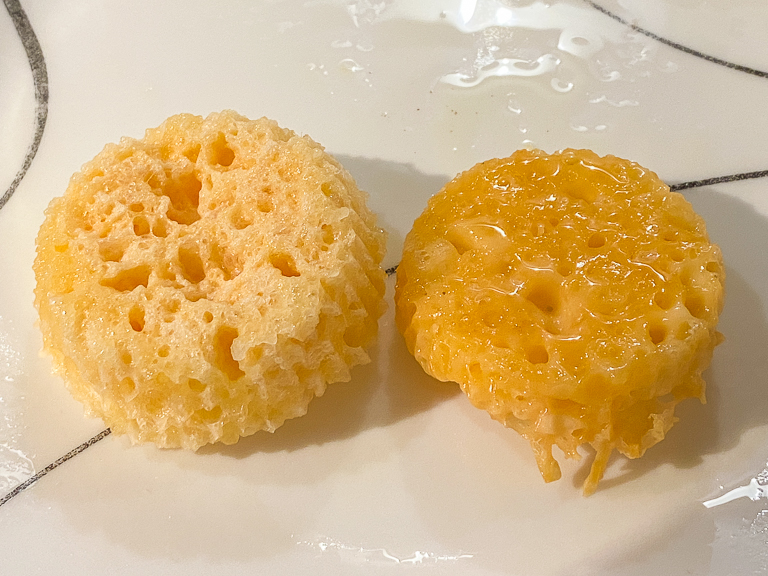 All of them were tasty to Theresa and I, and they're all nice and crisp, but I'm trying to get the thickness right. 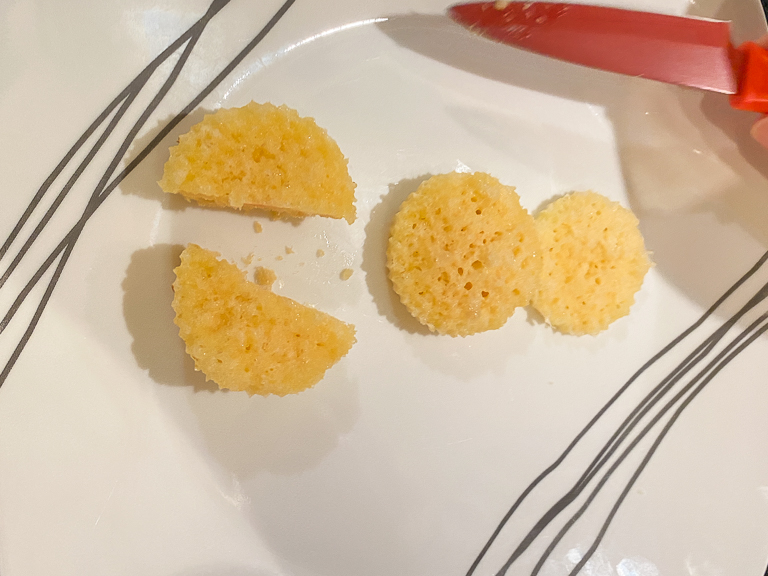 The texture is perfect! Look at those airy holes. I know Whisps website says they're baked, but the microwave has done the best job duplicating the texture at home. Now there's just the matter of cooking time. 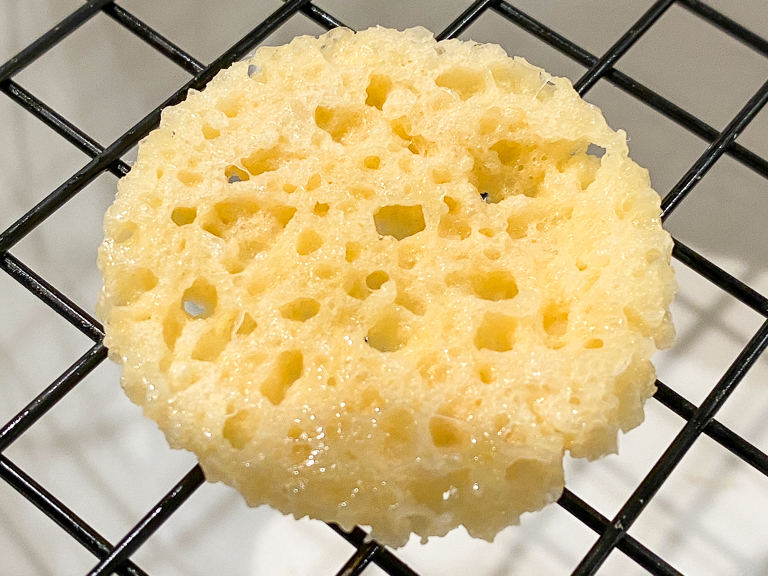 I thought a good experiment would be to test the optimal time for the microwave. Come to find out, it definitely makes a difference. All of these are 0.2 ounces. The middle cup shows 0.2 ounces of grated parmesan.
At 20 seconds, things have started to melt, but it's not enough. The oils haven't completely bubbled and it's a bit dense.
At 30 seconds, the texture is starting to be correct, however the flavor isn't quite there. It's parmesan, but it's bland.
Once you get into the 35+ second range, it's starting to actually toast the cheese and start to develop a more complex flavor. From there it's probably more of a personal preference. 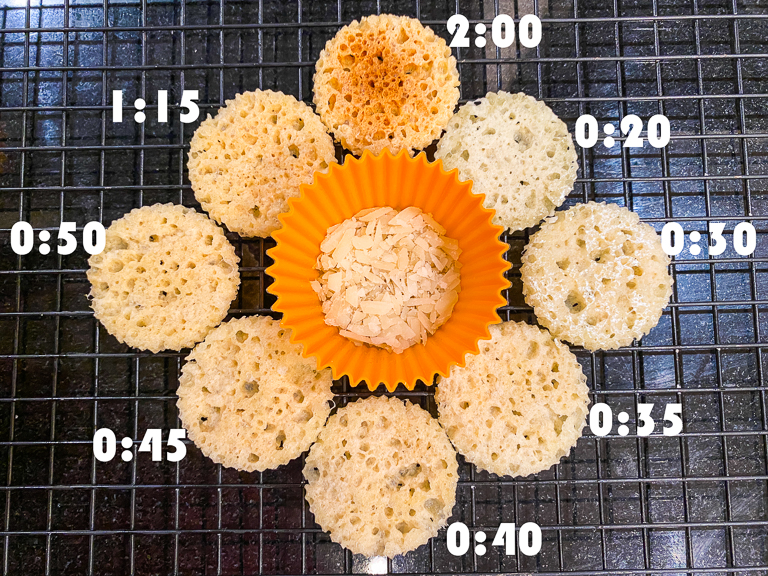 I liked it in the 35-40 second range. Theresa liked it a little bit more toasty.


In the end for this experiment, I made 9 pucks. They started at 0.2 each, so approximately 1.8 ounces. After various microwave times, these finished at 1.2 ounces, meaning they've lots a third of their weight.
And so the big question is, can we beat the cheapest Whisps cost of $1.05 per ounce? Doing a little math, let's see. Sixteen ounces costs $6. It'll bake down to 10.7 ounces. That works out to $0.56 per ounce, or about half the cheapest price you can buy them for at warehouse prices. 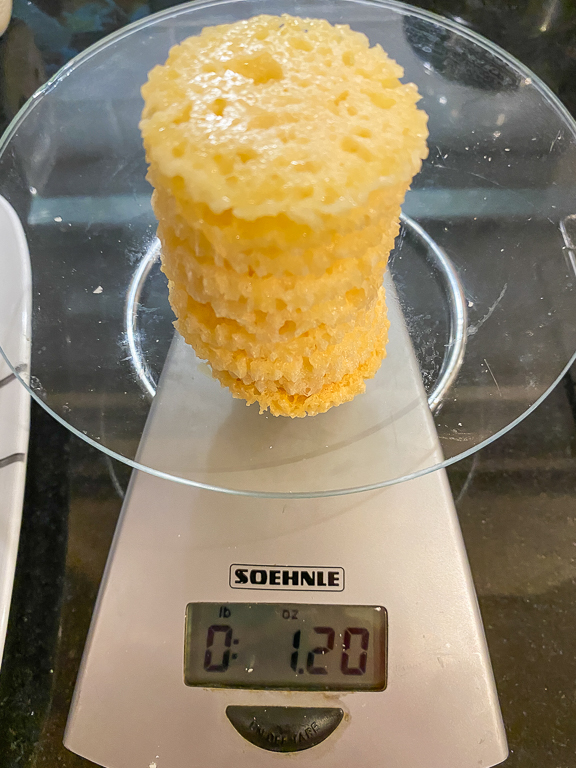 I think I've got the thickness correct, but just because I was curious, I spread a layer of cheese about as thin as I dared. After 30 seconds in the microwave it came out almost as thin as a potato chip. It's super fragile, so I can see why they don't sell them this thin, but it's got a nice texture. One that Theresa actually prefers. 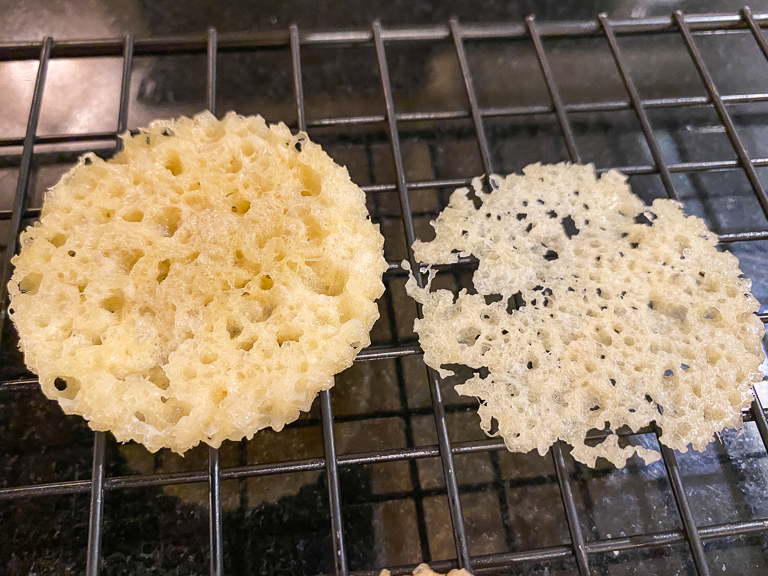 Theresa, that was a great idea for a home experiment! It was fun figuring out the different ways these could turn out! 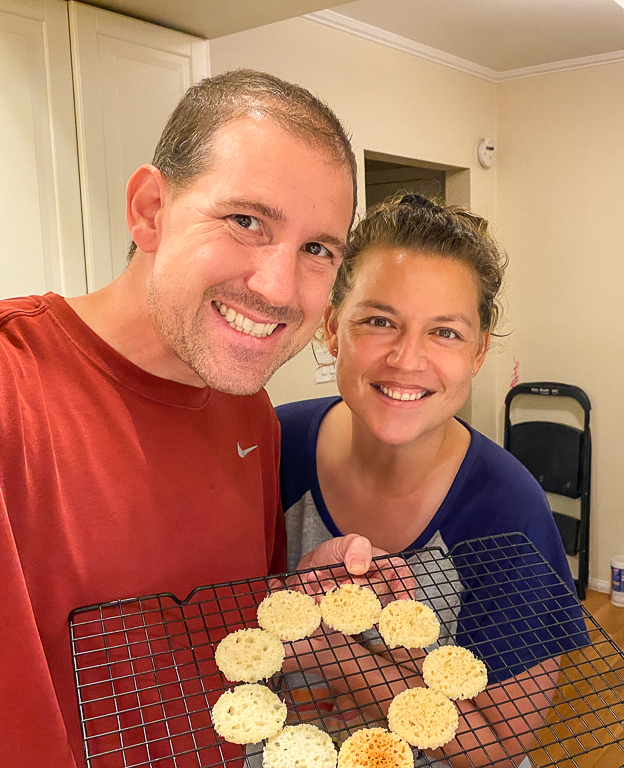