It's Sunday night, so you know what that means. It's time to continue our Pizza at Home series and try a new style of Pizza! Tonight we're making pizza Detroit Style! 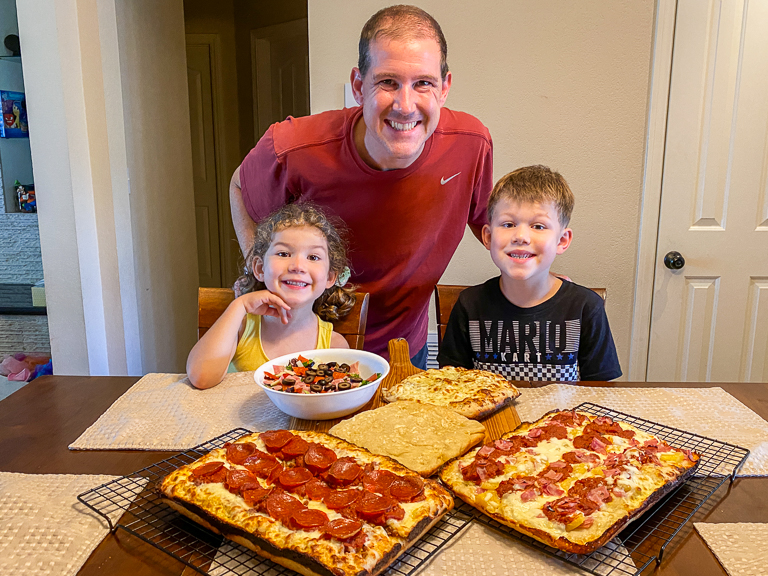 Not sure what Detroit Style pizza is? Whenever we visit my family in Michigan, we usually will get pizza from a place called Jet's Pizza. Here's what it looks like. It's what you might recognize as Pan Pizza. And we'll usually get an order of cheese sticks to go with it. I think I'll make them as a side to go with our pizza tonight. 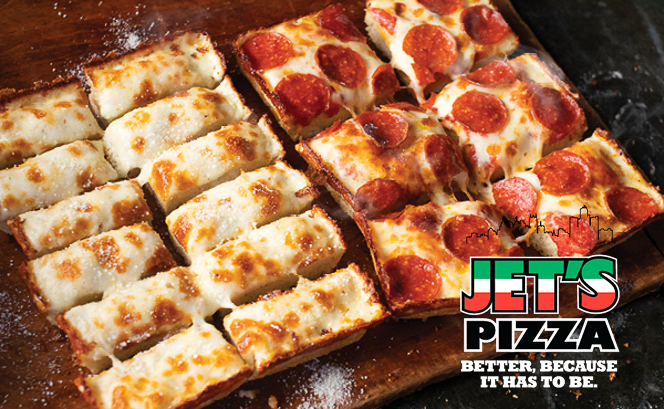 For the dough, I'm using this recipe from foodnetwork.com for Detroit-Style pizza. It's a super easy dough to make. You don't even need a stand mixer. In a food processor you mix yeast, sugar, flour, salt, and water. Just mix it until it comes together in a ball. Barely any kneading. Set it in a bowl for 2 hours to rise. See! Super easy! I made 3 batches of dough. 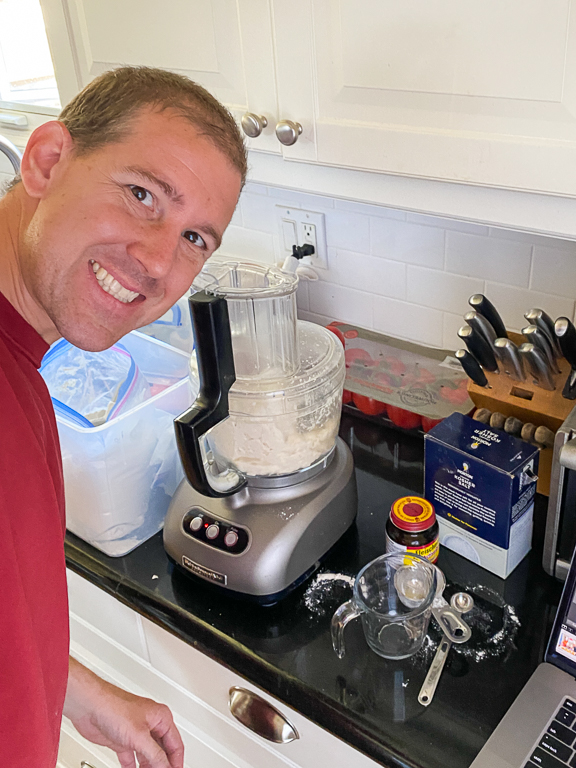 After 2 hours, I cranked up the oven to 550F and then I oiled up a few pans. The dough has risen nicely. 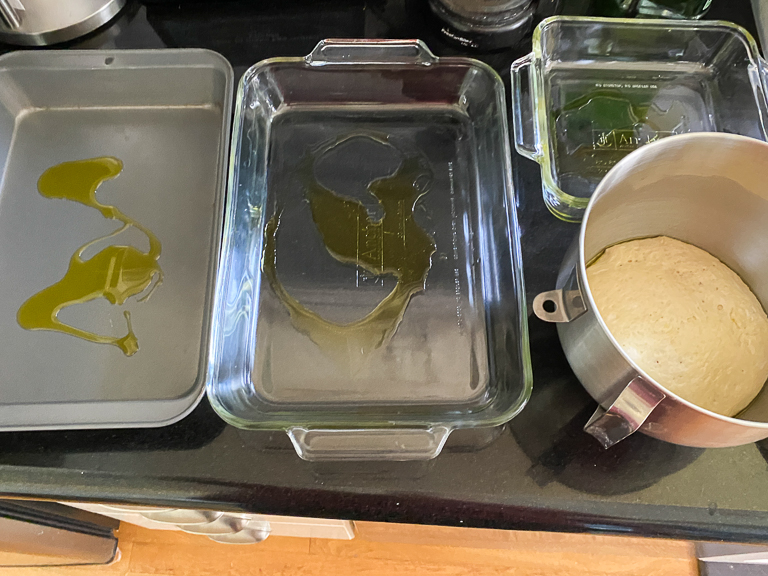 In two of the larger pans, I spread out the dough for pizza. For the other dough, I split it in half and placed it into the smaller pans. 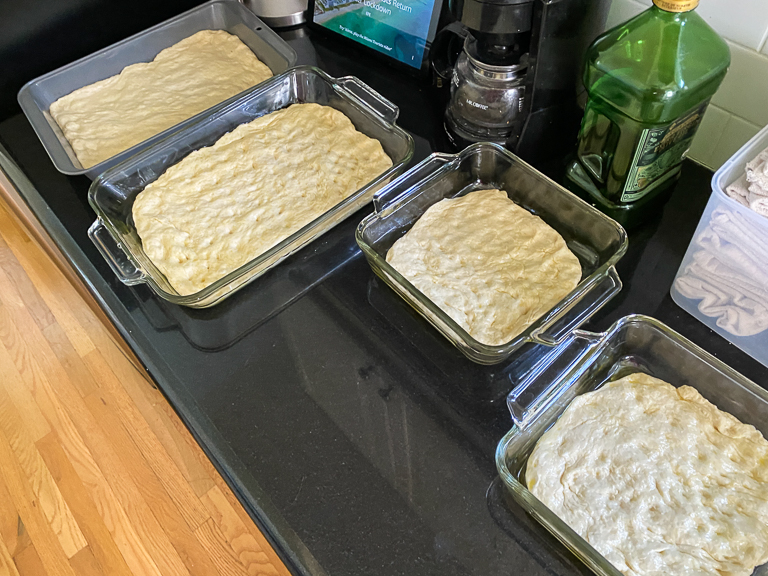 Detroit style pizza is assembled a little differently than you might be used to. First layer is the dough. Next the toppings go down. For this one, I'm making a meat-lovers pizza with pepperoni, ham, and sausage. 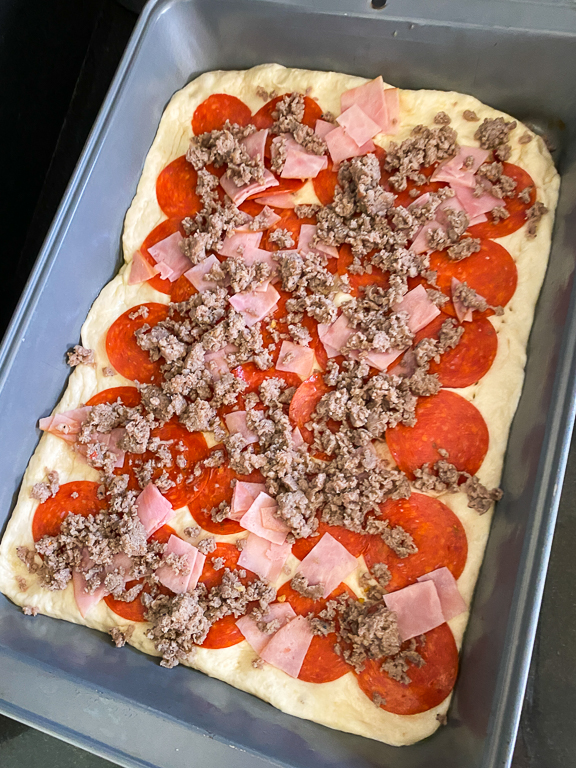 Next is the cheese layer. Mozzarella is spread over the top, making sure to get over to the edges. We're hoping for a crunchy cheese crust ringing the top. 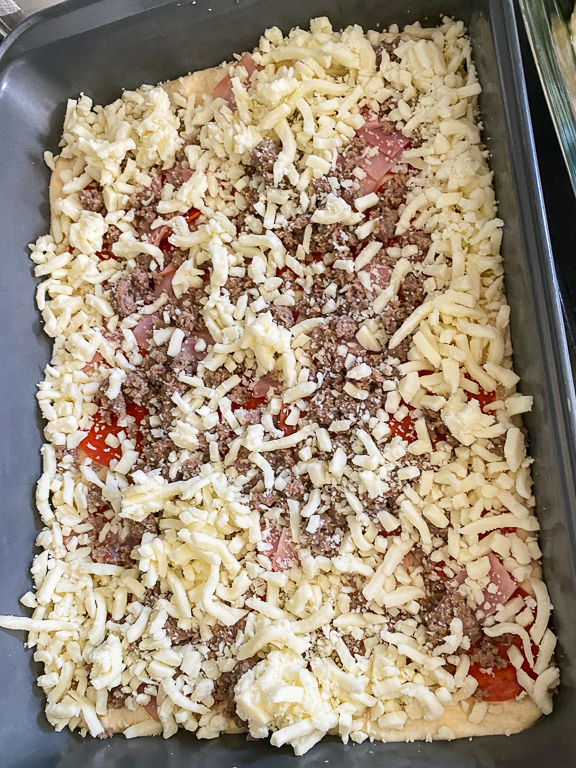 Finally the sauce goes down. Not spread evenly, but three strips of sauce going down the pizza. 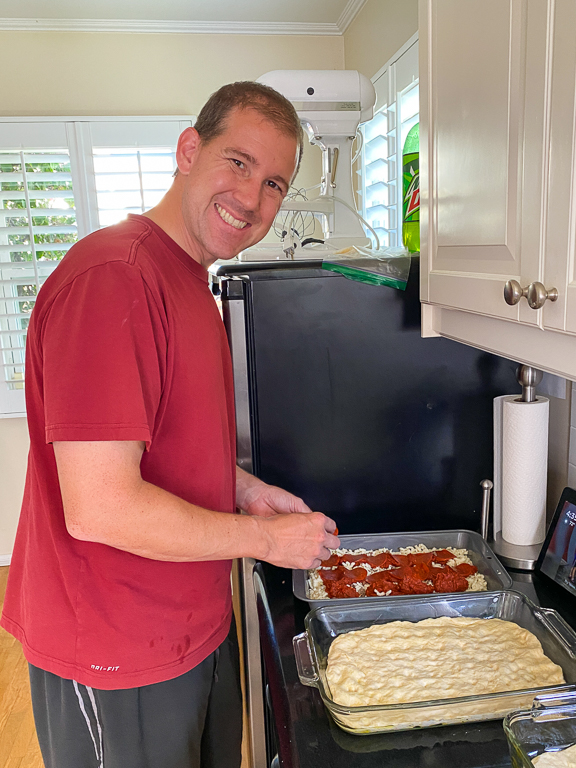 Then a few more toppings go on top and they're ready for the oven. In addition to the meat-lovers pizza, I made a second one with ham and pineapple. 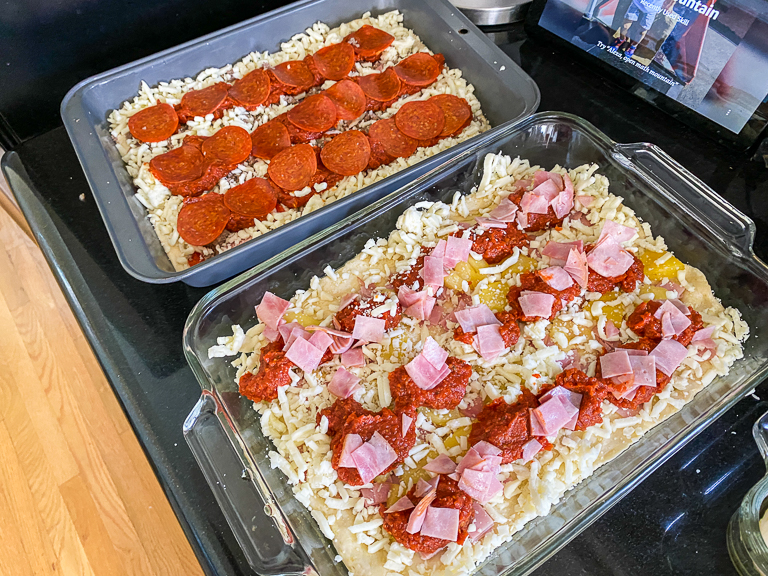 For the cheese bread, I first put a light layer of Italian seasoning, topped it with mozzarella and parmesan, and then drizzled olive oil on top.
And with the last one, I made regular breadsticks by brushing the tops with butter and then sprinkling parmesan on top. 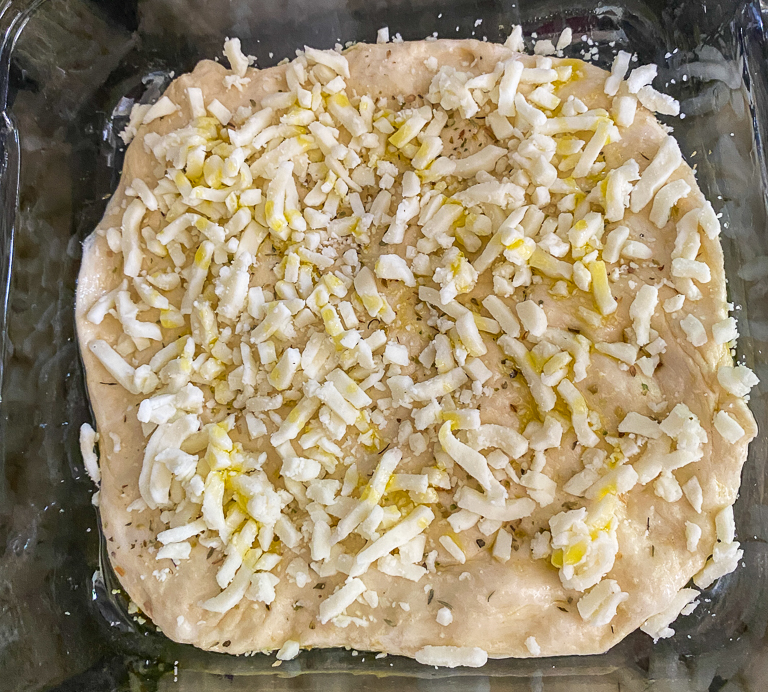 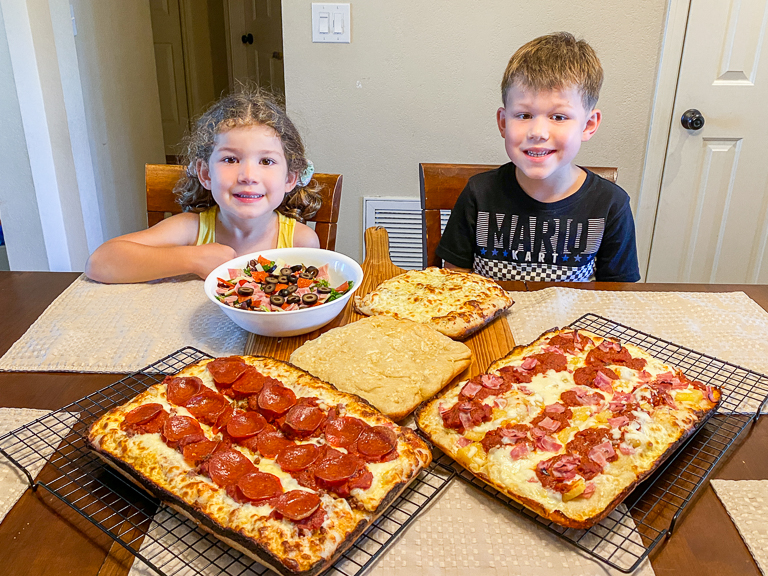 Check out that crunchy cheese crust. I think this baked up perfectly in the glass pan. 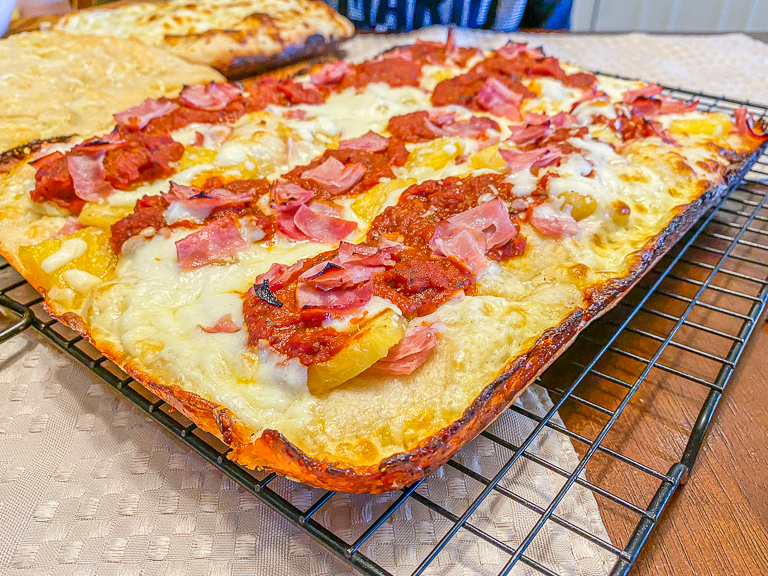 Mmm, and look at that cheese bread. That's pretty perfect. 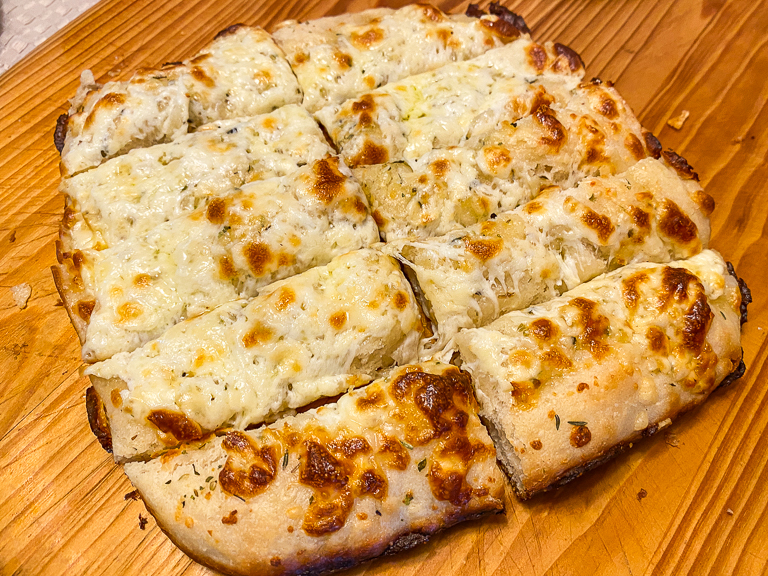 Richard and Chi thought this was the best pizza we've made at home yet. 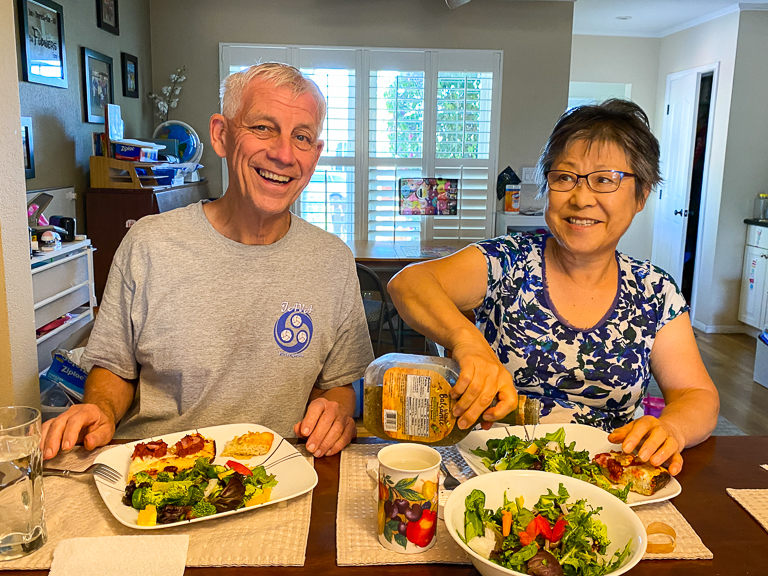 And the kids thought it was really good pizza too. They both wanted the meat-lovers pizza with lots of pepperonis on it. 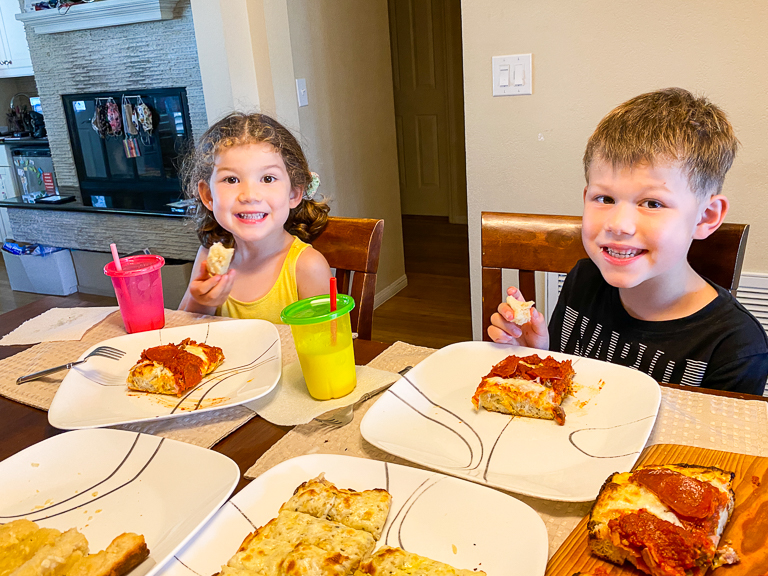 Theresa thought it was good, but a little too much sauce. She loves pizza with lots of bread, tasty toppings, and very little sauce. 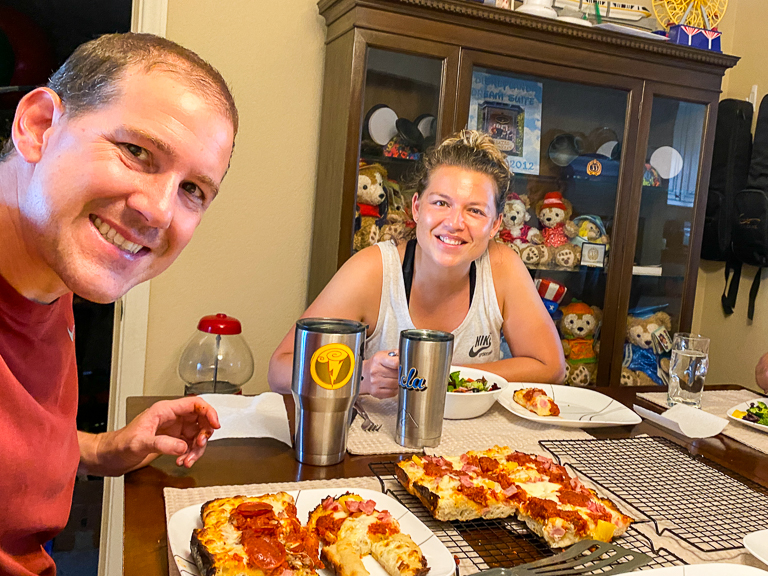 And just in case you think it's all junk food, Alli thought the salad was tasty too. 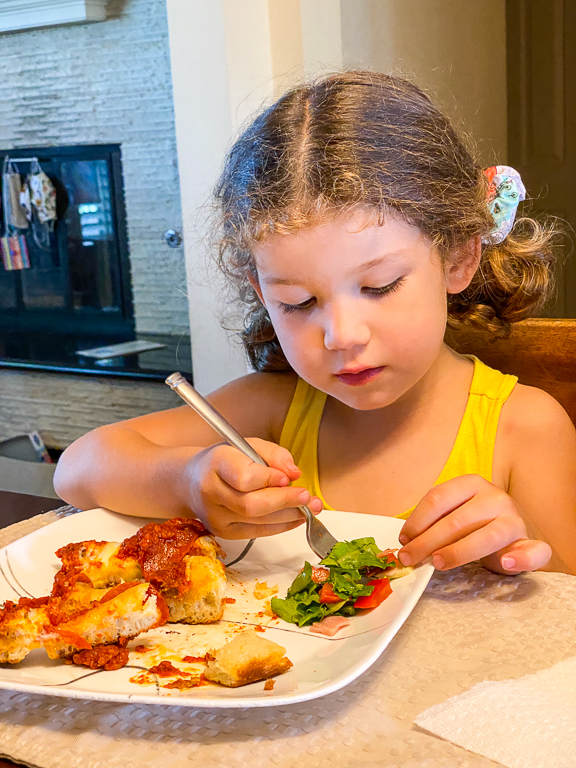