Are you sure? Have you ever tried them all at once?

As a special birthday present from their aunt and uncle, Alli and Ian got a big bag with 20 different candy bars in it! Let's have the Ultimate Chocolate Candy Bar taste test! 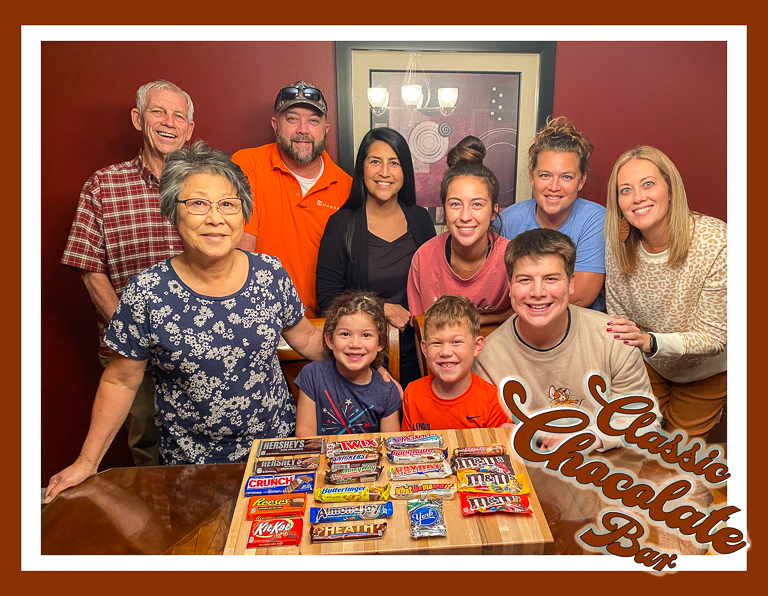 Theresa and I went through a list of all the classic candy bars and chose the most popular. Popularity was also determined by if we could find it easily at CVS, Meijer, and Walmart. 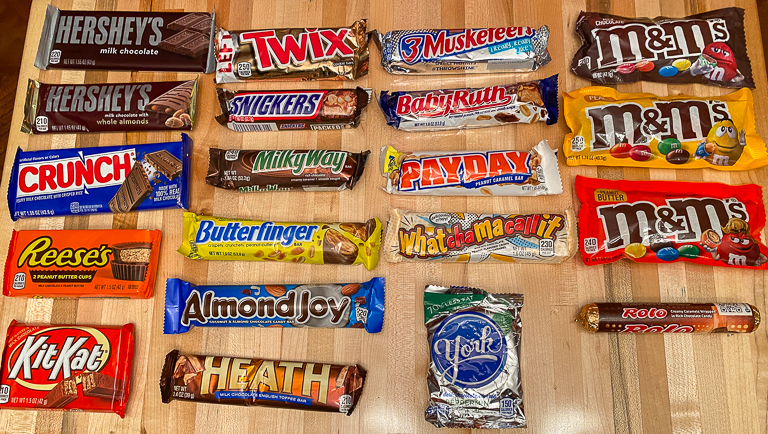 They are excited to share their birthday gift with everyone else! 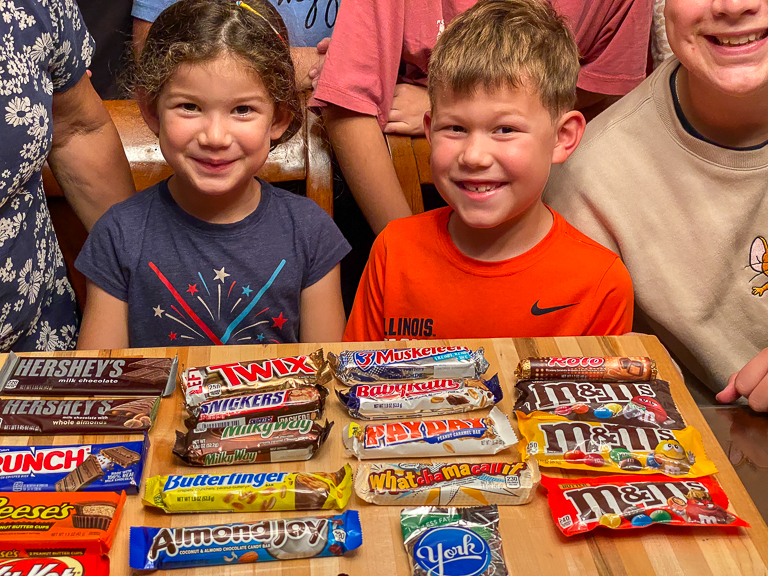 Everyone gathered in the dining room and stood around the table while I cut the different candy bars into pieces. It would be something to EAT all 20 candy bars, but we're just going for a taste. 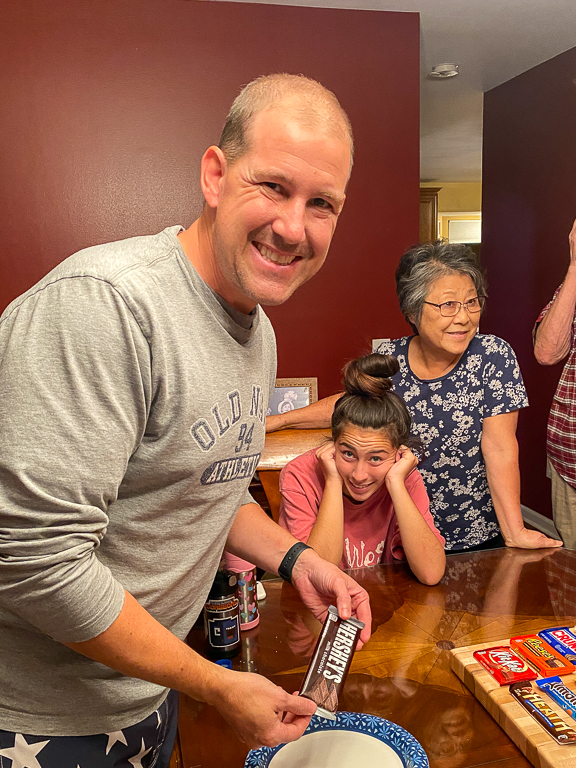 There are four different columns of candies. We'll vote on our favorites from each column, and then pick a final favorite at the end.
In our first comparison, we'll be trying the Original Hershey's Bar (1900), Hershey's with Almonds (1908), Crunch (1938), Reese's (1928), and Kit Kat (1935). There's so many good ones here! This is going to be a difficult taste test to choose a favorite from! 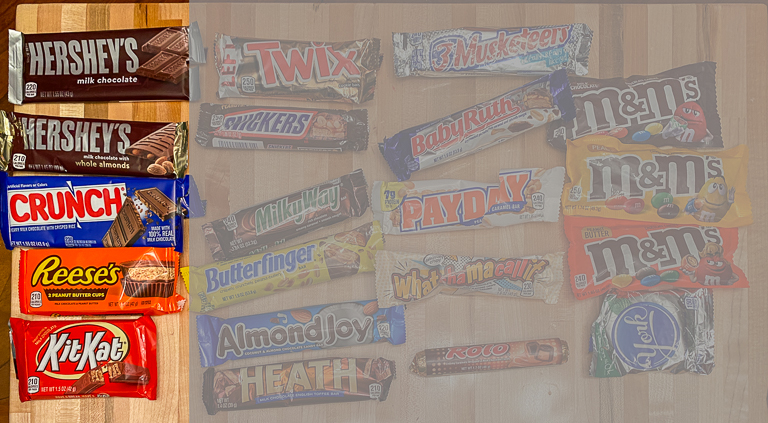 The original Hershey bar was just purchased just a couple days ago, but Rita and family commented that it didn't taste as "fresh" as the one we got directly from Hershey's Chocolate World in Hershey Pennsylvania. Amy likes to dip her Hershey's into Peanut Butter.
The Hershey's with Almonds seemed to have a different chocolate flavor than the original chocolate bar. It didn't look like too many almonds from the bottom. 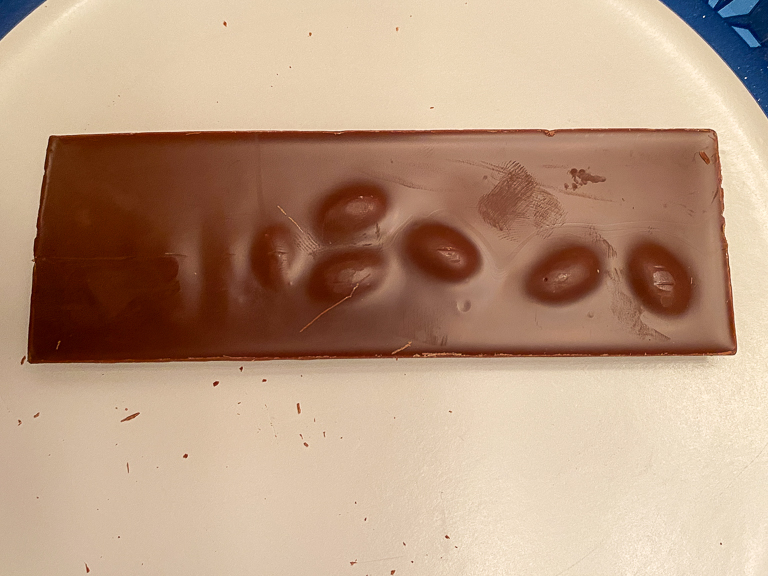 But there were plenty of almonds scattered throughout the bar, even though they were completely enrobed in chocolate.
Is Hershey's better with Almonds?
Tyler - Absolutely!
Aubrey - It's a million times better with Almonds.
There was agreement around the entire table. 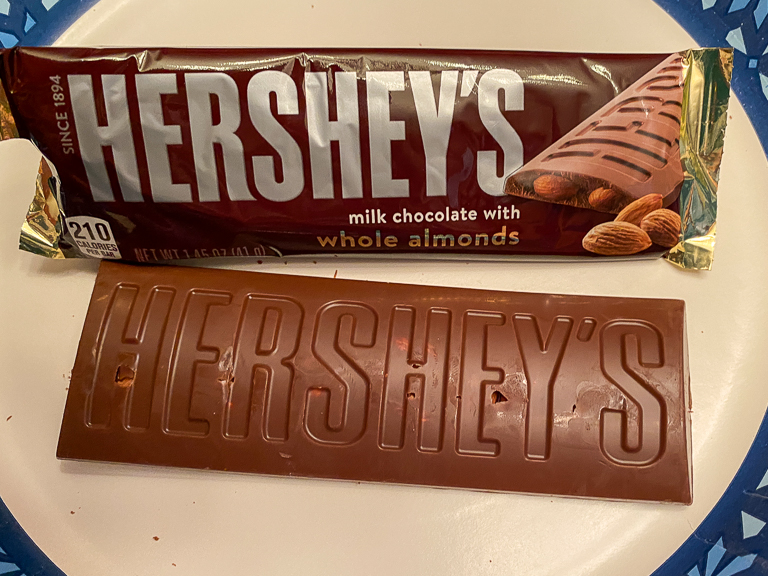 Admiring all the different candies that are left to try. 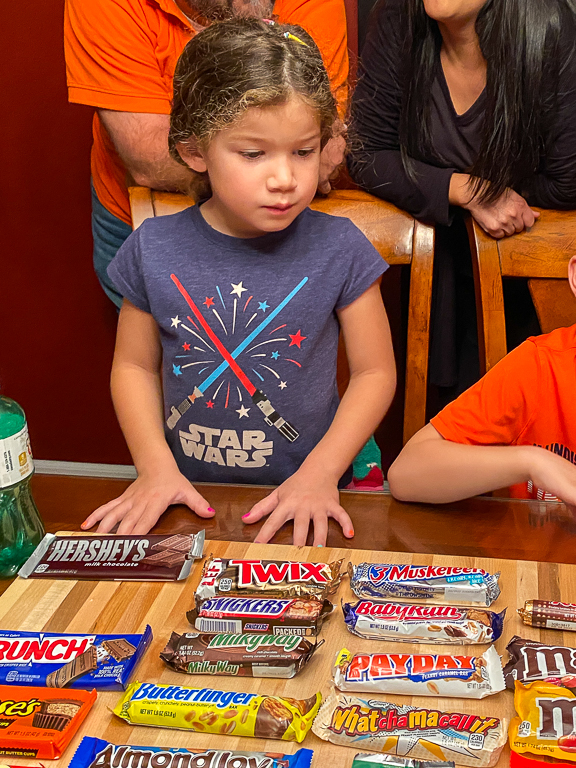 I was expecting a different shape, and I remember this being covered in foil before. Times changes I suppose. And I was surprised that I didn't like this as much as I was expecting. I thought I loved Crunch bars.
Aubrey - I used to like Crunch way more than I did now.
Amy thought the mini Crunch candy bars were better than this. 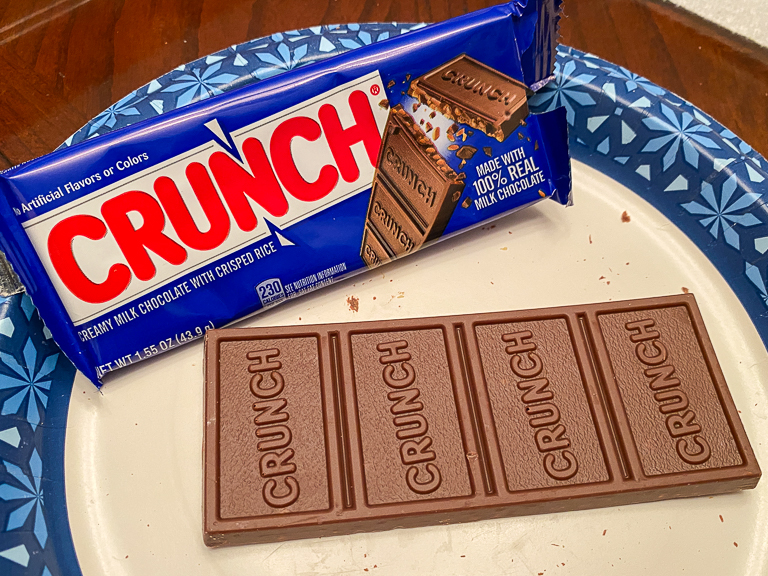 Here we go, this is the one I've been waiting for. Many of the people here were present for our 53 item Reese's taste test, and many of them still haven't gotten over it. Many aren't. I've ruined them on Reese's. Amy said we needed to have the White Chocolate Reese's Ghosts, but I think those are a little too specific for this taste test.
What are the favorites from Column 1?
Hershey's with Almonds - Aubrey, Richard, Theresa, Rita, Tyler, Jared
Hershey's - Alli, Ethan
Reese's - Joe, Amy
Kit Kat - Ian 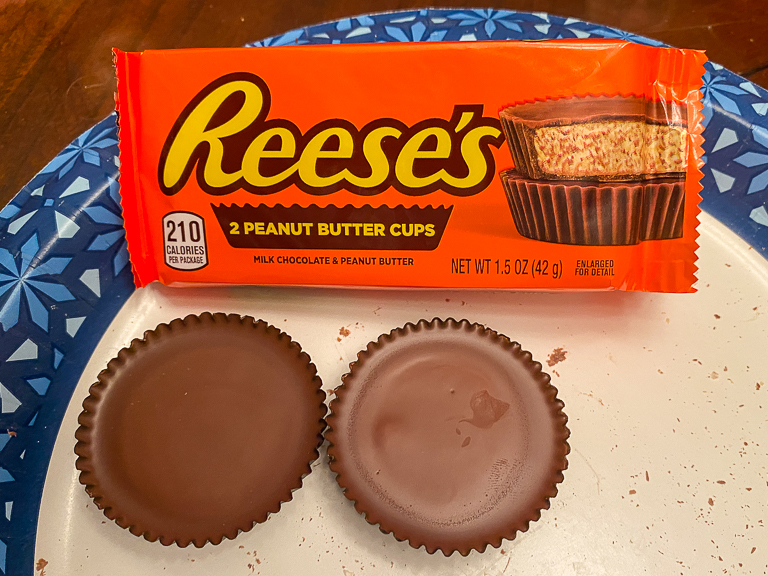 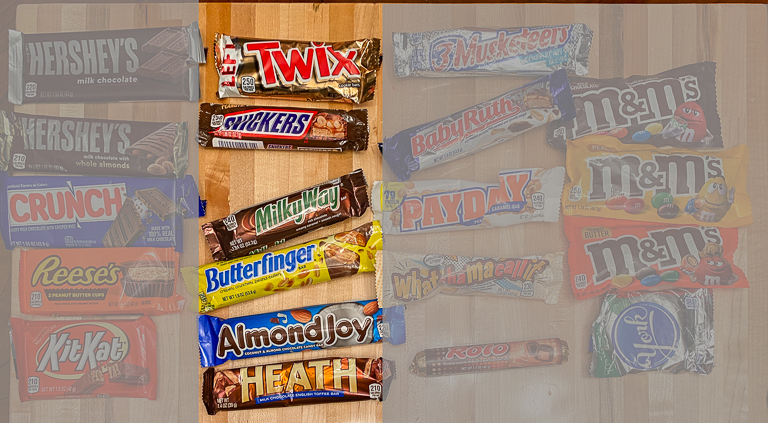 Ian doesn't believe that there's important differences in the Left Twix (the best Twix) and Right Twix (bleh).
Ian - They're both the same!
I don't think so.
Theresa suggested we set up a blind taste test between the two of them, but we all know that's just a wasted effort. Clearly Left Twix is superior. 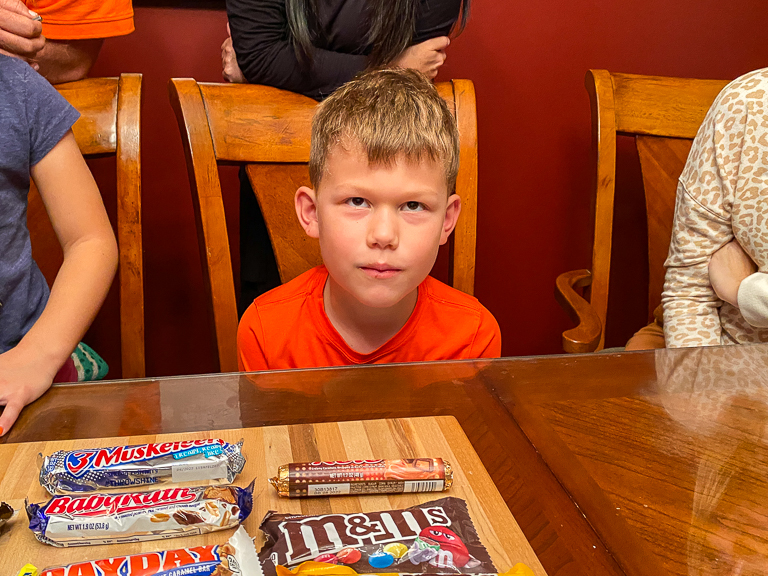 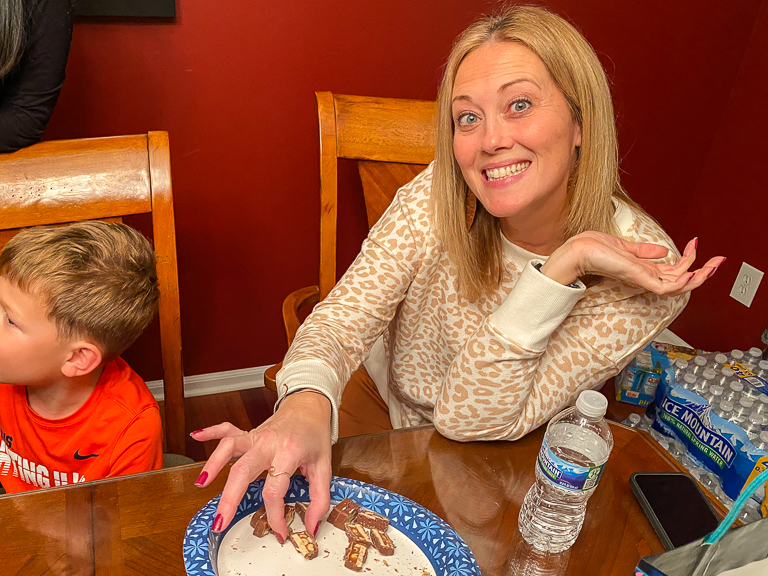 Aubrey - I hate Milky Ways.
Amy - I could totally leave that in the candy bowl.
The Crispety, Crunchety, Peanut-Buttery Butterfinger doesn't cut into pieces very well. The flakey layers shatter.
Theresa - I love that in ice cream! Mixed in with vanilla.
Amy said it reminded her of the Chick-O-Stick candy bar. It's been a long time since I've had one of those. 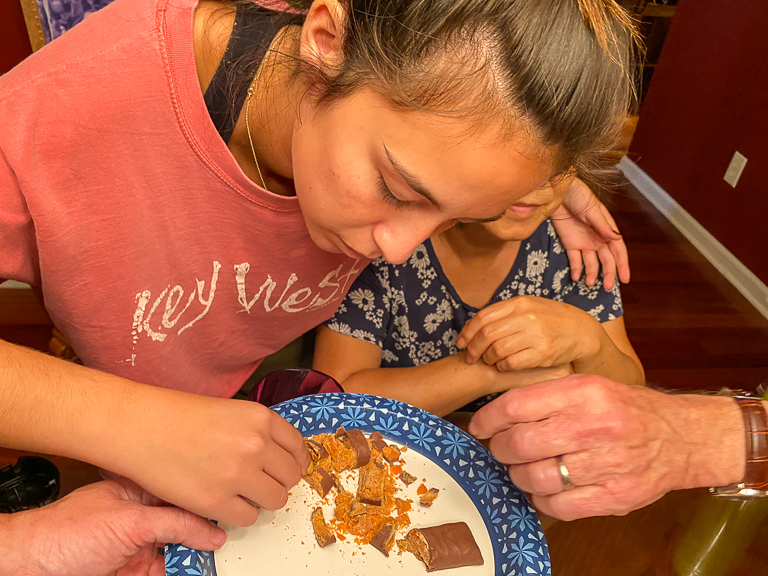 Everyone around here knows that Grammy is a big fan of Almond Joy. Ian collects all that he finds to give to her. Grammy chose the biggest piece.
Aubrey had a King Size Almond Joy for breakfast the other day. She loves them.
Amy - I'm just going to have to make myself try it because I don't like stringy coconut. 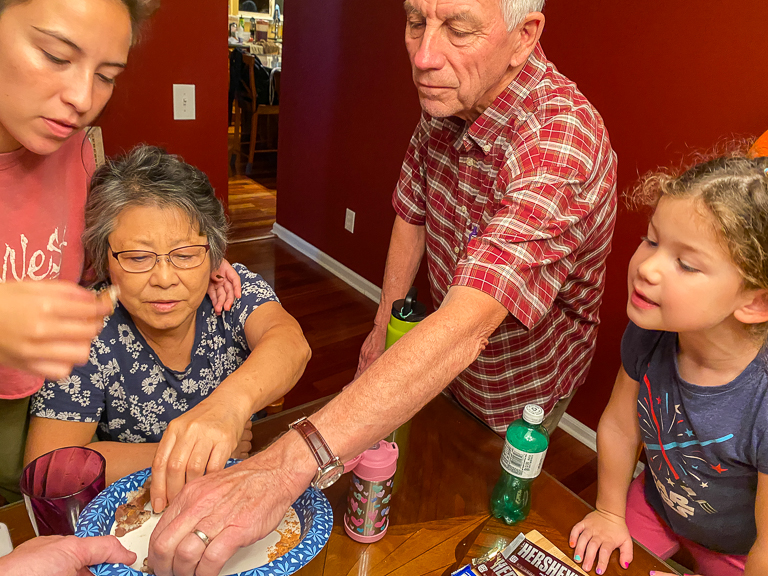 I think English Toffee is delicious, and so the Heath bar has always been a favorite of mine.
Amy - I like Heath in my ice cream too. Coffee ice cream and Heath is the best.
Favorites for this column are:
Heath - Joe, Rita, Theresa
Almond Joy - Chi, Aubrey (but also likes Twix), Ty
Snickers - Richard, Amy
Milky Way - Alli (but Snickers is really close), Jared 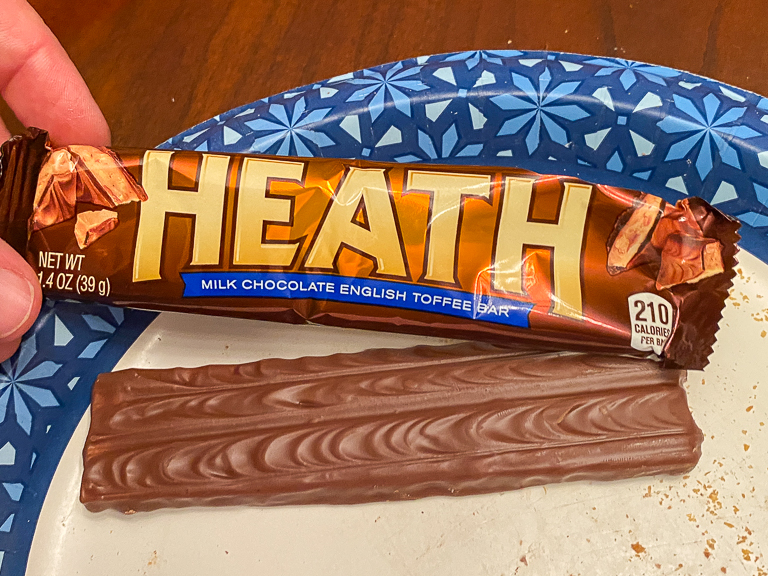 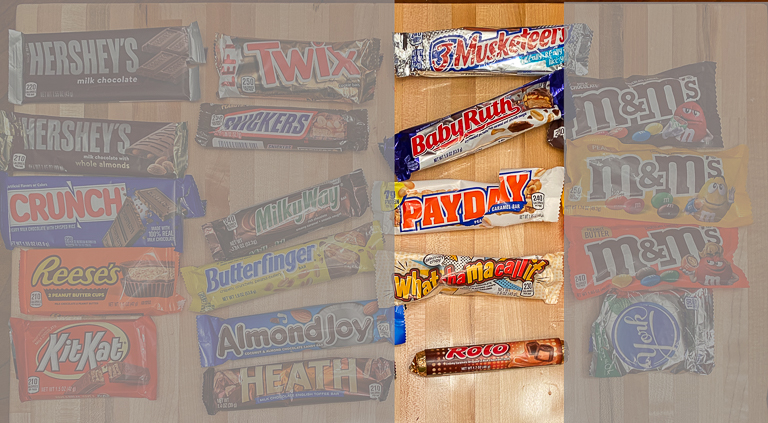 3 Musketeers is all fluffy nougat covered in chocolate.
Amy - I might pass on that.
But Amy, you've tried everything else!
Amy - Okay...
Rita - I don't care for those.
Ian says it's so good. But it's just all Nougat, so many didn't care for it.
The Baby Ruth though was interesting. Peanuts, Caramel, Nougat, and Chocolate. Wait. Where have I heard that before? Snickers are also Peanuts, Caramel, Nougat, and Chocolate. Same thing!
Snickers is on the left and Baby Ruth is on the right. The nougat looks to be a different flavor. 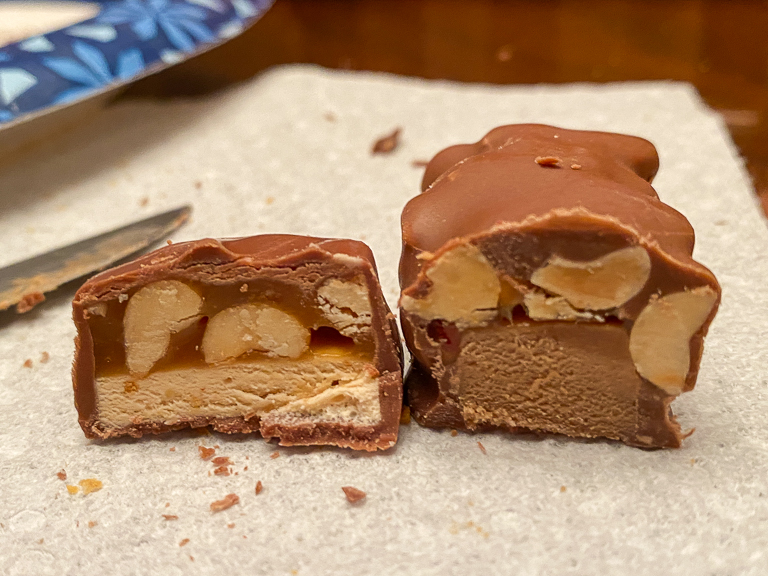 As I was cutting them up, I noticed we've got an outlier! This is supposed to be a Chocolate Candy Bar taste test! There's no chocolate here at all! We've got another Fruity Candy candy taste test coming up and this one doesn't fit that one very well either. I guess it'll just have to go here.
Everyone loved this one. Amy wanted to just put it in her pocket without anyone else trying it.
Tyler is back in. And he took two pieces!
Amy told us a story how when she was little, she was eating a Payday and all of the sudden she tasted blood. One of her baby teeth got caught in the caramel and she swallowed it! 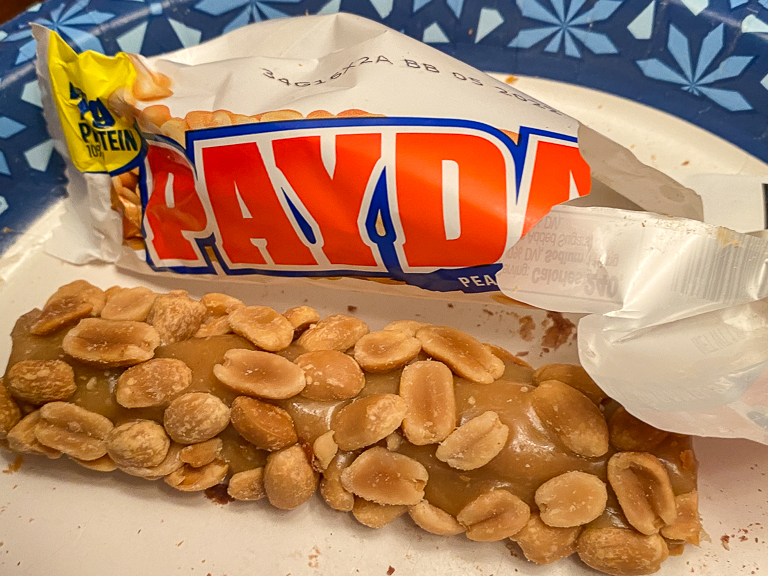 Amy and I both remembered the classic commercial for the Whatchamacallit Bar from the 80s. And now it's going to be stuck in your head too! Amy forgot what it tasted like, but remembers it was good. She doesn't think she's tried it since 1989!
Rita remembers she won a limbo contest on roller skates when she was little and they let her pick a candy bar, and she chose a Whatchamacallit.
Tyler - That's the last one I'm trying. <tastes it> Ugh. That's not good. It's like Crunch but it tastes stale. Now I need to try the York to get that taste out of my mouth.
Theresa - Eww. That tastes yucky. Wow that was bad.
Rita/Amy - Very artificial flavor.
Further research showed that Hershey changed the formulation back in 2008 to be cheaper ingredients. Technically this is "chocolate candy" not milk chocolate, so maybe we do remember it being a lot better.
Amy - I know I like Rolos, so I'll pass.
Really?
Amy - Okay... I'll eat one.
That didn't take too much convincing.
Theresa also thought she really liked Rolo with their chocolate and caramel. Now, not so much. Her tastes have changed.
The caramel is very stiff. It's not runny caramel like Caramello.
The favorite is this column is:
Payday - Tyler, Theresa, Amy, Richard, Aubrey, Rita, Joe
3 Musketeers - Ian
Rolo - Alli
Baby Ruth - Chi
For our final column we will be trying M&Ms (1941), Peanut M&Ms (1954), Peanut Butter M&Ms (1989), and York Peppermint Patties (1940). 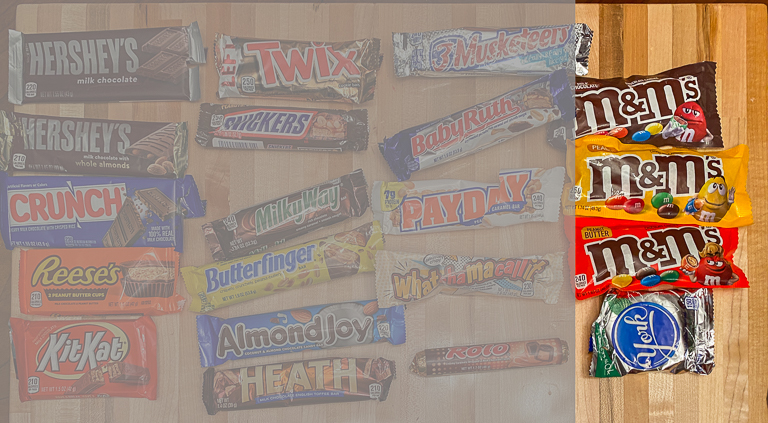 Amy - I can't do any M&Ms. I'm going to end it on a York.
Really? But M&Ms are tiny.
Amy - I'm going to get sick tonight.
Ian - I'll take care of you.
Eventually she tries them. The regular M&Ms are just okay.
Tyler - I've had these before, so I already know what they taste like.
Are you sure?
Tyler - Okay, I'll try them again.
People were starting to get a little over-saturated with chocolate. 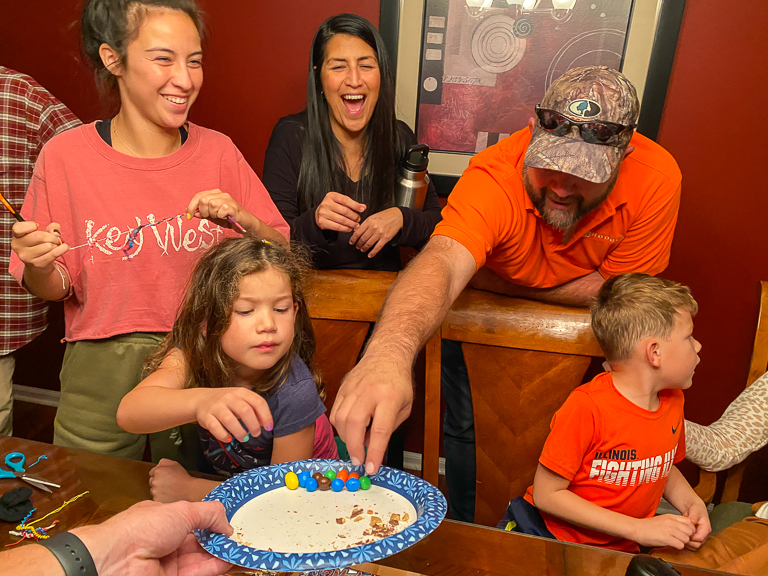 The Peanut Butter M&Ms are good, but not as good as the Peanut M&Ms. They're more rich than the Peanut M&Ms, so Amy said she couldn't eat as many. T thought she liked PB better, but now she knows she likes Peanut best.
The York Peppermint Patty was going to be in an earlier column, but Rita suggested it should go last, as the minty flavor will overpower many of the other flavors. It's also the only candy bar on this list that has dark chocolate!
I cut a few pieces off the large circle for everyone to try. I didn't cut it all up though. There's still a pretty big piece left. And while everyone else is wondering why they have eaten all this chocolate, which one does Alli go for? 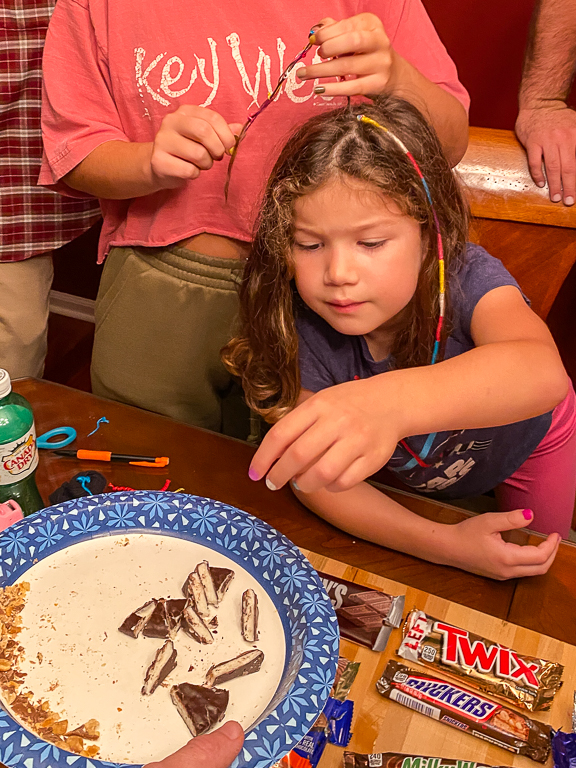 Of course the big one! 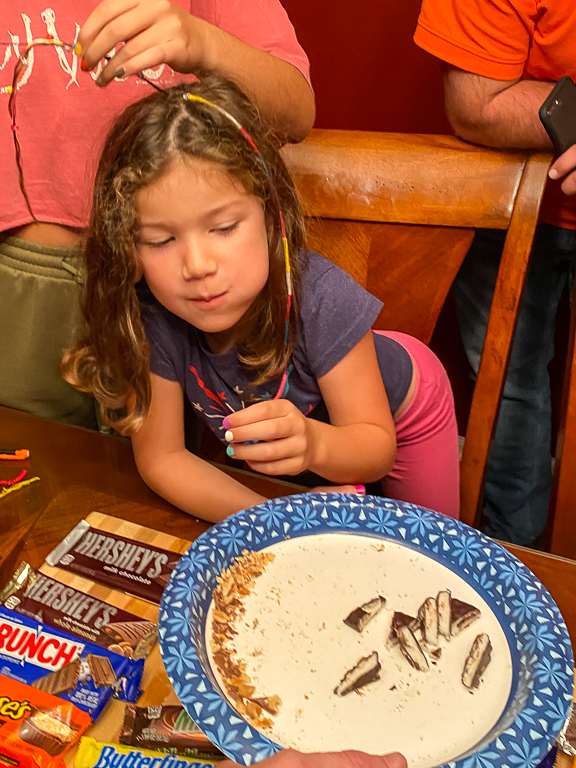 Want a York Rita?
Rita - No thank you. It tastes like toothpaste to me. I don't like Jr Mints either.
Aubrey - Yep, these are like toothpaste dipped in chocolate.
Tyler - I used to like them as a kid, but the mint is too overpowering now.
Favorites from that column are:
Peanut M&Ms - Tyler, Richard, Chi, Aubrey, Amy, Rita
York Peppermint Patties - Ian, Alli, Theresa, Joe 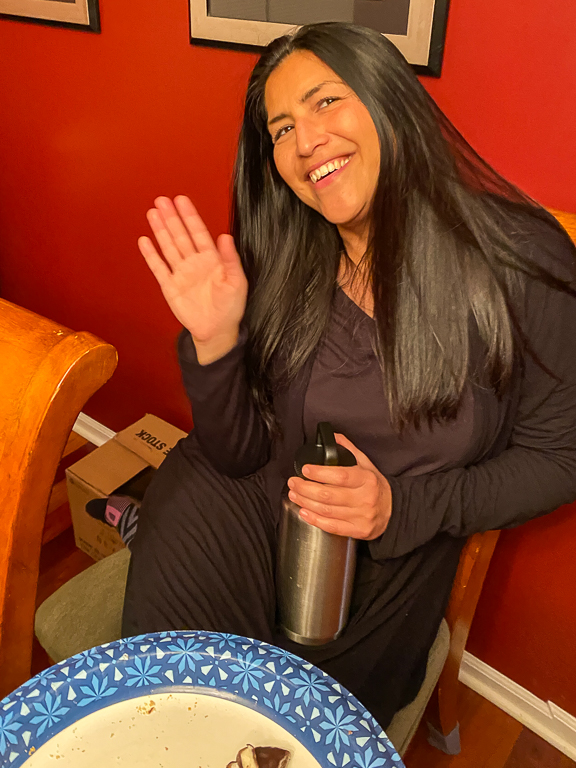 Wow, that was some taste test. We've got a little bit of chocolate left over. The kids and I will have to figure out something to do with it. 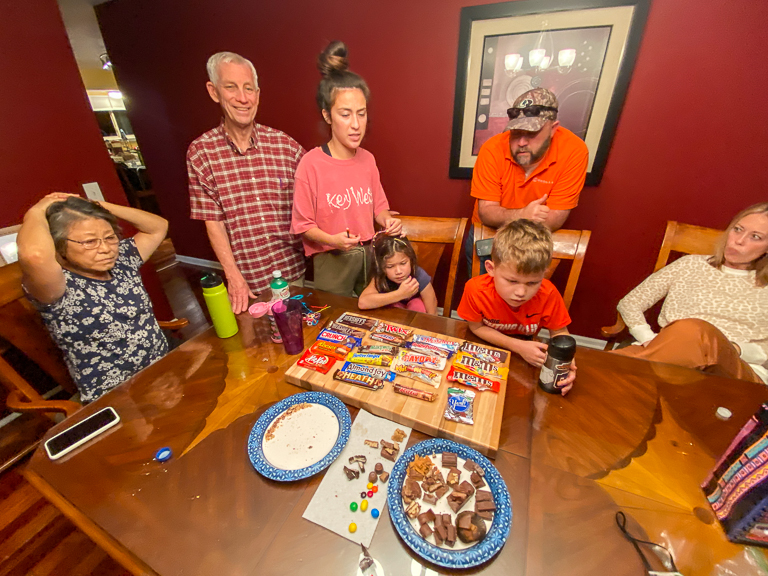 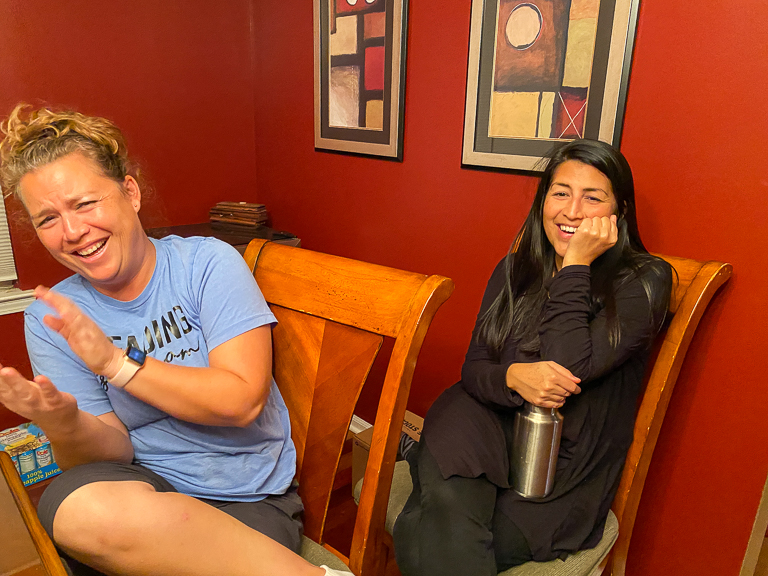 I know a few people tapped out and didn't try all 20 flavors, but these kids, Aunt Amy, and I did. 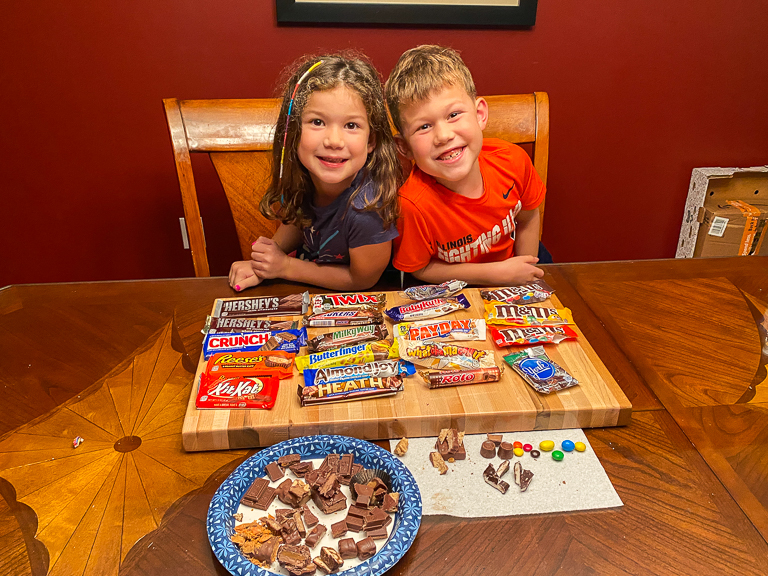 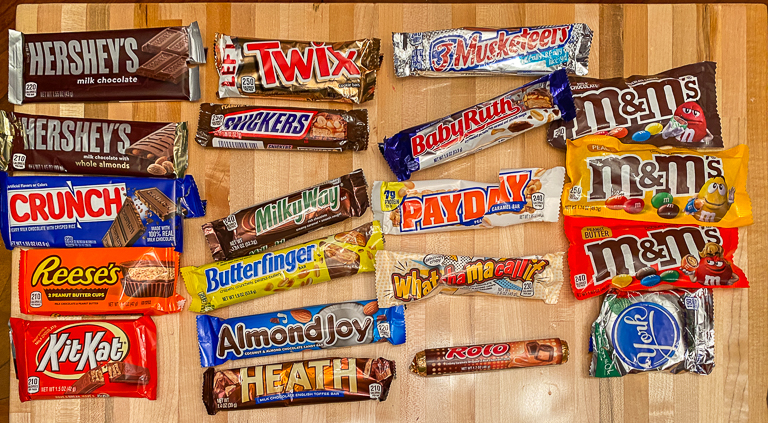 Alli's favorite is the Hershey's Chocolate Bar. Just Pure Milk Chocolate. Nothing else added it. 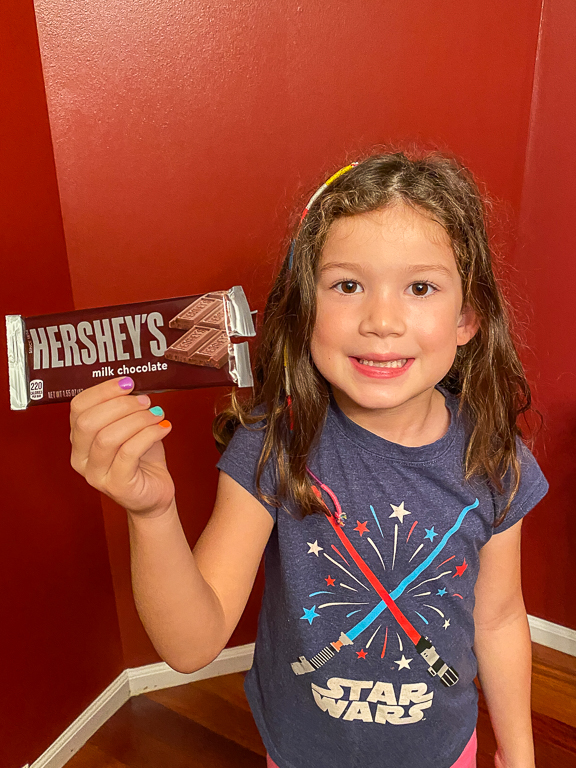 And for a fan of Nougat, Ian loves the 3 Musketeers.
This was a really fun taste test to do! Thanks Aunt Jess and Uncle Jon!
But we're not through yet! There's still a Fruity Candy taste test to go! 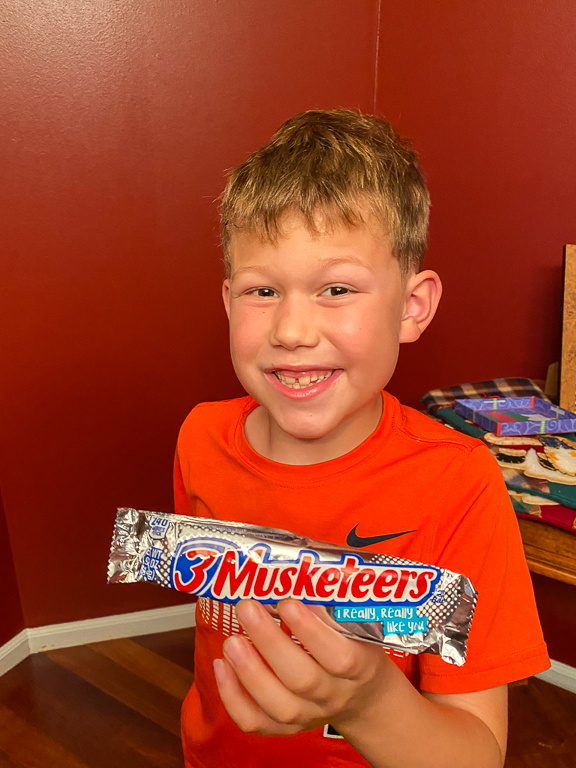