When Theresa and I were trying to figure out all the different places to go in the RV this year, there was one place I definitely wanted to go. Theresa and I have been here years ago, all the way back in 2002 between college semesters. It's one of the first things I have posted on the blog. Click through if you want to see me with bleach blonde hair and a goatee, and Theresa with very short hair.

Back then, we only went on the Canadian side. This year, due to Covid, there's so many hoops to jump through if you want to go over to the Canadian side, needing a Covid test within 72 hours and proof of vaccination for all eligible persons. Not wanting to spend hundreds on the tests for just a few hours on the Canadian side, we're going to be spending all our time on the side of the American Falls. Let's go check it out! 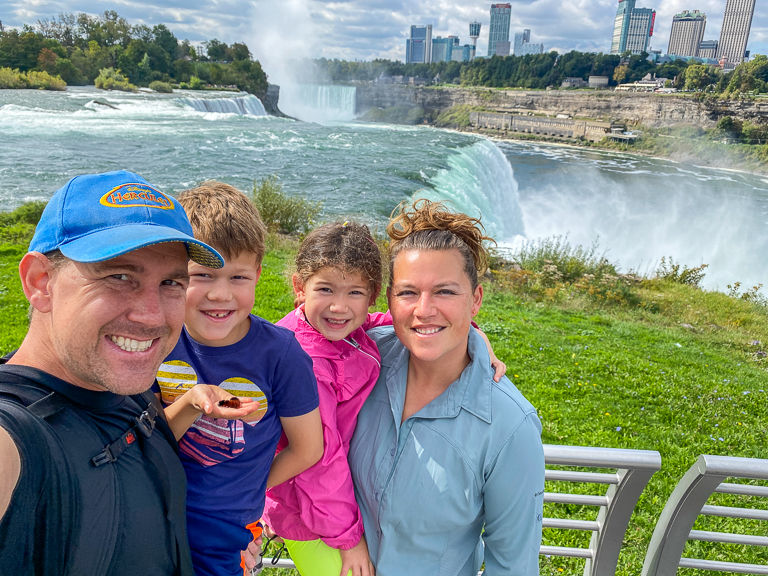 Parking is available near the Falls for $5-10, but if there's free parking, we certainly don't mind walking. The Niagara Gorge Discovery Center is currently closed, but the parking lot is available for free parking. 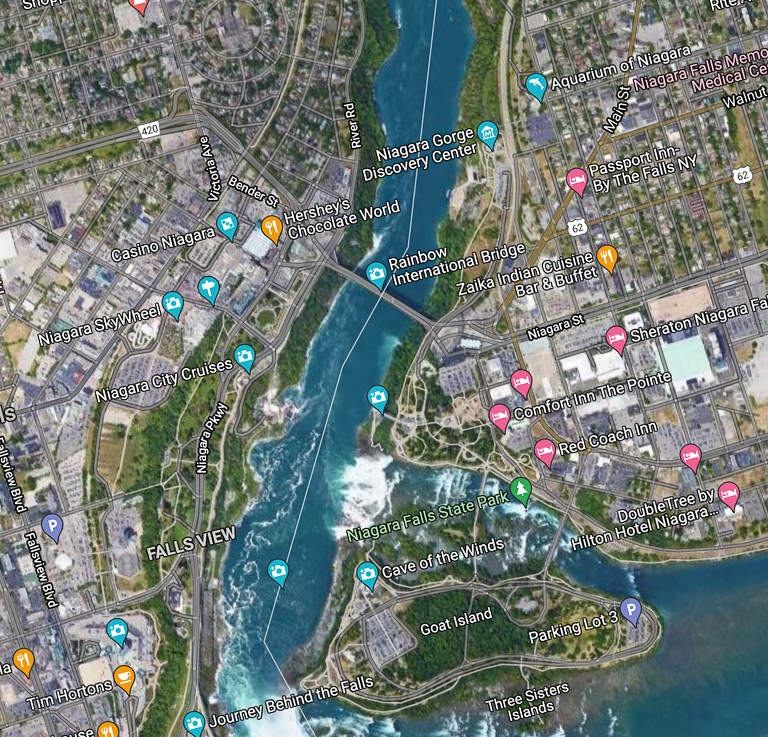 And it's just a 0.75 mile walk over to the American Falls! We parked here every single time over the next 5 days when we were coming to see Niagara Falls. 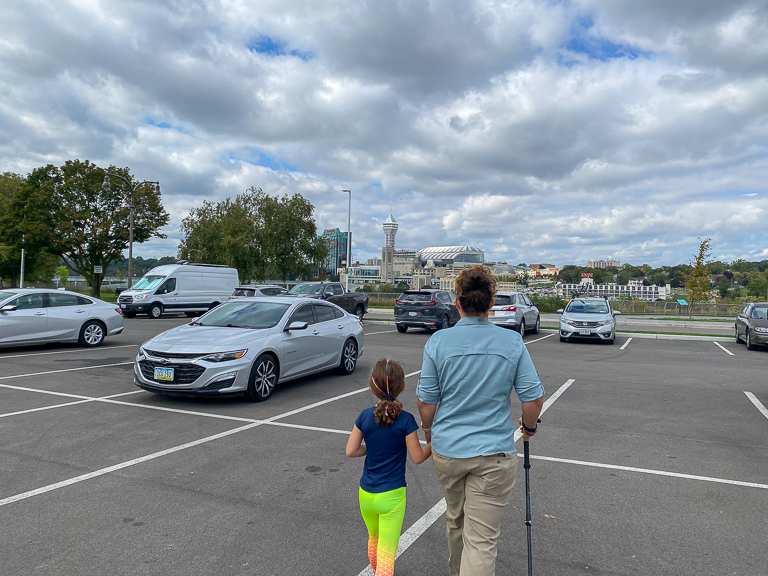 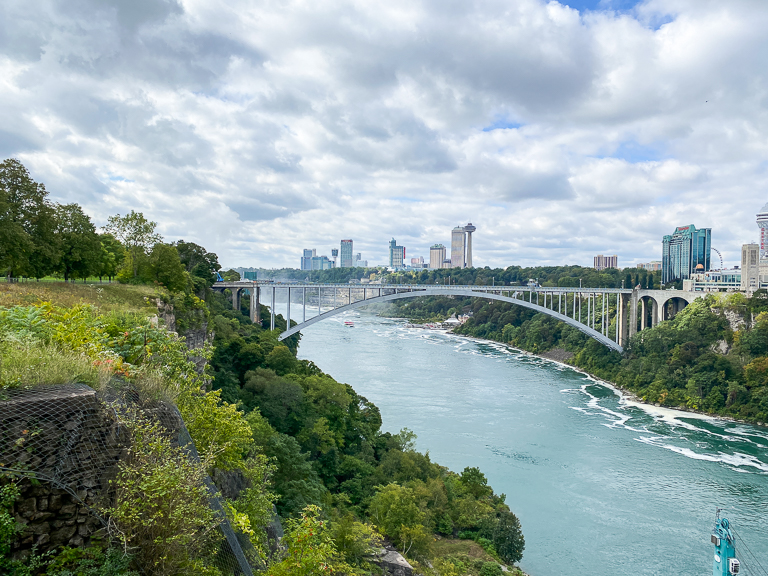 Ian - I see a giant Hershey's Kiss!
Where? After he pointed it out, we all saw it. They were really excited! They remember going to Hershey's Chocolate World in Hershey Pennsylvania a few weeks ago. The kids want to go, but it's on the Canadian side. And it's also not nearly as extensive as the one we went to. It's just shopping with none of the other special rides or activities we got to experience. 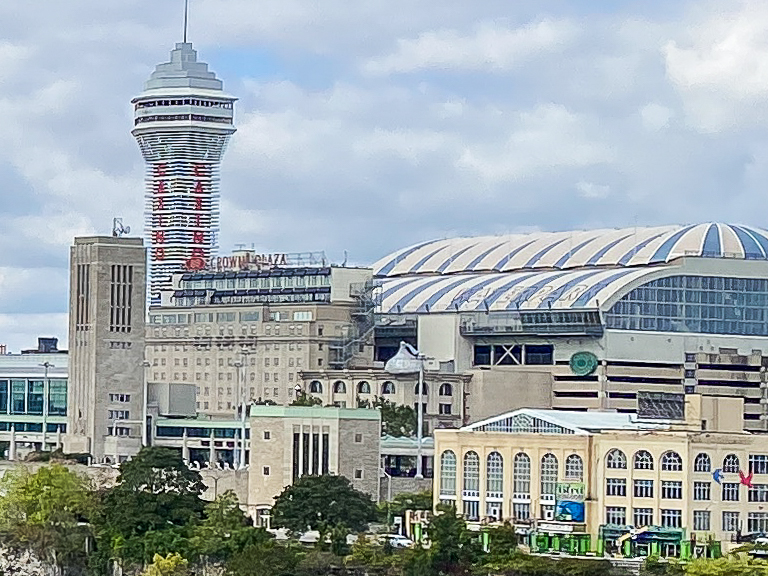 We walked along the sidewalk beside the river towards the falls, through Niagara State Park. 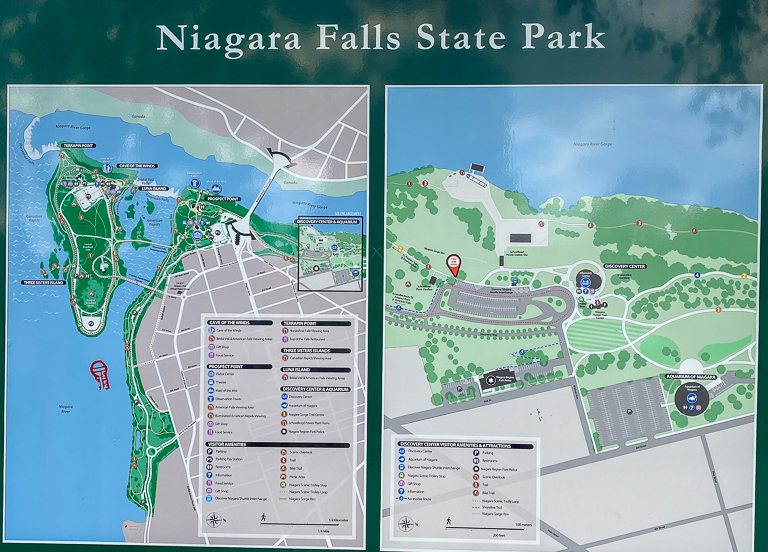 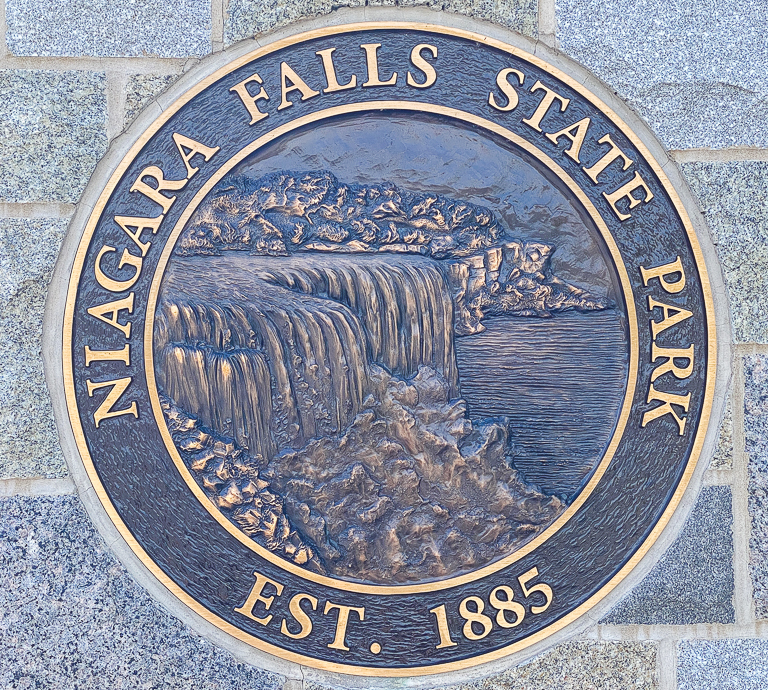 Along the way, Ian found a very fuzzy caterpillar! I believe this will become an Isabella Tiger Moth, and is also known as a Woolly Bear. Guess Ian has a new friend! 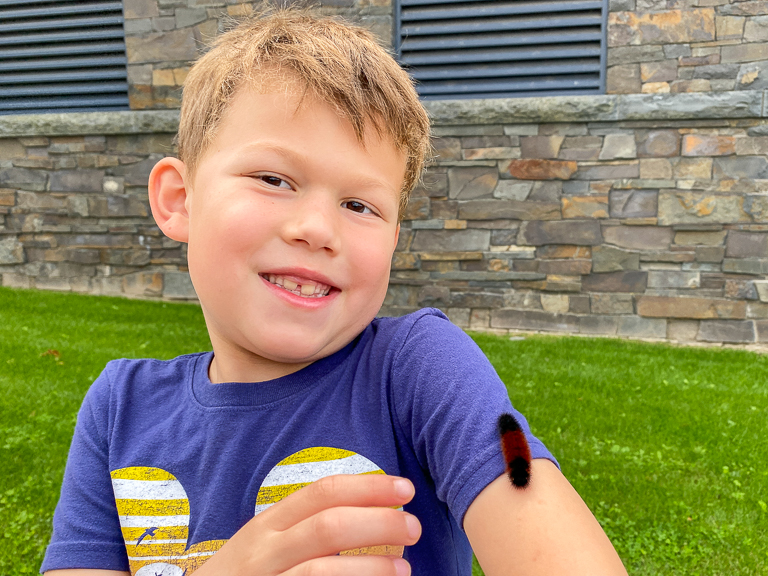 Those flags in the middle of the Rainbow Bridge separate the US and Canadian borders. 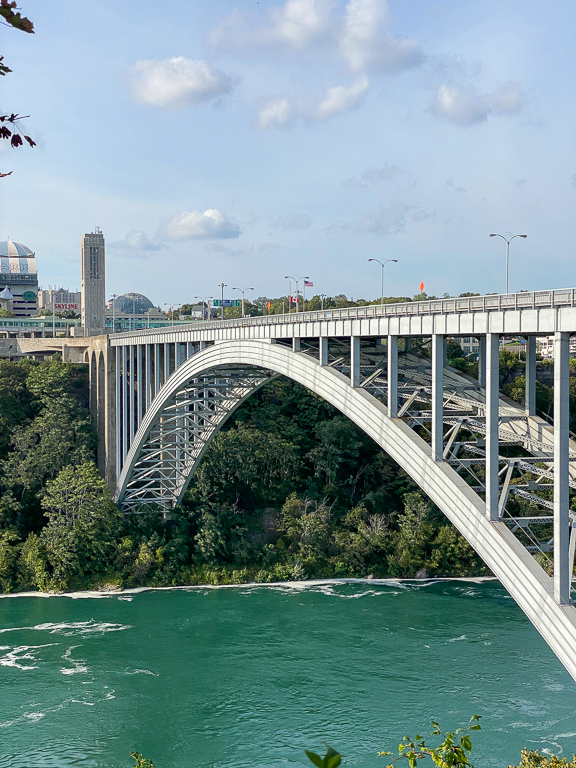 Come on kids! Let's check out these amazing waterfalls! 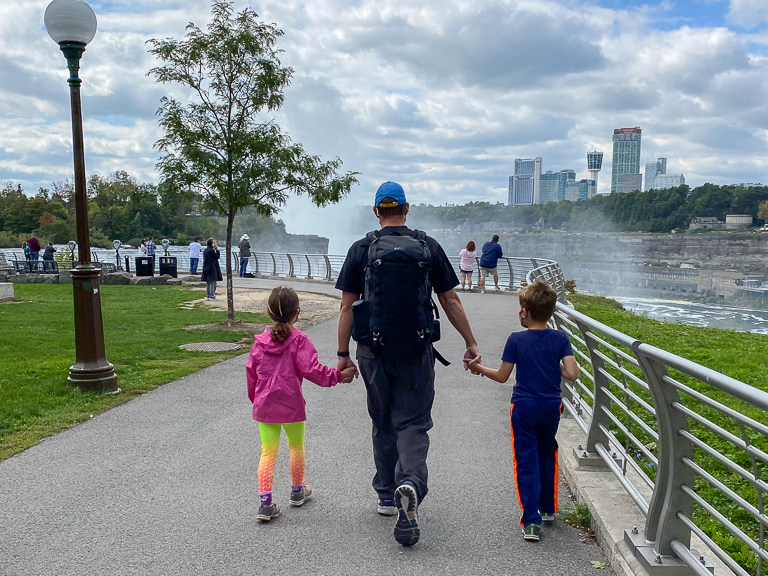 Wow! Have you ever seen so much water flowing! 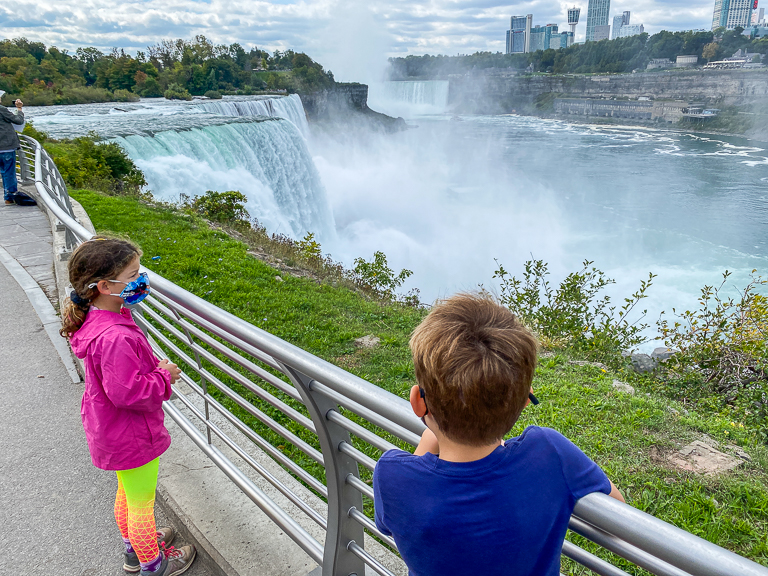 What do you think Mr Caterpillar? 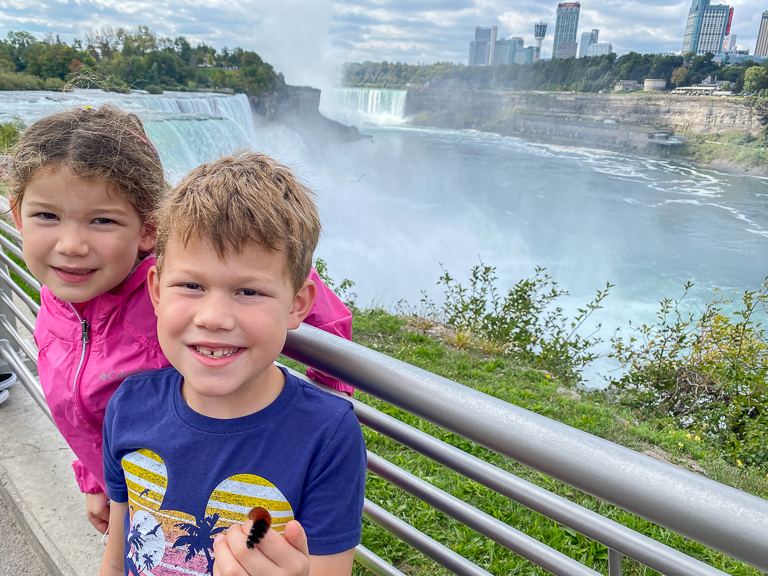 Have you ever seen something so amazing so close up? 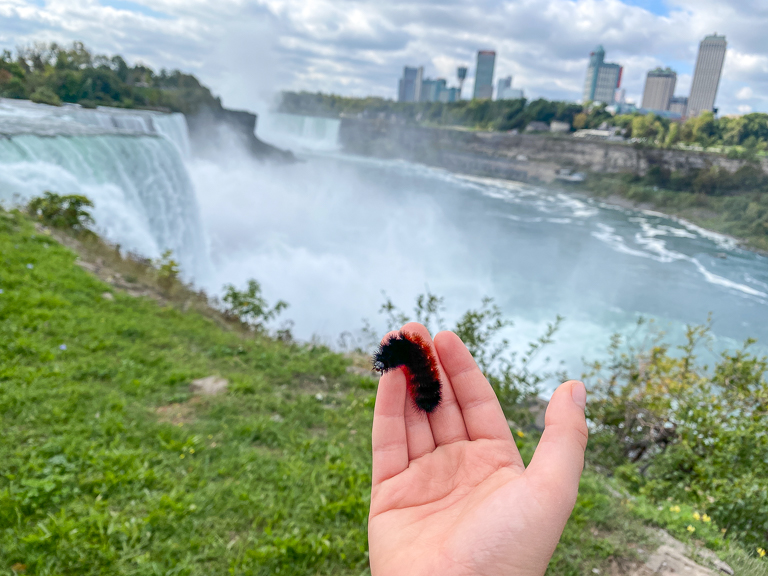 We're on the north edge of the American Falls, but since we're on the American side, there's a lot more to see! Using a pedestrian bridge, we can walk over to the very large Goat Island to see Bridal Vail Falls as well as the shared US/Canadian Horseshoe Falls. 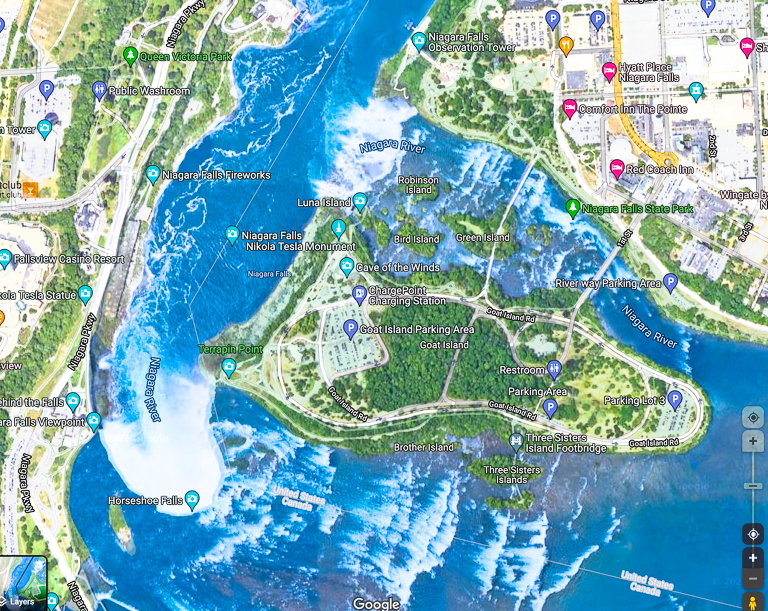 Let's go check it out! The bridge is this way! 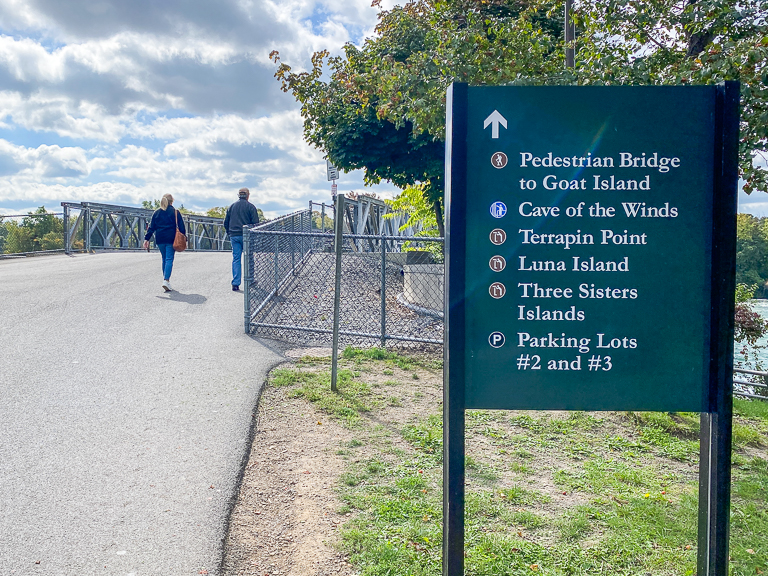 The water is raging right below us. Looking towards the edge, you wouldn't know that there's a 176 foot drop waiting for you at the end of it. 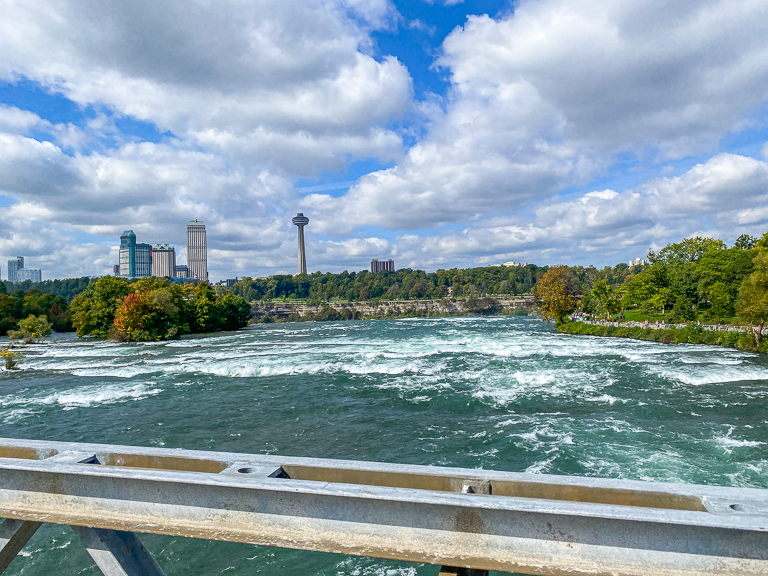 You can walk right next to the river here, and the amount of water that is moving its way to the edge is staggering. 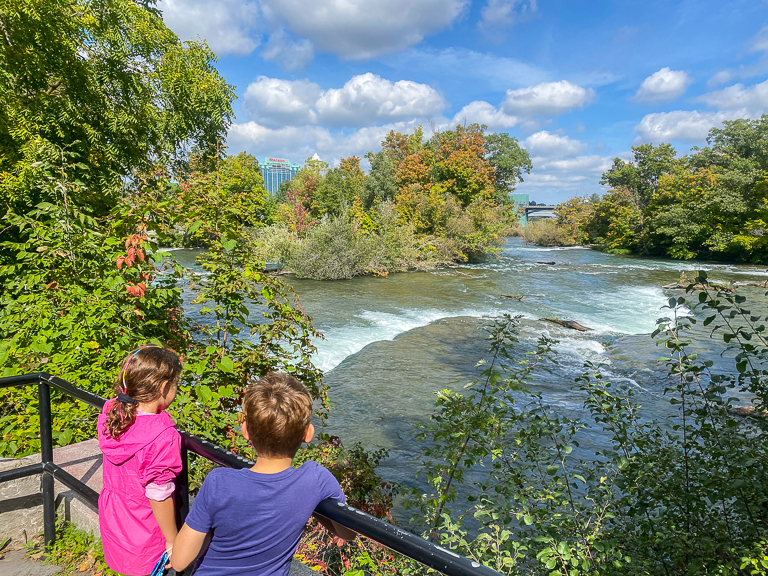 The speed with which it moves is also impressive. Don't fall in, or you'd only have a few seconds before you're off and over the edge. 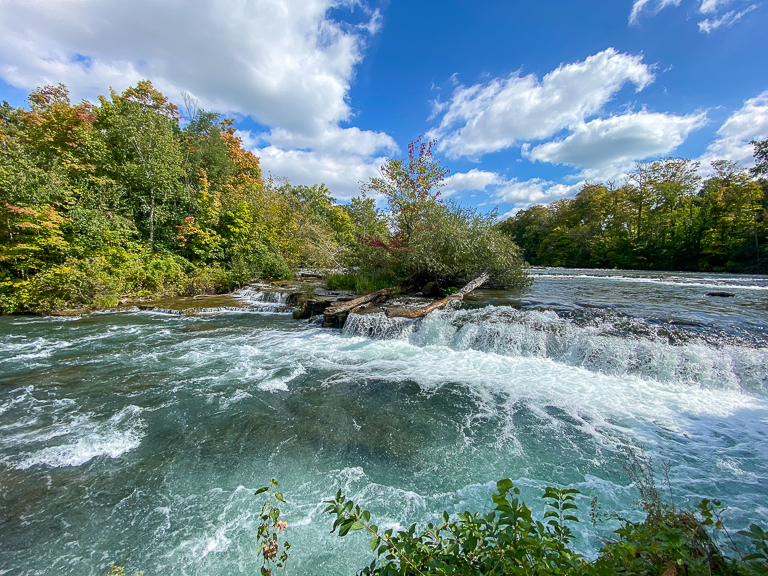 Niagara Falls is a combination of three different waterfalls. One of the Great Lakes, Lake Erie, supplies the water to the Niagara River. Once it gets close, water that goes north of Goat Island is destined to go over the American Falls or Bridal Veil Falls. Water that goes south will go over Horseshoe Falls.
The crestline of the falls is 1100 feet and wow, 75000 gallons of water goes over the edge every second! That's enough to fill 1785 standard bathtubs in 1 second! It would take about 9 seconds to fill an entire Olympic swimming pool. 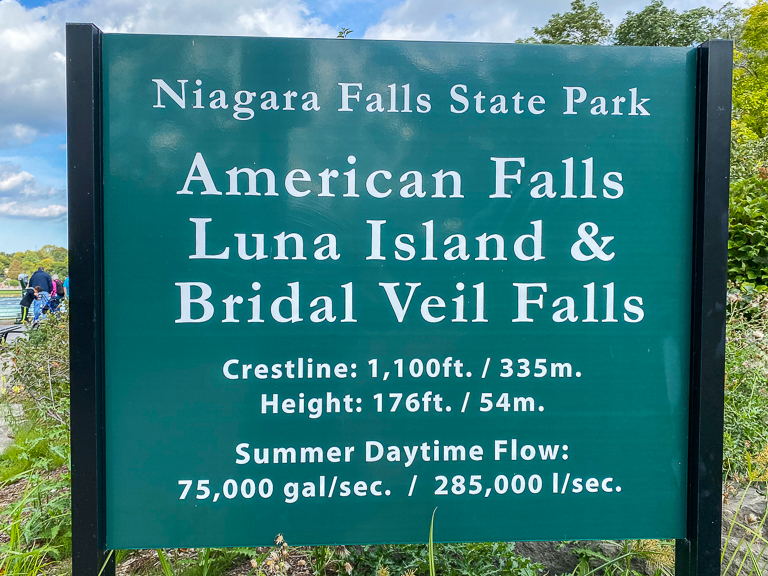 People say "Go to the Canadian side! The Canadian side is the best side!" I don't know about that. On this side we can stand right between two amazing waterfalls! Bridal Veil Falls on the left, and the American Falls on the right! You can feel the power and you're right in the middle of it!

Just feet away is a giant rushing waterfall. 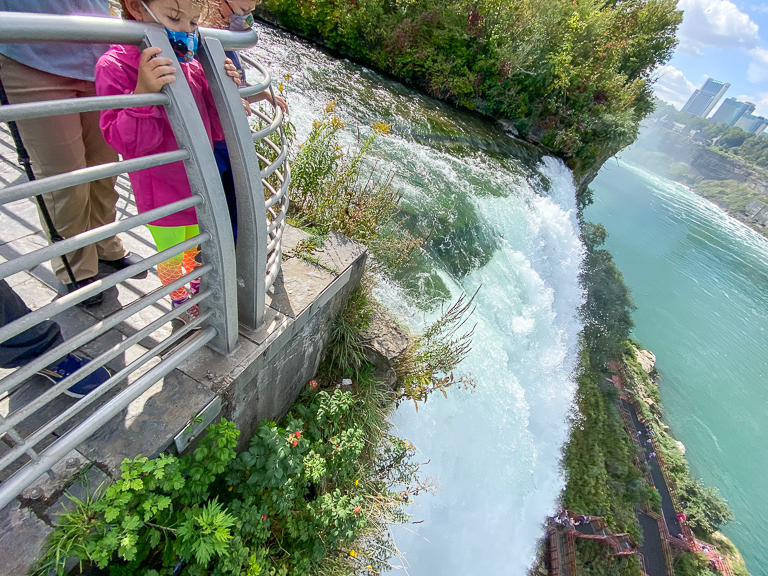 And right below on the Cave of the Winds tour, people are getting absolutely drenched! Ian totally wants to go down there! 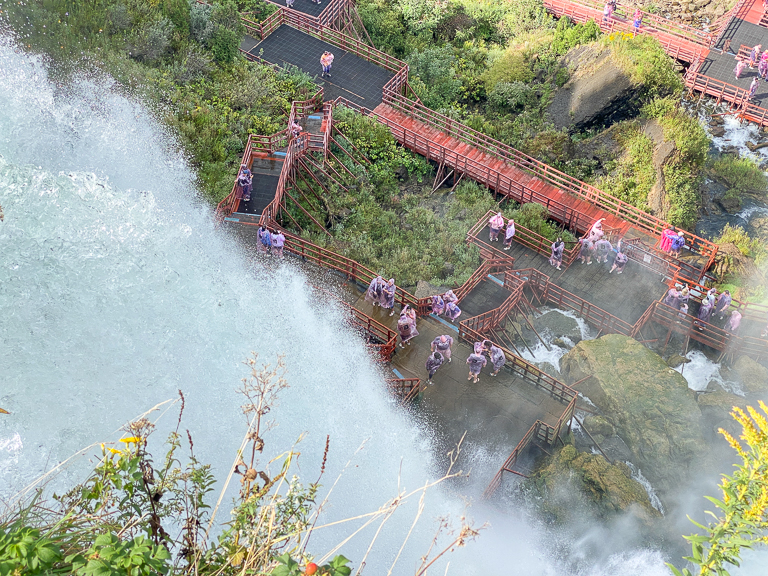 Theresa's trying to get a photo. 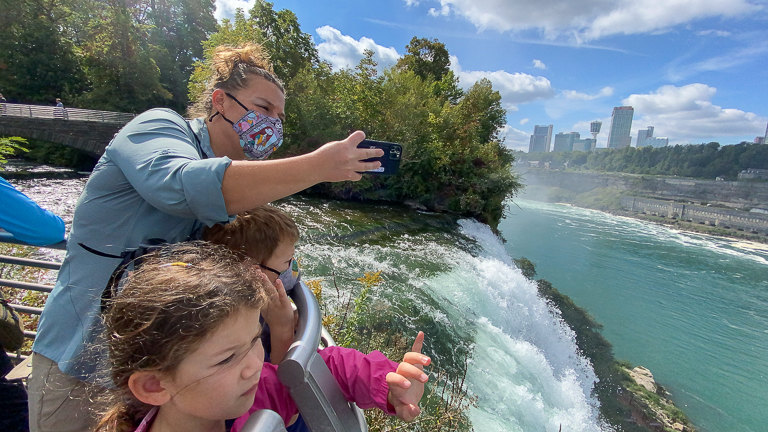 The spray that comes up from this makes a beautiful rainbow! Here she is capturing the whole arch. Ian told us that there's sure to be leprechaun gold down at the bottom under those rocks, if we could go dig it up. 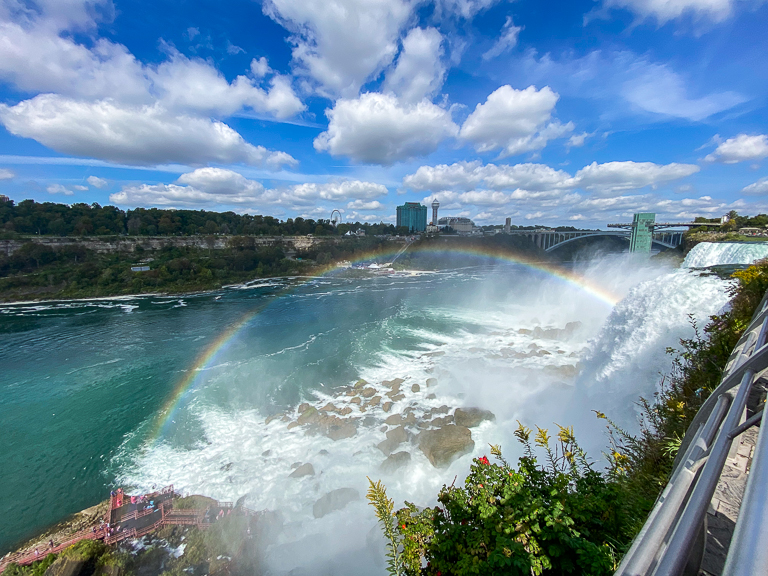 Very nice alignment Theresa. She was wondering if perhaps this might have been inspiration for the name. The bridge was opened in 1941 after the previous bridge collapsed in 1938. 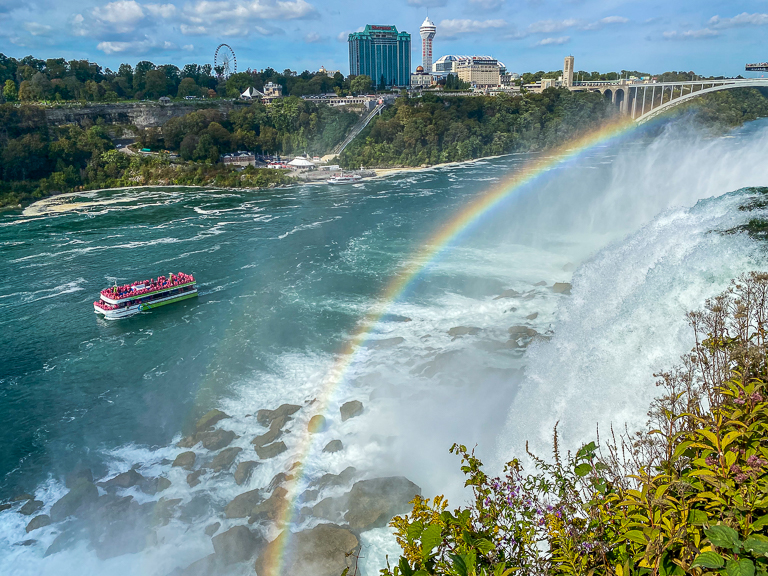 The American Falls is pretty great, and I love how you can get right up close to it, but main waterfall, what Niagara is known for, is a few hundred feet up the pathway. As we got close, we could feel the spray coming down on us like rain. 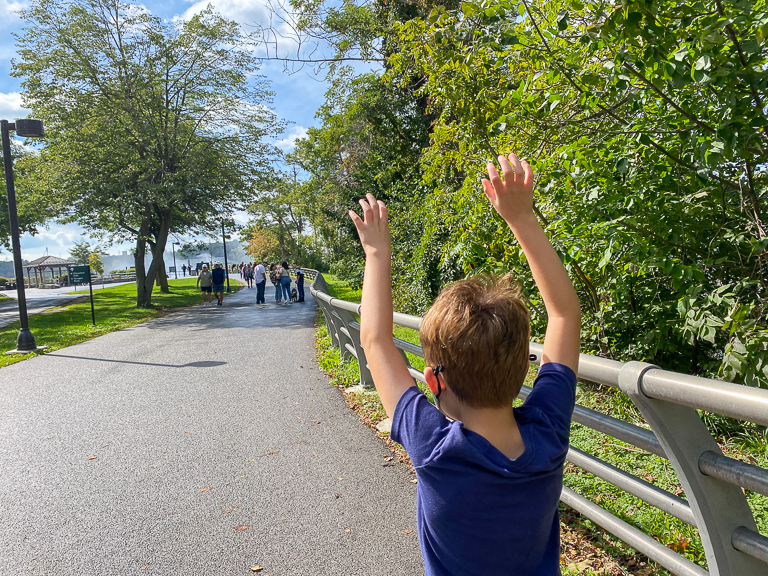 And as we got up to it, Theresa got all the rain jackets out. Despite the blue skies, it looks like it's been pouring over here. 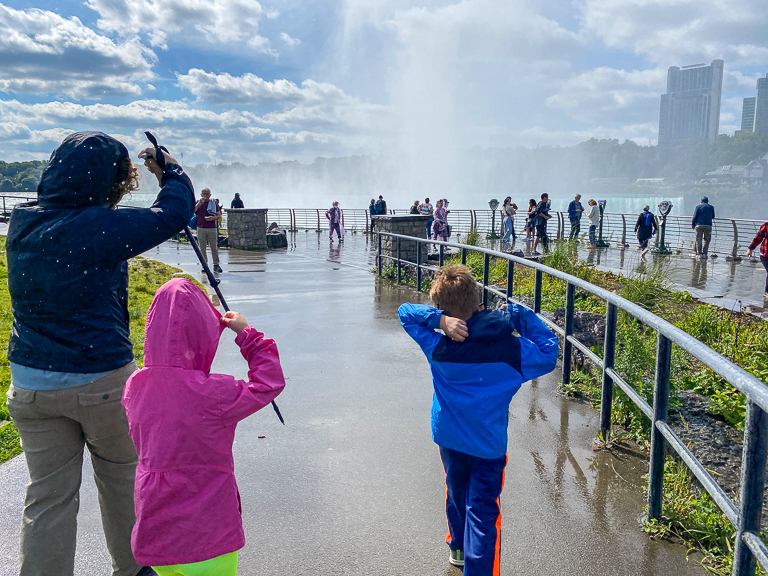 Wow! Now this is something incredible. Horseshoe Falls looks so much different than any other waterfall. With its circular shape, it's no wonder Niagara Falls has been declared one of the Seven Natural Wonders of North America. There are certainly other waterfalls that are taller, but Niagara has the highest flow rate of any waterfall in the world. 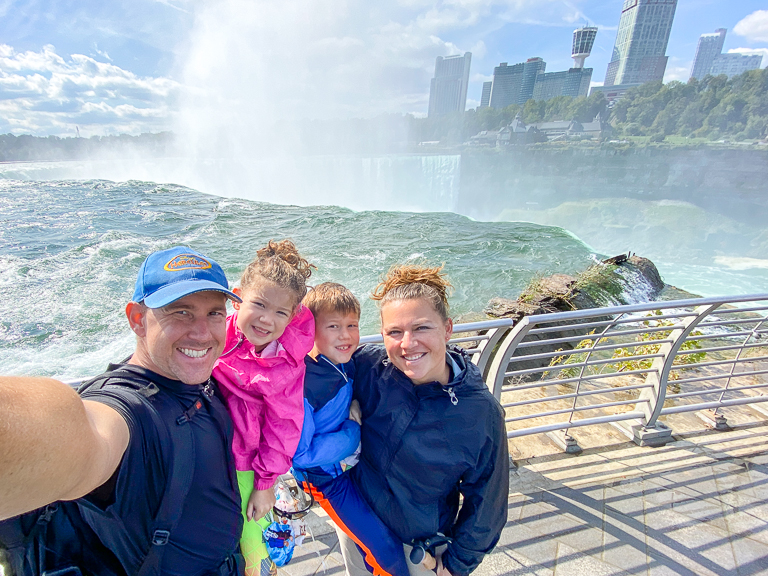 I asked Ian to watch the water on the opposite side and count how long it takes for it to fall the 167 feet to the bottom.
Ian - Thousand one, thousand two, thousand three, thousand four. About 4 seconds.
Yep! It doesn't take too long to go that distance. 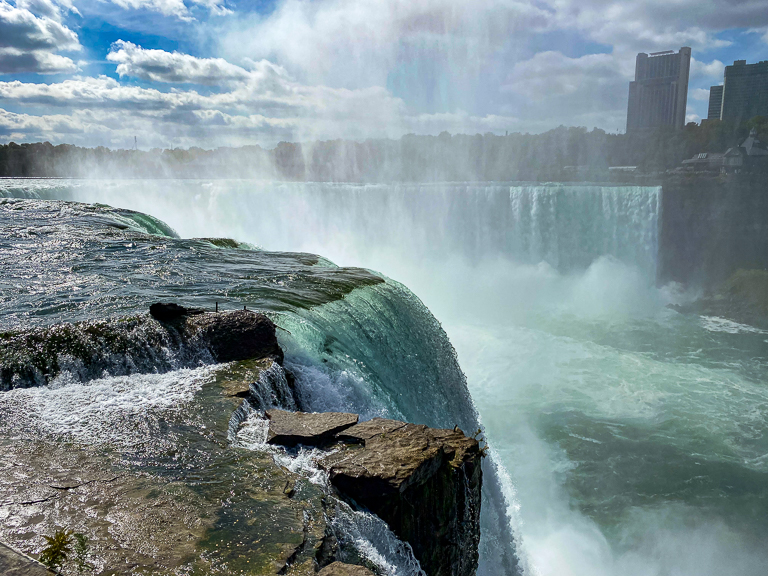 Next I pulled up the movie clip from Superman II, where a boy is playing on the rails, slips, and falls over. We counted how long it took for Superman to save him.
Ian counted 30 seconds. Wow, he would have been way too late. Just for grins, I used a free-fall calculator, including terminal velocity, and guesstimate that in 30 seconds, the boy would have fallen 3500 feet. Way more than the 160 foot height of Niagara.
Ian - What's that boat?
That's the Maid of the Mist. They go right up to the base of the falls, as close as you can go! The people who go on it have to wear ponchos because they get so wet.
Ian - I want to go on that! 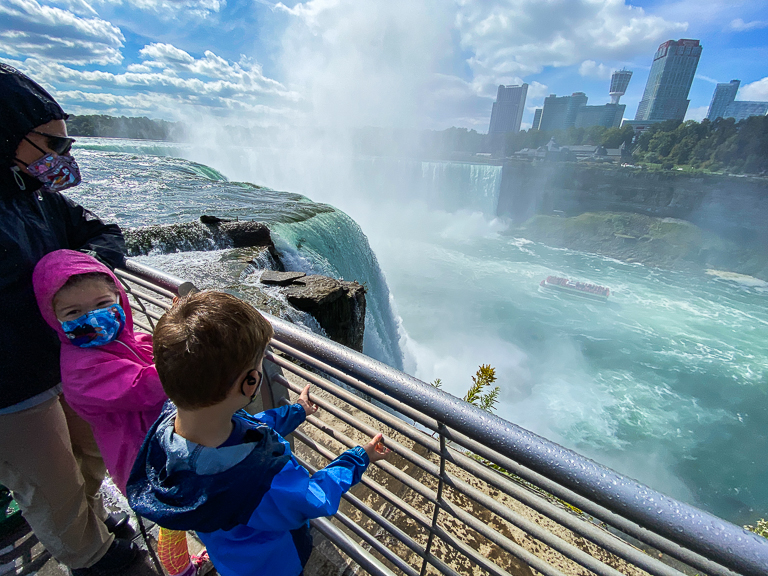 Horseshoe Falls is quite impressive. The crestline is 2500 feet and an amazing 675000 gallons of water go over the edge every second! That's 9x more than the American Falls! It would fill up an Olympic swimming pool in less than a second!
There's so much more to see and do here, so I'll continue the rest in Part 2. 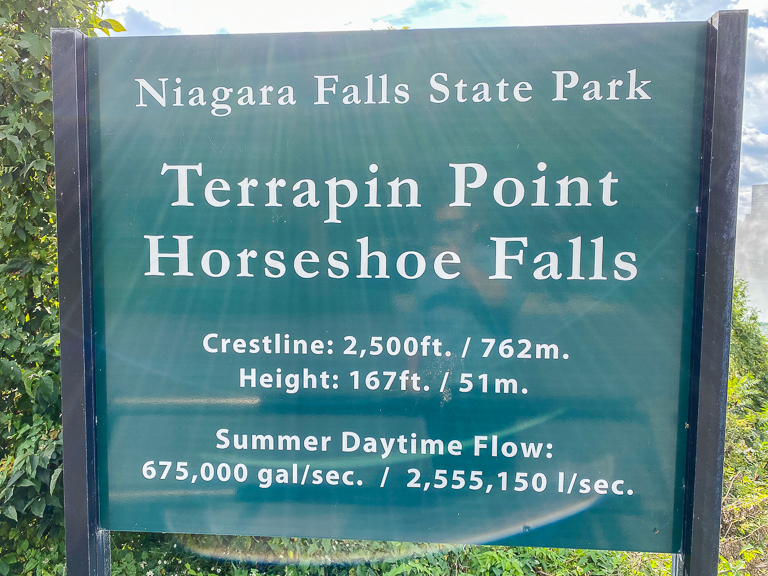