It's always fun when Disney has special scavenger hunt events. We've loved finding Easter Eggs and Valentines Cards back at Disneyland. When I saw that Epcot has a special Ratatouille scavenger hunt with Remy searching for ingredients around the World Showcase I knew we'd have to go give it a try. 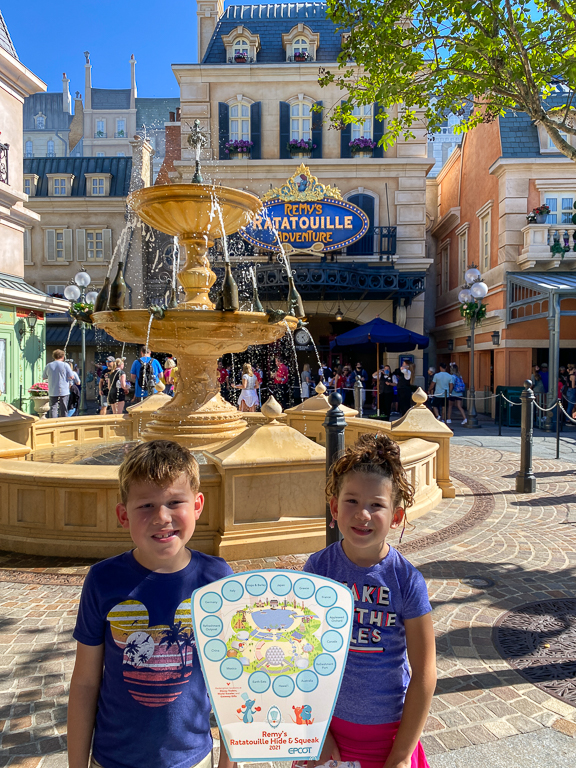 Before we get moving though, these adventurers need to hydrate. Club Cool is an ideal spot. 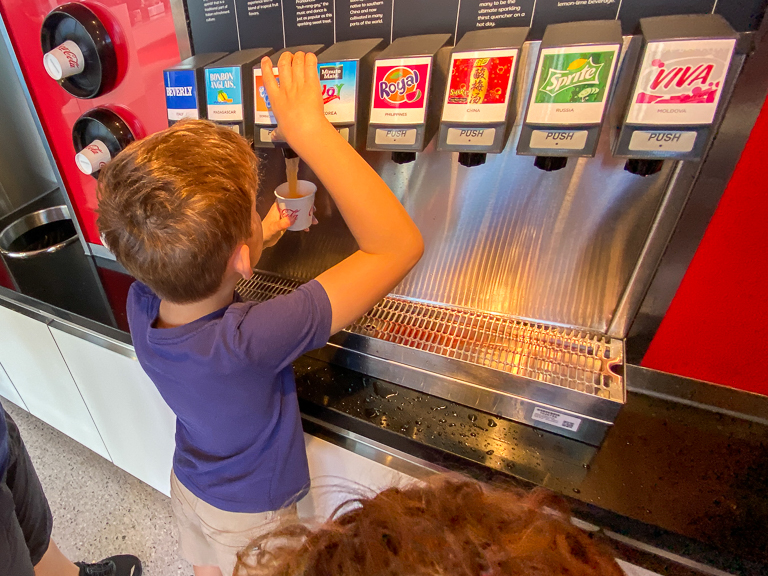 Along with the hydration, a little bit of energy in their bellies, in the form of popcorn, is required. 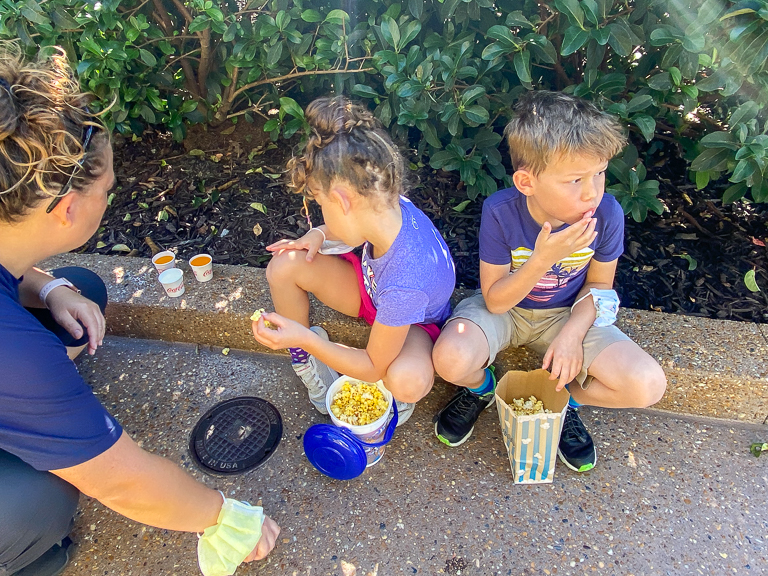 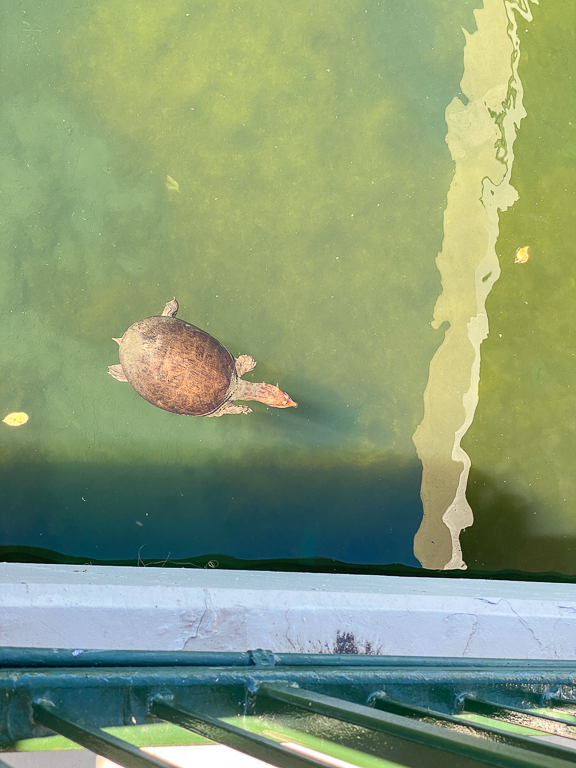 This event started back in August 2021 and it's now November 16th. The whole festival ends November 20th, so I knew there was a good chance we'd be too late to get the official maps. Sure enough, every location that's supposed to have them told me that they were sold out. That also means we won't be able to get the prize for completing the map (a Disney cereal bowl).
Even though we don't have an official map, I think we can still have some fun with this. Thanks to AllEars.net, I had a scan copy of this year's map. 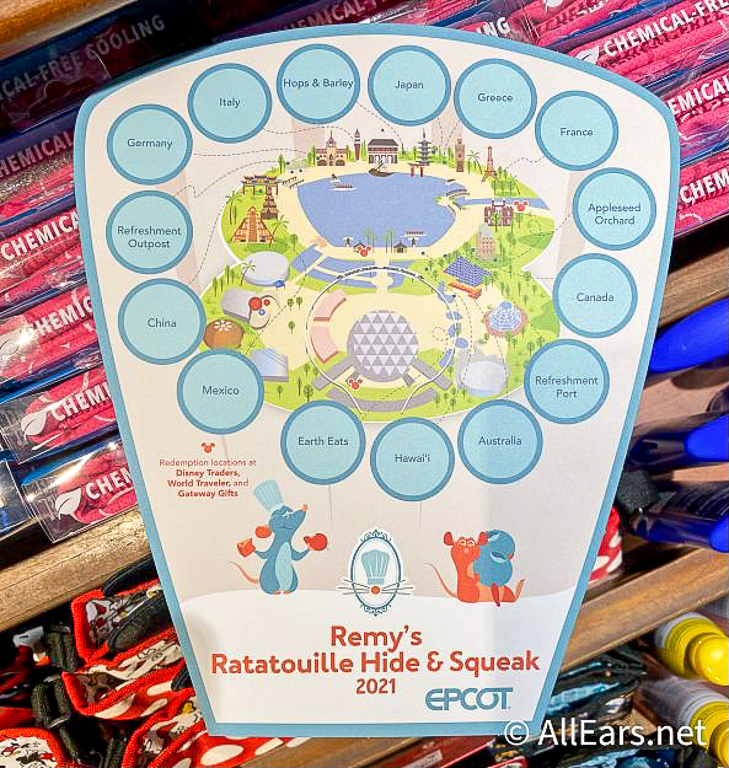 Along with a scan of the stickers. That's enough for us to get started! There's 15 different lands that we'll be exploring today on our quest to find ingredients for Remy. 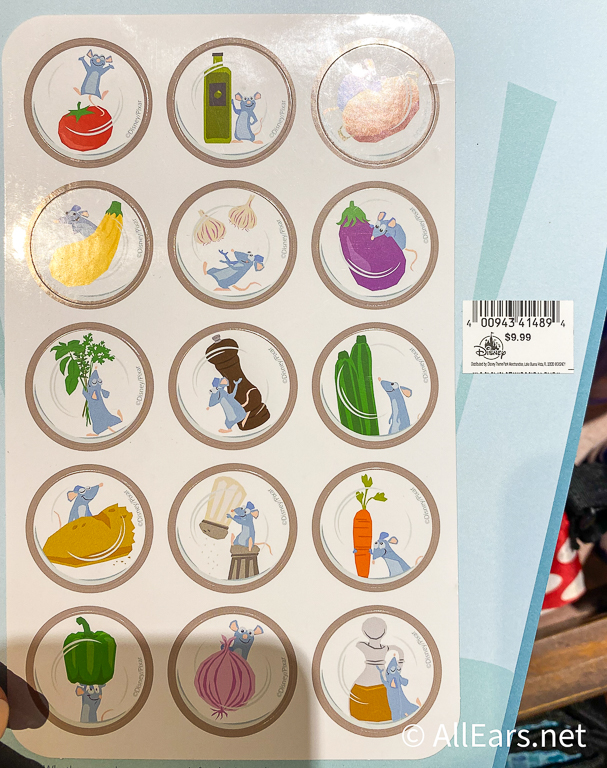 Our first is in Hawaii where Remy has found a bottle of syrup. Ian saw this a few days ago, but we didn't realize it was part of a scavenger hunt. Now that we know, it's an easy first find! 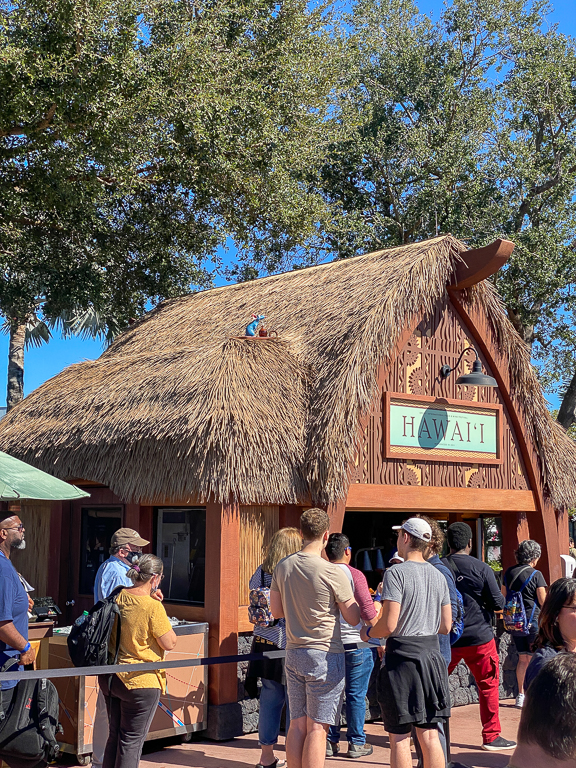 In Australia, Remy has found an onion. 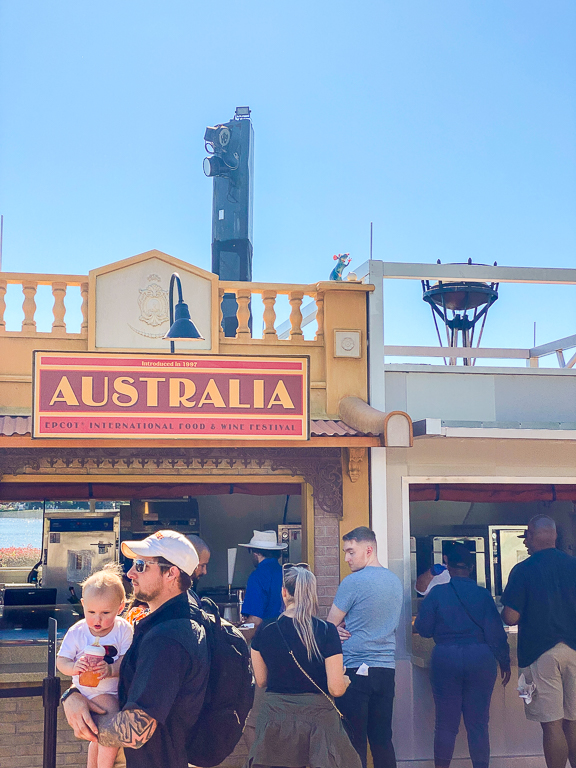 At the Earth Eats booth, Remy has found some carrots. 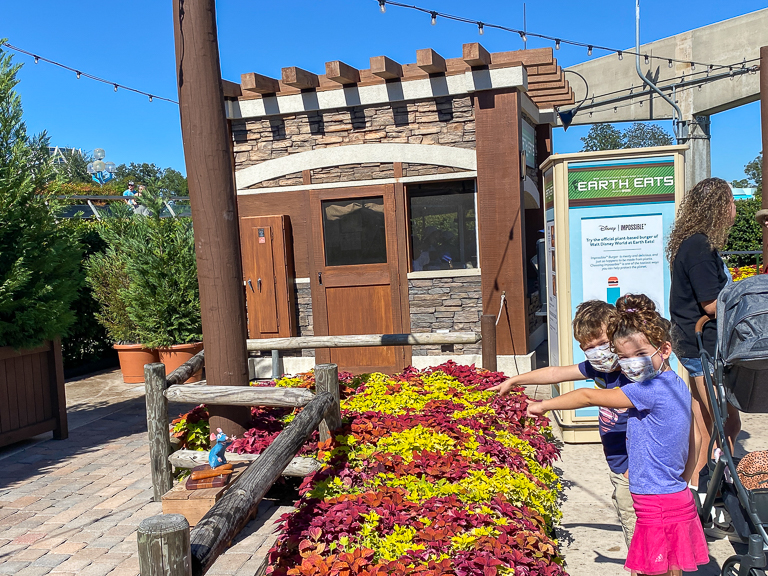 There's Tea and Herbs at the Refreshment Port. 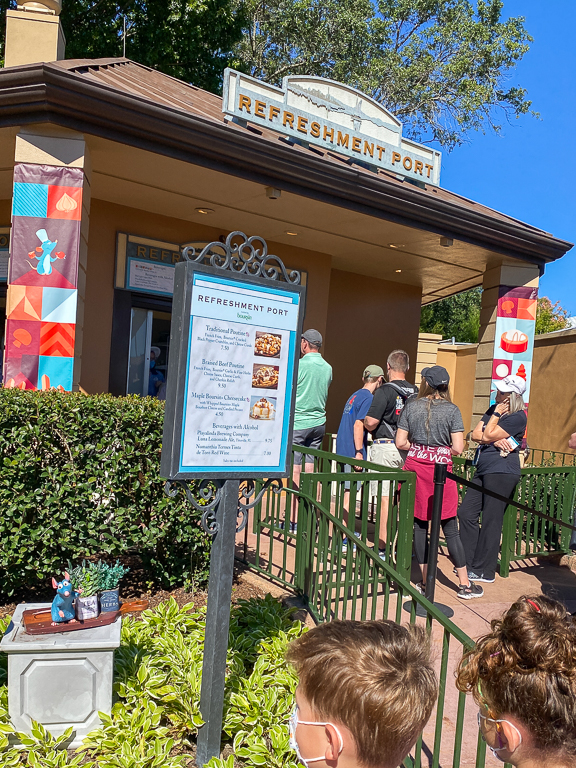 Hidden back in the Canada pavilion, Remy is hiding on the rooftops. 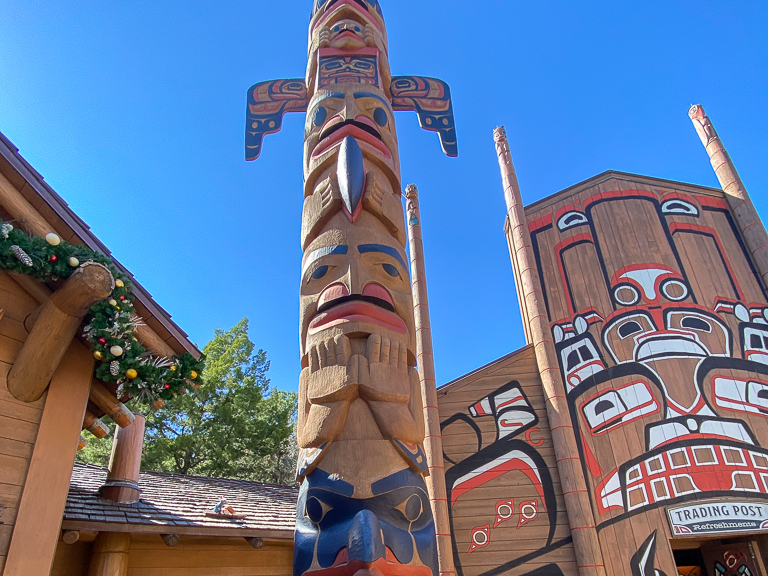 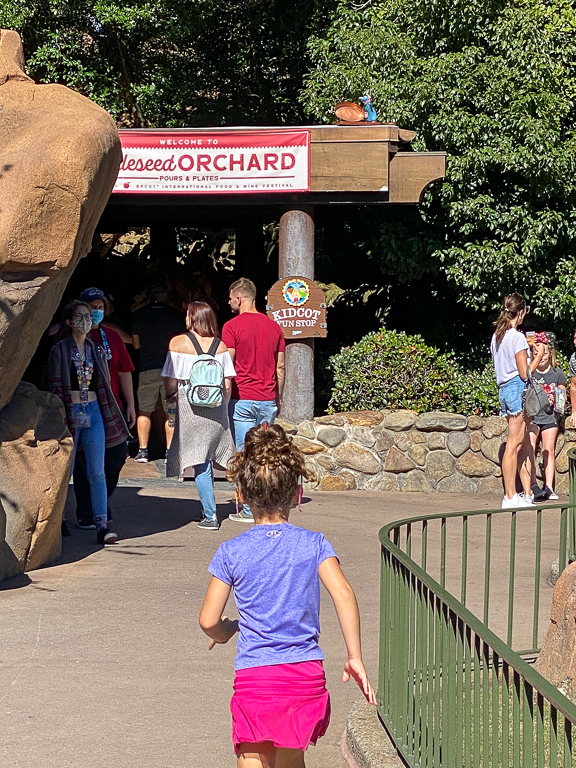 Theresa and I were just wondering if we'd ever run into anyone we knew while walking around Disney World. I didn't realize it would be so soon! As we walked through Canada, Theresa looked over and said "Isn't that Jacob's sister?" It is! Hi Nicole! She's visiting with friends and enjoying the last few days of the Food and Wine festival. She lives in the area and we promised to meet up again in the months to come. 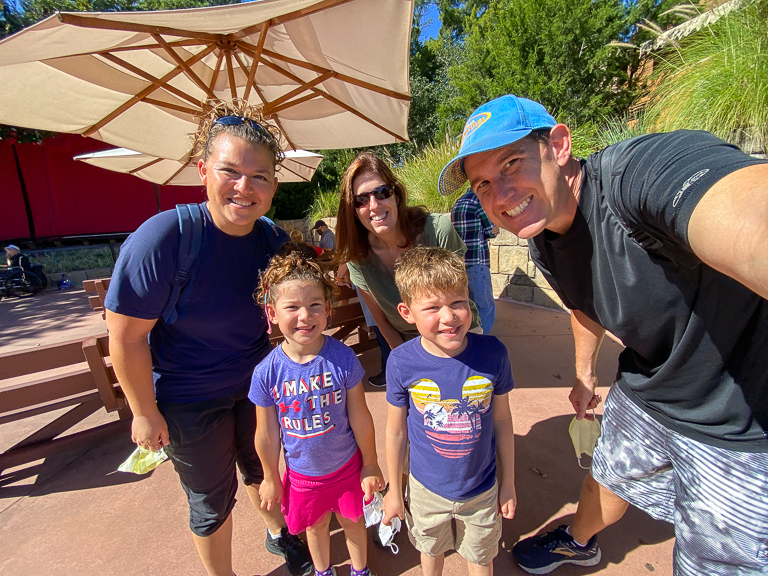 Our next stop is the France pavilion where the newest Ratatouille ride is. The kids took turns on Skinner's Vespa scooter and Colette's Calahan Motorcycle. 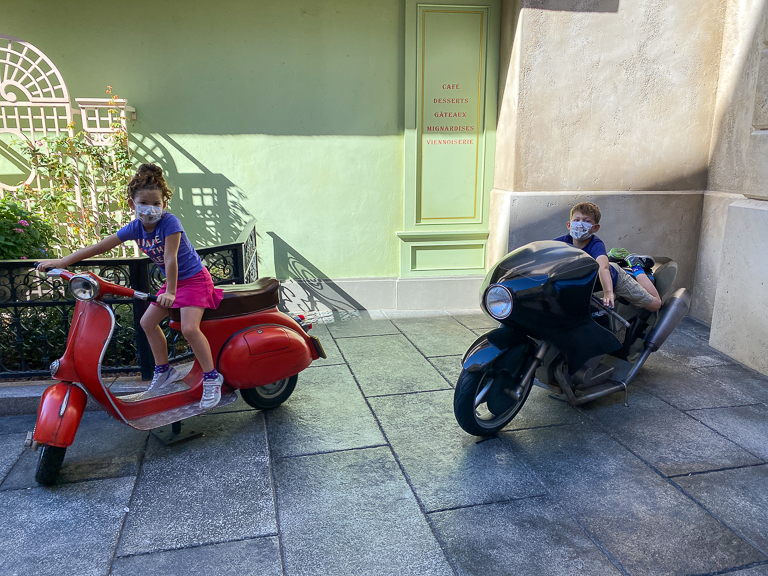 Buried towards the back of France is Remy with an eggplant. 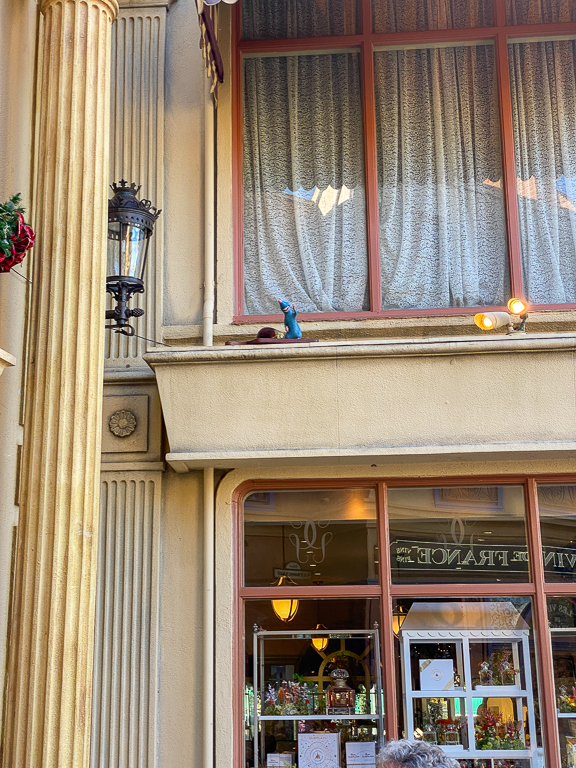 At the Greece pavilion booth the kids found Remy with a salt and pepper shaker. 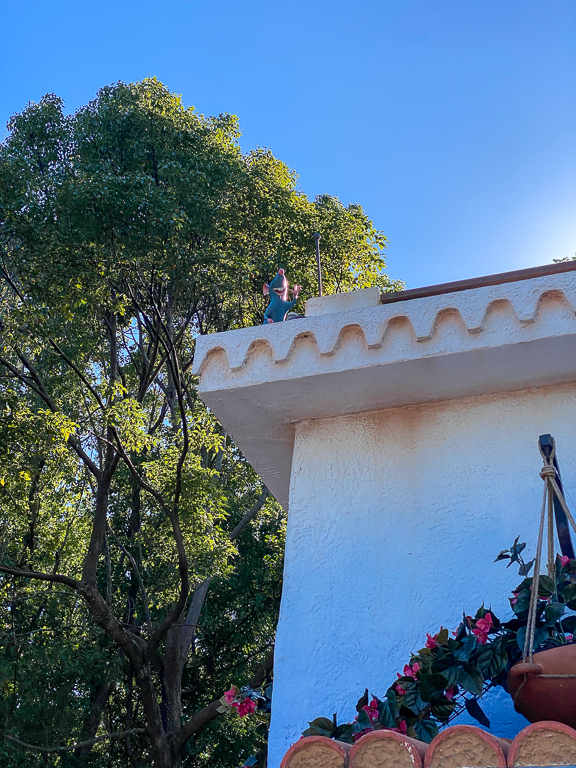 Japan was another large pavilion where Remy could be hiding anywhere. The shops here have a few of our favorite treats that we got to try in Japan. We'll have to come back and sample a few of those at a future date.
Eventually we wandered into the garden and found Remy with a couple zucchini. 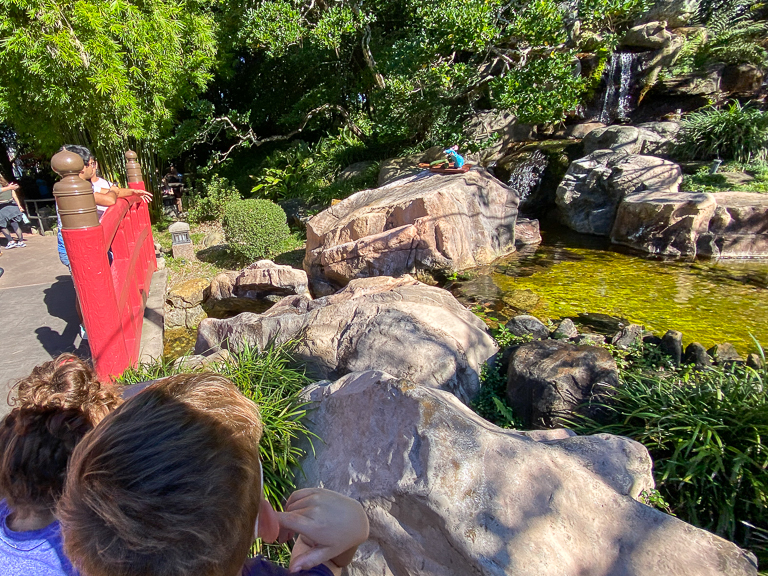 In the American pavilion, Remy has found bell peppers. 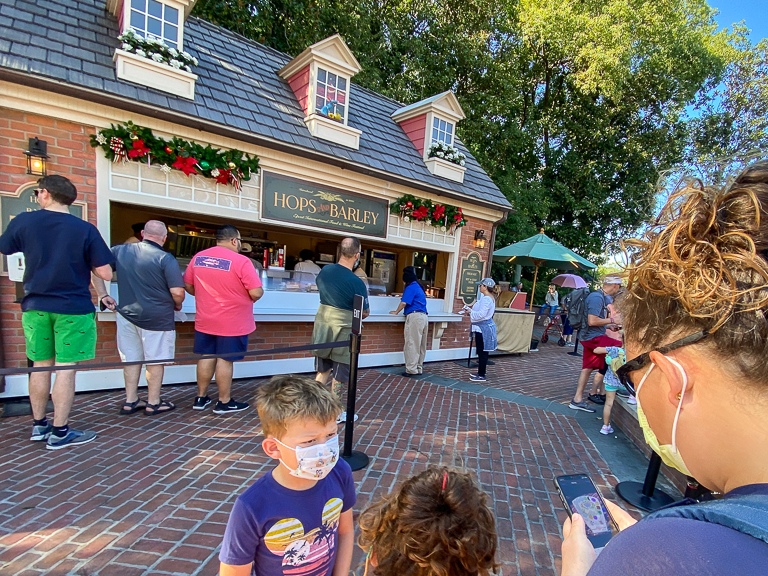 It was appropriate to find tomatoes in Italy. 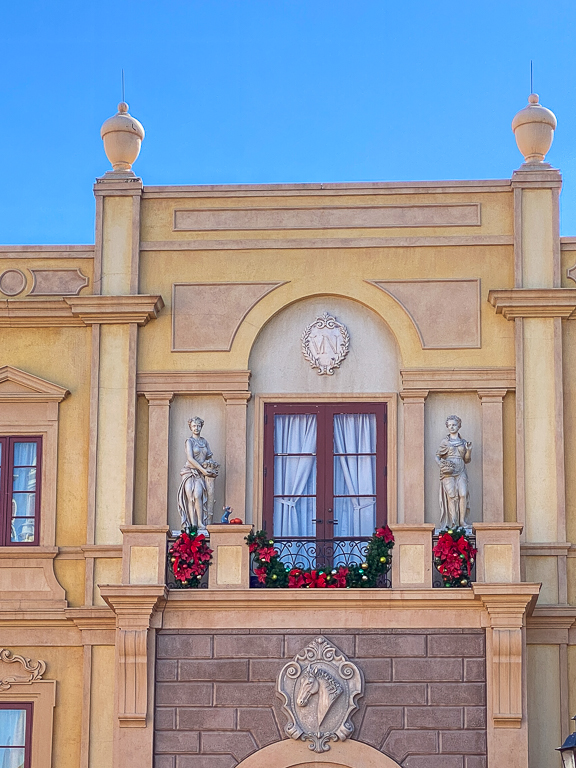 A bottle of olive oil in Germany. 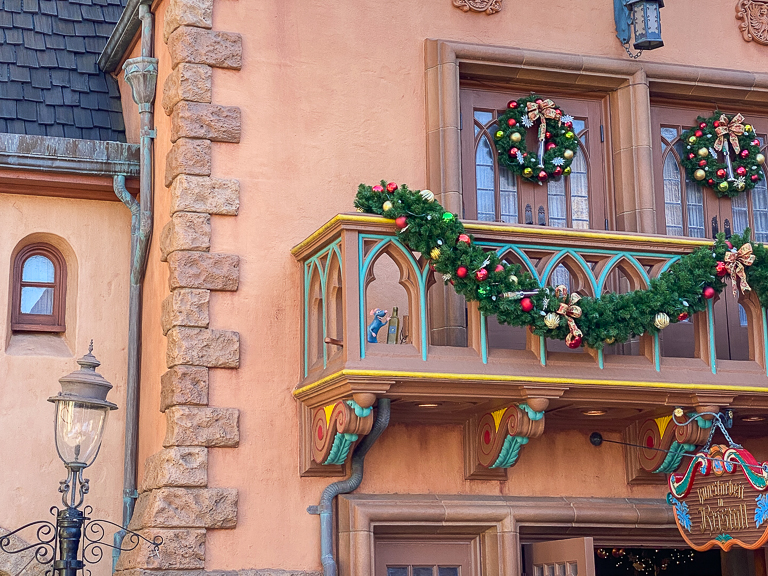 At the Refreshment Outpost Remy has found garlic. 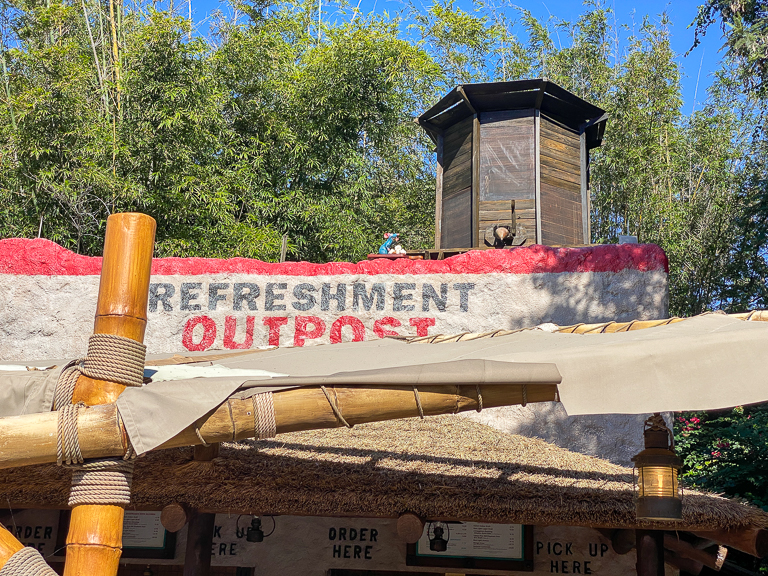 And while they were there, they really wanted to try Dole Whip. There's Pineapple Dole whip and Watermelon Dole Whip too. They loved their swirl! 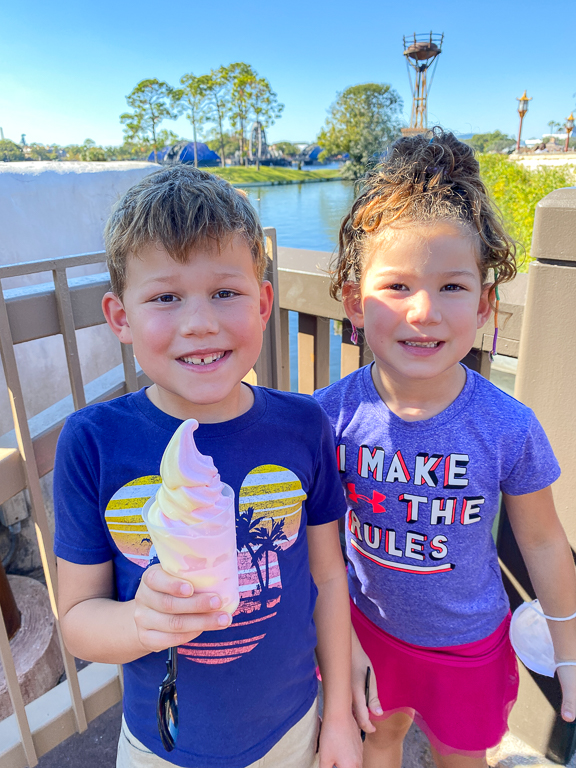 China is one of our last stops. The kids found Remy with a lizard on his nose. 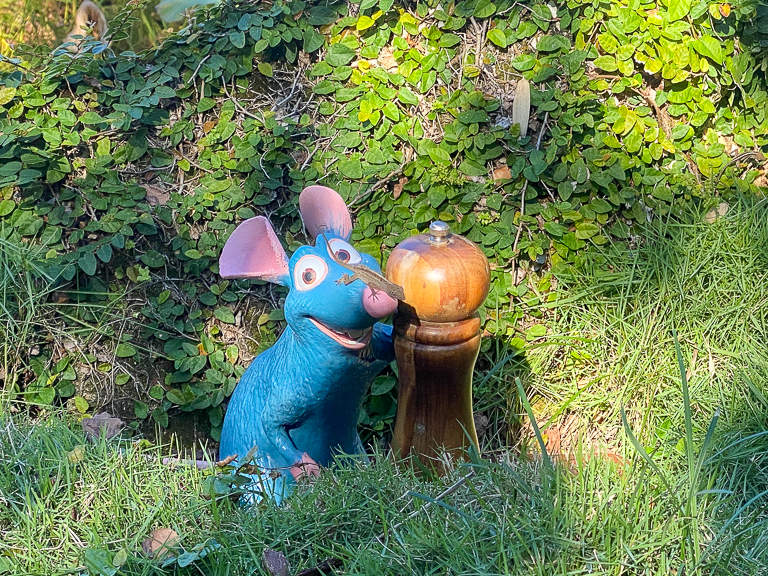 We waited for the lizard to leave to get a good picture. 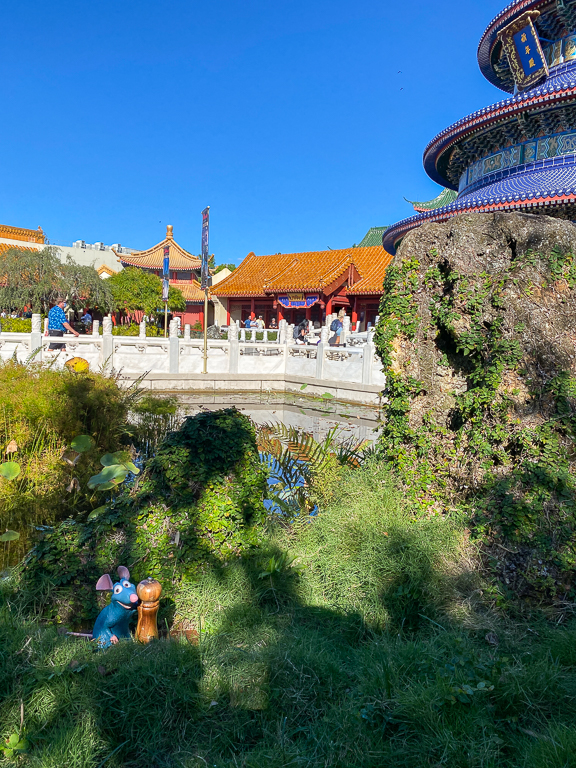 Our very last stop was over in Mexico where Alli spotted Remy across from the pyramid. 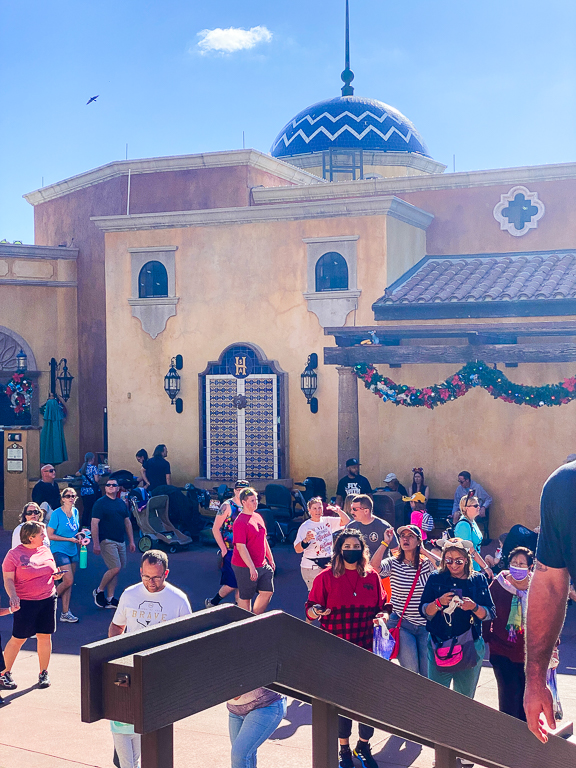 Without the stickers to keep track, Theresa and Alli colored the map on her phone with the different ingredients Remy found. Got them all! 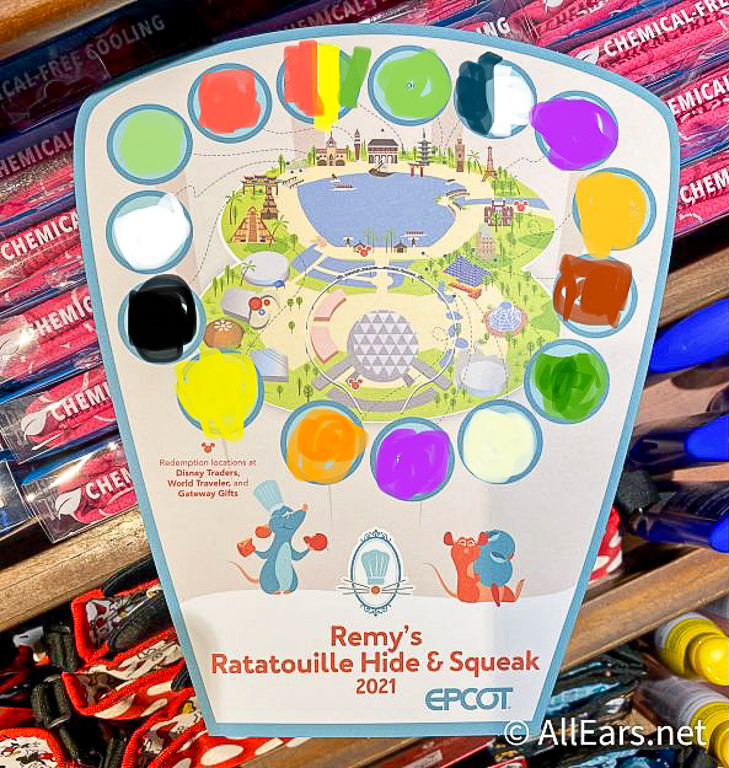 And instead of a cereal bowl as a prize, the kids were both quite happy with Cherry Coke ice cream floats from Club Cool.
Everyone had a fun time wandering around Epcot looking for Remy, and we're looking forward to the next scavenger hunt adventure at Disney World! 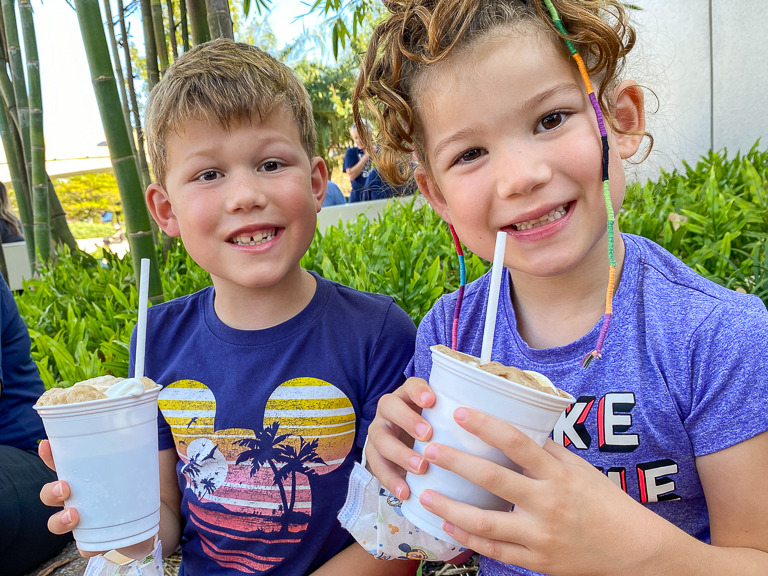