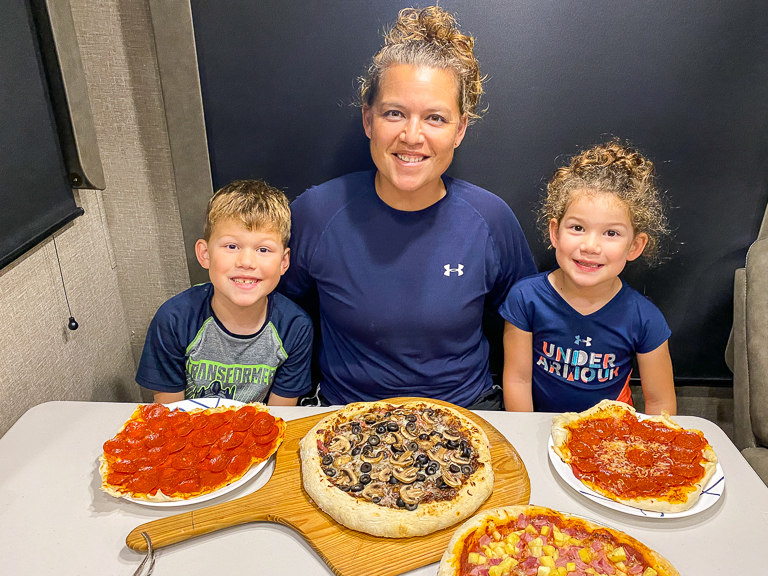 It's crazy how many onions it takes to get a decent amount. This is a small bag of onions, cooked for over an hour, constantly stirring, until they finally brown and taste so sweet!
Since this pizza is for Theresa she gets to pick the rest of the toppings too. Mushrooms, prosciutto, and black olives. Not what I would have picked, but this one isn't for me. 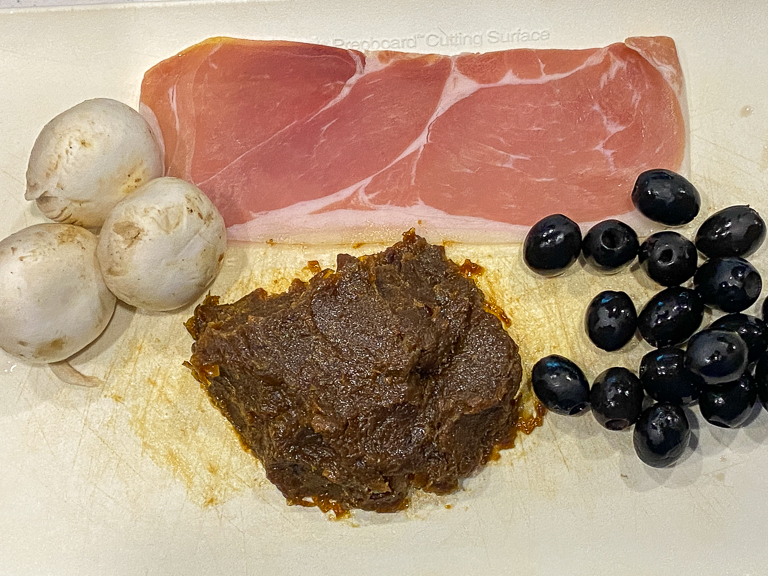 I cut everything up to put onto the pizza. No red sauce here. No, no. Theresa does not like red sauce on her pizzas. She wants to taste toppings, not sauce. 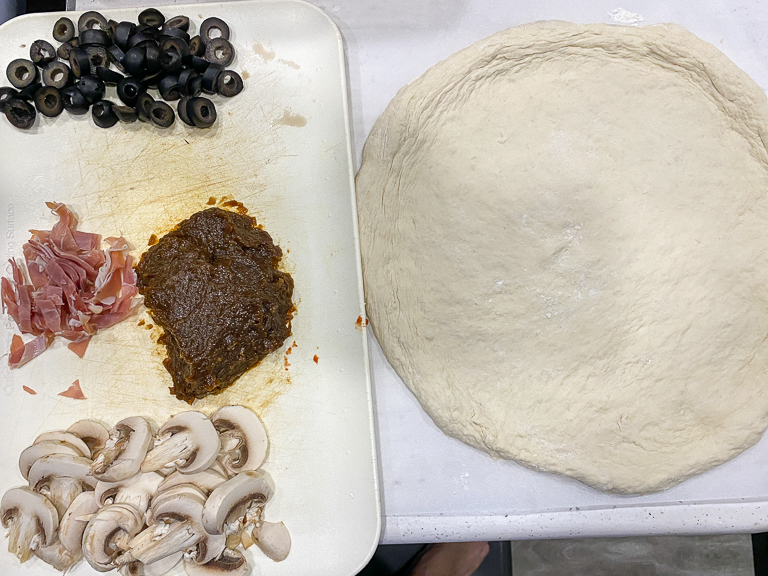 That's a good amount of caramelized onions spread as a base for this pizza. It's topped with delicious prosciutto. 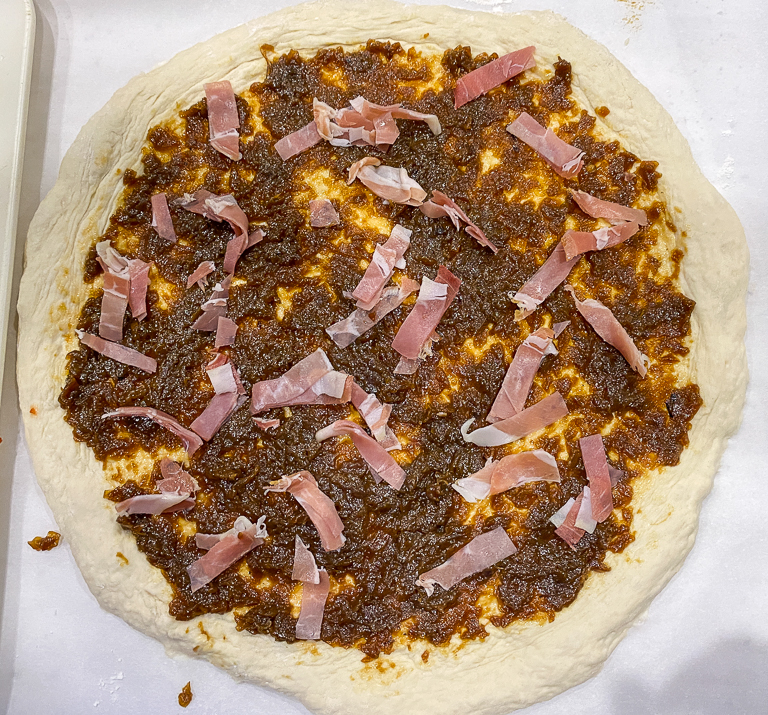 Mozzarella and sharp cheddar went on top of that, followed by black olives and mushrooms. 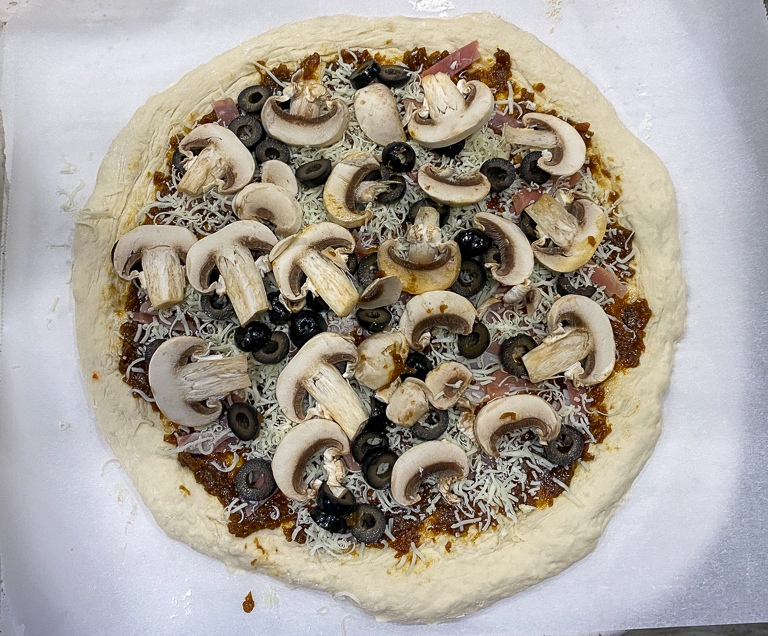 Ian, since mommy is getting her own pizza, do you want anything special tonight?
Ian - Thin crust!
But I didn't make that dough tonight. Just my regular dough. You want me to try to roll that out as thin as I possibly can?
Ian - Yes please! 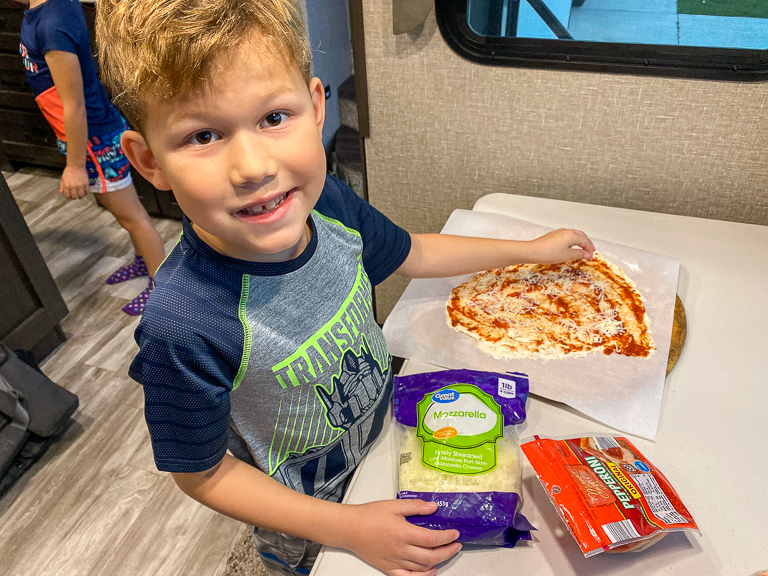 I put the dough between two pieces of parchment and used my rolling pin to make it ridiculously thin for a yeast dough. 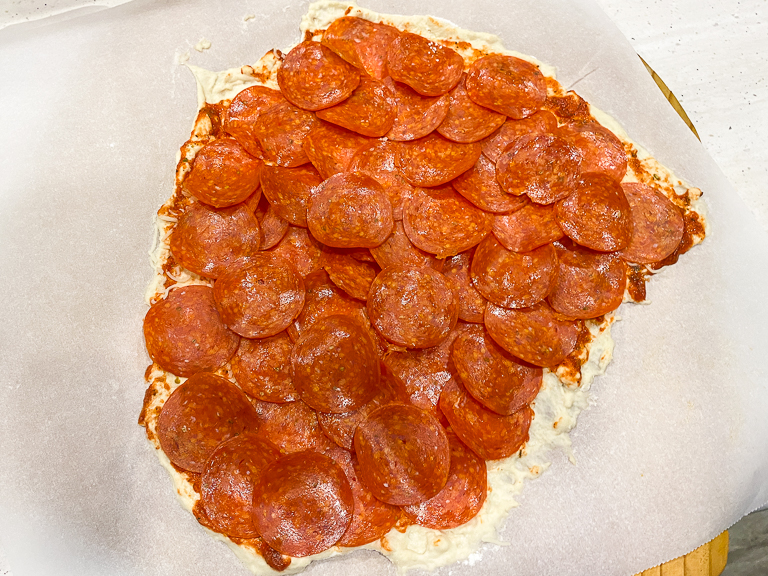 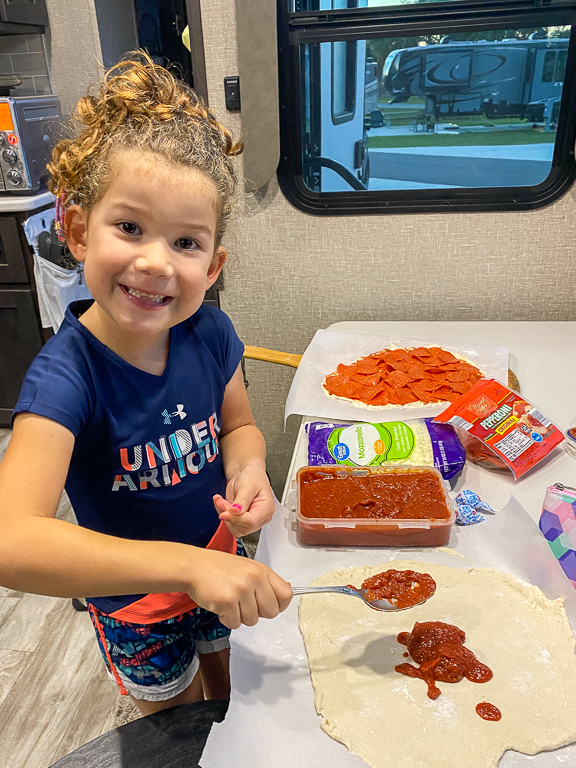 I'll have to work on rolling it thinner. Despite being on top of parchment and dusted with flour, it was pretty sticky. Maybe a spritz of oil will help next time. 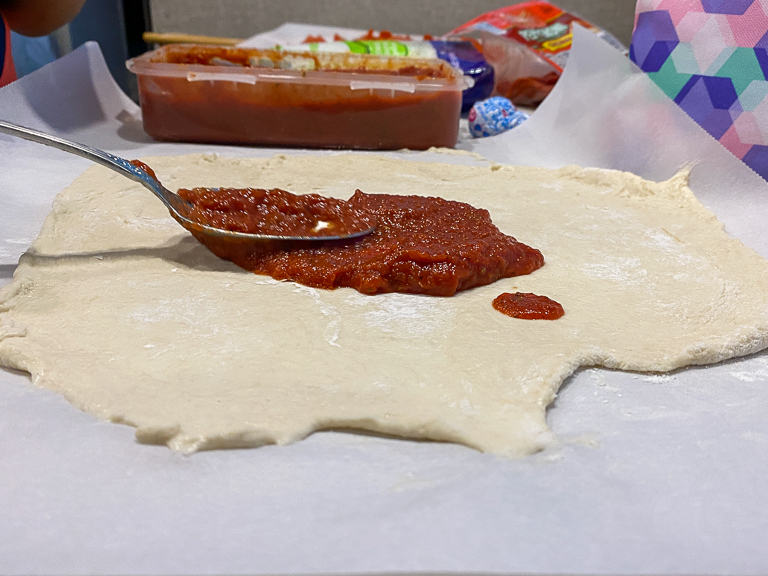 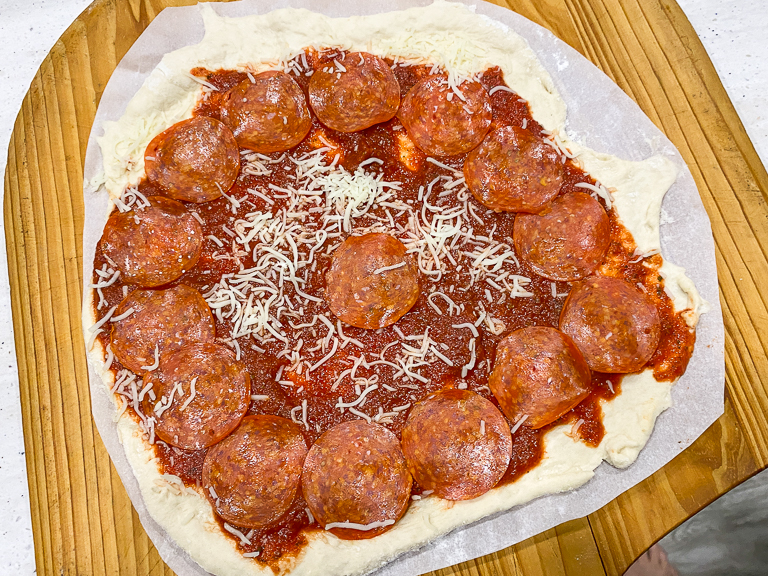 Oh Theresa, despite being covered in mushrooms and olives, that looks tasty! 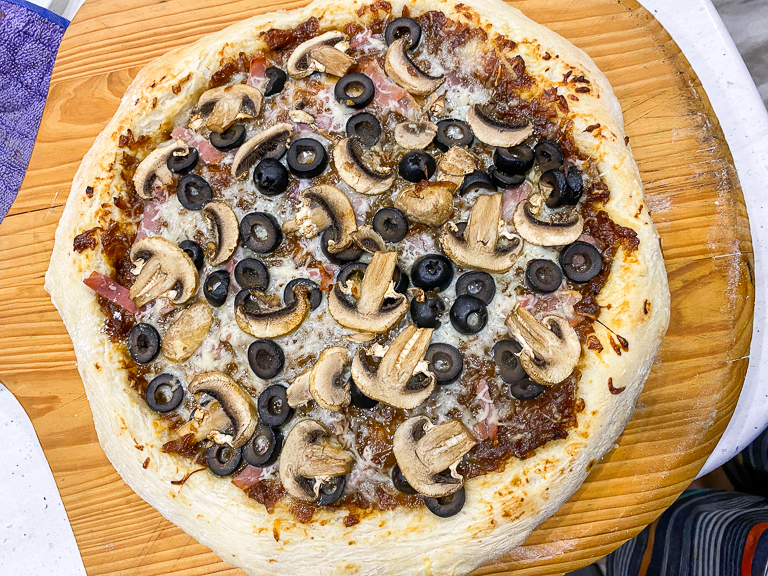 My plate tonight. I made a bonus Hawaiian pizza too. 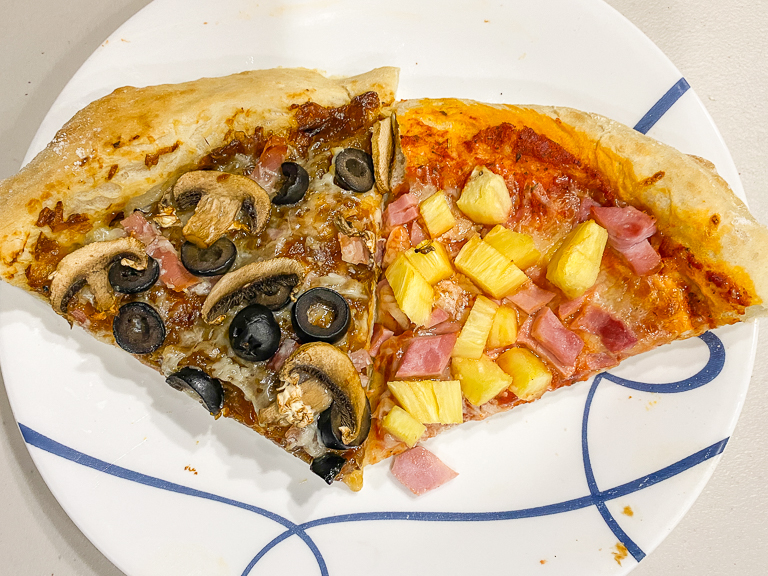 Theresa thought it was great! The caramelized onions give it a rich flavor. Her suggestion for next time (oh, so there's going to be a next time) is to get a stronger/saltier cheese, like the gorgonzola. 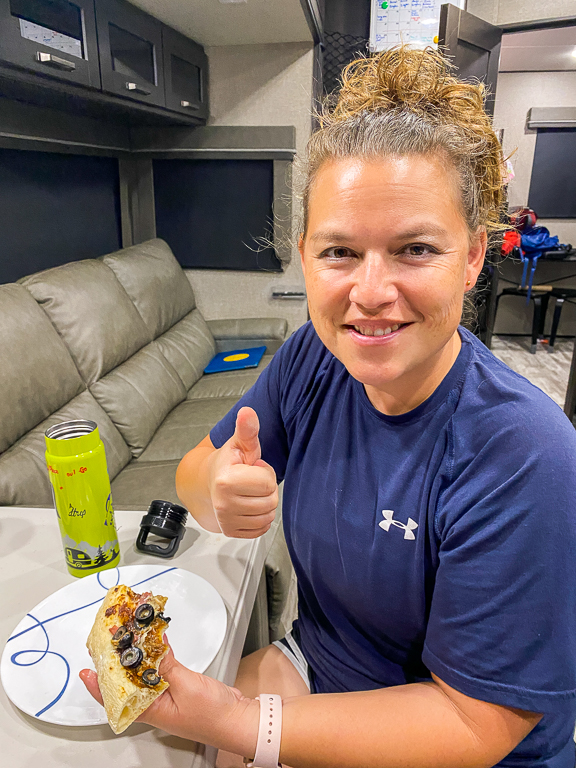 Alli - I want to try it!
Really? For sure!
She loved it! The mushrooms and olives especially. She gladly took any of the toppings that I picked off my pizza. 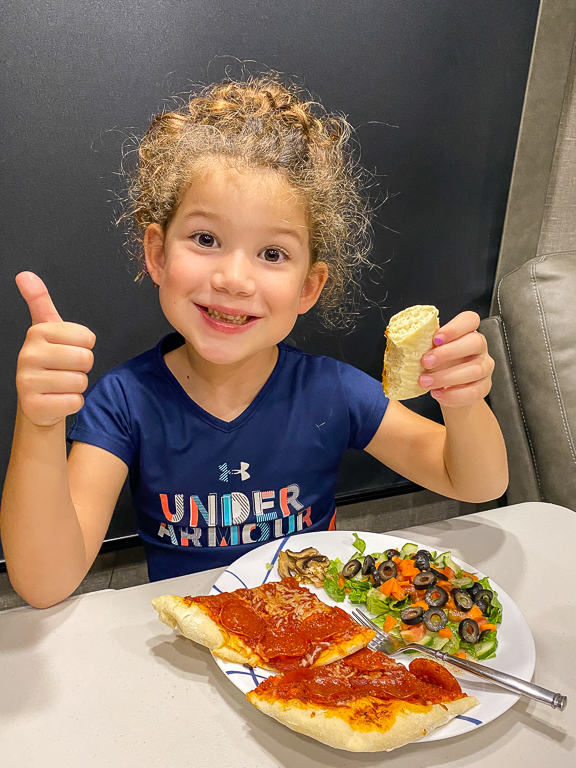 And what do you think about your pizza Ian?
He was a big fan.
Ian - I want you to make this kind of crust every week!
Alli - Me too!
Theresa - I think I would like it with thinner crust also.
I guess I'm the only one who likes regular pizza here. Well despite being a yeast dough instead of a dough leavened with Baking Power, this turned out pretty well and was a hit. Now I really need to get a baking stone or two for my pizza oven to give it a crispier crust for those thin crust pizzas. 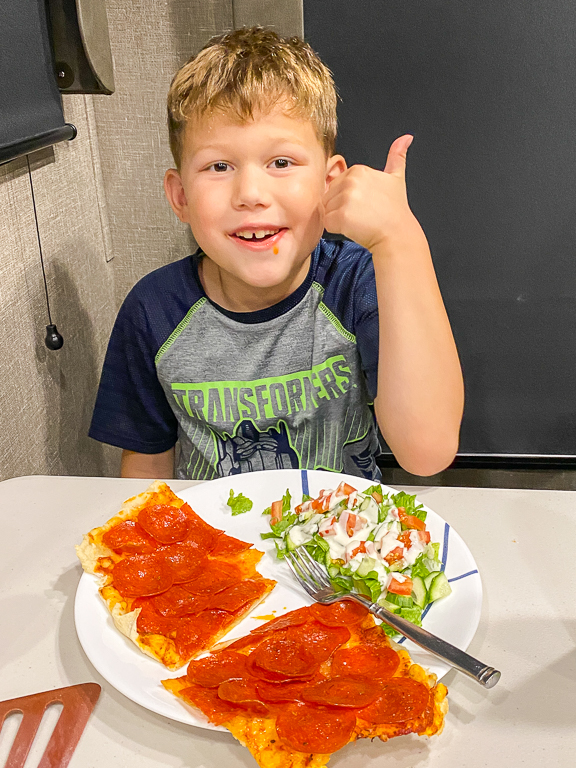