It was amazing seeing all three waterfalls of Niagara Falls, but there's a little bit more to Niagara Falls State Park that we want to explore. There's walking paths all around here and we've got plenty of walking miles that we're trying to get in this year. Let's go explore! 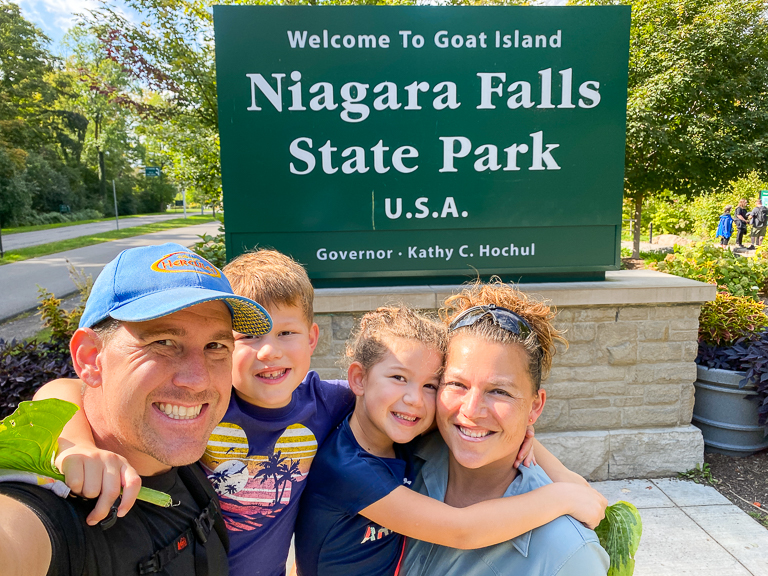 Just behind Horseshoe Falls, on Goat Island, is a trail over to Three Sisters Islands. Let's go check it out! 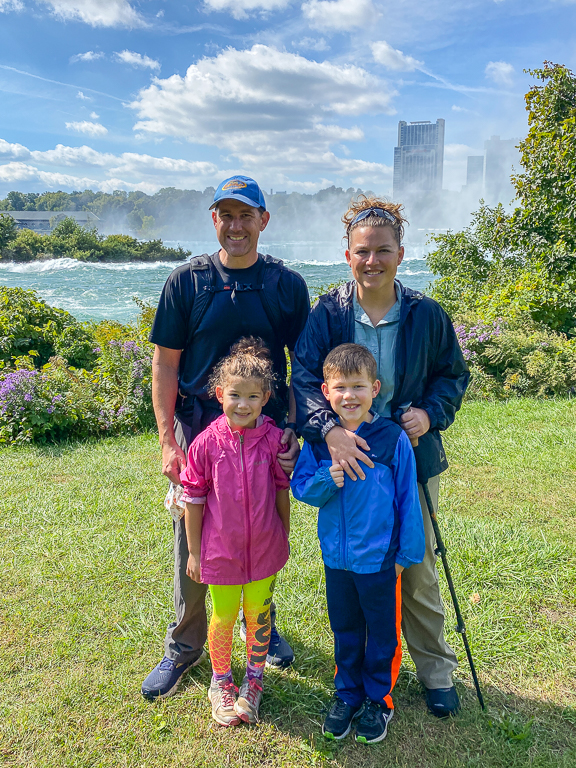 Along the way we stopped at a bench overlooking the Niagara River and ate lunch. It's their first time trying SpaghettiOs and both of them thought they were yummy! That'll be an easy meal to pack in the future. 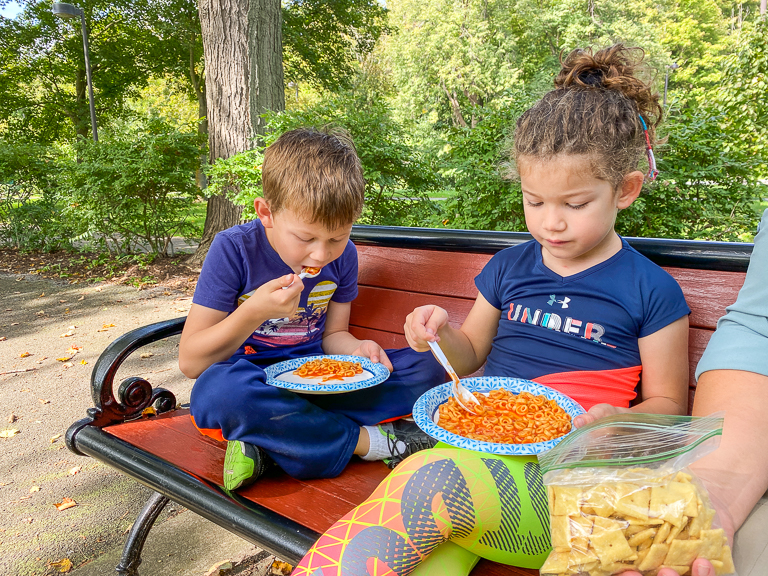 Ian found a couple leaves the two of them would carry them around for the rest of the day. 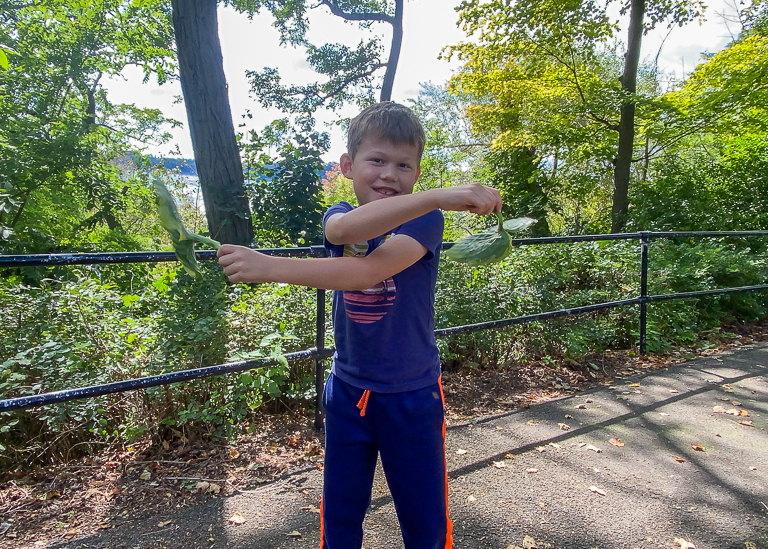 At the Three Sisters Islands are footbridges that take you further out into the river. 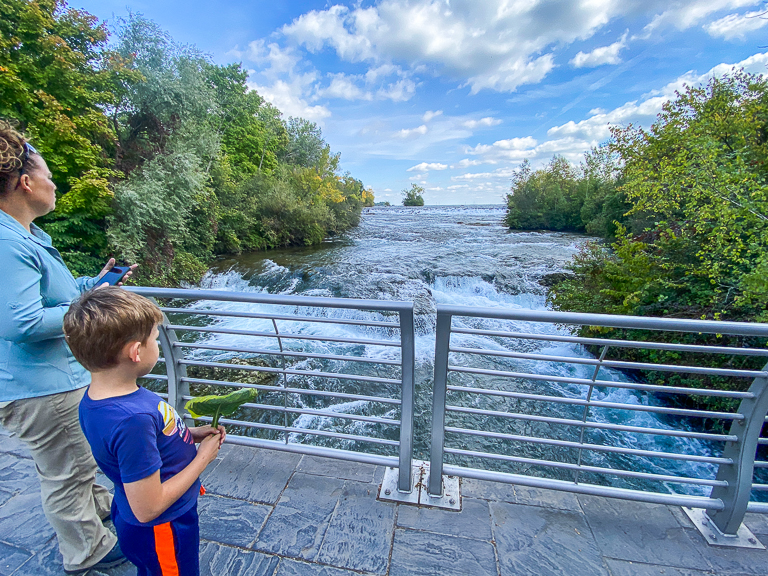 And in the distance you can see the mist that's thrown into the air with the crashing water. 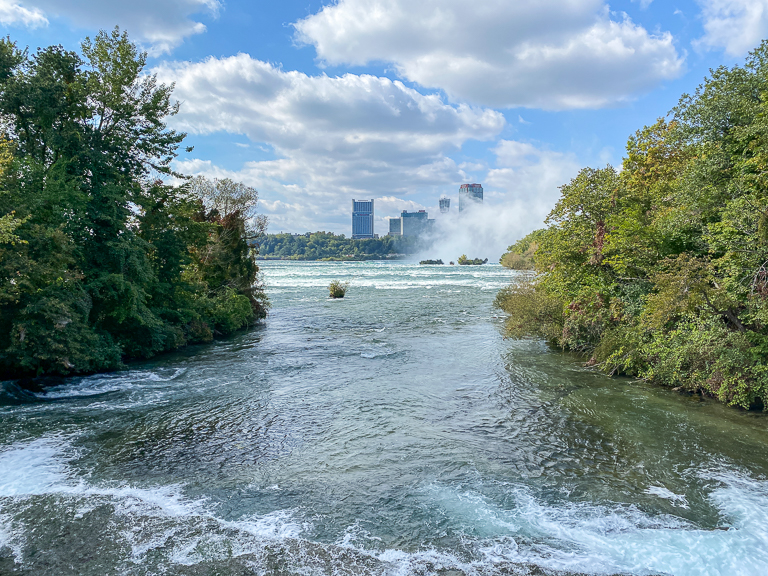 They're having fun walking around and seeing everything here. 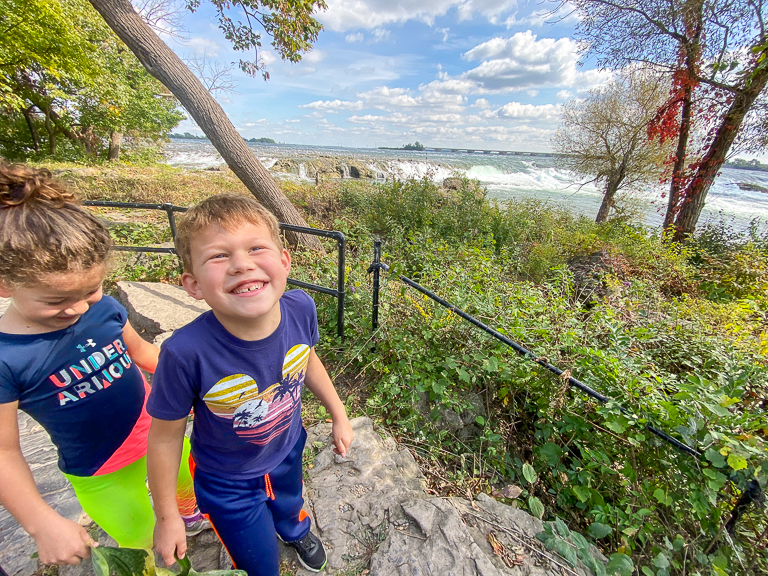 There's a railing overlooking the water. Theresa is channeling Titanic with Jack and Fabrizio at the bow of the ship. 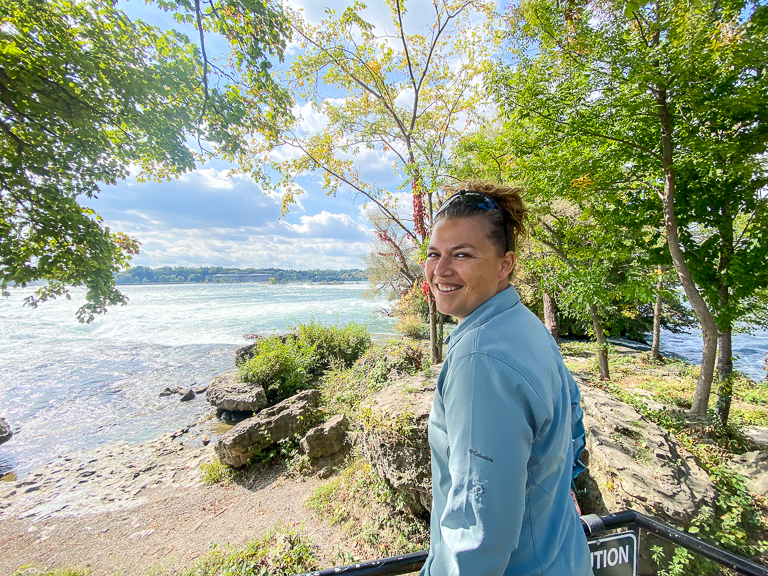 I'm the King of the World! 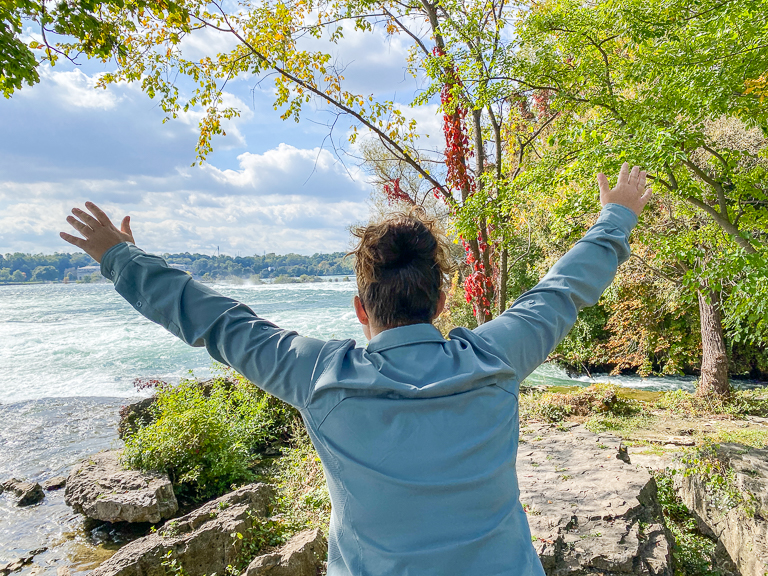 Are these Canadian Geese, even when they're on the American side of the border? 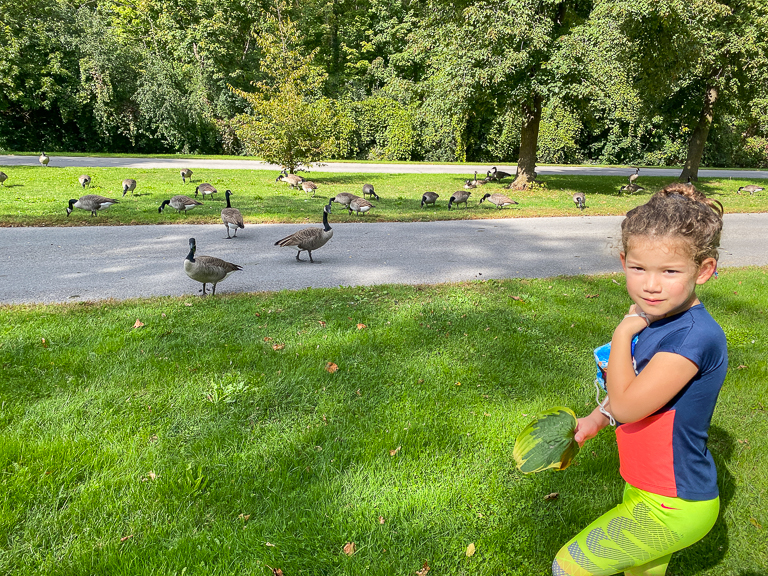 After walking along the outer loop of the island, we took another pass by all the waterfalls on the way back to the truck. 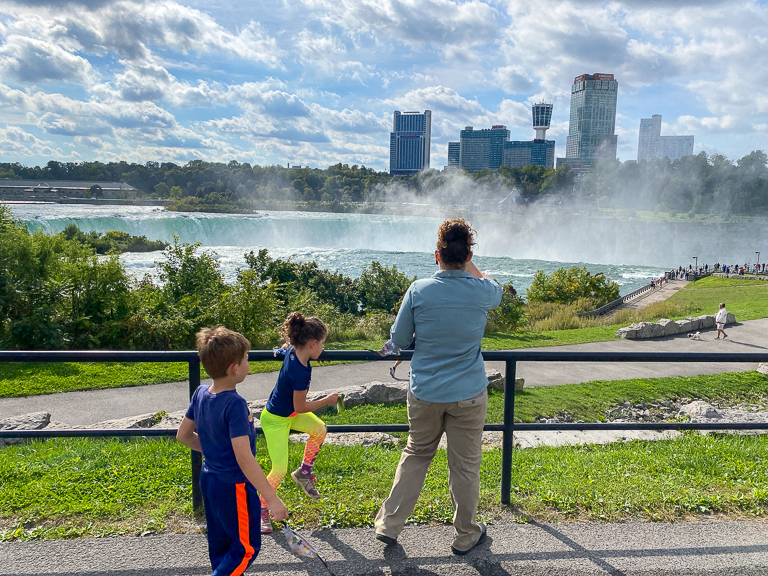 The kids are loving all the rocks there are to climb on top of. 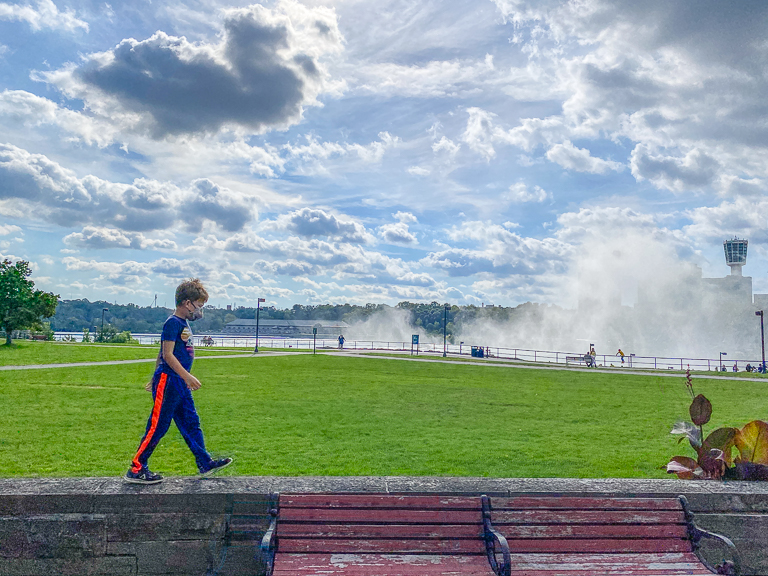 After walking the entirety of the falls, this point, called Stedmans Bluff, which overlooks the American Falls is Theresa's favorite. I agree, it's beautiful. 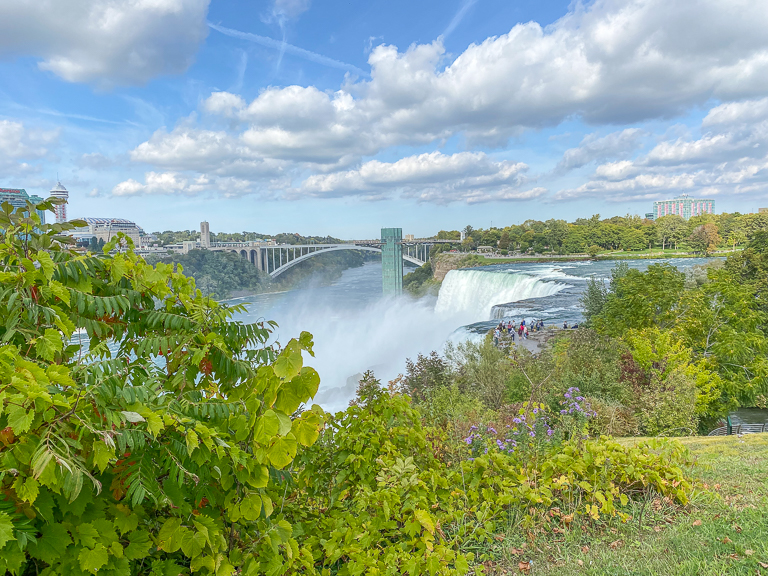 And we're not the only ones who think so. During our visits here, we saw a few quick ceremonies, on a rail, overlooking the falls, plus a couple marriage proposals as well. 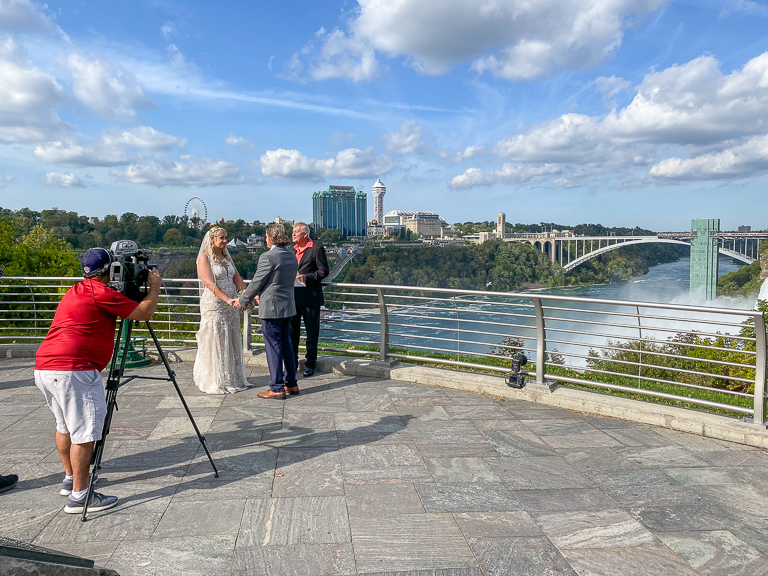 A common question for this whole trip would become "Can I climb on those rocks?" 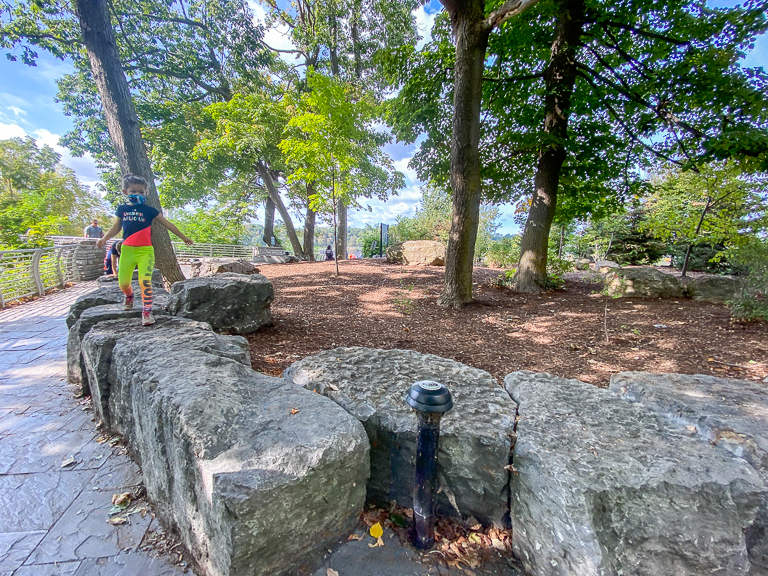 In almost all the cases, the answer was yes. I remember loving climbing all over rocks when I was little. 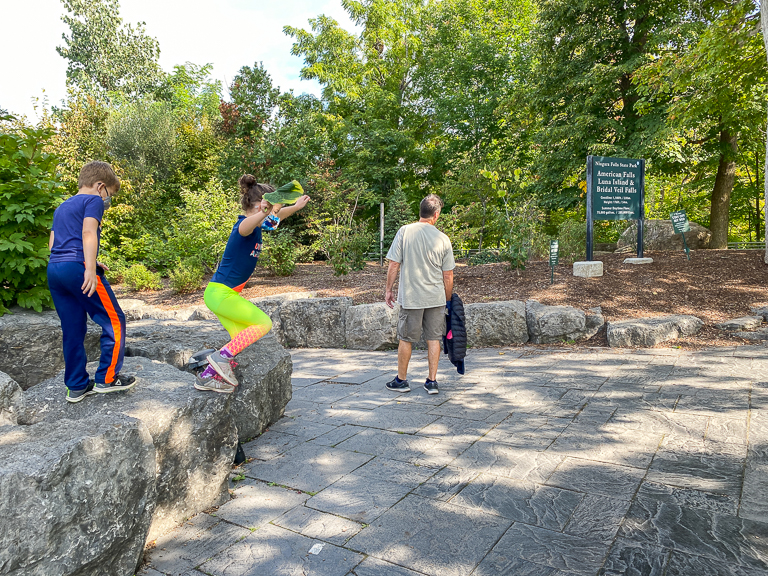 And it doesn't matter that we've been walking and on our feet for most of the day, they are still going strong! 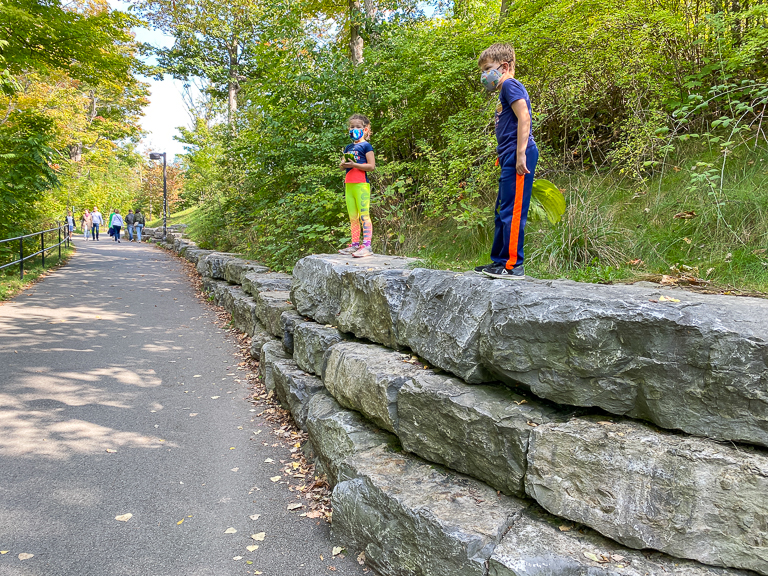 Before we head back to the RV for dinner, just one more snack in view of the waterfall. 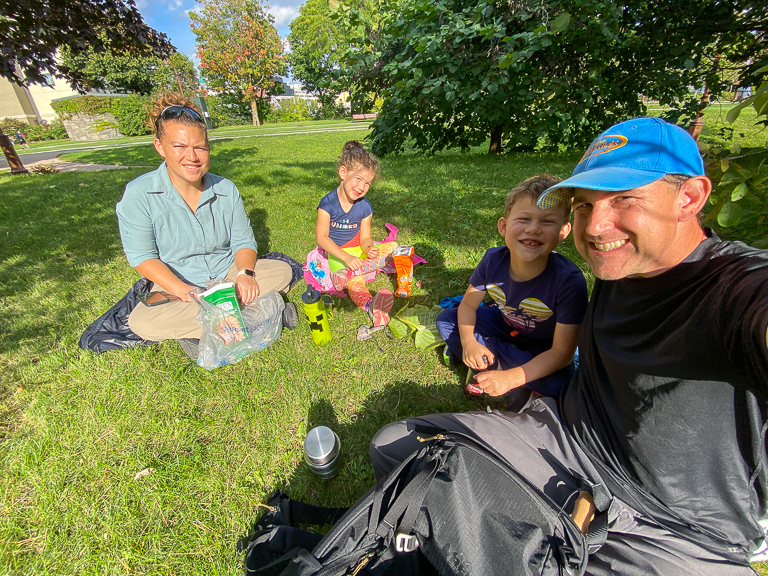 Walking back to the car, we've put in quite a few miles!
It's just a 20 minute drive back to the RV at Four Mile Creek campground. We made dinner and hung out for a little while, but one of the best things about being on the road is that we're not stuck with any set schedule. 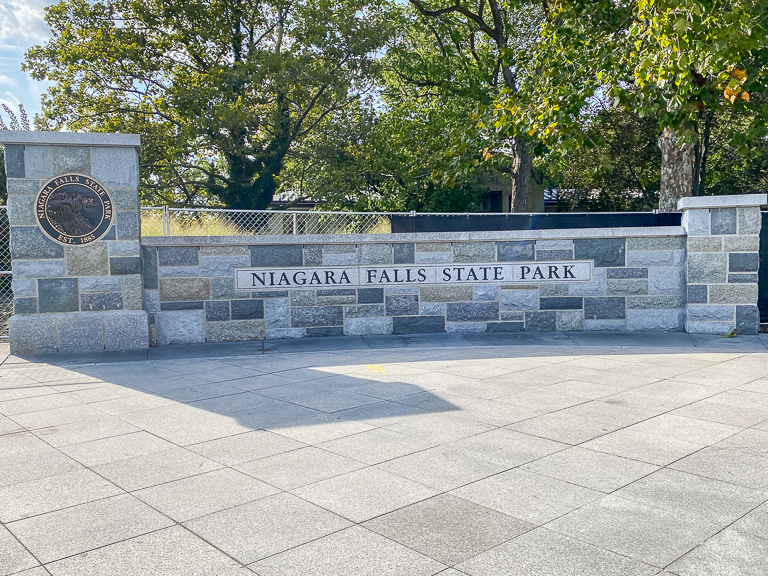 If we want to stay up late on a school-night to go out and do something fun, that's perfectly fine!
Every night at dusk, all year long, is a light show called Illuminations that projects onto all three waterfalls. Kids, would you want to go see it? Of course the answer to staying up late is always a cheerful YES!
We parked in the Discover Center parking lot and walked to the Falls wearing our light vests. 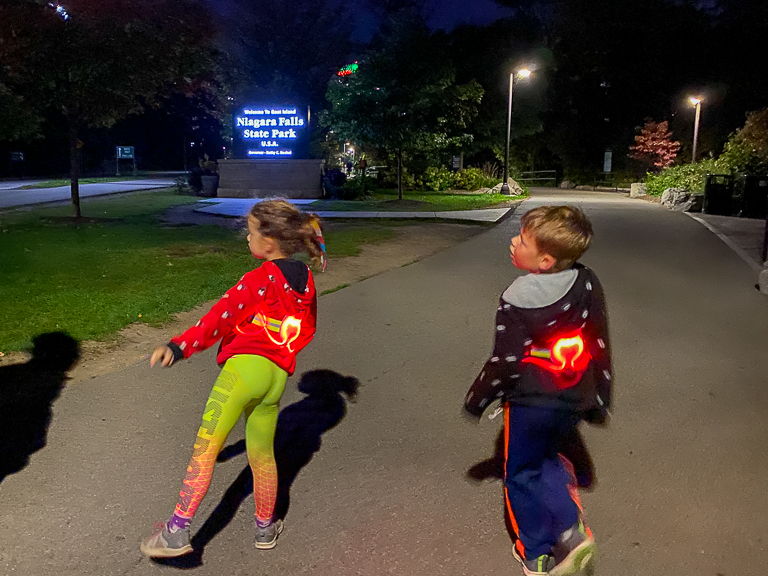 As we were walking up to it, the American Falls were rotating through Red, White, and Blue. Very patriotic. We crossed the pedestrian bridge over to Goat Island and further to Luna Island to get a closer look. 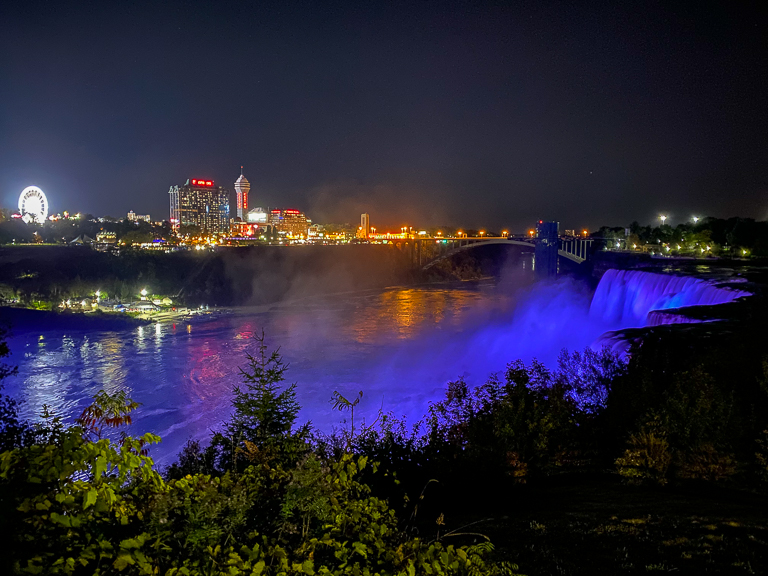 Theresa took a sequence of pictures, trying to capture all the different colors. The previous lights were replaced in 2016 with brighter and more colorful LED lights. They can go through so many different colors!

From the American Falls, we all walked to Horseshoe Falls. Along the way, wow, there's a whole lot of skunks here! The kids and I must have seen 6 different ones. They just went about their business. Not getting too close to people, but not running away if you happened to be walking beside them either. We saw some people on a bench, and a skunk walk under their legs. Gave them quite a nice surprise. The kids like to have an "Animal of the Day" and today the most unique one was a skunk! 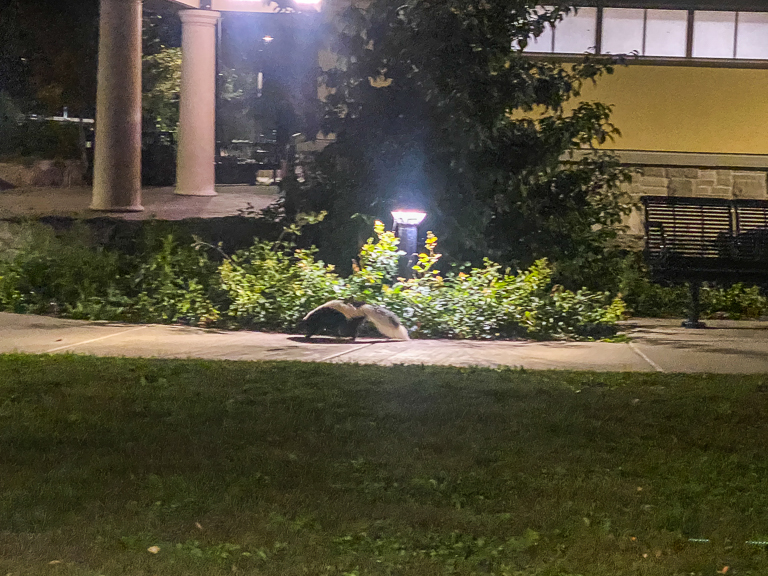 The American Falls was beautiful, but Horseshoe Falls is even more spectacular. 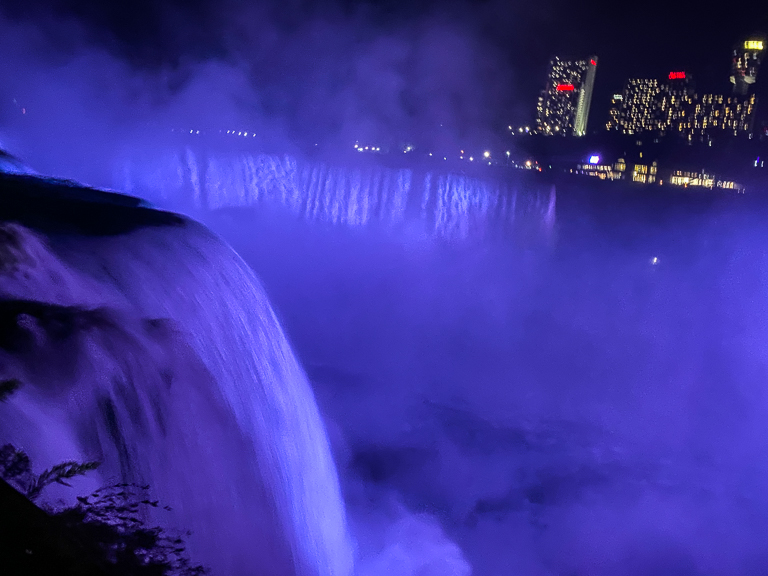 It's beautiful at night. It reminds me a bit of Disney's World of Color in Paradise Bay. 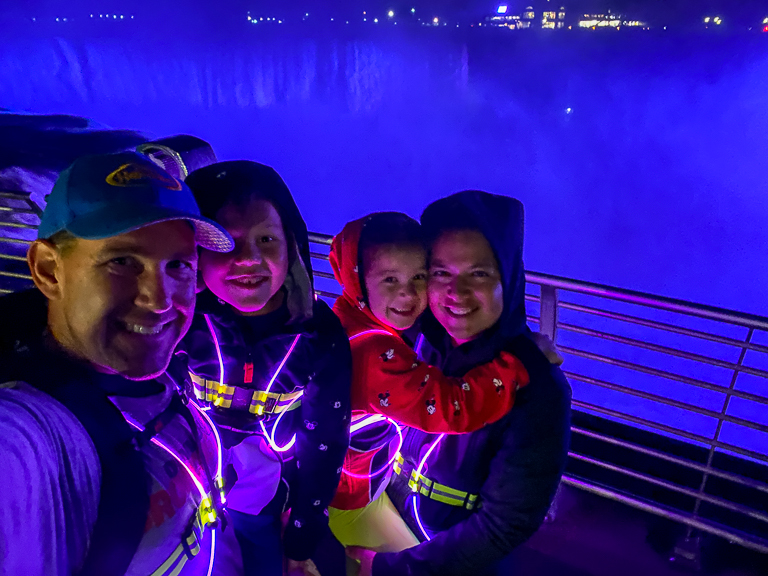 Theresa had the great of idea of bringing a picnic blanket, popping a few bags of popcorn, letting the kids get a few pieces of Halloween candy, and making a fun evening of it all. The lights were awesome! What a wonderful rainbow world of color! 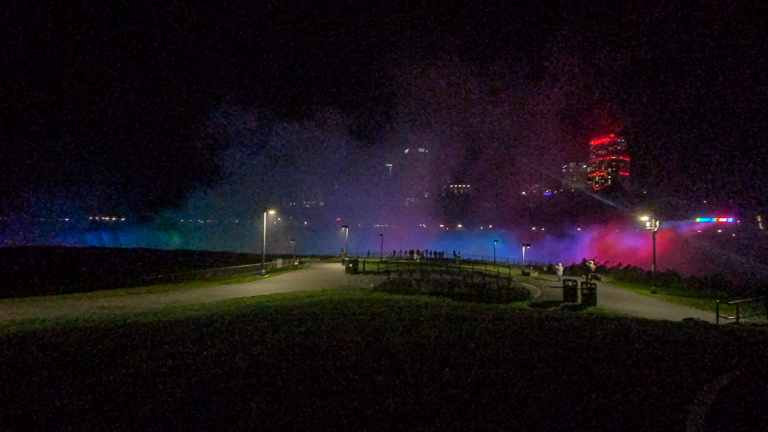 Ooh, now we're getting to the Villains portion, where the water is turning blood red! 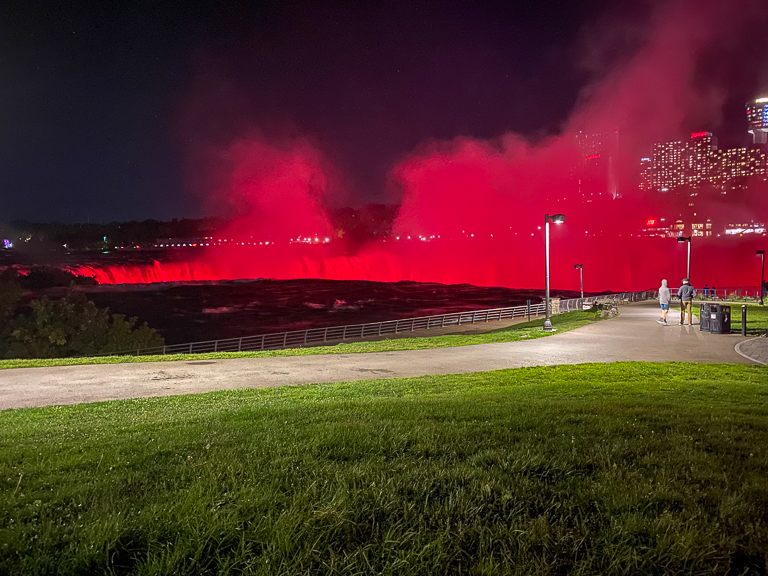 It was awesome, just hanging out here with the family I love, watching and listening to the water and the lights. Nothing else has to be done right now. These are the moments I want to hold onto and remember.
Walking back to the car, the kids have been amazing. We logged about 10.5 miles total, which will help to put a dent in our walking miles! 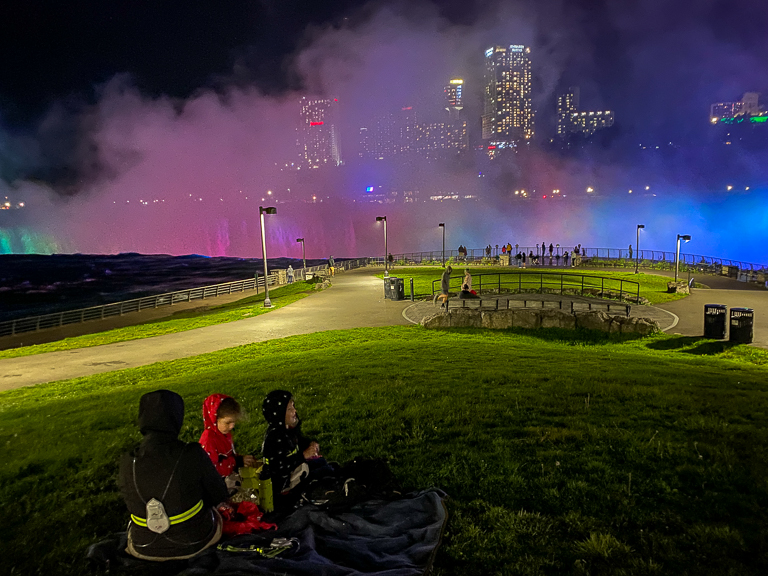