There's a new Oreo flavor for us to try today! I got a heads up about this one over the summer from a friend ahead of time, actually while we were at another apple orchard in Kansas! It took a while to find these Limited Edition Apple Cider Donut Oreos. Theresa looked around all over our area during our travels and eventually found them at a Target in North Carolina.
There's only one more thing left to do. Find some real Apple Cider Donuts to taste them against! 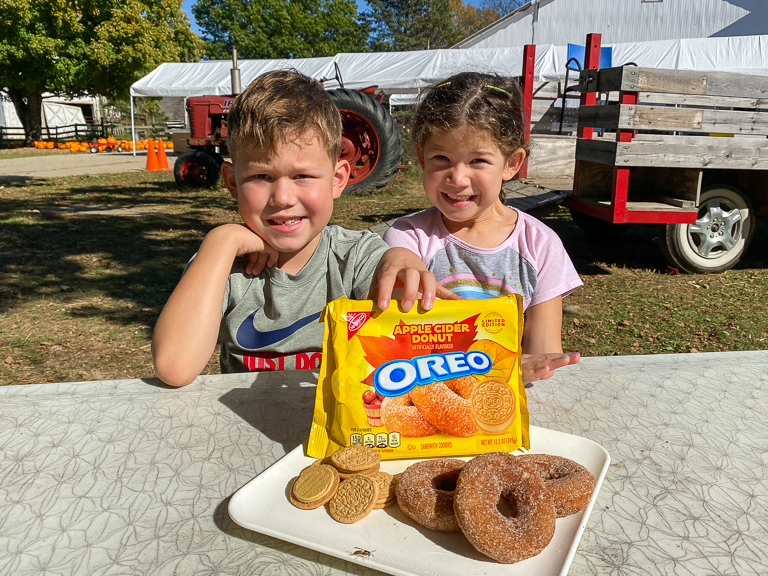 There were a few Apple Orchards we stopped at ahead of this, but finally we decided on Irons Fruit Farm in Lebanon Ohio! 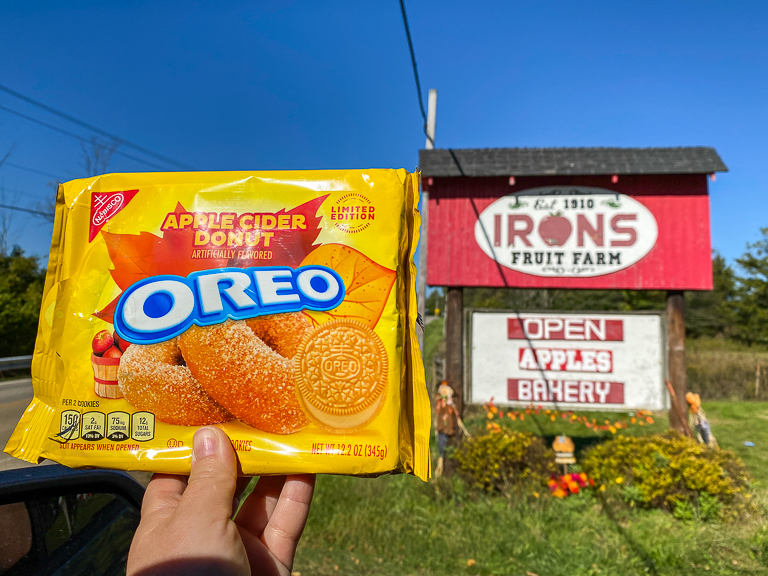 The kids played around on a few of the "toys" that are on display. Like a full size tractor. 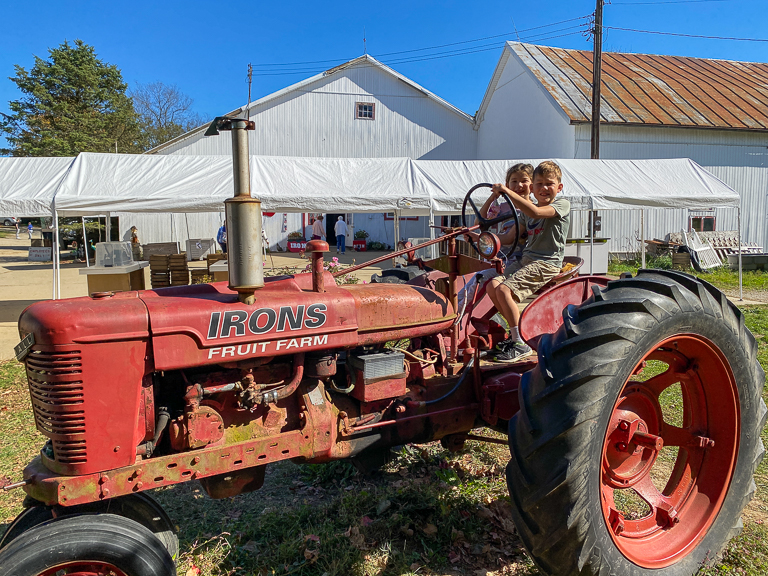 These hay rides run on the weekends and take people to the corn maze and pumpkin patch. 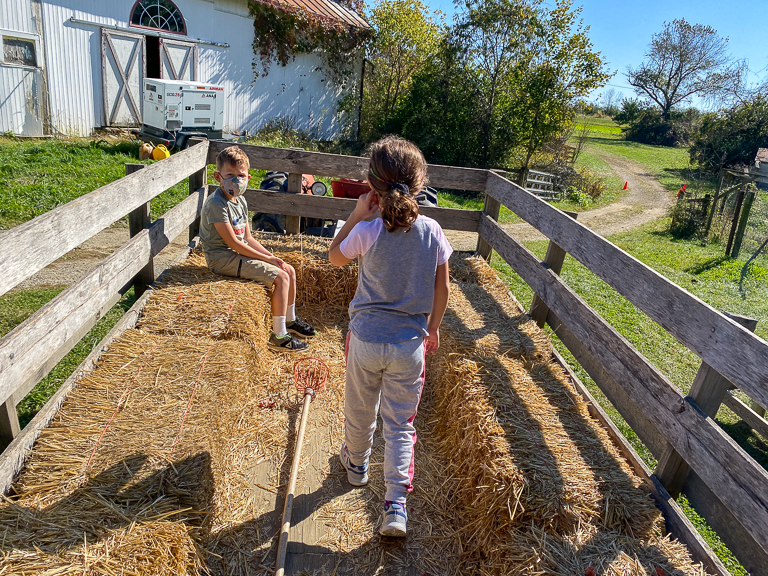 But today is a Wednesday and there's no hay rides. 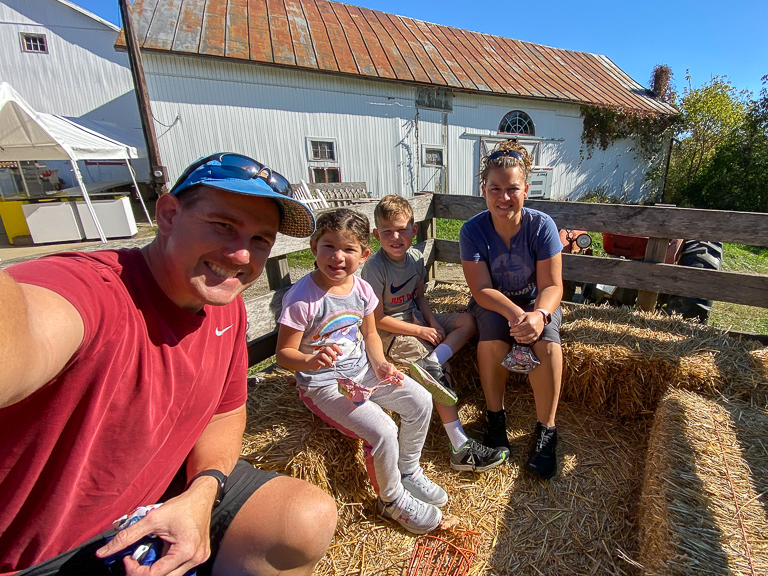 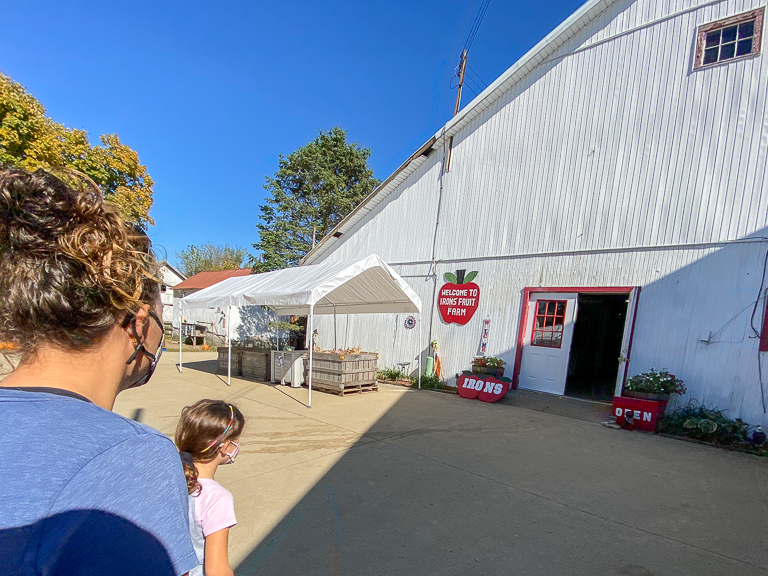 I wish there were you-pick orchards here, because we would have loved to get out and see all the trees and pick apples. They did have quite a few varieties, over 10 I'm guessing, already bagged up and ready to buy. There's also local honey, candies, popcorn, and other treats to buy. 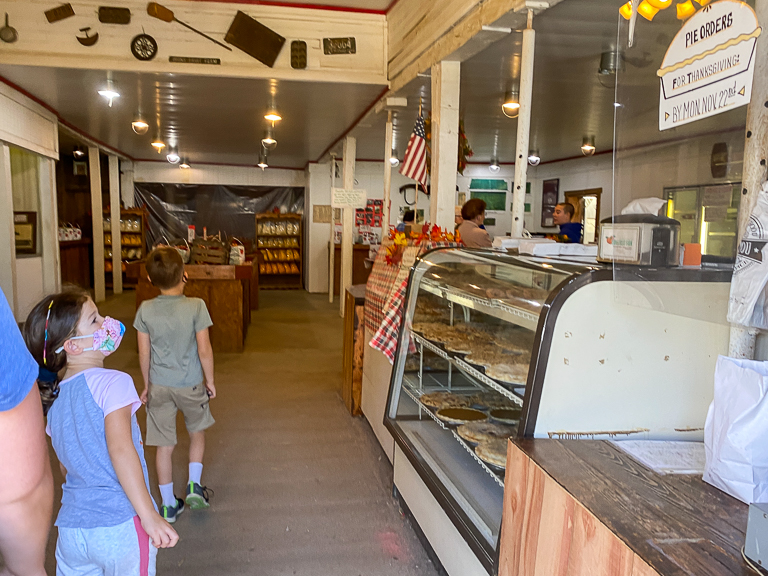 I was really hoping to get a gallon of cider to drink along with our donuts, but this is what the cold case looked like. No cider at all! I asked at the main counter and heard that they are running very short staffed, sometimes only 4 people. It's a lot of effort to crush, extract, and bottle all the cider, and so they only get it on the weekends. 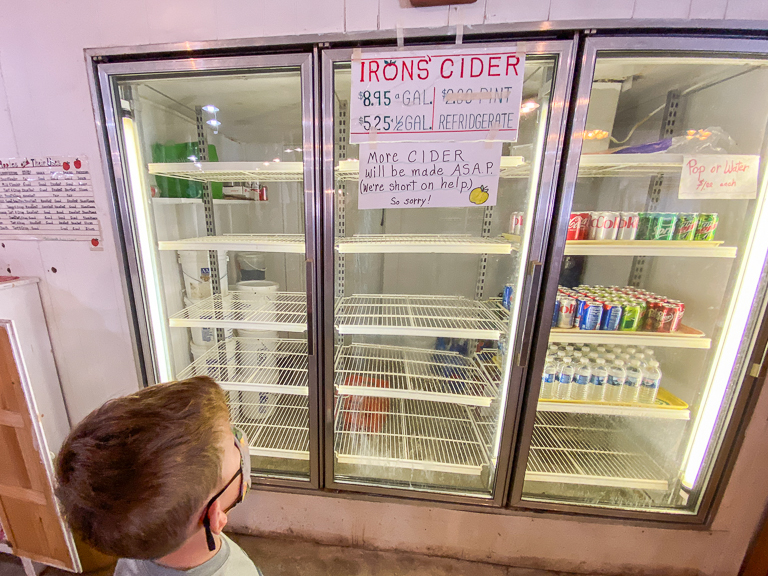 Ah, here is where the delicious smell is coming from. In this closed off bakery section, they are hard at work frying the next batch of donuts. 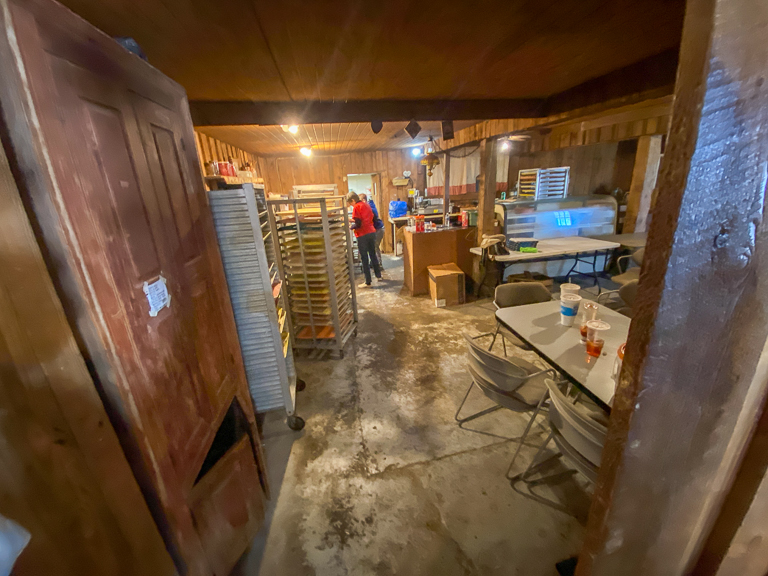 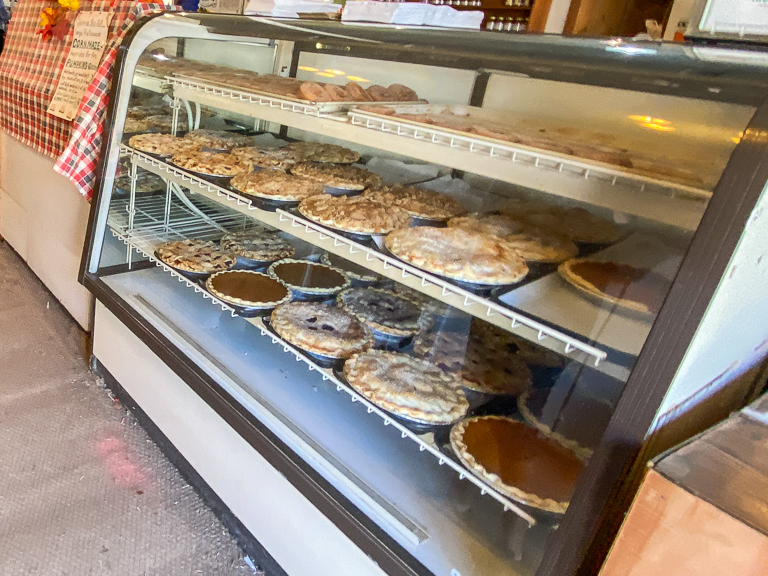 I picked up a half-dozen Apple Cider Donuts and we took them outside to eat with our Apple Cider Donut Oreos. We can see that the inside of the Oreo is a single layer of creme filling.
The Oreo website describes them as "Cozy up and enjoy the sweet flavors of fall with OREO. Inspired by the popular fall treat, these limited edition cookies deliver the feel-good flavor experience of sweet apple cider donuts. The classic combination of wafer cookies and OREO creme makes for a comforting autumn treat!" 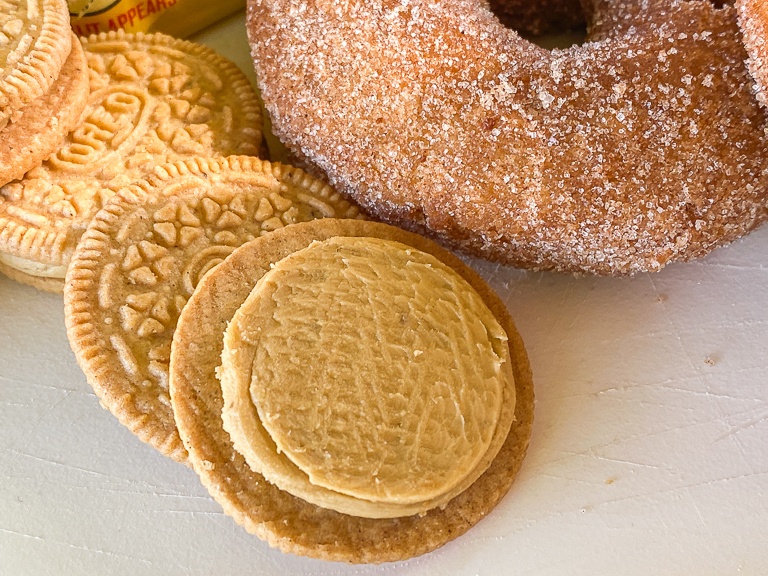 Let's give this Oreo Cookie a try! First, the smell. It doesn't smell like an apple cider donut. It has a light artificial apple smell, maybe a light cinnamon to go with it, but faint.
Tasting the cookie, it doesn't quite taste like a Golden Oreo to me, but has that light cinnamon flavor to it. The creme filling has crunchies in it! Is that sugar crystals? Maybe like the outside of how all real apple cider donuts should taste? But the rest of the filling, what's that flavor? Artificial apple? Something else? 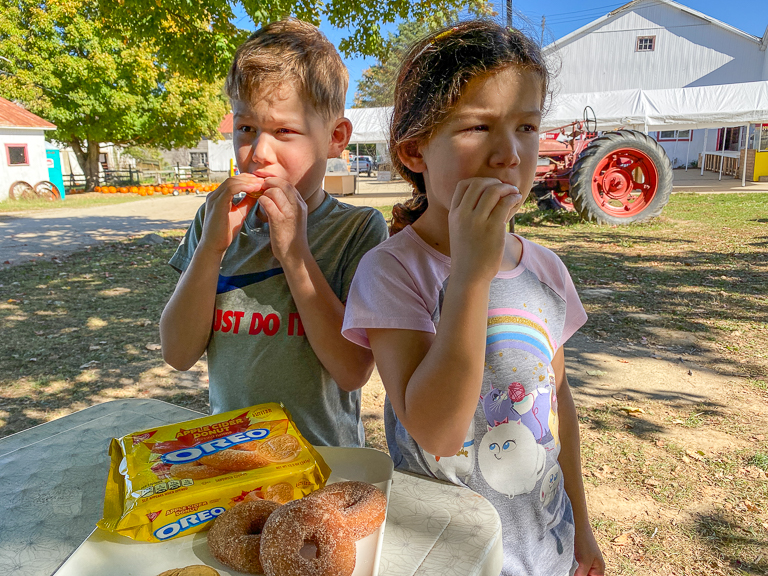 Theresa hates them.
Theresa - These might be the worst Oreos we've tried. And if you gave them to me without telling me what they were, I wouldn't have any idea they were supposed to be Apple Cider Donut flavored.
They aren't my favorite either. They aren't terrible, but I agree with Theresa, they aren't a good representation of Apple Cider Donuts.
Ian thought they were delicious. 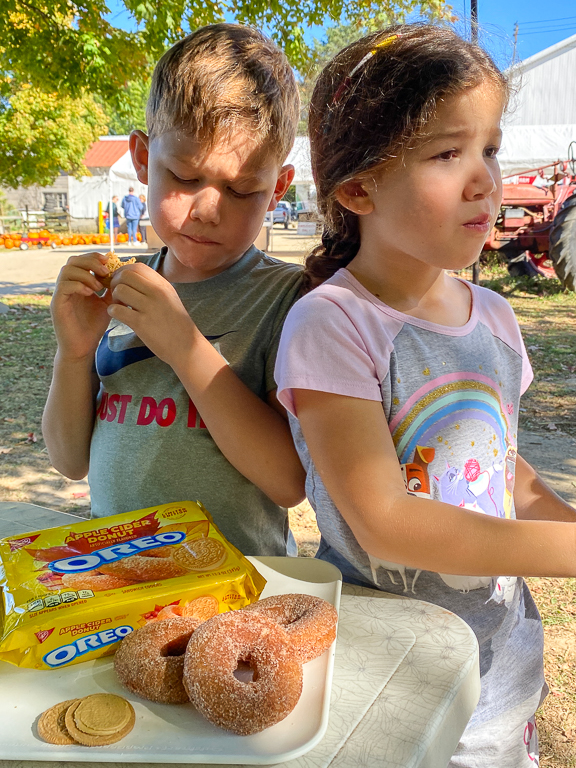 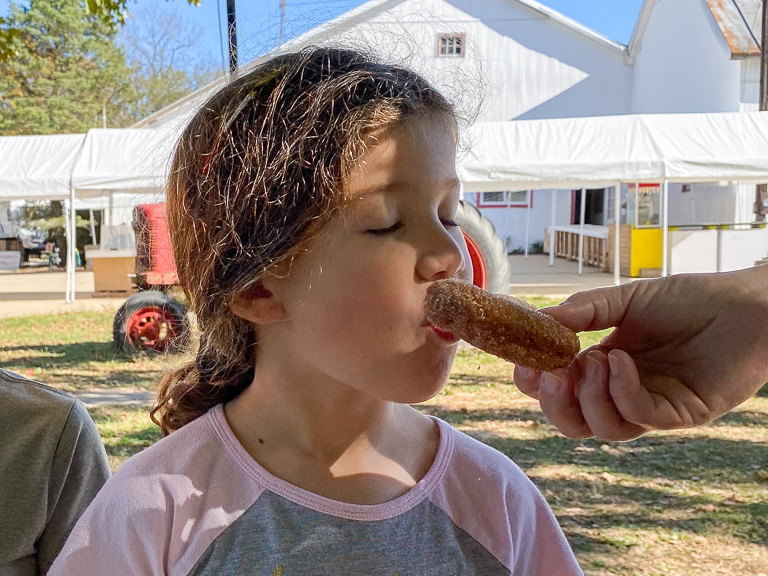 The texture of the donut was surprising. I'm used to these being a lot more cake-like donuts. These seemed almost like a raised yeast donut. Very light and fluffy on the inside. The outside was appropriately coated with cinnamon and sugar, like all good Apple Cider Donuts should be. 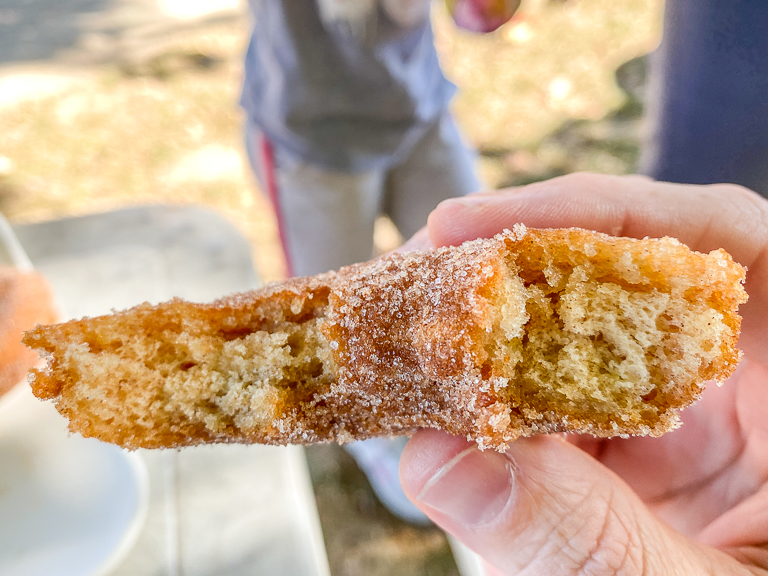 I thought they were great donuts. Much better than some of the others we've tried.
Ian prefers the Oreos. The rest of us liked the Irons Fruit Farm Apple Cider Donuts better. 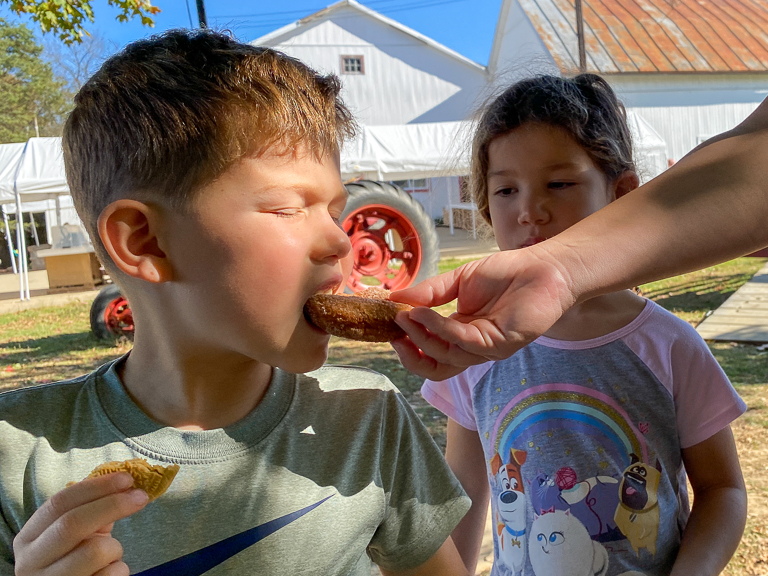 And the bees? The bees liked everything!
The kids were ready to get back to the truck after they wouldn't stop leaving us alone! 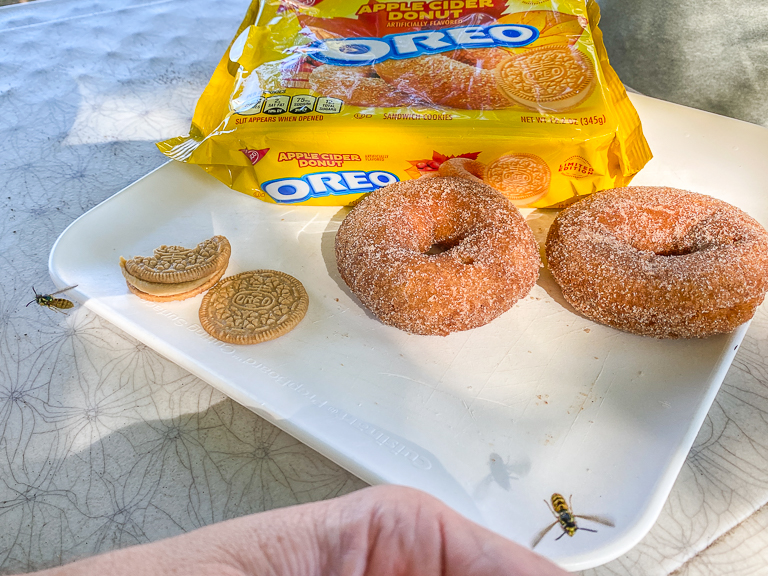