It's time for another big taste test! This time I searched for every single flavor of Frosted Flakes cereal that I could find. In the end, I found 7 unique flavors to compare! 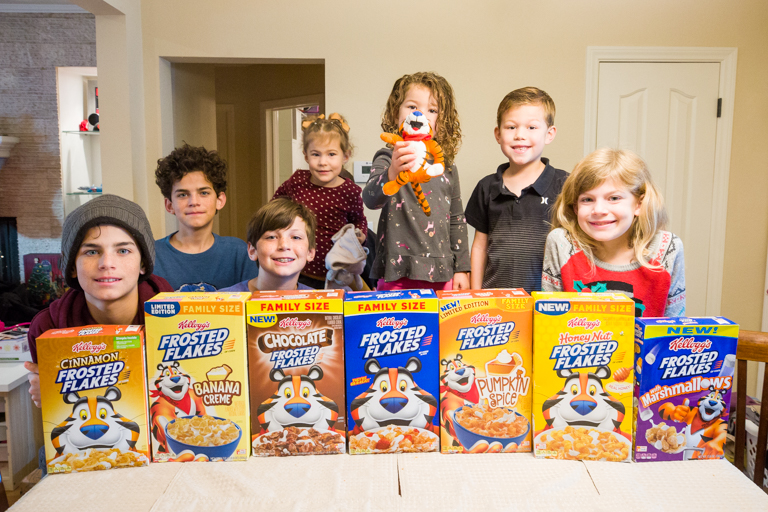 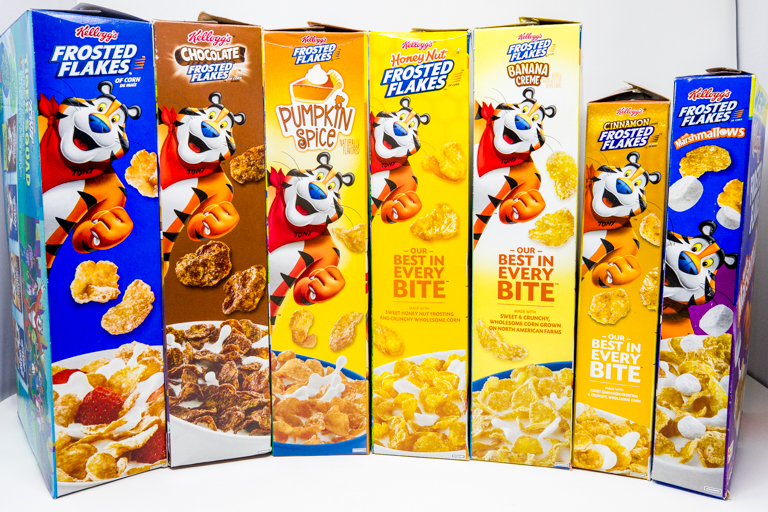 It all started with this box of Frosted Flakes. That cute plush Tony the Tiger is from 1997. I don't remember if it was a mail-away item or what, but it was still in my room when I went home for a visit. I knew he'd have to come back for this taste test.
So it wasn't the front of the box that started all this. 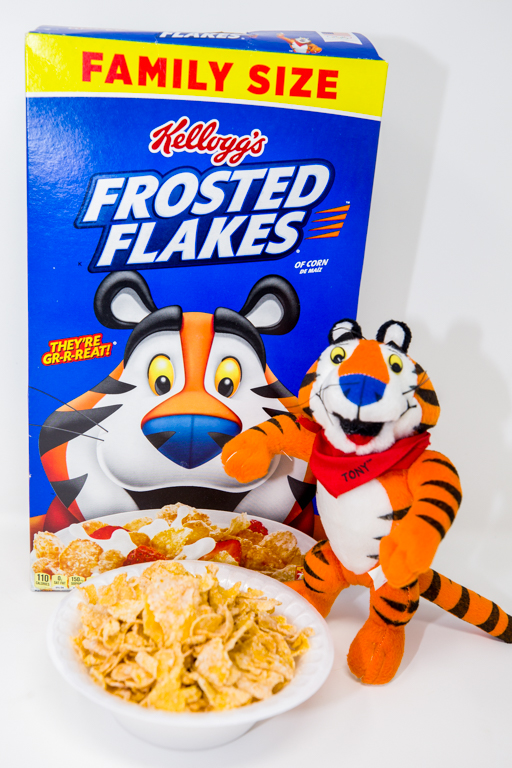 It was the back. Look at them, taunting me with all their other flavors. Well if there's at least 4, I'm going to need to find them all. I've only ever tried the original Frosted Flakes. 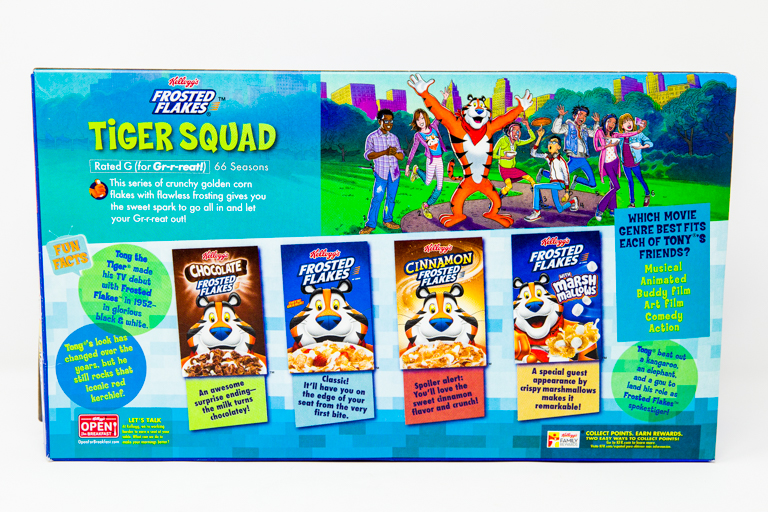 First up were the Chocolate Frosted Flakes. In my mind I was thinking it would be more like Cocoa Krispies, but these look like original corn flakes that have been dusted with chocolate powder. 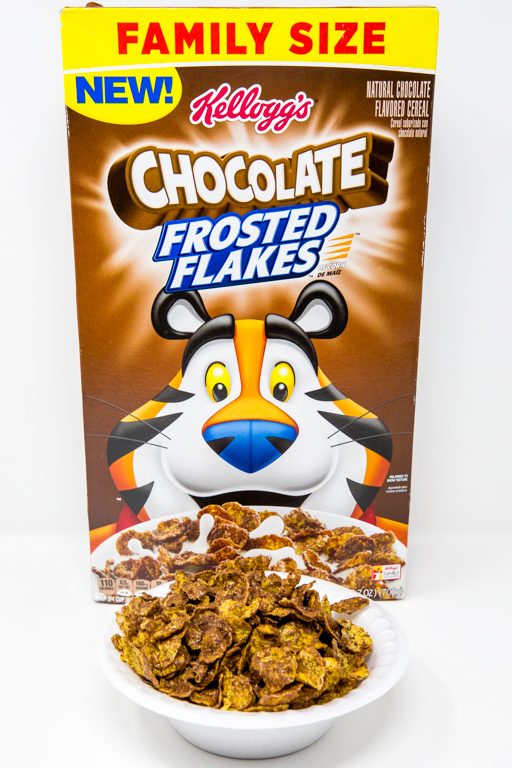 The back of the box claims that these are the Greatest Thing to Happen to Chocolate. We'll see about that. 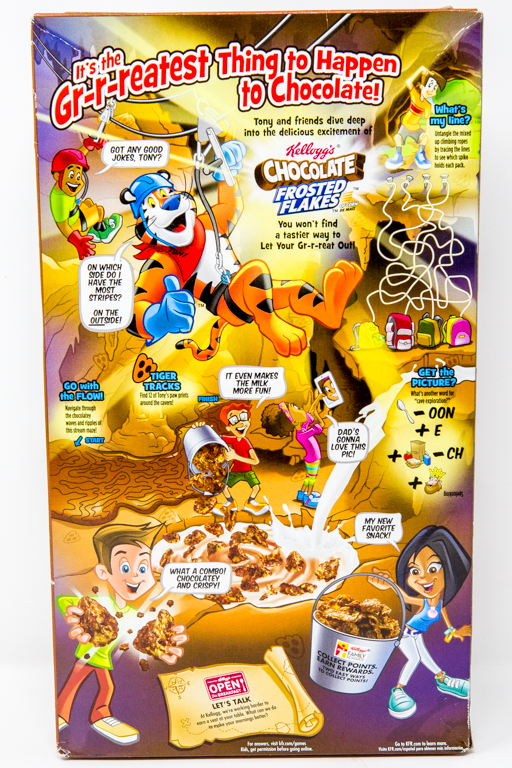 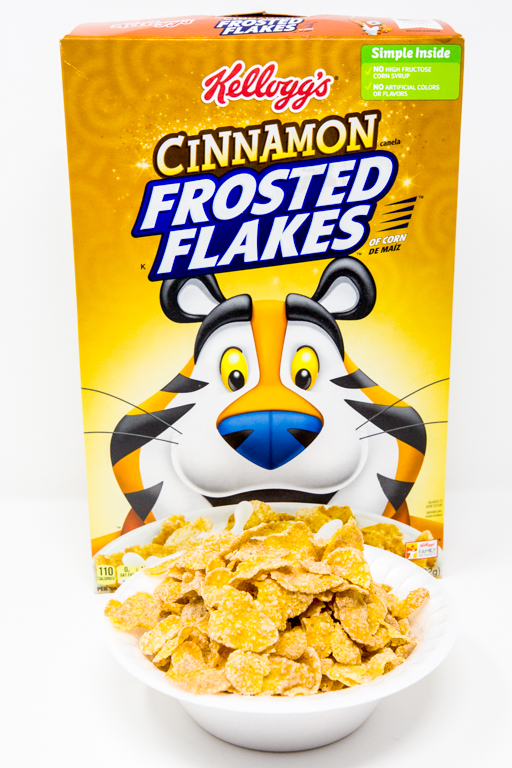 The back of the box has Cinna-Fun Facts on it. 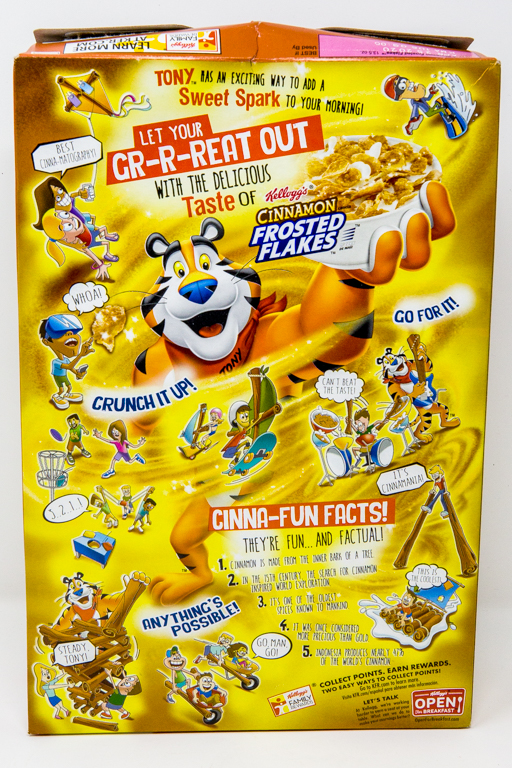 Frosted Flakes with Marshmallows were the last one on the back of the box that I needed to find. The taste test just wouldn't be complete without them. Unfortunately they were the most difficult to find. I checked Walmart, Target, Ralphs, Vons, Albertsons, CVS, and anywhere else I could think of. I even looked while I was on work travel to different states and had my brother in Colorado look for them. No such luck.
Finally I found them online from Kroger.com and had them shipped to the house. 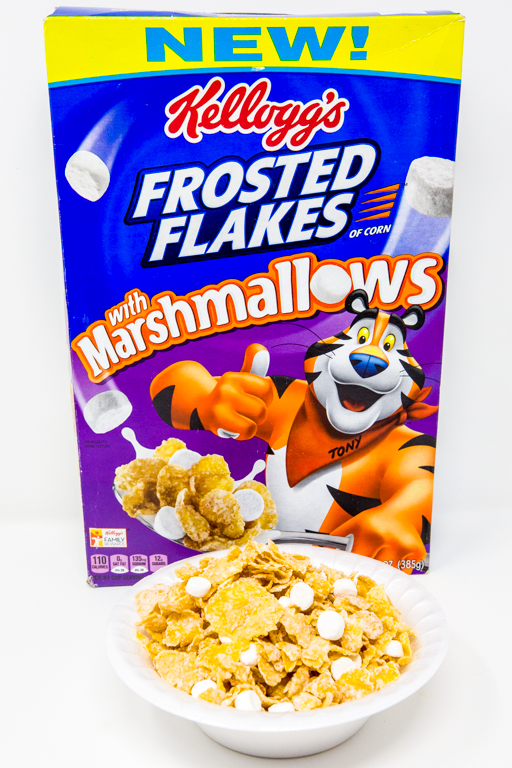 It's Marshmallow Mania! As the back of the box says, "Why didn't someone think of this before?" 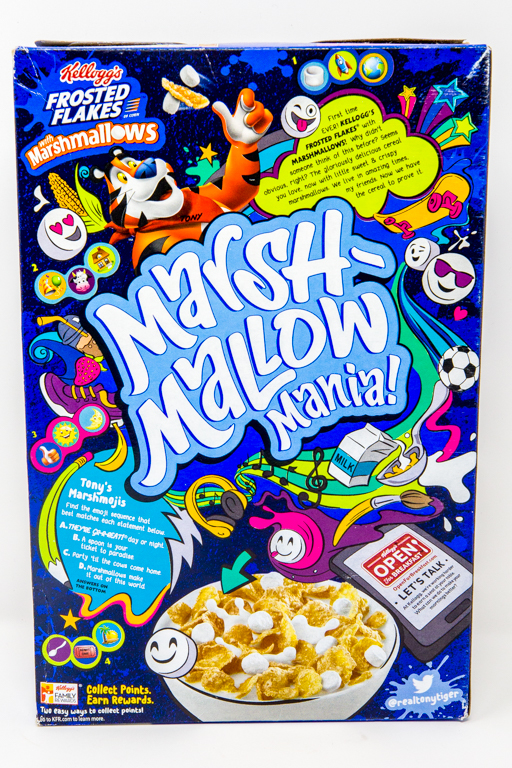 In my searching, I found even more flavors. Banana Creme? I'm not a big fan of banana flavored things, but okay. 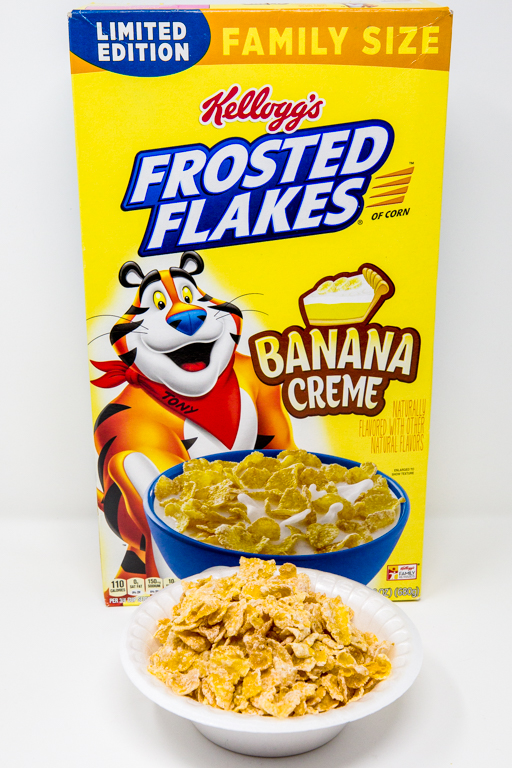 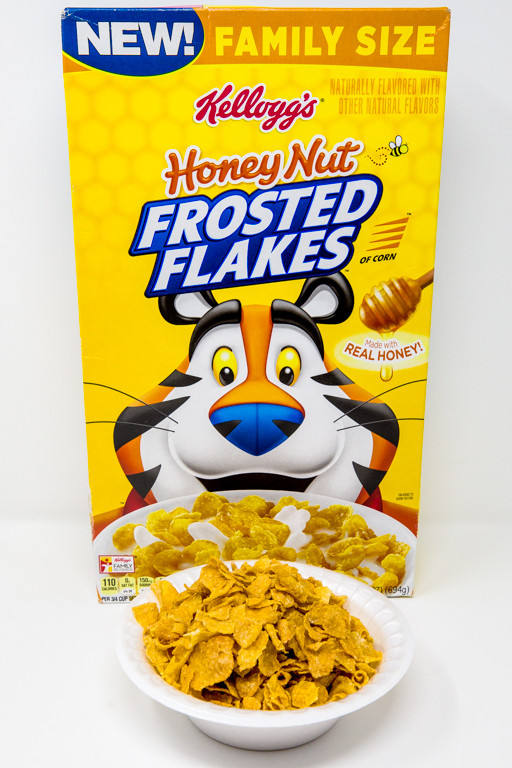 The back of the box promises a sweet taste of REAL honey. Even the bees are wearing red kerchiefs like Tony. 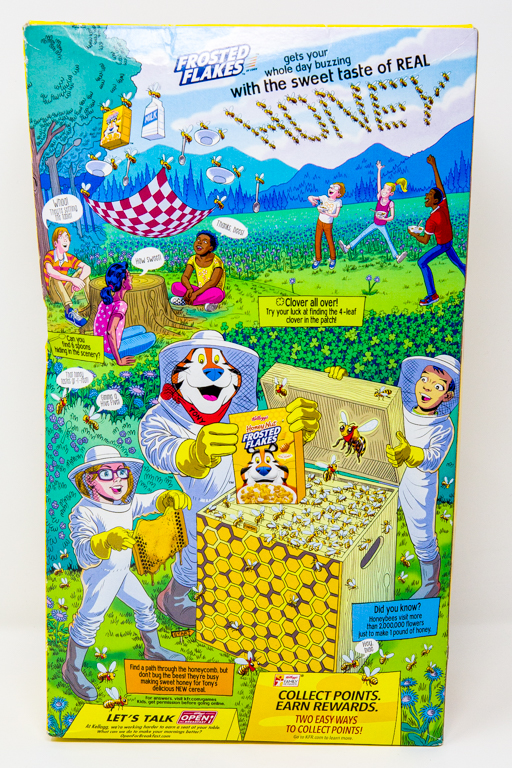 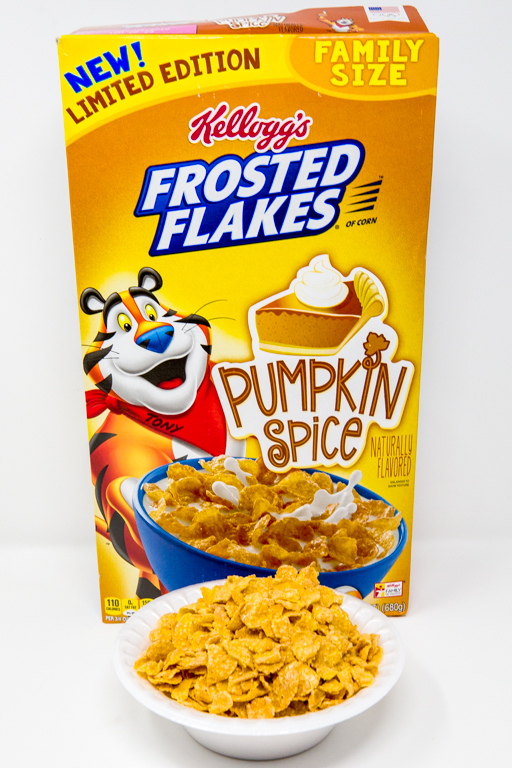 And the back of the box. 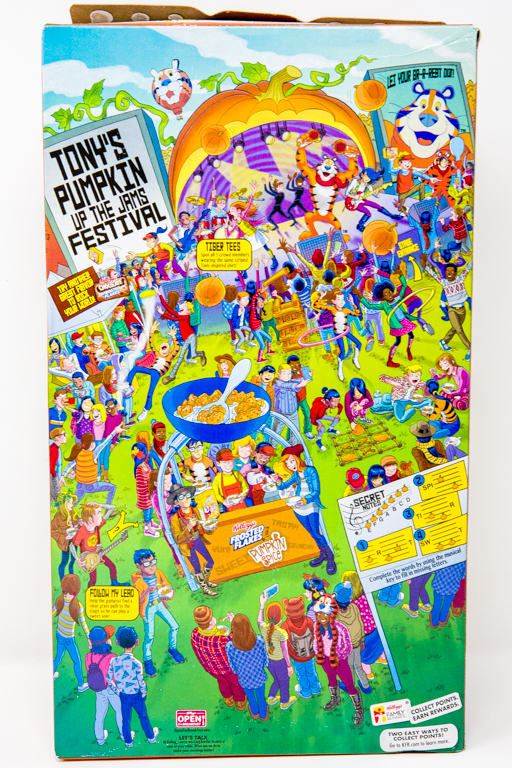 So that's all 7 cereals. 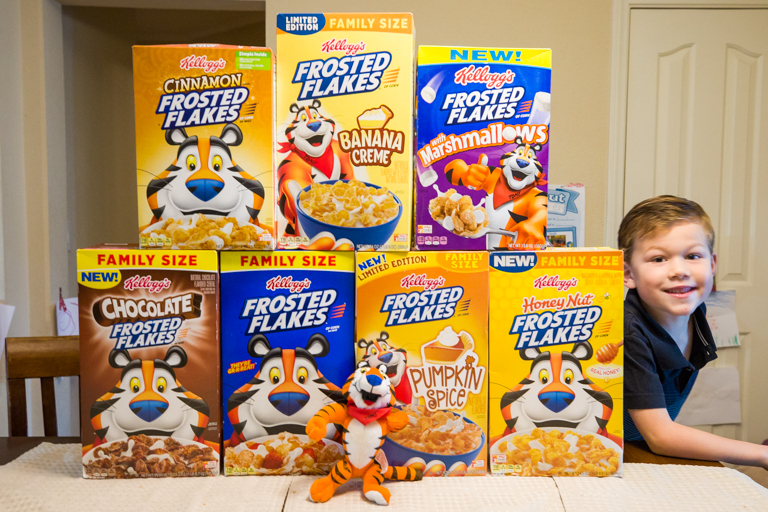 Now that they're poured into bowls it's time to taste them all. 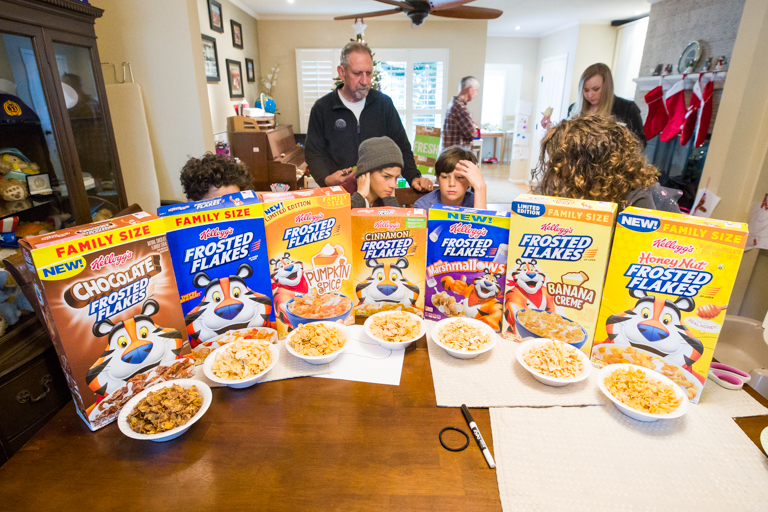 Original Frosted Flakes - Megan said that these are the taste of summer. They're sweet and crunchy with a corn flavor. It's been a while since I've had them, but they're still delicious.

Frosted Flakes with Marshmallows - So you want your sweet cereal to be even more sweet? Just add marshmallows. These marshmallows reminded me very much of the squishy marshmallows in the Peeps cereal. They're not hard freeze dried marshmallows like you'd find in Lucky Charms. 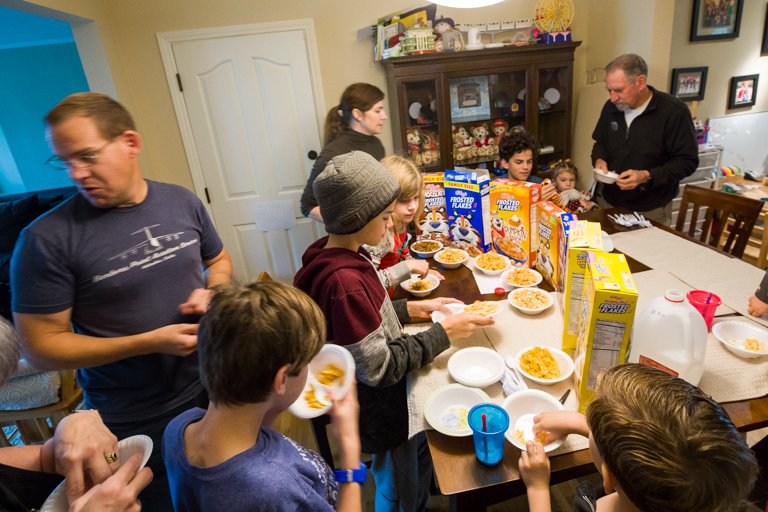 Chocolate Frosted Flakes - Mom thought these were nasty. They are lacking the strong chocolate flavor you'd find in something like Cocoa Krispies. I didn't dislike them.

Cinnamon Frosted Flakes - That strong cinnamon smell I referenced earlier is definitely present in the cereal. There's no doubt these are cinnamon flavored frosted flakes. I like them! Jon's favorite was mixing the Cinnamon and Chocolate flavors together. Not a bad combination. 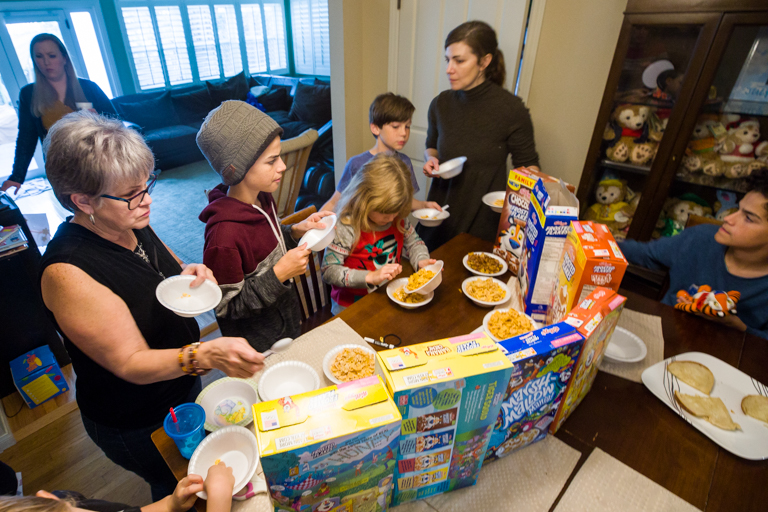 Honey Nut Frosted Flakes - Theresa thought these were nasty. I wouldn't go that far. They do have a very strong flavor. The honey nut flavor is more intense than what I remember in Cheerios.

Banana Creme Frosted Flakes - Out of all the flavors, these were the most surprising. So many people liked these. Megan said they were "Uh-mazing". Theresa thought they tasted like dried banana chips (though she still didn't prefer them). Guess Kelloggs did a pretty good job getting a real banana flavor into these versus the artificial banana flavor.

Pumpkin Spice Frosted Flakes - Pumpkin spice is fine in limited quantities. These tasted exactly like what I would expect them to. The flavor is just right. Now, I wouldn't go eat a whole bowl full of this flavor, but if you like it, these might be for you. 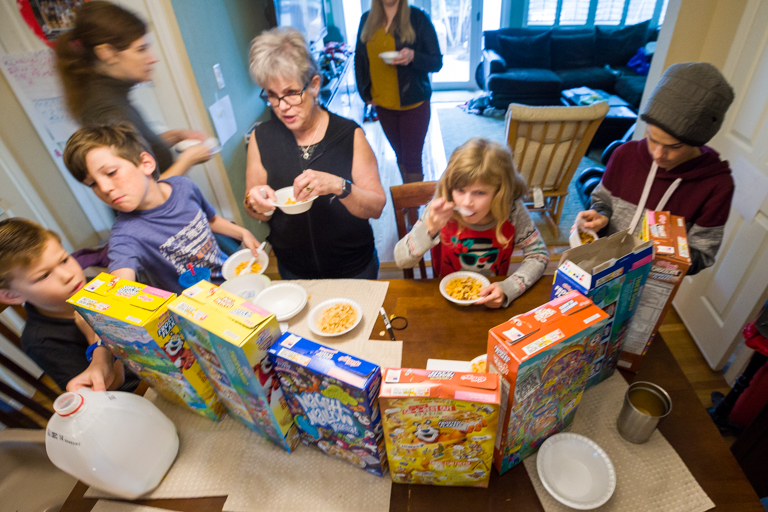 After everyone tried all the flavors, their favorite is.... The Original Frosted Flakes. Some of the others are good, but it's hard to beat the original. Still, it was a fun taste test to do and a fun challenge to find all the different flavors.
Posted by Joe at 4:00 PM