Welcome to Glacier National Park! We're about to visit a whole lot of National Parks for the next few weeks, starting off at this northern most park! 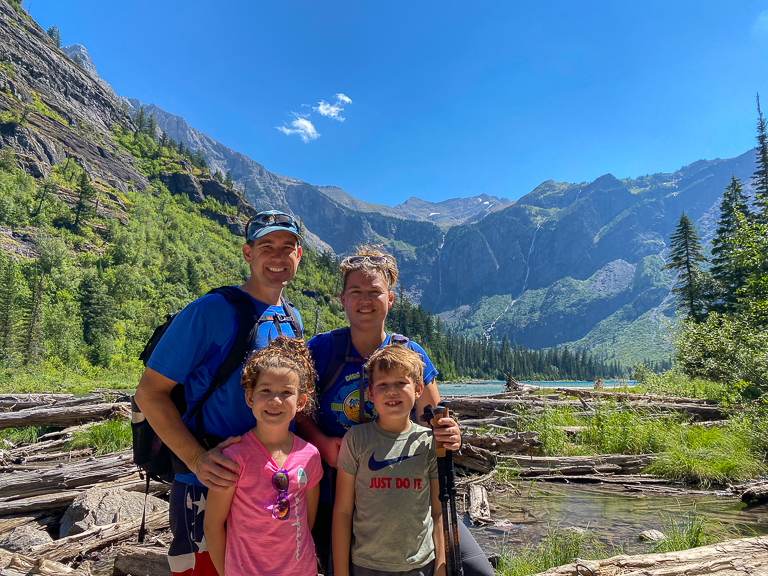 Like many popular National Parks, Glacier has moved to a reservation system to help with crowding. Luckily you can get a reservation online without too much trouble as long as you plan ahead. If you wait too long, you might be out of luck. You're limited to entering either before 630am or after 5pm, which really hinders the activities that are open.
Despite having the reservation system, the entrance to the park can really back up. 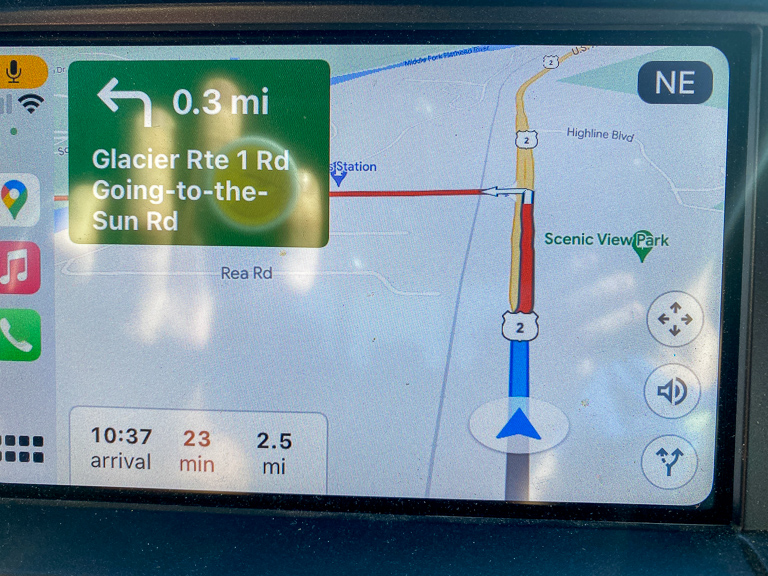 With multiple cars waiting to inch forward along the mile drive to the ranger station. 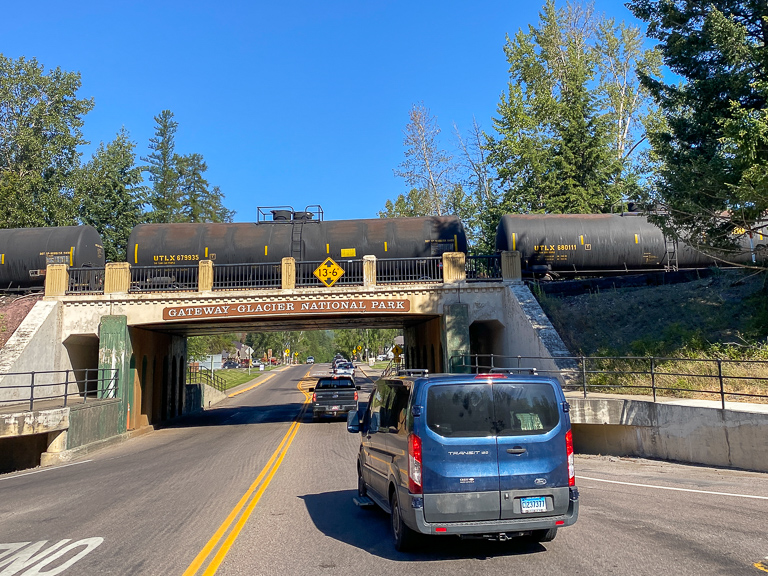 Twenty minutes later we made it to the front, got our reservation checked and were allowed to enter. If you didn't have a reservation you got turned around, and sadly there were a few cars that we saw that had to do that. 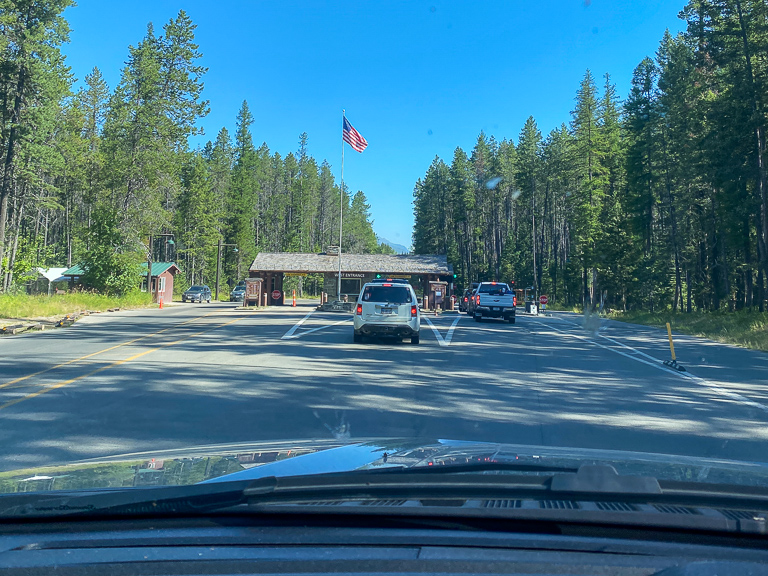 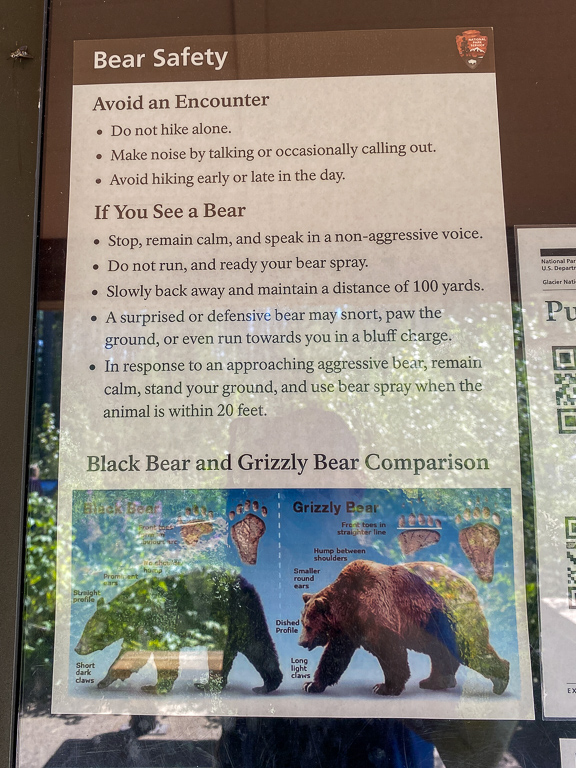 Before we go do anything, the kids have to go visit with a Ranger. There are Junior Ranger badges to earn! 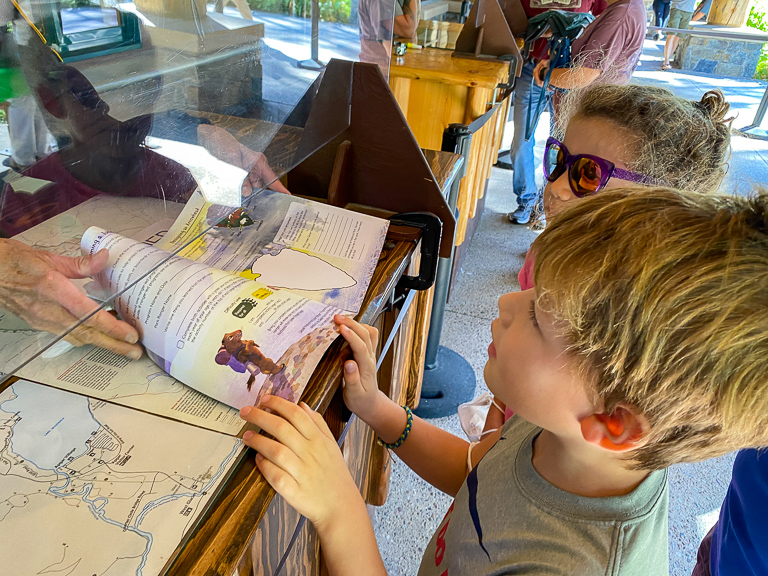 Here at Glacier, the Beast is only allowed to travel so far! He's 22 feet long and these roads are a bit too windy and narrow to navigate. Also once you get to where you're going, the parking lots at the trailheads tend to fill up. Good thing they have a shuttle service! 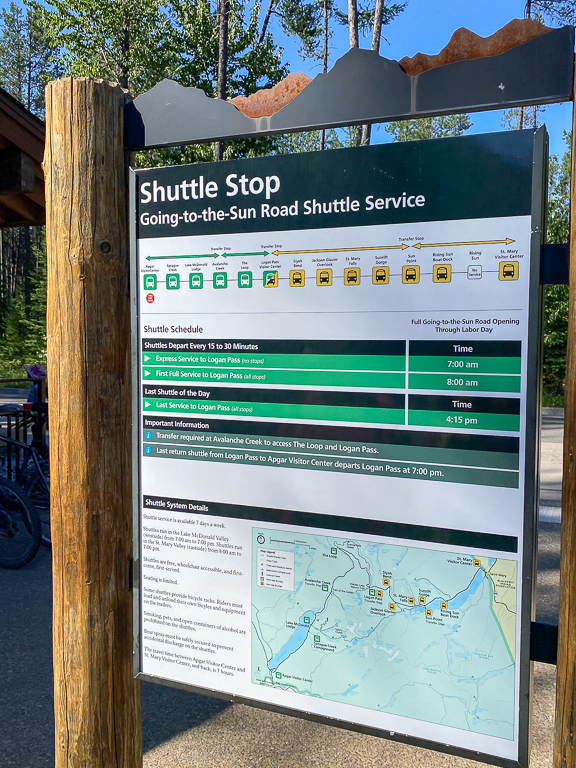 While we waited, we worked on our Junior Ranger Program. 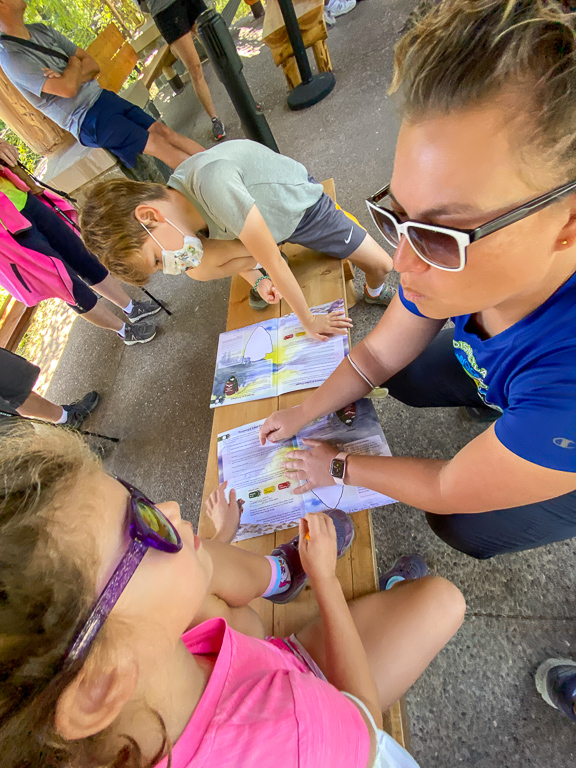 It's a pretty popular option for traveling around the park. There was a bit of a line, and it took us a couple cycles to make it to the front. 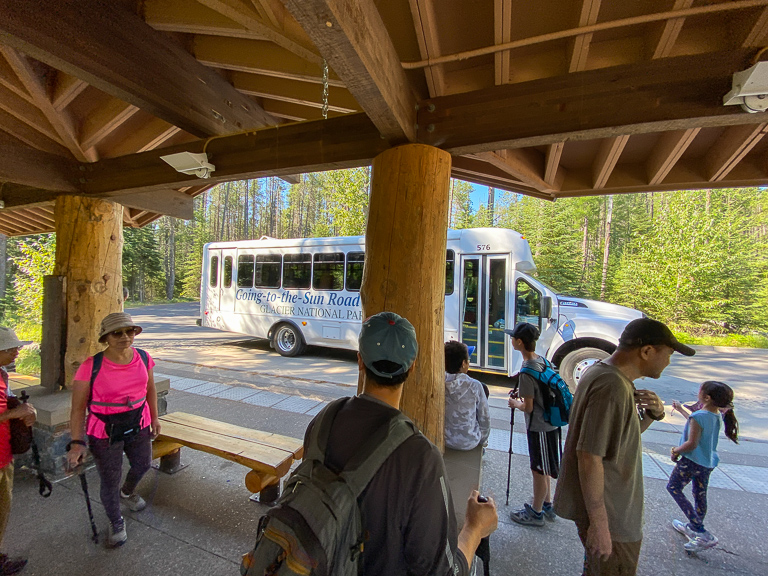 But eventually we made it on. The kids continued to work on their Junior Ranger workbooks. There was a board game moving around the park, where you flipped a coin and moved 1 or 2 spaces based on heads or tails. I didn't have a coin, but did you know that Google does? Just search for "coin flip" and it'll randomly generate one for you.
The board game was interesting too. There were "shortcuts" you could take, which broke the park rules (cutting across barriers, etc) but inevitably they would take you right back to where you started. 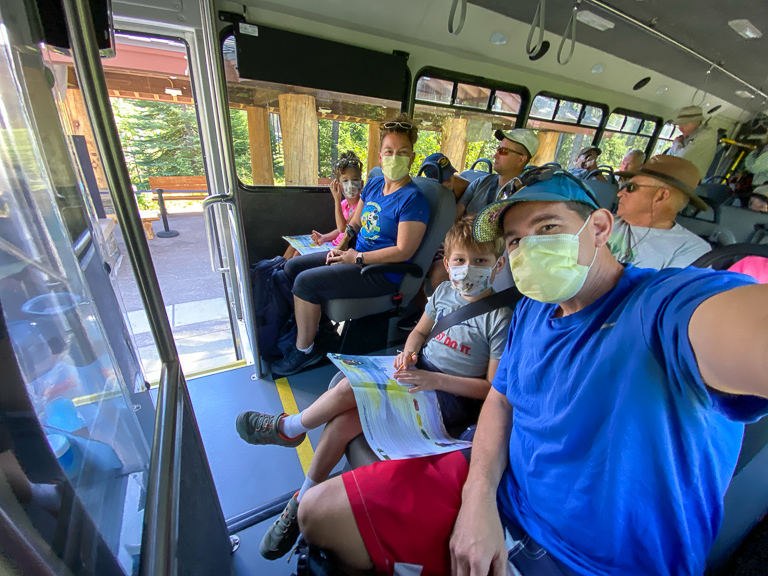 Finally we arrived at our hike for the day. It's the Trail of the Cedars to Avalanche Lake! 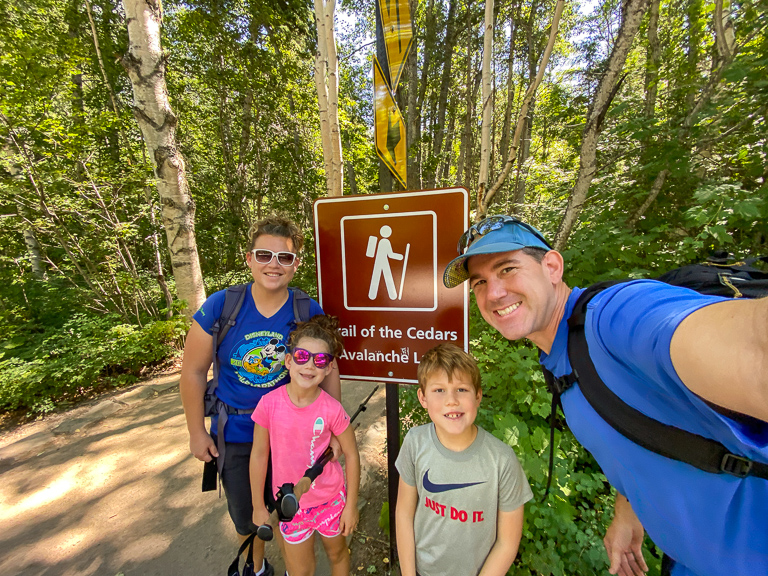 It starts with a nice boardwalk. 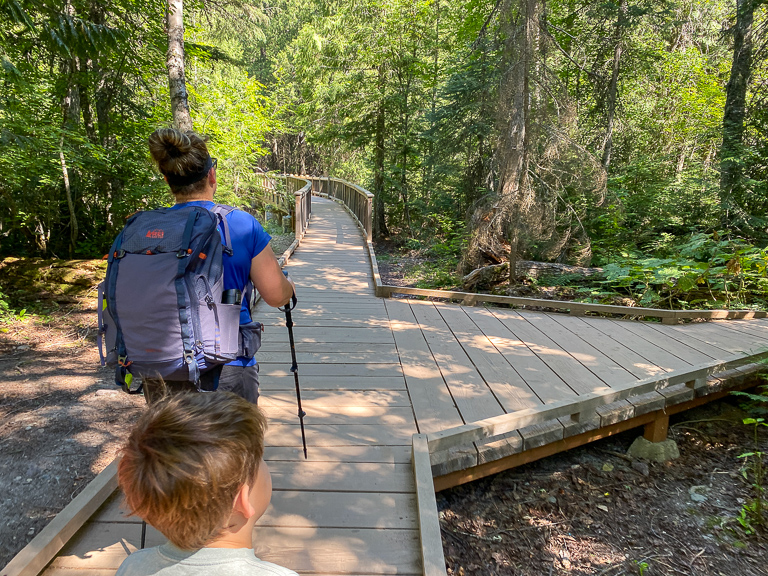 Yep, there's bears in the area. No pets.
We did read that parties of 4 or more weren't likely to be approached by a bear. Safety in numbers. Other hikers were wearing bells on their belts. We opted to sing while we hiked. 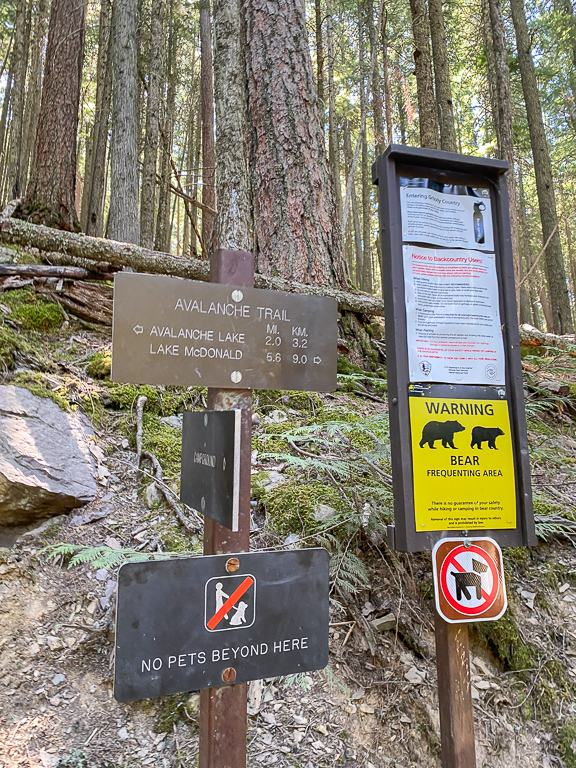 Walking by a creek. 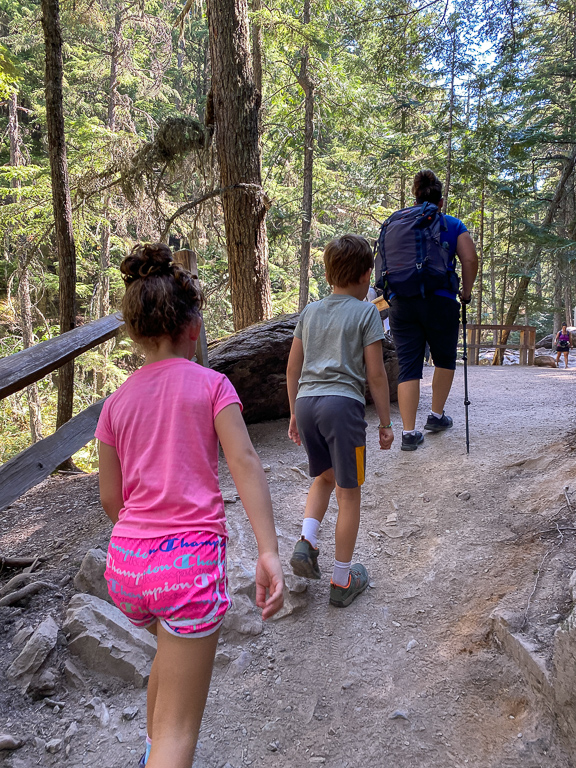 There's a barrier to keep people out, but we still saw people making their way down into it. 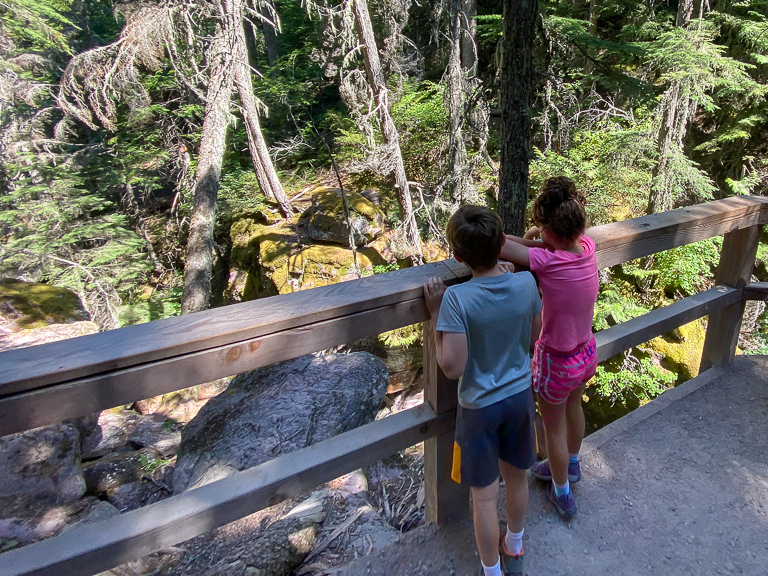 Probably why they put up these kinds of signs. 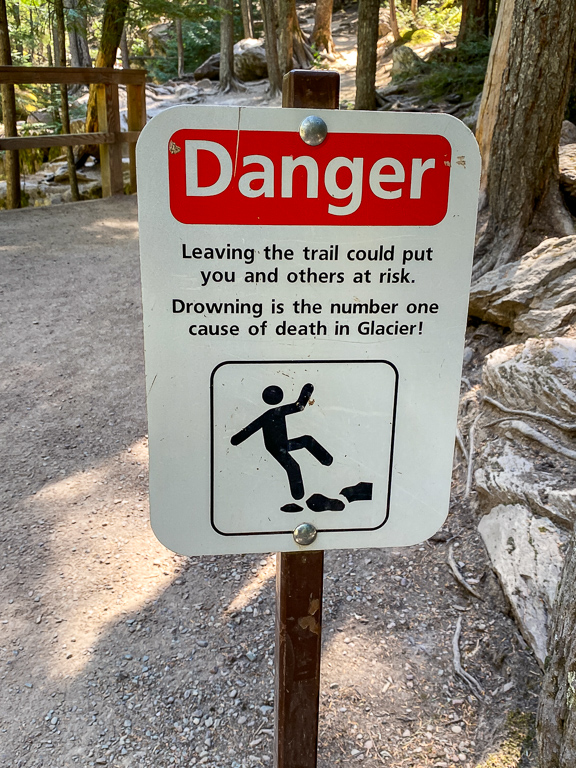 That water is amazingly blue and clear. 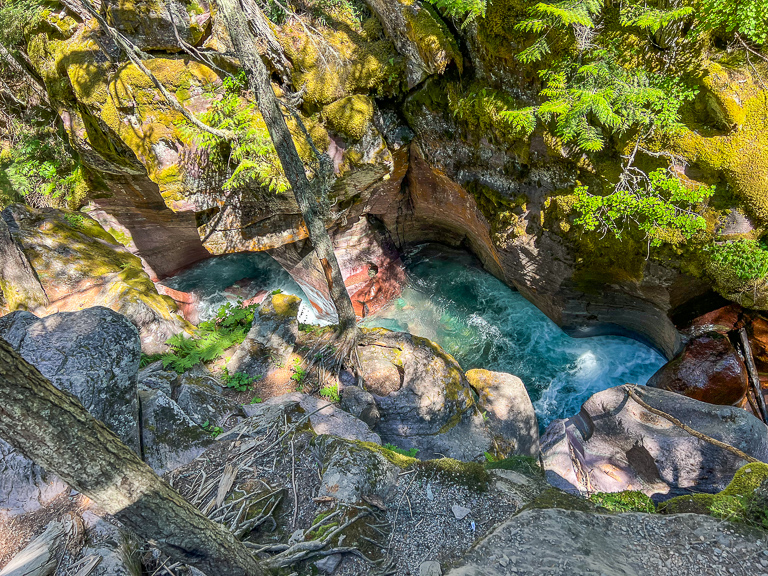 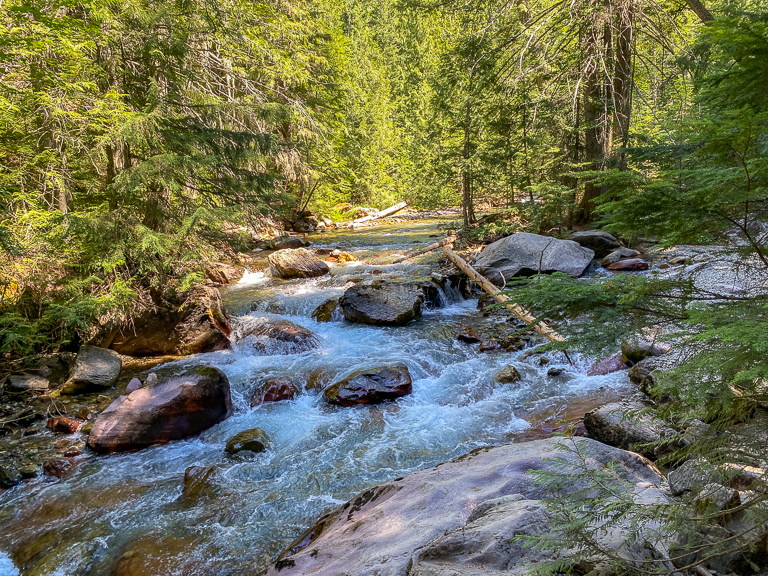 And we're here enjoying it! 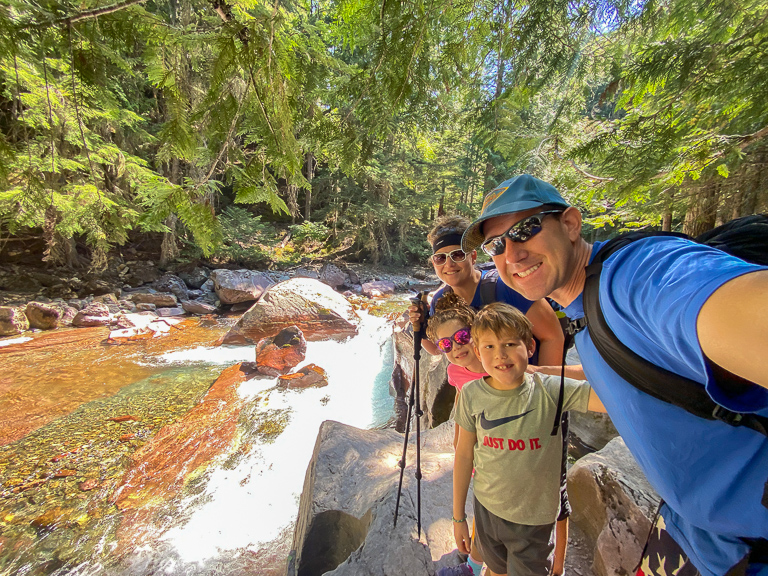 It was a lovely hike. 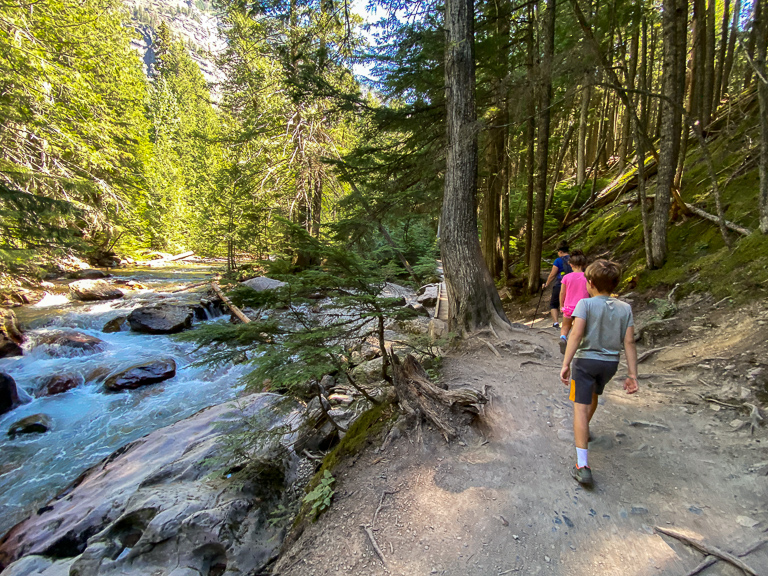 We could smell the berries here before we actually saw them. And sure enough, there were berry bushes around. We sang a little extra loud here. 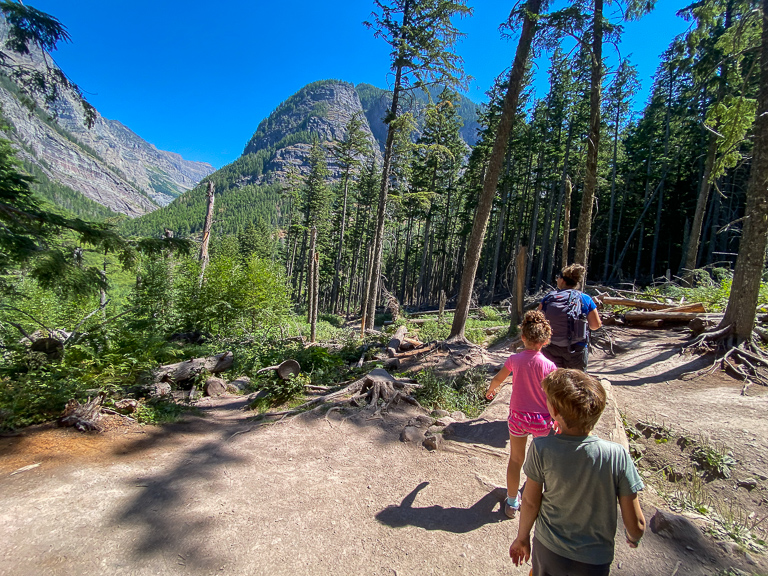 And it wasn't too much further until we saw a group of people standing beside the trail looking at something. A few people on the trail told us that there was a Grizzly Bear and some cubs just off the trail.
The kids were a little hesitant (being snack-sized and all) but with this many people, I'm sure we can outrun someone. Once we got there, there wasn't much to see. The bear was on top of a hill and laying down. I could only make out some tufts of fur and definitely couldn't get a good picture amongst all the forest debris. But, whatever. We encountered a grizzly bear on our Glacier National Park hike!
It wasn't too much longer until we reach Avalanche Lake! It's beautiful! 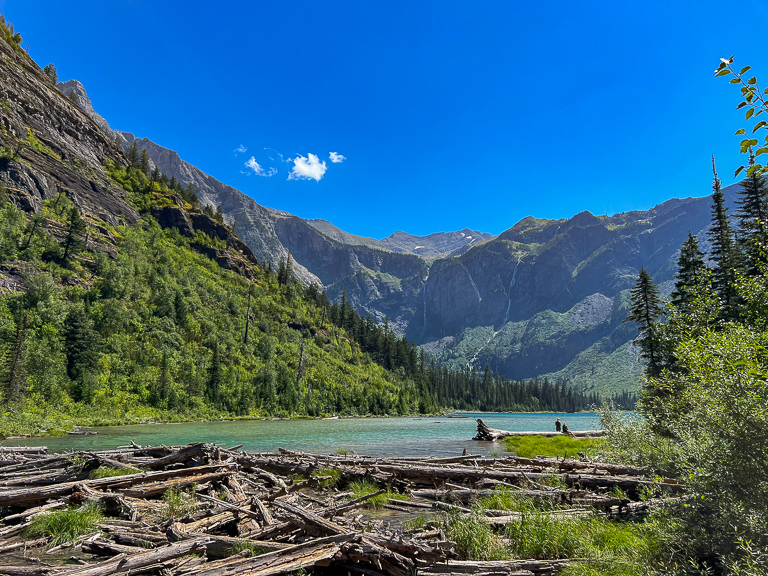 Look at that pale blue water. 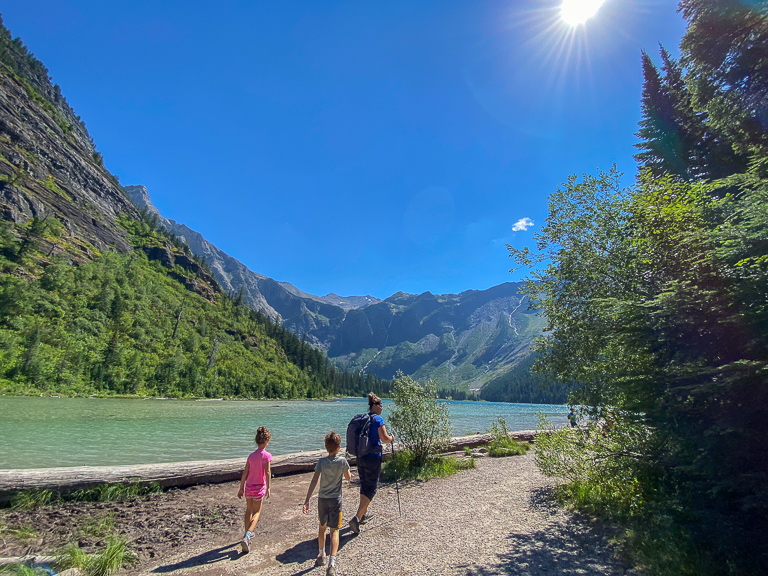 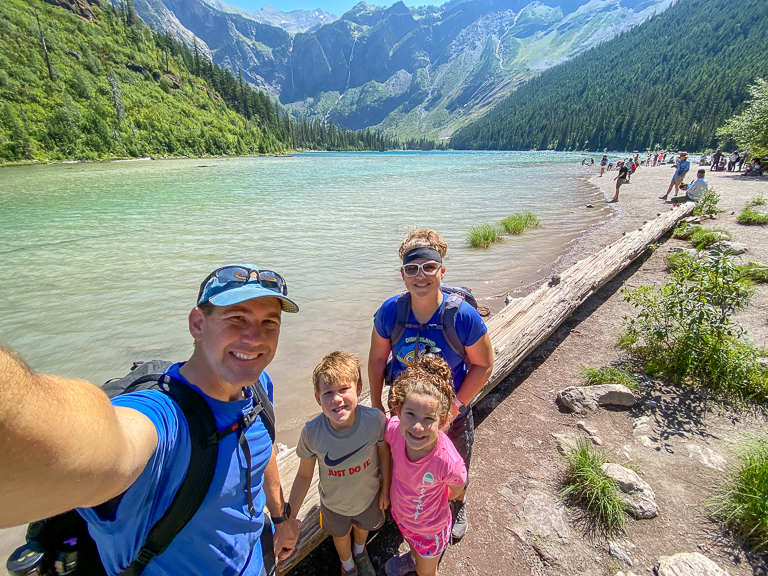 Quite a few people have made the hike before us and were enjoying the view as well. The beach was downright crowded! We found a spot to sit down, but when a naked toddler started running around, and then squatted to drop a deuce right in front of us, we decided to pack up and move a little further away! 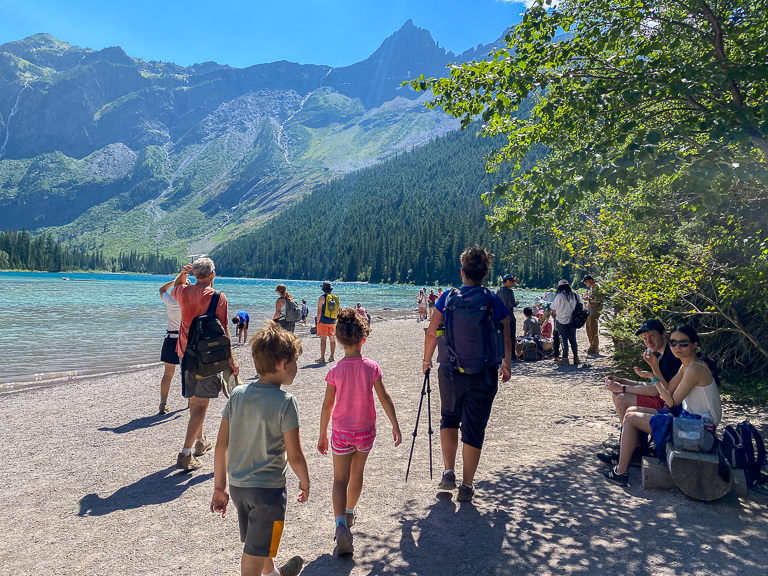 Ah, this is so much better! Let's do lunch here! 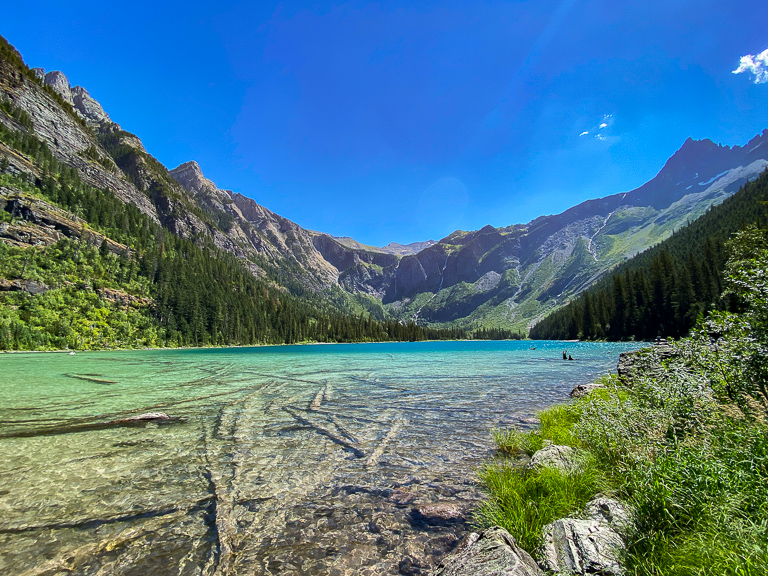