Today we've got a very special treat! Our friend Todd, who lives in Seattle, came over to visit us, and knowing how much we like to do taste tests, brought one of his own!

Beecher's Handmade Cheeses opened in Pike Place Market in 2003 and was the only cheesemaker in Seattle! Since then, they've been crafting cheeses right in front of people in their glass windowed store and the cheeses they create have become award winning favorites! 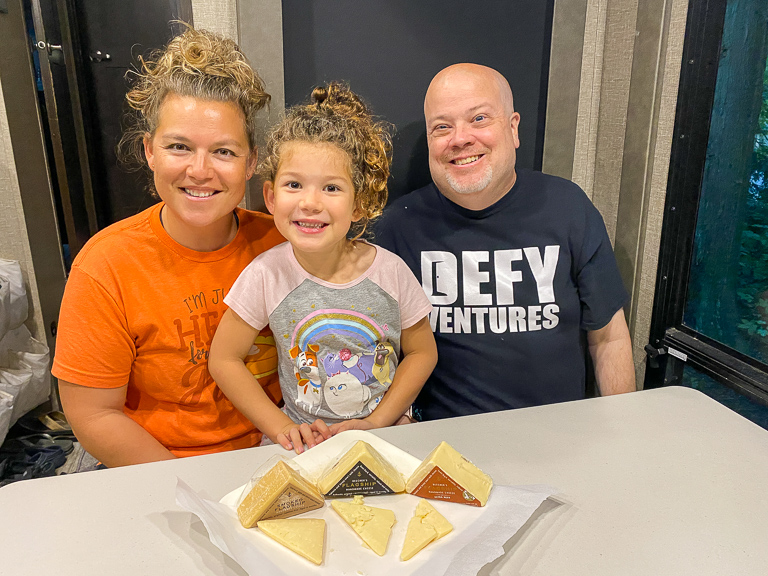 Earlier in the week we were able to visit their store and have some of their delicious Mac & Cheese, but lacking an easy way to refrigerate it, we skipped on buying any chunks of cheese. Todd wanted to make sure we had the full experience and brought a sampling of 3 cheeses for us to try today. The Beecher's Flagship Cheese, Flagship Extra Aged, and Smoked Flagship. 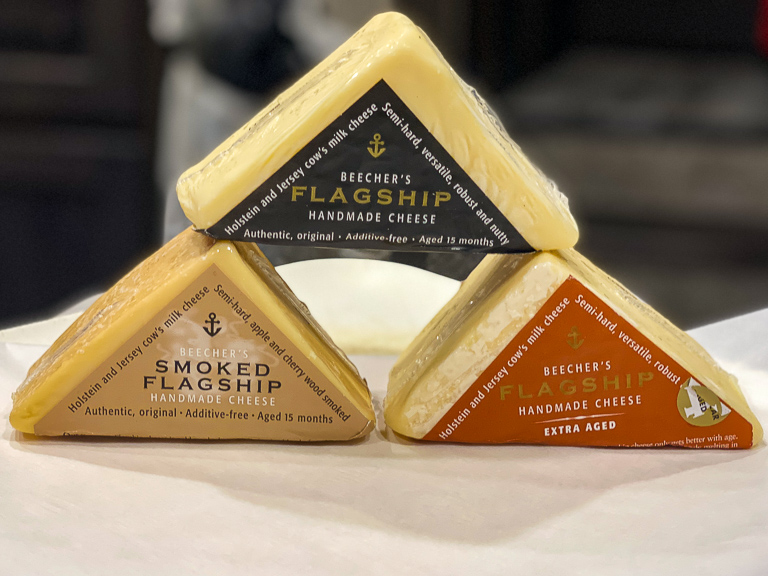 Cutting a few sampling slice off each one. I'm excited to try them all!
Todd - Beecher's has a shop at the airport and any time I travel to see my family, I have to bring them some. 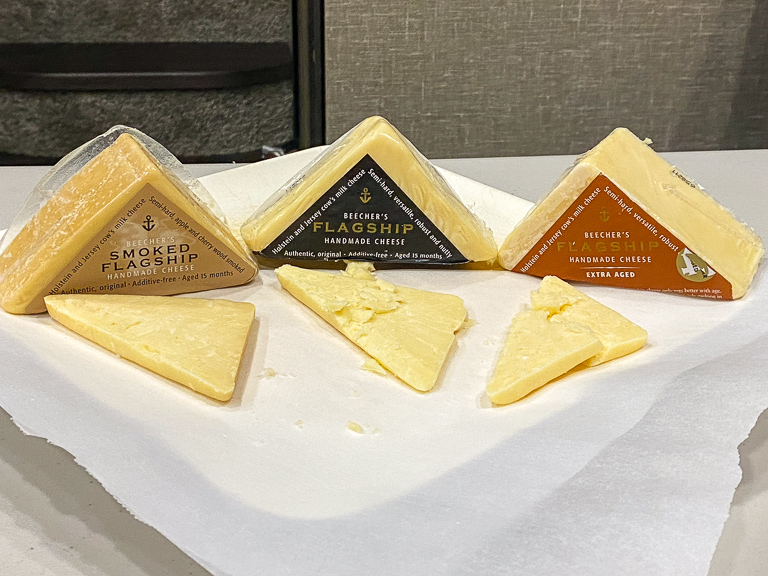 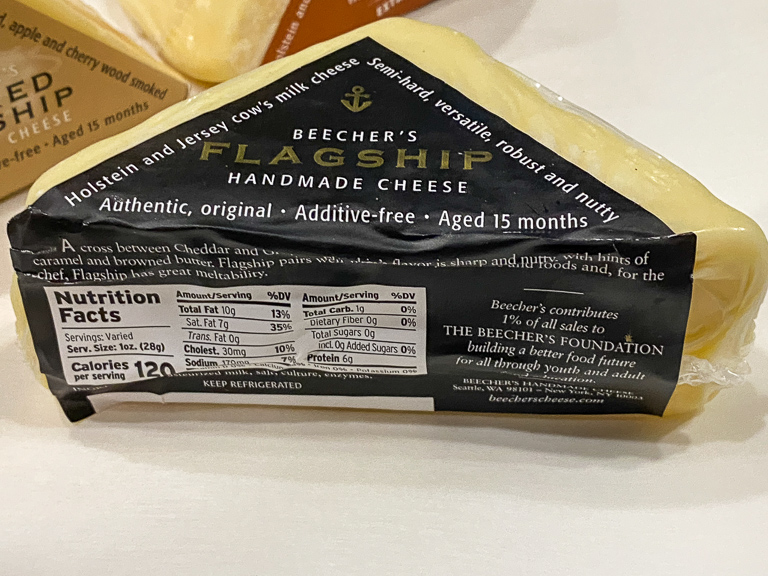 A cross between cheddar and gruyere, the flavor is sharp and nutty with hints of caramel and browned butter. 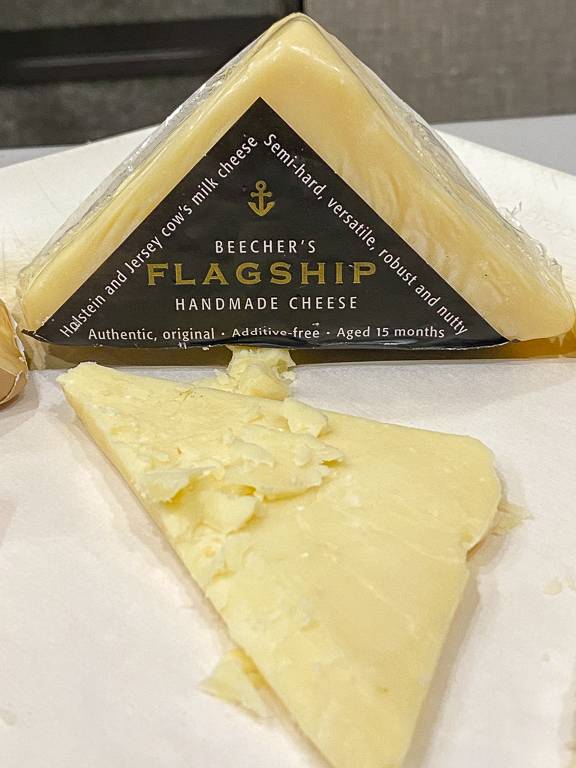 Todd - Theresa going for a big piece right off the bat.
Theresa - I'm not holding back. I like cheese.
Ian - Kinda like an aged cheese. Like a cave aged cheddar.
Theresa - I like it.
Joe - It's got the little calcium crystals in it.
Todd - It gives me hints of a swiss cheese. 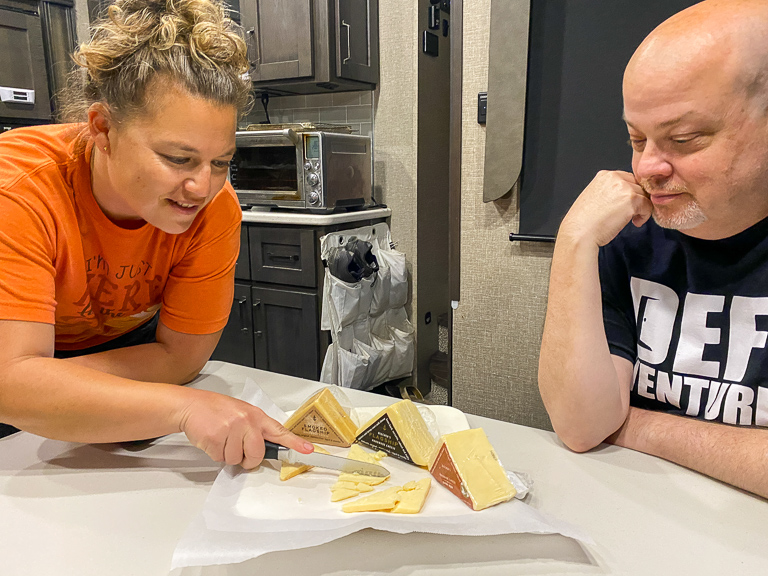 Joe - That's a tasty one. That's an eating cheese. Not like, put it on a burger and have it get lost among everything else. You don't want that flavor to be secondary.
Todd - You can put it on a simple cracker. 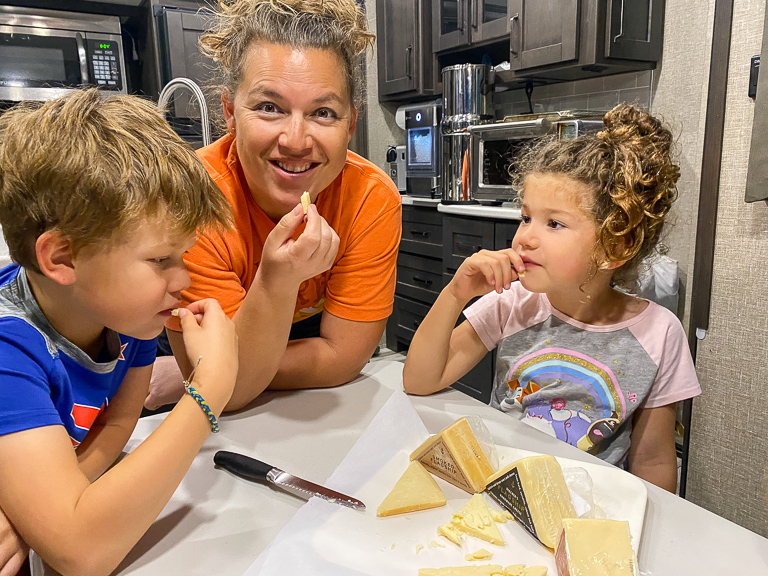 Let's try the Extra Aged next.
Beecher's Flagship Extra Aged Handmade Cheese  ($24.99/lb) - Holstein and Jersey cow's milk cheese. Semi-hard, versatile, robust and nutty. At least 4 year aged.
Like most of the finer things in life, our signature Flagship cheese only gets better with age. After at least four years of aging, the cheese takes on a nutty sweetness, completely melting in your mouth with layers of flavor. It's especially crumbly. All that aging. 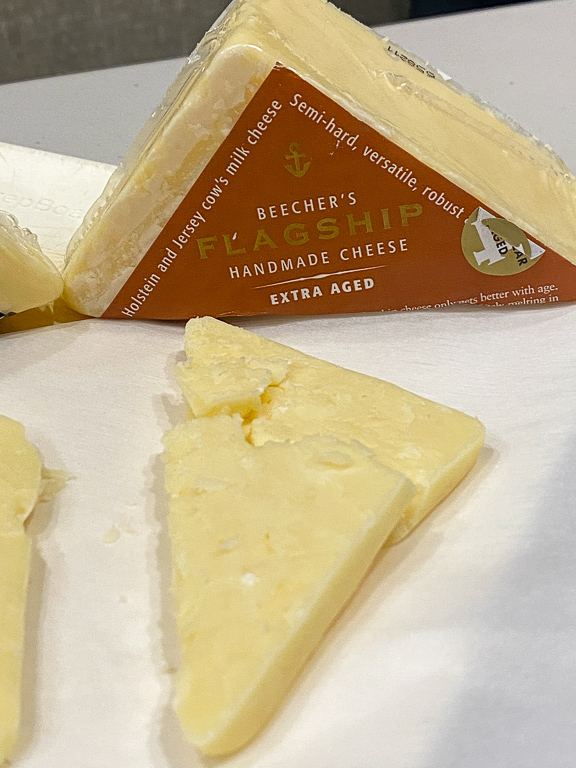 Theresa - It's got a little bit of a fruity flavor.
Joe - It's more smooth than the 15 month one.
Ian - It's a crumbly cheese.
Joe - I do like the crystals.
Theresa - Wow, we need to cut some more of that already. Everyone is eating it up!
Theresa - There's a lot of things going on in that one. Lots of flavor. 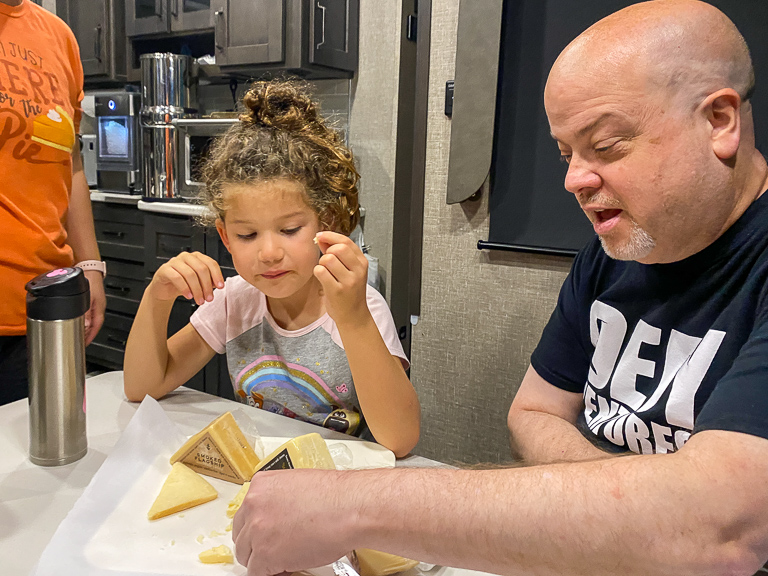 Alli going back for another piece. Alli is that three pieces? Or is that four?
I think she likes it.
Theresa - I think the four year is smoother and sweeter than the original Flagship. 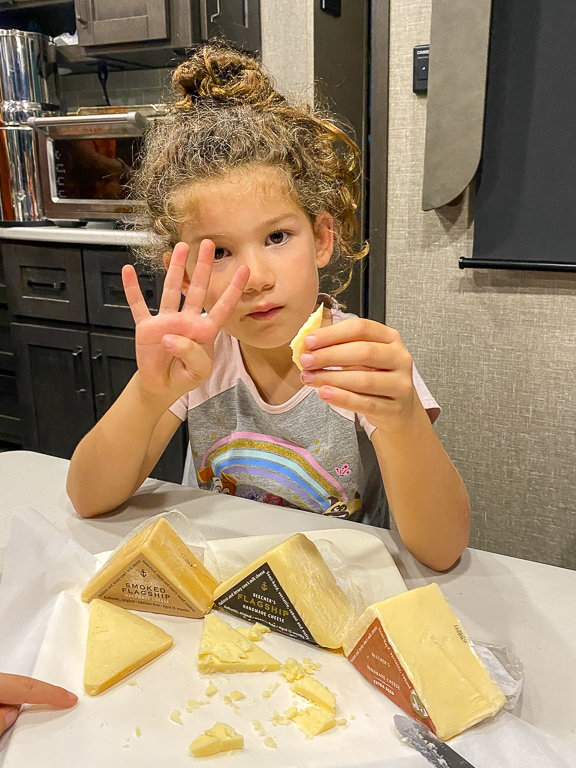 Our signature Flagship cheese is cold smoked over a distinctive blend of apple and cherry wood, resulting in Flagship's robust and nutty flavor infused with the heady, fruity essence of natural hardwood smoke. 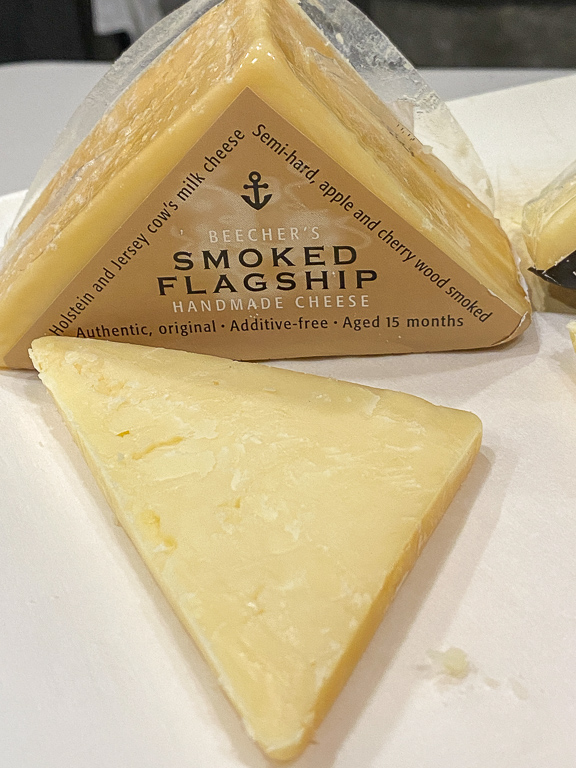 Ian - That has a very smoky flavor.
Todd - Very smoky.
Ian - Time for some water.
He's not a big fan of smoke. 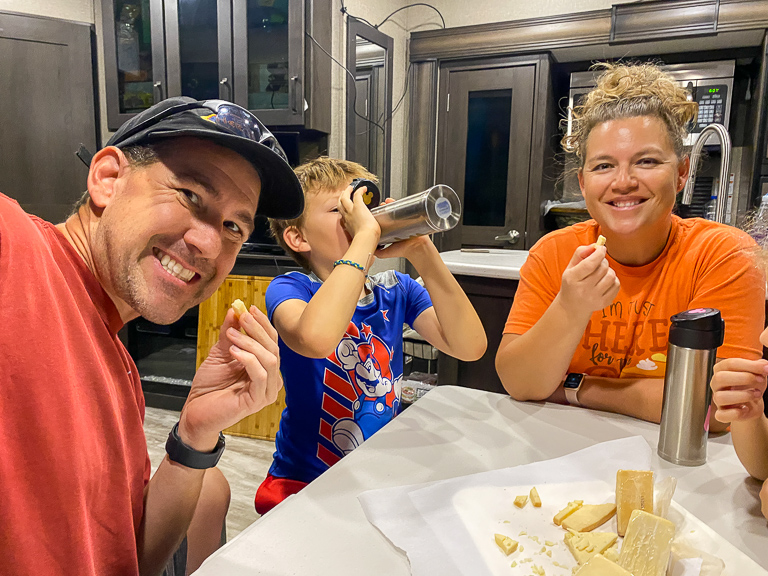 Theresa - The smoke is good, but I feel it overwhelms the base flavor of the cheese with so much smoke. As far as smoked cheeses it's great.
Joe - That one would be good with a meat or something to go along with it.
Theresa - That could stand up to a strong meat, like a salami or something.
Todd - I don't know if you could slice it thin enough, but that could be really good on a burger. 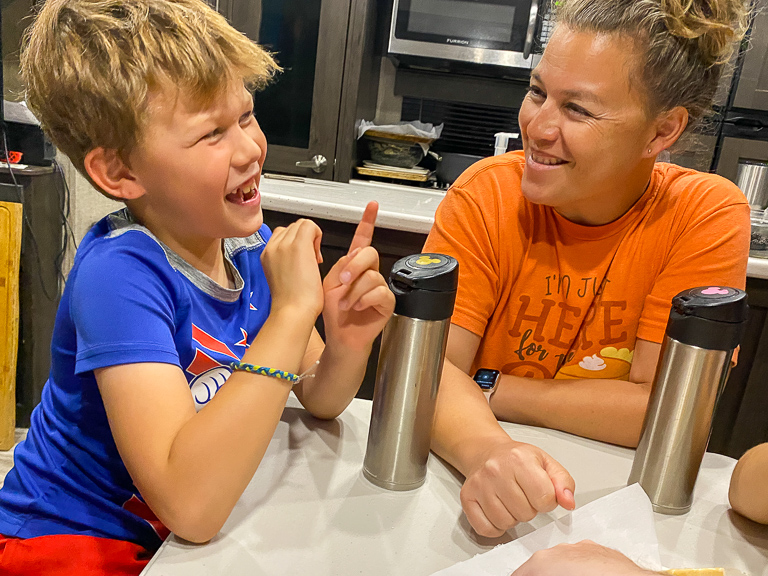 Look at all those crystals in the extra aged. It's so crumbly! 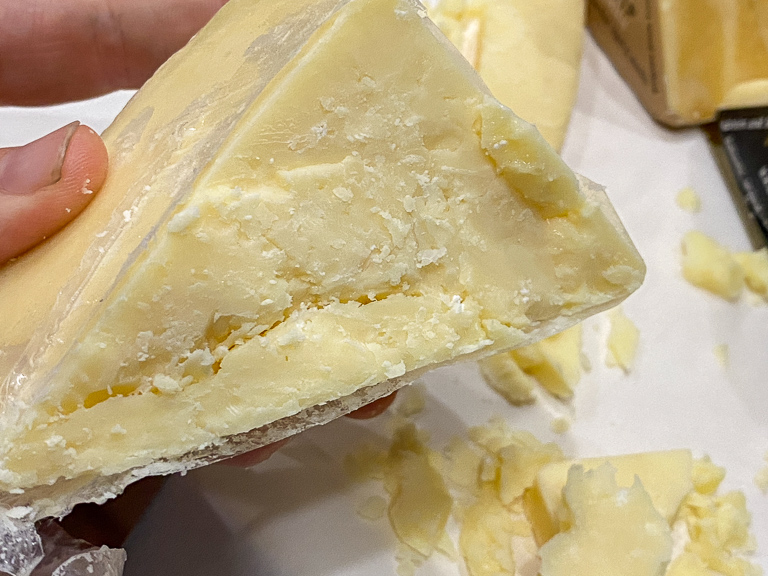 Theresa - Anyone want a blackberry with it? I just tried it. It's pretty good! 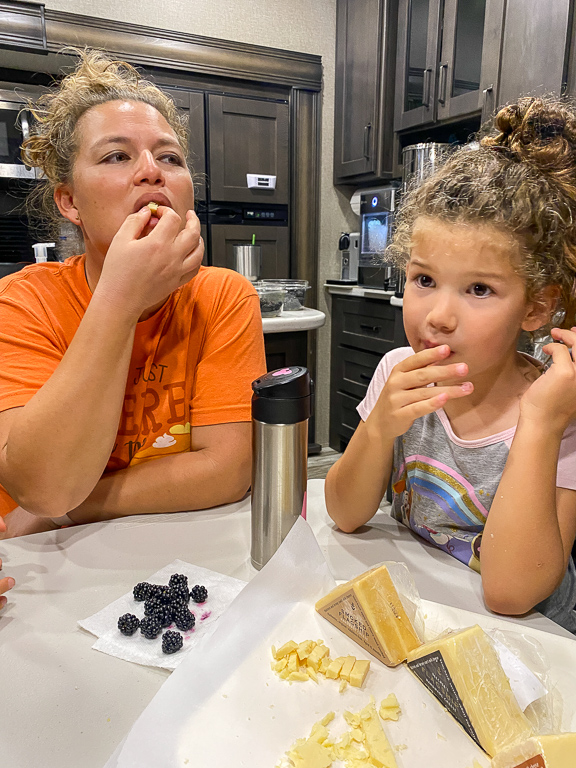 Theresa - Have some smoked cheese with two blackberries. It's delicious!
Todd - I'm not a huge fan of the smoked and blackberries together. But it's good with the aged cheese.
Theresa - I feel like a jungle-gym right now. But they're not blocking my arms, so I keep eating cheese.
These cheeses are a little expensive, ranging from $20-25 a pound. It's not something you'll eat every day, but it's a cheese for special occasions. These are way better than the $3/lb cheeses. 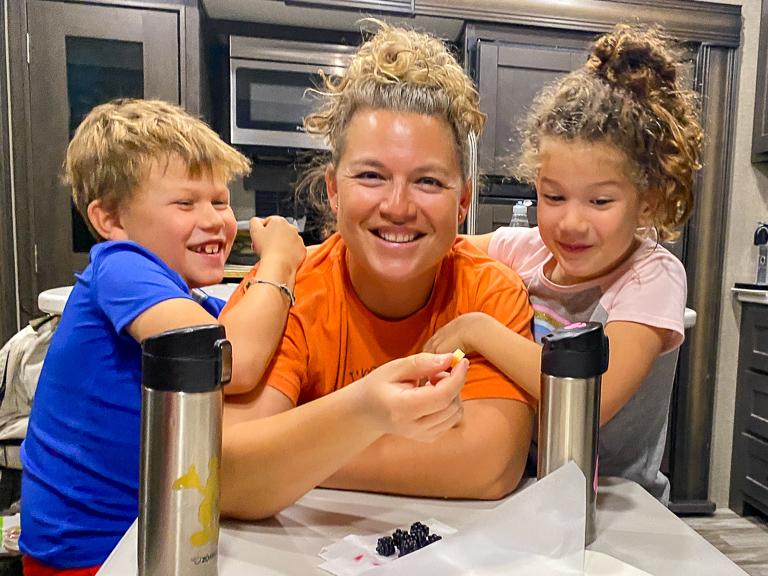 Thank you Todd for bringing us all these cheeses! They were fantastic! 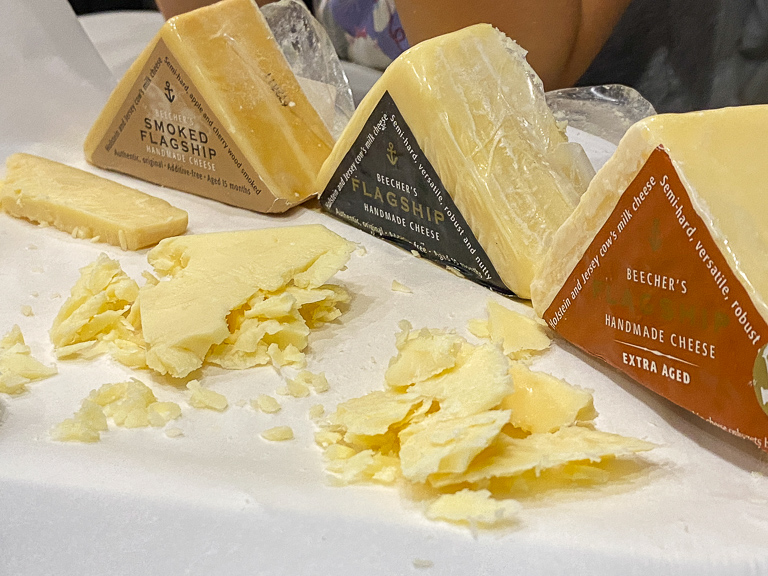