Since we're in Salt Lake City, of course we've got to stop by the Great Salt Lake! 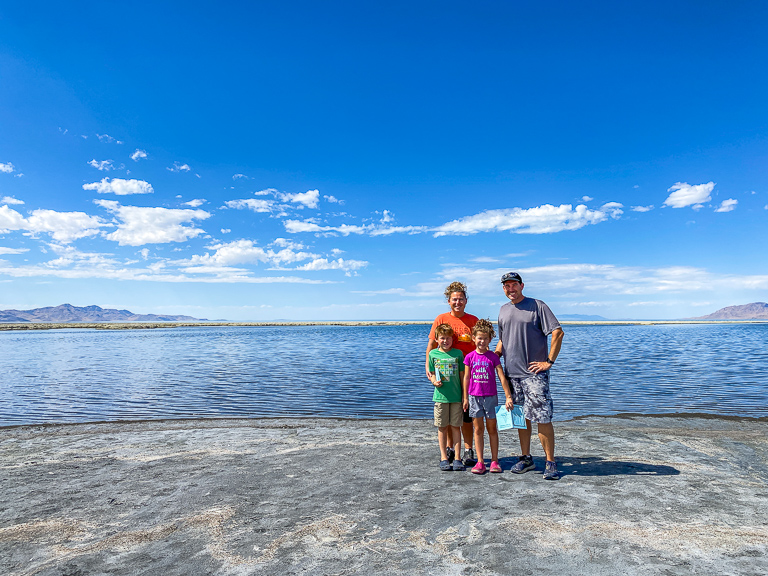 This is a State Park versus our typical National Park, so our pass didn't work here. Luckily it was just $5 to enter. Parking was abundant, but one thing we noticed as soon as we got out of the truck was the smell... Eww.
We noticed that there were RV parking spots here with hookups, but were thankful we didn't try to stay here. That smell is enough to put you off. 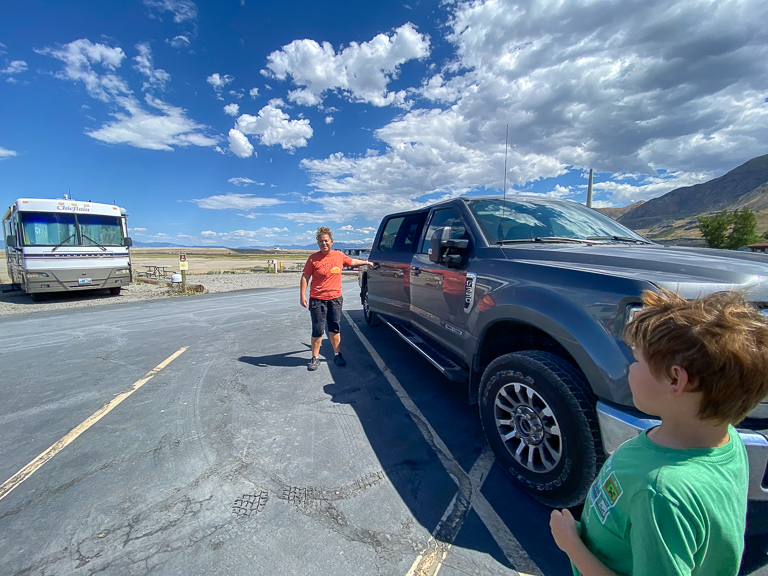 Let's head inside the visitor's center and see what we can find. 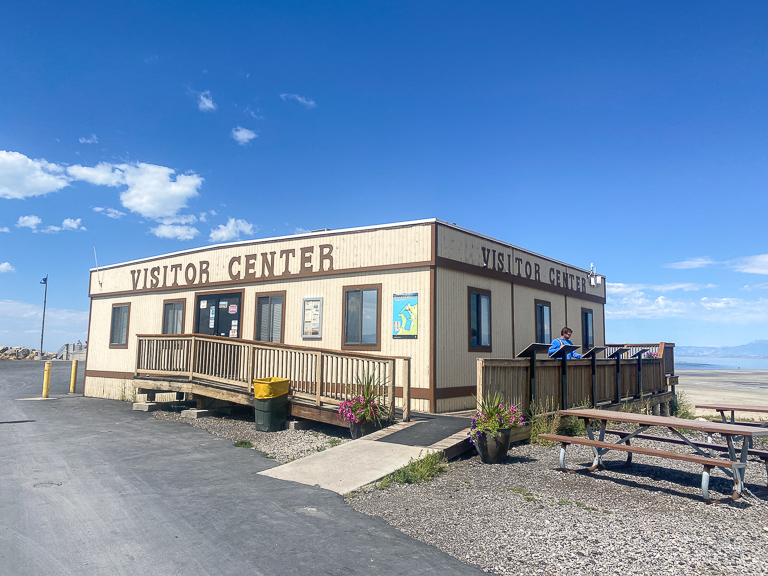 Look at that giant chunk of salt that's been pulled out of this Great Salt Lake. The largest lake west of the Mississippi at 75 miles long and 35 miles wide. Only a few species can live in water this salty. 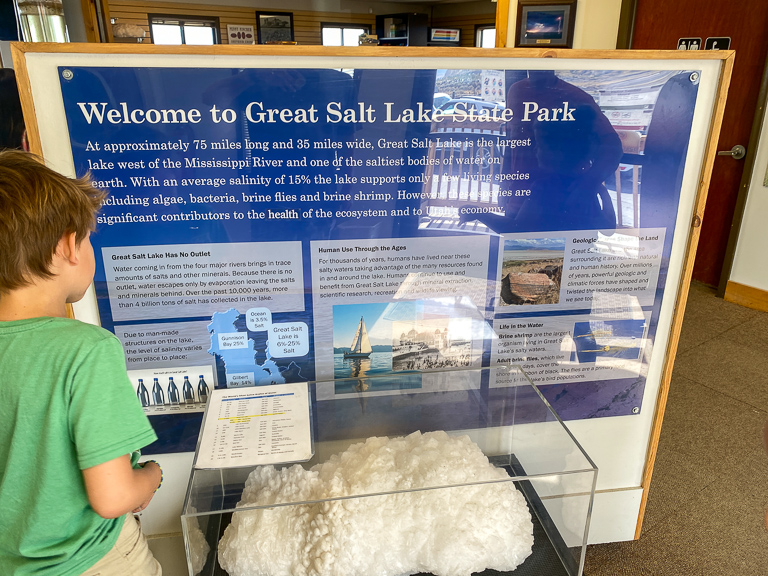 Because there's many rivers that flow into it, and no outlet, the minerals brought by the river build up while the water evaporates. Parts of it reach 30% salinity, making it the 8th saltiest body of water in the world. 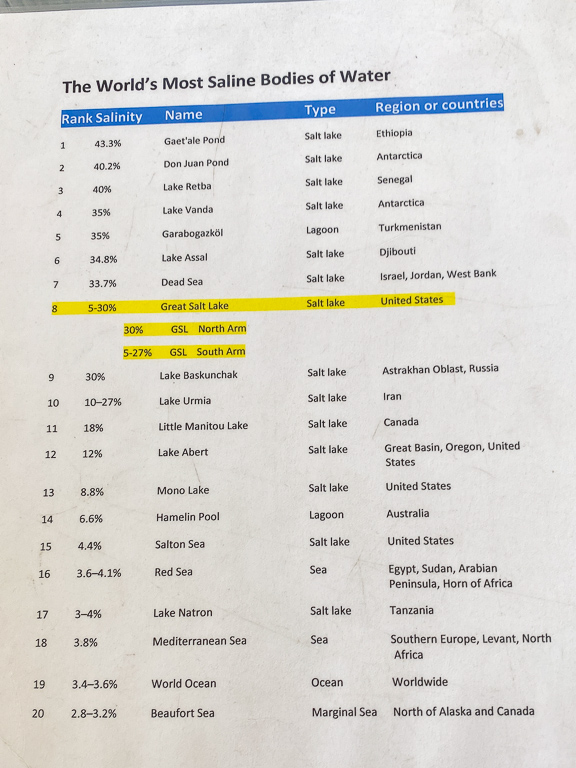 Heading up to the desk, we asked on the off chance if they had a Junior Ranger program. We weren't expecting it, since it's a State Park and not a National Park, but they did! We learned a little about the Brine Shrimp that live in the water. 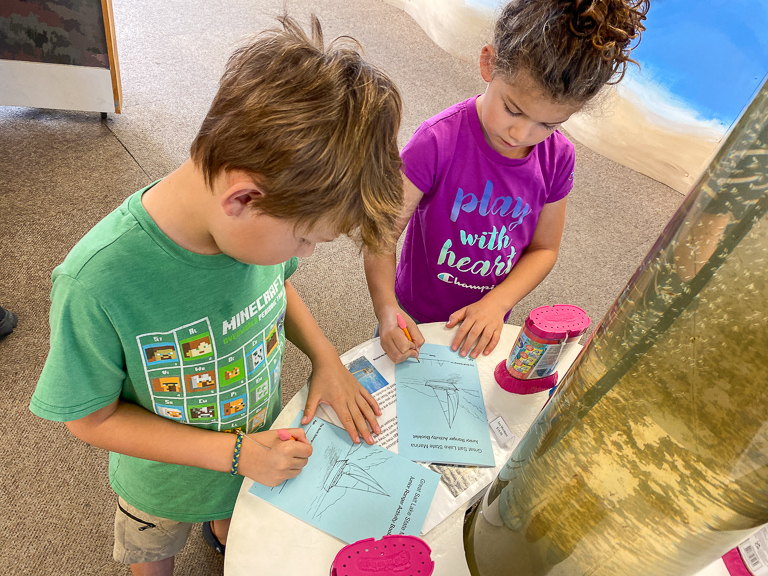 And watched a few minutes of a documentary telling how they formed and how they were explored. 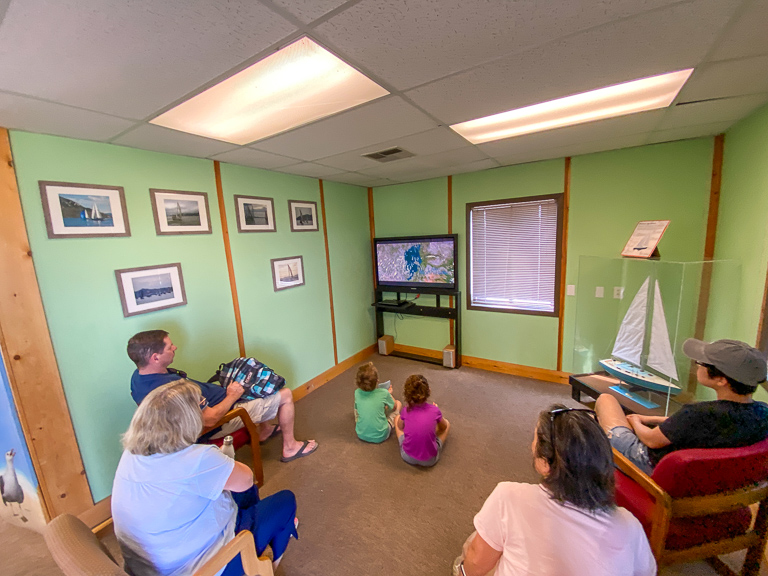 I was surprised to learn that even though it's 75 miles by 35 miles, the average depth is only 14 feet, with the deepest point being 33 feet. And weather can really affect this area too with wind speeds up to 100 mph and waves reaching 10 feet! 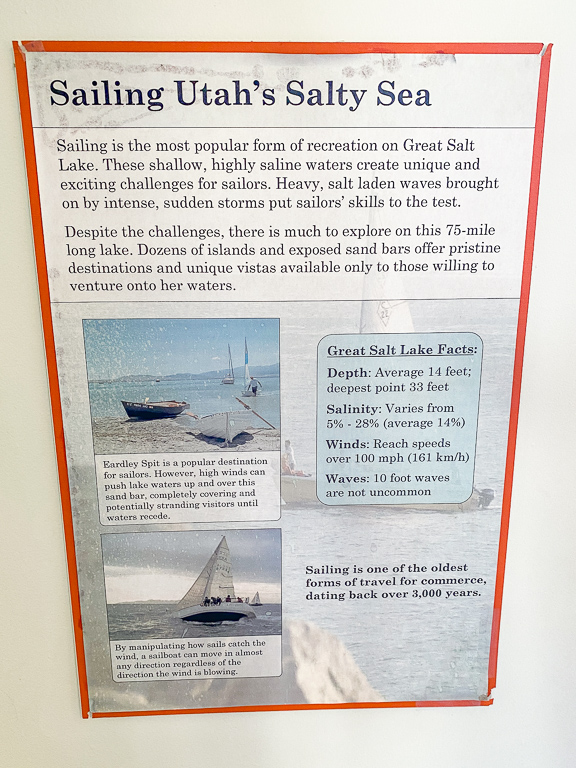 We went outside to finish our booklets. Oh yeah... The smell. 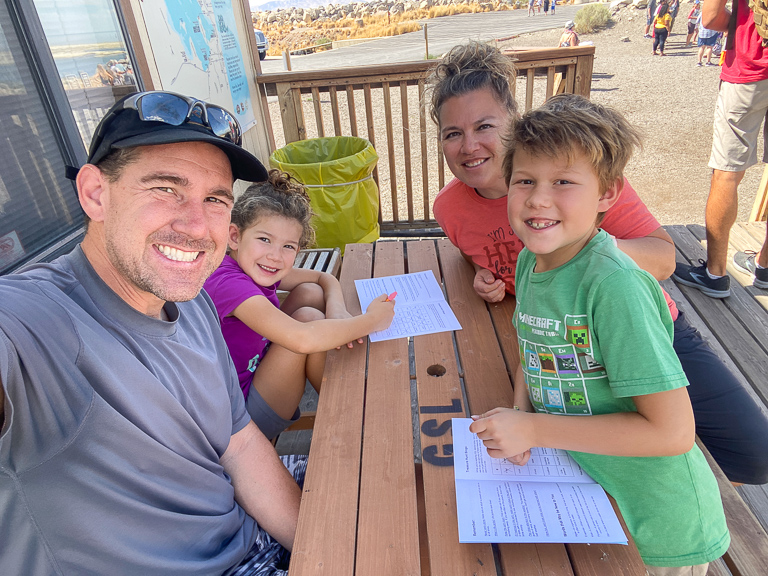 Well since we're here and we've learned about it, we've got to go down a little closer to see it. 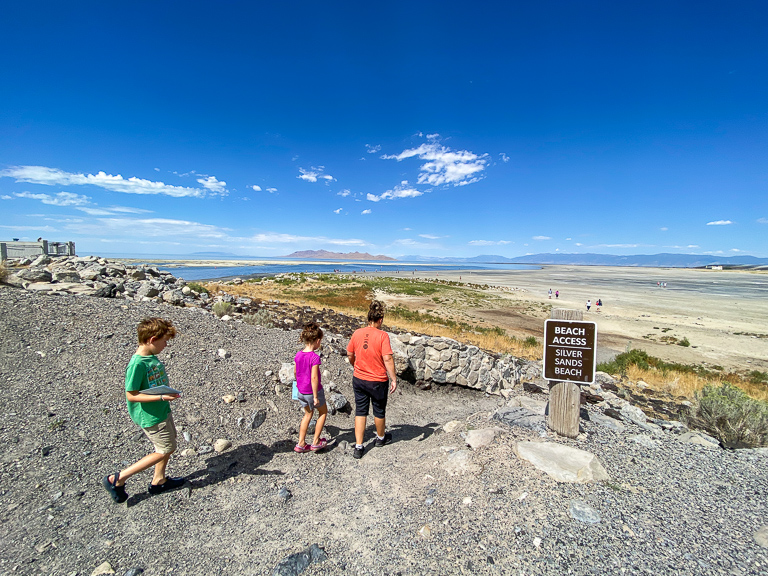 Walking across the crunchy sand. This was not a soft beach sand like we're used to in California. This seemed to have a crispy layer on top. 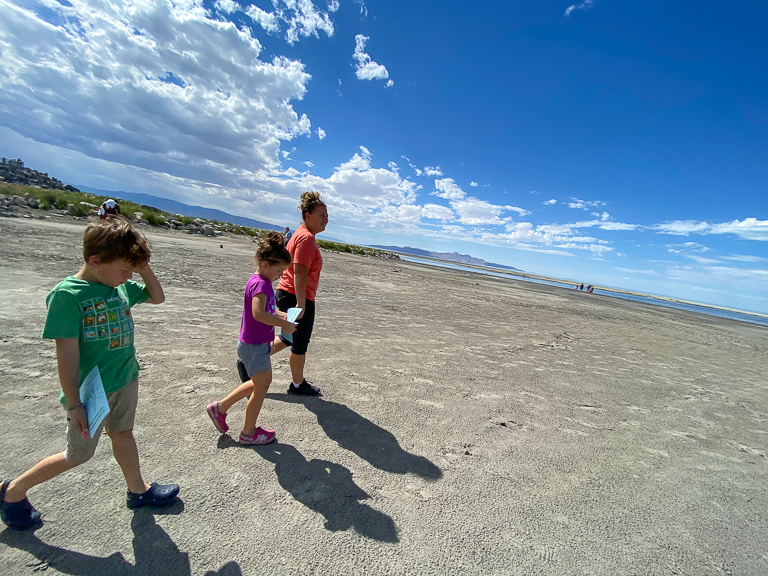 Getting close to the water. Want to dip your hand in?
Theresa - What is that black layer around the water? 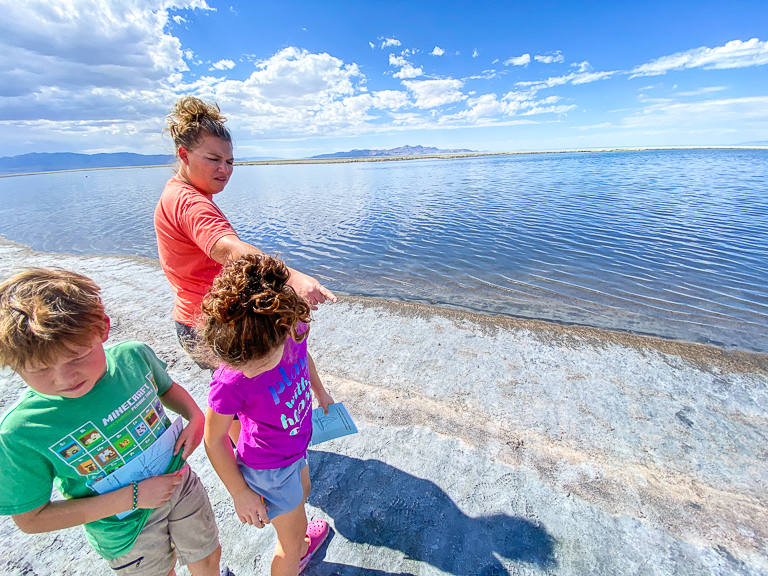 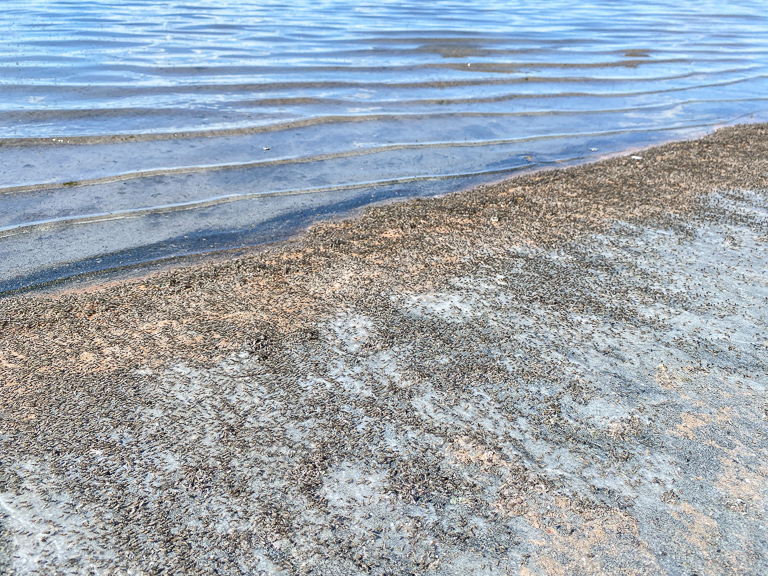 Still want to touch it Theresa?
Theresa - Just the smell makes me want to sanitize my hands.
We learned later in the Visitor Center that these were Brine Flies! They are a bit annoying, but they're harmless and important for maintaining the ecosystem here. They keep the lake clean from algae and bacteria and provide a food source for many of the birds. It's estimated that there's 300 million individual flies per mile of shoreline. Wow. 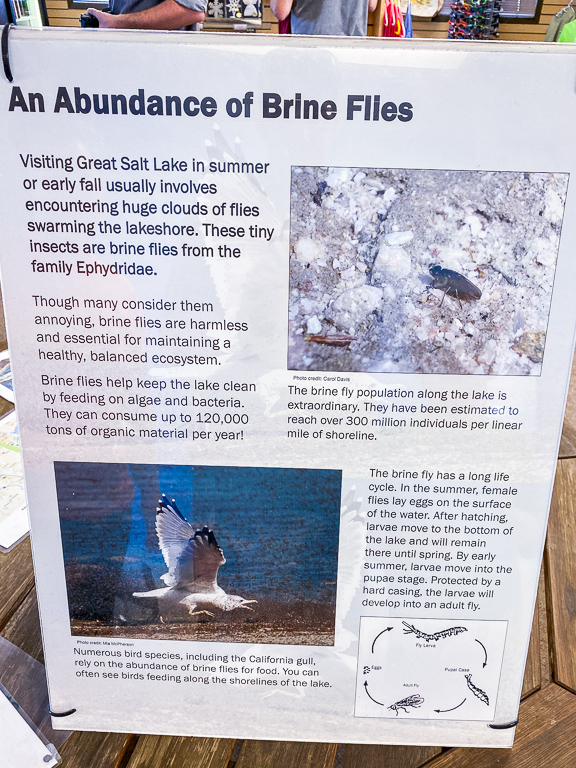 Walking further along the beach, there were depressions in the sand where water must have collected. Once it evaporated, a layer of salt was left behind. At 5x more salt than the ocean, our Lewis & Clark salt experiment would have made a lot more salt if we used this water! 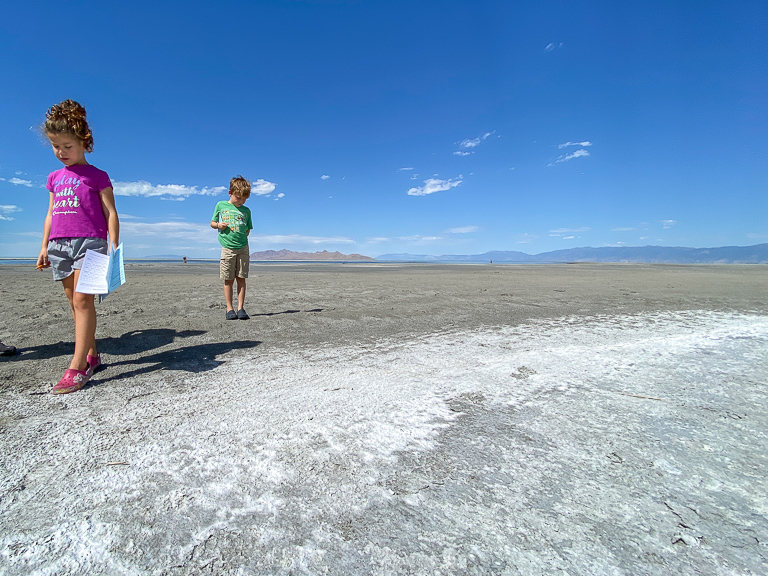 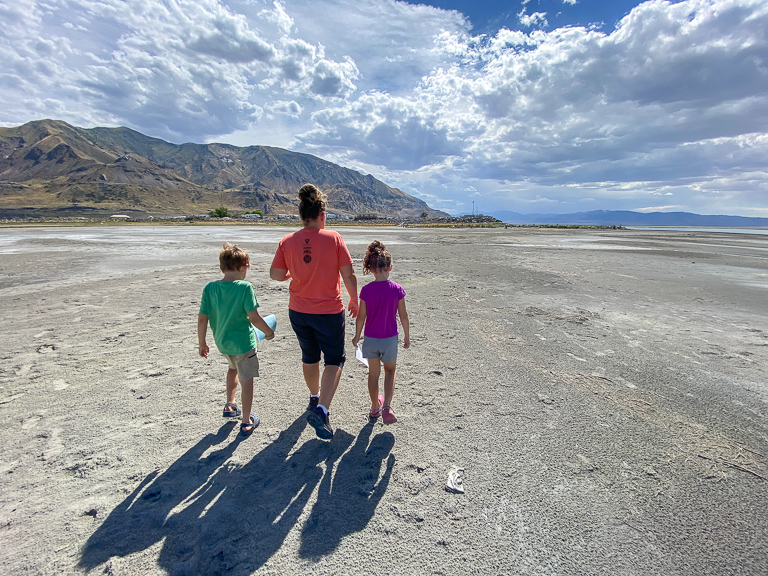 Let's go turn in our Junior Ranger booklets. Congratulations kids! I think this is your first State Park Ranger Badge! 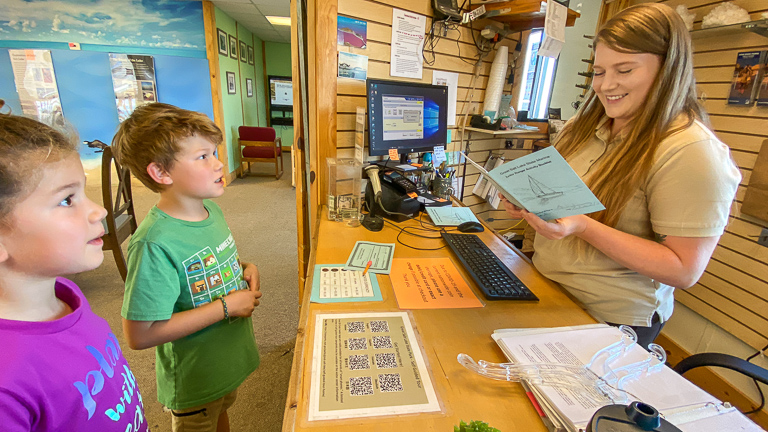