Welcome to Montana! We're in a new state and it's time to figure out a good pizza to represent Montana. In looking at all the different foods that Montana is popular for, one stood out. A meat pasty! Pasty in this case is pronounced PASS-tee. 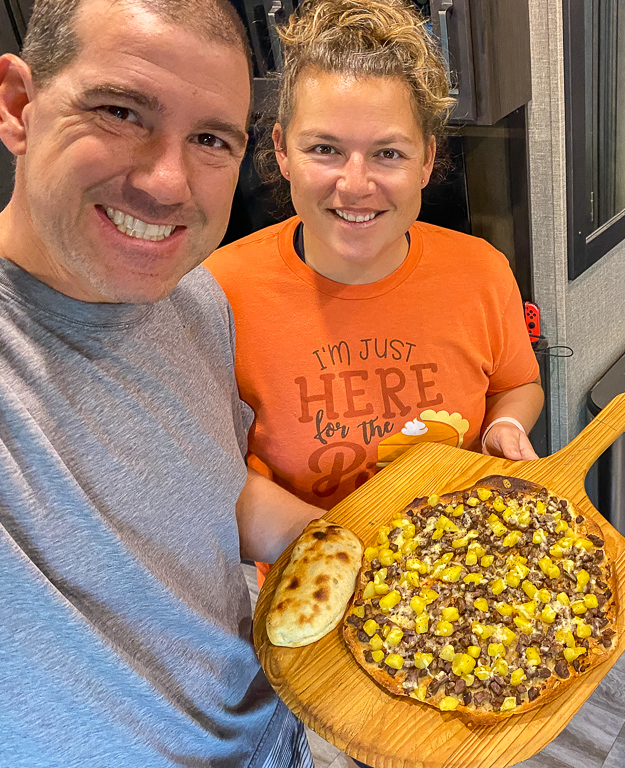 And so Theresa and I set off to make our weekly Sunday pizza and capture the Montana Pasty in it. 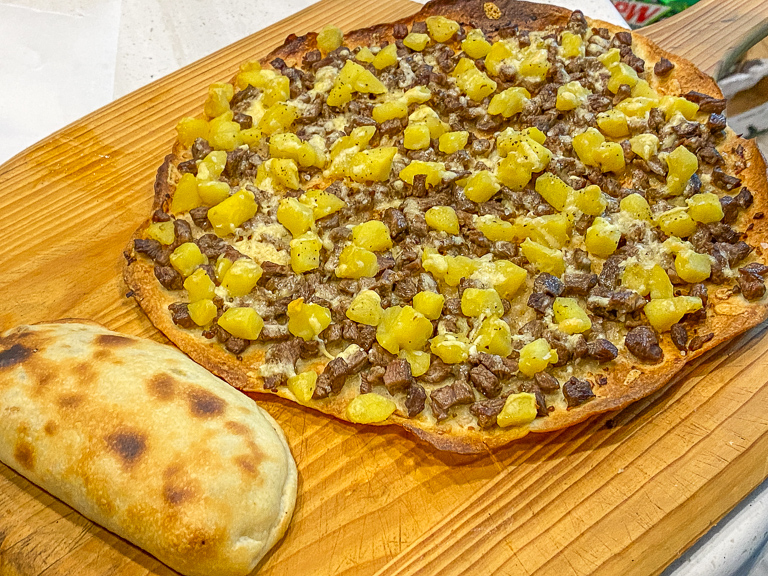 Truthfully, my first thought of a food from Montana is the Arby's Big Montana. A half-pound roast beef sandwich. I could make a pizza with roast beef, Arby's Sauce, Horsey Sauce, and more. Theresa didn't care for that idea and pushed harder for the Montana Meat Pasty. 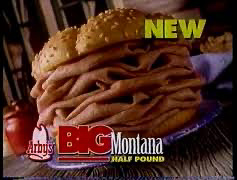 This is the "year of thin crust" and so I'll be making my usual thin crust pizza dough. Today I've got a special helper! 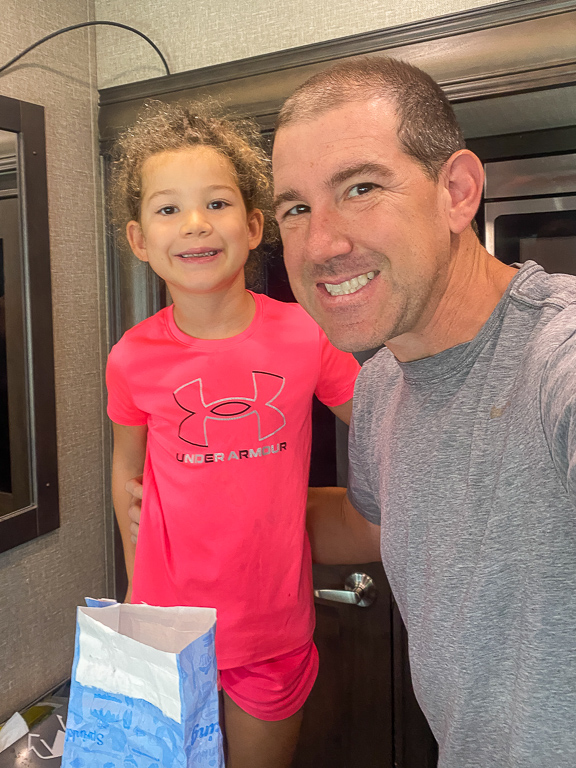 Alli helped measure out all the ingredients, stir all the dry ingredients together. 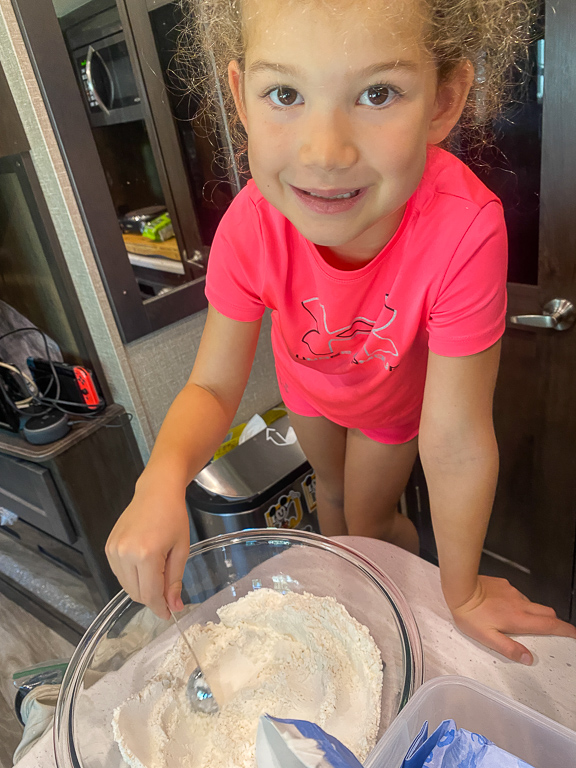 Then add hot water and oil and mix everything together. The pizza dough turned out perfect! Thank you Alli! 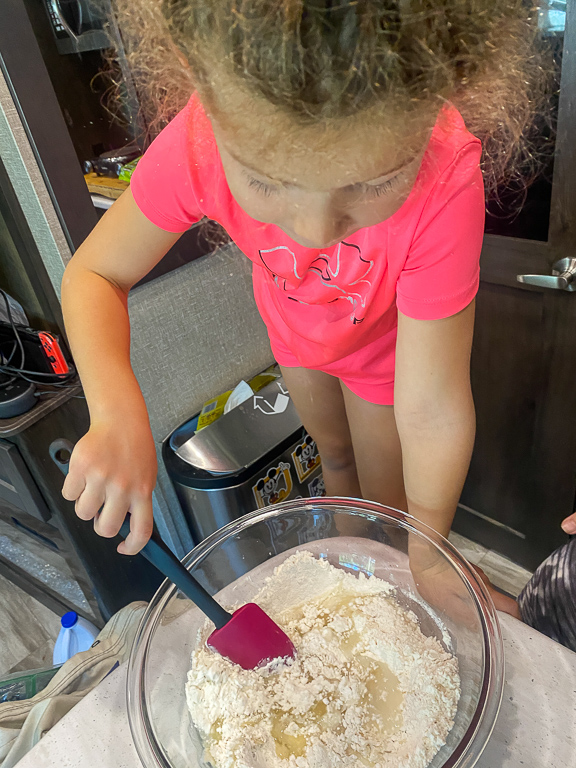 The ingredients for the traditional Montana Pasty are fairly simple. Potatoes, Cubed Chuck Steak, and Onions.
I started with a few small potatoes. 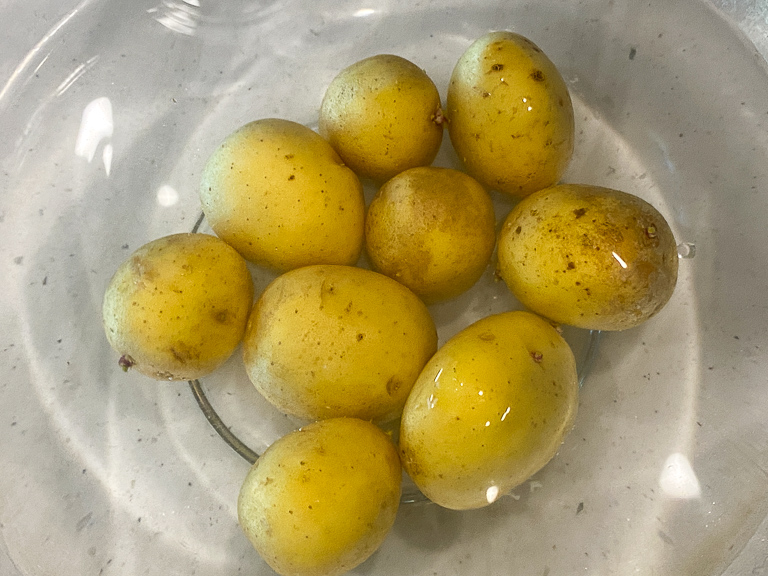 Peeled them and cubed them. 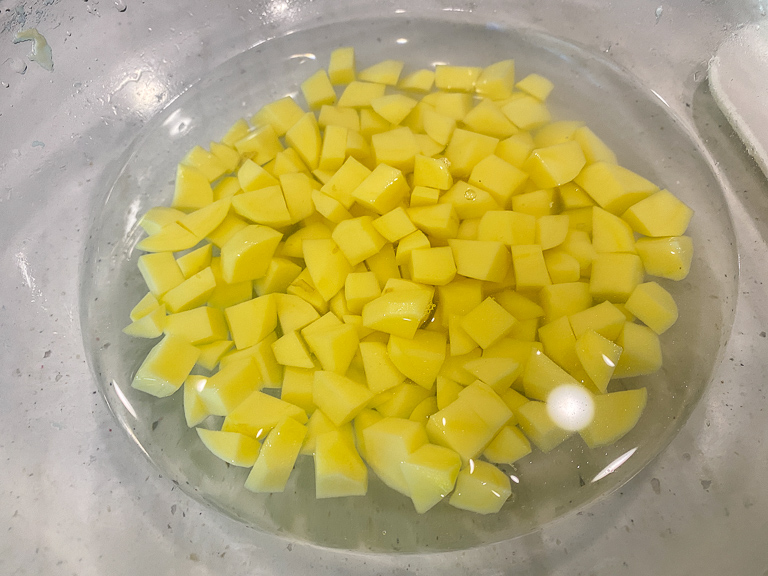 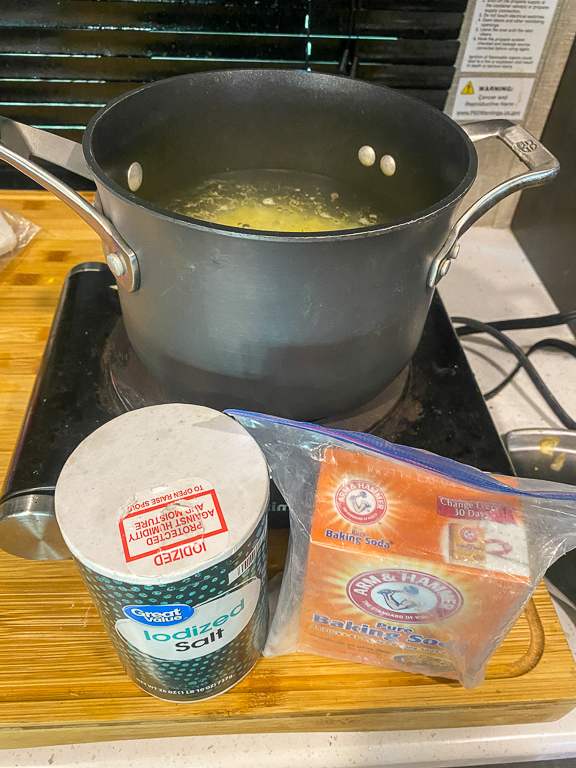 The meat is a chuck steak that I trimmed. 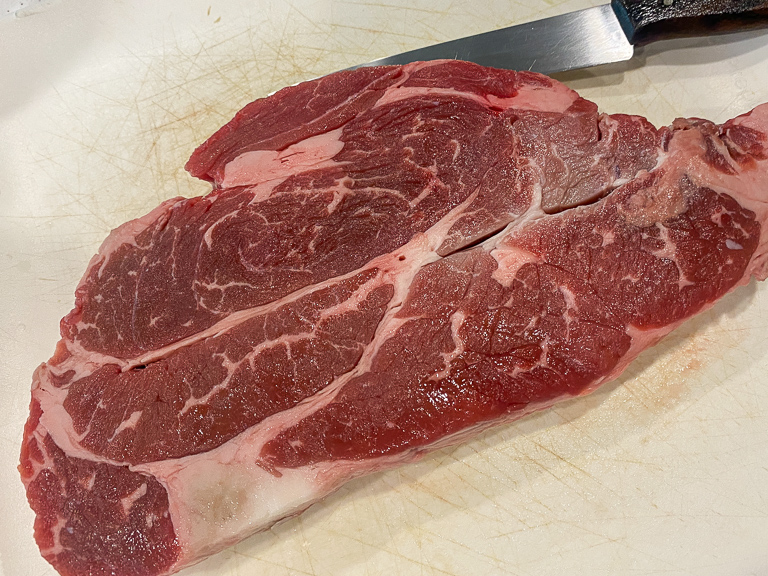 The recipe I read was very clear that the meat should be cubed and not minced. I tossed it into a hot pan as well, just to get some color on the outside. It'll cook enough in the oven. 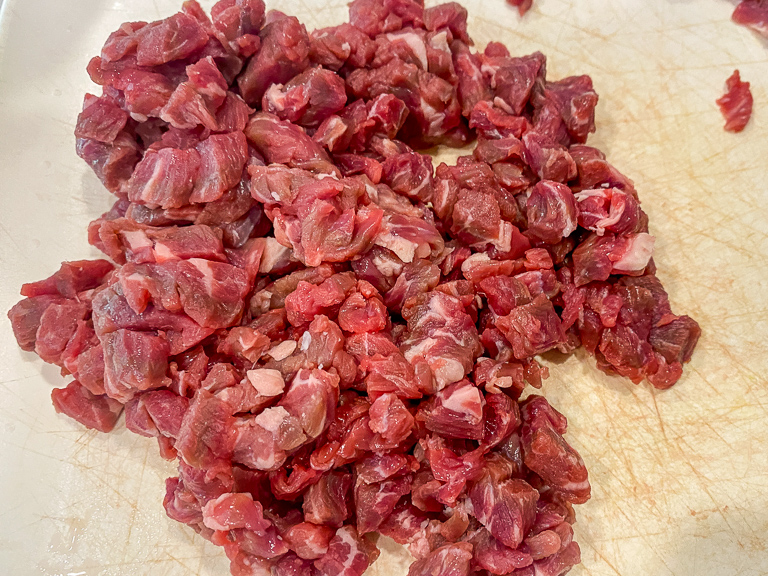 Last are the onions. I also added them to a hot pan to soften them just a little before they go on the pizza. 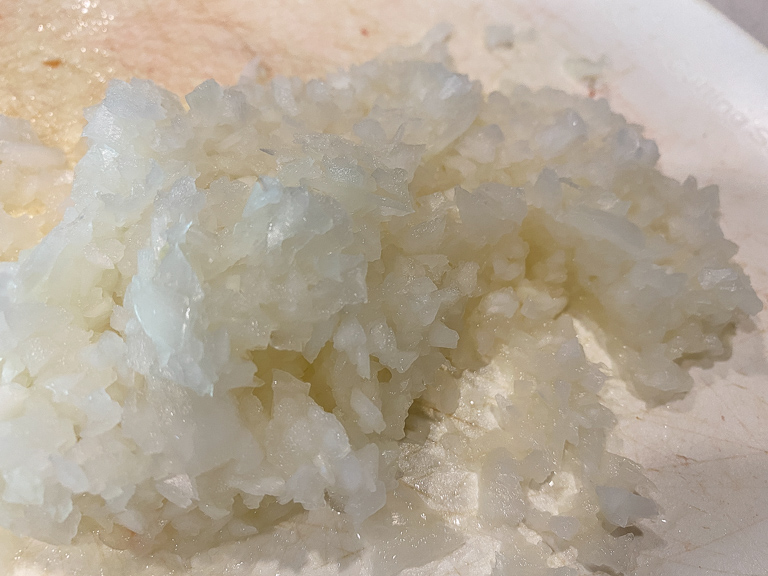 All my ingredients, ready to go on my pizza. 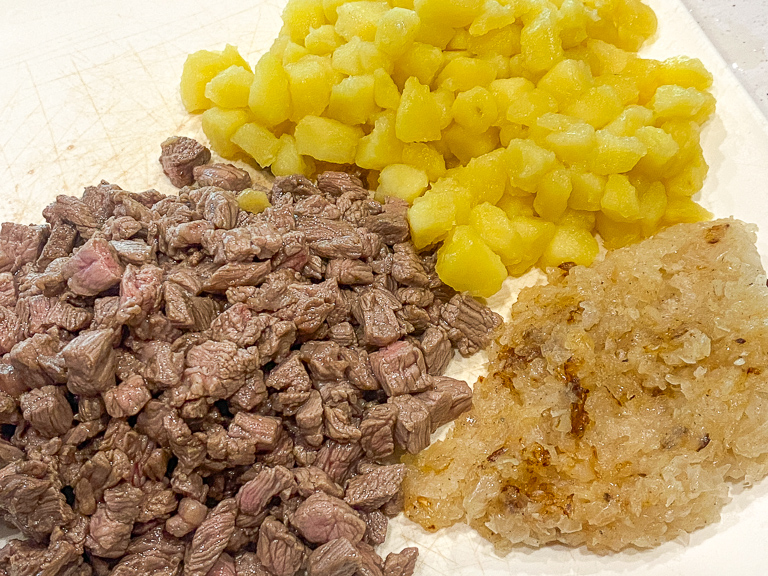 I rolled out my thin crust pizza dough between two sheets of parchment. It's the best way I know to make it extra thin and crackery, how my family likes it. 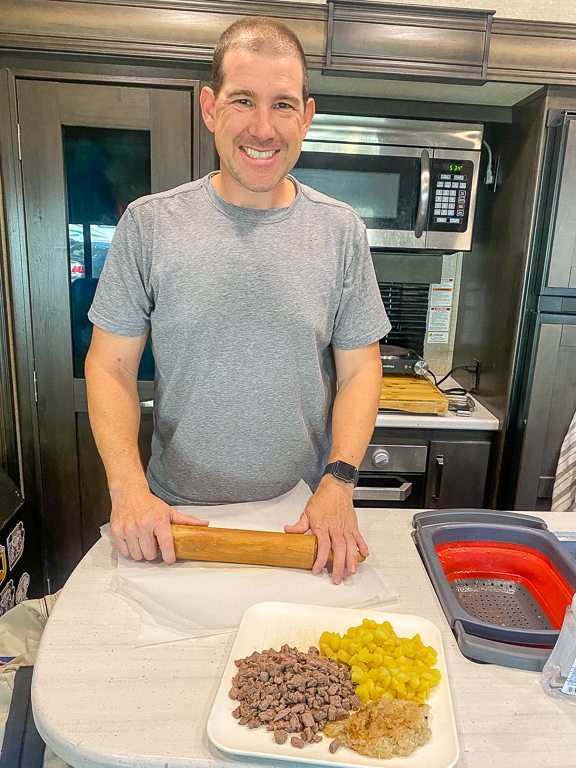 Because there's going to be a few toppings on this pizza I opted to pre-bake it for a few minutes to make sure it was crispy when it was all done. 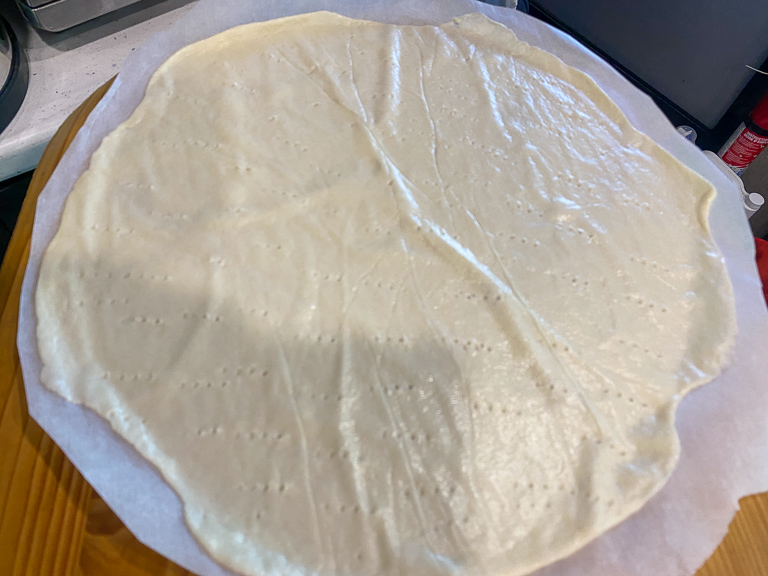 I started by spreading my diced onions over the crust. 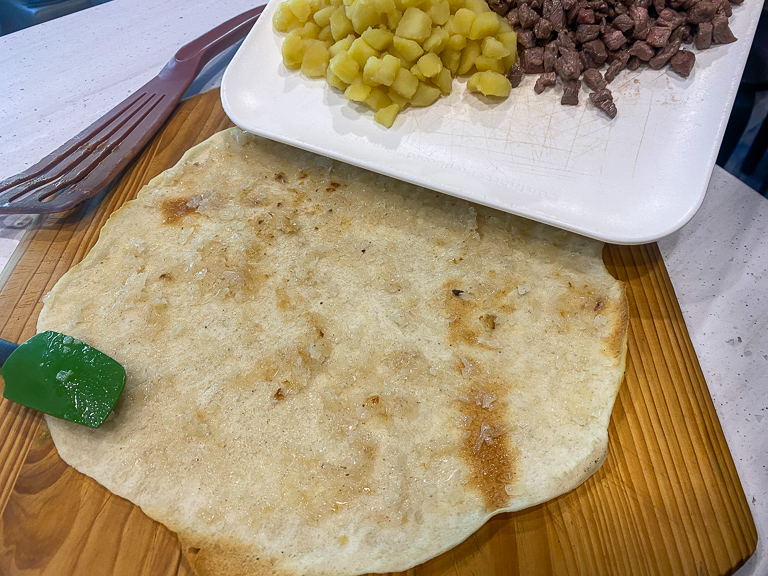 Then added my cubed chuck steak. 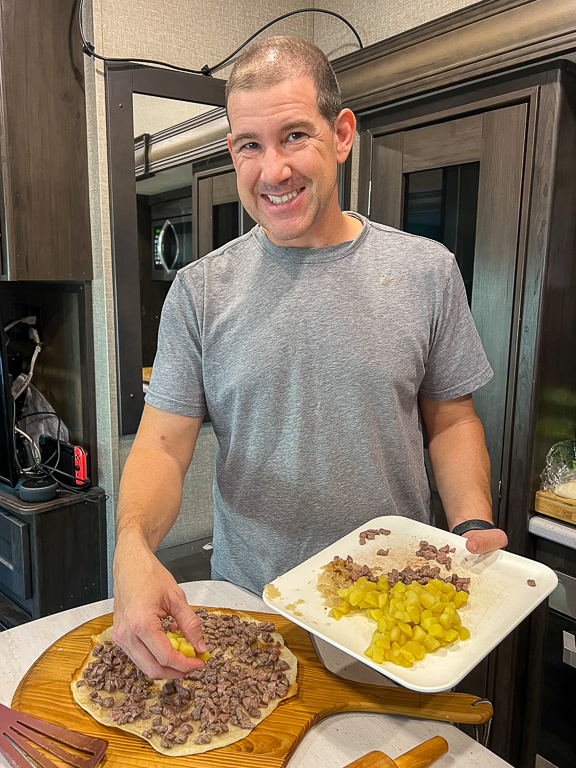 And then my potatoes. 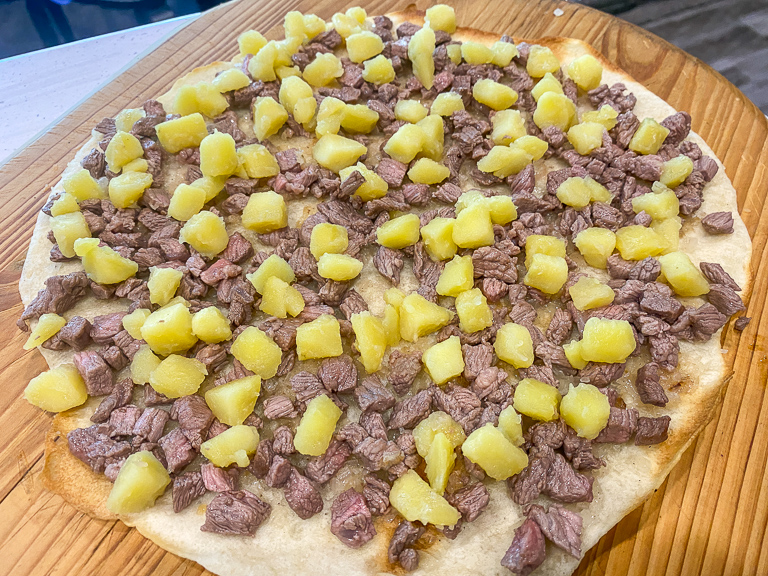 I added a kosher salt and pepper to the top for seasoning. 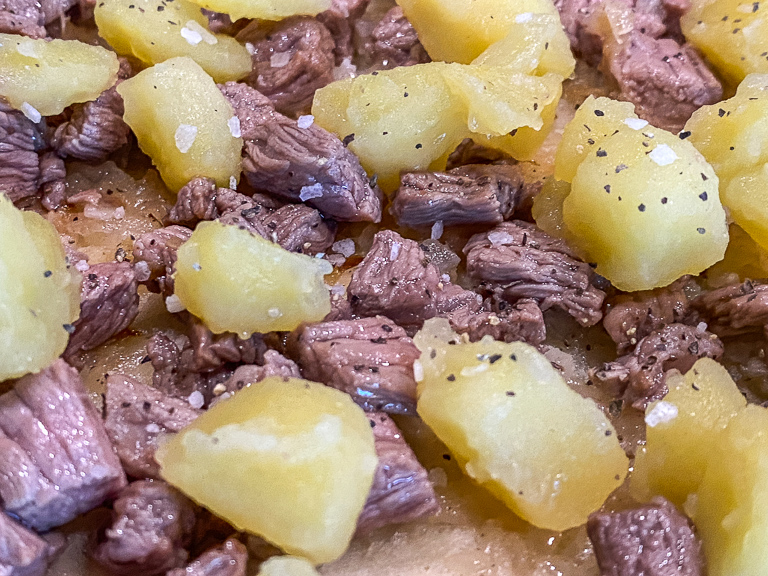 And... maybe just a little sharp cheddar cheese to go on top. 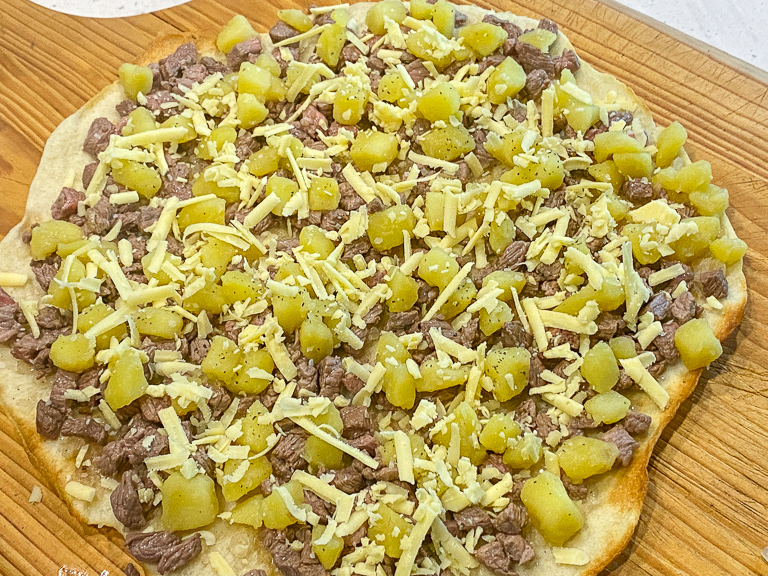 So that's a regular thin crust pizza, but I was curious, could I turn this into a pasty too? It won't be exactly the same. That pasty crust uses butter and an egg wash. I'm using my regular thin crust dough. It's an experiment, but I want to see how it will turn out. 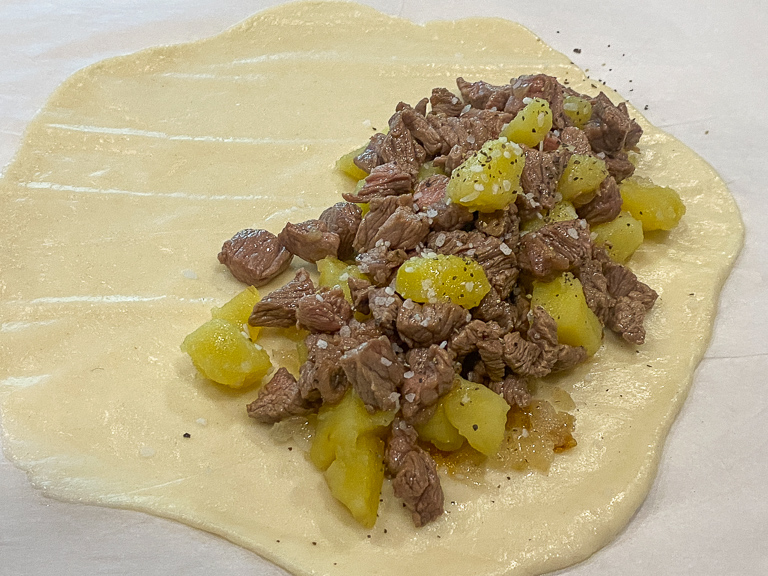 Making it on the parchment, I could easily fold it over on itself without overstretching this thin dough. 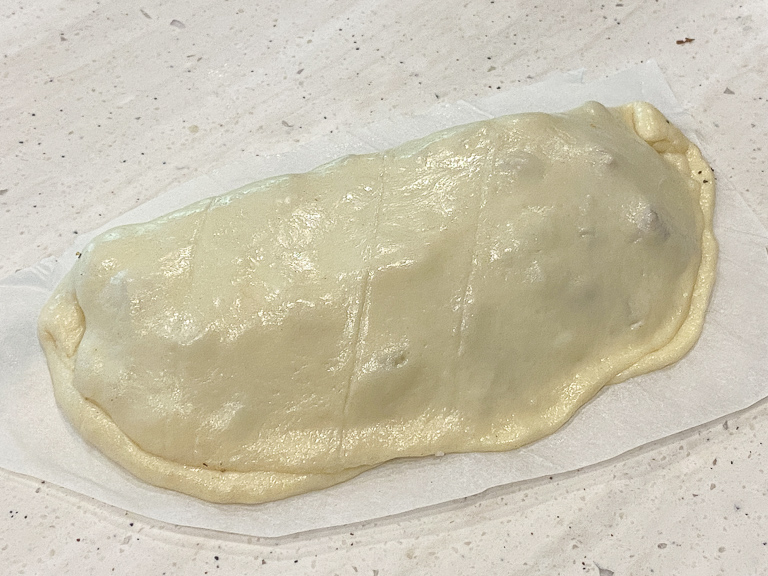 And this is how it looked coming out of the oven! Not bad I'd say! 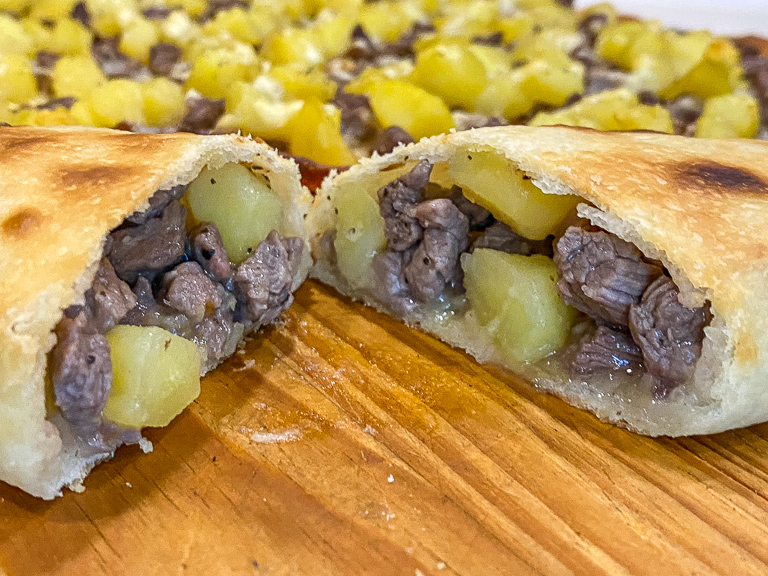 Theresa is just here for the pie. 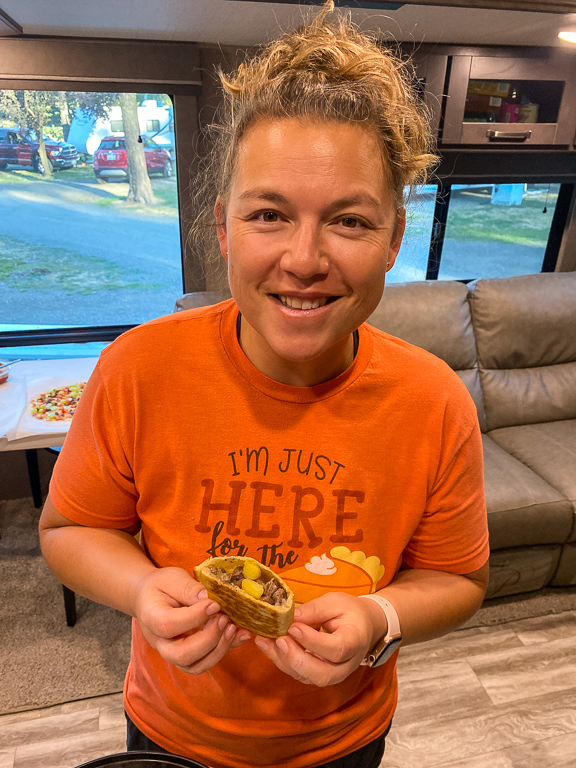 And that wasn't the only pizza we are making tonight either. The kids are starting to branch out from their usual. After the tasty pizza we had at the Starbucks Reserve Roastery, Alli really wanted a sausage and bell pepper pizza. Can do!
Ian is pushing for something a little healthier so Theresa suggested a bell pepper and olive pizza.
Ian - What about pepperonis?
Theresa - They're not that healthy.
Ian - Well it still should have pepperoni. 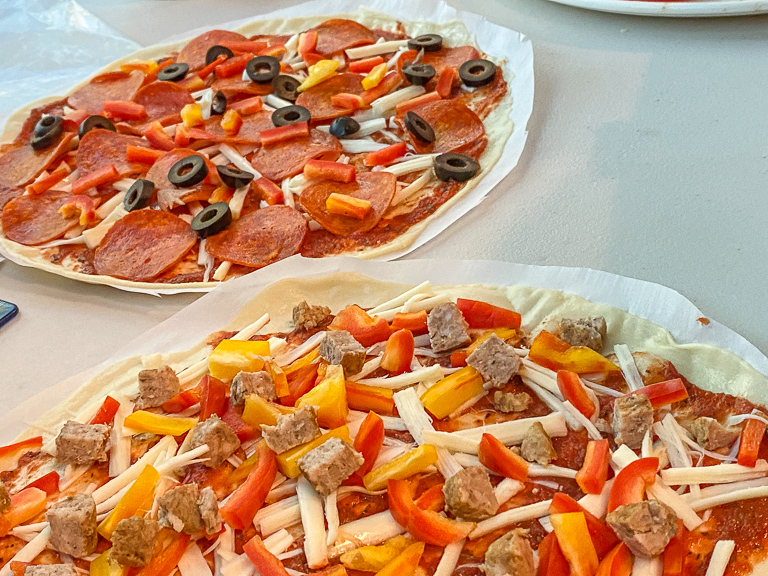 And there's a couple extra pizzas tonight too. The classic Therizza, this time with green grapes, plus a goat cheese and caramelized onion pizza just because I can. 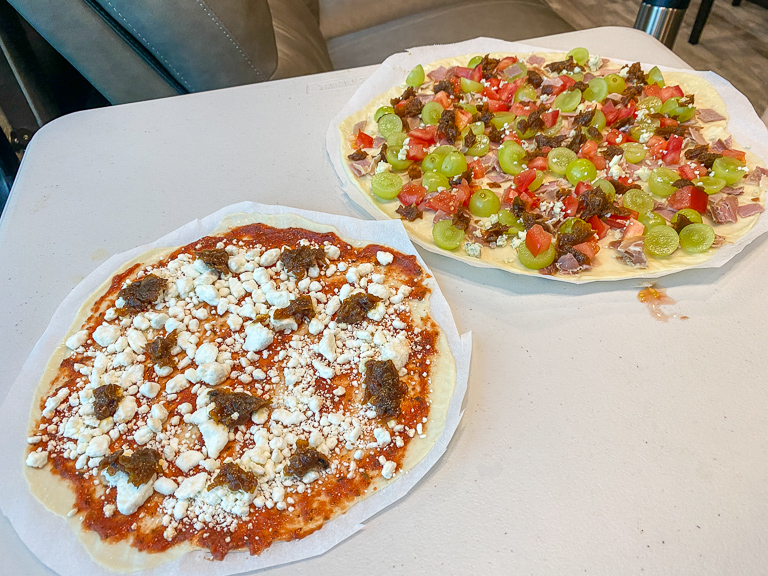 The kids scarfed down their pizzas. I'm happy they are exploring new toppings.
Alli tried the Montana Pasty pizza and gave it a "not bad".
Ian had a bite, but was not a fan. I'm still glad he tried it. 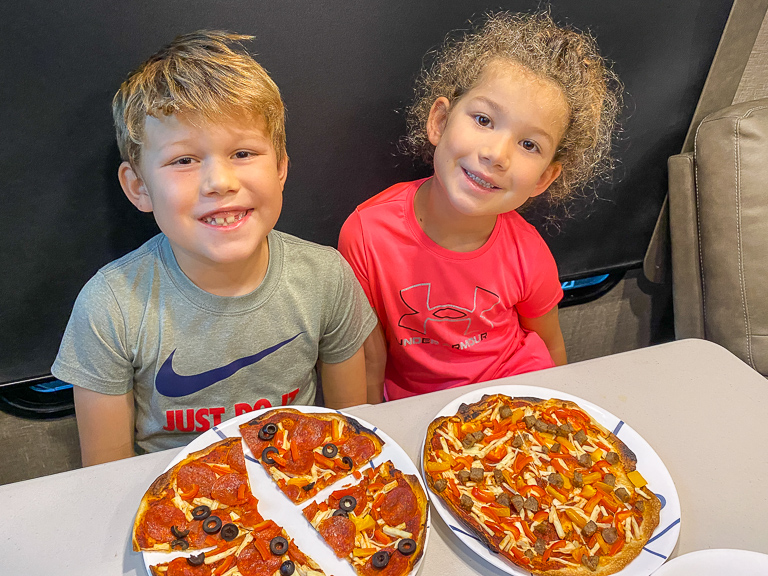 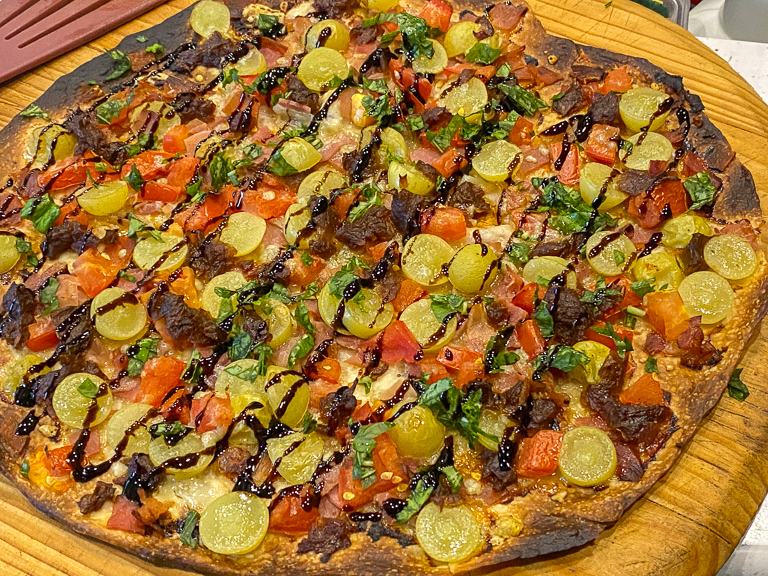 My plate tonight. The Montana Pasty Pizza was satisfying. The flavors worked well together, but it wasn't complex. It was good, but not especially memorable. I'm still glad I made it though! And now I know that my pizza dough can work for a pasty/calzone too! 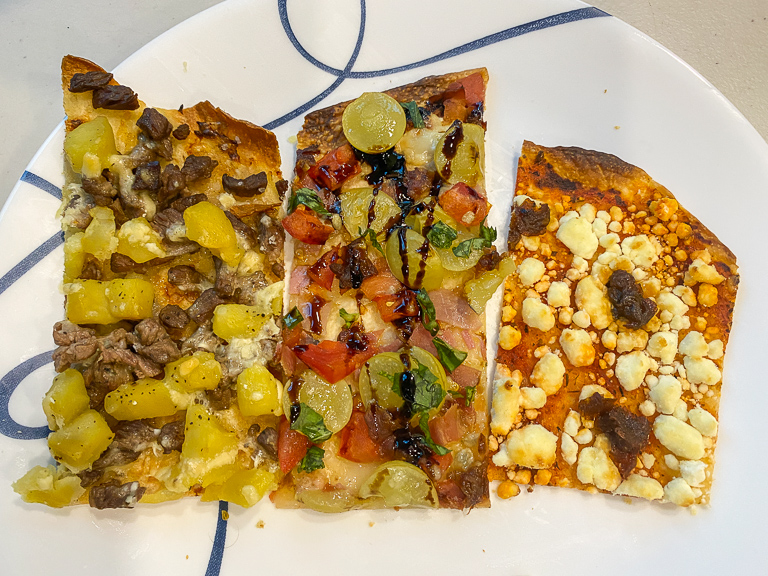