I think we can all agree that King's Hawaiian Rolls are delicious. These are a staple when big meals like Thanksgiving or Christmas come around. Soft and just slightly sweet, we love warming them, slathering butter on them and gobbling them up. 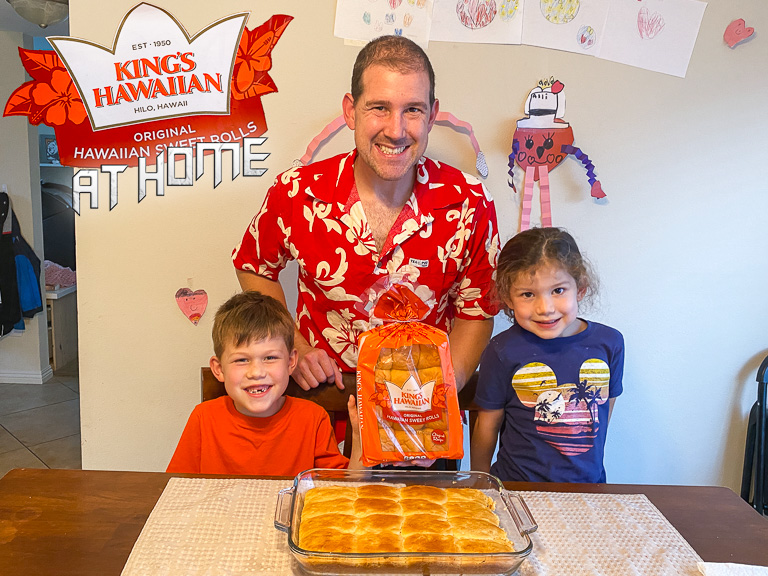 Theresa has a habit of sending recipes to me and saying "Oh look, here's a recipe for X." I'm certain there's no ulterior motive to it ever. Such was the case with these. "Look Joe, there's a recipe for Hawaiian Rolls." Okay, I get it. 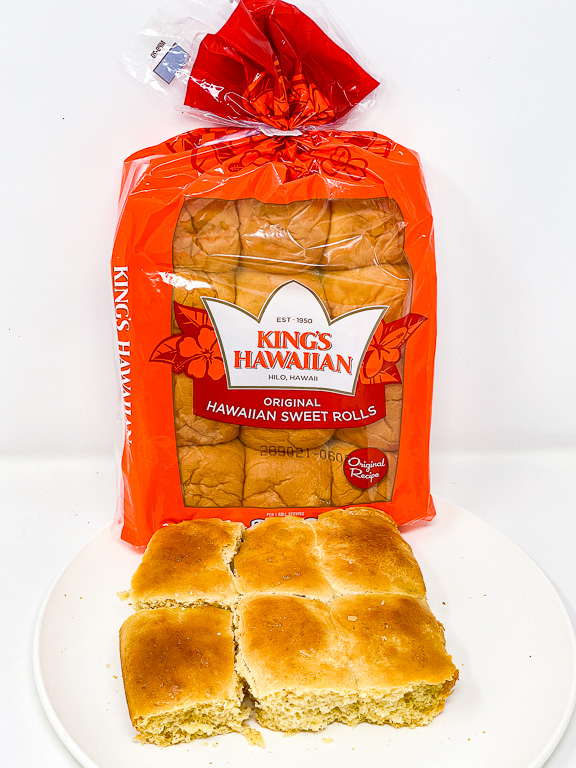 And so, on the weekend, the kids and I dressed in Hawaiian garb and set off to work. 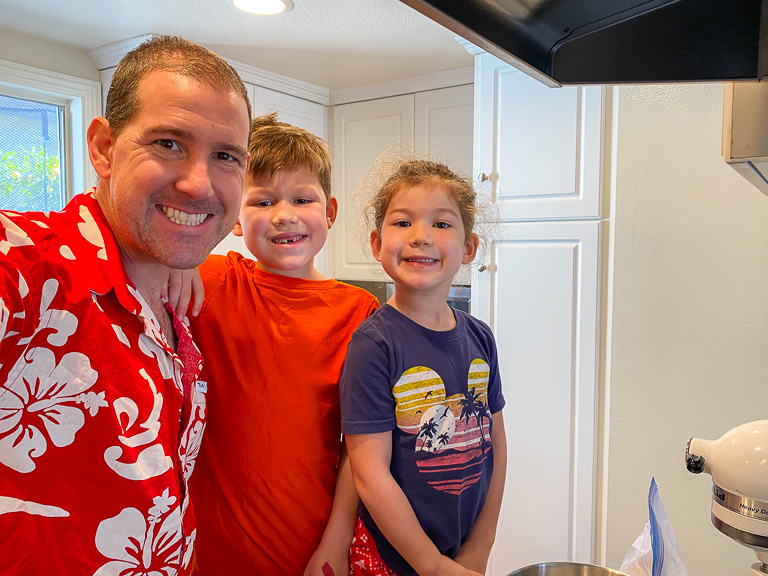 Our recipe today comes from KingArthurBaking.com for Hawaiian Buns. I love when they write out recipes with the ingredient measurements in Grams instead of Cups. That makes it super easy to know that you're doing it right. There's two parts to this recipe. First we'll make a sponge. Ian added the water while Alli judged him on how close he got to the right amount. 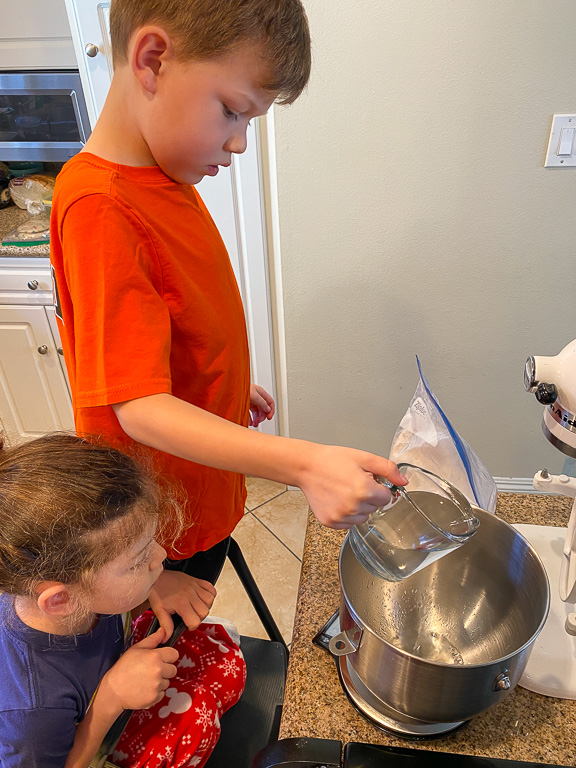 Alli sprinkled flour into that. 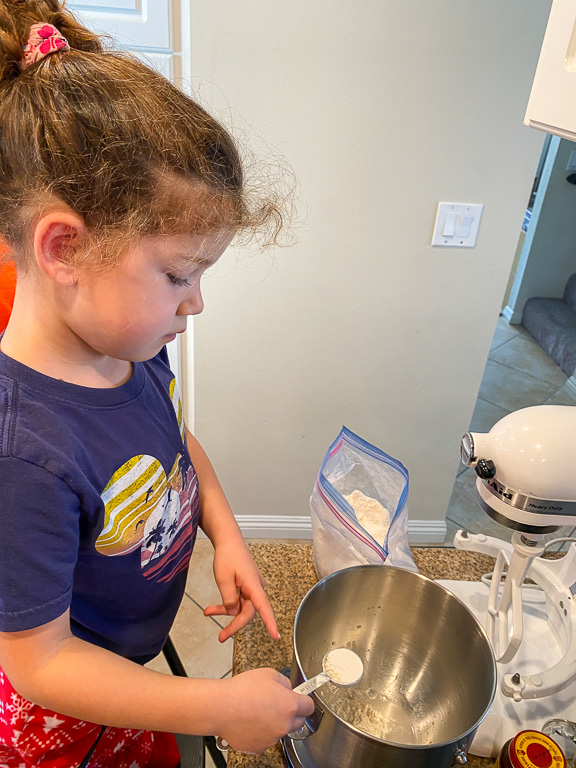 And I followed up with yeast. 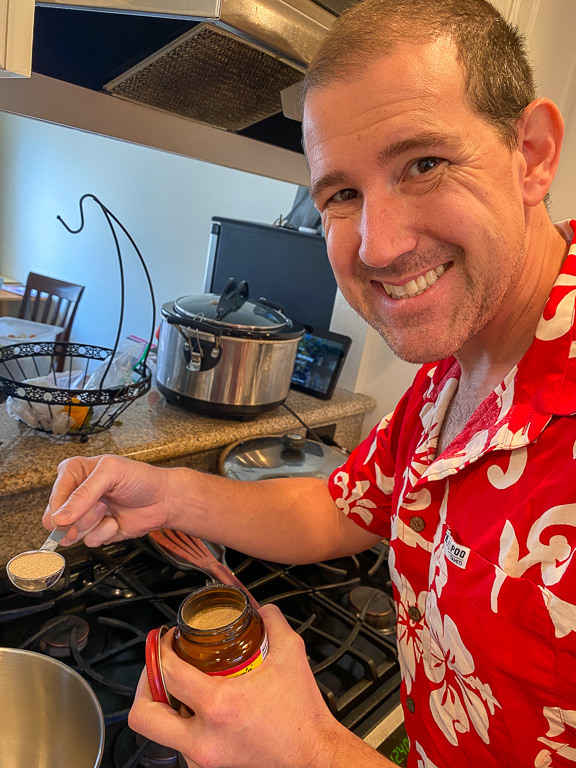 That's our sponge. That actually the first time I've ever made a sponge, and I'm curious what the point of it is. Regardless, this will sit for 15 minutes until we add the rest of our ingredients. 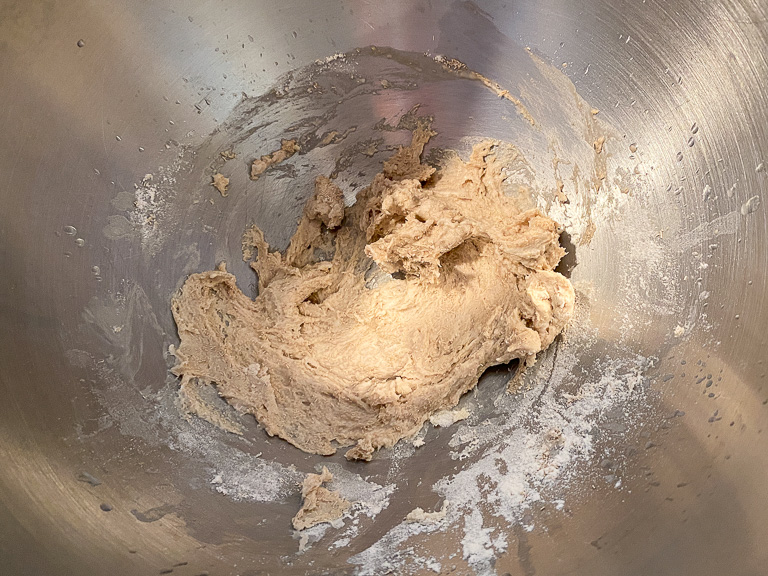 And speaking of the rest of the ingredients, here they are. Pretty normal for rolls, with a couple exceptions. 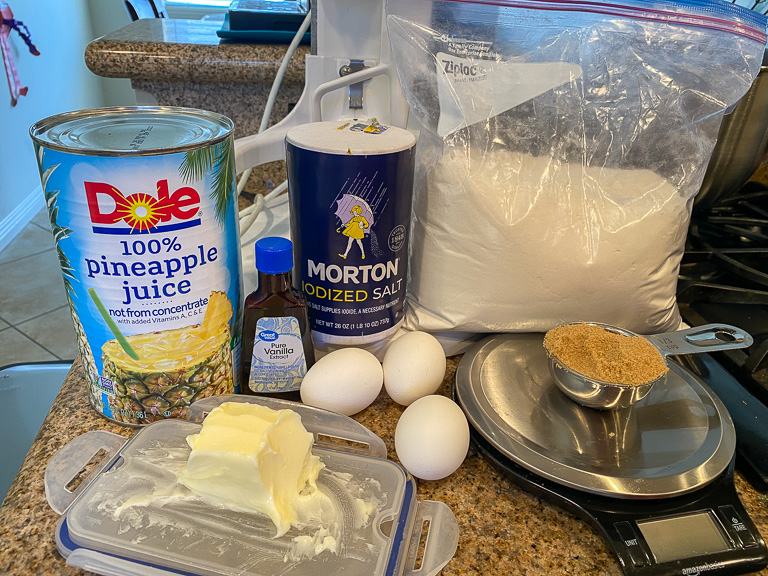 Ian poured and measured a tsp of vanilla. 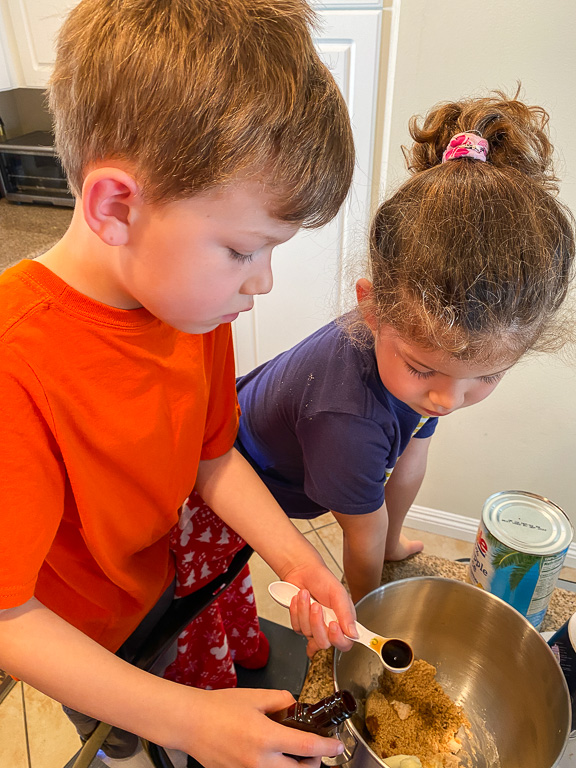 Here's something Alli hasn't learned how to do yet. This recipe calls for 2 eggs plus 1 egg yolk. I showed her the trip to pouring the yolk back and forth between the shells to separate it, then asked her to do it. She nailed it on the first try! 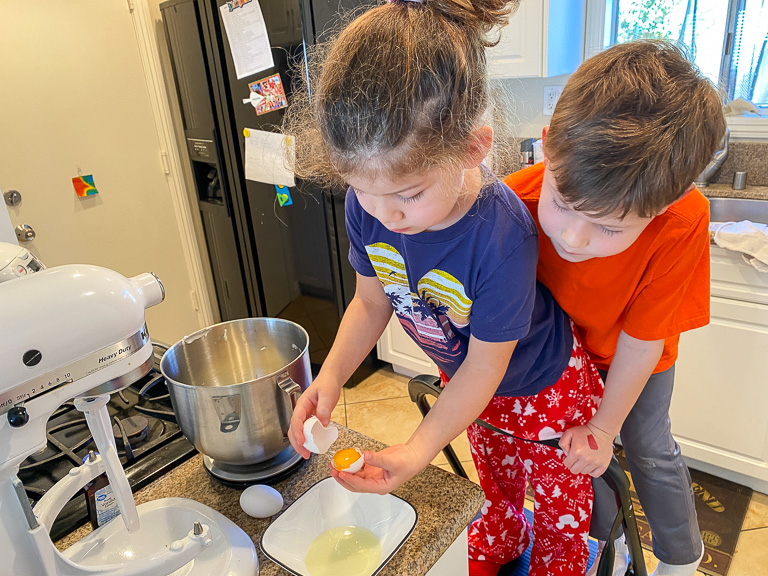 Besides the 2 Tbs of water in the sponge, there's no other water in here. The rest of the recipe calls for Pineapple Juice! 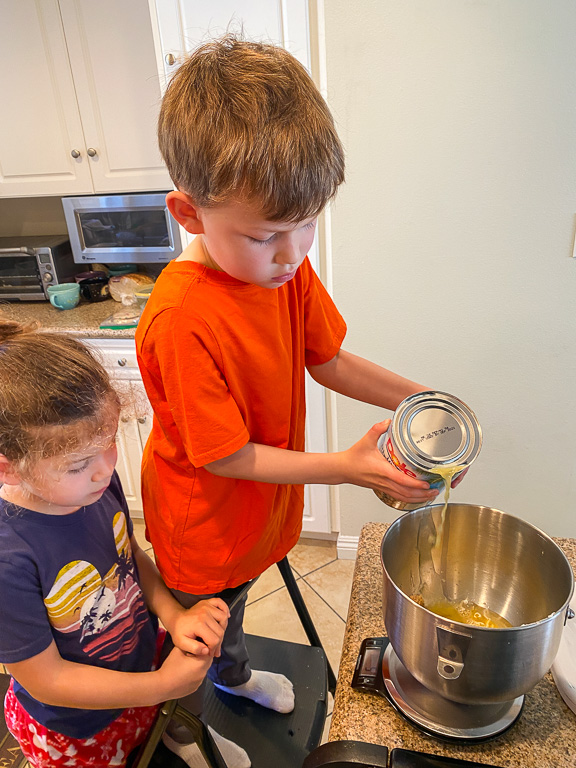 After that mixed together, it's time to weigh out our flour. 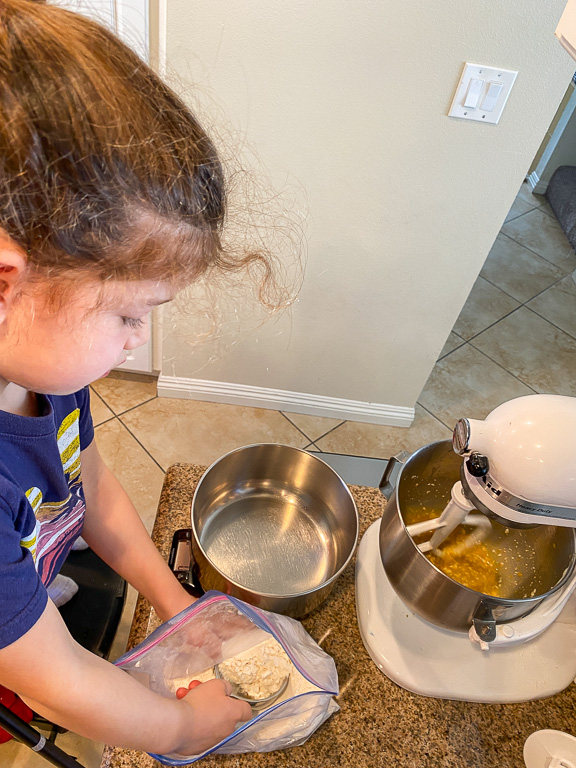 The comments say that this is a super sticky dough. I wonder how sticky is too sticky though. It suggested using the paddle attachment to start, and then follow up with the dough hook to knead it further. 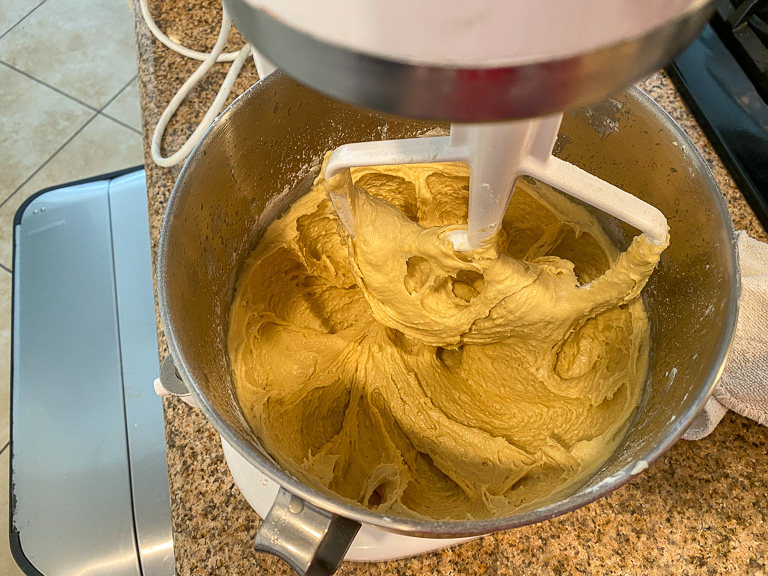 From there it goes into a bowl to rise. 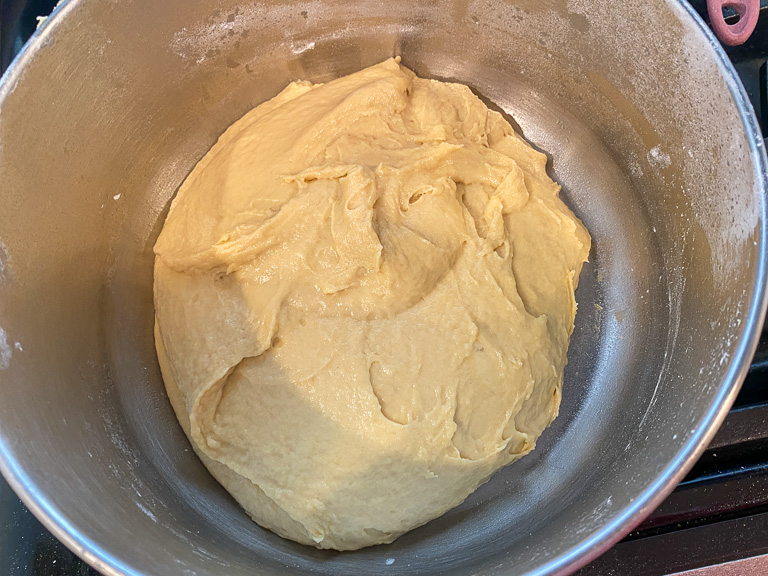 It was pretty slow, taking 2 hours to get to this point. 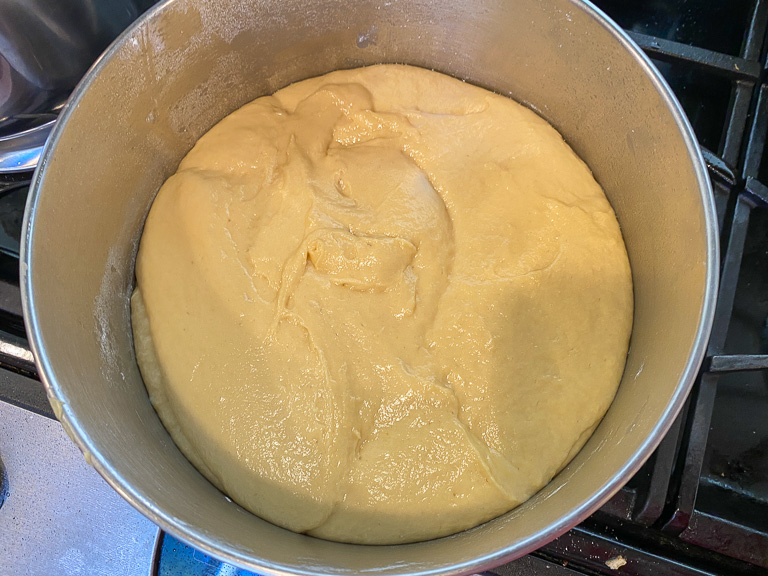 The kids helped me knock down the bubbles to prep for the next part. 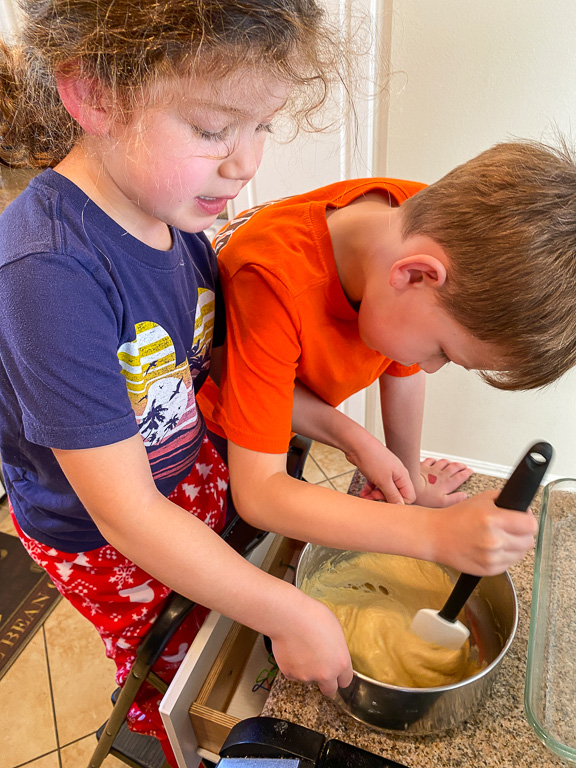 We weighed the dough, then used a little bit of division to figure out how much each roll should weigh. The comments section of the recipe suggested oiling your hands when trying to form the dough into balls. 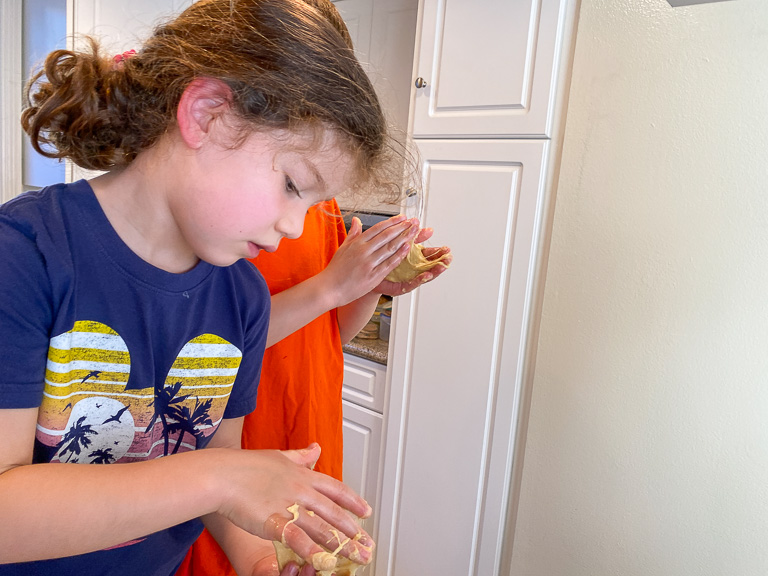 At this point, I'm thinking that the consistency isn't quite right. These aren't forming into a ball. If I were to classify this as a state of matter, I'd lean more toward Liquid than I would Solid. 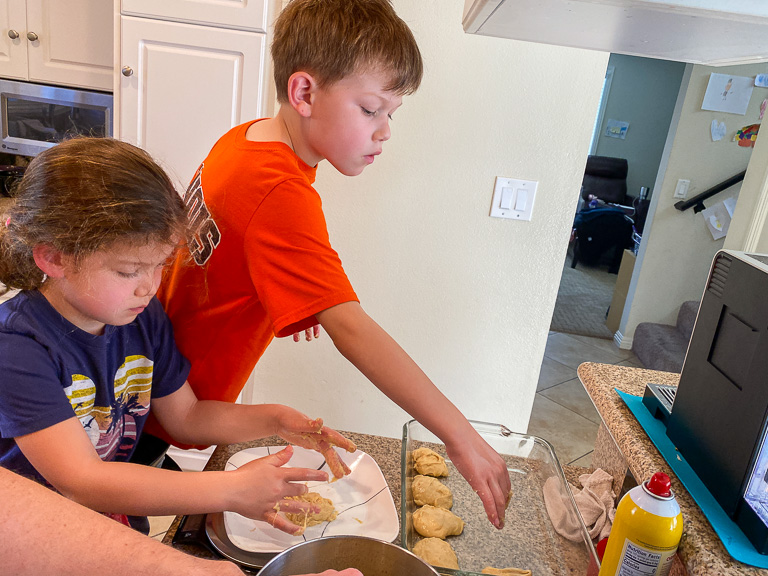 Sixteen of these lined a glass baking pan and then went into a warm spot to rise for another hour. 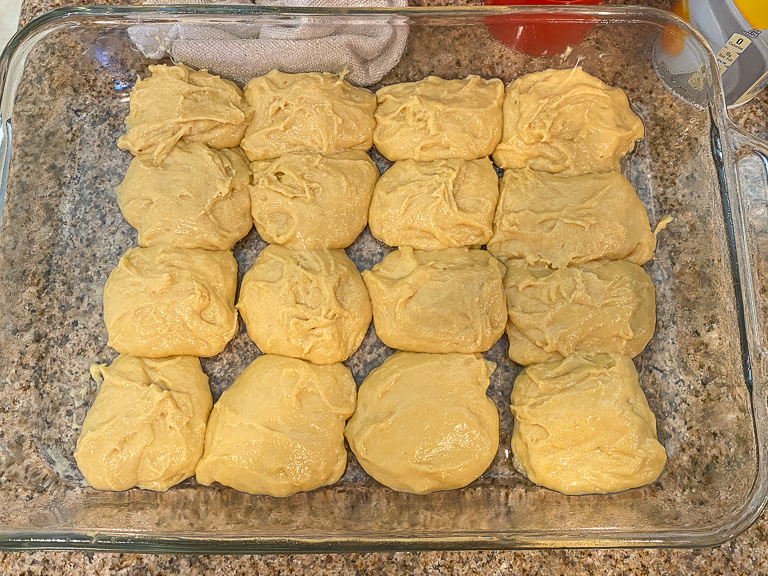 Once they had doubled, Ian and Alli lightly brushed the tops with the other half of that egg that Alli separated. They baked at 350F for about 22 minutes. I used a thermometer to know when they hit 190F internally. The house smelled sweet at the rolls were baking. 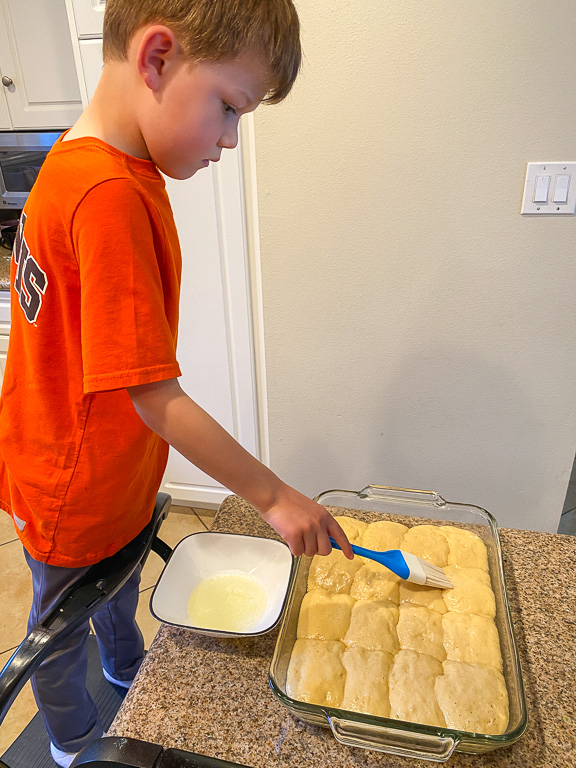 All done! They aren't so much individual rolls as they are one big mass. 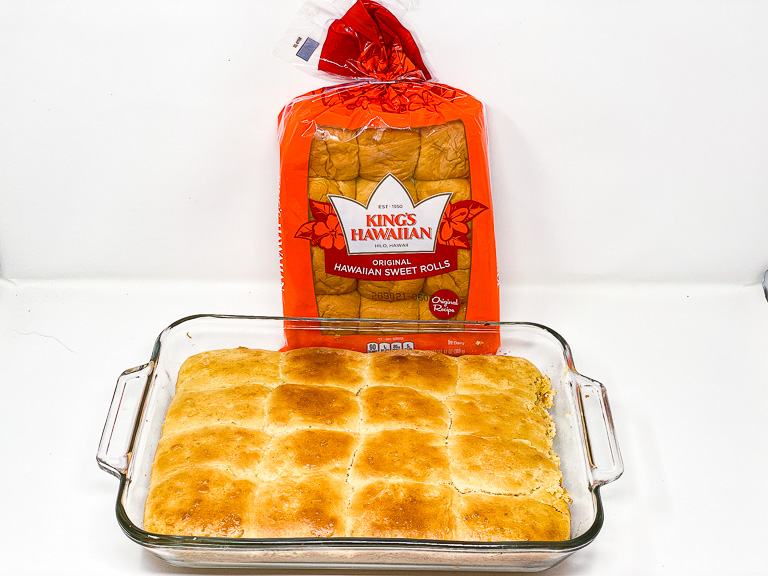 The texture wasn't quite right, nor was the color. The original has a very fine structure and is white. Mine were very crumbly and pretty yellow. 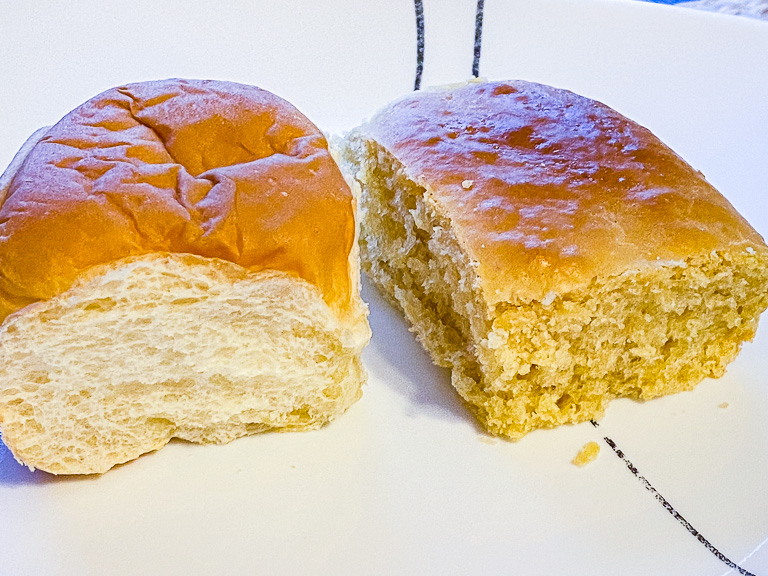 But let's put some butter on them and see how they taste. Alli said they were good, but she likes the original better. 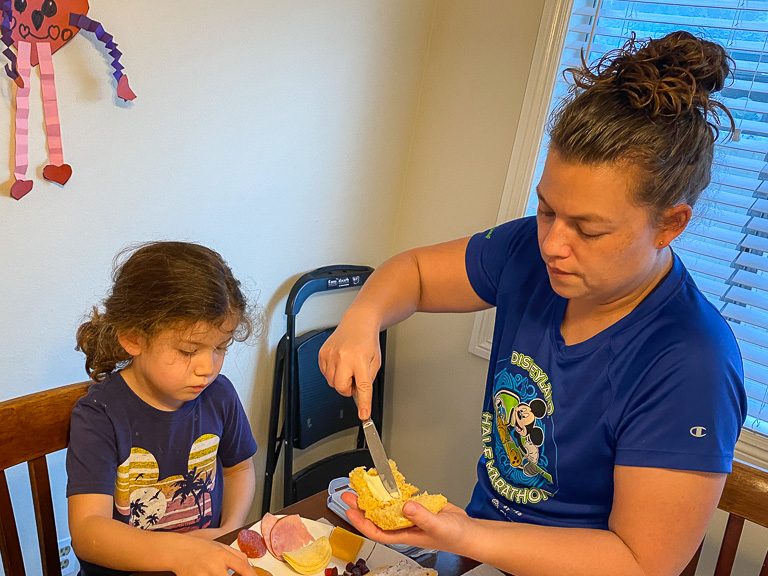 I think they have promise. Despite the brown sugar and pineapple juice, they're only a little sweet. They taste good, but I just need to figure out what went wrong with the texture. 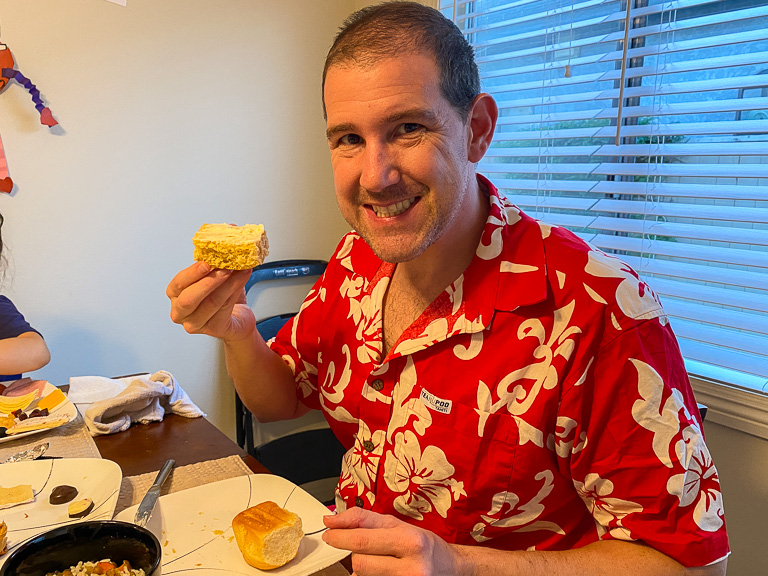 Chi thinks they are tasty no matter what their texture is though. 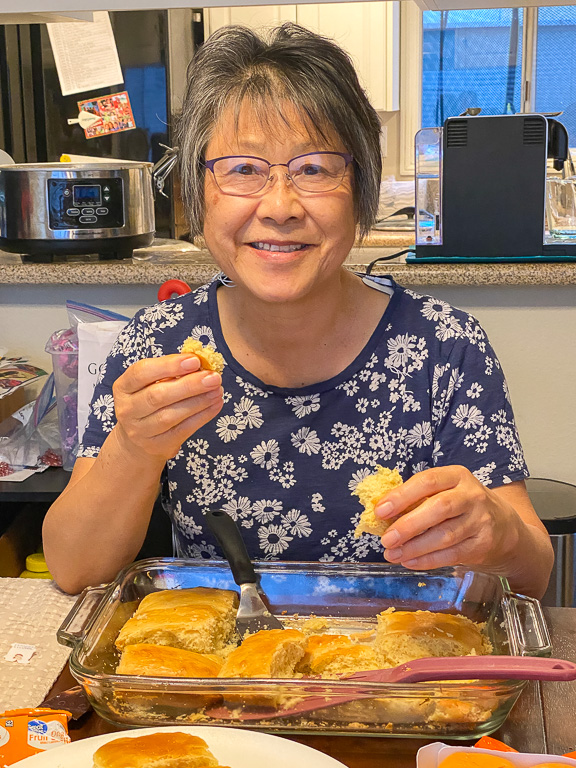 And Richard said he liked it, and I thought it was just Richard being polite. Then he went in for a second one, even though he's already had dinner. Then he grabbed a third and said that he really liked them, even more than the regular ones. I guess he wasn't just being polite! 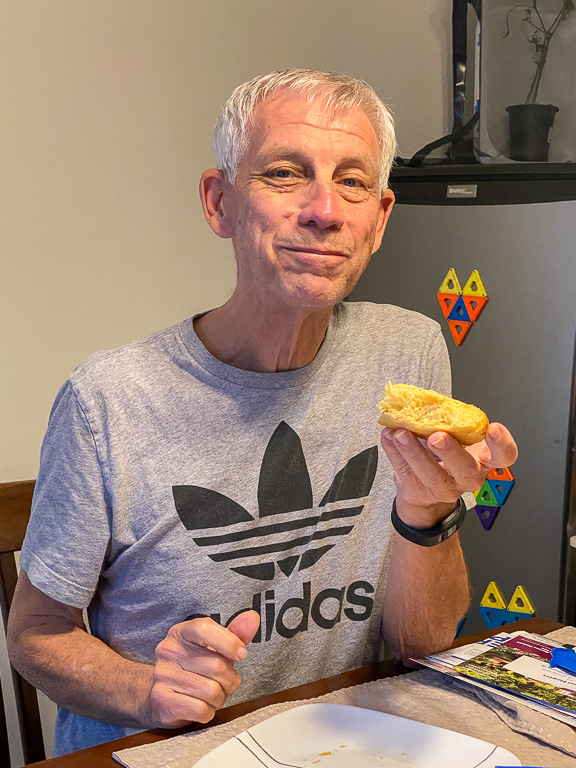 Overall, I'd still claim this as a success. It's also a learning opportunity for next time. 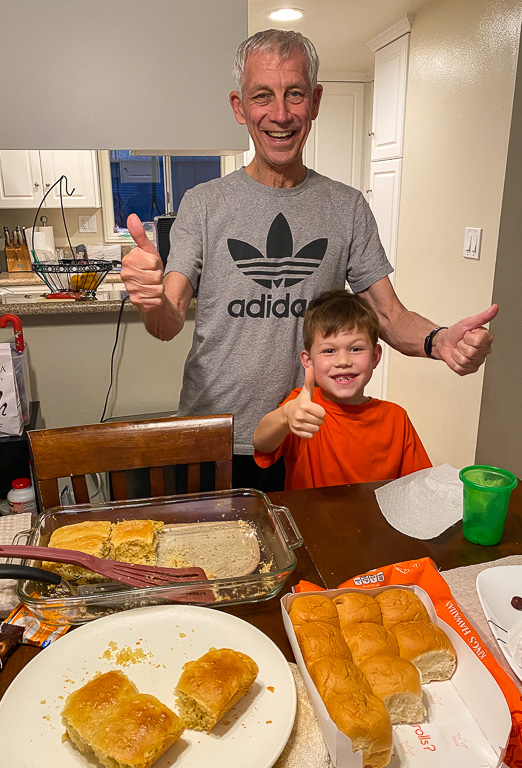