Because of all the different pizzas I've been making, friends like to send me their recommendations of what I should attempt next. Such was the case with tonight's pizza.

Both CNN and Nerdist recently wrote articles about Fong's Pizza in Iowa and their crazy Loopy Froots pizza. A buddy on Facebook shared it with me... Eh... 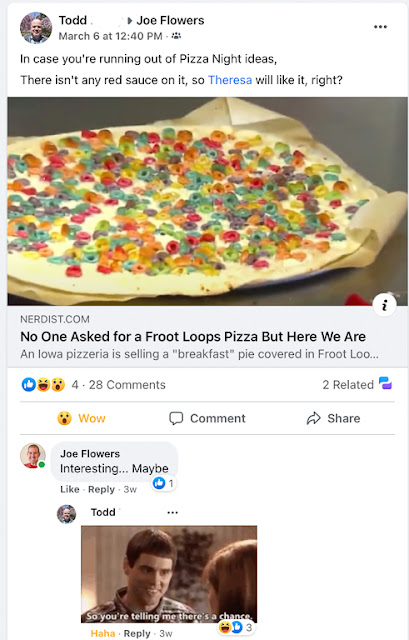 I showed it to Theresa and got quite the reaction. I think this was after I told her that they put mozzarella cheese on it too. Well you know with a reaction like that, I've got to do it! 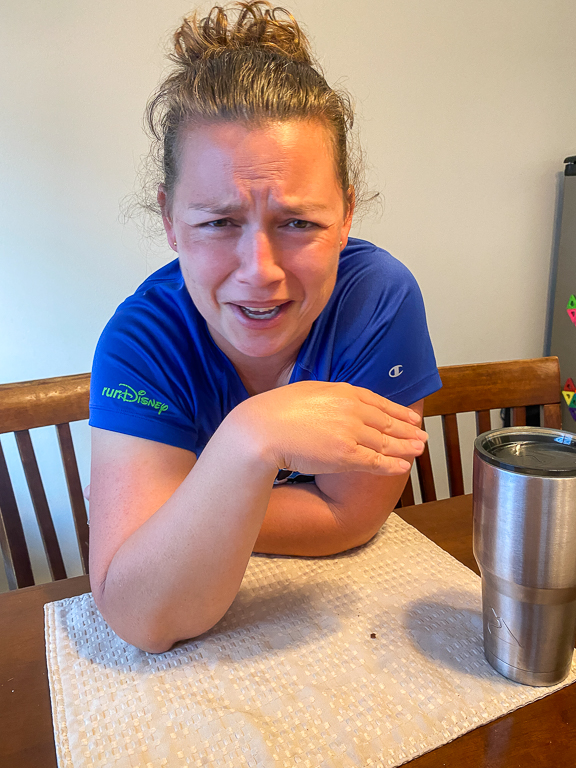 Similarly, Theresa's mother seemed equally disgusted at the thought of Froot Loops and cheese on a pizza. 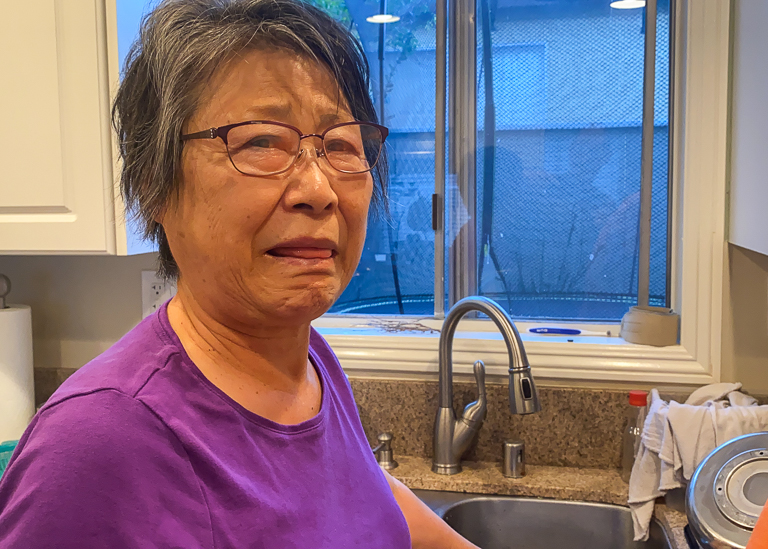 As it turns out, there were a few people interested in seeing me make this creation, so with the help of a few friends and some YouTube videos, I had an idea of what I was recreating.
The first thing I need to make is the base. A lot of the articles called it a sweet cream cheese base, but an interview with one of the co-founders suggested there was sour cream in there too. I whipped up a block of cream cheese, sour cream, and powdered sugar, until I was happy with the texture and taste. 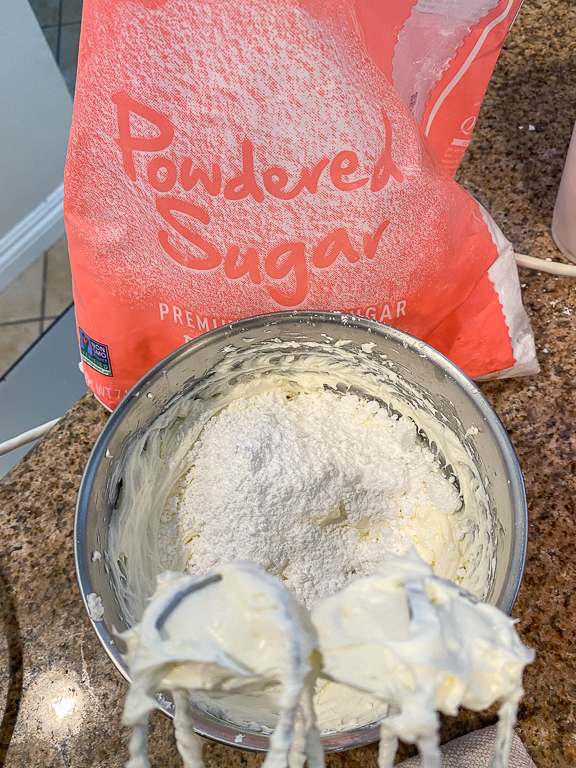 There's a drizzle that goes on top of the pizza when it's completed too, in a criss-cross fashion. That's made from condensed milk and greek yogurt. Again, I just mixed things until I was happy with the texture and taste. 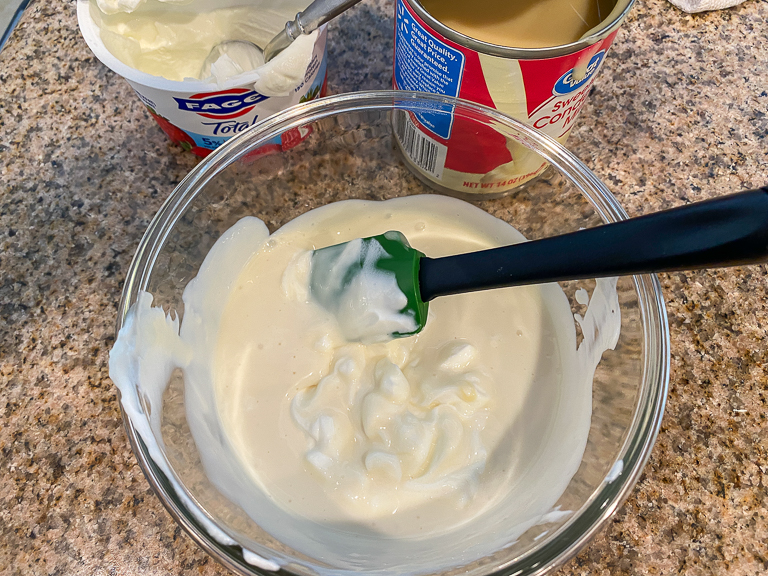 Fong's Pizza is a thin-crust style pizza, so I won't be using my normal recipe dough. Instead I used a recipe from thesaltymarshmallow.com for their Easy Thin Crust Pizza. After rolling it as flat as I dared, it was time to put all the ingredients together. 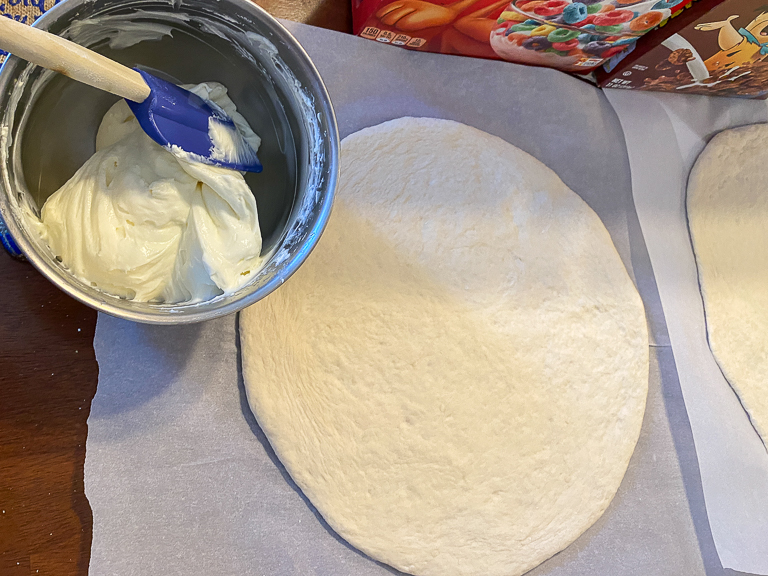 First, on goes the sweetened cream cheese base. 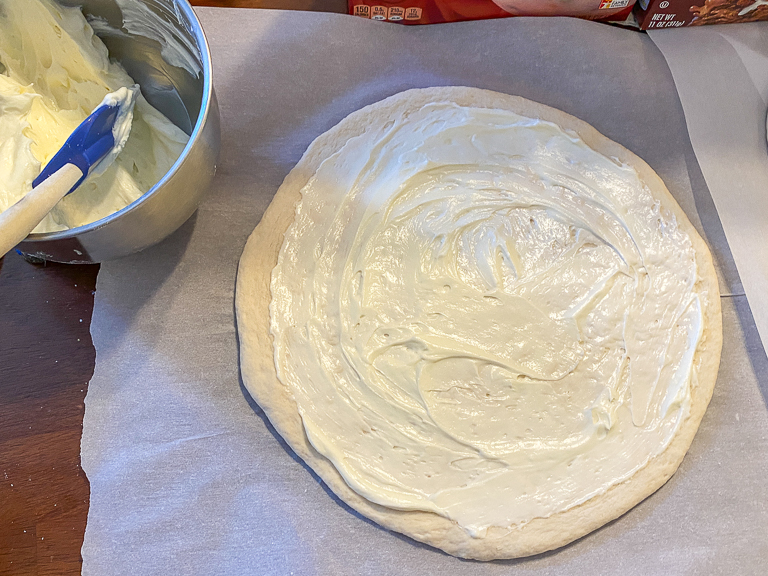 And then it's time for the Froot Loops! 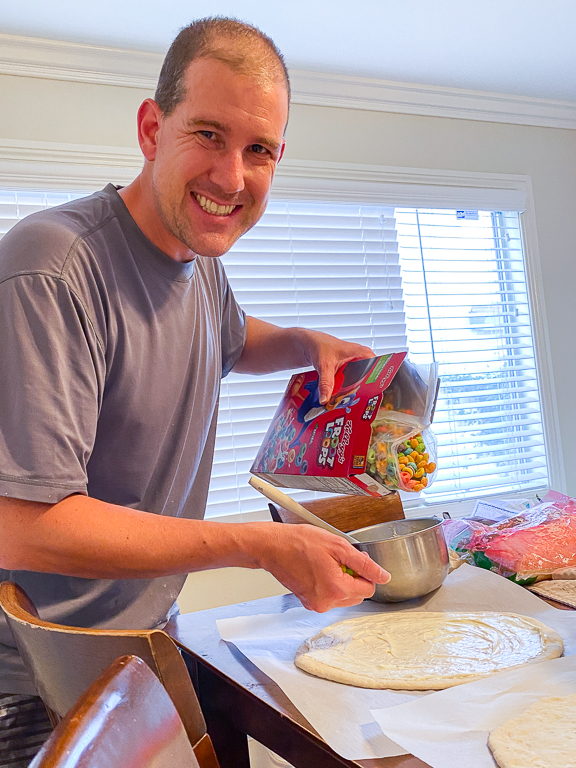 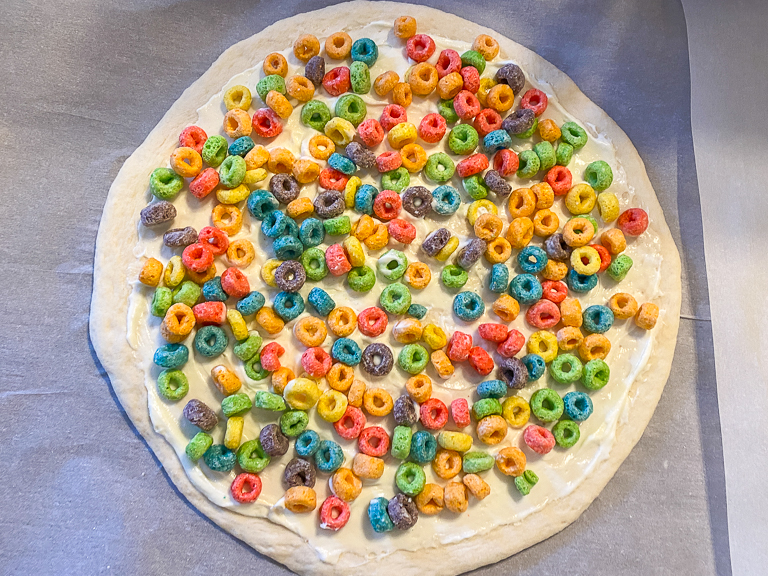 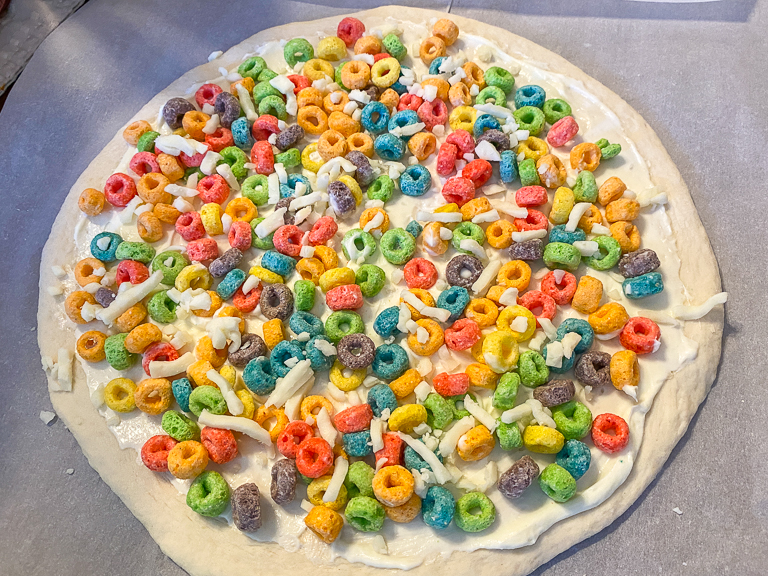 So when I was thinking about doing this, I was figuring why stop there? Fong's created a fruity cereal pizza, but how about a couple others? I decided to go with a Chocolate themed cereal pizza in the form of Cocoa Pebbles, and a non-chocolate sweet version in the form of Cinnamon Toast Crunch. 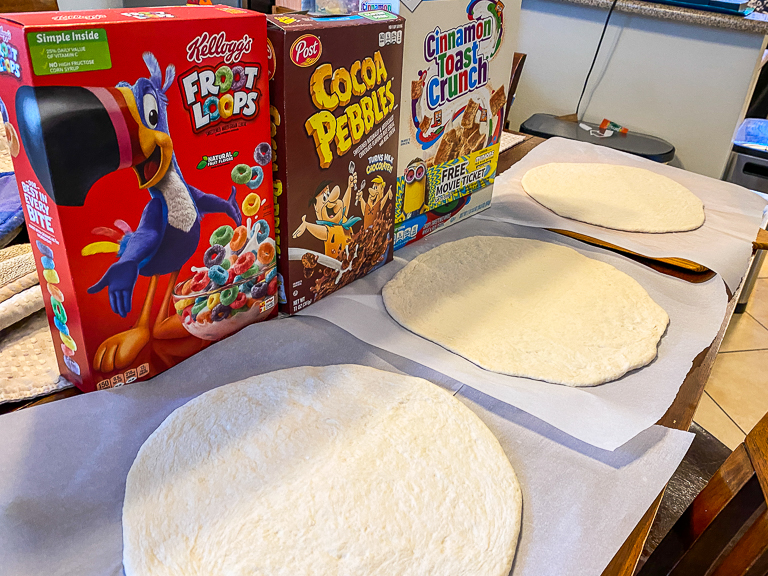 Chi was interested in how all this was coming together. I offer her a sample of the sweetened cream cheese base, and she thought it was great! Maybe this pizza won't be so bad after all. 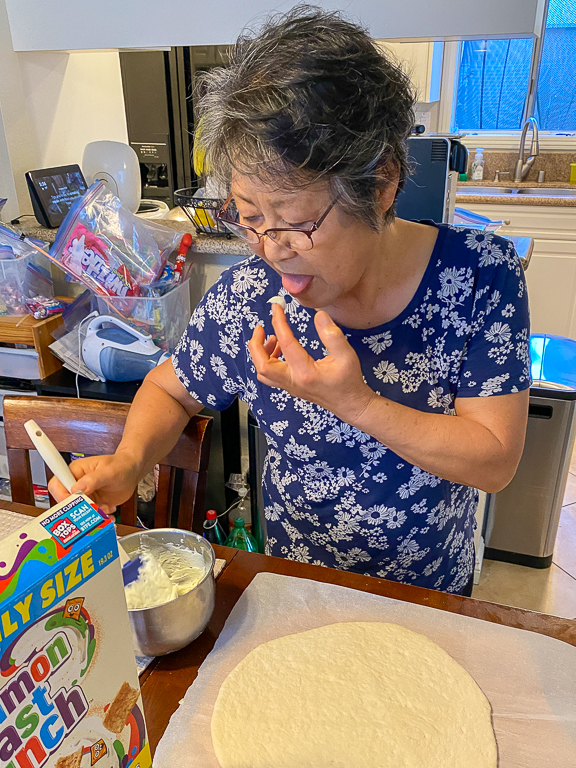 My Cocoa Pebbles pizza was made similarly to the Froot Loops version. 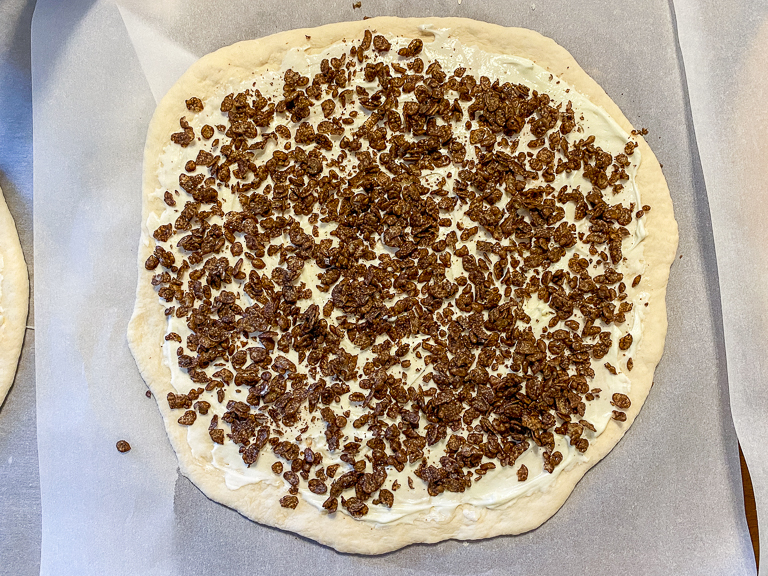 As was the Cinnamon Toast Crunch version. Can't forget to top both of those with cheese. 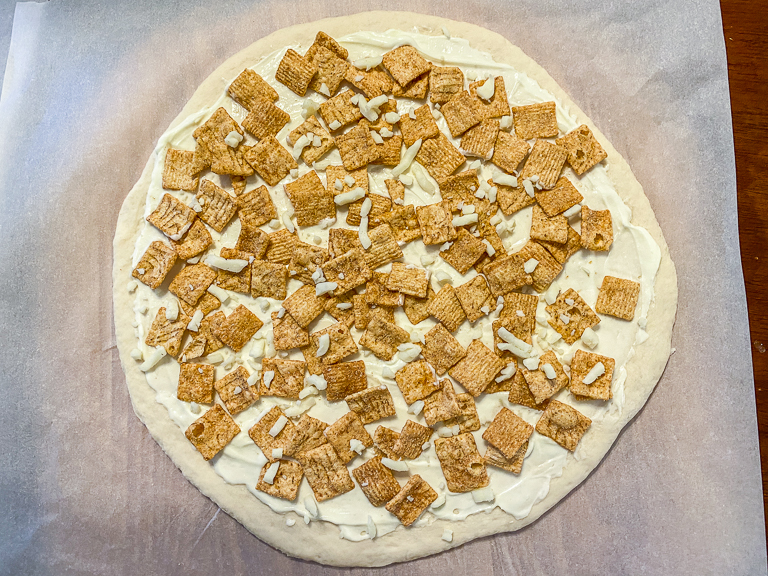 All prepped and ready for the oven. That's a good looking batch of cereal pizzas, if I do say so myself. 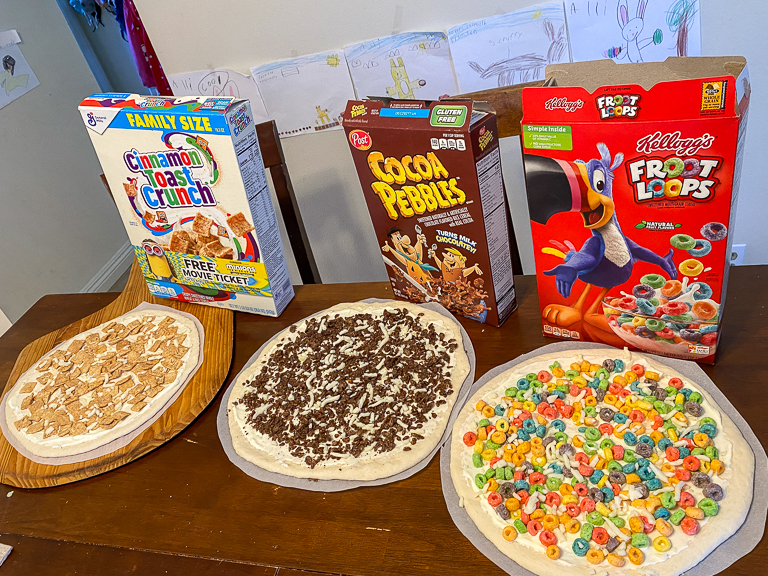 I need a bigger oven and more pizza stones. These thin crust pizzas cooked for about 10 minutes. 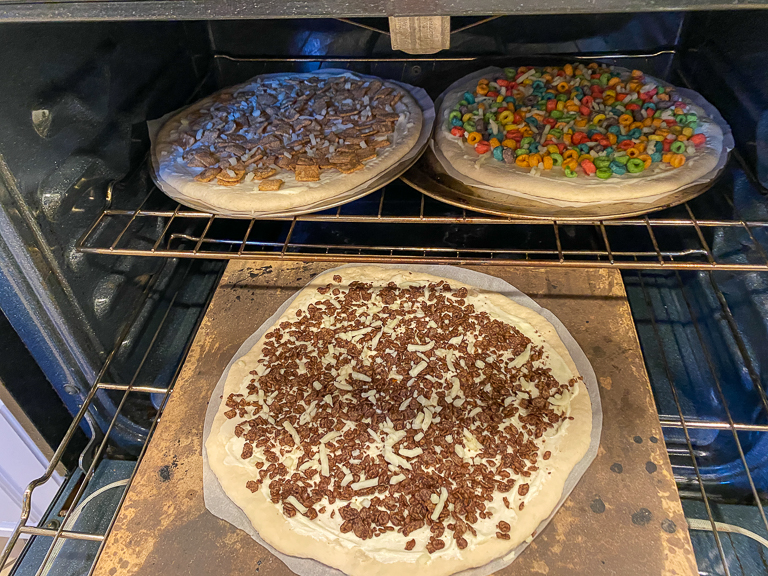 Alli wanted to know what was smelling so good. Indeed, while they were cooking, the first thing I started smelling was the cinnamon from the Cinnamon Toast Crunch. As they baked longer, the chocolately smells from the Cocoa Pebbles started to win out. 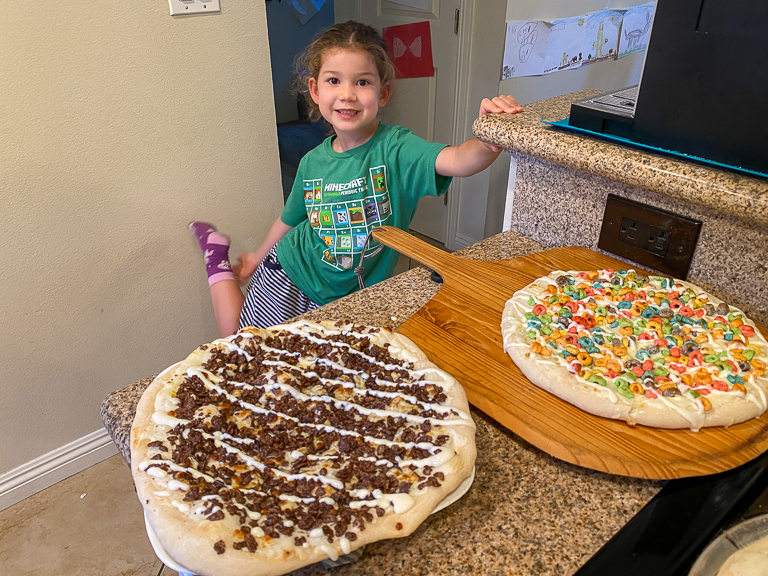 And now it's time to eat them! Oh boy, someone sure is excited! 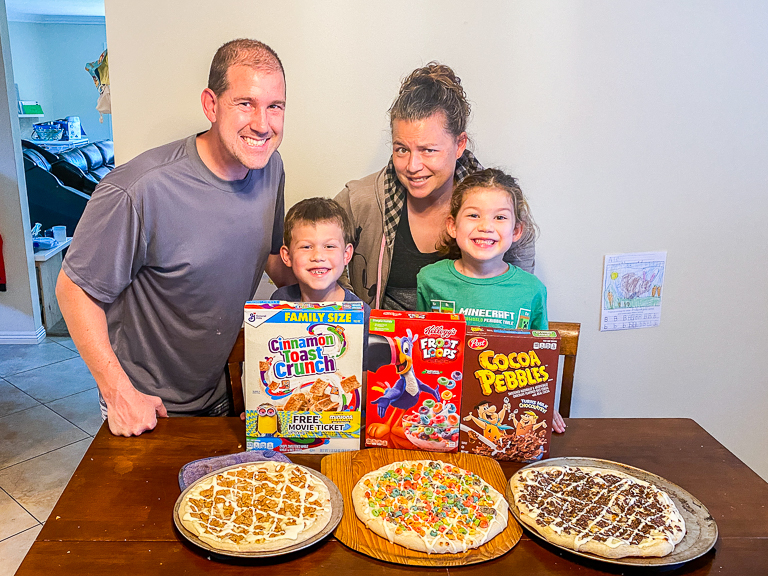 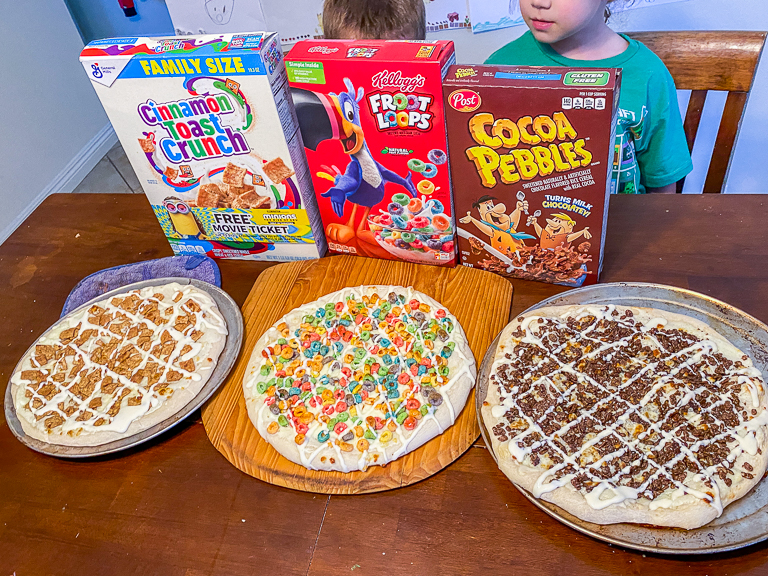 They need names. Anyone have any good suggestions? 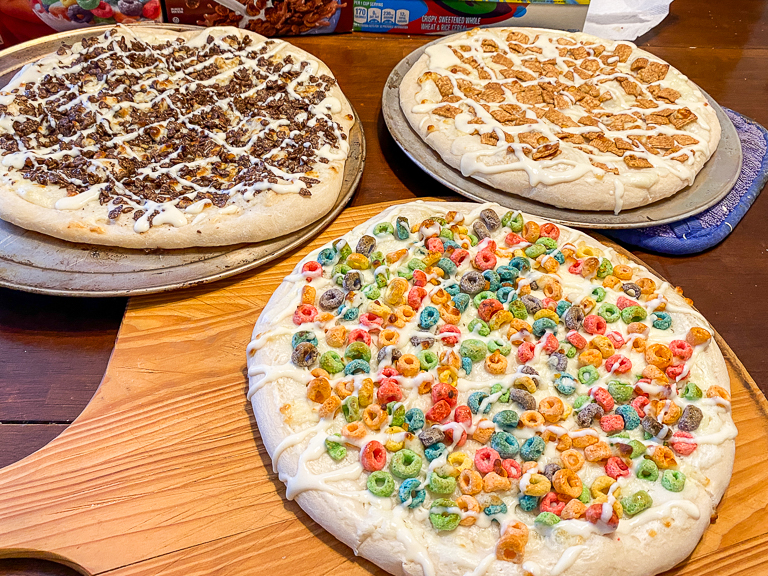 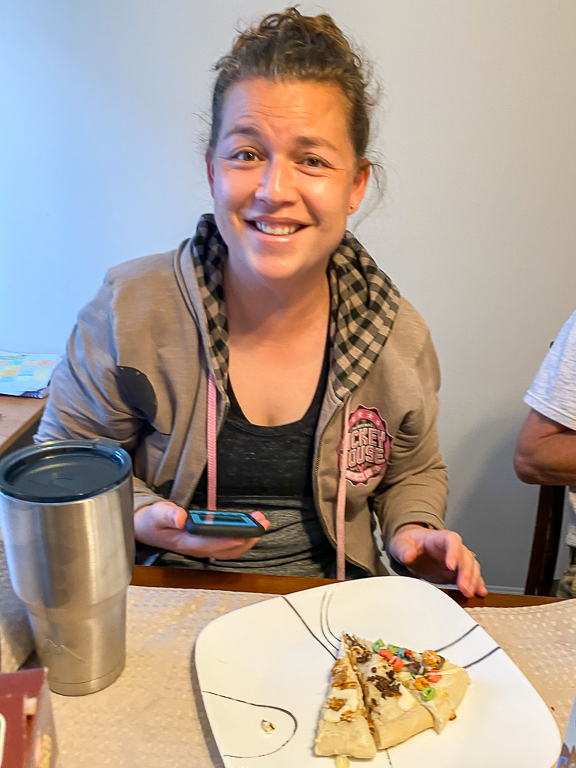 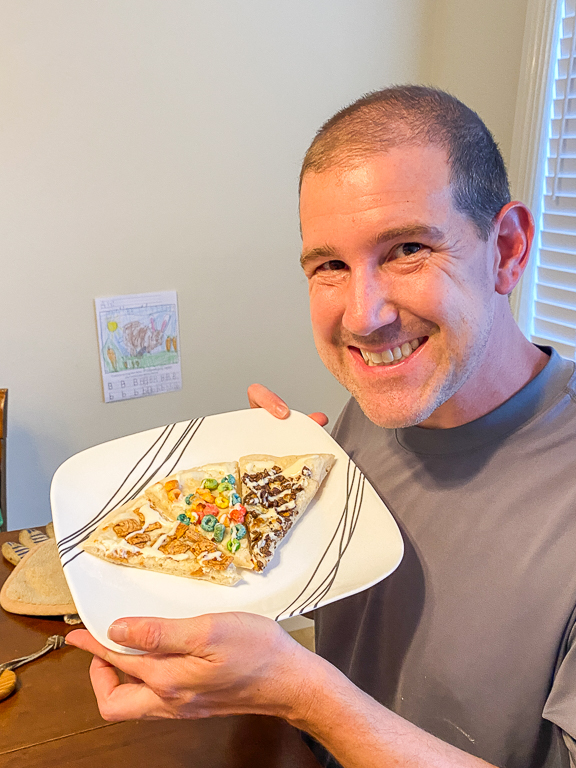 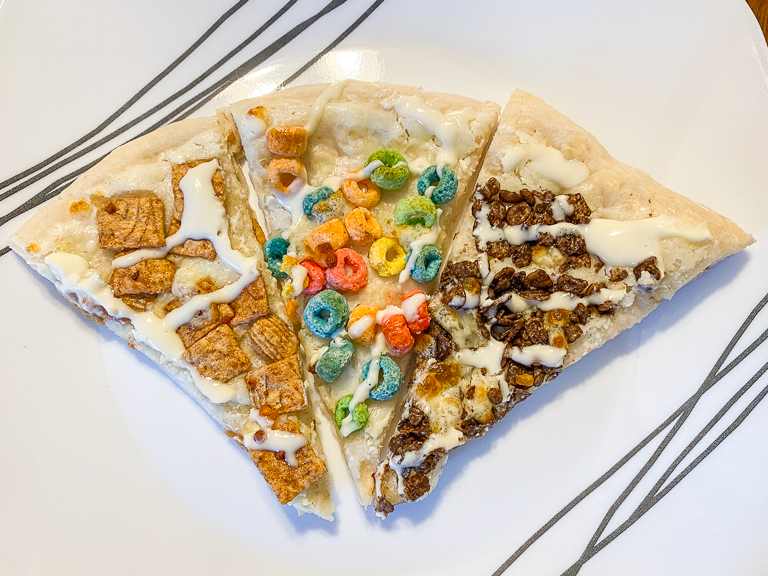 I've never tried the original Fong's Pizza, but if I'm ever in the area I'll by stopping by for sure. I don't have a basis for what this should taste like, but here's how it turned out for us.
Froot Loops Pizza - For some reason, the cereal seems to have steamed in the oven and gotten soggy. I totally should have added more crunchy cereal on top after baking. I get the idea. It would have been better crunchy. 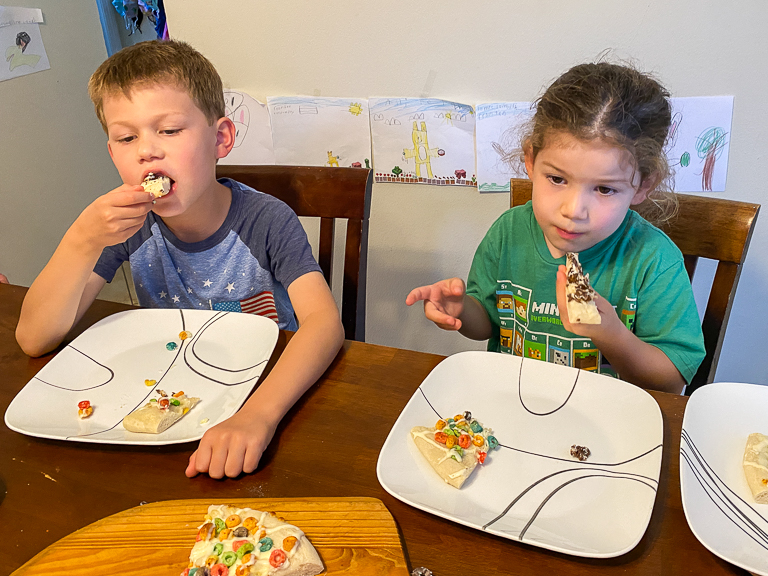 Cocoa Pebbles Pizza - The cereal on this pizza stayed crunchy. The chocolately pieces mixed very well with the creaminess and tanginess of the other sauces. This was a favorite for many.
Cinnamon Toast Crunch Pizza - The pieces of cereal also stayed crunchy. The complaint on this one was that I didn't put enough cereal on it. I loved the cinnamon flavor mixed with everything else. This one was my favorite.
And as far as the mozzarella cheese? You really couldn't taste it. It blended in with everything else, and while it might sound weird to have it on a cereal pizza, it didn't detract from the flavor. 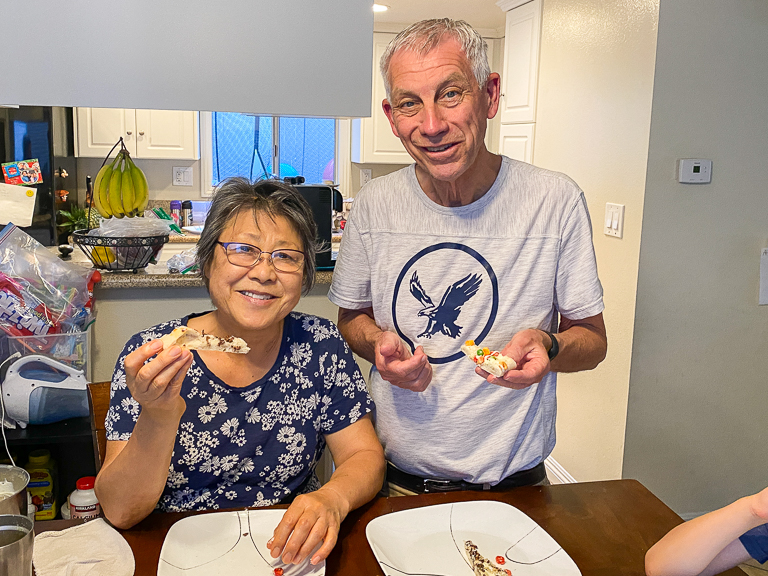 Chi's favorite is the sweet cream cheese base. 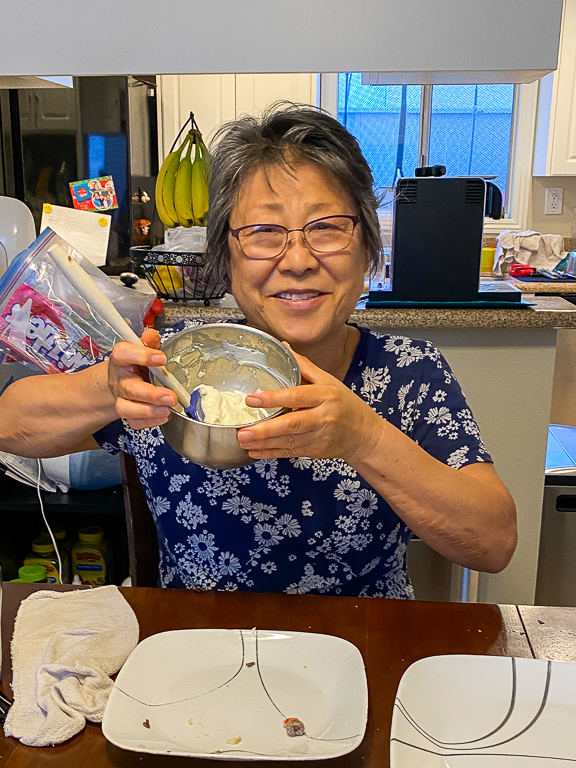 What's this? Going back in for a second piece? 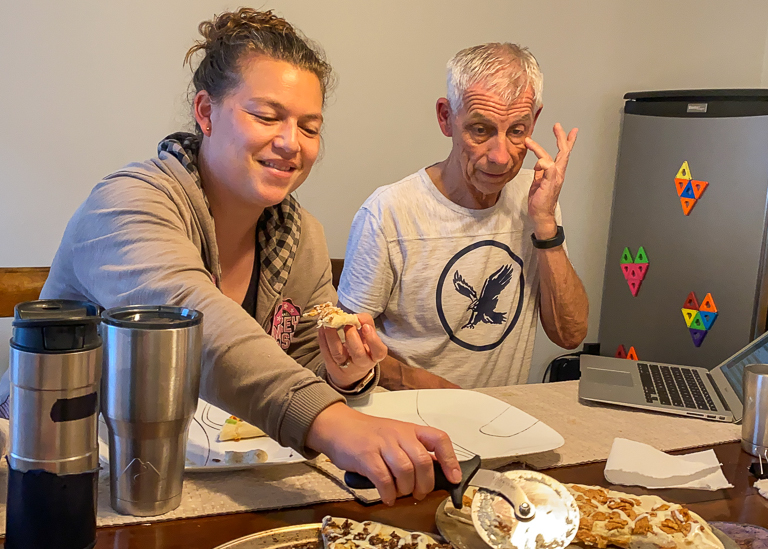 Well would you look at that? More people going back for more.
Cereal pizza may sound a bit odd, but for a dessert pizza we think it actually turned out to be pretty good! These three pizzas are definitely high on the list of "odd" pizzas I've made. Right up there with the Pumpkin Pizza, Thanksgiving Pizza, and Black Eyed Pea Pizza, 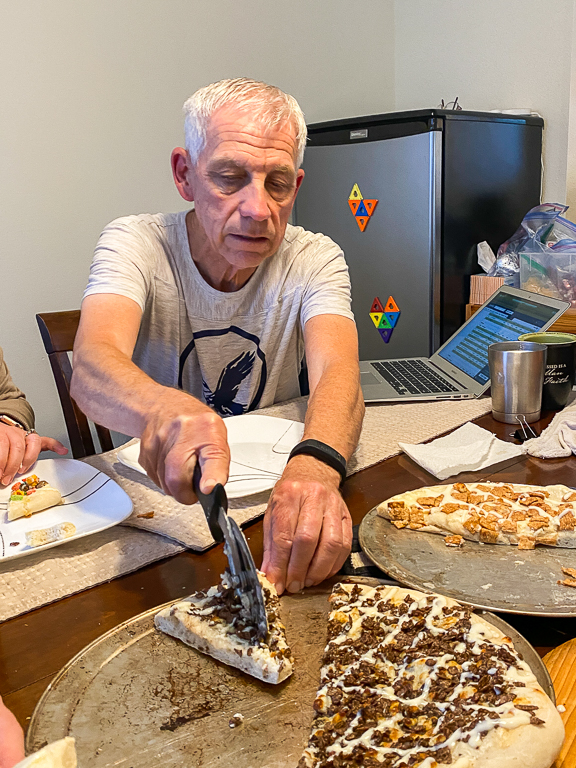